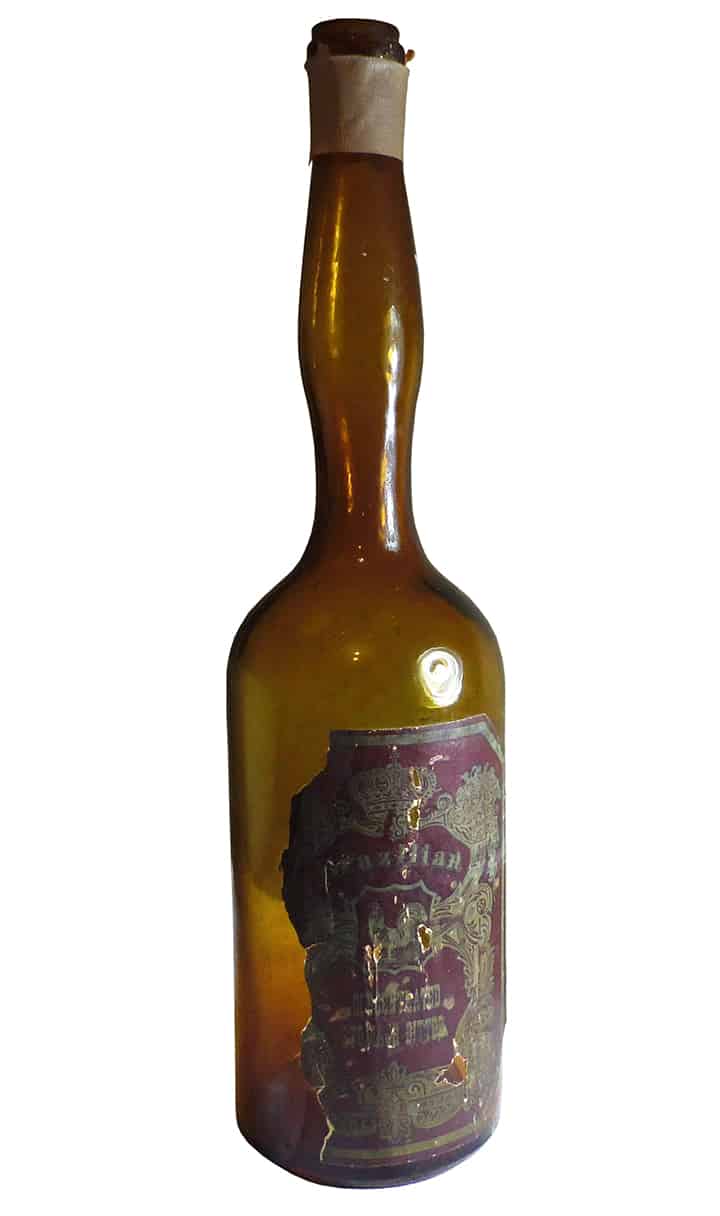 Well, it looks like we can finally put to bed where the unlisted Lancaster Tonic Bitters was made (Read: Unlisted Lancaster Tonic Bitters Found). I have what might be the only known example that I picked up years ago from Greg Bair. Ruling out Lancaster, Pennsylvania, I leaned to New York. I was wrong, This bitters is from Boston, Massachusetts. The clue came in the following e-mail:

Hi Ferdinand…First of all…I love your site…a wealth of information that I refer to frequently. I recently picked up a Brazilian Stomach Bitters bottle (see above) with label and base embossed “THOS G. GERRISH rooster TRADEMARK. The label is not in great shape but does say Brazilian Concentrated Stomach Bitters. While researching, I found an early advertisement (see below) that connected Thomas Gerrish, of Lowell, Mass. with Lancaster Tonic Bitters and Brazilian Stomach Bitter. I was at the bottle show in Mass yesterday and spoke to Greg Bair…he had not acquired any further info on the Lancaster bottle that he sold to you some time ago. I saw your inquiry so just passing this info along…regards – Wendy Kelly 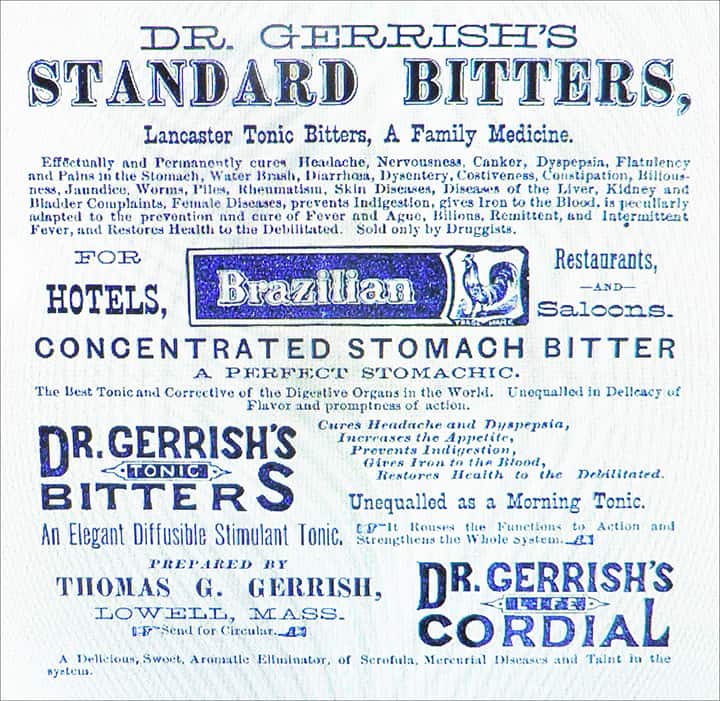 So there we go. I couple quick searches reveals the following 1875 advertisement below for Lancaster Tonic Bitters. Pay special attention to the enlarged Capital “L” of Lancaster and “S” of Bitters. You will also see the same exaggerated typographic treatment on the actual bottle which is also pictured below. Not conclusive, but pretty darn close. 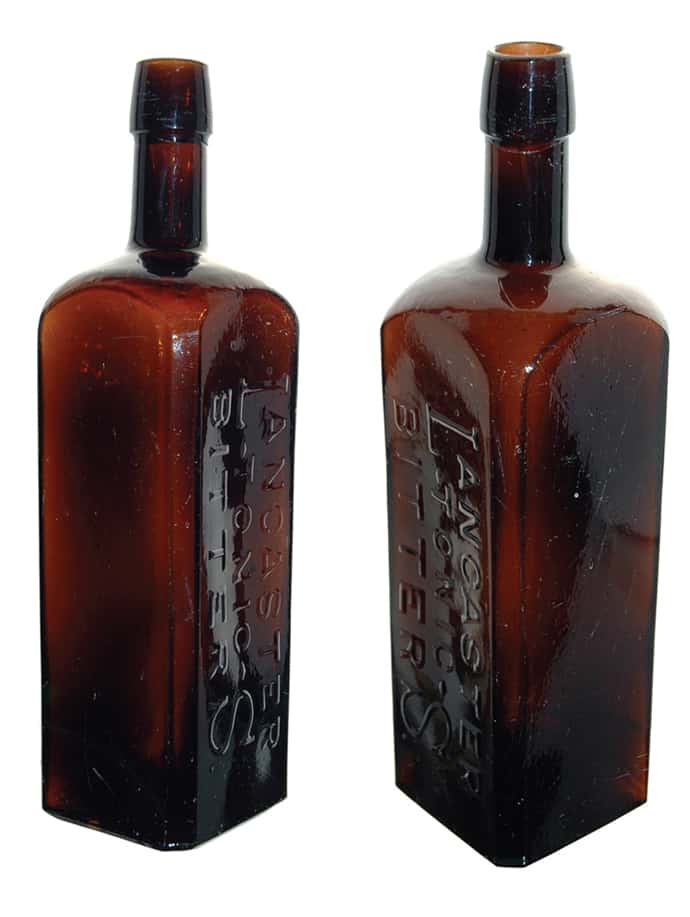 Here are a few more pictures of the Brazilian Concentrated Stomach Bitter which is also unlisted. Yes, there is no “s” in Bitter. Odd. Look at that cool rooster embossed on the bottom of the bottle. Doesn’t get much better than that. The roosters also on the label.

Bill Ham has provided the following number which will be included in Bitters Bottles Supplement 2: 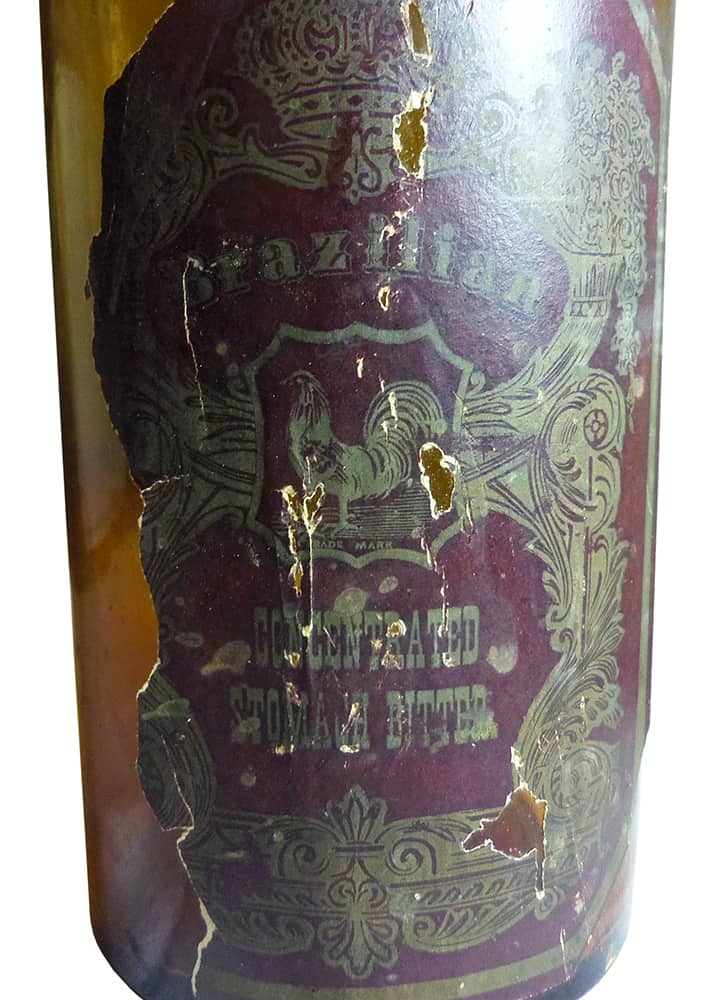 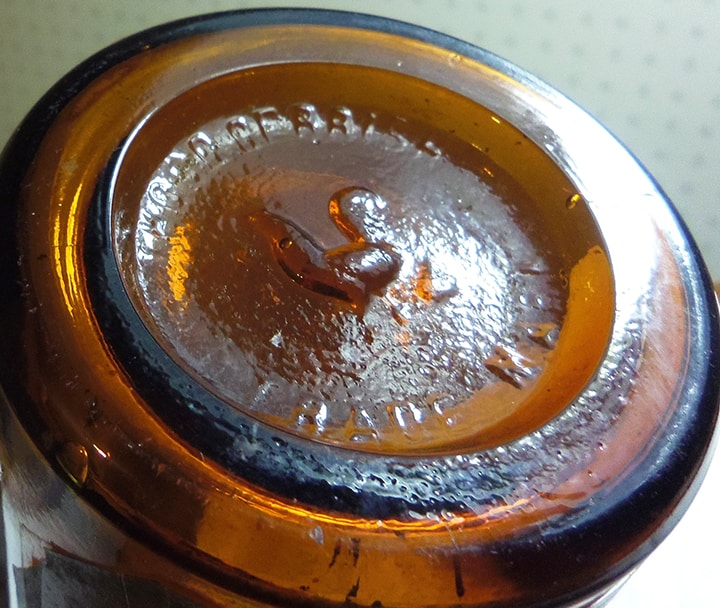 Stay tuned for additions to this post. I am away from my Ring & Ham books as I am in a small dark restaurant in Paducah. Time to find my hotel.

Ferdinand Meyer V is a native of Baltimore, Maryland and has a BFA in Fine Art and Graphic Design from the Kansas City Art Institute and School of Design. Ferdinand is the founding Principal of FMG Design, a nationally recognized design consultation firm. Ferdinand is a passionate collector of American historical glass specializing in bitters bottles, color runs and related classic figural bottles. He is married to Elizabeth Jane Meyer and lives in Houston, Texas with their daughter and three wonderful grandchildren. The Meyers are also very involved in Quarter Horses, antiques and early United States postage stamps. Ferdinand is the past 6-year President of the Federation of Historical Bottle Collectors and is one of the founding members of the FOHBC Virtual Museum.
View all posts by Ferdinand Meyer V →
This entry was posted in Advertising, Bitters, Cordial, History, Tonics and tagged Bair, bitters, Boston, Brazilian, Cordial, Gerrish, lancaster, Lowell, Massachusetts, rooster, Tonic. Bookmark the permalink.