Continuing today with the series of bitters brands with “India” in the name, is another extremely rare bitters from my collection from East Brady (or Bradys Bend), Pennsylvania. Back in 2008, I was fortunate enough to pick up a number of embossed  “Doctor” bitters from the Dr. James Carter collection. One was the Dr. J. W. James India Bitters. 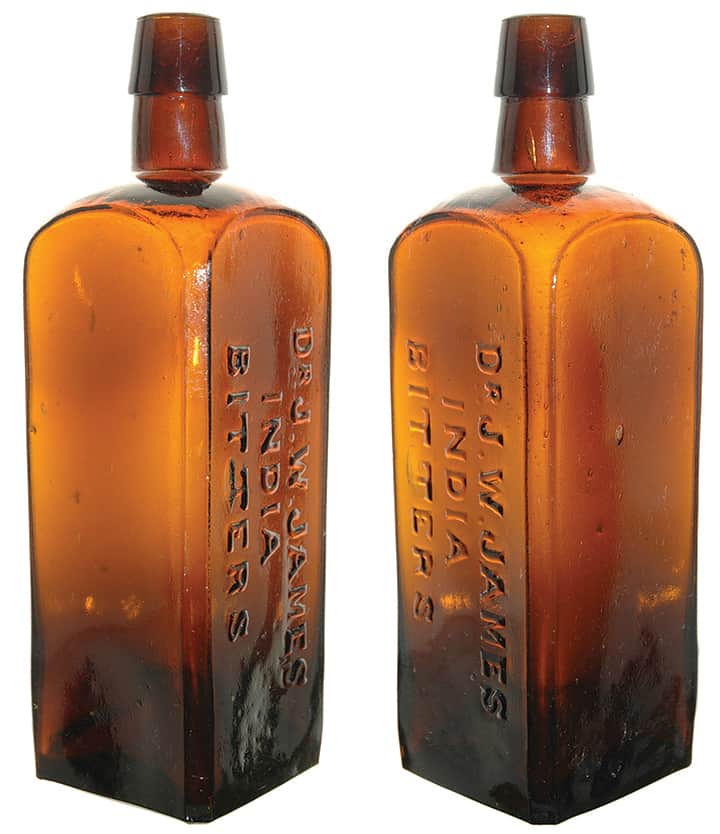 J. W. James M.D., was one of the leading representative men of East Brady, Pennsylvania and was described as courteous, genial and well-informed. East Brady is a bit northeast of Pittsburgh.

Brady’s Bend, also known as Bradys Bend, is named for Captain Samuel Brady (1756-1795), famed frontier scout and the subject of many legends. Near this location on the Allegheny River in Western Pennsylvania June 1779 – in what was then Seneca territory – Brady led a force seeking to redress the killing of a settler and her four children, and the taking of two children as prisoners. The force surrounded a party of seven Indians – apparently both Seneca and Munsee – killing their leader (a Munsee warrior) and freeing the two children. [Wikipedia]

Dr. James was born in Aaronsburg, Centre County, Pennsylvania on 25 February 1826 and belonged to an old Pennsylvania family, his father being James James, a pioneer merchant of Aaronsburg. His mother, who bore the maiden name of Agnes Williamson, was of Scotch ancestry, and was also a representative of a pioneer family from Pennsylvania.

The doctor moved on and acquired his literary education in Millheim, Centre County, and then entered the Jefferson Medical College, of Philadelphia, where he graduated with the class in 1847. Locating in Brady’s Bend, he next successfully engaged in general practice as a physician and surgeon until 1869 when he embarked in the manufacture and proprietor of medicines as president of the J. W. James Medicine Company. Some of his products included Dr. James’ Stillingia or Blood Compound, Dr. James’ Pulmonary Cough Syrup, Dr. James’ Soothing Syrup, Dr. James’ Sugar Worm Powders, Dr. James’ Headache and Liver Pills and Dr. James’ India Bitters. His medicines were very popular throughout the United States, and were touted as being sold from Maine to California. I doubt this, but it is nice to see a doctor who was really a doctor in the bitters marketing world. Much later, in 1890, a trade mark would be applied for the James India Bitters. Probably sold by his son.

In Greenville, Mercer County, Pennsylvania, Dr. James was married to Miss Margaret, daughter of William and Rachel Templeton. The Doctor and his wife were the parents of five children: Ida, William D., a physician and surgeon of East Brady; Robert C., who was employed by Standard Oil Company of Chicago; Emma, wife of John V. Sloan; and Edwin, of East Brady. In politics Dr. James was a Republican, in religious faith he was a Presbyterian and, in his society relations, a Knight of Honor. 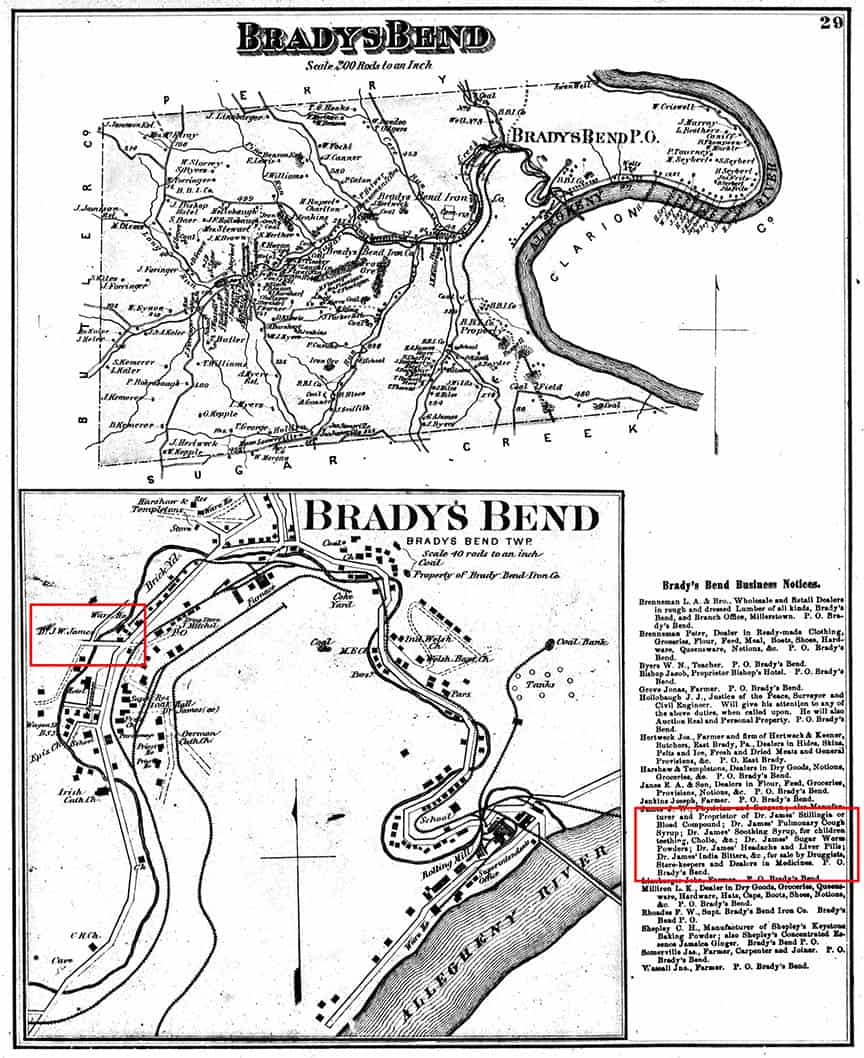 Below is an example of a dug, Dr. J. W. James India Bitters. Read: Bitter January Digs by Jeff Mihalik.

Ferdinand Meyer V is a native of Baltimore, Maryland and has a BFA in Fine Art and Graphic Design from the Kansas City Art Institute and School of Design. Ferdinand is the founding Principal of FMG Design, a nationally recognized design consultation firm. Ferdinand is a passionate collector of American historical glass specializing in bitters bottles, color runs and related classic figural bottles. He is married to Elizabeth Jane Meyer and lives in Houston, Texas with their daughter and three wonderful grandchildren. The Meyers are also very involved in Quarter Horses, antiques and early United States postage stamps. Ferdinand is the past 6-year President of the Federation of Historical Bottle Collectors and is one of the founding members of the FOHBC Virtual Museum.
View all posts by Ferdinand Meyer V →
This entry was posted in Bitters, Digging and Finding, History, Medicines & Cures and tagged Allegheny, bend, Brady, Doctor, India, James, Medicine, Meyer, Mihalik, Munsee, Pennsylvania, Seneca, surgeon. Bookmark the permalink.