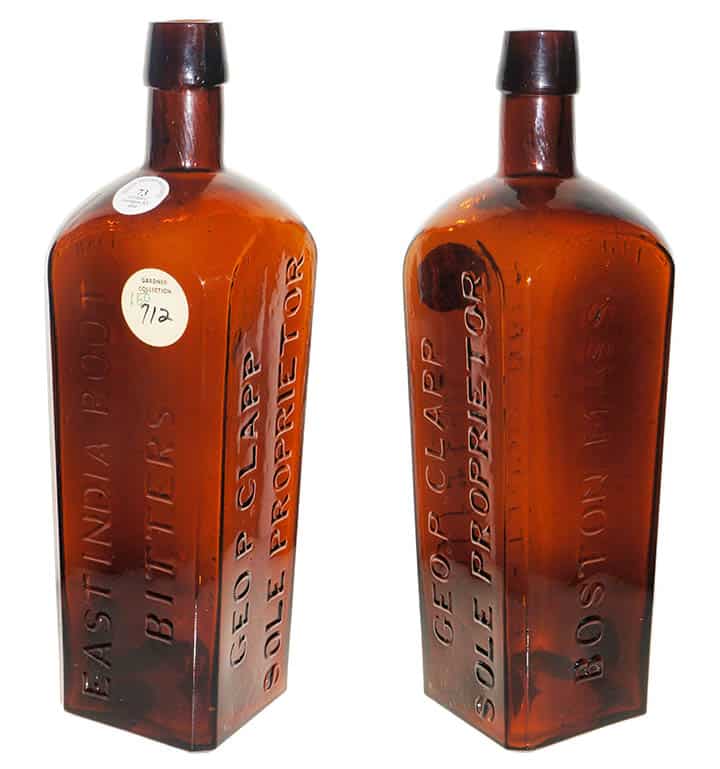 I picked up a good-looking and pretty rare East India Root Bitters, in a tapered, case gin form from Boston, Massachusetts at the recent Lexington National Glass Works “Thoroughbred Auction“. A few people saw me eyeing the bottle and seemed surprised that I did not possess an example. I commented that this bottle was a different brand than the Kennedy’s East India Bitters from Omaha, Nebraska and the Dr. James India Bitters from East Brady, Pennsylvania, both of which I have examples in my collection. This bottle is also exciting in that it has great provenance with applied stickers from the Charles Gardner collection, Judge MacKenzie collection and Paul Hadley collection. 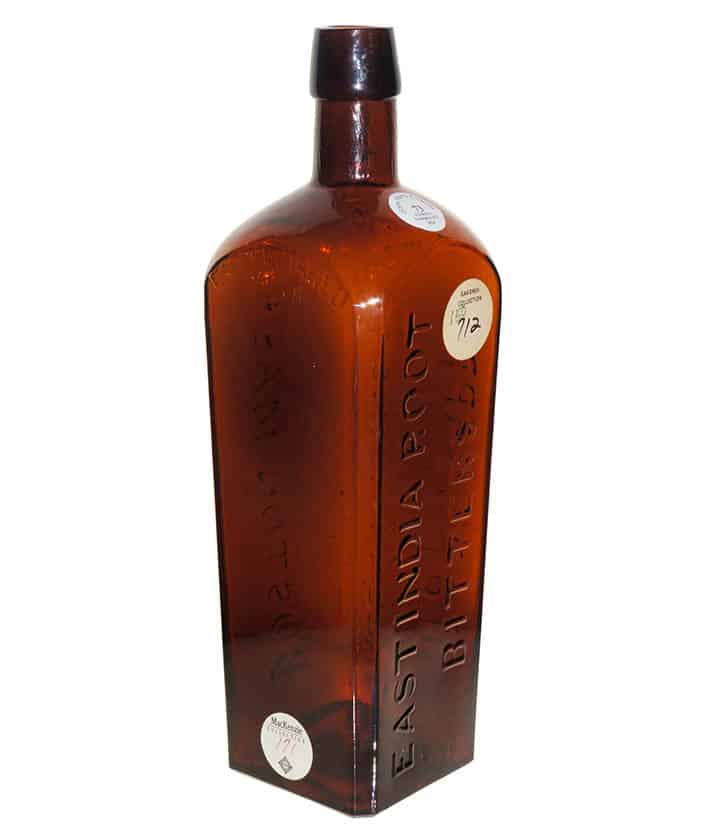 George Pickering Clapp was born on December 02, 1808. His father was Zebulon P. and mother Nancy. George married Mary A. Hawks on June 03, 1833 in Boston, Massachusetts who was the daughter of Joseph Hawks and Hannah Liswell. Clapp was initially a tailor but spent most of his life in the retail liquor business selling wines. He marketed and sold his Celebrated East India Root Bitters from about 1868 to 1871 though he states that the brand was available as early as 1858. “Establish 1858” is embossed on one shoulder of the bottle and also appears on a later patent application. Mr. Clapp was also a prominent member of the Massachusetts legislature, Masons, and Second Methodist Episcopal Church of Boston. Their children were Mary Motley Clapp, George Monroe Clapp, Abba Louise Clapp, and James Liswell Hawks Clapp. George P. Clapp died on August 04, 1872.

There was a Seth E. Clapp who filed for patent for “Root and Herb Bitters” (see below) on 21 April 1874. This is odd as I do not see reference to this product after his George Clapp’s death. There is also a tendency to want to find a relationship to Boston based, Billings, Clapp & Company who were manufacturing chemist and druggists in the 1870s. The partners were C. E. Billings, Albion R. Clapp and C.S. Davis and they have quite a few bottles embossed with Billings, Clapp & Co. As of this moment, I can find no direct link between Geoge P. Clapp and Albion R. Clapp or Seth E. Clapp. There were quite a few ‘Clapp’s” running around the Boston area at that time, many probably related. 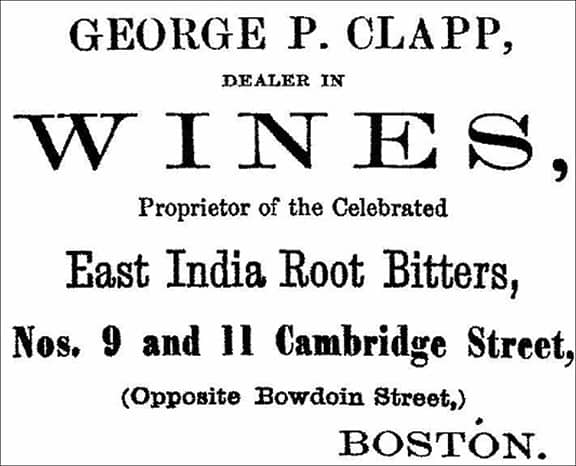 Seth E. Clapp files for Patent for “Root and Herb Bitters” (see above) on 21 April 1874 – The Commissioners of Patents’ Journal

Ferdinand Meyer V is a native of Baltimore, Maryland and has a BFA in Fine Art and Graphic Design from the Kansas City Art Institute and School of Design. Ferdinand is the founding Principal of FMG Design, a nationally recognized design consultation firm. Ferdinand is a passionate collector of American historical glass specializing in bitters bottles, color runs and related classic figural bottles. He is married to Elizabeth Jane Meyer and lives in Houston, Texas with their daughter and three wonderful grandchildren. The Meyers are also very involved in Quarter Horses, antiques and early United States postage stamps. Ferdinand is the past 6-year President of the Federation of Historical Bottle Collectors and is one of the founding members of the FOHBC Virtual Museum.
View all posts by Ferdinand Meyer V →
This entry was posted in Auction News, Bitters, History, Liquor Merchant and tagged bitters, Boston, Clapp, east, Gardner, George, Hadley, India, MacKenzie, Massachusetts, Meyer, Pickering, Root. Bookmark the permalink.