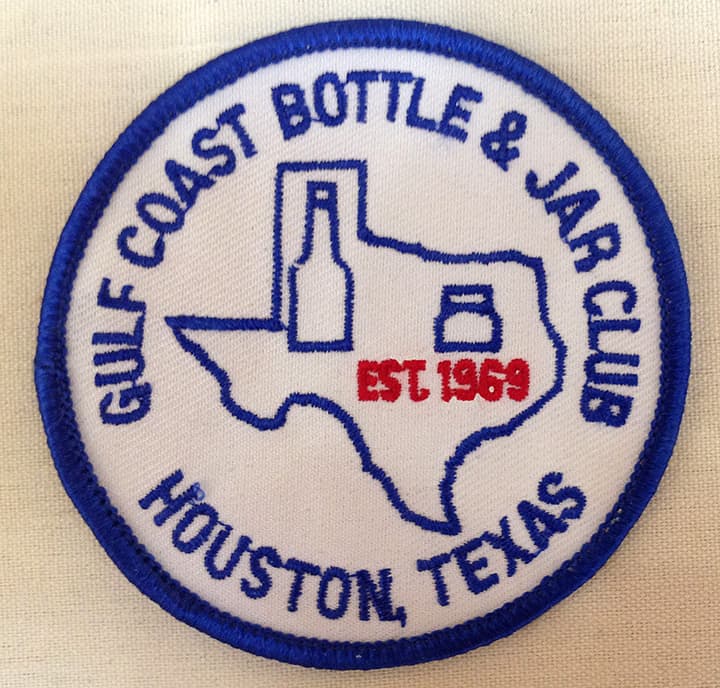 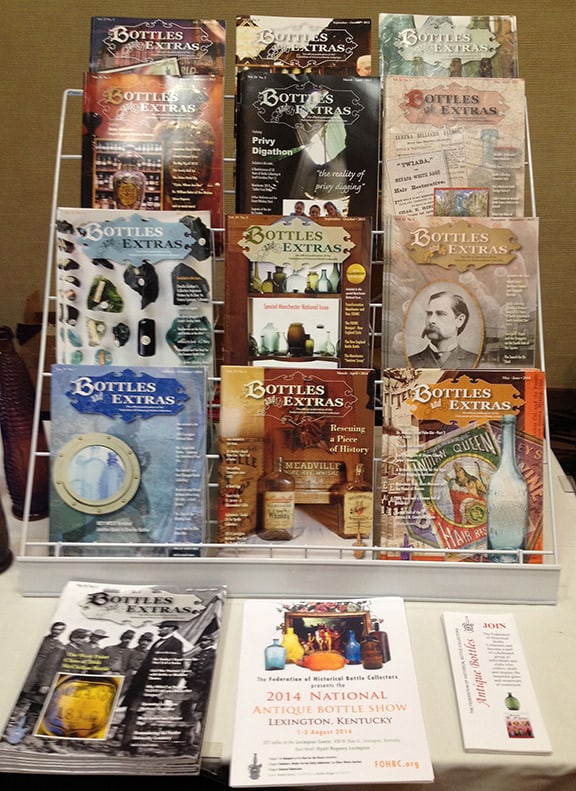 This years Houston Antique Bottles, Advertising & Collectibles Show and Sale served as a warm-up for me as the FOHBC Lexington National is in less than two weeks. This past Saturday, I had my two tables in the corner of the Crown Plaza Hotel ballroom and was hooked up to power my lap top and light table. I wanted to sell FOHBC memberships, talk bitters, take pictures and support the effort. I missed Friday evening set-up and early bird but heard that the action was intense as a collection of Galveston and other Texas bottles showed up. Special thanks to Barbara Puckett and Dan Cowman for renewing their Fed memberships and to new members, Buster Toland, Will Meysing and Jacqueline Falls. 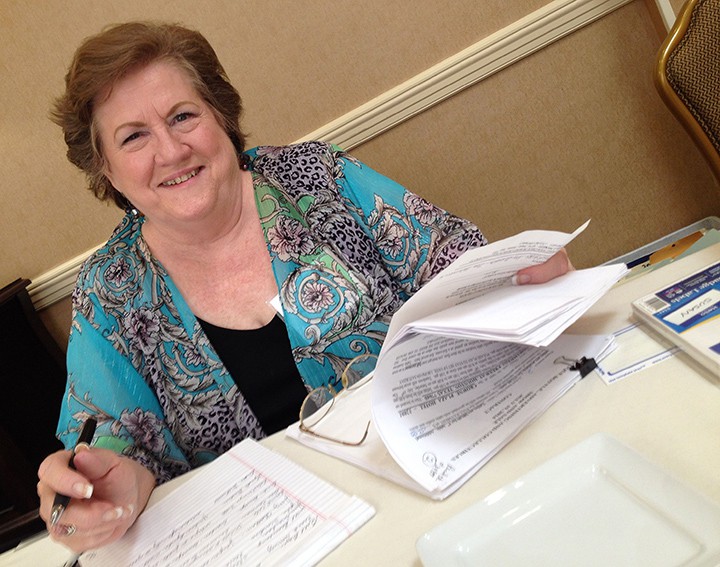 The Gulf Coast Bottle and Jar Club was established in Houston, Texas in 1969 as you can see from the patch pictured at the top of the post which was provided to me by Barbara Puckett, the show organizer. Barbara puts on this show every year with her helpers, Kacey Puckett and Tricia McDonald (pictured below) and she looks younger and younger every time I see her. Someone told me that she was there in the early years of the club but I find that hard to believe unless she was a child. Maybe at some point I can interview her and write some type of “History of the Houston Club” before it is all forgotten. There is no club here anymore. I heard it was once robust and a great group of collectors. Time and distance have made forming a new club nearly impossible. 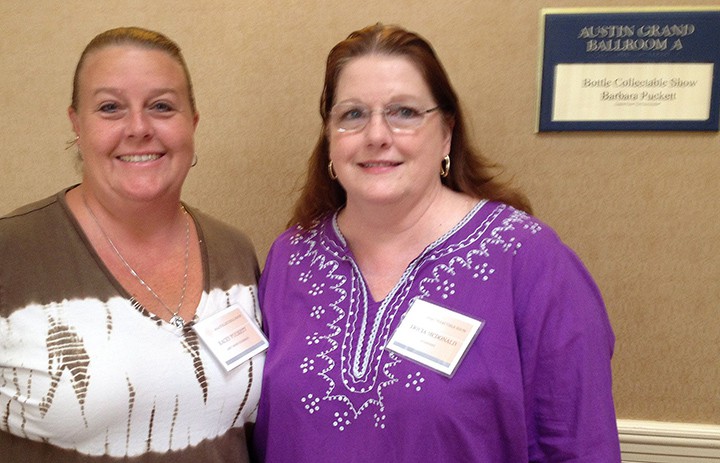 I guess the first person I saw was prominent Texas collector, Brad Seigler who seemed everywhere with new purchases and cool things to show me. He had this neat picture of a lady and a baby posing in front of jars and bottles in Bulloch County (thinking Georgia here). Next he had this super beer bottle with an embossed lighthouse. He picked that up at the feeding frenzy Friday night and turned it around making a profit. He regretted selling the bottle so quickly but he is getting married soon in the Florida Keys. I can understand his position. 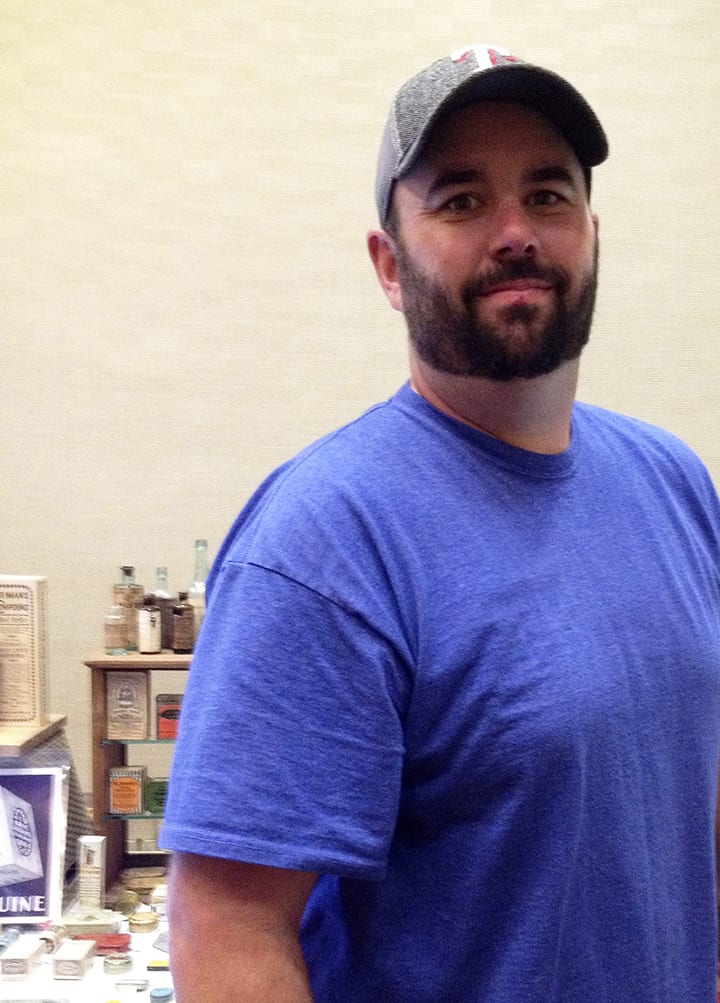 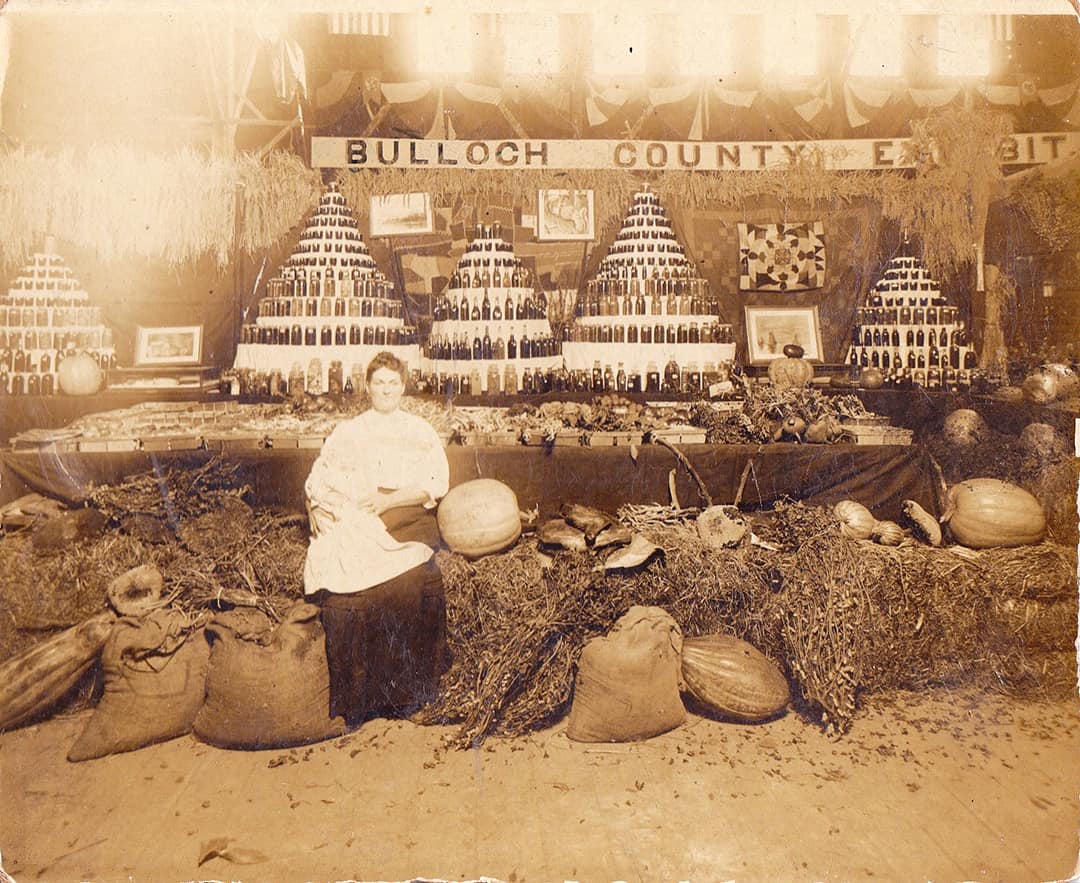 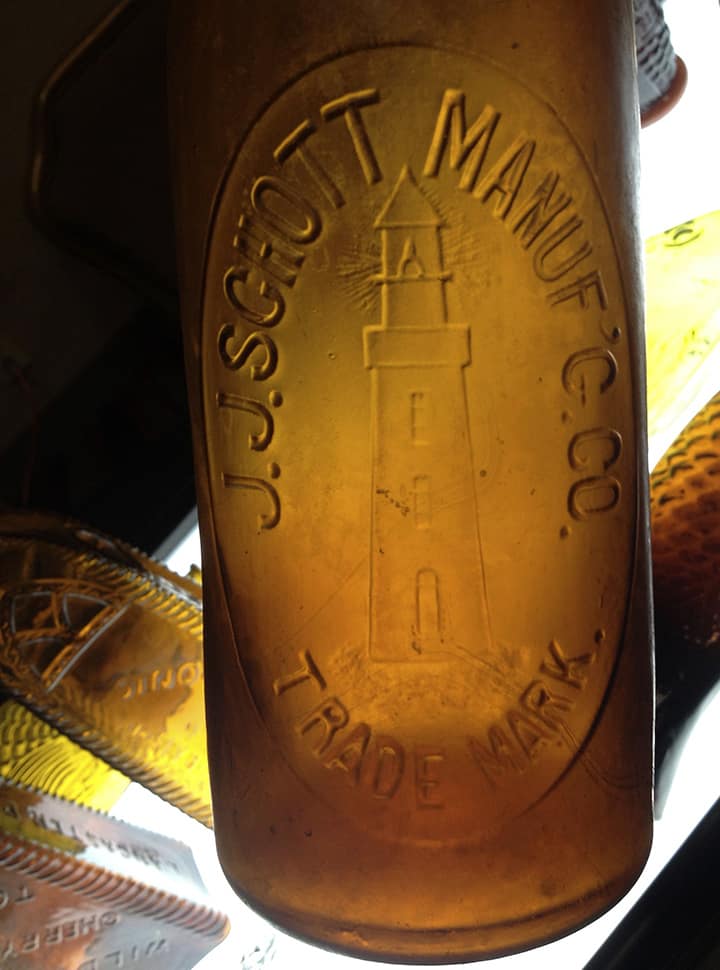 As I mentioned, I fooled around with a few of my bottles on my light table trying to get some fun color arrangements. Read: Corn n’ Fish at the 2014 Houston Antique Bottle Show. 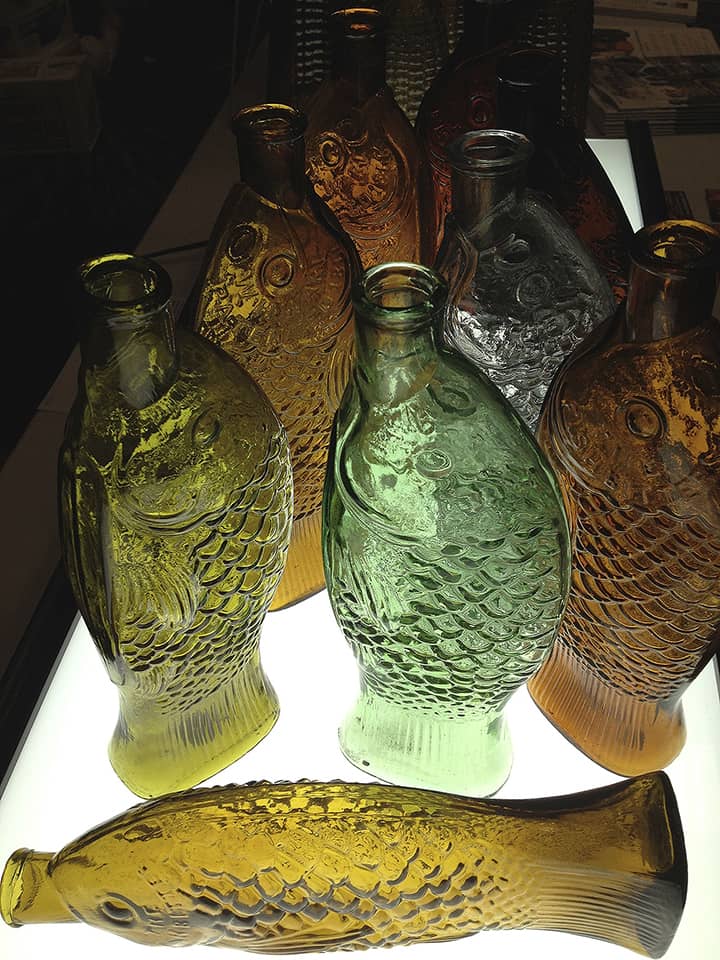 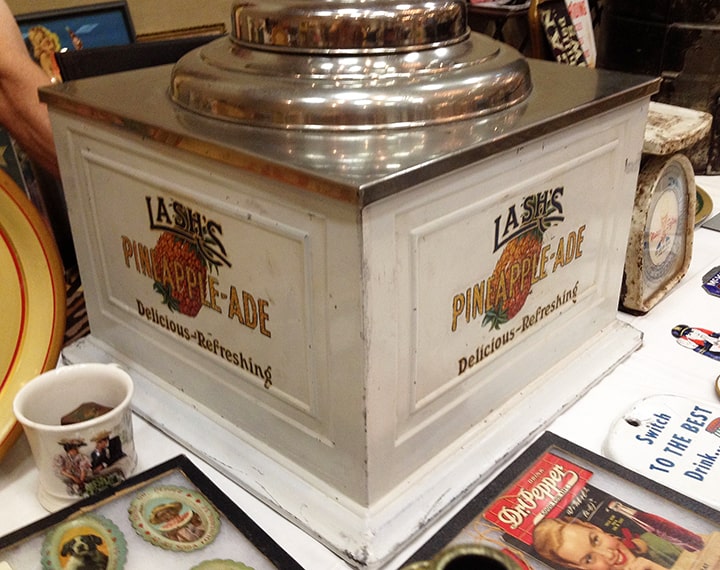 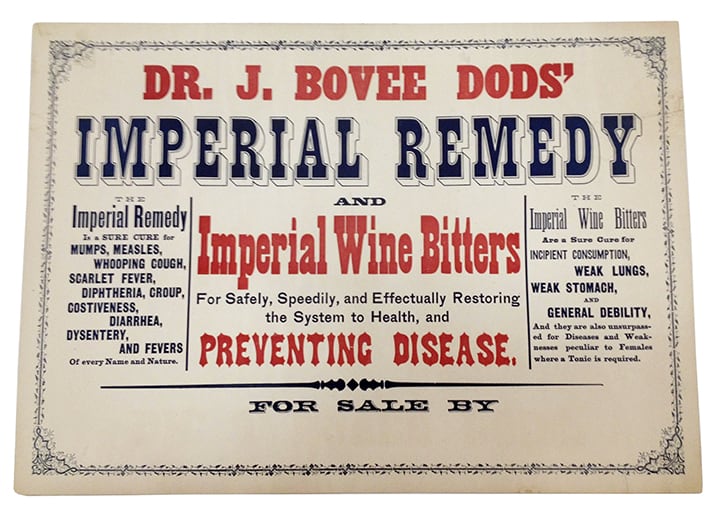 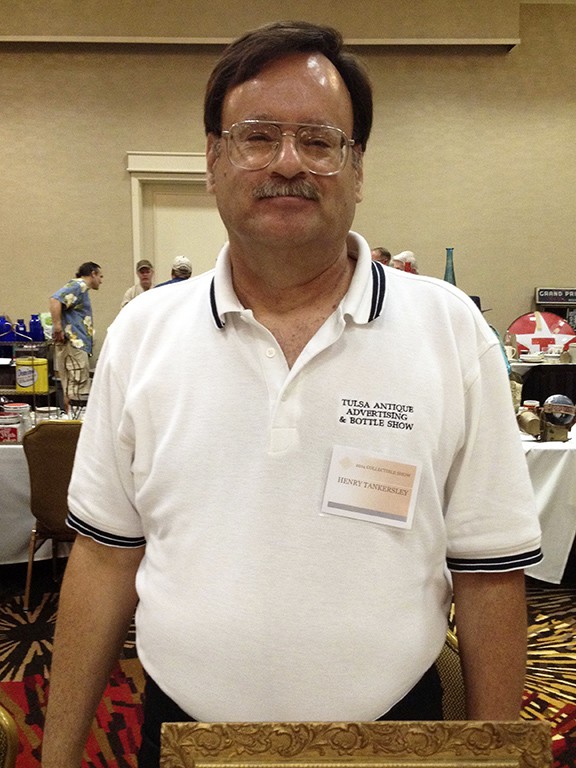 Big-time labeled medicine and ephemera collector Dan Cowman was there after missing last year. Dan always has the best, and I mean best of material that could stand toe-to-toe with any dealer in the country… period. 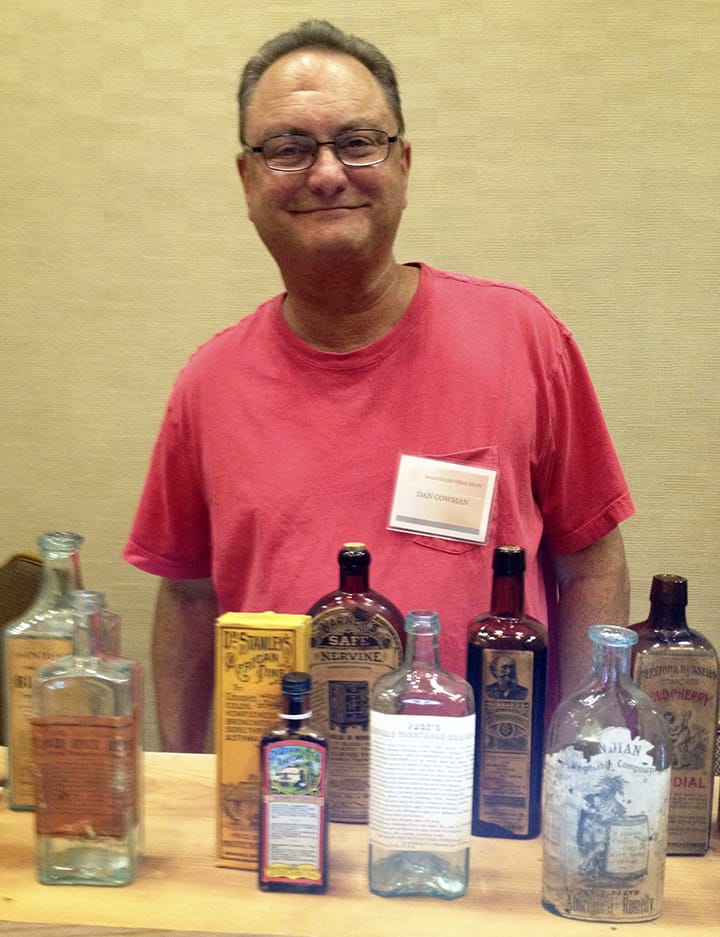 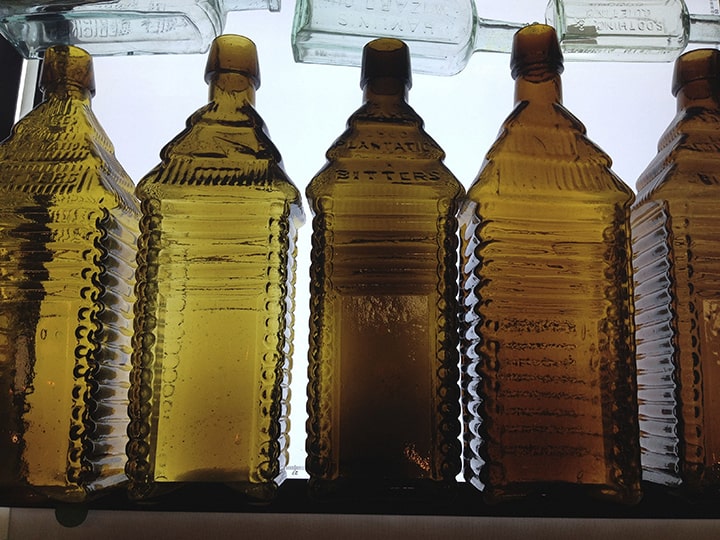 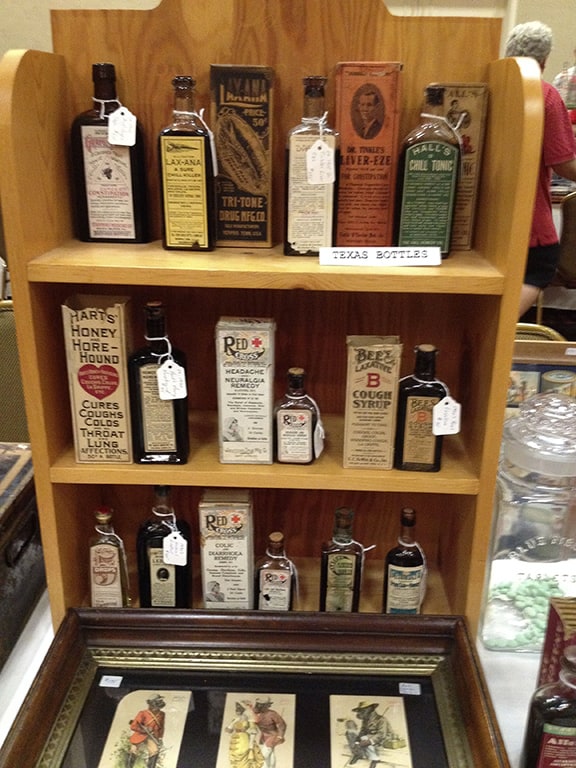 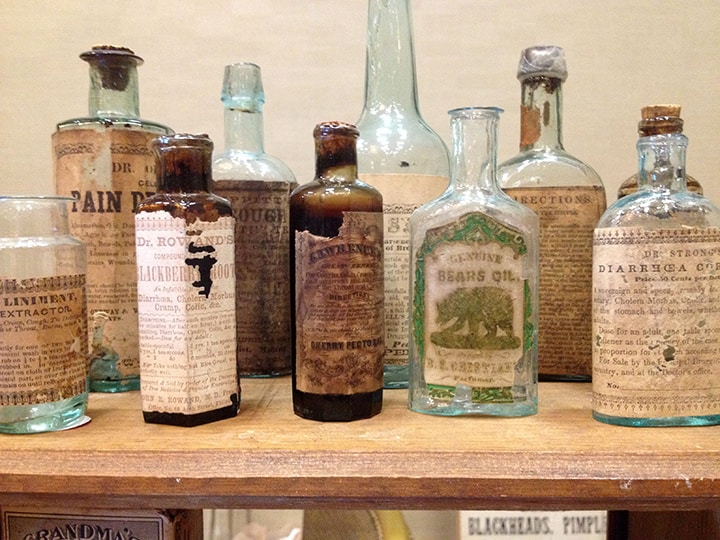 Just a few of the many labeled medicines on Dan Cowman’s table. 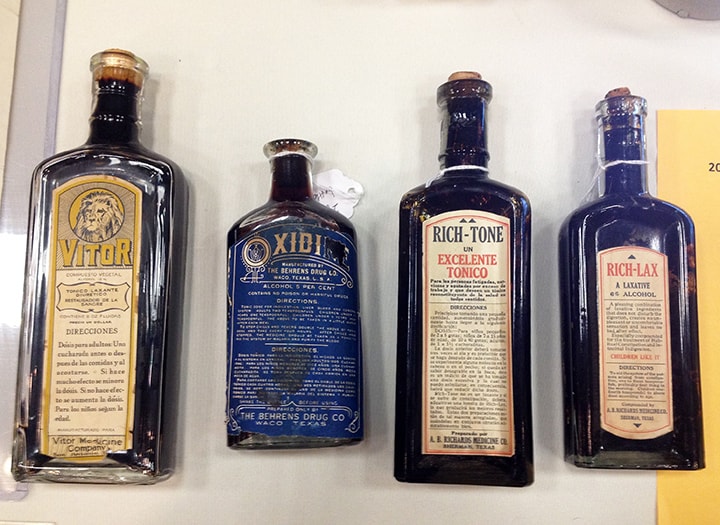 Another big time collector, David Cole was at the show. He had these two neat Coleman’s Concentrated Spring Water bottles that he just picked up. I’ve written about David before. He is definitely on my list to visit and see his collection. Read: Bigger in TEXAS – The Cole Display 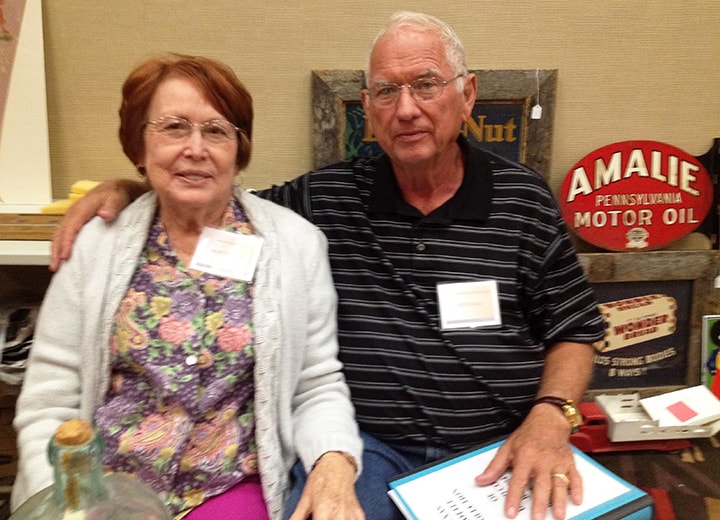 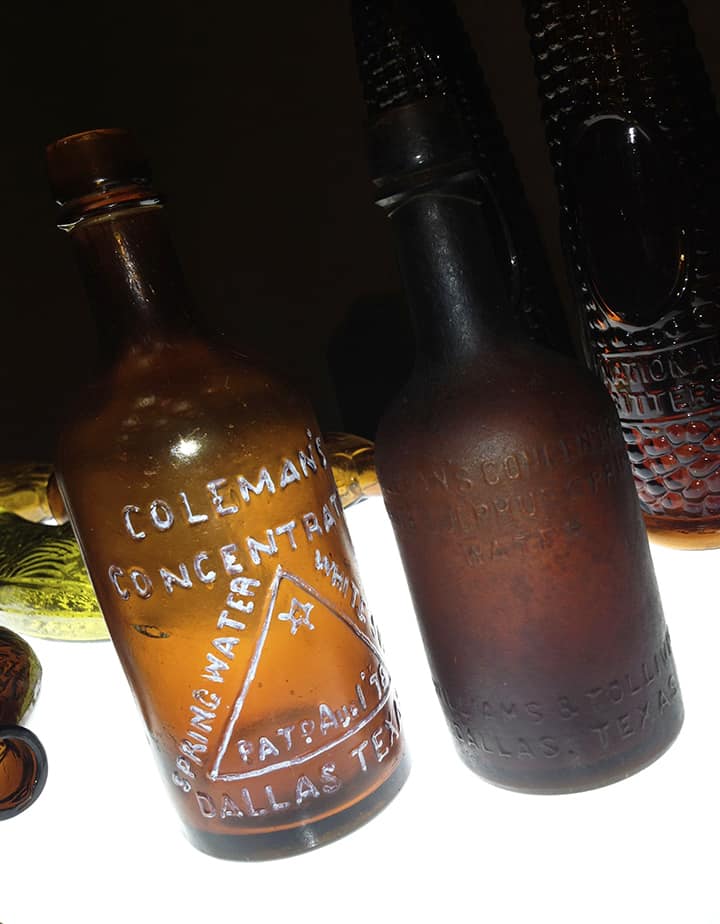 I ran in to Brandon DeWolfe from Spring, Texas who specializes in New Hampshire bottles as he used to live there. Brandon is a frequent contributor to Peachridge Glass. 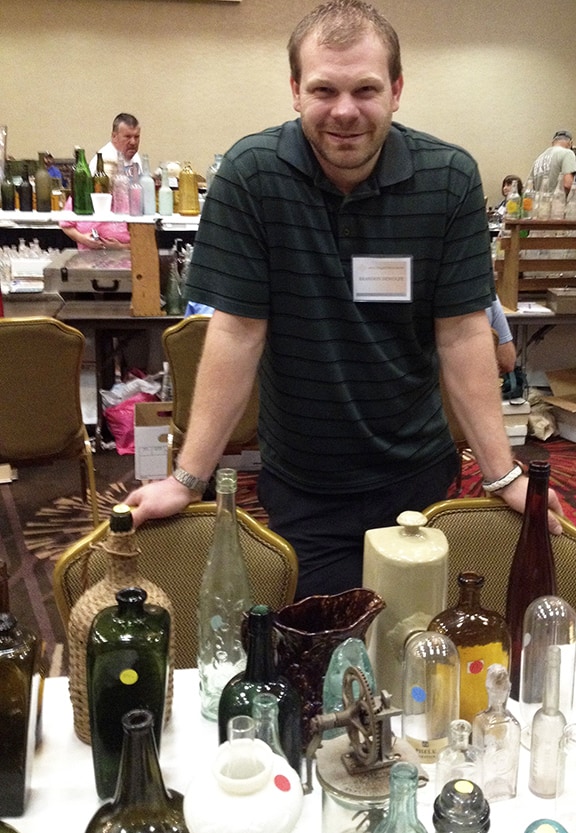 Also nice to chat with Federation member Jay Kasper from Victoria, Texas. We will be seeing Jay at the Lexington National. 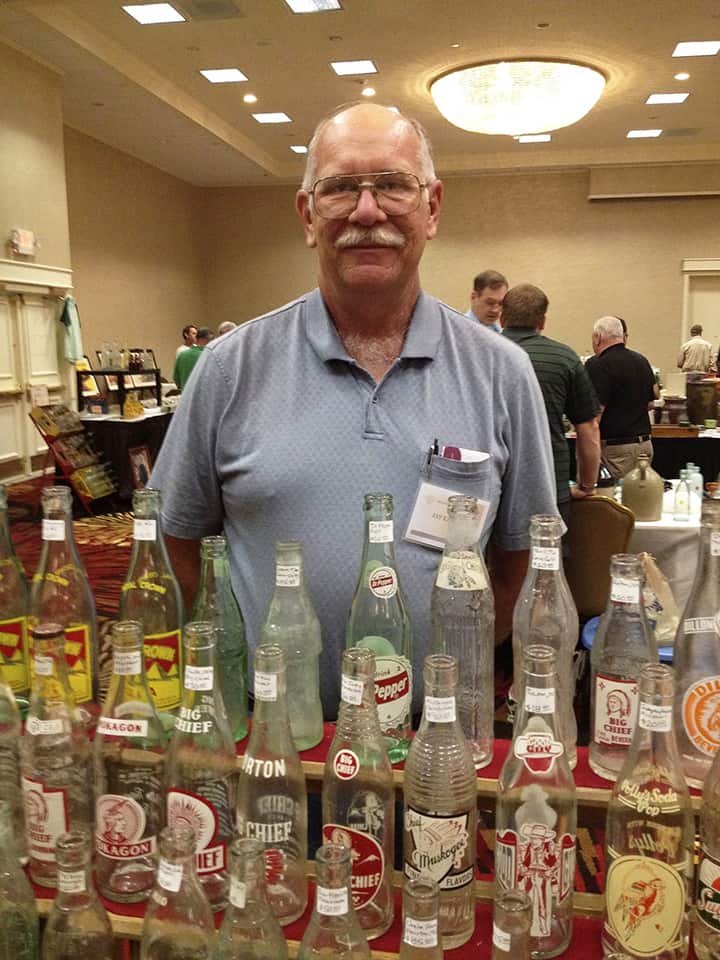 It was also nice to run into and chat with Courtney Frioux from New Orleans. Courtney holds some extremely rare bitters such as the Morison’s Invigorating Bitters, Malakoff Bitters, Aya Pana Bitters, Commander’s Aromatic Bitters, Old Hickory Bitters and the only Prices Aromatic Stomach Bitters. He promised to send pictures so stay tuned.

All-in-all, a nice little show and I had fun. It’s interesting, Earl McIntyre said he had heard from good authority that the FOHBC 2017 National Show was going to be in Houston. I hated to break the bad news to him. Maybe one of these days. I said the Peachridge Glass, “Glass in the Grass” (ala Heckler) event would probably come first. 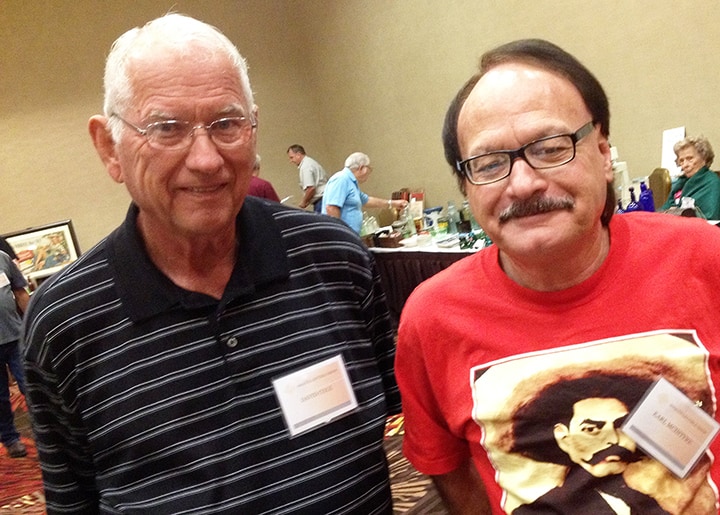 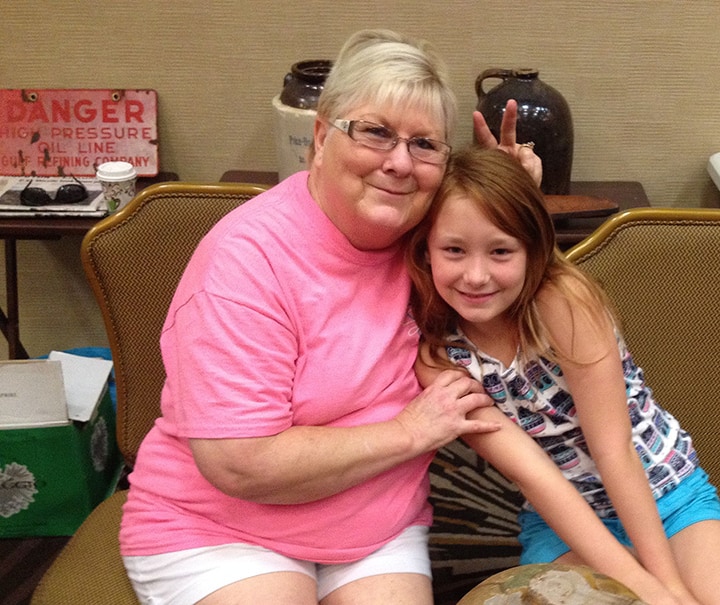 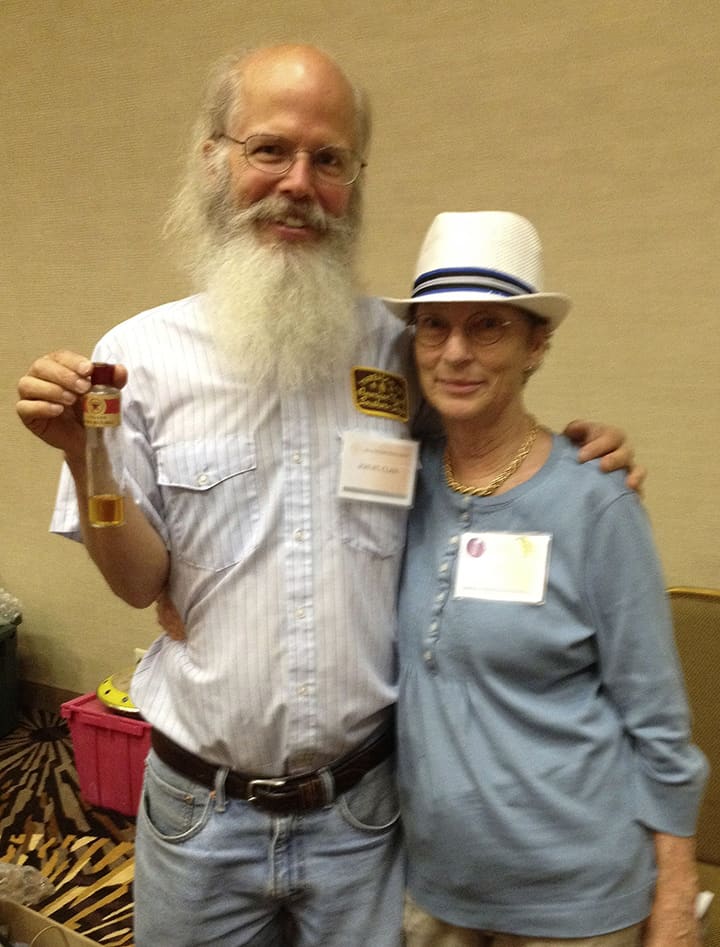 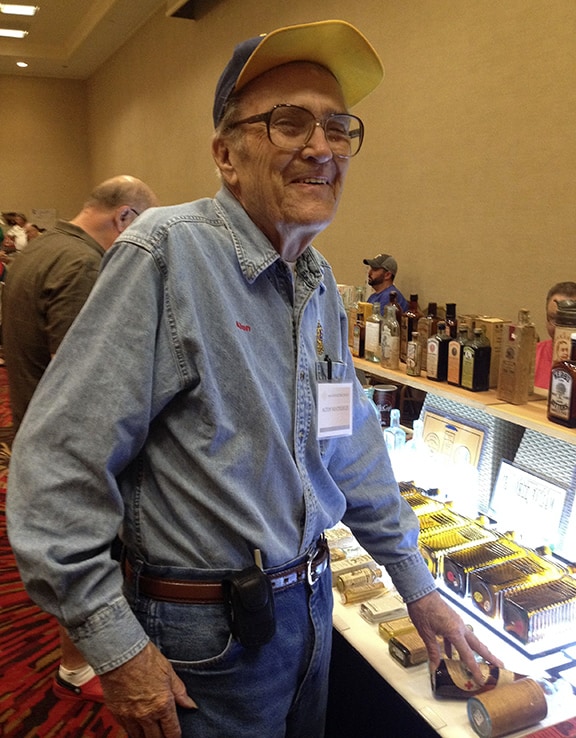 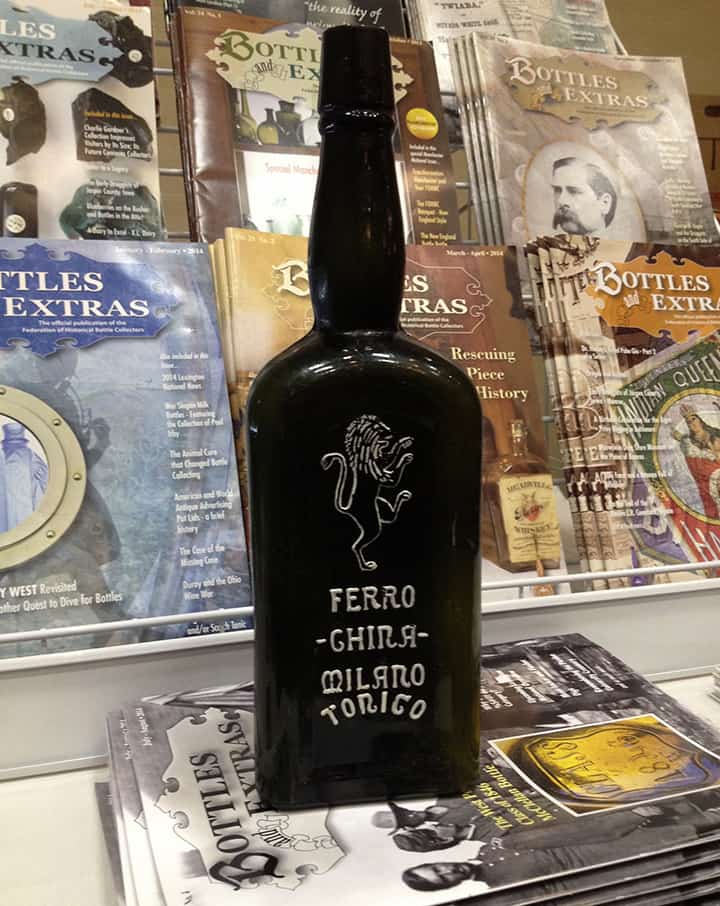 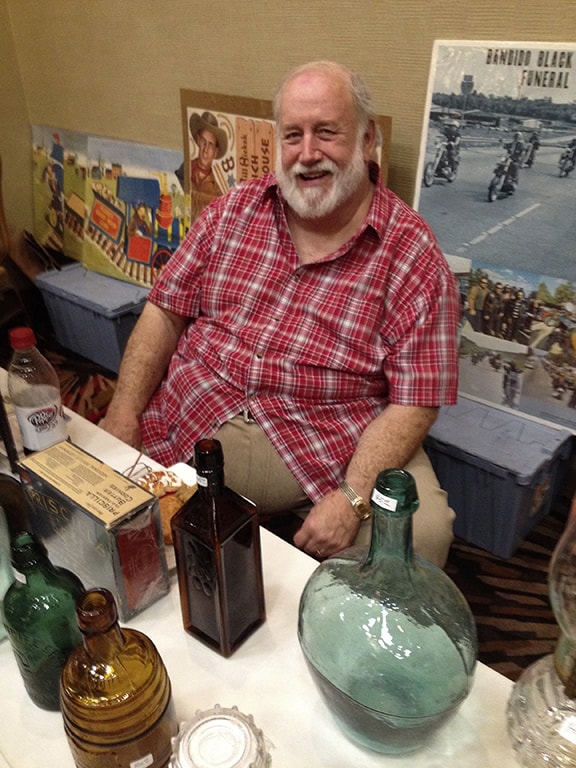 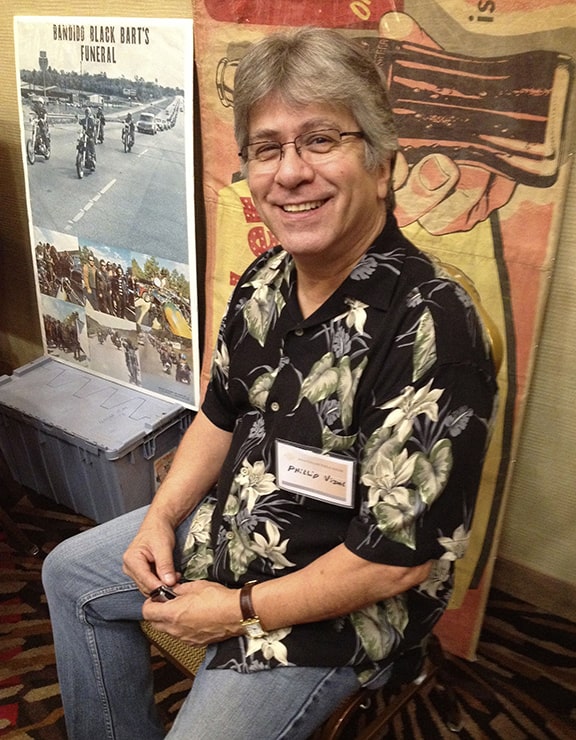 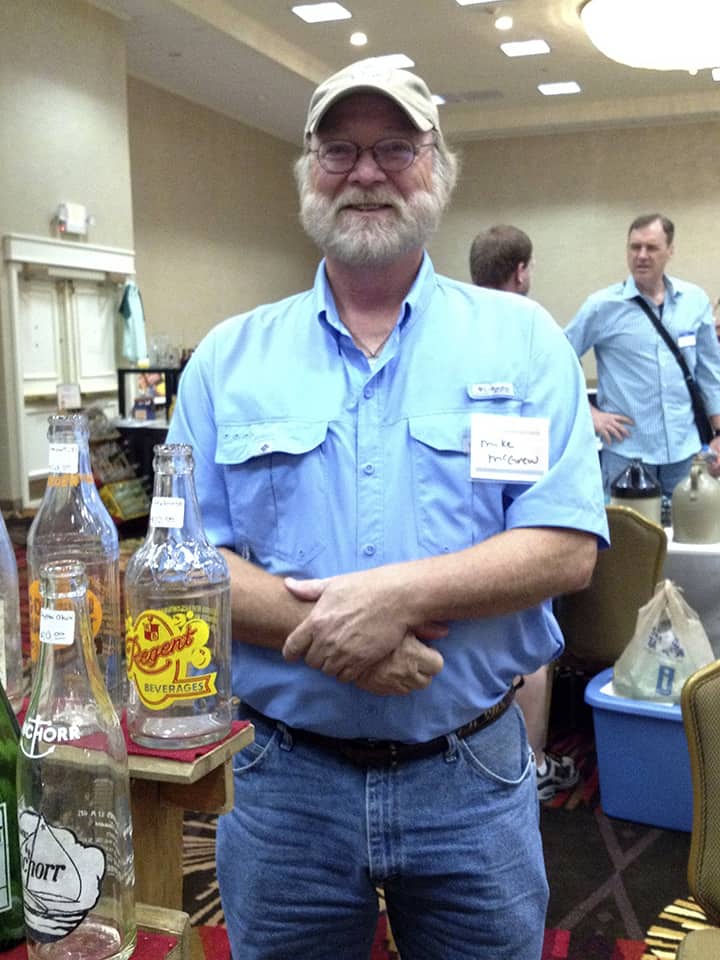 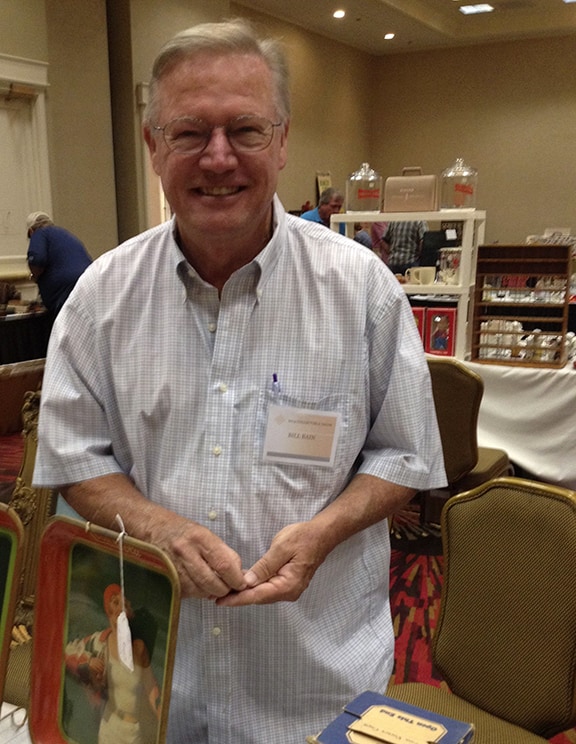 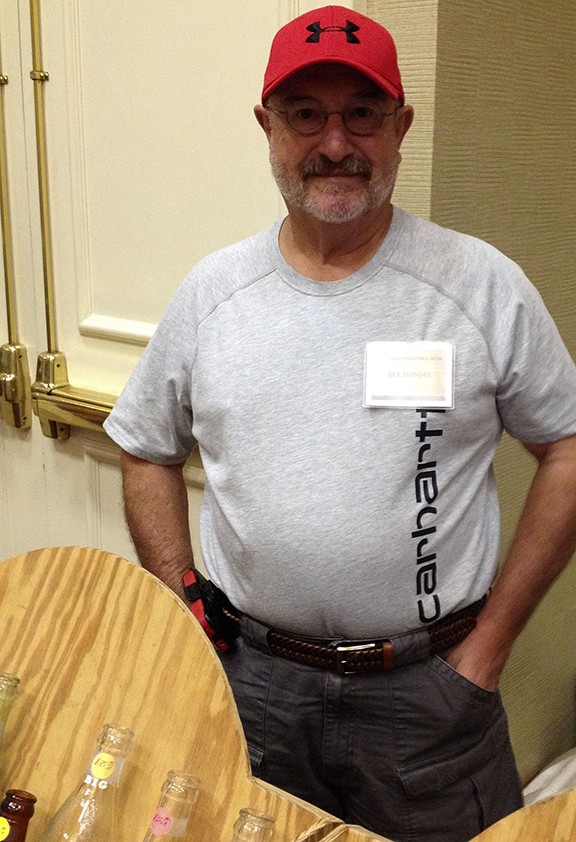