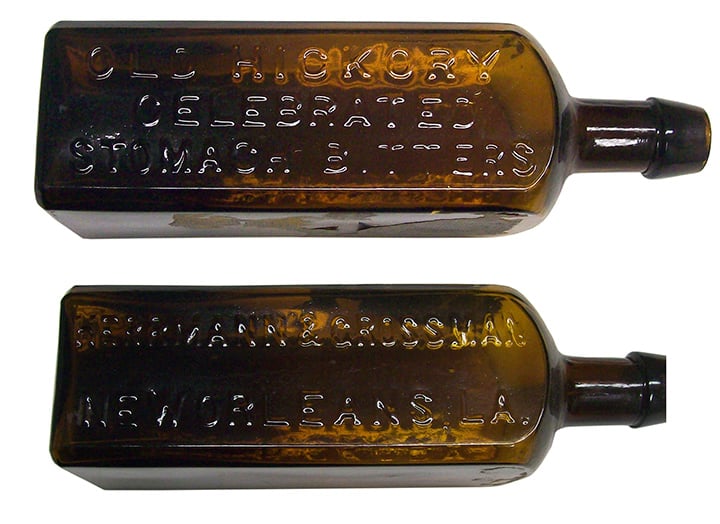 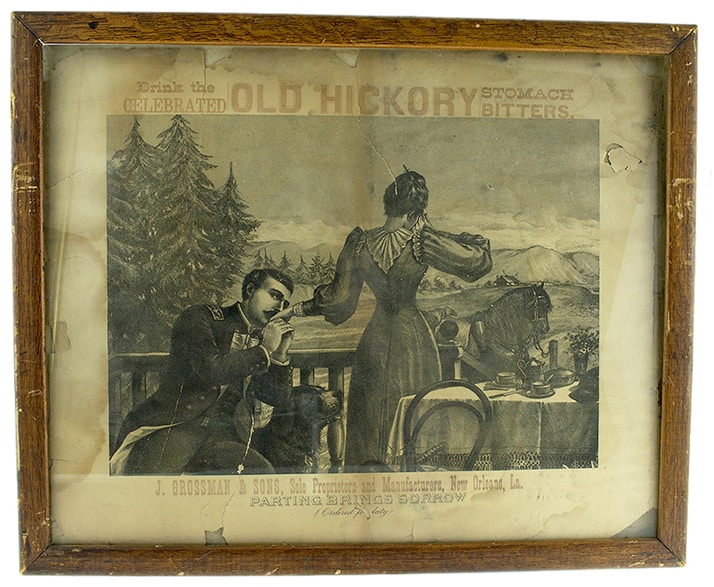 It was real nice running into and jawing with Courtney Frioux from New Orleans this past weekend at the Houston Antique Bottle Show. These days, this is one of the main reasons I like going to shows as I tend to find fewer and fewer new bitters to fit in my collection while wandering the aisles. What I do find is dialog and stories that might lead to pictures of rare birds and who knows what else?

This past Saturday, Courtney and I were talking about his examples of some extremely rare New Orleans bitters such as the Morison’s Invigorating Bitters, Malakoff Bitters, Aya Pana Bitters, Commander’s Aromatic Bitters, Old Hickory Bitters and the only Prices Aromatic Stomach Bitters. He promised to send pictures. One captured my attention immediately as it was an earlier variant and unlisted Old Hickory Celebrated Stomach Bitters (pictured at top of post) with an embossed “Herrmann & Grossman” instead of “J. Grossman“. I possess the later, tooled top example which is pictured below. Various Carlyn Ring and W.C. Ham listings in Bitters Bottles are referenced in this post. 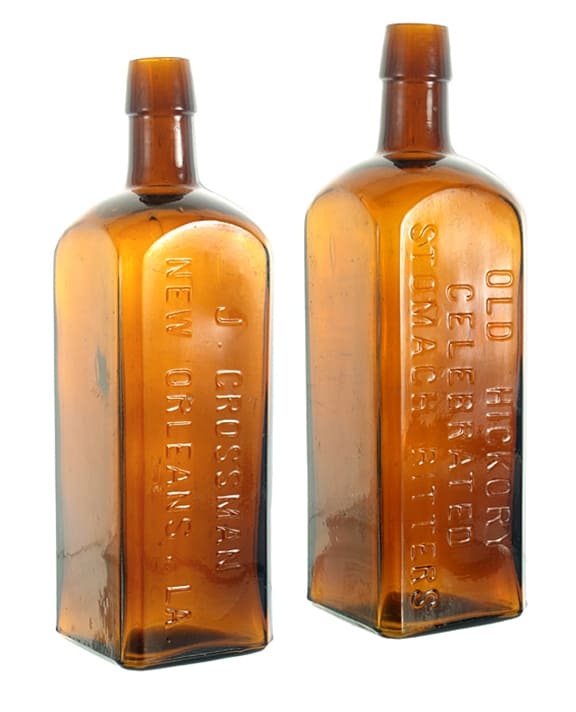 The new listings by Bill Ham for the forthcoming Bitters Bottles Supplement 2:

Note: I need a good picture of the O 33 variant with “J. GROSSMAN’S SONS” listed above to be included in post.

Note: Does anybody have an image of the sign above referenced on page 411 in Bitters Bottles? 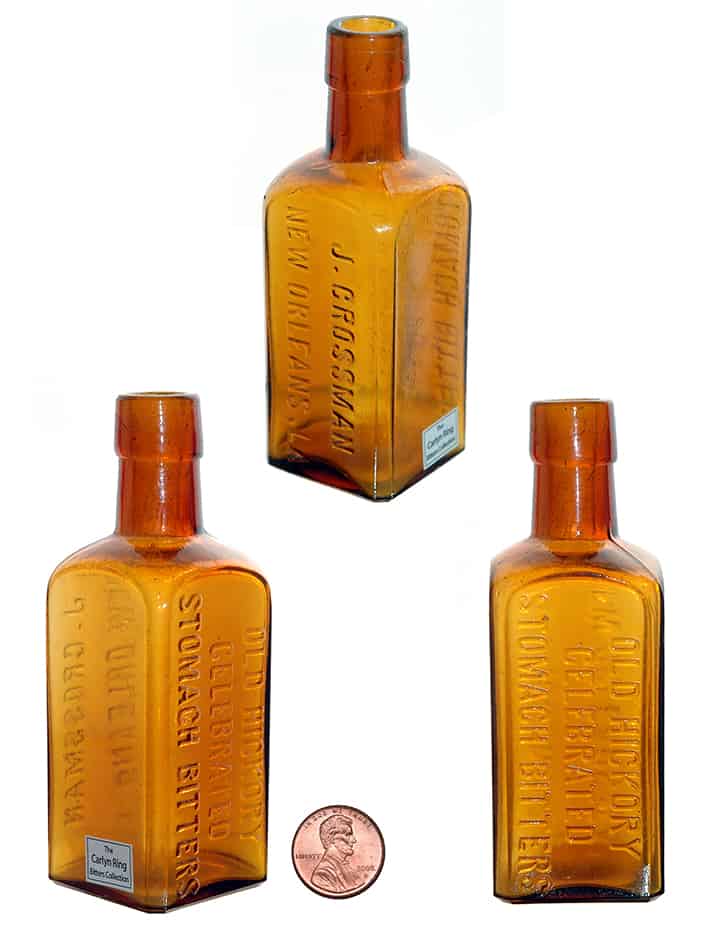 The Old Hickory Bitters is named after President Andrew Jackson. Jackson received his nickname “Old Hickory” at the Battle of New Orleans. He was a strict officer but his men loved him. They said he was as tough as “Old Hickory Wood” on the battle field. He acquired the nickname at the Battle of New Orleans on January 8th, 1815. Jackson and his 5,000 troops defeated British Admiral Alexander Cochrane and General Edward Pohenhain and their 7,500 troops. 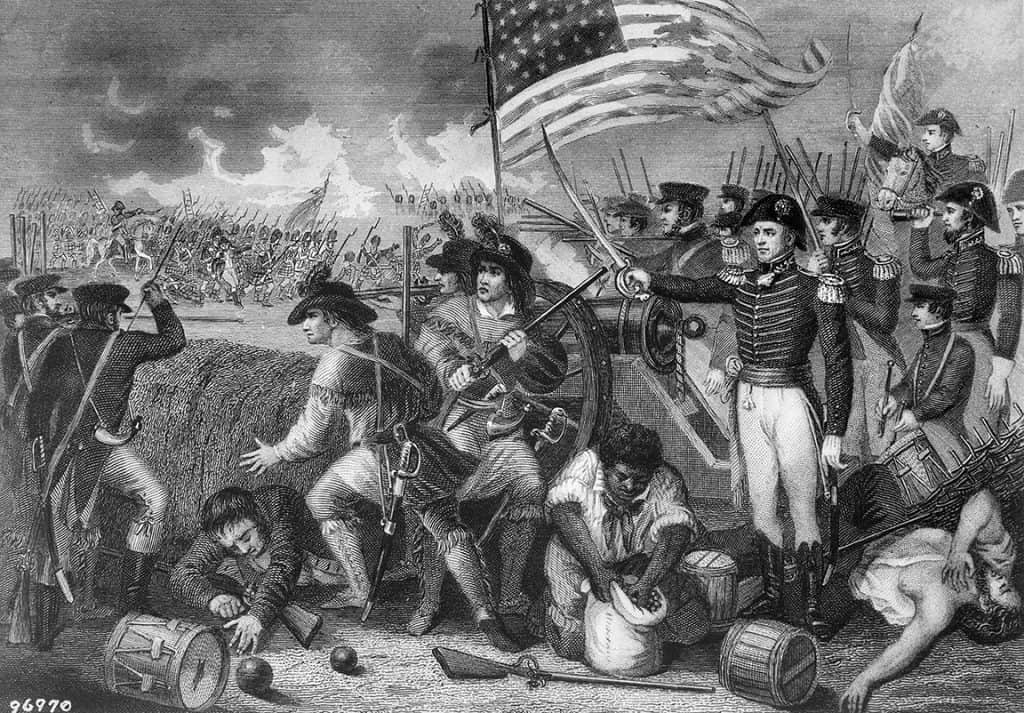 The Battle of New Orleans by Henry Bryan Hall after William Momberger.

In 1959, Country Western singer Johnny Horton recorded his biggest hit song, Battle of New Orleans. For it he received a Gold Record. Song writer Jimmy Driftwood received the Song of the Year award for 1959. A portion of the song … “Old Hickory said we can take em by surprise if we do not fire our muskets till we look em in the eyes; we held our fire till we seen their faces … [Info from Gary Beatty]

Simon Herrmann was born about 1832 in Germany and arrived in Louisiana in 1863 or so and established himself in business at Point Coupee and Waterloo. He next came to New Orleans and entered the staple dry goods, boots and shoe business under the business name Herrmann, Levy & Company (Simon Herrmann, Leopold Levy and Joseph Israel) in 1870. Next he entered the wholesale liquor business with Mr. Joseph Vignes around 1875. The firm dissolved in 1876 or 1877, and Mr. Herrmann worked alone before he established the firm of Herrmann and Grossman in 1883. Around 1884 or 1885, is when the first Old Hickory Celebrated Stomch Bitters was made based on a patent on 12 February 1885. Herrmann and Grossman then dissolved and Mr. Herrmann started business with his son under the title of S. Herrmann, Son & Cassard, liquor dealers and commission merchants at 41 Decatur street. As you can see from the clipping below, he died a tragic death by suicide in 1888.

Jacob Grossman was born on 15 May 1848 in Lautenburg, West Prussia, Poland and originally resided and worked in Baton Rouge, Louisiana as a retail grocer in the 1870s and 1880s according to United States Federal Census records. Grossman relocated to New Orleans where he partnered with Simon Herrmann. His business names were Herrmann and Grossman (1883 – 1888), Jacob Grossman (1888-1892), Jacob Grossman & Sons (1893-1900) and J. Grossman’s Sons (1901-1915). His sones were Louis and Adolph and his daughters were Isadore and Clisia. He was generally listed as a wholesale liquor dealer and commission merchant. He died on 4 November 1899 in New Orleans. 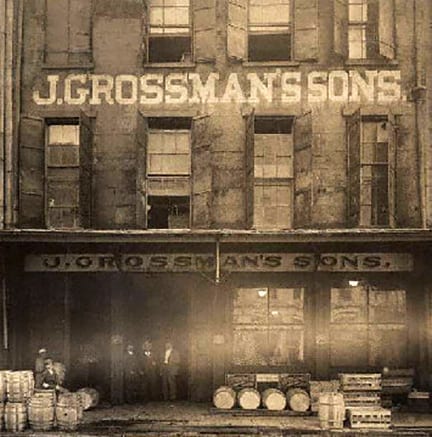 Jacob Grossman reportedly first put out his version of the Old Hickory Celebrated Stomach Bitters product in 1892, and registered the trademark on May 2, 1893 (see below). According to Eric McGuire, the essential feature of the trademark was the words “Old Hickory”, but on one label the words “Old Hickory Celebrated Stomach Bitters” were printed above the famous New Orleans statue of Andrew Jackson on a horse, and below the stature the obverse sides of two metals, and at the bottom, “J. Grossman, Sole Proprietor and Manufacturer, New Orleans, La. Directions on the other side.” On the other label there is a portrait of Grossman with “Celebrated, Old Hickory”above and “Stomach Bitters” below. At the bottom is the signature of J. Grossman. 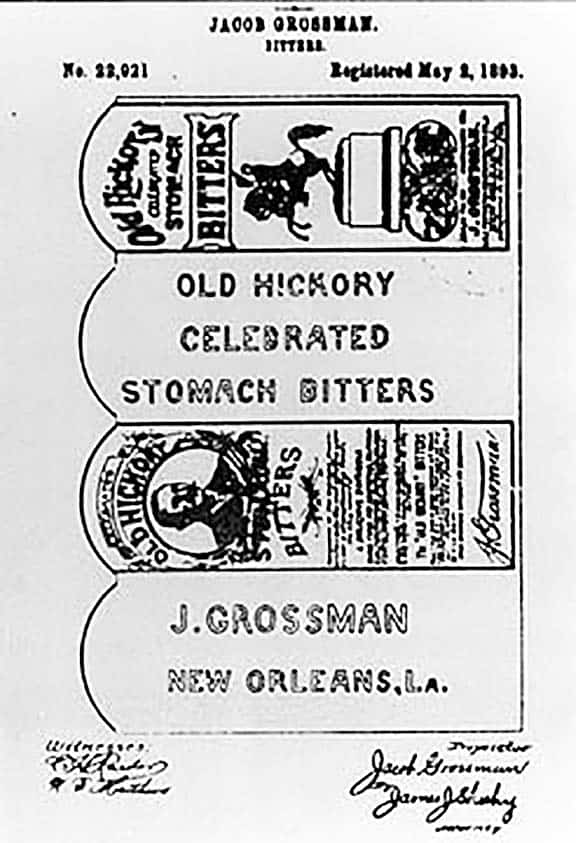 There is reference to another patent image dated September 11, 1891 of a “symbolic representation of a female figure representing Justice and holding a pair of scales above her head and leaning upon a spear held in the other hand.”

As an aside, Dr. Richard Cannon notes an example of the Old Hickory Celebrated Stomach Bitters that was dug on Galveston Island in Texas. 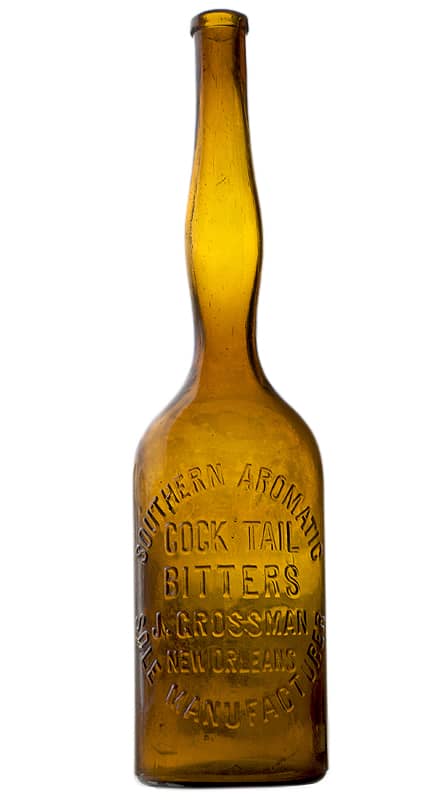 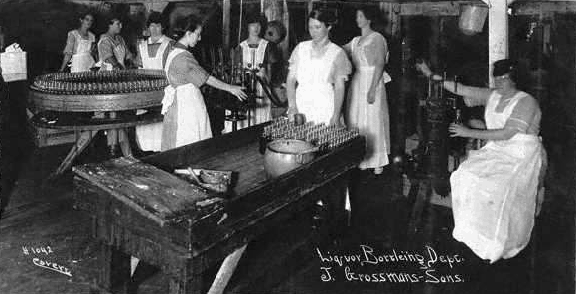 J. Grossman’s Sons would later become famous for a product called Grapico. His son Adolph and daughter Isadore would carry the business forward. 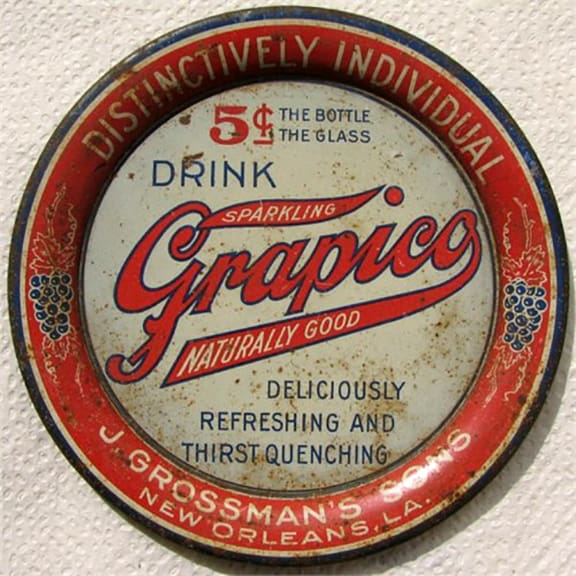 Ferdinand Meyer V is a native of Baltimore, Maryland and has a BFA in Fine Art and Graphic Design from the Kansas City Art Institute and School of Design. Ferdinand is the founding Principal of FMG Design, a nationally recognized design consultation firm. Ferdinand is a passionate collector of American historical glass specializing in bitters bottles, color runs and related classic figural bottles. He is married to Elizabeth Jane Meyer and lives in Houston, Texas with their daughter and three wonderful grandchildren. The Meyers are also very involved in Quarter Horses, antiques and early United States postage stamps. Ferdinand is the past 6-year President of the Federation of Historical Bottle Collectors and is one of the founding members of the FOHBC Virtual Museum.
View all posts by Ferdinand Meyer V →
This entry was posted in Bitters, Bottle Shows, Collectors & Collections, History, Liquor Merchant, Revolutionary War and tagged Andrew Jackson, bitters, Courtney Frioux, Germany, Grapico, Grossman, Herrmann, Hickory, Jacob, lady's, leg, Louisiana, Meyer, New Orleans, Old, Simon, suicide. Bookmark the permalink.