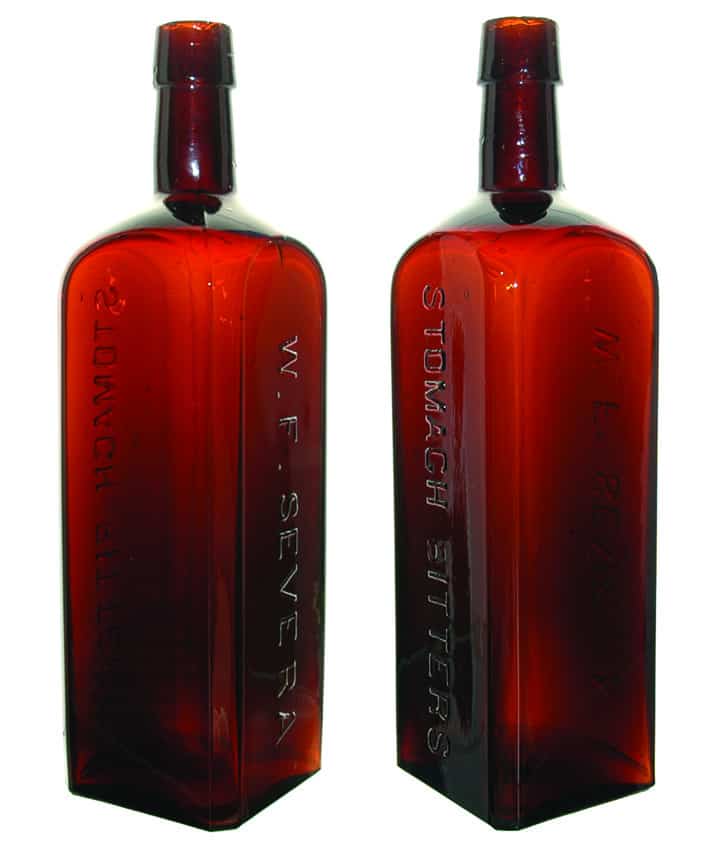 Iowa has been in my bitters news lately with a question from Marlena VanHelsing on a labeled Dr. Von Hopf’s Curacao Tonic Bitters put out by Chamberlain & Company in Des Moines, Iowa. There is also a labeled example on ebay now along with Marlena’s example which I see she has also posted on ebay. The third Iowa straw was coming across a nice article by Michael Burggraaf in a 2003 article in Bottles and Extras called “Collecting Bottles by State, The Ioway – Part 3 – Bitters Bottles“. In the article, Mike discusses the Dr. Von Hopf’s Bitters and he also mentions the Severa’s Stomach Bitters from Cedar Rapids, Iowa.

These products are very similar in that they both came in square and flask forms and they both were put out by men with strong ethnic backgrounds who came to America and settled in Iowa. Only good fortune was ahead.

[Michael Bruggraaf] Similar to the Chamberlain firms, Severa used a flask and a square bottle (Meyer example at top of post) to market his bitters, the flask being the fifty cent size and the square selling for one dollar. The flasks are amber and are not embossed with the word bitters. Labeled examples of the flask exist that confirm that it was used for bitters. The script embossing on the side panels reads: W. F. Severa / Cedar Rapids, Iowa.

There are three distinct versions of the larger square bottle. All known examples are various shades of amber with the most popular variety being embossed on one side W. F. SEVERA and on the other side STOMACH BITTERS. The other version is embossed W. F. SEVERA/ CEDAR RAPIDS in block letters while the newest example is embossed with the same lettering, only in script style. There are machine made examples of the script embossed bottles in both the flask and square. There are no known examples of Severa’s bottles that are embossed with both the town and the word bitters. Also known is a “label only” example on a crude square bottle that leads to speculation that the early 1880s examples of Severa’s bitters were not embossed. 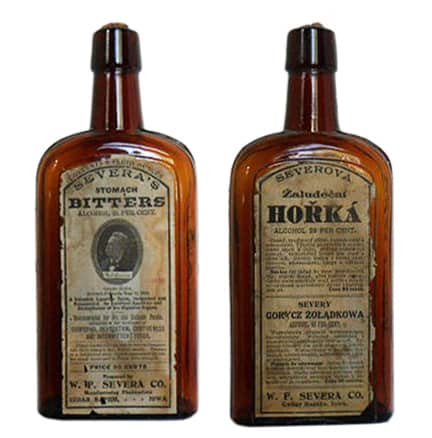 Label: A reliable remedy for dyspepsia, every species of indigestion, intermittent
fever and all kinds of periodical disorders. A mild and safe invigorant for delicate
females, a good tonic for ordinary family purposes. A powerful recuperant after the
frame has been reduced. An excellent appetizer as well as strengthener of the
digestive forces. An agreeable and mild laxative stimulant. Persons in a debilitated
state should commence by taking small doses and increase with their strength.
Severova Saludecni Horke. Text and directions also in Polish. 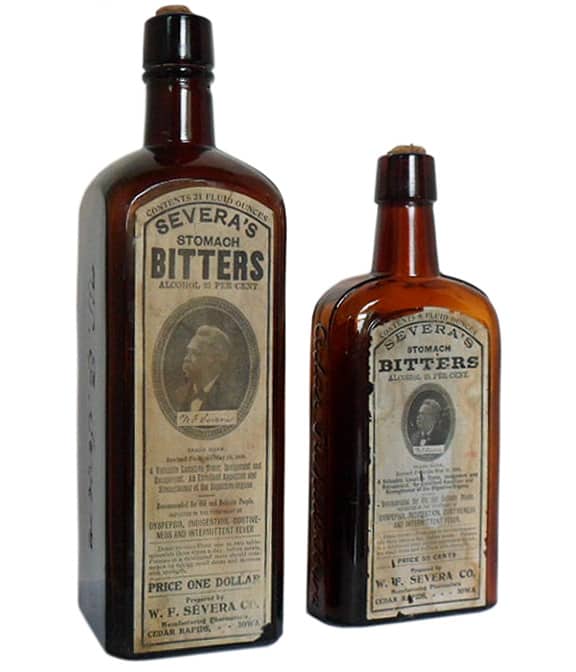 While business plays a most important part in the life of a great majority of men, the broad-minded man is he who recognizes not only the obligation that devolves upon him to provide for his own support and those dependent upon him but also permits his labors to reach out into the wider field wherein he recognizes his obligations to all mankind and strives to discharge every duty and meet every responsibility. While one of the most successful business men of Cedar Rapids, where as a manufacturing pharmacist he is conducting an extensive enterprise, Mr. Severa is also concerned in movements that have for their object the welfare and upbuilding of the entire community and especially the development of the intellectual forces. His wide acquaintance renders his history one of particular interest to a large majority of his fellow townsmen and others in this part of the state.

He was born at Doubravice, near Chrudim, Bohemia, September 3, 1853. He acquired a common-school education in his native village and in 1868, when a youth of fifteen years, came to the United States, making his way to Racine, Wisconsin. He was influenced in his choice of a location by the fact that he had relatives living in that city. During the winter months he attended the public schools, while in the summer season he worked that he might meet his expenses throughout the remainder of the year. In his early youth he yearned to see foreign countries and eagerly grasped the opportunity when his older sister, then living near Racine, invited him to come to America – the land of many advantages. After remaining for some time in Wisconsin he journeyed westward as far as Cedar Rapids, Iowa, and in January, 1877, accepted a position in a drug store at Belle Plaine, Iowa, where he prepared himself practically for the pharmaceutical profession. In 1880 he came to Cedar Rapids as a registered pharmacistand opened a drug store.
The business was a success from the start and in connection with the sale of drugs and druggists’ sundries Mr. Severa engaged in the preparation of certain proprietary remedies based on time tested medical prescriptions and these remedies, being aimed against the more common ills, found a ready market. Owing to the merits of the goods and judicious advertising the business increased from year to year until, in 1901, the retail drug business was sold out and the W. F. Severa Company was organized. The new firm, of which W. F. Severa is president and treasurer, is engaged in the manufacture of proprietary medicines, which are widely known as Severa’s family remedies. The enterprise has grown to large proportions and is now one of the leading productive industries of the city.

Into other fields Mr. Severa has also extended his efforts, for he is a man of resourceful business ability, who recognizes and utilizes the opportunities that are presented. He is the founder of the Bohemia American Savings Bank, which upon consolidation became the American Trust & Savings Bank. For six years he served as president of the latter institution, being the first to occupy the position, and is now its vice president. He also holds an interest in the Security Savings Bank and was the first director thereof. He is interested in the Merchants National Bank of Cedar Rapids; is financially interested in the Cedar Rapids Light & Power Company and the Cedar Rapids & Iowa City Interurban Railway and of the latter is a director. He is likewise connected with the Cedar Rapids Life Insurance Company as a stockholder and director. His cooperation in different connections is eagerly sought, for his judgment is recognized as sound and his sagacity keen.

Considering what Mr. Severa has achieved in the business world one might easily imagine that his entire time and attention were given to commercial and manufacturing interests, yet he finds opportunity to aid in the work of public progress and to advocate and support many measures for the general good. He has been a member of the Cedar Rapids Civic Improvement League since its organization and is an ardent advocate of the movement for beautifying the city. The public service of great importance in which he has been deeply interested is that which is operated under the name of Council of Higher Education. Of this Mr. Severa was the founder and has been the chief donor to the work. The object is to encourage the Bohemian youth to acquire a higher education in American colleges and universities and to aid promising students who lack the material means necessary to procure it. This association has a wide field of usefulness all over the United States. Mr. Severa is a strong believer in a thorough education and largely through his efforts a building, known as Matice Skolska, devoted to educational purposes, has been erected in Cedar Rapids. In this building there are class rooms, an auditorium and a library with over twenty-five hundred volumes, and a children’s library with about four hundred volumes.

In 1881 Mr. Severa was united in marriage to Miss Josephine Dusil, then a teacher in the public schools of Cedar Rapids. They have two children: Lumir Severa, now vice president and superintendent of the laboratory of the W. F. Severa Company; and Zulina (1890-1990), now attending Smith College, at Northampton, Massachusetts. The son obtained his early education in the schools of this city and following his graduation from the high school pursued an academic course in the State University of Iowa, while subsequently he entered the University of Michigan at Ann Arbor, where he completed a classical course and won the Bachelor of Arts degree. Following his graduation he traveled abroad for a time and upon his return from Europe pursued a course in the Philadelphia College of Pharmacy, from which institution he was graduated with the degree of P. C. In addition to his excellent scientific preparation in the field of chemistry and pharmacy Lumir Severa was actively engaged in the laboratory work during his vacation intervals, thus making himself thoroughly acquainted with all details of the manufacturing processes. He assumed his position as head of the manufacturing department eminently qualified and thoroughly prepared, possessing both theoretical and practical knowledge of the work, and has since been called to the position of second executive officer, being now vice president of the company.

W. F. Severa is well known in fraternal circles, being a charter member of Lodge Jan Hus, No. 51, I. O. O. F., of Cedar Rapids, which was organized in March, 1885; Lodge Prokop Velky, C. S. P. S.; and Lodge Prokop Velky, Z. C. B. J. He is also a member of a reading and literary society and is interested in all that tends to promote intellectual progress, whereby man is trained not only to utilize his own powers to better advantage but to come into appreciative contact with the master minds of all ages and thus broaden the world of thought in which each individual dwells no matter how narrow or contracted the sphere. Mr. Severa is himself a broad-minded and highly cultured man, of wide interests, activities and aspirations, and the record of his successful and active life is one of the most creditable to be found on the pages of this volume. 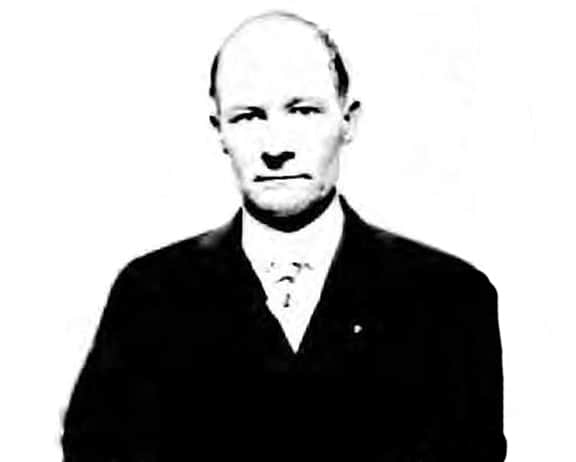 Note #1: I put the above listing to demonstrate how many ways you can find Severa’s name in historical documents. The most common is Waclav but you will also see W.F., Francis, Wesley, Wensel and Wencil.

Note #2: If that is W.F. Severa on the labels, with all that hair, it sure looks like Waclav lost most of it by the time he had his passport shot. 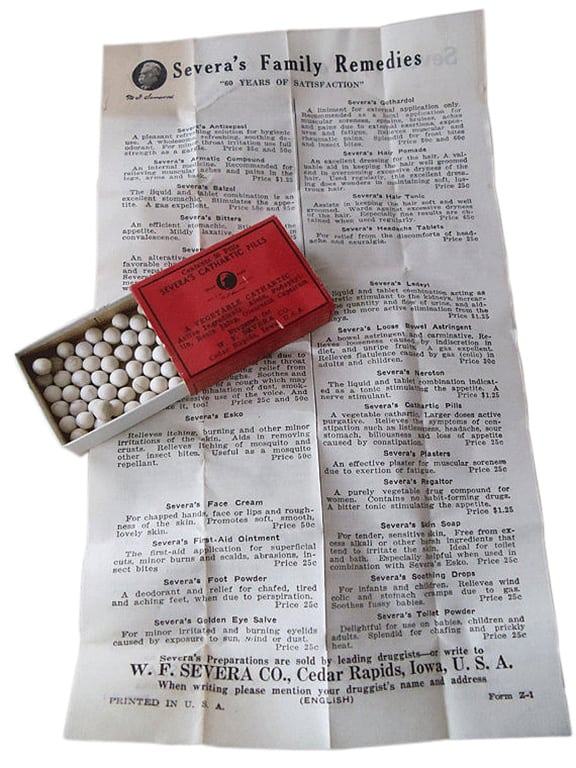 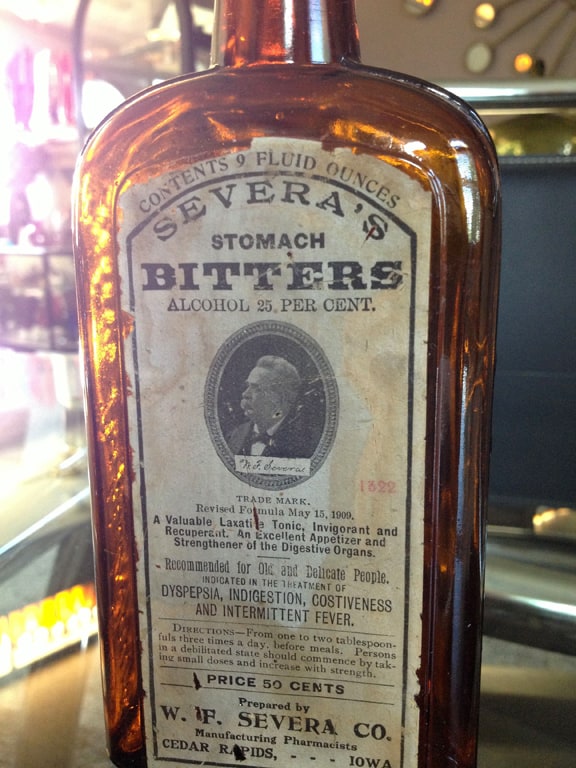 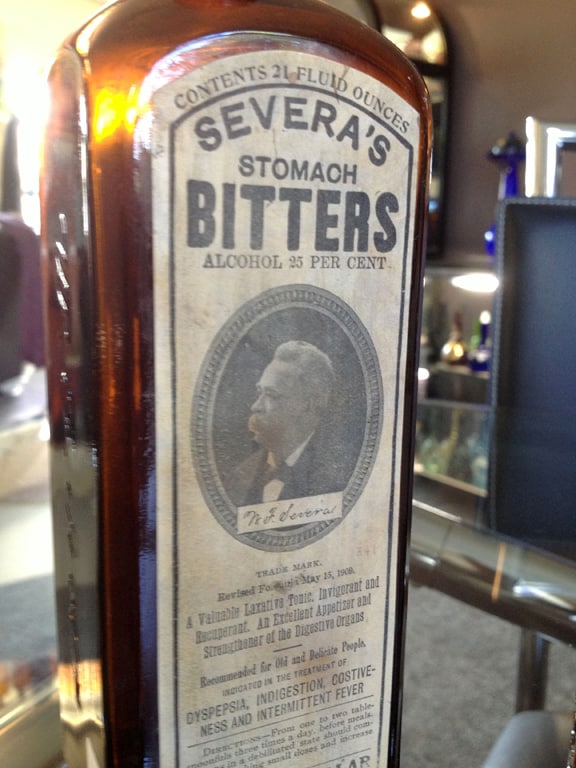 Ferdinand Meyer V is a native of Baltimore, Maryland and has a BFA in Fine Art and Graphic Design from the Kansas City Art Institute and School of Design. Ferdinand is the founding Principal of FMG Design, a nationally recognized design consultation firm. Ferdinand is a passionate collector of American historical glass specializing in bitters bottles, color runs and related classic figural bottles. He is married to Elizabeth Jane Meyer and lives in Houston, Texas with their daughter and three wonderful grandchildren. The Meyers are also very involved in Quarter Horses, antiques and early United States postage stamps. Ferdinand is the past 6-year President of the Federation of Historical Bottle Collectors and is one of the founding members of the FOHBC Virtual Museum.
View all posts by Ferdinand Meyer V →
This entry was posted in Bitters, Collectors & Collections, History, Medicines & Cures and tagged bitters, Bohemia, Cedar Rapids, Francis, Iowa, Meyer, pharmacist, Polish, Severa, Stomach, Waclav, wicker. Bookmark the permalink.