Here are those four Texas Bitters 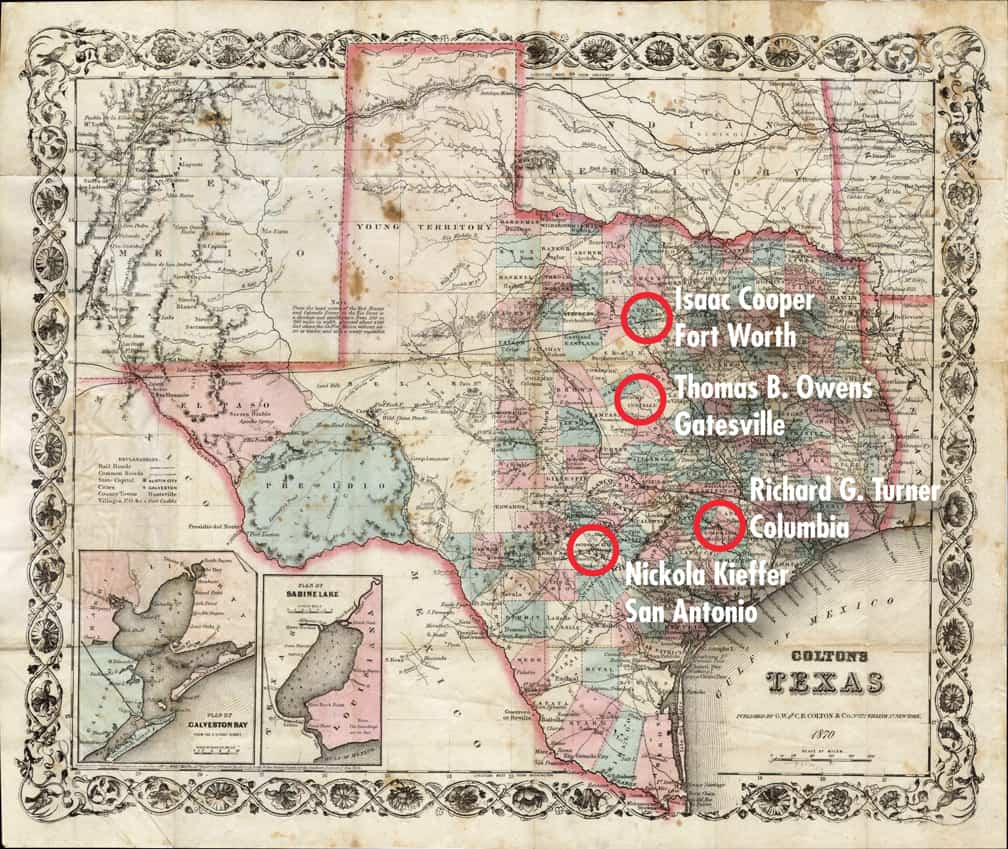 Here are those four Texas Bitters

Reprinted below is an interesting communication from super-sleauth, James Viguerie regarding a few possible leads on unlisted Texas bitters. I spent a few moments trying to find out more information for each possible lead. The map above shows Texas in 1870 and the four people and locations we will be discussing.

Here are those four Texas bitters I found that might be unlisted. They are recipes so it may be they can be matched up to existing Texas bitters. Of course I hope they lead to new unlisted embossed bottles. I did a quick search on each but didn’t see anything. I know I have some more Texas patents of interest and will forward them as well when I come across them. I plan to focus on some Illinois and St. Louis Missouri patents as that is the areas I live in. I am also working on a long list of patents to send to you and Bill Ham. 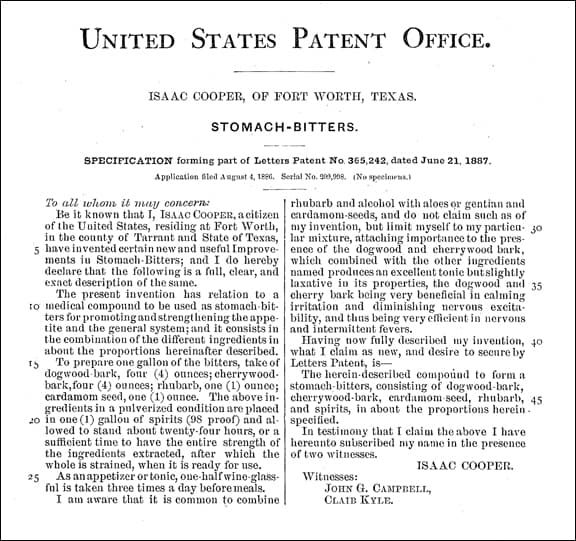 We are most likely talking about Isaac Cooper who, in 1885, was the proprietor of the Cow Boy Saloon at 1215 Main street and the corner 12th in downtown Fort Worth, Texas (see advertisement below). In 1894 he had had two salons, one at 1107 Main and one at 1215 Rusk. James L. Cooper was his father. He was a druggist, physician and surgeon at 1407 Main street. He probably suggested to his son to sell a medicinal concoction from his saloons. In 1892, Isaac Cooper was the proprietor of the Texas Museum and an animal dealer. There are a number of short historical news clips of shootings and murders at the Cow Boy saloon in 1884 and 1885.

Fort Worth Daily Gazette, January 30, 1884 – The friends of Dick Evans, the young mulatto who killed young Cooper in the Cow-Boy Saloon some time ago, are trying to raise by subscription enough funds to employ additional lawyers to defend him when his trial comes off.

Fort Worth Daily Gazette, October 14, 1884 – About 7 oclock yesterday morning, a negro named Jell Daggett and Bill Covington, bartender in the Cow-Boy Saloon had a row over a previous difficulty Covingtons brother had with tho negro. Beth men drew pistols but the negro ran when he saw Covington’s weapon. Covington fired at him as he ran out tho door. Daggett was arrested by Officer Thomason and placed under a $100 bond for carrying a concealed weapon. Covington was also arrested and placed under bond.

Fort Worth Daily Gazette, January 22, 1885 – The case of the state vs. Dick Evans, charged with the murder of George Cooper in the Cow-Boy Saloon is on trial in the district court. 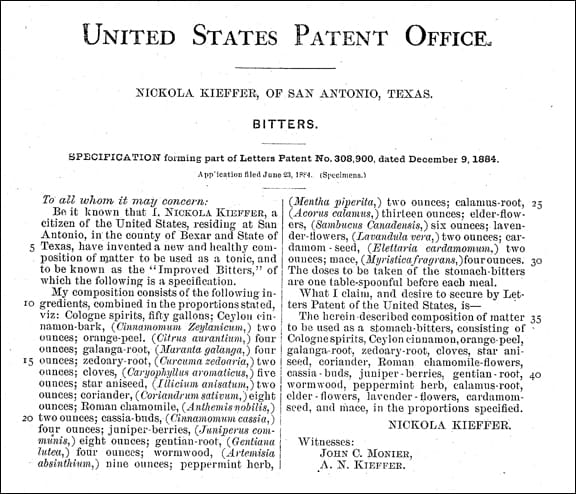 Read: What about this New Orleans Malakoff Bitters?

Thomas B. Owens, Gatesville, Texas. May 20, 1873 Patent 139,185 – Improvement in medical compounds or Bitters for treating chills and fever. 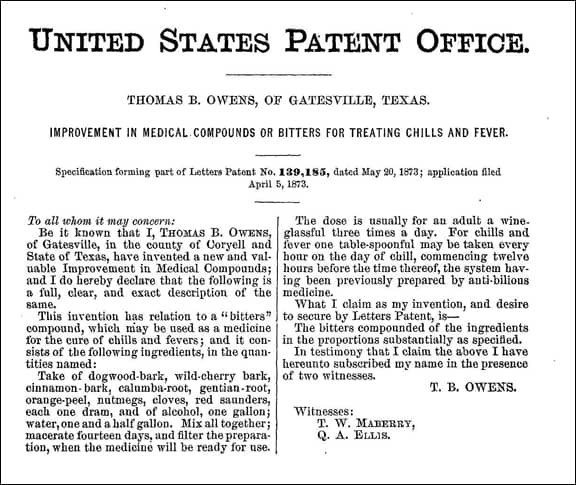 Thomas B. Owens, Gatesville, Texas. May 20, 1873 Patent 139,185 – Improvement in medical compounds or Bitters for treating chills and fever.

Here we might be talking about Thomas B. Owens who was a retail dealer in liquors in 1866. He was married to Hannah Jane Mayberry in 1866 in Coryell, Texas. Their children were Samuel Howard Owens who was born in 1878 in Gatesvile, Texas. Other children were John, William and Jessie. His bitters in 1873 might have been called Owen’s Compound Bitters for Chills and Fever.

Gatesville was a flourishing village on the St. Louis Southwestern Railway, in Coryell county, of which it is the judicial seat, 45 miles south-west of Waco, and 125 north of Austin. It has four churches, a public school, a House of Correction and Reformatory (a State institution), 2 banks, an opera hall, a flour mill, a cotton gin and two weekly newspapers, the GATESVILLE STAR and the POST. Ships cotton, grain and live stock. Population 2,000. Telegraph, W.U. Express, Pacific. Clarence L. Bush, postmaster. – 1892 Gazetteer for Coryell County

THOMAS B. OWENS OF GATESVILLE, TEXAS.

IMPROVEMENT IN MEDICAL COMPOUNDS OR BITTERS FOR TREATING CHILLS AND FEVER.

Be it known that I, THOMAS B. OWENS, of Gatesville, in the county of Coryell and State of Texas, have invented a new and valuable Improvement in Medical Compounds; and I do hereby declare that the following is a full, clear, and exact description of the same.

This invention has relation to a bitters compound, which may be used as a medicine for the cure of chills and fevers; and it consists of the following ingredients, in the quantities named:

Take of dogwood-bark, wild-cherry bark, cinnamon-bark, calumba-root, gentian-root, orange-peel, nutmegs, cloves, red saunders each one dram, and of alcohol, one gallon; water, one and a half gallon. Mix all together; macerate fourteen days, and filter the preparation, when the medicine will be ready for use.

Reference to unlisted Comanche Bitters put out by Thomas B. Owens of Waco, Texas. Advertisements submitted by Corey Stock. 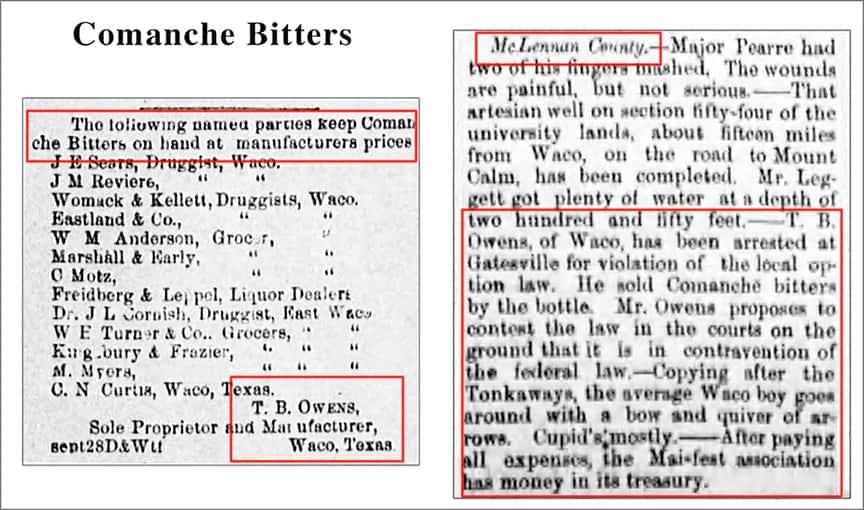 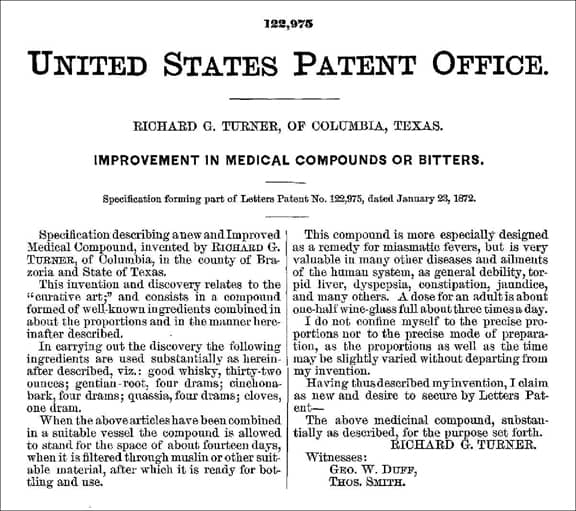 Dr. Richard G. Turner was born in 1839 in Virginia was was the son of Thomas Barnes Turner and Louisa Jane Thorp who were married on November 17, 1829 in Greensville County, Virginia. From there, records show him in Alabama and then off to medical school at Tulane University School of Medicine, New Orleans, University of Louisiana Medical Department in 1860. During the Civil War, Dr. Turner was in the Confederate Matagorda County Caney Mounted Rifles under Capt. Edward S. Rugeley. The muster roll was dated 13 June 1861. He was also a Surgeon in the 35th Texas Cavalry (Brown’s Regiment).

After the war, Turner first located in Matagorda County, but remained there only a short time. Next he moved to Columbia, Brazoria County, where he remained several years. Next he moved to Fort Bend County and was a citizen of Richmond at the time of the troubles between the political factions known as the Jaybirds and Woodpeckers. After that he came to Galveston.

Turner had extensive experience in the treatment of yellow fever and was recognized as an authority. The Mayor of Galveston, in an official report thanked him for the wise handling of a case of yellow fever in a manner that prevented its spread. Turner died on 8 June 1905, in Harris County, Texas and is buried at Columbia Cemetery, in Brazoria County, Texas.

His bitters, according to his patent formula in making a batch, would have used 32-ounces of good whiskey, gentian root, cinchona bark, quassa and cloves. After 14 days of sitting, this concoction was ready for bottling. His bitters in 1872 might have been called Dr. Turners Yellow Fever Bitters.

Came Here After the War

Was a Resident of Fort Bend County During the Jaybird-Woodpecker Political Troubles.

Special to the News.

Houston, Tex., June 8–This afternoon at 3 o’clock occurred the death of Dr. R. G. Turner, one of the prominent physicians of this city, at the home, No. 7?6 St. Charles street, of his son, V. B. Turner. He had been ill for some time and recently returned from Mineral Wells, whither he went for the curative properties of the water. His daughter, Mrs. Kitchen of Kentucky, his son, V. B., and several friends were at the bedside when he died. Dr. Turner was a native of Alabama, but came here soon after the Civil War. He was then a young man. He first located in Matagorda County, but remained there only a short time. Thence he moved to Columbia, Brazoria County, where he remained several years. Thence he went to Fort Bend County and was a citizen of Richmond at the time of the troubles between the political factions known as the Jaybirds and Woodpeckers. After that he came to this city, which has since been his home.

He has ever commanded the highest respect of all with whom he came in contact. His friends possessed for him the warmest affection. He had extensive experience in the treatment of yellow fever and was recognized as an authority on that malady. The Mayor of this city in an official report thanked him for the wise handling of a case of yellow fever in a manner that prevented its spread. He was for several years surgeon of Dick Dowling Camp, U. C. V., and a detachment of the camp will turn out in the morning to escort the remains to the Columbia train, on which they will be taken to Columbia for burial. He was 66 years old at the time of his death.

When the above articles have been combined in a suitable vessel the compound is allowed to stand for the space of about fourteen days, when it is filtered through muslin or other suitable material, after which it is ready for hottling and use.

This compound is more especially designed as a remedy for miasmatic fevers, but is very valuable in many other diseases and ailments of the human system, as general debility, torpid liver, dyspepsia, constipation, jaundice, and many others. A dose for an adult is about one-half wineglass full about three times a day.

Having thus described my invention, I claim as new and desire to secure by Letters Patent-The above medicinal compound, substantially as described, for the purpose set forth.

Ferdinand Meyer V is a native of Baltimore, Maryland and has a BFA in Fine Art and Graphic Design from the Kansas City Art Institute and School of Design. Ferdinand is the founding Principal of FMG Design, a nationally recognized design consultation firm. Ferdinand is a passionate collector of American historical glass specializing in bitters bottles, color runs and related classic figural bottles. He is married to Elizabeth Jane Meyer and lives in Houston, Texas with their daughter and three wonderful grandchildren. The Meyers are also very involved in Quarter Horses, antiques and early United States postage stamps. Ferdinand is the past 6-year President of the Federation of Historical Bottle Collectors and is one of the founding members of the FOHBC Virtual Museum.
View all posts by Ferdinand Meyer V →
This entry was posted in Bitters, History, Medicines & Cures, Questions and tagged bitters, Columbia, Corey, Cowboy, Doctor, formula, Fort Worth, Gatesville, Houston, Isaac Cooper, James Viguerie, Nicholas, Nickole Kieffer, Patent, Recipe, Richard G. Turner, Saloon, San Antonio, Stock, texas, Thomas B. Owens, Waco. Bookmark the permalink.