Is the Magic Bitters related to the Penn’s Pony Bitters? 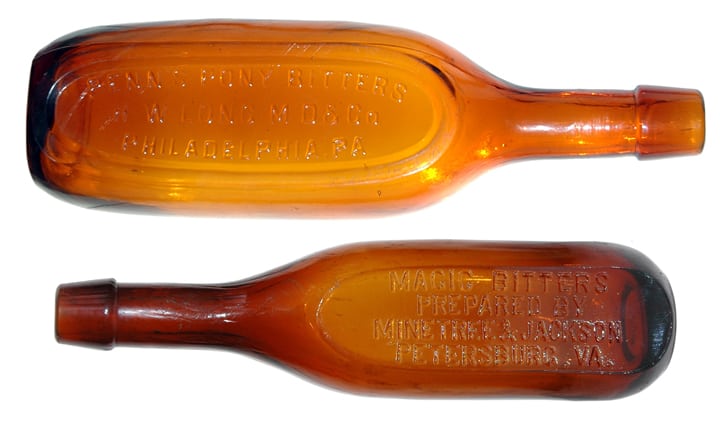 Is the Magic Bitters related to the Penn’s Pony Bitters?

At the Baltimore Antique Bottle Show the weekend before last, I was able to add a Magic Bitters, put out by Minetree & Jackson, Petersburg, Virginia, to my collection. This bottle has a very unusual shape and is similar to the larger, Penn’s Pony Bitters put out by H. W. Long, M.D. in Philadelphia, Pennsylvania. I thought I would take a moment and compare the bottles and see if they are related.

First, let’s look at some information, pictures and listings in Bitters Bottles. 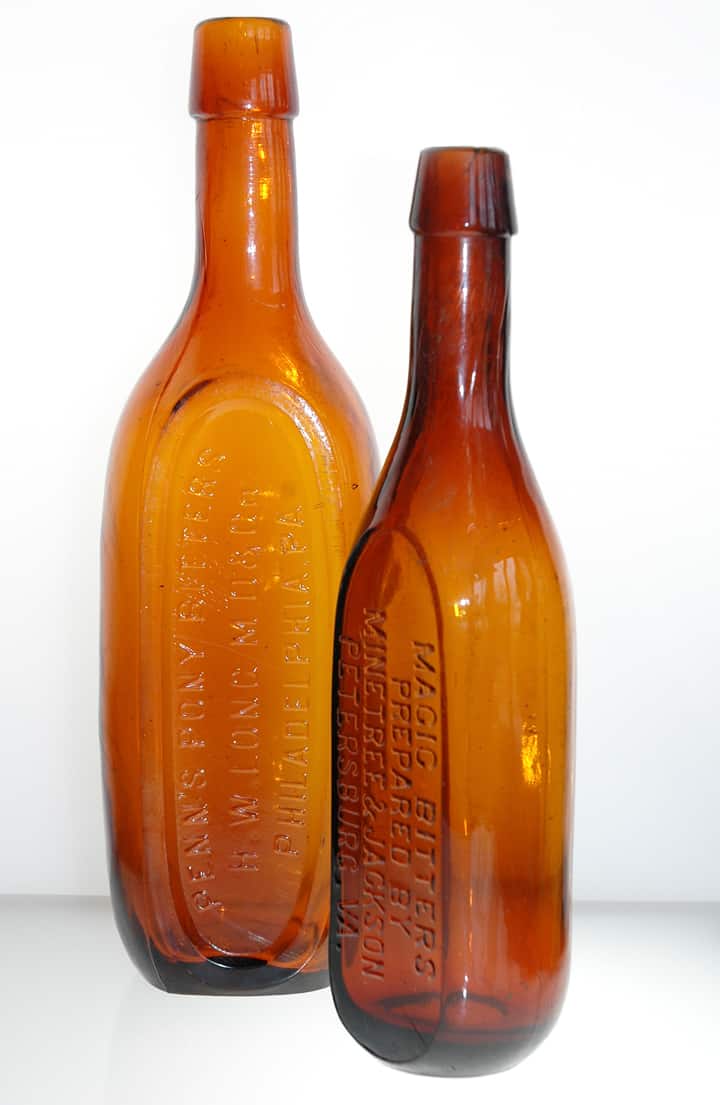 Penn’s Pony Bitters is embossed “H. W. Long M. D. & Co., Philadelphia. “The lettering runs from base to shoulder which is opposed to the Magic Bitters lettering which runs from shoulder to base. Searching online in Philadelphia, reveals two H. W. Longs in the later part of the 19th century. The first is a clerk and the second is a physician. Trailing the physician listing reveals Howard W. Long who was born in Pennsylvania around 1856. His father was George W. Long and his mother was Sarah A. His father ran a tobacco store according to United Stated Federal Census records.

In 1874, Howard was 18 years old and was listed as a salesman, probably hawking medicines. In 1877, he was  a student presumably getting his medical degree. From 1878 to 1921, Dr. Howard W. Long is listed as a physician at various addresses in Philadelphia. The fact that there are few examples of the Penn’s Pony Bitters bottles suggest that Dr. Long had a short relationship with making and selling his bitters. 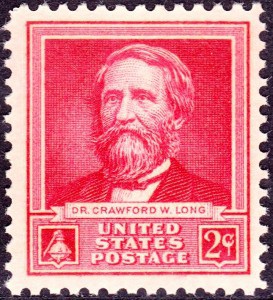 Crawford Long was honored in the “Famous American Series” of postage stamps in 1940.

It is interesting to note that Crawford Williamson Long (November 1, 1815  – June 16, 1878) was an American surgeon and pharmacist best known for his first use of inhaled diethyl ether as an anesthetic. He received his M.D. degree at the University of Pennsylvania in 1839. Although his work was unknown outside a small circle of colleagues for several years, he is now recognized as the first physician to have administered ether anesthesia for surgery. One of the large Emory Hospitals in downtown Atlanta is named after Crawford Long. I can find no family genetic relationship but I have a hunch there is one.

The listing for the bottle in the Carlyn Ring and W. C. Ham Bitters Bottles book is as follows: 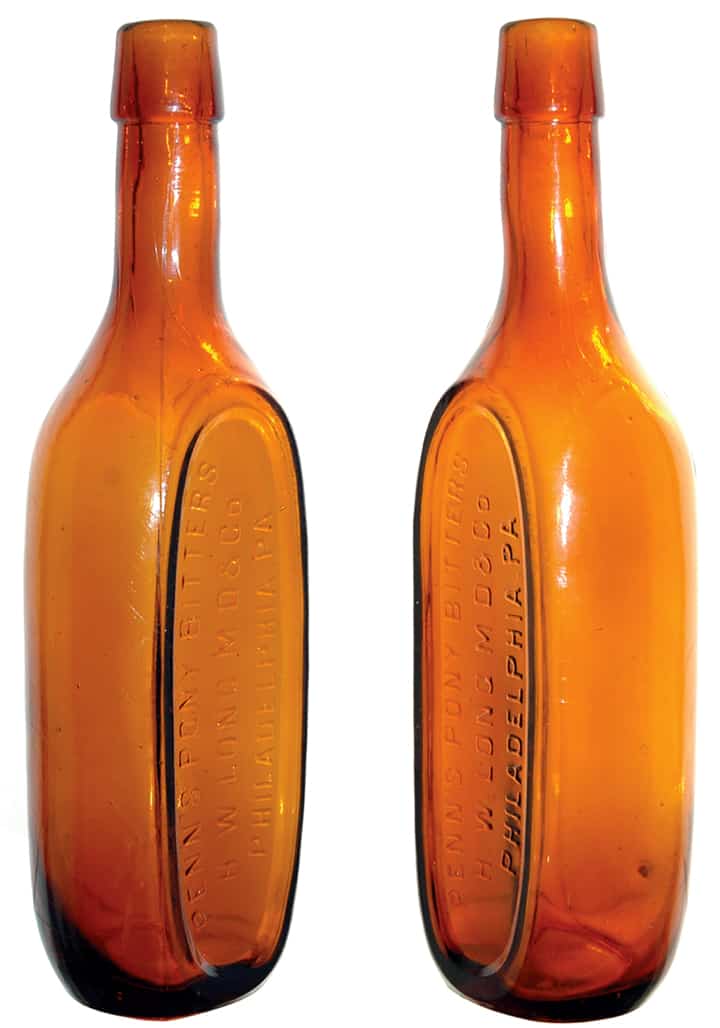 The listing for the bottle in the Carlyn Ring and W. C. Ham Bitters Bottles book is as follows: 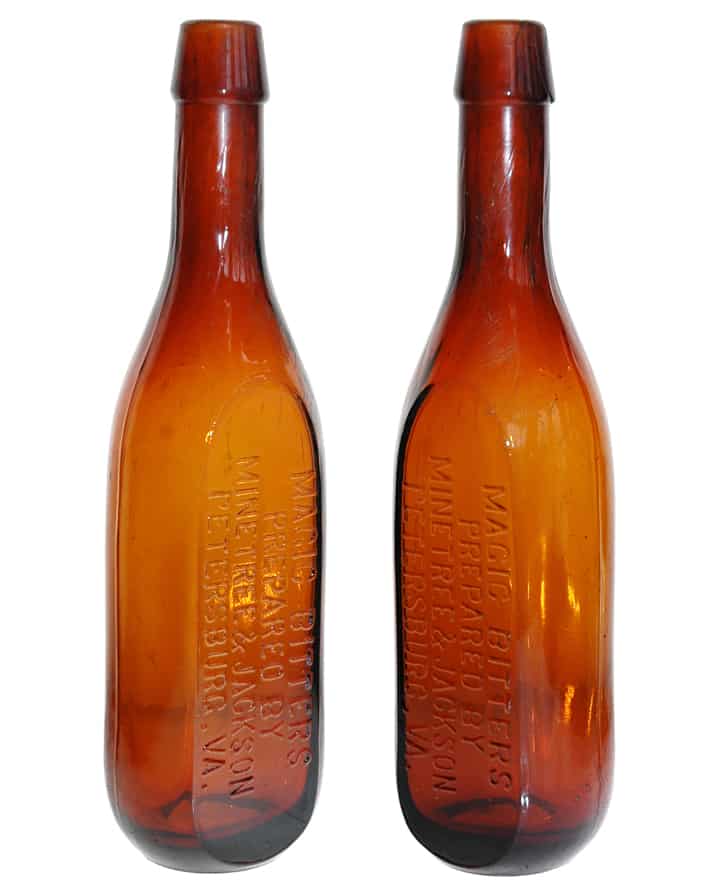 These bottles were made during the same time period. Petersburg, Virginia is 470 miles from Philadelphia which is quite a distance but in other respects, not so far. The bottles are different sizes but so unusual that one must have been copied from the other. Note the coloration which is very similar. As noted before, the Penn’s Pony Bitters lettering runs from base to shoulder which is opposed to the Magic Bitters lettering which runs from shoulder to base. The typography is basically the same though there are slight differences with the characters. The letterspacing is more open on the Penn’s Pony Bitters.

I must say that I was never very enamored with the Penn’s Pony Bitters shape until I paired it with the Magic Bitters. They now sit proudly together begging for someone to complete the story.

Perhaps the Jackson-Long-Minetree connection was that they, or family members met in the military, exchanged ideas, and thus used the same bottle maker. 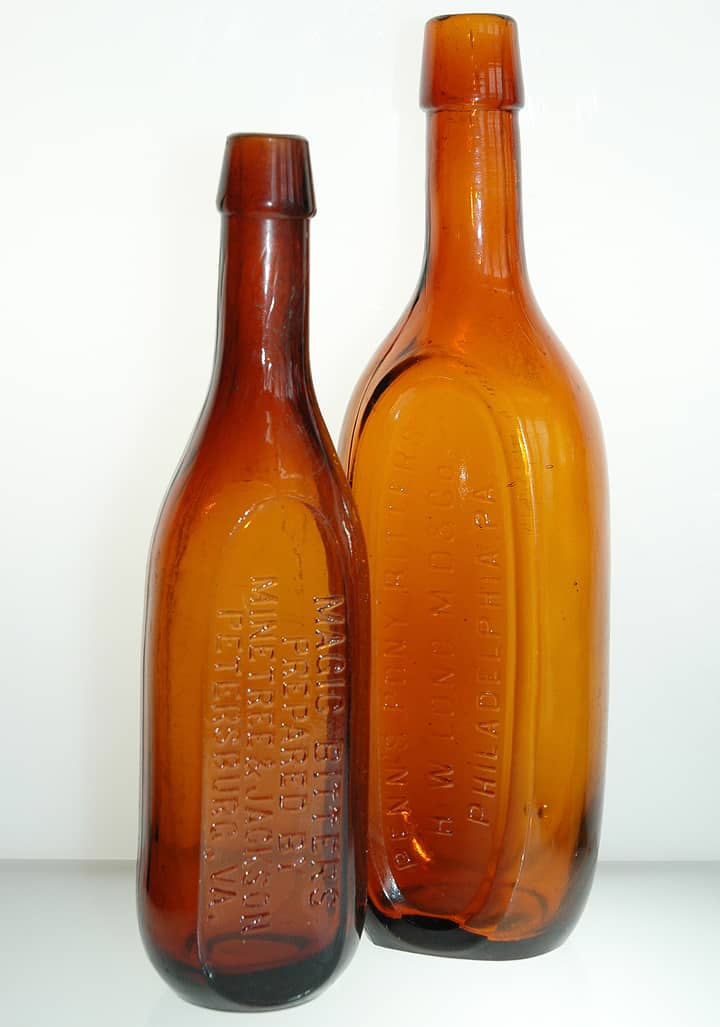 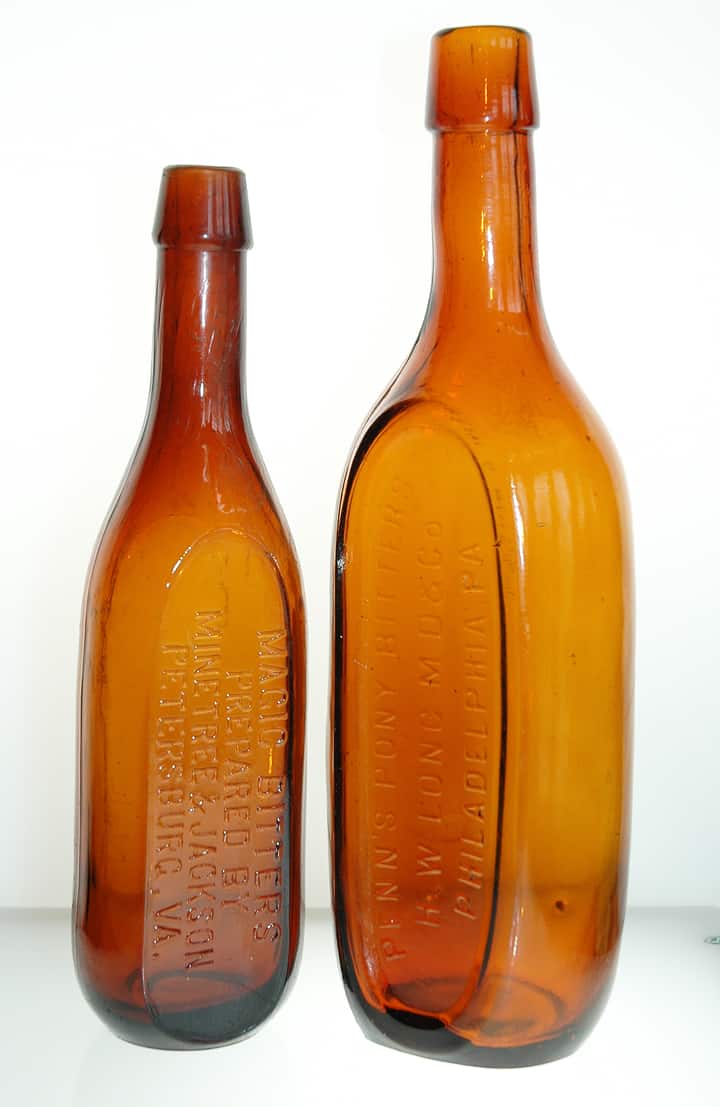 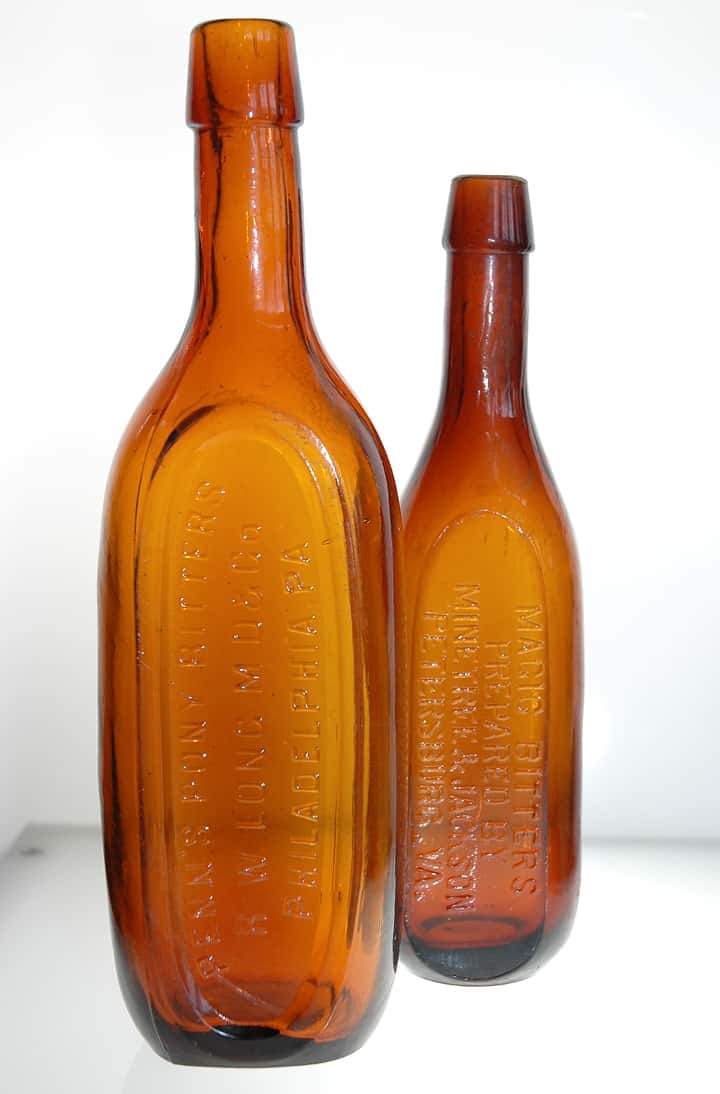 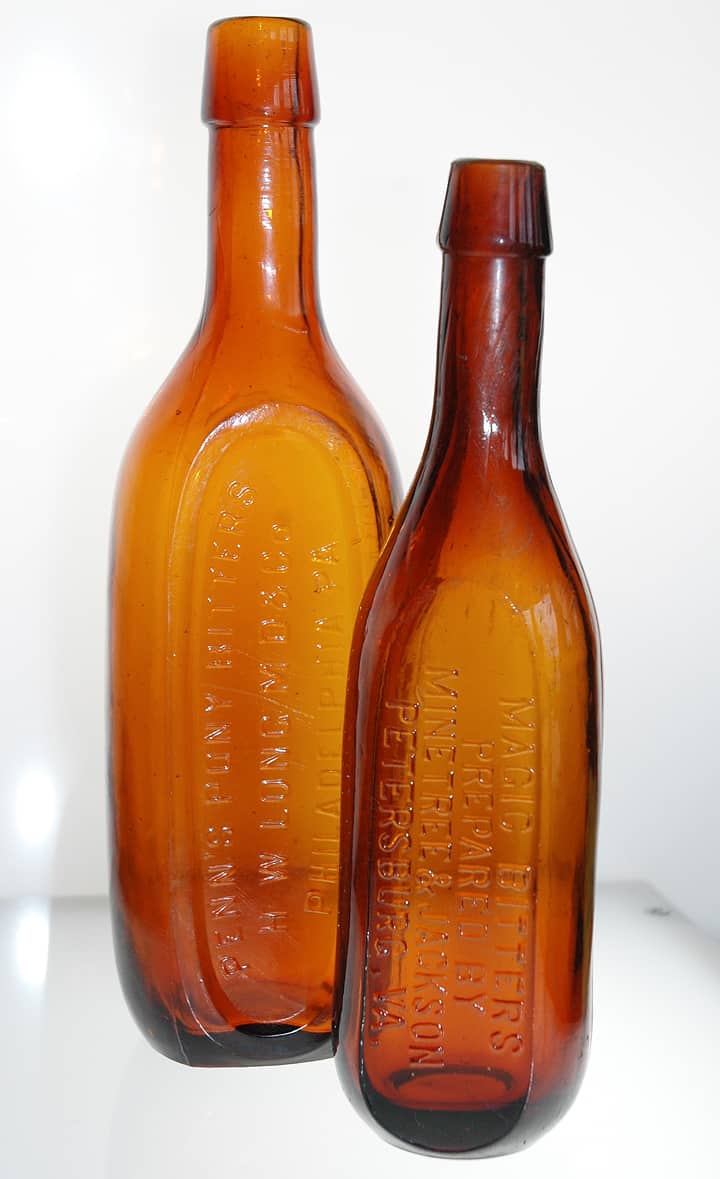 Ferdinand Meyer V is a native of Baltimore, Maryland and has a BFA in Fine Art and Graphic Design from the Kansas City Art Institute and School of Design. Ferdinand is the founding Principal of FMG Design, a nationally recognized design consultation firm. Ferdinand is a passionate collector of American historical glass specializing in bitters bottles, color runs and related classic figural bottles. He is married to Elizabeth Jane Meyer and lives in Houston, Texas with their daughter and three wonderful grandchildren. The Meyers are also very involved in Quarter Horses, antiques and early United States postage stamps. Ferdinand is the past 6-year President of the Federation of Historical Bottle Collectors and is one of the founding members of the FOHBC Virtual Museum.
View all posts by Ferdinand Meyer V →
This entry was posted in Bitters, Collectors & Collections, Druggist & Drugstore, History, Medicines & Cures and tagged bitters, Dow, Druggist & Drugstore, H. W. Long, Jackson, Magic, Marianne, Minetree, Penn's, Pennsylvania, Petersburg, Philadelphia, physician, pony, Virginia. Bookmark the permalink.