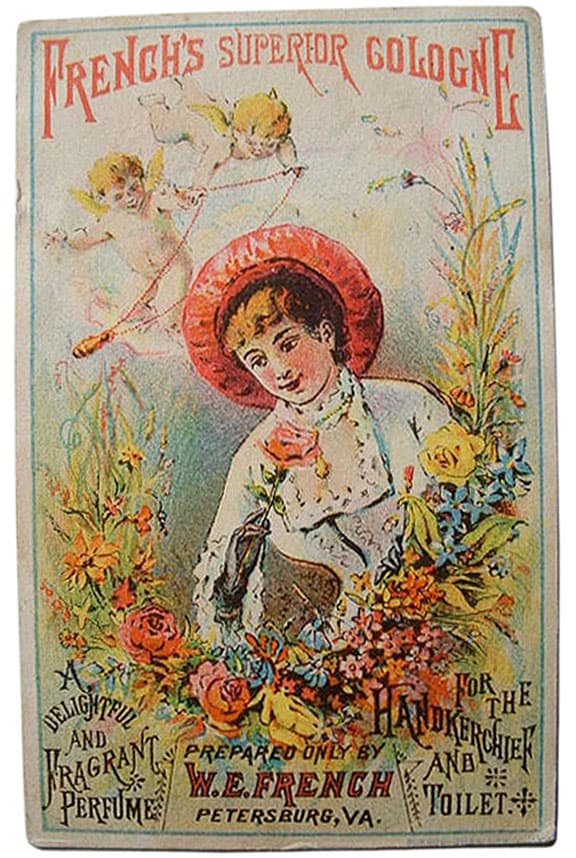 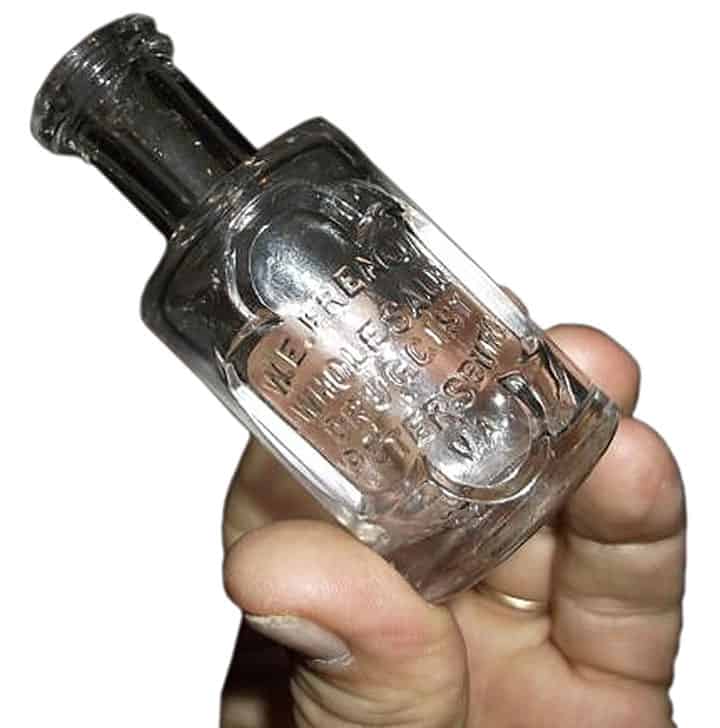 Before I do this, I wanted to revisit ‘Petersburg’ and look at a trade card image I have been carrying around for Cockade Bitters put out by Wm. E. French in Petersburg, Virginia. What reminded me of William French was a card image sent to me the other day by trade card authority Joe Gourd (see yawning child card) that mentions a French’s Virginia Tonic Bitters on the back of the card, along with other French products, such as French’s Superior Cologne, French’s Cholera and Diarrhea Mixture and French’s Arnica Liniment. I was able to find one of his bottles on ebay which is pictured above. 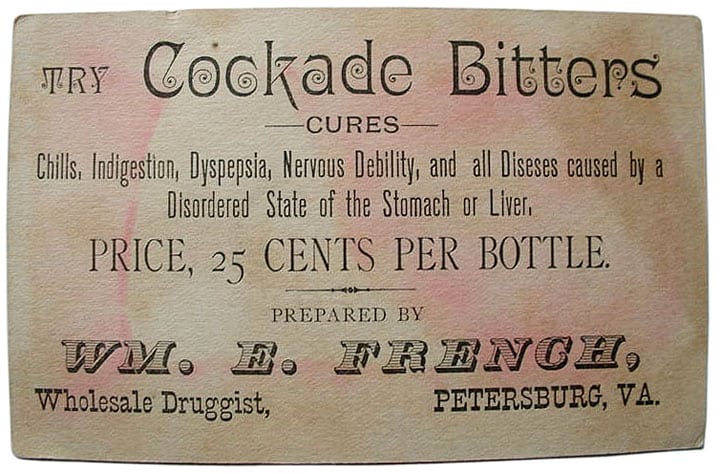 I see that Carlyn Ring and W.C. Ham have a listing for a labeled, F 88, French Virginia Tonic Bitters from Petersburg listed in Bitters Bottles. That listing may want to be updated to read, “French’s” instead of French as we are talking about a name rather than the country.

French’s Virginia Tonic Bitters – Cures Dyspepsia, Chills and Fever and all Disorders of the Liver and Stomach. Price, 50 Cents per Bottle

French’s Cockade Bitters – Cures Chills, Indigestion, Dyspepsia, Nervous Debility, and all Diseases caused by a Disordered State of the Stomach or Liver, Price, 25 Cents per Bottle

I do not see a listing for French’s Cockade Bitters as noted on the back of the trade card above. This will need to be listed in the next Bitters Bottles Supplement. 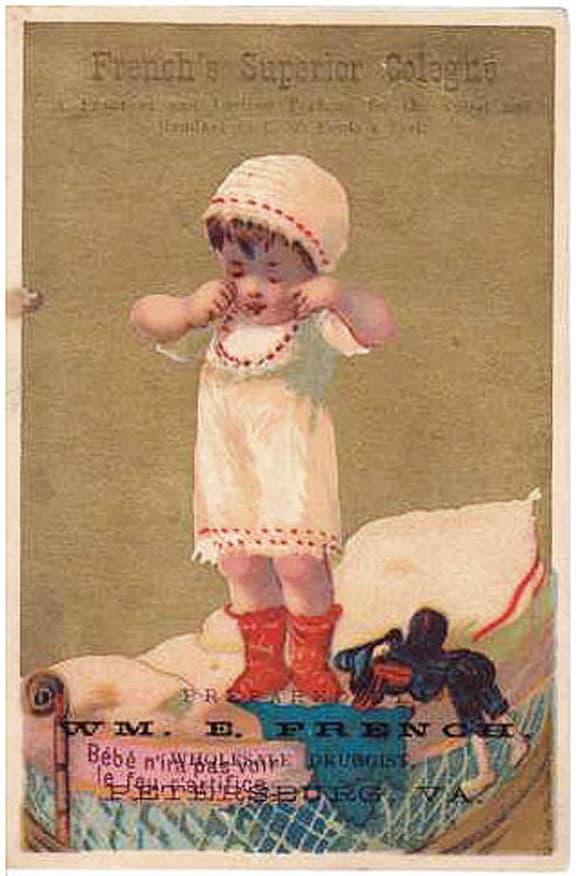 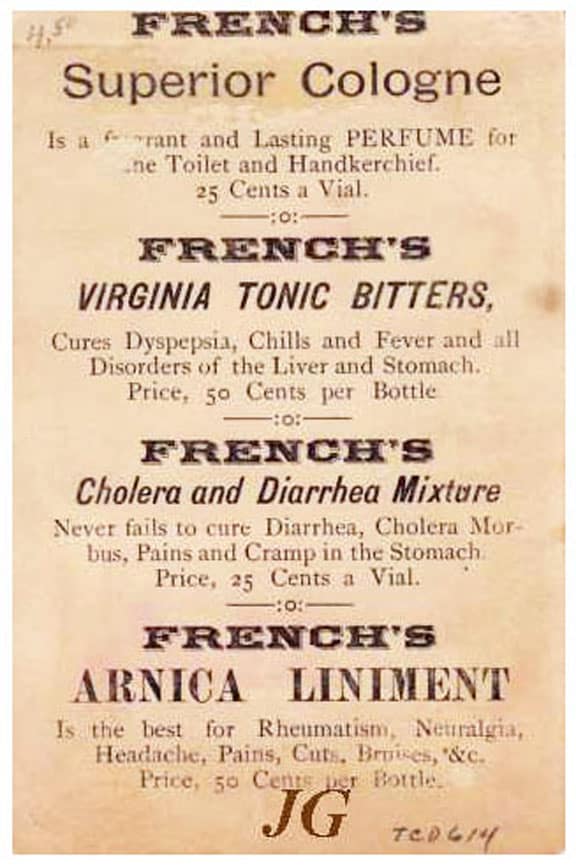 William E. French was a druggist and manufacturer of bitters, medicines and perfumes in Petersburg, Virginia. He was born in December 1845 in Virginia and was the son-in-law of Erasmus Orlando Hinton, (1830 – 1908) another well known, Petersburg druggist. French’s wife was Marian Hinton, and they were married in 1878. They had a daughter named Josephine. 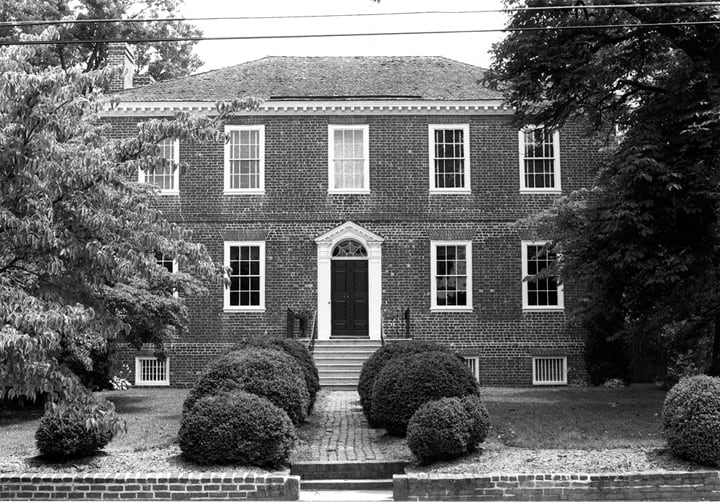 What is interesting is that the French’s and the Hintons lived together as one big happy family with a whole gaggle of children. Lucky they were both druggists! Captain Erasmus Orlando Hinton purchased 416 High Street in Petersburg, pictured above, in 1857. He was the grandson of Sarah Newsum, the niece and heiress of Peter Jones of Folly Castle who laid out High Street on a portion of his lands in Petersburg.

It looks like William French was also a Special Agent for The Fidelity Mutual Life Insurance Association of Philadelphia and a Manager of the Academy of Music in Petersburg. I am unsure why he is listed in Petersburg as a druggist, and as a druggist in Richmond and the manager of Peoples Pharmacy in Norfolk from 1906 to 1910 unless he had a child. 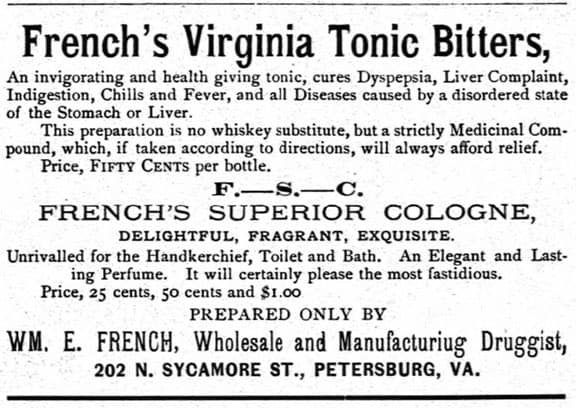 Ferdinand Meyer V is a native of Baltimore, Maryland and has a BFA in Fine Art and Graphic Design from the Kansas City Art Institute and School of Design. Ferdinand is the founding Principal of FMG Design, a nationally recognized design consultation firm. Ferdinand is a passionate collector of American historical glass specializing in bitters bottles, color runs and related classic figural bottles. He is married to Elizabeth Jane Meyer and lives in Houston, Texas with their daughter and three wonderful grandchildren. The Meyers are also very involved in Quarter Horses, antiques and early United States postage stamps. Ferdinand is the past 6-year President of the Federation of Historical Bottle Collectors and is one of the founding members of the FOHBC Virtual Museum.
View all posts by Ferdinand Meyer V →
This entry was posted in Advertising, Cologne, Druggist & Drugstore, Ephemera, History, Medicines & Cures, Tonics, Trade Cards and tagged Arnica, bitters, Cholera, Cockade, cologne, Diarrhea, Druggist & Drugstore, Erasmus, French, French's, Gourd, high, Hinton, Marian, Orlando, Petersburg, Tonic, Virginia, William. Bookmark the permalink.