I have had some conversations and correspondence with Frank Bishop (South Carolina) the past year or so and was intrigued when he sent me this picture of a pontiled, Fisher & Winston medicine (top of post) from Richmond, Virginia. Fisher & Winston were listed in 1860 as Wholesale Druggists at 125 Main Street in Richmond.

James R. Fisher and Edmund T. Winston partnered together in Richmond, Virginia in October 1857 and advertised heavily in Virginia and North Carolina within the Richmond Dispatch and other Virginia newspapers of the period. They were Druggists, sole agents and sold many products such as Tyler’s Compound Syrup of Gum from Baltimore, Planett’s Bitters from New York, Baker’s Premium Bitters from Richmond, Spalding’s Rosemary and Castor Oil from Boston, Burnett’s Superior Extracts, Hartshorn’s Buchu Compound, Rockbridge Aluminum Water, Mrs. Daw’s Cough Elixir and London Club Sauce, among many others.

Fisher & Winston advertisements stopped in late 1860. James Fisher was listed as a druggist in the 1870s and later shows up as Fisher & Conrad in 1874 in Richmond.

A few advertisements and pictures of interest have been culled to support the post. 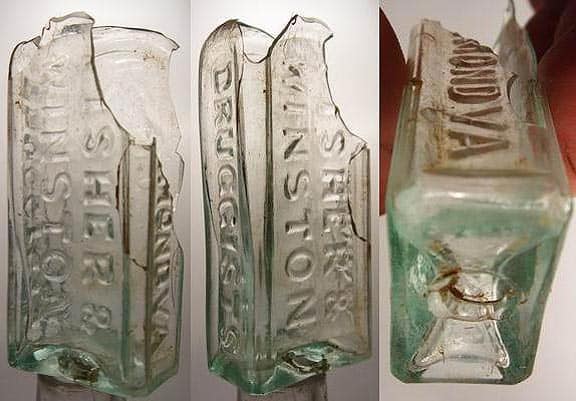 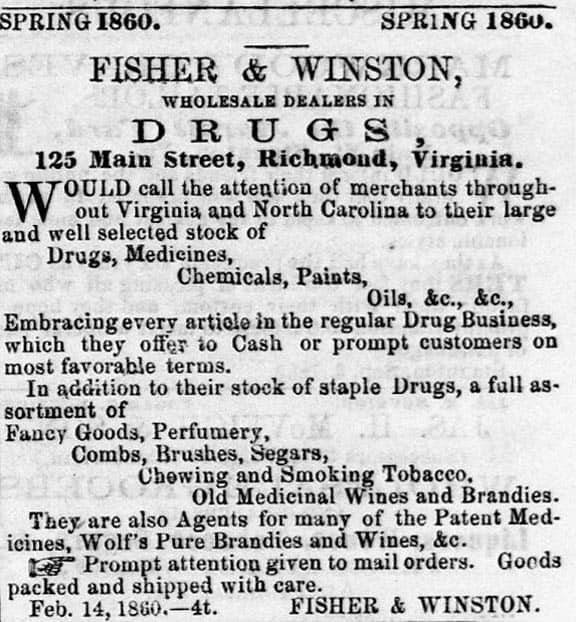 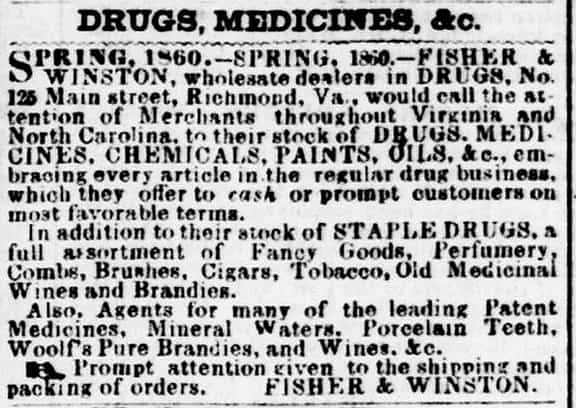 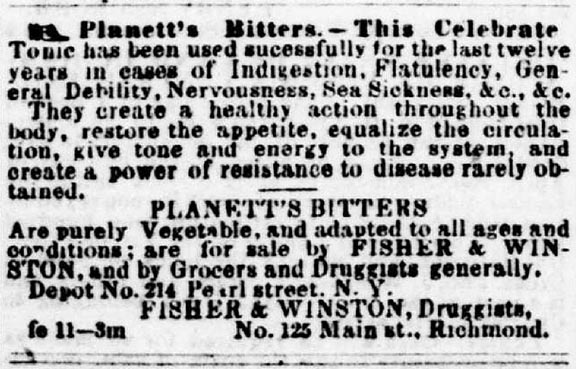 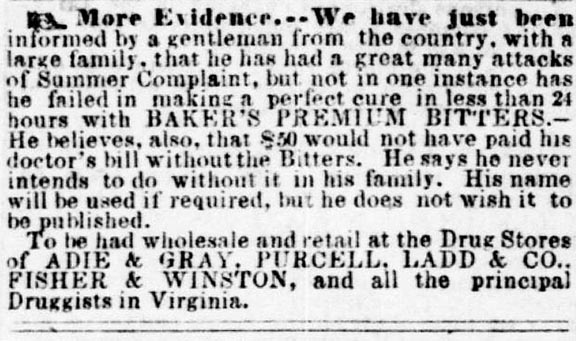 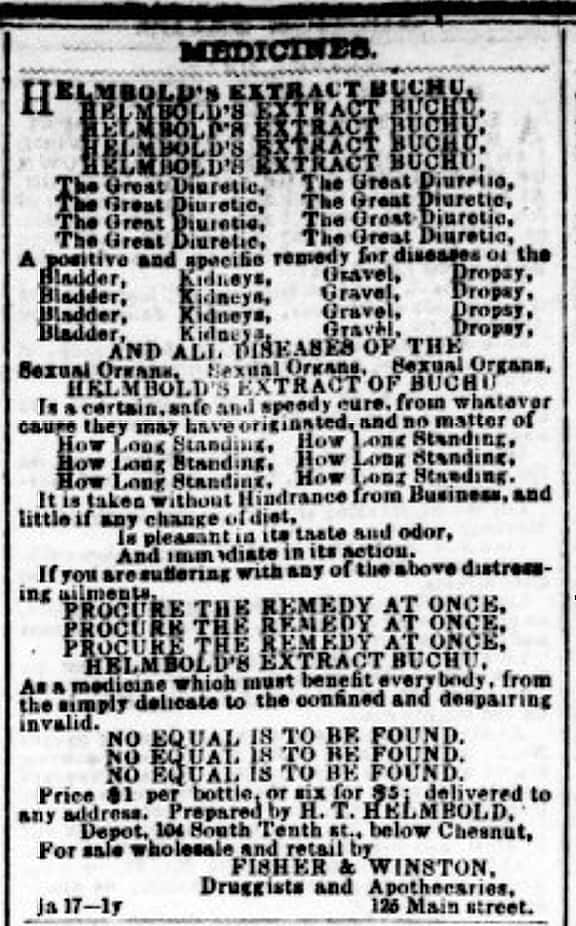 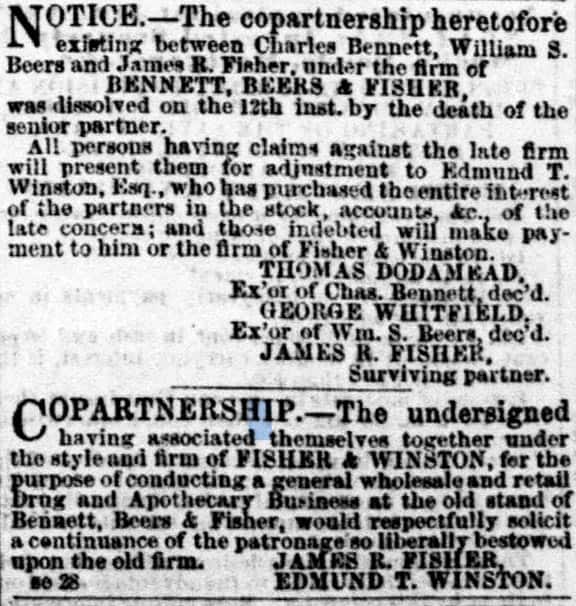 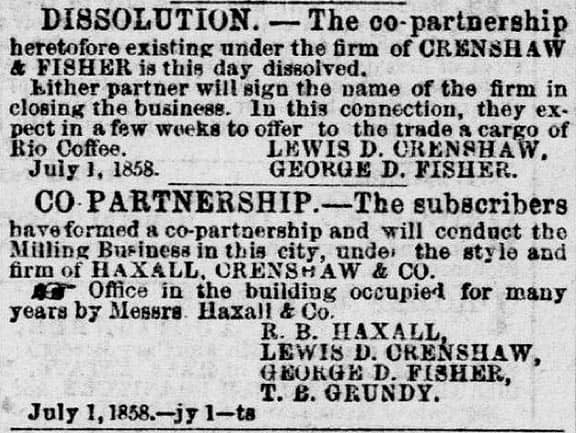 Crenshaw & Fisher (George D. Fisher) Dissolution notice in 1858 – Richmond Dispatch July 1, 1858. George must have retired, moved on or passed on. There must be a relationship.

Ferdinand Meyer V is a native of Baltimore, Maryland and has a BFA in Fine Art and Graphic Design from the Kansas City Art Institute and School of Design. Ferdinand is the founding Principal of FMG Design, a nationally recognized design consultation firm. Ferdinand is a passionate collector of American historical glass specializing in bitters bottles, color runs and related classic figural bottles. He is married to Elizabeth Jane Meyer and lives in Houston, Texas with their daughter and three wonderful grandchildren. The Meyers are also very involved in Quarter Horses, antiques and early United States postage stamps. Ferdinand is the past 6-year President of the Federation of Historical Bottle Collectors and is one of the founding members of the FOHBC Virtual Museum.
View all posts by Ferdinand Meyer V →
This entry was posted in Advertising, Bitters, Druggist & Drugstore, History, Medicines & Cures and tagged Bishop, Druggist & Drugstore, Edmund, Fisher, Frank, George, James, Richmond, Virginia, Winston. Bookmark the permalink.