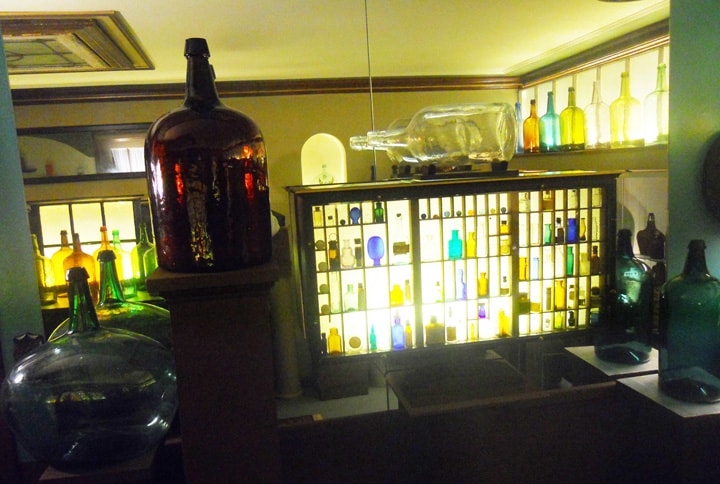 Having fun in the bottle room with mirrors, lights and camera. Not the
best quality photo, should have used a phone! – Gene Ainsworth

Here we go with the November 2013 group of pictures culled from a few of the Facebook sites. It looks like color is really dominating the collection this month. 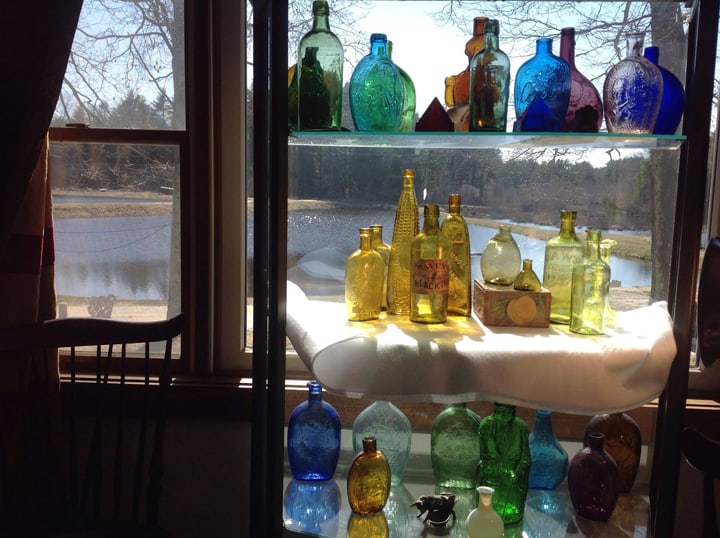 Brighten Up Your Day – Dave Olson 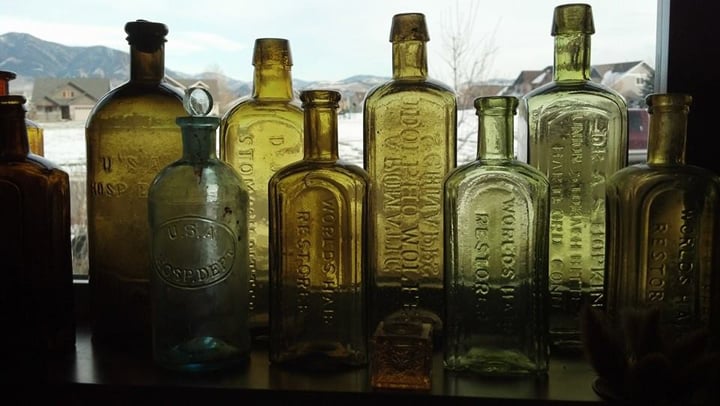 Thanksgiving bottles and thankful to all my bottle friends and wonderful hobby. Just took these pics. Sun is out but snow on ground time to finish an outhouse now. – James Campiglia 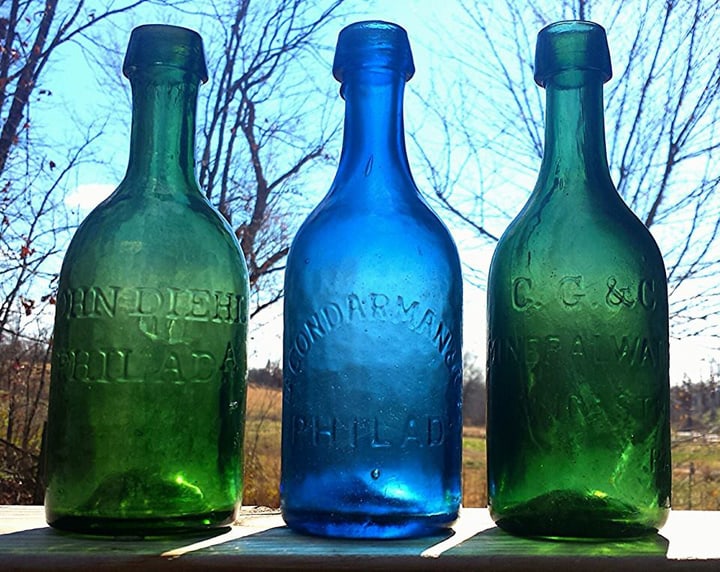 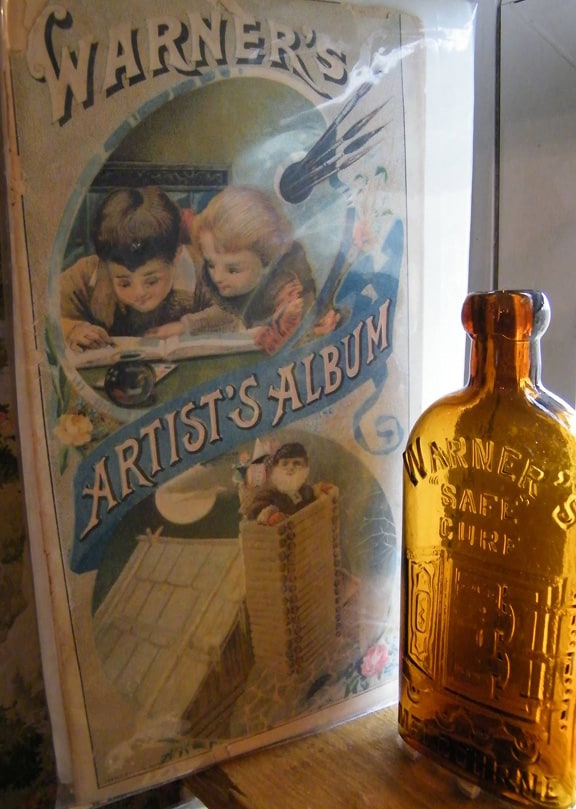 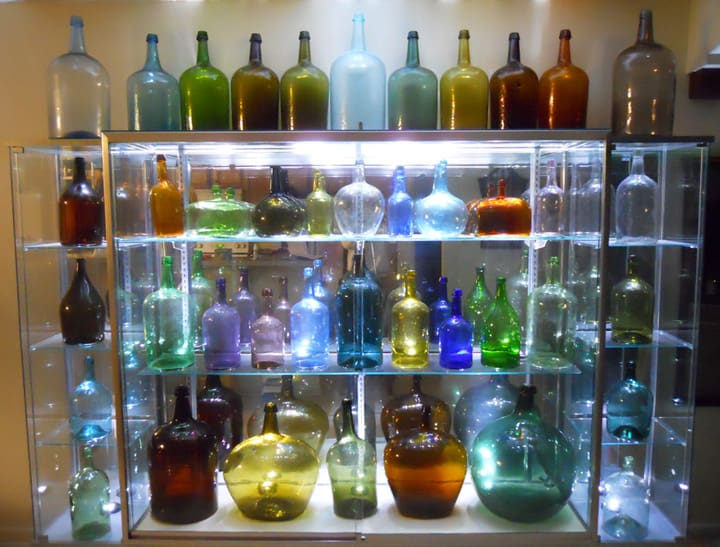 Wanted to share a somewhat fuzzy picture of a few demijohns, some are rather ordinary and some are not so ordinary. Hey Dale, you gotta have a lot of room to collect demijohns! – Gene Ainsworth 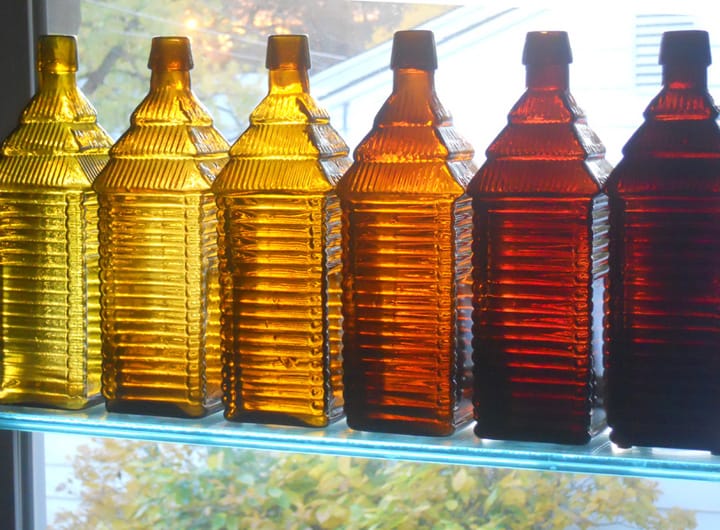 Trying to arrange an autumn colored line-up of Drake’s to go along with the season, so I left the 7-up green and cobalt examples out of the picture.Also thinking of asking the neighbors if I can knock their house down so my bottle pictures come out better (: – Gene Ainsworth 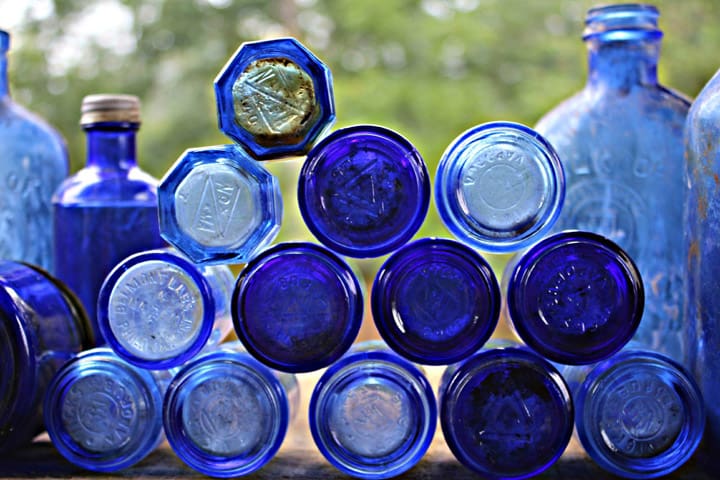 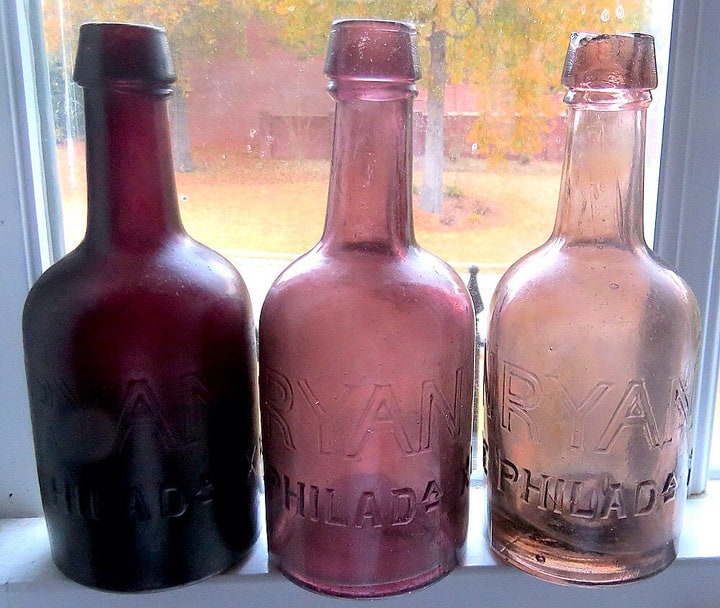 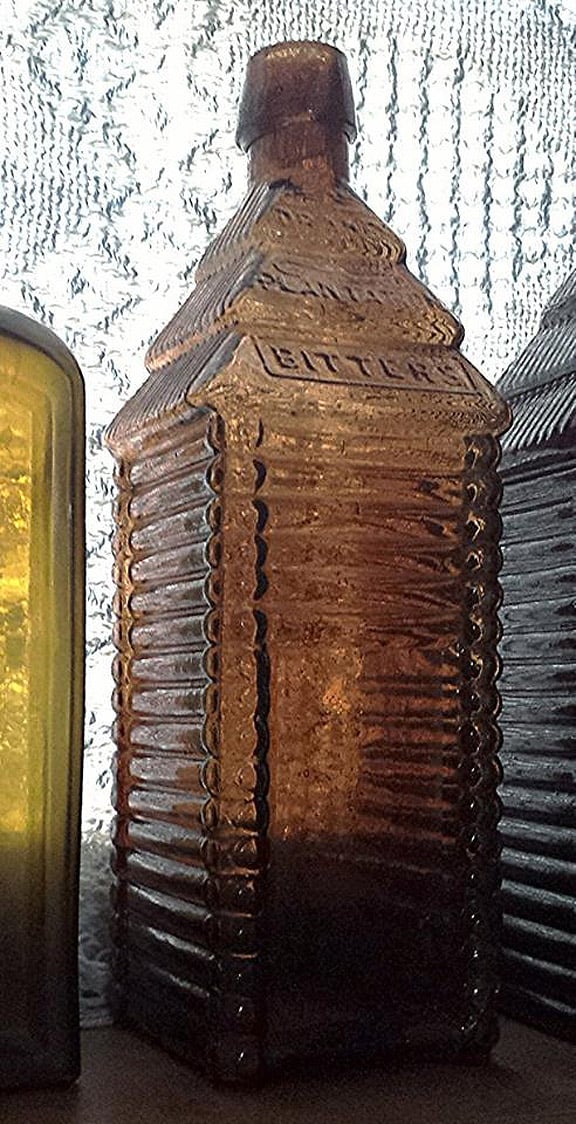 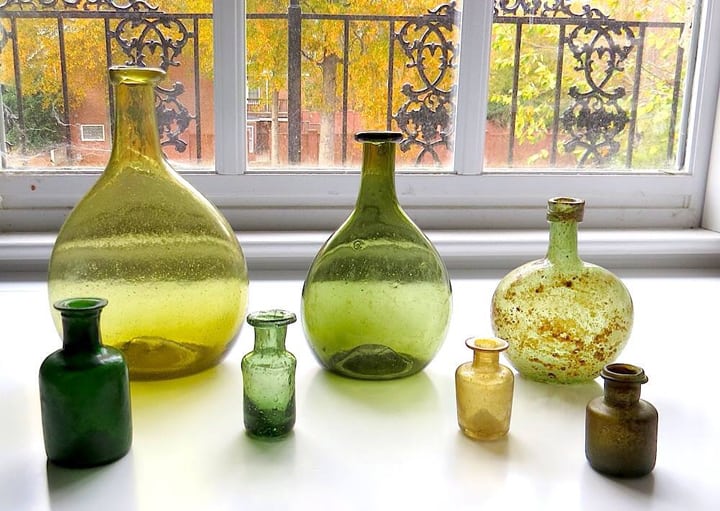 Decided to post some diminutive and crude pontils. For size reference, the Chestnuts measure approximately 7 and 5 1/2 inches in height. – Mike Newman 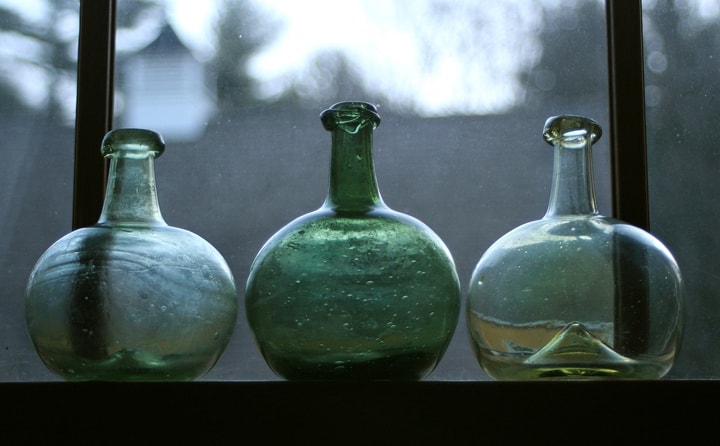 German influence, and probably all from there. But… I still keep coming back to the fact that many American glass factories in the US during the mid-late 18th century were comprised of German glassblowers, and of such traditions. It doesn’t matter really where they were made… it’s just funny that the one on the right is a new acquisition (yesterday!) and came from Manchester CT, one in the center was from a Maine estate, and the one on the left was found in NH by Boo Morcom. They all have differences, but a very similar style… miniature glob with slightly flattened sides. Dark 6:00am pic… – Michael George 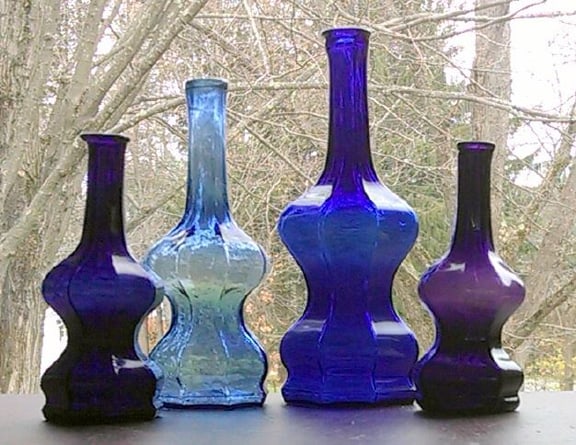 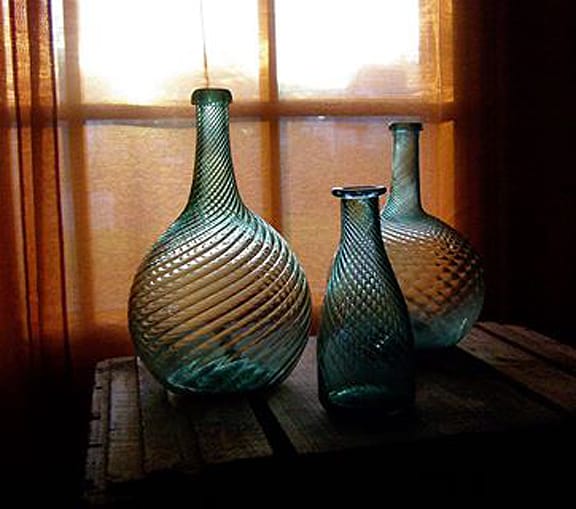 Someone mentioned recently that aqua pieces should not be dismissed.
I agree. – Woody Douglas 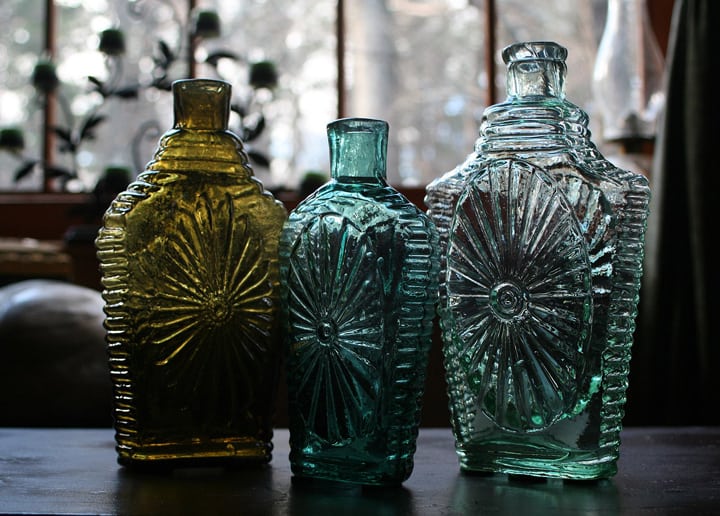 One mold maker obviously thought that there should be a sun (or bullseye) in the center of a sunburst! Here are a few of them. – Michael George 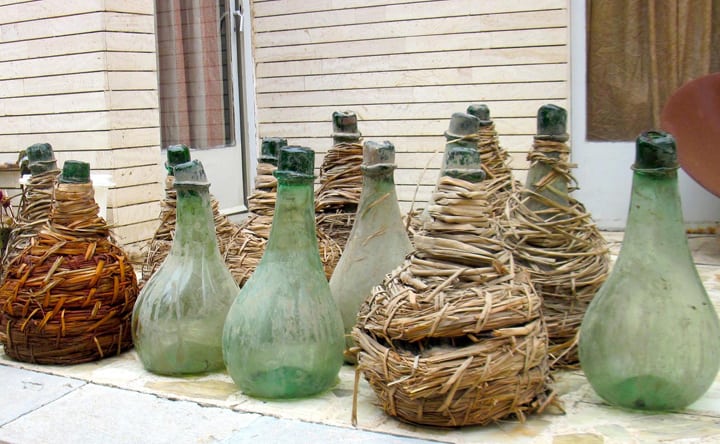 These amaze me – look at the darker lips, look at the crudity of the body. And what amazes me, you ask? The gentleman who owns these (150 of them) – doesn’t want to sell them because he still uses them for transporting grape and lemon juice to market!!! They are very likely 20th century – the quality of the glass and the method of lip finish show that. But fascinating that they still weave protective fabric and move product around in these bottles. – Phil Culhane 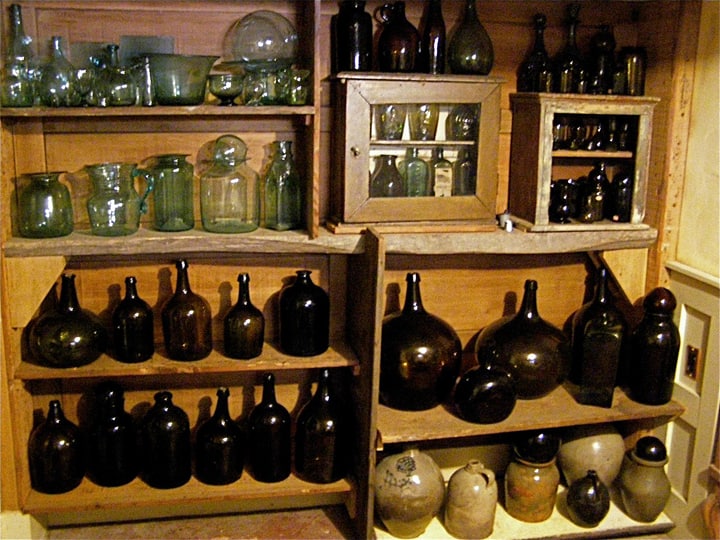 After giving it a lot of careful thought and consideration I’ve come to the conclusion that I have developed a fondness for early American glass. – Woody Douglas 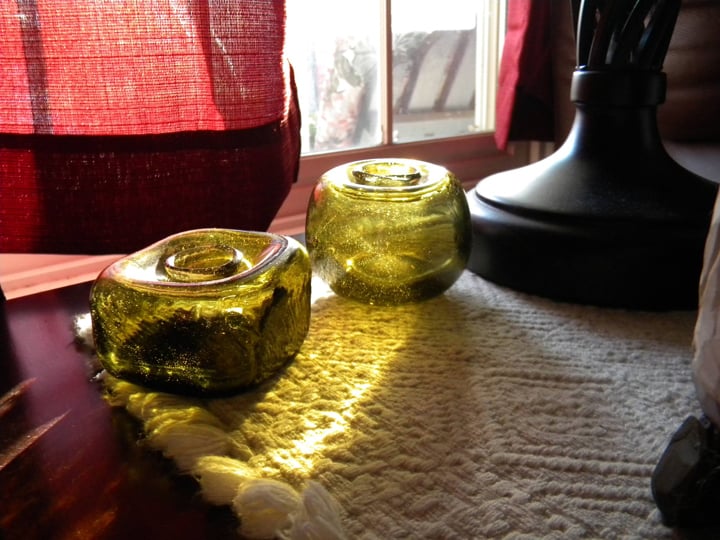 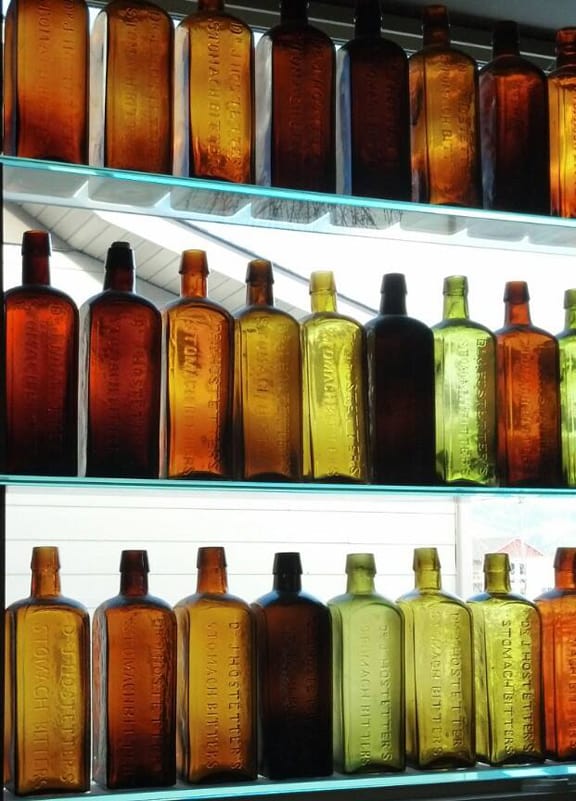 The many colors of Hostetter’s. Just some of a few I have gathered. It was my first bottle my grandma gave me. 35 years ago. – James Campiglia 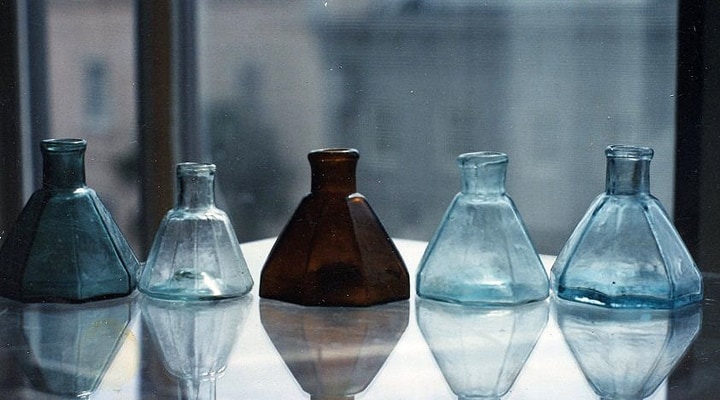 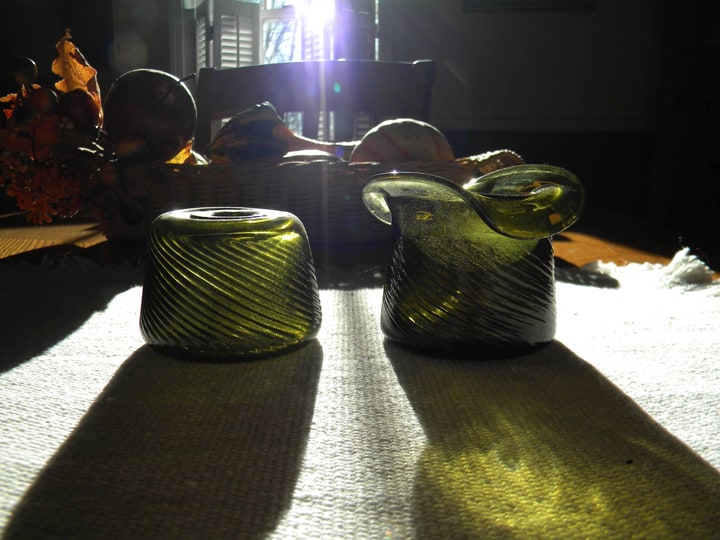 Ferdinand Meyer V is a native of Baltimore, Maryland and has a BFA in Fine Art and Graphic Design from the Kansas City Art Institute and School of Design. Ferdinand is the founding Principal of FMG Design, a nationally recognized design consultation firm. Ferdinand is a passionate collector of American historical glass specializing in bitters bottles, color runs and related classic figural bottles. He is married to Elizabeth Jane Meyer and lives in Houston, Texas with their daughter and three wonderful grandchildren. The Meyers are also very involved in Quarter Horses, antiques and early United States postage stamps. Ferdinand is the past 6-year President of the Federation of Historical Bottle Collectors and is one of the founding members of the FOHBC Virtual Museum.
View all posts by Ferdinand Meyer V →
This entry was posted in Collectors & Collections, Display, Photography and tagged Ainsworth, Bohrn, Brauser, Campiglia, Culhane, DeMarsh, Flint, gallery, George, GII-15, Hanshew, Keefert, Marshall, Newman, November, Olson, photography, Ryan, Tim Henson. Bookmark the permalink.