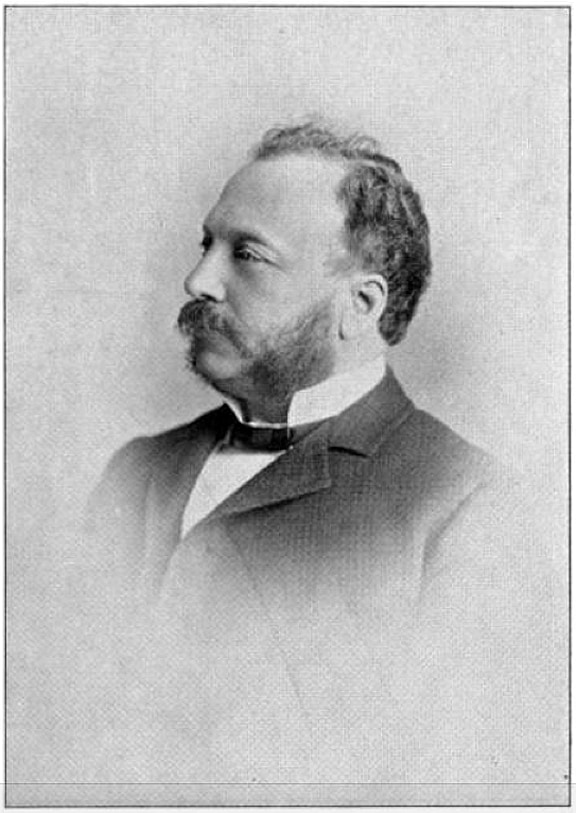 My father, Alfred William Henry Gianelli, was the son of Charles A. Gianelli who was the first born to Angelo M. F. and Fanny Compain.

As a bottle, and specifically a bitters collector, I pause instantly when I see or hear the Gianelli name, as I know we will be soon talking about the great, Royal Italian Bitters. You may remember the post earlier in the year, Royal Italian Bitters by A.M.F. Gianelli – Montreal where we explored the fascinating history surrounding this bottle. You may also have noticed the example on ebay recently posted by Abel Da Silva. 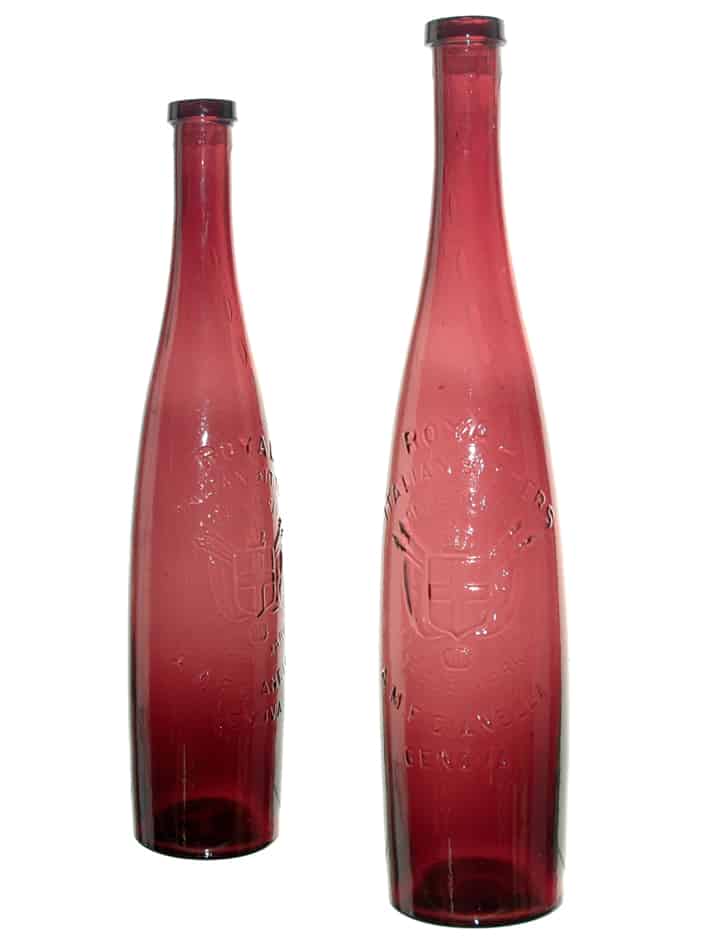 We now have a new communication from Deborah Gay Gianelli whose great, grand-father was Angelo M. F. Gianelli (pictured top of post). Ms. Gianelli is now the proud owner of this bottle which will now accompany other treasured pieces from her family history. Deborah has been kind enough to share some more information on Angelo M. F. Gianelli.

My father, Alfred William Henry Gianelli, was the son of Charles A. Gianelli who was the first born to Angelo M. F. and Fanny Compain. So, Angelo M.F. was my great-grandfather. I am attaching a photo from my Grandfather Charles’ scrapbook that shows him (Charles) with his mother (Fanny) and father (A.M.F.) and Charles’ younger brother, Alfred. Obviously Charles later named his son, my father, after his brother.

I am attaching the following from my grandfather’s scrapbook:

1) A portrait (below) from 1903 taken at a Gianelli family reunion in Niagara-on-the-Lake. In the center are AMF and Fanny. To AMF’s immediate left is my grandfather, Charles. The child in the lap of my grandfather is my father, Alfred. Yes, that child is a boy! 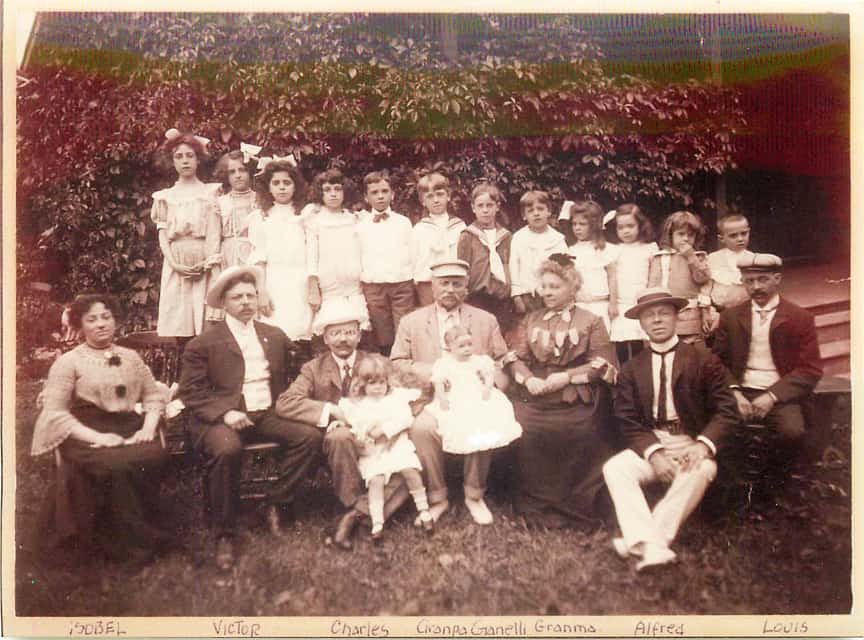 2) A photo of AMF, Fanny, and their two children, Charles (Carlo) and Alfred (below). 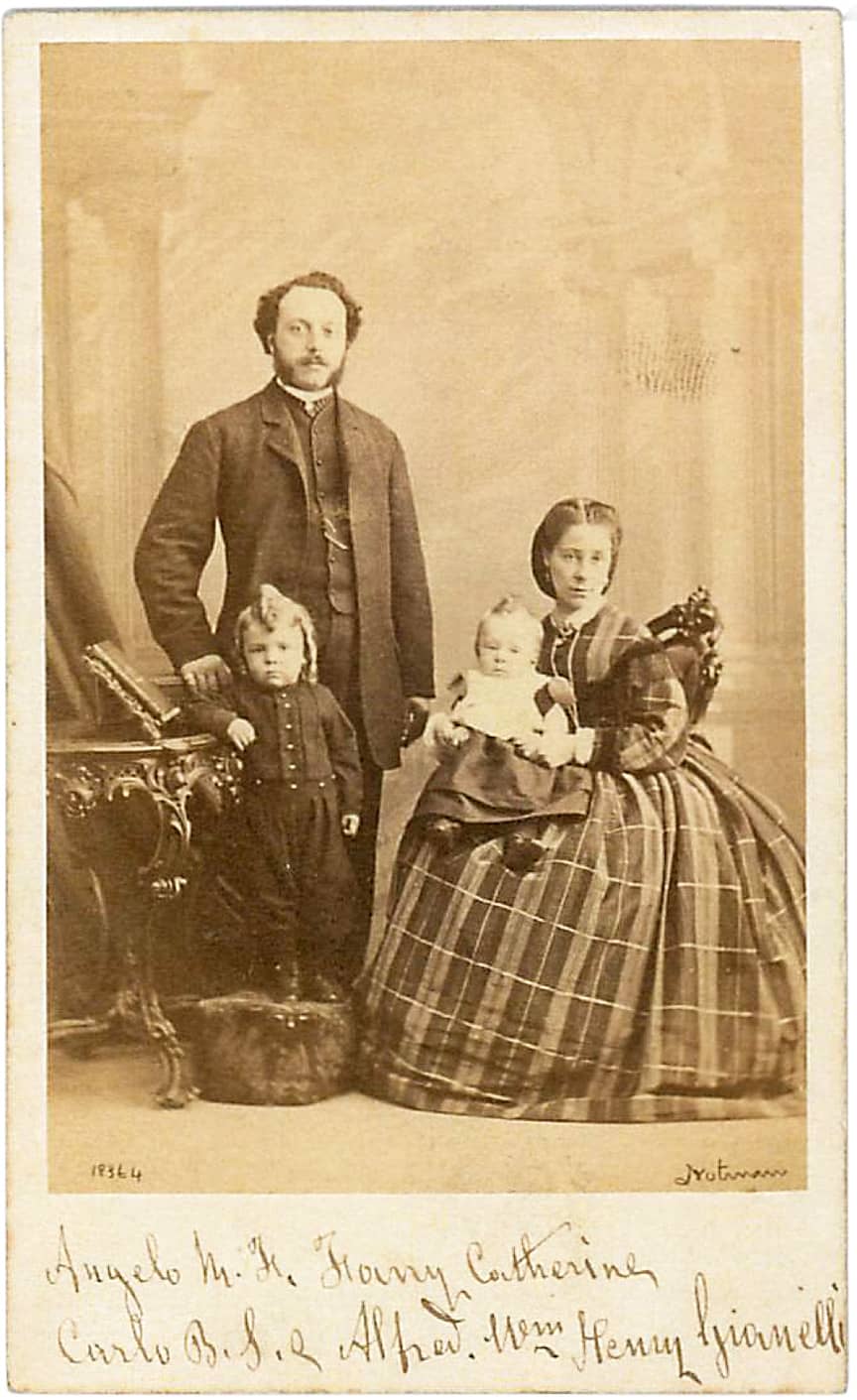 3) Newspaper articles (see below) about the beatification of Antonio Maria Gianelli. My father said many times he was related to a Saint. I cannot confirm this YET (the relation). But I am trying. I have learned that Antonio Maria Gianelli died on June 7, 1846 and was declared a Saint by Pope Pious XII on October 21, 1951. My grandfather never knew this, as he died in 1950. In 1829, Antonio Gianelli (then a bishop) founded the Sisters of Our Lady of the Garden. There is a related convent here in the U.S. with three locations, one in Connecticut and two in NYC. The name here in the U.S. is “Daughters of Our Lady of the Garden.” They acknowledge Saint Gianelli as their founder and even have a Gianellian Youth Group. I have spoken with one of the sisters and she mentioned they once had a visit from a Thomas Gianelli who lived in California (and was related). I tried to reach him, but he had died and his widow could not explain the connection. 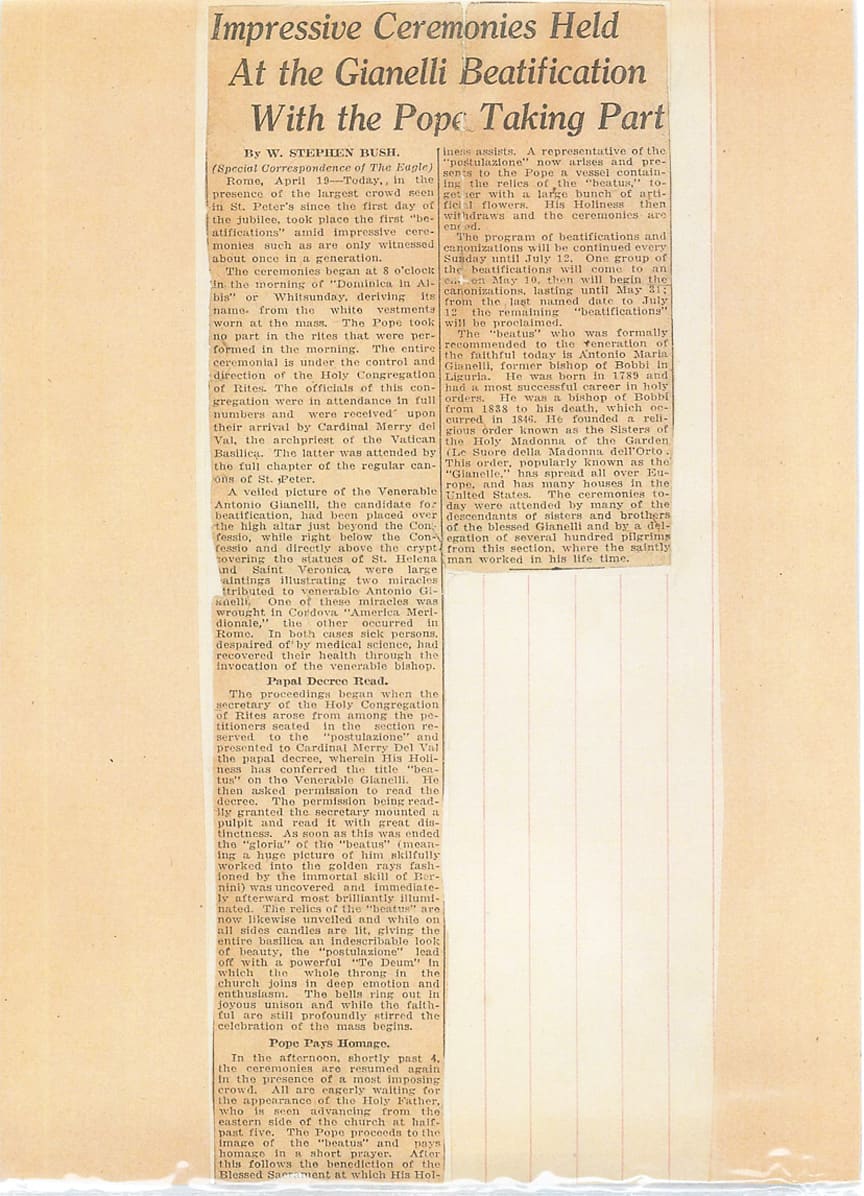 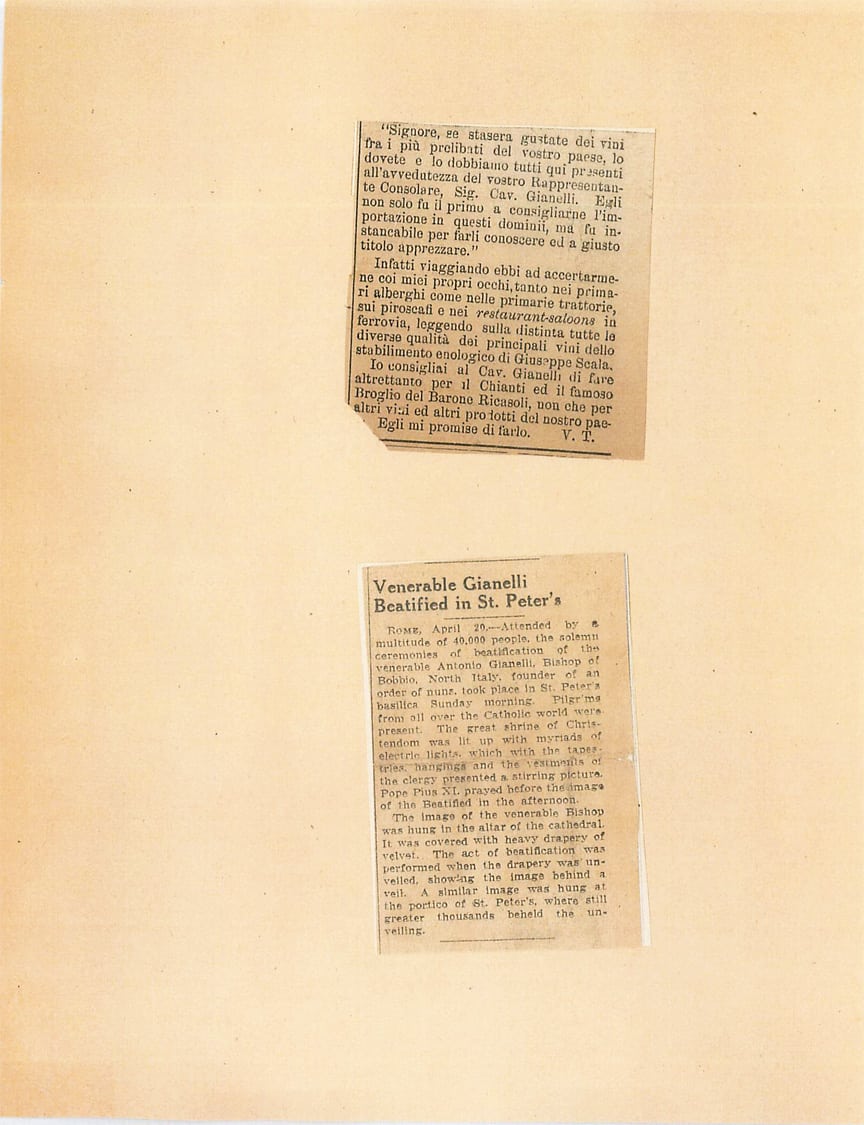 4) A newspaper article (see below) about AMF’s attendance at a banquet in Philadelphia. 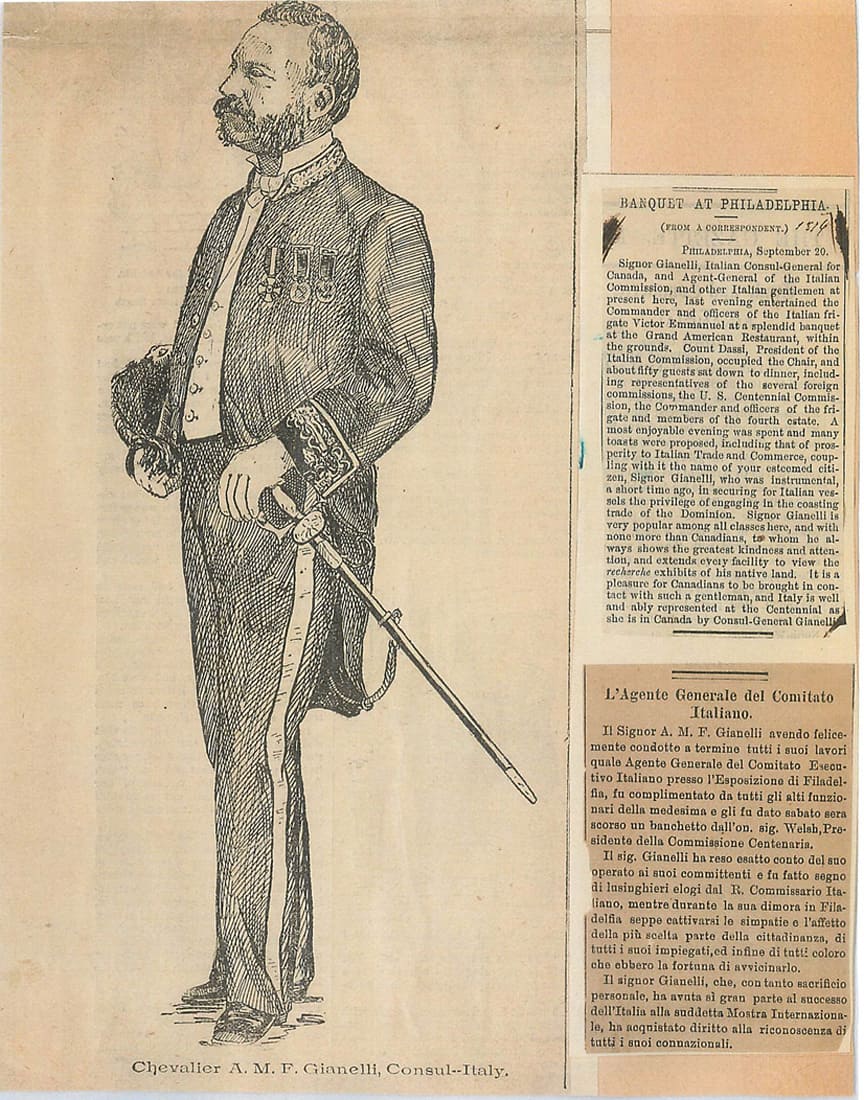 5) A certificate from the United States Centennial Commission awarding a special bronze medal to my great-grandfather. 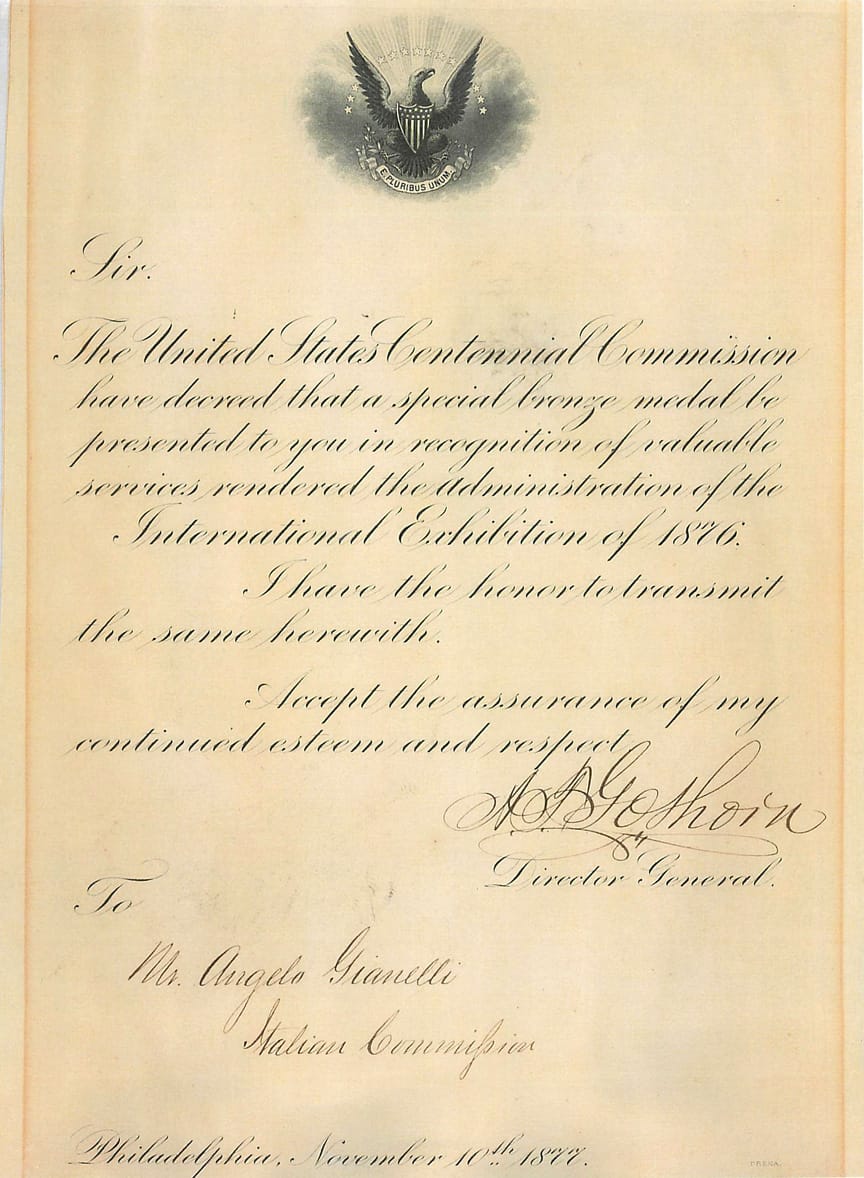 Thank you so much.

Ferdinand Meyer V is a native of Baltimore, Maryland and has a BFA in Fine Art and Graphic Design from the Kansas City Art Institute and School of Design. Ferdinand is the founding Principal of FMG Design, a nationally recognized design consultation firm. Ferdinand is a passionate collector of American historical glass specializing in bitters bottles, color runs and related classic figural bottles. He is married to Elizabeth Jane Meyer and lives in Houston, Texas with their daughter and three wonderful grandchildren. The Meyers are also very involved in Quarter Horses, antiques and early United States postage stamps. Ferdinand is the past 6-year President of the Federation of Historical Bottle Collectors and is one of the founding members of the FOHBC Virtual Museum.
View all posts by Ferdinand Meyer V →
This entry was posted in Bitters, History and tagged Abel Da Silva, Alfred, Angelo, Angelo M. F. Gianelli, Antonio, bitters, Compain, Deborah Gay Gianelli, Gianelli, Italian, Montreal, Niagara, Royal. Bookmark the permalink.