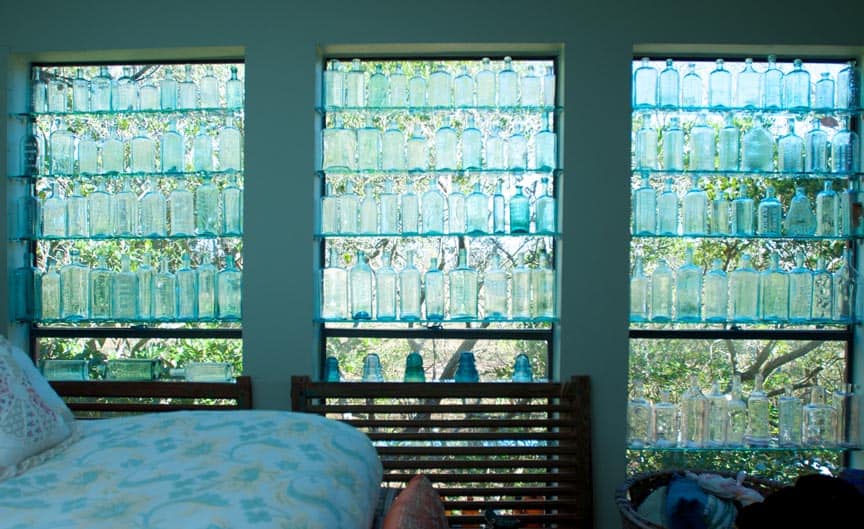 Finding an advertisement for a Dr. Warrens Bilious Bitters in the Halifax Morning Sun, on March 12, 1866 (pictured below) prompted this post. I knew I had an example somewhere in my ‘Aqua Room’ and thought it might be a good time to look at the brand. There are two sizes, the large at 7 5/8 inch and the smaller, which I have, at 6 3/8″ tall. The Carlyn Ring and W. C. Ham listing in Bitters Bottles is as follows: 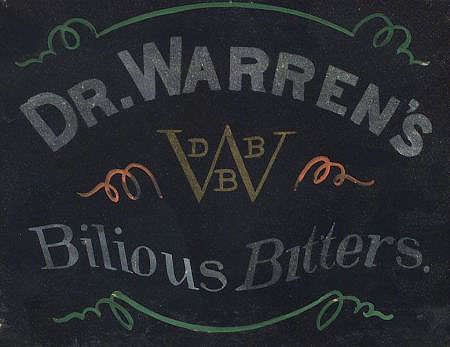 John A. Perry and Milo S. Burr opened a Patent Medicine business at 1 Cornhill, in Boston in 1853. They were listed the same until 1855, when Perry left. Starting in 1856, the company was called Milo S. Burr & Co (Henry B. Foster and G. L. Seaver). Burr seemed to have a habit of taking in partners for a couple of years, and when they left their preparations stayed with him. Burr got rid of Foster in 58, in 59 he picked up G. H. Reed, then got rid of Seaver by 1860.

According to the Wilsons, Perry threw in with J. Russell Spalding after leaving Burr, and they were partners until around 1880. Perry, in 1864 was listed as an Apothecary on Well’s Block in Manchester, New Hampshire. In 1867, Perry was again listed together with Milo S. Burr. M. S. Burr & Co. was then at 26 Tremont Street. He was there at least until 1871; in 72 he was on his own again at 144 Northampton, and by 1873 he had moved to 623 Shawmut Ave. Starting in 1875, Albert Q. and Thomas De Q. Perry Joined John in the Apothecary business. They were probably his sons. The family business of John A. Perry & Co. continued until 1879. [Hair Raising Stories]

Label: For purifying the blood, curing liver complaint, jaundice, sour stomach, heartburn, loss of appetite, faintness, dizziness, headache, pain in the side, back and loins, general weakness and debility, cold and fevers, fever and ague, eruptions on the skin, humors of the blood, costivess, piles and all diseases caused by impure blood or a deranged condition of the stomach, liver or bowels.

Boston Directory: John Perry and Son are listed as merchants from 1810, as apothecaries in 1875 and as liquor merchants in 1885. From 1870, the bitters were produced by Burr & Perry.

Advertisement: Dr. Warrens Bilious Bitters advertisement (pictured below) – The Provincial Almanack for the year of Our Lord 1865

Passage: When in Harvard College, many years ago, I heard the eminent Dr. Warren say,—”Boston sacrifices hundreds of babes every year by not clothing their arms.” – 1896 Medicine, Vassar College 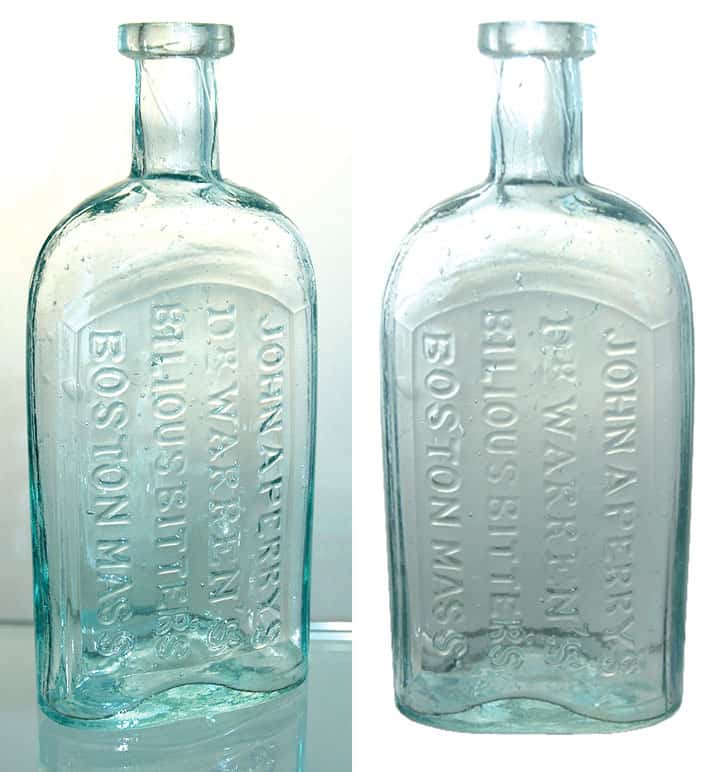 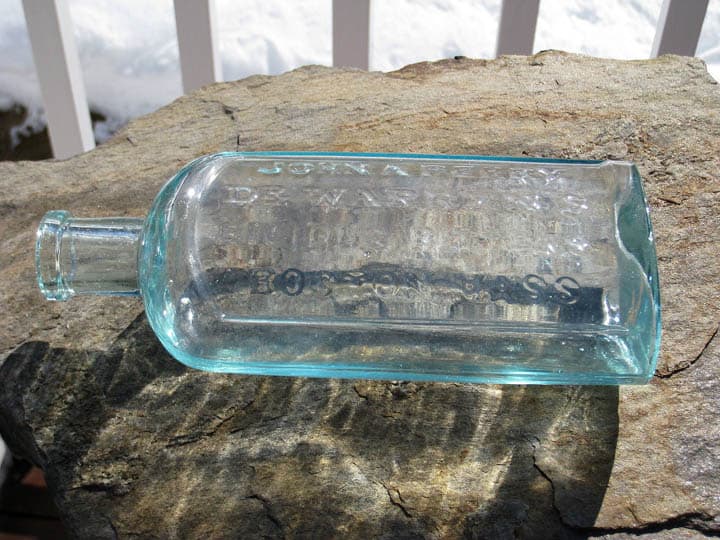 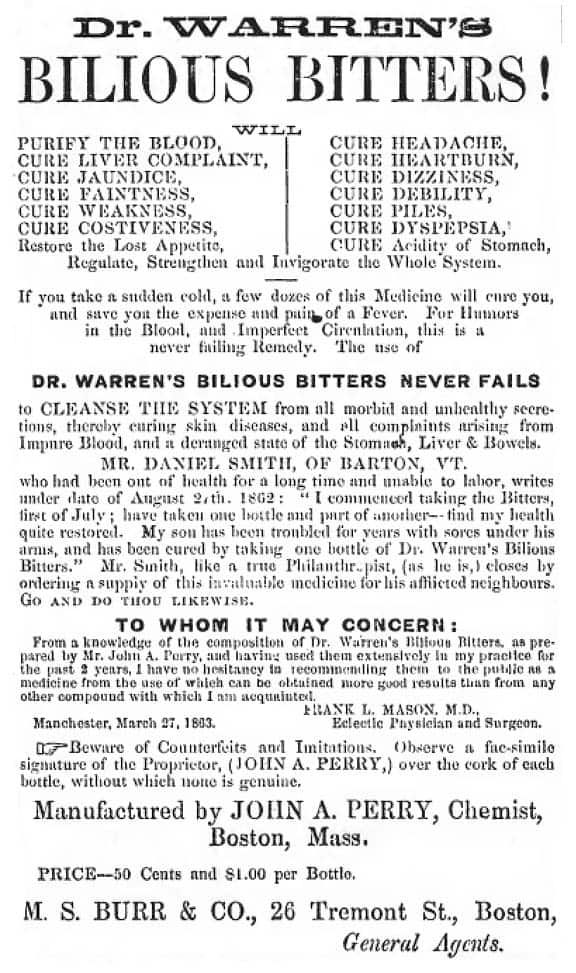 Dr. Warrens Bilious Bitters advertisement – The Provincial almanack for the year of Our Lord 1865 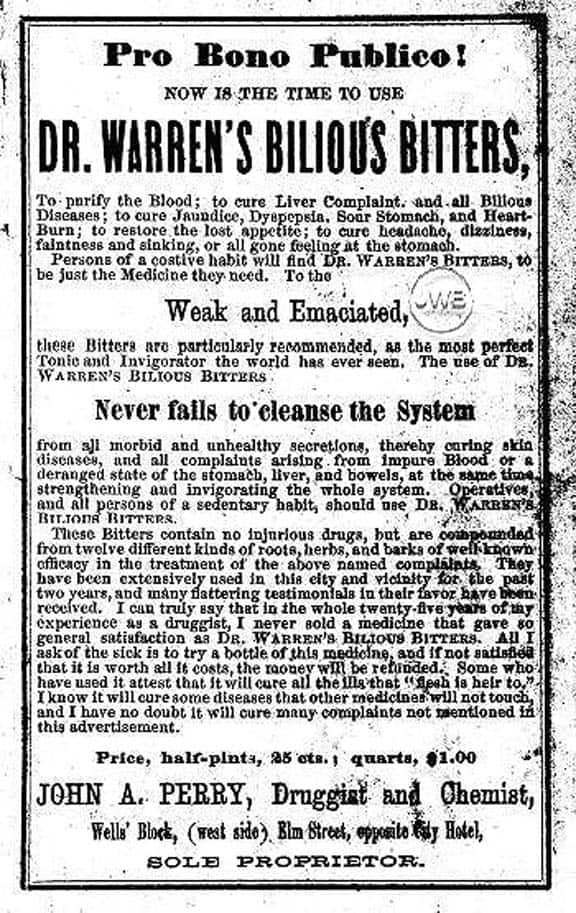 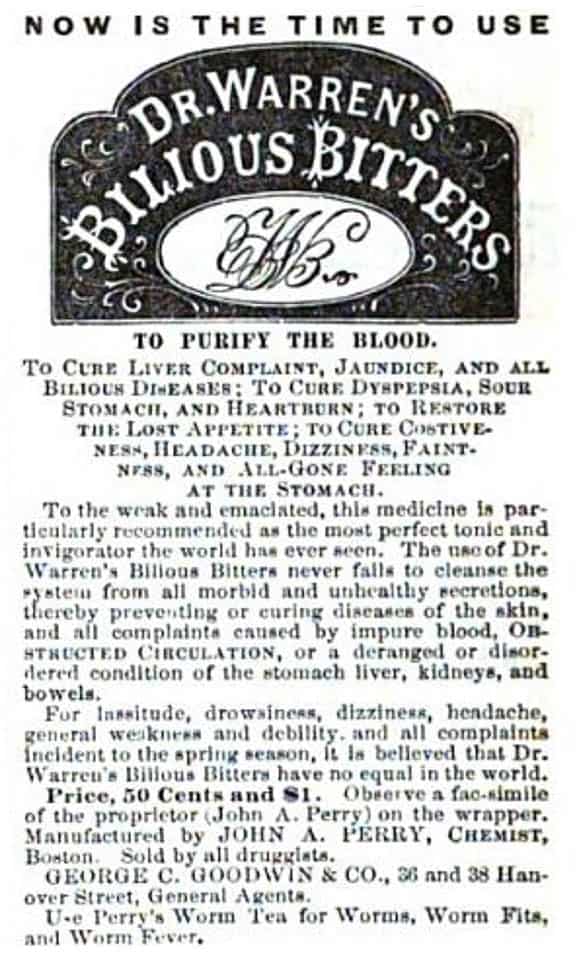 Ferdinand Meyer V is a native of Baltimore, Maryland and has a BFA in Fine Art and Graphic Design from the Kansas City Art Institute and School of Design. Ferdinand is the founding Principal of FMG Design, a nationally recognized design consultation firm. Ferdinand is a passionate collector of American historical glass specializing in bitters bottles, color runs and related classic figural bottles. He is married to Elizabeth Jane Meyer and lives in Houston, Texas with their daughter and three wonderful grandchildren. The Meyers are also very involved in Quarter Horses, antiques and early United States postage stamps. Ferdinand is the past 6-year President of the Federation of Historical Bottle Collectors and is one of the founding members of the FOHBC Virtual Museum.
View all posts by Ferdinand Meyer V →
This entry was posted in Apothecary, Bitters, Collectors & Collections, Druggist & Drugstore, Holiday, Liquor Merchant, Medicines & Cures and tagged Bilious, bitters, Boston, Burr & Perry, Dr. Warrens, Halifax, John Perry, Milo S. Burr. Bookmark the permalink.