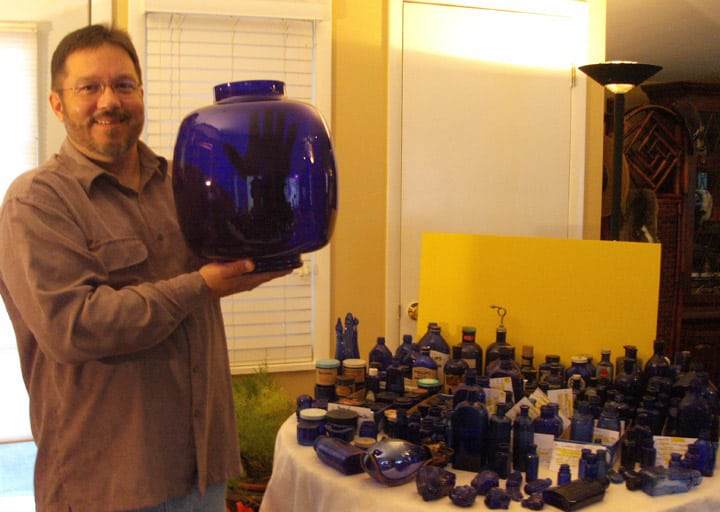 My name is Charles Brown and with such a name I changed it to Chuck very early in my life with most people not putting together Charlie Brown. Some got it, and most did not.

Today, my collection consists of dinnerware in lighter blue to religious icons on blue mirrors to more vases, inks, manufacturing bottles to lenses to runway lights.

I started collecting cobalt blue glass when I was 18 years old. An elderly lady who lived close by had sixteen total pieces. Eight of these blue vases were in two separate windows. I admired them for the way they looked in her window with the tallest vases in center and corresponding smaller vases at the end of her window. This pair of windows reminded me of stained glass windows in a church. These blue pieces were so rich in appearance. I felt privileged when she offered to sell them to me. She knew I felt the same and I told her that I wanted to have first bid when she moved. I paid her $200, which was not cheap to me being of that age. 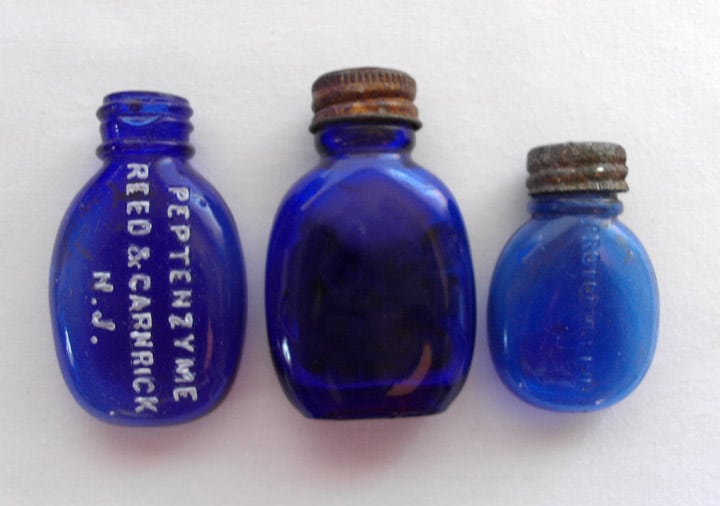 That was the beginning of my windows being in blue. Over the next thirty years, I would encounter other blue pieces at garage sales and flea markets. Some years would be plentiful and other years blue glass would be scarce to find.  I started out with vases only. Then 15 years later, I had plenty and would buy anything in cobalt blue glass. Then I was finding ink bottles, old perfumes containers, and manufacturing bottles such as Vicks and Noxema. 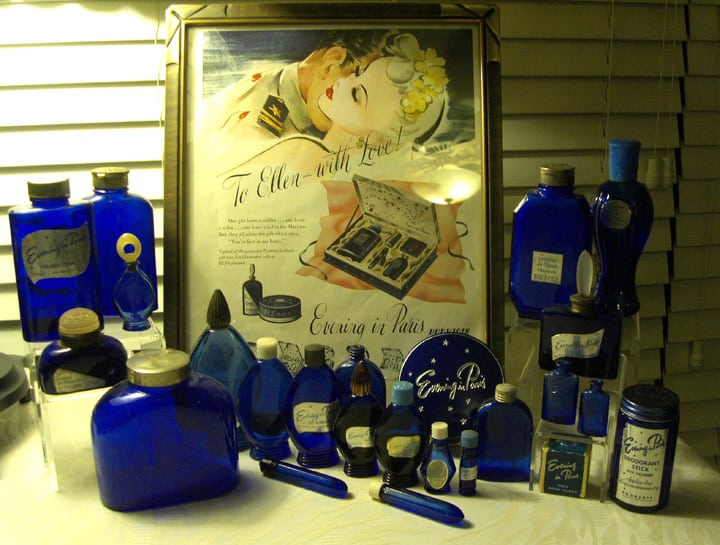 Later, I was finding more on ebay and on the internet. All of a sudden, I was finding run-way lights and such. On a visit to New England I found a police call light globe and had to have it. Just as luck would have it, I then found a cobalt blue Mazda light bulb used in sets and or production lighting. I would go home and re-do my collection to fit my newly acquired pieces in.

Then came pharmacy bottles and before I knew it, I had so much blue that I had to pack much of it away as my only china cabinet was beyond full.  I started to research the subject of cobalt blue glass. This is where I got to thinking. I should write a book since the only book I could find was Clements paperback showing her collection. Some pieces were named and some were not. I found, with a whole lot of research, that cobalt blue glass was often a test color with a lot of my vases being made for florists. The chemical compound was cobalt, silica and sand but with not much more about how much it took to made the darker blues. And why was this so hard to find out? Was this cobalt safe? To this day, I have never researched about something so hard. I knew that if this color was so difficult to find, was it more valuable, I wondered? I got frustrated and decided to  find as much as I could and would do the research later. 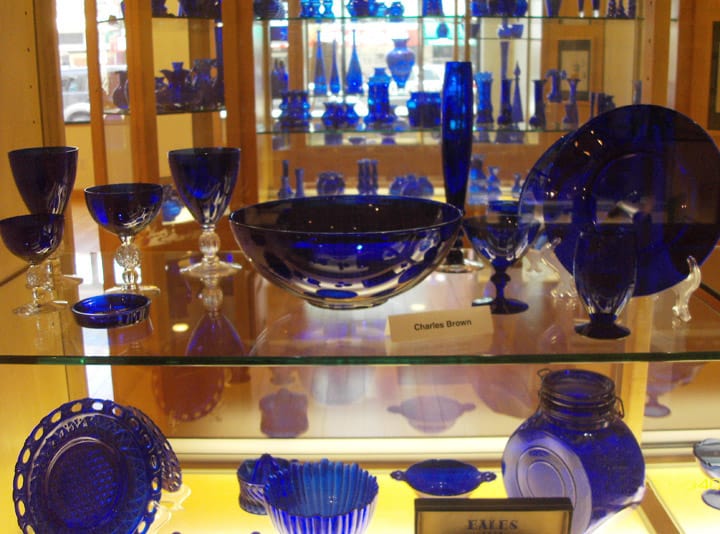 This blue color made me feel rich and if more would come my way, I would snatch it all up for my own satisfaction. Years later in 2009, while searching the web again, I found OhioGlassMuseum.org. I simply called them on the telephone and asked if they have ever had a cobalt blue exhibit and they told me “no, but would be interested in coming to Columbus to take a look.” They came and I had a great room full, all unpacked and sorted. The museum was impressed by how much I had and suggested moving the exhibit date to more in the future so I would be the main display using almost all of their show cases. I had to give two cases to Fostoria Glass. They wanted to run my exhibit for 3 months in the summer of 2009, so we did. I took the picture above and the three below from the exhibit. 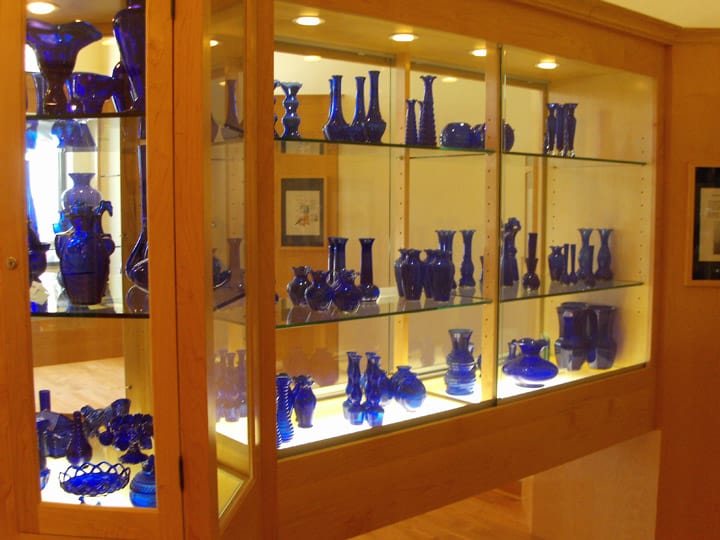 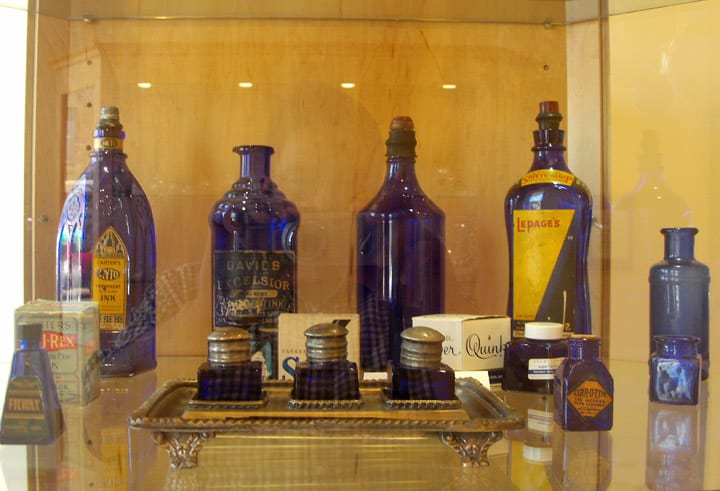 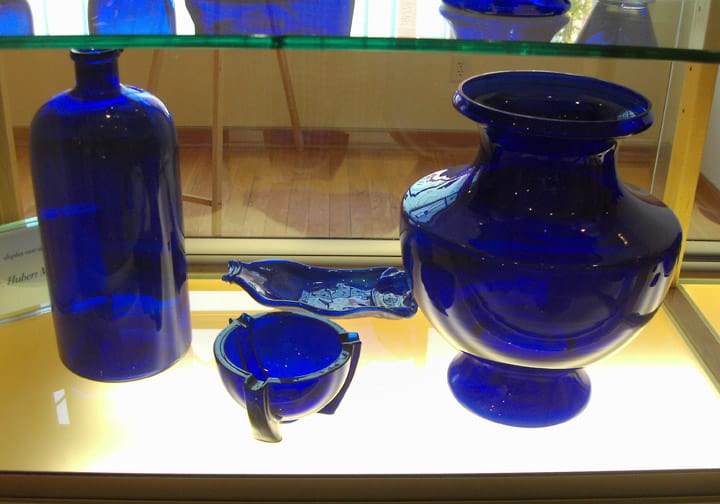 I was the curator for my display and was written up in the Columbus Dispatch newspaper and got the front page of Antique Week as well (see below). 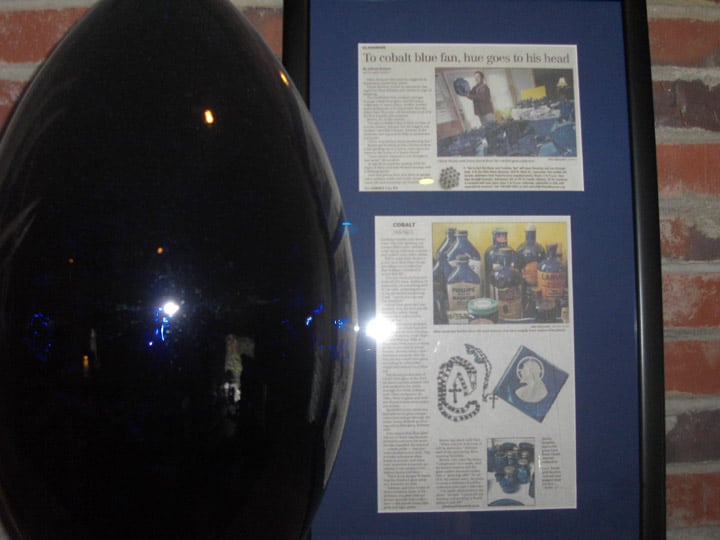 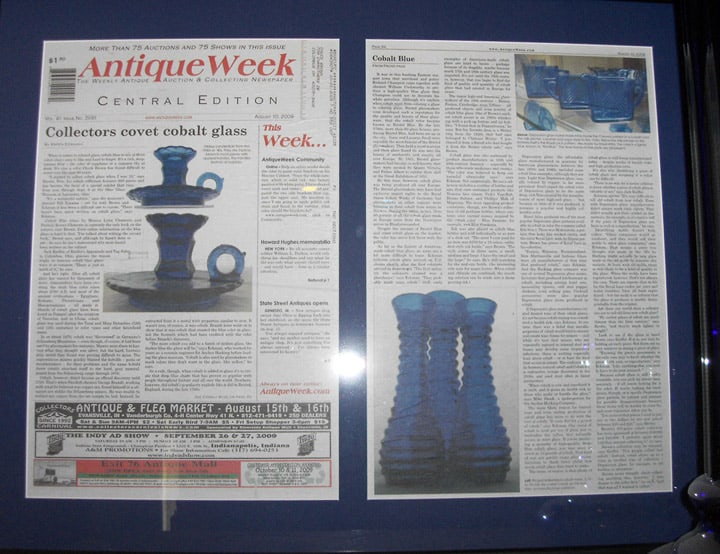 Today, my collection consists of dinnerware in lighter blue to religious icons on blue mirrors to more vases, inks, manufacturing bottles to lenses to runway lights. One of my favorite pieces is a Heisey cobalt blue ring (see picture below). A jewelry dealer bought this ring from a lady who went to the estate auction of Clarence Heisey. This ring was made for him and given to Clarence on his birthday. Then Tom the jewelry man sold it to my partner after he held onto the ring for 20-plus years. I got this ring for Christmas. My fingers were too big for the ring but the thought behind it, is priceless. I still find it hard to join a glass collector club because I have collected all blue and not from a particular manufacturer. 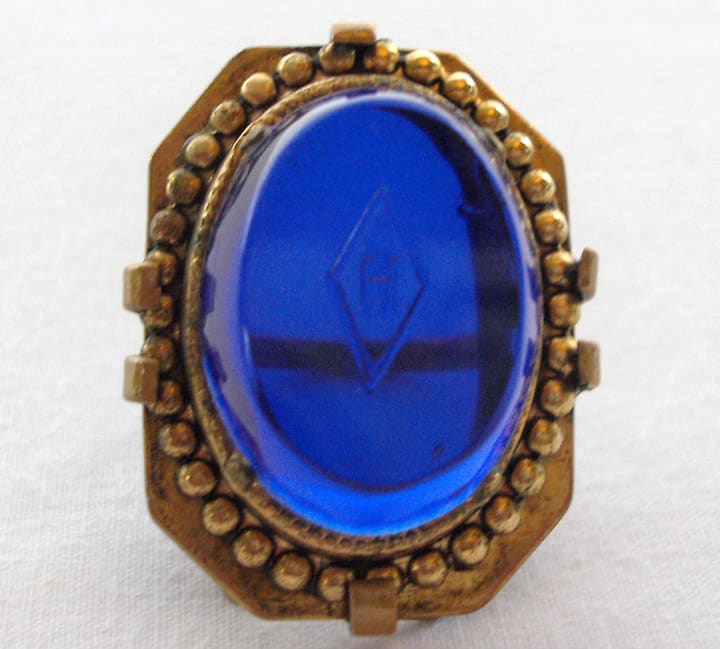 Regarding the Blue Aprill Gallery on Peachridge Glass (Read: The Charles & Jane Aprill Blue Gallery), I am so impressed for you (Charles and Jane) to have been in the World’s Fair! I loved your pictures and have found other cobalt blue collectors. I knew they were out there but I just never came across other collectors. As time permits, I am trying to get my web site up.

One last comment. I am so puzzled that cobalt blue is called so many other names such as ‘bristol blue’.

I am now thinking that all you glass collectors live in Texas. Have you met AnchorHocking.com? I spoke to him once and he is also in Texas with a museum next door to his house. My dream would be to have a museum but may have to get farther from the 45 minute drive which is where the Ohio Glass Museum is located in Lancaster, Ohio, home of Anchor Hocking. I hope this tells you something about me, Chuck Brown AKA ‘CobaltMan’.

Ferdinand Meyer V is a native of Baltimore, Maryland and has a BFA in Fine Art and Graphic Design from the Kansas City Art Institute and School of Design. Ferdinand is the founding Principal of FMG Design, a nationally recognized design consultation firm. Ferdinand is a passionate collector of American historical glass specializing in bitters bottles, color runs and related classic figural bottles. He is married to Elizabeth Jane Meyer and lives in Houston, Texas with their daughter and three wonderful grandchildren. The Meyers are also very involved in Quarter Horses, antiques and early United States postage stamps. Ferdinand is the past 6-year President of the Federation of Historical Bottle Collectors and is one of the founding members of the FOHBC Virtual Museum.
View all posts by Ferdinand Meyer V →
This entry was posted in Article Publications, Collectors & Collections, Color, Color Runs, Digging and Finding, Display, Museums, Questions and tagged blue, brown, Charles, Chuck, CobaltMan, Heisey. Bookmark the permalink.