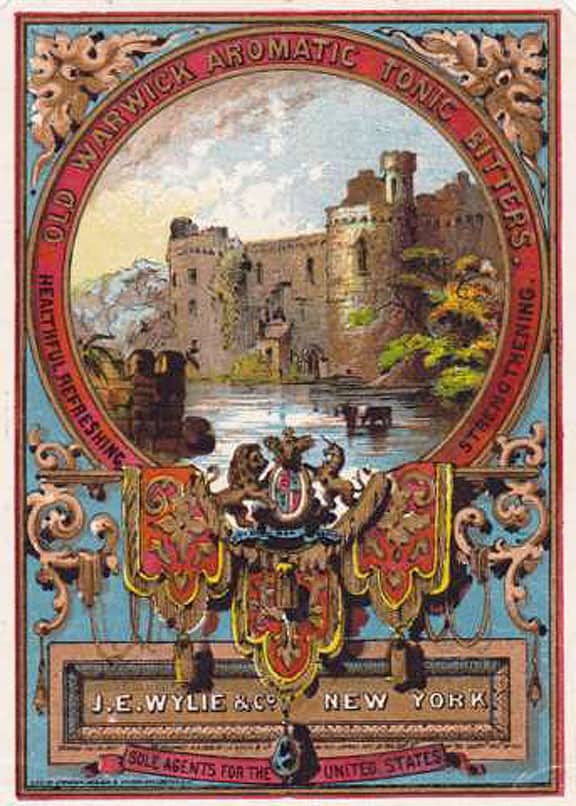 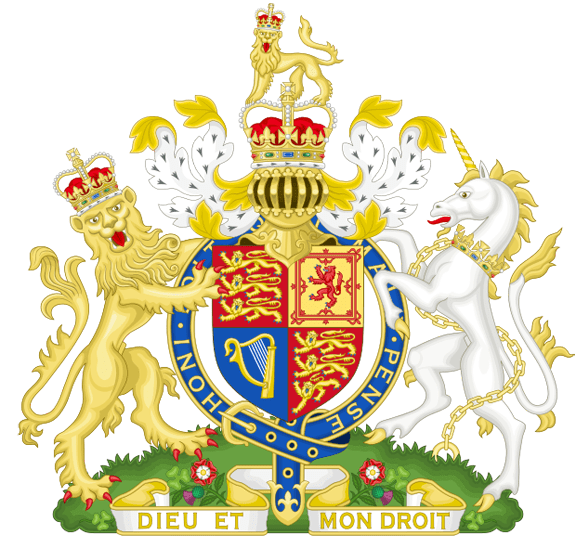 The incredible Old Warwick Aromatic Tonic Bitters label pictured at the top of this page was sent in by bitters trade card and ephemera authority Joe Gourd from his collection. The art was produced by the superb New York lithographers, Sarony, Major & Knapp.

Looking in Bitters Bottles, Bitters Bottles Supplement and my draft copy for Supplement 2 from Bill Ham, I see that this is yet another unlisted bitters label from Joe. Read about Tokay Cordial Bitters and Magendie’s Bitters, also affiliated with Sarony, Major & Knapp.

Checking for information online is fruitless. There are no J. E. Wylie or Old Warwick listings in or around New York, no bottles, no advertising….nothing. Extremely odd. Since Wylie & Co. were Sole Agents for United States we must look across the Atlantic. 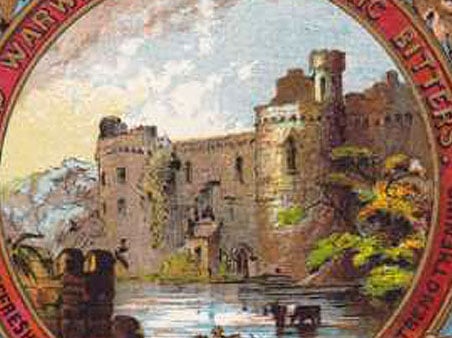 To do this, we analyze the art. Looking at the castle, I suspect that a corner of Warwick Castle is represented in the label illustration. 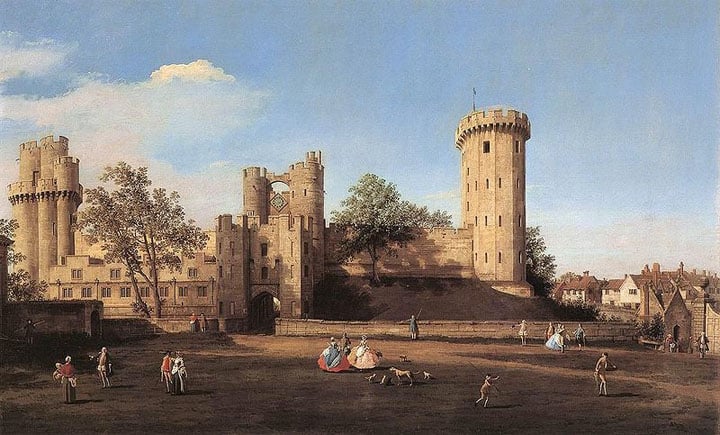 Warwick Castle, the East Front from the Outer Court (1752), painted by Canaletto, Birmingham Museum and Art Gallery, Birmingham. It is little altered today. 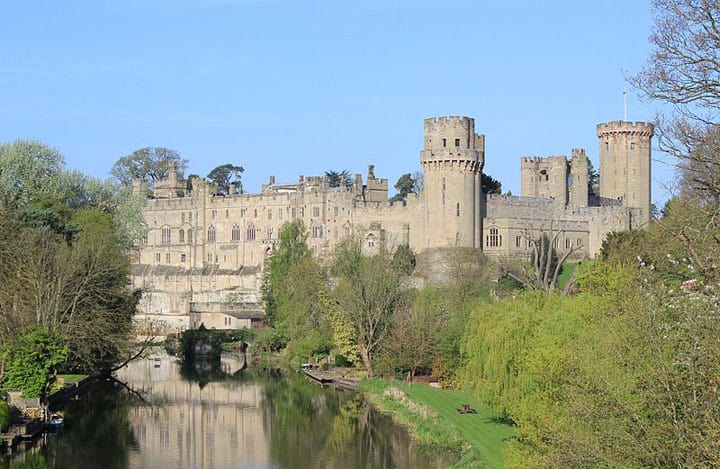 Warwick Castle is a medieval castle developed from an original built by William the Conqueror in 1068. Warwick is the county town of Warwickshire, England, situated on a bend of the River Avon. The original wooden motte-and-bailey castle was rebuilt in stone in the 12th century. During the Hundred Years War, the facade opposite the town was refortified, resulting in one of the most recognisable examples of 14th century military architecture. It was used as a stronghold until the early 17th century, when it was granted to Sir Fulke Greville by James I in 1604. Sir Fulke Greville converted it to a country house. It was owned by the Greville family, who became earls of Warwick in 1759, until 1978 when it was bought by the Tussauds Group. [Wikipedia] 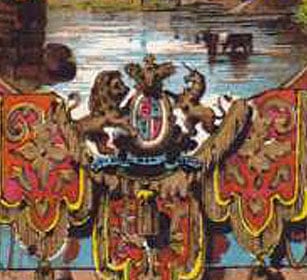 Next we need to look at the coat of arms on the label. Hopefully this will confirm that we are looking in the right place. Close inspection yields a Lion and Unicorn. Dating from 1603, the Lion and the Unicorn are symbols of the United Kingdom. The lion symbolises England and the unicorn represents Scotland. The combination dates back to the 1603 accession of James VI of Scotland to the English throne whereupon he was crowned James I. The symbol came to represent the power and authority of the British Crown both at Home and around the world. 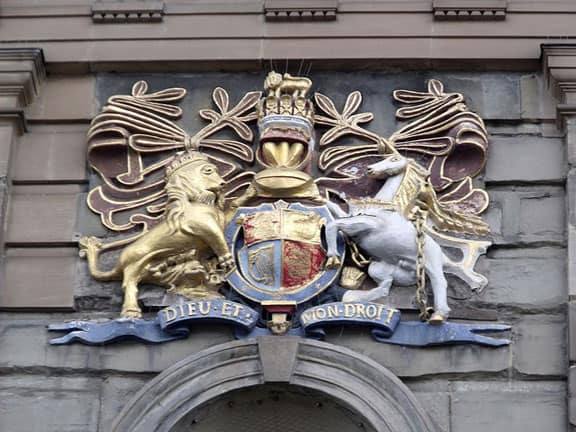 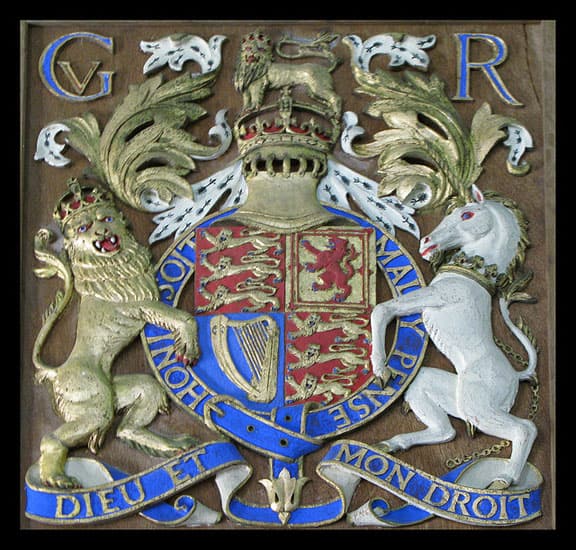 At the base of the coat of arms is the phrase Dieu et mon droit. You can not read it on the label, at least with the digital file I have, but I suspect it is there.

Dieu et mon droit is the motto of the British Monarch in England. It appears on a scroll beneath the shield of the coat of arms of the United Kingdom. The motto refers to the divine right of the Monarch to govern and is said to have first been used by King Richard the Lionheart as a battle cry and official motto of battle, then adopted as the royal motto of England by King Henry V in the 15th century.

So where are we? We have an unlisted bitters that will need to be catalogued. Probably an import from England or less likely Scotland. On the other hand, maybe it was made and bottled in New York or was just a ‘proof’ for a product that never was made. I guess we will just wait and see until more information is uncovered. This is only the first step.

Ferdinand Meyer V is a native of Baltimore, Maryland and has a BFA in Fine Art and Graphic Design from the Kansas City Art Institute and School of Design. Ferdinand is the founding Principal of FMG Design, a nationally recognized design consultation firm. Ferdinand is a passionate collector of American historical glass specializing in bitters bottles, color runs and related classic figural bottles. He is married to Elizabeth Jane Meyer and lives in Houston, Texas with their daughter and three wonderful grandchildren. The Meyers are also very involved in Quarter Horses, antiques and early United States postage stamps. Ferdinand is the past 6-year President of the Federation of Historical Bottle Collectors and is one of the founding members of the FOHBC Virtual Museum.
View all posts by Ferdinand Meyer V →
This entry was posted in Art & Architecture, Bitters, History, Questions, Tonics and tagged castle, England, Gourd, J. E. Wylie, Knapp, lion, Major, New York, Sarony, Scotland, unicorn, United Kingdom, Warwick. Bookmark the permalink.