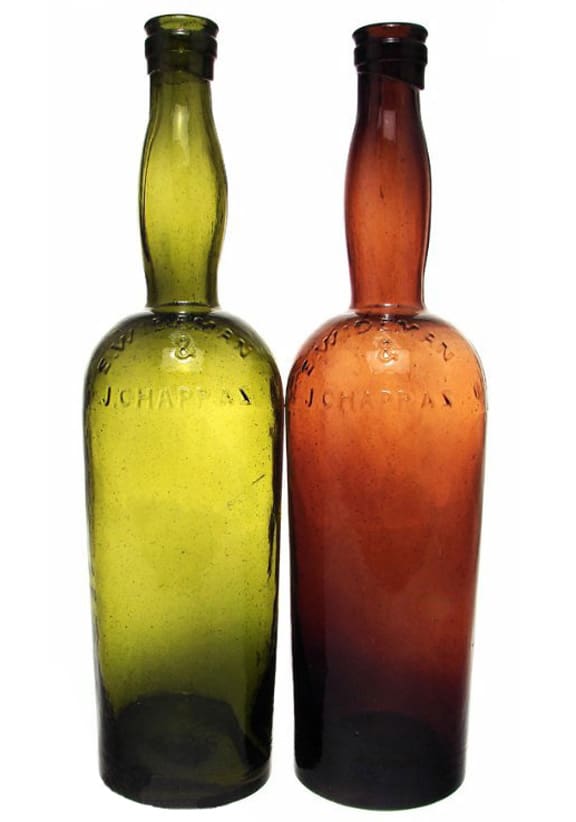 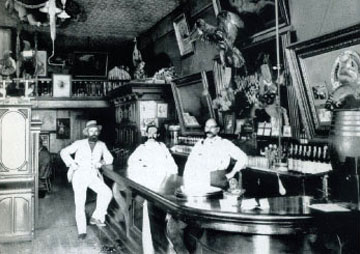 This 1856 photograph shows the interior of the Golden Eagle Hotel and Bar with its beautiful birds and wood-accented décor. – Marysville. Ca. The exterior of the hotel is pictured at the bottom of this post.

One can only imagine this dandy gentleman being served a bottle of Alpine Stomach Bitters at the Golden Eagle Hotel and Bar (pictured above) in 1856. Who knows, maybe this is Widemann and Chappas posing behind the bar? Probably not, as Widemann had his establishment at the Wisconsin House as you will see.

Again I made a trip to the car only to find the fifth and sixth one sitting there next to the hole when I came back. Time to take another trip to the car!

from A Quick Exit for Two Lucky Diggers

Over a year ago we looked at a post on the Alpine Herb Bitters by Thomas Taylor Company from San Francisco in 1888 and followed up recently with the Alpine Bitters put out by Kornemann & Co. in New York in 1869. An then we followed with a unlisted Alpine Stomach Bitters by Gehrmann, Ahrens Co. in Manhattan.

We now will re-look at the Alpine Stomach Bitters by Widemann & Chappas from Marysville, California. 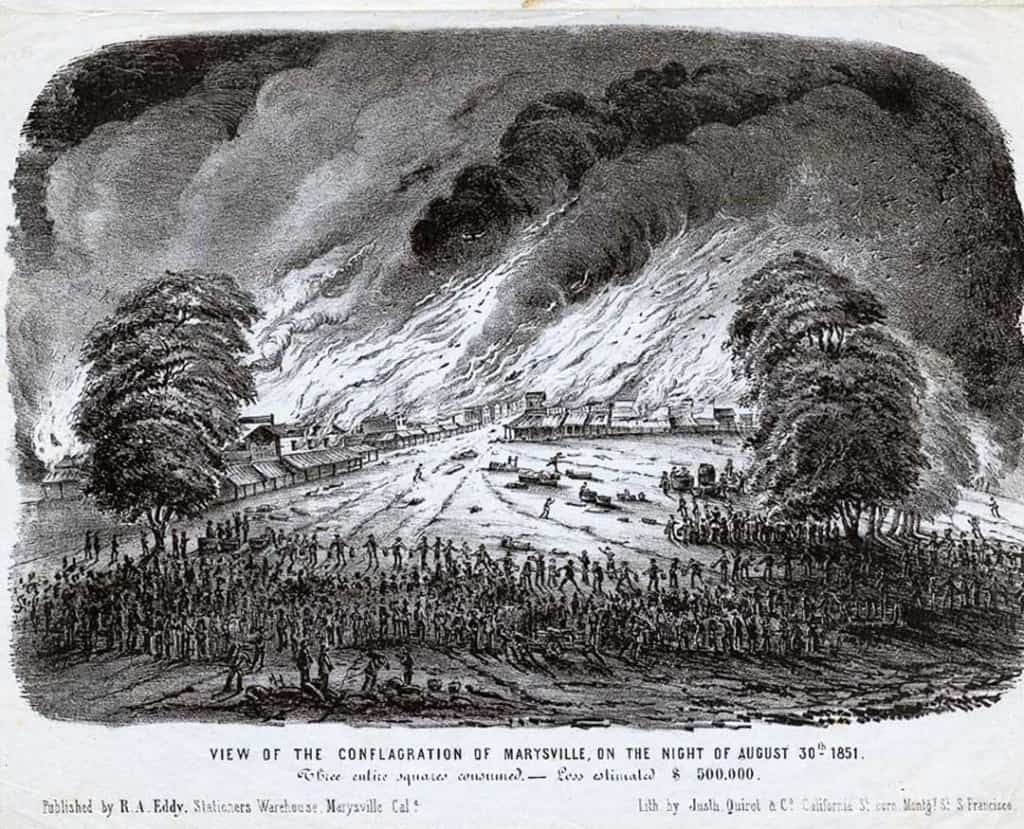 Marysville Town Fire, 1851. This lithograph shows the bucket brigade that assisted in quelling the worst fire ever to hit Marysville. The entire city nearly burned to the ground, and the cost of damages was over one-half million dollars.

Reading up on Marysville is interesting, especially when you find that the city nearly burned to the ground in 1851. They must have reconstructed rather quickly because the Alpine Stomach Bitters was being marketed by E. Widemann and J. Chappas in 1864. Widemann even had a listing for his liquor store in a Marysville directory in 1855, just four years after the fire!

Looking in the Carlyn Ring and Bill Ham Bitters Bottles Supplement there is a listing for:

A 35.5  L…Alpine Celebrated Stomach Bitters
// s // E. WIDEMANN ( au ) / & / J. CHAPPAS
11 5/8 x 2 3/4 (5 7/8)
Round-lady’s leg, ARM, Applied mouth,
Puce, Very rare, Green, Extremely rare
Spelling on advertisement is WIDEMANN. On bottle the embossing is WIDEMAN which is slightly off center with a blank space where a second N could have been embossed.
Assumed identity, no labeled bottle known.
Widemann & Chappas was located at the Wisconsin House Corner B and Third St., Marysville, Calif. from approximaely 1864 to 1868.
Most known examples were dug in Marysville, Ca.

It was one of those rare situations back in the 1970s, for us, that day luck was on our side. After walking behind some apartments, probing three holes, we needed permission to dig them. Elmer and I knocked on one of the rear doors and asked permission to dig. The occupant didn’t speak English but said yes anyway. It was obvious this was not the owner so we knew we could get kicked out at anytime. Even though we had “permission” we decided to park down the alley just in case there were any problems. We picked what we thought was the best hole to dig first and starting digging at a pretty fast rate. Elmer was the strongest so he did most of the digging.

As he got close to the bottom out came the first bottle of the hole, an eye opening apricot puce E. Wideman / J. Chappaz! Before I started to take it to the car out came a second. I went to put then in the car and when I came back, there was third one lying there next to the hole and soon a fourth one was pulled out. Again I made a trip to the car only to find the fifth and sixth one sitting there next to the hole when I came back. Time to take another trip to the car! 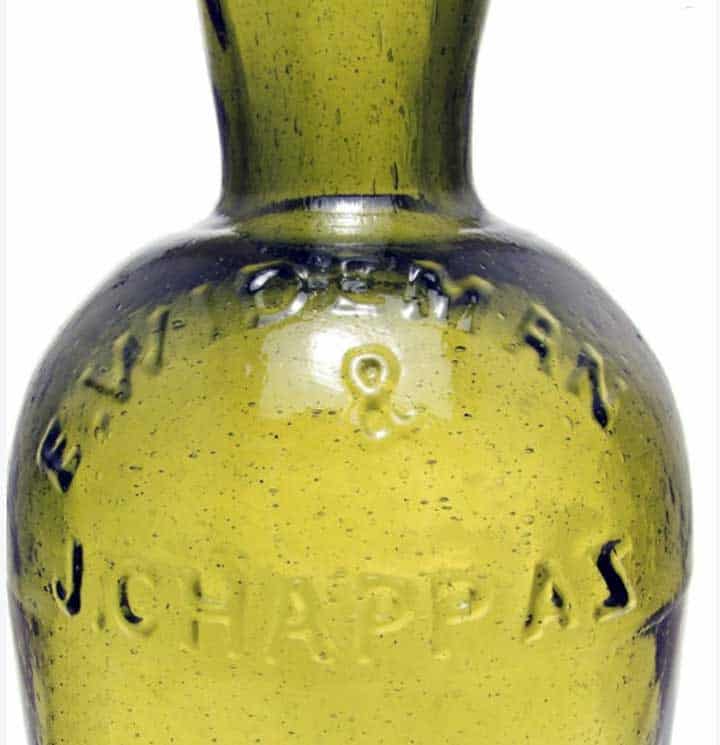 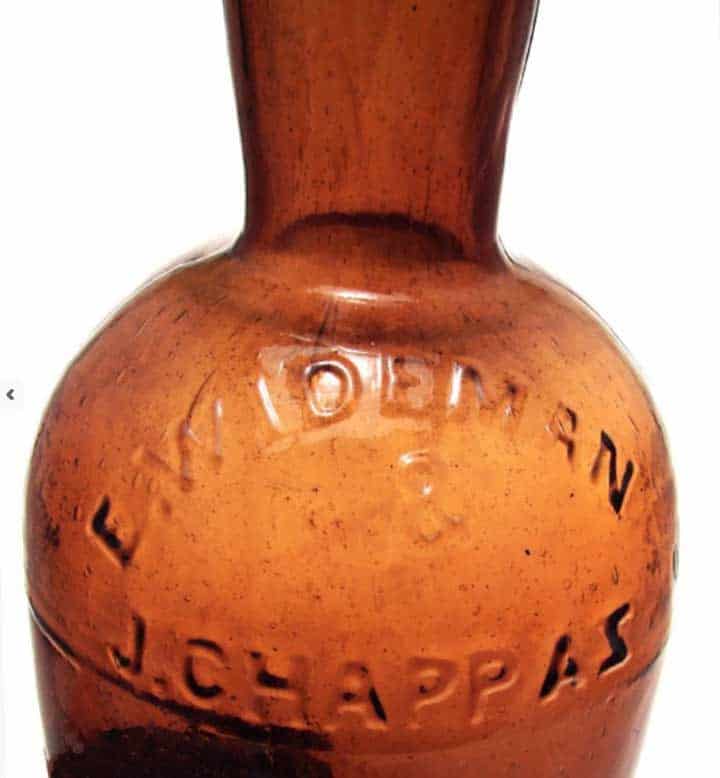 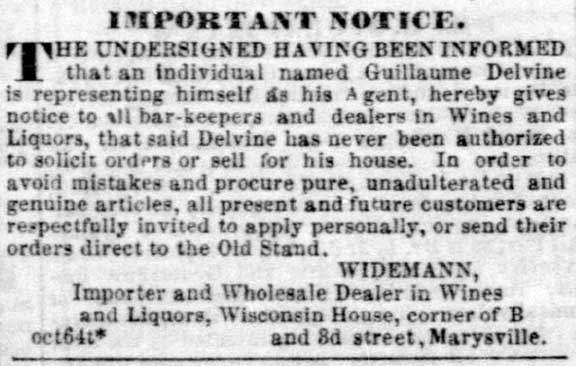 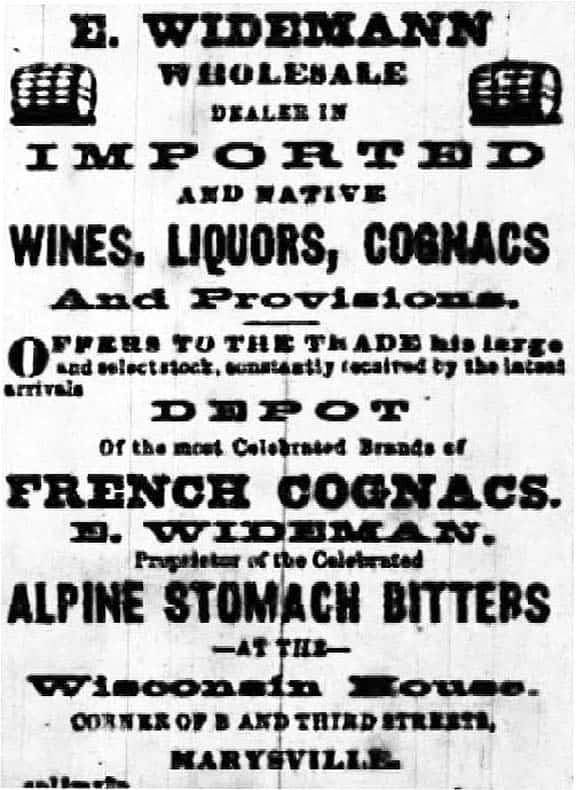 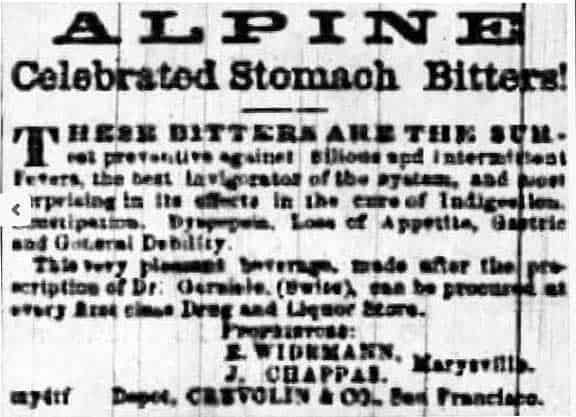 Wideman & Chappas Alpine Bitters listing – Report of the Fourth Industrial Exhibition of the Mechanics’ Institute of the City of San Francisco – 1864 *Pictures exist of the Fourteenth Exhibition in 1879 but would not show this product.

Case Bitters, Widemann & Chappas and One hundred and forty-five cases Salutarus Bitters, Byrnes & Castree in Case 3 at the Fourth Industrial Exhibition of the Mechanics’ Institute of the City of San Francisco – Daily Alta California, 8 September 1864 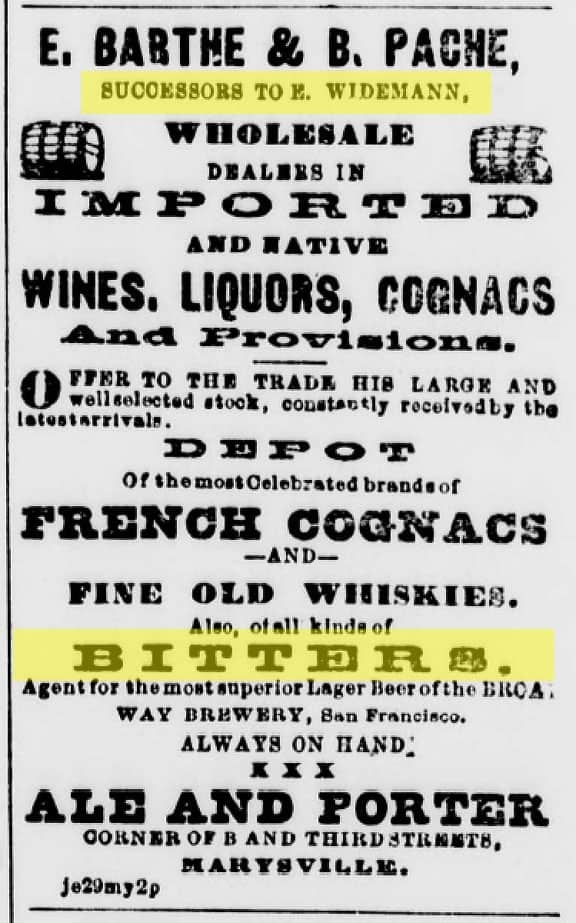 Advertisement: Widemann, Importer and Wholesale Dealer in Wines, Liquors, Wisconsin House, Corner of B and 8d street, Marysville *Widemann not listed in 1853 Directory.

Advertisement: E. Widemann, Wholesale Dealer in Native Wines, Liquors, Cognacs and Provisions. Proprietor of the Celebrated Alpine Stomach Bitters, at the Wisconsin House, Corner of B and Third Street, Maryscille (Probsably 1863 as Chappas not listed) *see advertisement above.

Listing: Wideman & Chappas Alpine Bitters listing – Report of the Fourth Industrial Exhibition of the Mechanics’ Institute of the City of San Francisco – 1864

Note: What is interesting, is that there are no strong listings for E. Widemann or J. Chappas in ancestry wen sites or forums, nor are there any other references or pictures of the Wisconsin House. It is only assumed that the bottles pictured were labeled and contained the Celebrated Alpine Stomach Bitters. 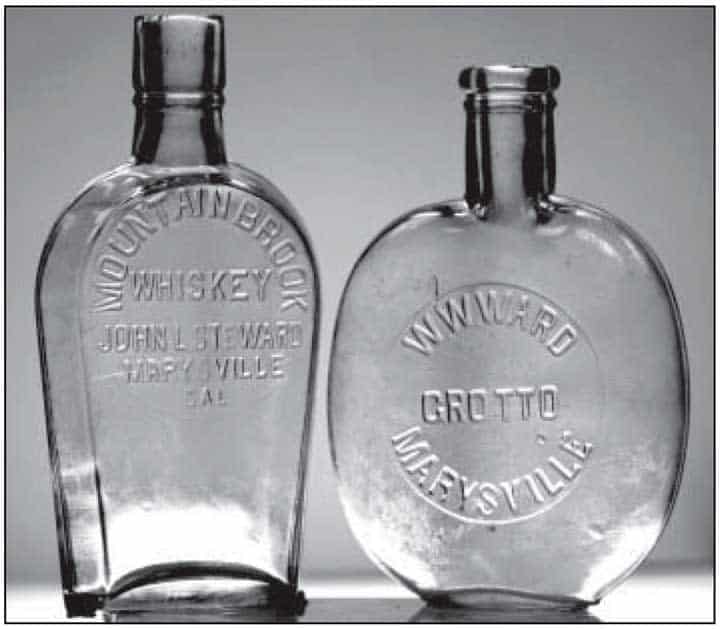 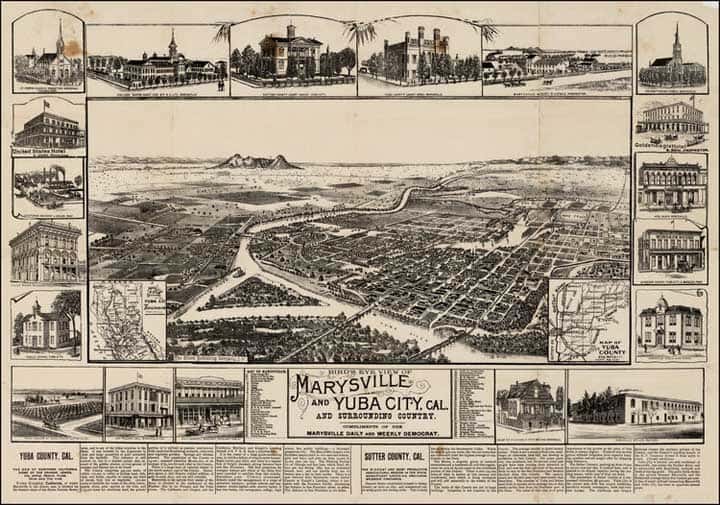 In 1842, John Sutter leased part of his Rancho New Helvetia land to Theodore Cordua, a native of Mecklenburg in Germany, who raised livestock and, in 1843, built a home and trading post he called New Mecklenburg.[2] The trading post and home was situated at what would later become the southern end of ‘D’ Street, Marysville’s main street. In 1844, the Mexican government granted Cordua his own land grant, Rancho Honcut.
In 1848, a former employee of Cordua, Charles Covillaud, discovered riches in the gold fields and bought half of the Cordua ranch. Then, in January 1849, Michael C. Nye and William Foster Nye, brothers-in-law to Covillaud’s wife, Mary Murphy, bought the other half of the Cordua ranch. They later sold their interest to Covillaud. In October of the same year, Covillaud sold most of the ranch to Jose Ramirez, John Sampson, and Theodore Sicard. In the days of the Gold Rush, the ranch was a stopping point for riverboats from Sacramento and San Francisco that carried miners on their way to the digging grounds. A sign on the roadside as one enters Marysville carries the slogan: “Gateway to The Gold Fields.” Read More on Wikipedia

Read: THE TOWN OF MARYSVILLE from the Marysville Herald, August 1850

The town of Marysville is geographically speaking, in a position to become one of the most important in the Eureka State. It already numbers three thousand
inhabitants, celebrated for their industry, commercial enterprise, and public spirit.

A small brewery was built in Marysville by John Rueger, in 1852, corner of First and C streets. Its successor is the present California Brewery, owned by Gotlieb Sieber. There are six men employed here and the annual manufacture is over thirty-five thousand gallons. In the great flood of 1875 the brewery sustained a loss of about six thousand dollars, and in April, of the same year, it was destroyed by fire. A new frame building has since been erected. – Yuba County, California History

About 1856, an ale brewery was built on Feather river at the foot of Third street, by an Englishman, but it was not long operated, and was converted in 1859, into a beer brewery by a man named Meyer. This was in operation but a few years. – Yuba County, California History

Wine was made in Marysville, by J.M. Ramirez, as early as 1855, though none was made for the market prior to 1859, when Charles Covillaud, who had been making small quantities for several years, commenced its manufacture on a larger scale. A great deal of wine is now throughout the county, by a number of persons who have vineyards. The largest vineyard and winery near Marysville is that of Grass Bros. They commenced the manufacture as early as 1863, and now have twenty-five acres of vineyard. This, at an average of one thousand vines to the acre, makes a total of twenty-five thousand vines, which are of forty-three varieties. They have made as high as seventeen thousand gallons of seven varieties of wine in one year. Last year their manufacture was, however, but four thousand five hundred gallons. Some of the wine made here is shipped direct to the East, but the larger portion is sold in San Francisco. Two of the finest varieties of grapes, cultivated here, were imported from South America, by J. M. Ramirez; they are the Rose of Peru, and the Chile Rose. – Yuba County, California History

A soda water and sarsaparilla factory was started in 1865. It is located at No. 82, Second street, and two men are employed there; L. Belding is the proprietor. – Yuba County, California History

May 20, 1872, the Johnston Wine and Brandy Manufacturing Co. was formed for the manufacture of those liquors by the Johnston process. The capital stock was $100,000, divided into one thousand shares. Of this, about $27,000 were
subscribed. That year a large quantity of both wine and brandy was made, but on account of the low price, the company became involved in debt, and was finally compelled to discontinue their business. – Yuba County, California History 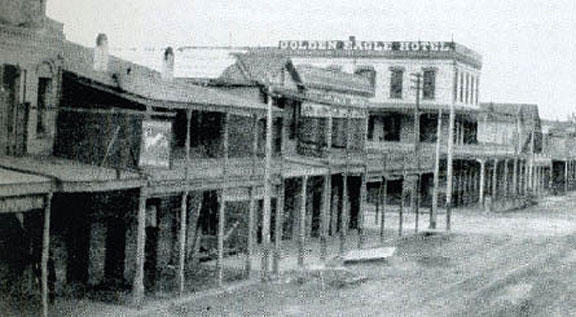 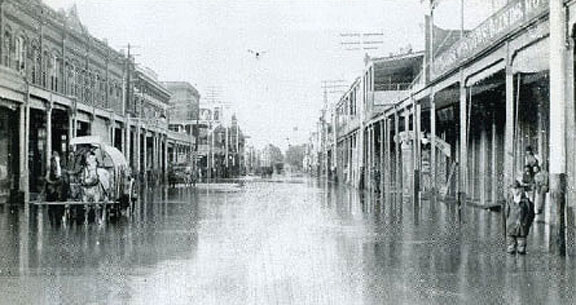 Marysville D. Street. Although the exact date is uncertain, records indicate that sometime in the 1850s, Marysville received over 1.75 inches of rain in less than 15 minutes. – Historic Downtown Marysville 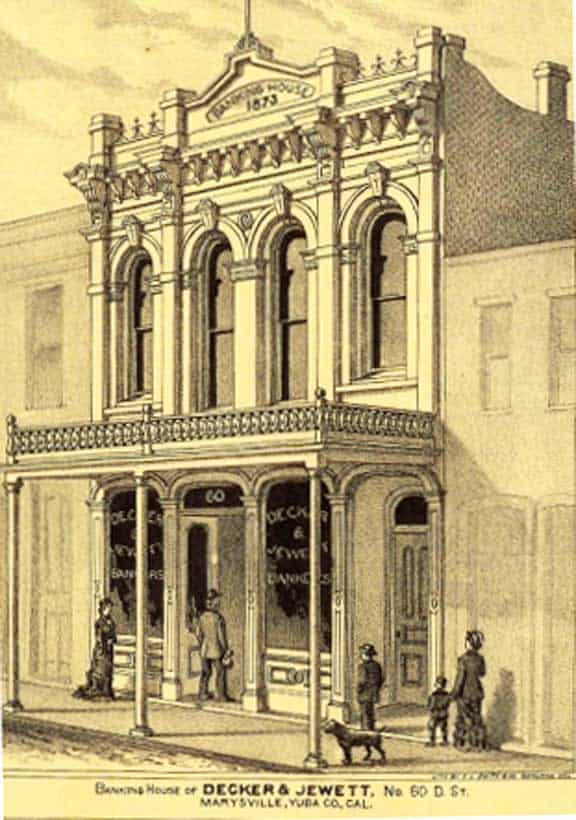 Ferdinand Meyer V is a native of Baltimore, Maryland and has a BFA in Fine Art and Graphic Design from the Kansas City Art Institute and School of Design. Ferdinand is the founding Principal of FMG Design, a nationally recognized design consultation firm. Ferdinand is a passionate collector of American historical glass specializing in bitters bottles, color runs and related classic figural bottles. He is married to Elizabeth Jane Meyer and lives in Houston, Texas with their daughter and three wonderful grandchildren. The Meyers are also very involved in Quarter Horses, antiques and early United States postage stamps. Ferdinand is the past 6-year President of the Federation of Historical Bottle Collectors and is one of the founding members of the FOHBC Virtual Museum.
View all posts by Ferdinand Meyer V →
This entry was posted in Bitters, Digging and Finding, History, Liquor Merchant and tagged Alpine, bitters, california, Chappas, Marty Lucich, Marysville, Stomach, Widemann, Wisconsin. Bookmark the permalink.