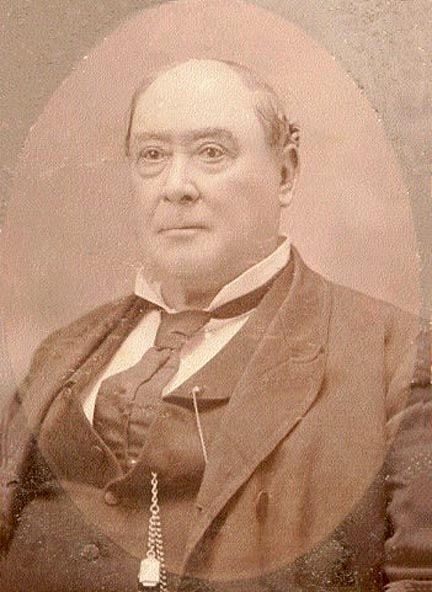 prepared by Dr. G. A. Foote

Mr. H. C. HERNDON, of the firm of FOOTE & HERNDON, druggists of this place, has presented us with a bottle of Texas Tonic Bitters

With continued research by James Viguerie on Price’s Patent Texas Tonic we now have another reference to a different Texas Tonic Bitters by Dr. G. A. Foote. It is quite odd that in various historical documents that G.A. is referred to as George, Gerald or Gerard. I believe ‘Gerard’ is correct. James has also come across material for a Prindle’s Texas Tonic Bitters. We will look at that later.

Here is another Texas Tonic Bitters. I am not sure of its connection to the others.

Mr. H. C. HERNDON, of the firm of FOOTE & HERNDON, druggists of this place, has presented us with a bottle of Texas Tonic Bitters, prepared by Dr. G. A. FOOTE. It is claimed for these bitters that they are entirely vegetable, and quite useful in the cure of the various diseases peculiar to a southern climate, such as fever and ague, billious or remittent fevers, dyspepsia, also that they are a positive preventive of all malarial diseases. For sale at FOOTE & HERNDON’S.

Attached is a receipt from Foote and Herndon. – James 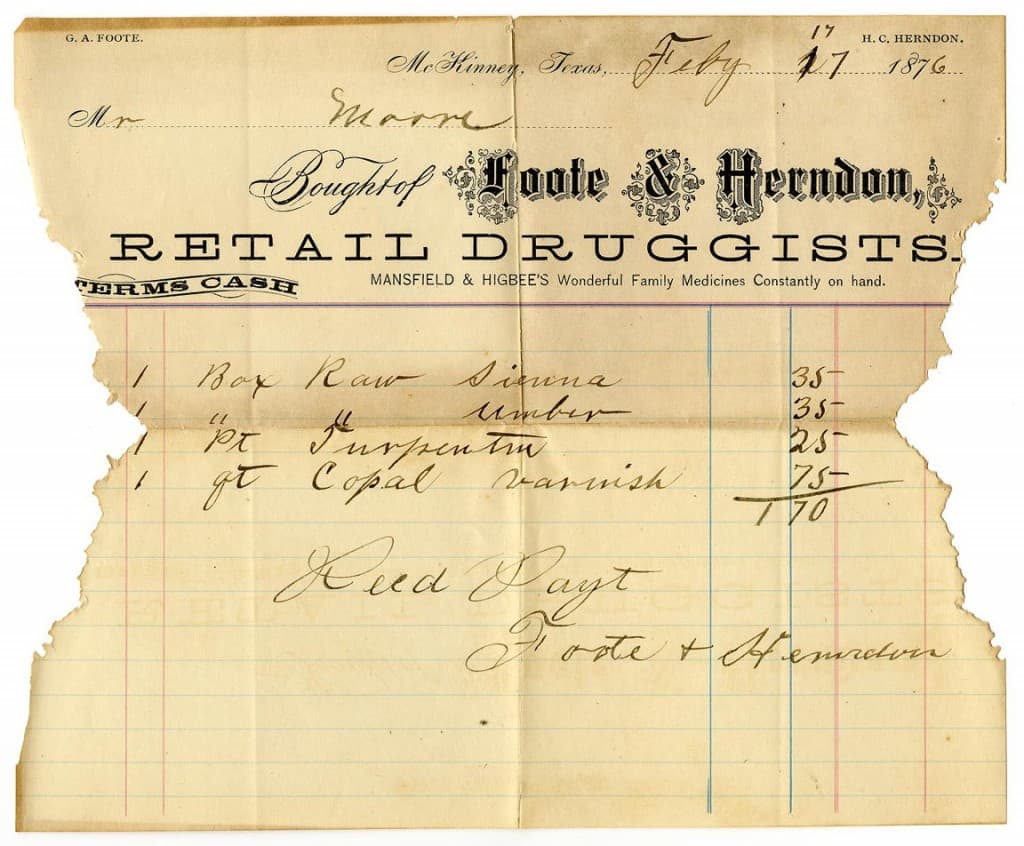 Receipt for Charles B. Moore from Foote and Herndon Retail Druggists, February 17, 1876 – University of North Texas Libraries, The Portal to Texas History 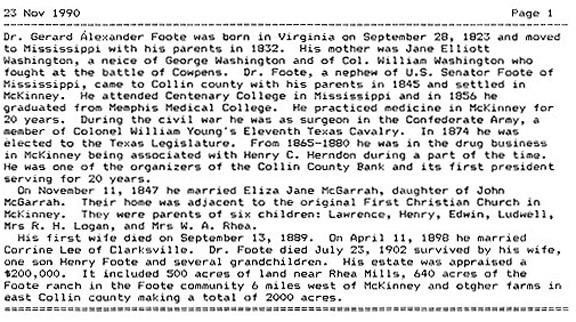 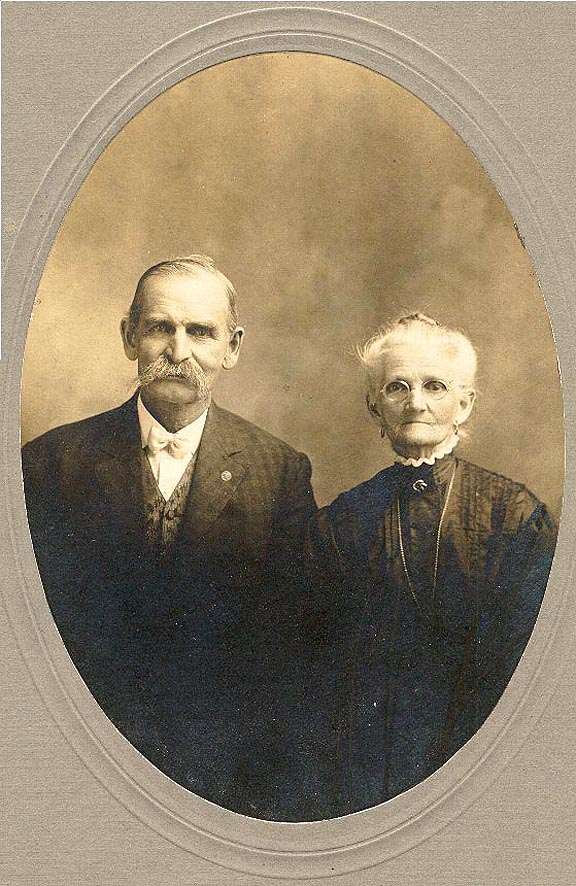 He Was a Pioneer Texan and a Surgeon in Confederate Army.

Dr. Gerald (should be George or Gerard) Alexander Foote died at his home in this city at 9:30 tonight. The deceased was born on Sept 28, 1823, in Farqua County, Virginia. He emigrated to Mississippi in 1832, thense to Collin County in 1845. He practiced medicine in McKinney and surrounding country for over twenty years. During the Civil War he was surgeon in the Confederate Army in Col. William Young’s Eleventh Texas cavalry.

At the close of the war he entered the drug business in McKinney and has been in active business ever since, for many years president of the Collin County National Bank until January last. He was a nephew of Senator H.S. Foote of Mississippi. Nov 11, 1847, he married Miss Eliza Jones McGarrah at Old Fort Buckner, in this county. He was married a second time to Miss Corrine Lee of Clarksville, TX, who survives him. He was elected to the Texas Legislature in 1865 and again in 1874. – The Dallas Morning News – 1902-07-17 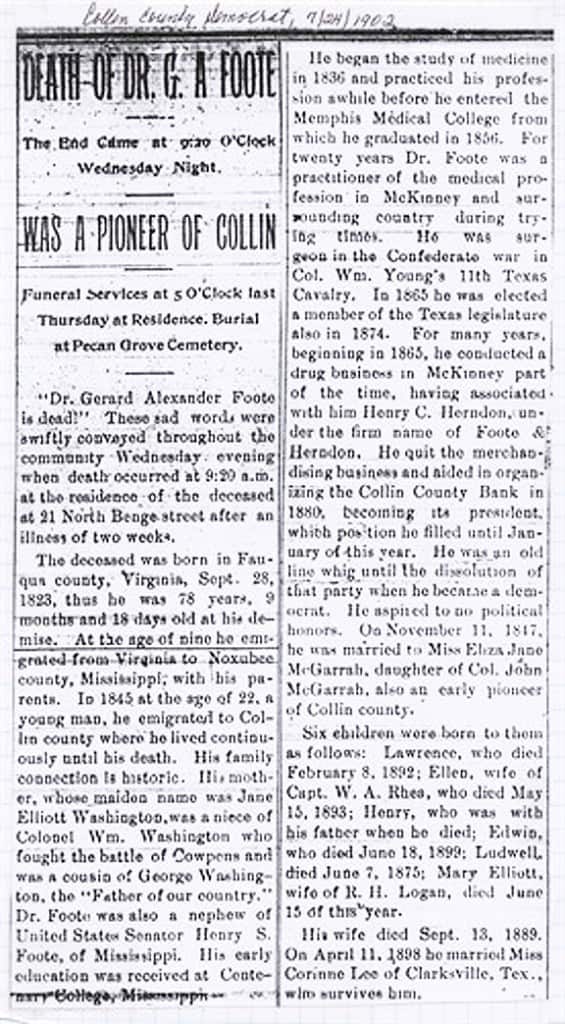 The Good Shepherd Montessori School has a rich history from the ground up. The school rests on 4 acres in McKinney, Texas, 1.7 acres of which originally belonged to G.A. Foote. Dr. Foote, in a handwritten deed from 1907, generously sold the land for $1.00 to the small community’s church. Included was a written provision for a portion of the land to be used as a school. This gesture showed a vision of the future for McKinney based on Christian principles with a high value placed on education. 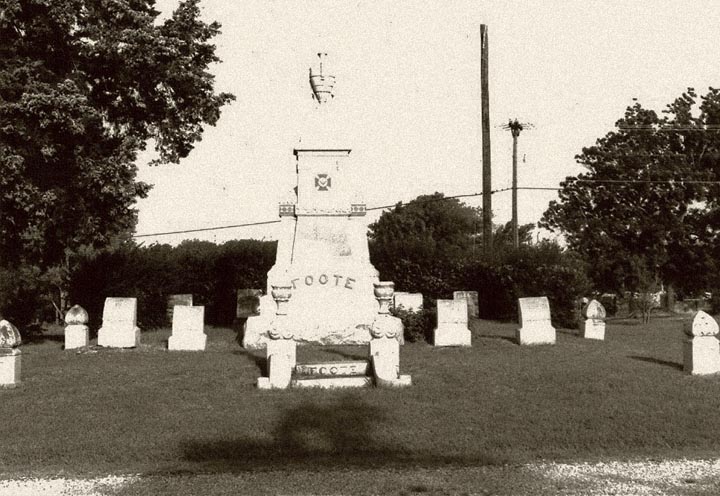 Ferdinand Meyer V is a native of Baltimore, Maryland and has a BFA in Fine Art and Graphic Design from the Kansas City Art Institute and School of Design. Ferdinand is the founding Principal of FMG Design, a nationally recognized design consultation firm. Ferdinand is a passionate collector of American historical glass specializing in bitters bottles, color runs and related classic figural bottles. He is married to Elizabeth Jane Meyer and lives in Houston, Texas with their daughter and three wonderful grandchildren. The Meyers are also very involved in Quarter Horses, antiques and early United States postage stamps. Ferdinand is the past 6-year President of the Federation of Historical Bottle Collectors and is one of the founding members of the FOHBC Virtual Museum.
View all posts by Ferdinand Meyer V →
This entry was posted in Bitters, Civil War, Druggist & Drugstore, History and tagged Annie Simmons, Collin County, Dr. G. A. Foote, Dr. Gerard Alexander Foote, Druggist & Drugstore, Elizabeth Jane McGarrah, Foote & Herndon, H. C. Herndon, James Viguerie, McKinney, texas. Bookmark the permalink.