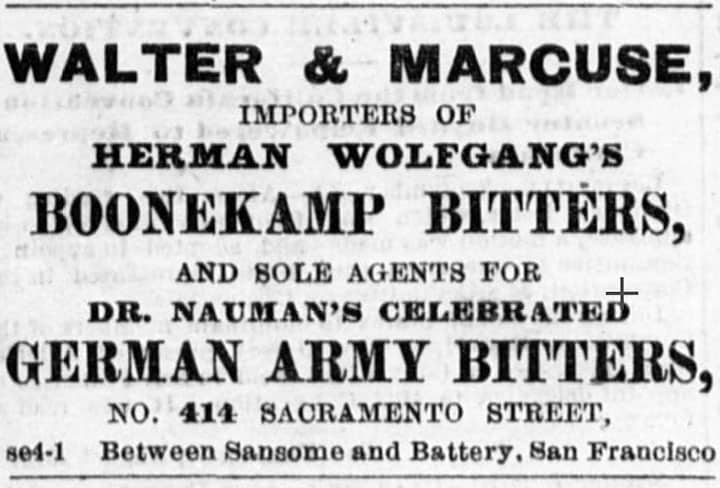 If you read below, I’m going to repeat a phrase I used yesterday to describe the situation when I came across two unlisted bitters with the same name on the same day. There is not much information on this brand with the exception of a few advertisements and San Francisco directory listings. I would like to thank Bill Ham and Brian Wolff for research assistance.

It is not often nowadays to come across an unlisted bitters. It does happen and it is somewhat akin, I suppose, to finding a new species in the deep Amazon jungle or an unknown blind fish in the Mariana Trench. Well, you can imagine my surprise when I got an email from Gary Beatty about his new find, that being a German Army Bitters from Ironton, Ohio. While researching this brand I also came across another unlisted Dr. Nauman’s Celebrated German Army Bitters from San Francisco, California. Huh. Does lightning strike twice in the same place?

They were used in the Sanitary Department of the German army in the late war, and highly recommended as a tonic and also for their anti-dyspeptic qualities.

I am also hoping that Warren Friedrich can chime in on this brand. Obviously this is a German product made for the American western market. Where was the concoction made and bottled? Note that Walter (in various advertisements and listings) is noted as a Sole Agent, Importer, Distiller of Bitters and Wholesale Liquor Dealer for the Pacific Coast.

Where was the concoction made and bottled? Note that Walter (in various advertisements and listings) is noted as a Sole Agent, Importer, Distiller of Bitters and Wholesale Liquor Dealer for the Pacific Coast.

Bill Ham has provided the following number and listing for the Dr. Nauman’s advertisement find. The material will be added to the forthcoming Bitters Bottles Supplement 2. 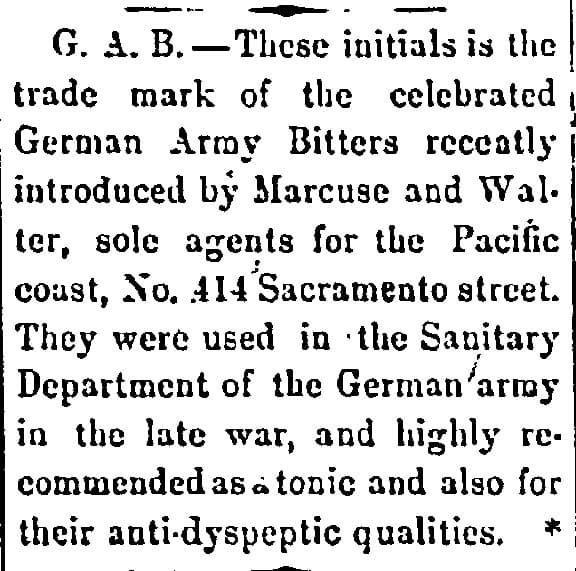 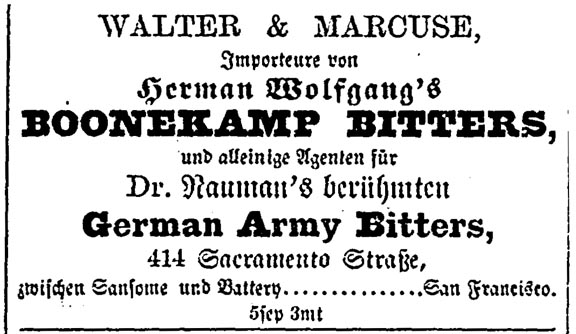 Ferdinand Meyer V is a native of Baltimore, Maryland and has a BFA in Fine Art and Graphic Design from the Kansas City Art Institute and School of Design. Ferdinand is the founding Principal of FMG Design, a nationally recognized design consultation firm. Ferdinand is a passionate collector of American historical glass specializing in bitters bottles, color runs and related classic figural bottles. He is married to Elizabeth Jane Meyer and lives in Houston, Texas with their daughter and three wonderful grandchildren. The Meyers are also very involved in Quarter Horses, antiques and early United States postage stamps. Ferdinand is the past 6-year President of the Federation of Historical Bottle Collectors and is one of the founding members of the FOHBC Virtual Museum.
View all posts by Ferdinand Meyer V →
This entry was posted in Bitters, Digging and Finding, History, Liquor Merchant, Medicines & Cures, Tonics and tagged army, Bill Ham, Boonekamp, Brian Wolff, Dr. Nauman, G.A.B., German, German Army Bitters, Herman Wolfgang, San Francisco, Walter & Marcuse. Bookmark the permalink.