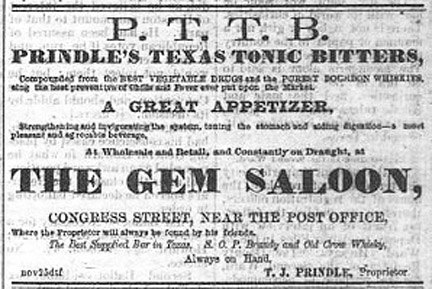 Constantly on Draught at The Gem Saloon

I want to be a Texan,
And with the Texans stand,
A spur upon our boot heel –
Prindle’s Bitters in our hand!

The Prindle’s is the second Texas Tonic Bitters that James Viguerie has uncovered recently while looking for information on Price’s Patent Texas Tonic. The first was the Texas Tonic Bitters, prepared by Dr. G. A. Foote. It looks like T. J. Prindle brought some experience with him from Kentucky and had saloons in Houston and Fort Worth. He had a partner named Oscar F. Holmes. Here is James incoming e-mail:

Here is information about another Texas Tonic I came across. This one was called Prindle’s Texas Tonic Bitters. I have no idea if it was related to the earlier Texas Tonic. Hopefully they had this one bottled. It does say for sale wholesale and retail as well as being constantly on draught at the Gem Saloon. It looks like T. J. Prindle was in business with Oscar F. Holmes in Houston.

Some interesting background on Holmes and Prindle.

Aunt Mollie (your grandmother) when asked what her husband did for a living would smile and say he was a ‘speculator’. He was all of that because he and Tom Prindle speculated her father Hiram right out of a good deal of money to put in saloons and gambling houses here in Houston, Someone recently told me the story of Aunt Mollie sending one of her visitng nieces down to the saloon each day at noon to get a pitcher of beer for the noonday meal. She must have been quite a character”

One of the Holmes children was name “Oscar Prindle HOLMES”

It looks like there is more online about both Holmes and Prindle.

The Gem Saloon, Congress Street, near the post office, Houston, Texas. Also had Saloon in Fort Worth, Texas. 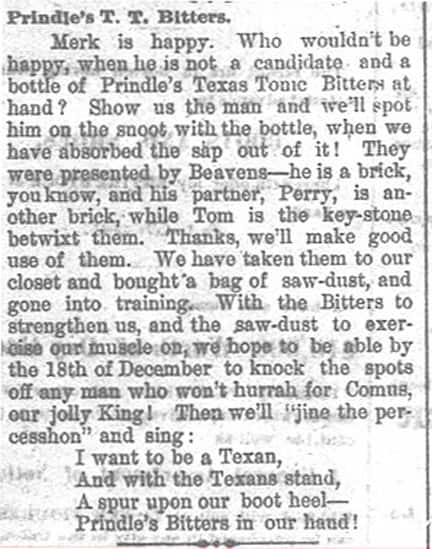 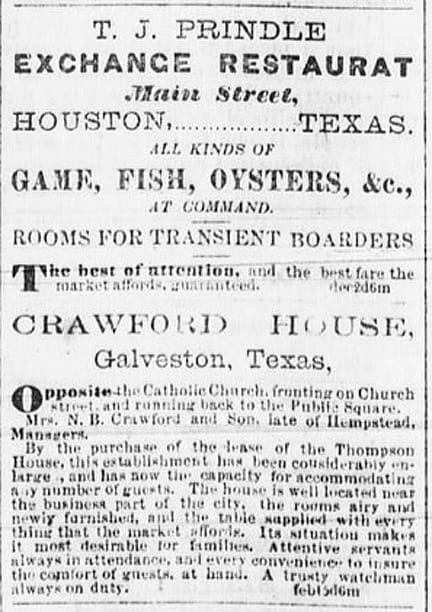 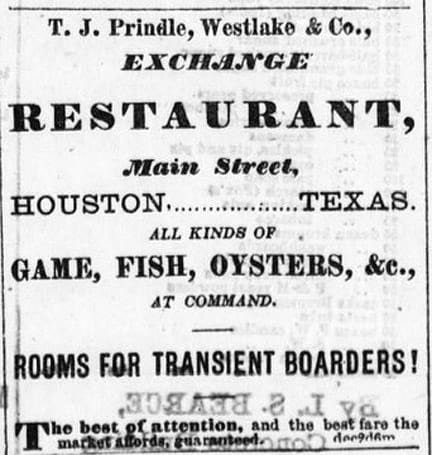 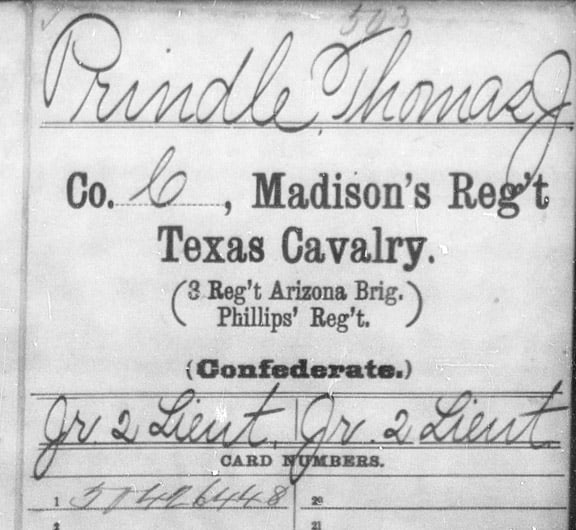 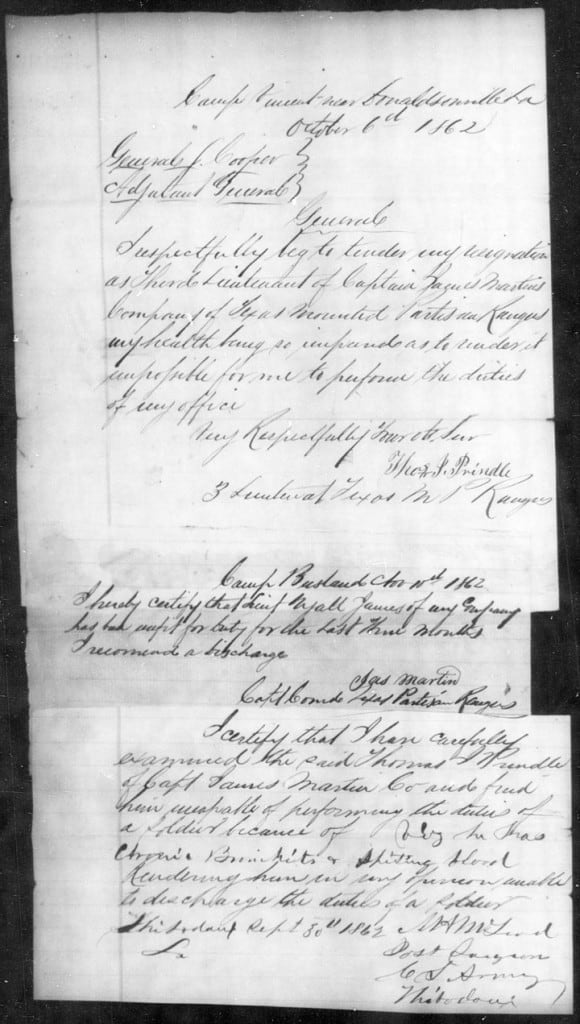 Military 25 October 1862 San Antonio, Bexar County, Texas. The records show that Oscar Holmes served as a private in Company E, (Captain Hall’s Company), Madison’s (also known as Phillips’) Regiment Texas Cavalry, Confederate States Army. He was enlisted October 25, 1862 at San Antonio, Texas and on the muster roll of the company dated December 31, 1862, the last roll on file. He was reported absent with leave from December 24, 1862. No later record of him has been found. His wife, Mary Emily Holmes, filed for a widow’s pension on November 18, 1914. Information from the Adjutant General’s Office of the War Department, May 28, 1914.

Census Residences: Hot Springs, Arkansas 1878. Shown as place of residence in his father’s will. 1880 Union, Garland County, Arkansas. District 72, Page 10. Surname is spelled “Holms” in this census. 1870 Schroeppel Township, Oswego County, New York. Shows to be living with his parents in this census, with occupation as
a cotton buyer. 1850 Danube, Herkimer County, New York

Fort Worth, Texas – During the 1860s Fort Worth suffered from the effects of the Civil War and Reconstruction. The population dropped as low as 175, and money, food, and supply shortages burdened the residents. Gradually, however, the town began to revive. By 1872 Jacob Samuels, William Jesse Boaz, and William Henry Davis had opened general stores. The next year Khleber M. Van Zandt established Tidball, Van Zandt, and Company, which became Fort Worth National Bank in 1884. Barrooms such as Tom Prindle’s Saloon and Steele’s Tavern welcomed many travelers. – Texas State Historical association.

NEARING MATURITY 1874-1890 89 – Houston gentlemen amused themselves that summer by playing billiards at the hall of Messrs. Prindle and Holmes, sculling on the bayou in the new paired-oar boat of the Andax Rowing Club, or drilling with the Light Guards. Women joined the Dramatic Club, read and discussed Mark Twain s new novel, The Gilded Age, and quoted couplets from the pen of Nettie Bowers Houston, Texas poet.

Ferdinand Meyer V is a native of Baltimore, Maryland and has a BFA in Fine Art and Graphic Design from the Kansas City Art Institute and School of Design. Ferdinand is the founding Principal of FMG Design, a nationally recognized design consultation firm. Ferdinand is a passionate collector of American historical glass specializing in bitters bottles, color runs and related classic figural bottles. He is married to Elizabeth Jane Meyer and lives in Houston, Texas with their daughter and three wonderful grandchildren. The Meyers are also very involved in Quarter Horses, antiques and early United States postage stamps. Ferdinand is the past 6-year President of the Federation of Historical Bottle Collectors and is one of the founding members of the FOHBC Virtual Museum.
View all posts by Ferdinand Meyer V →
This entry was posted in Bitters, Civil War, History, Medicines & Cures, Tonics and tagged Gem Saloon, Houston, James Viguerie, Oscar F. Holmes, P.T.T.B., Prindle's Texas Tonic Bitters, T. J. Prindle, texas, Thomas J. Prindle. Bookmark the permalink.