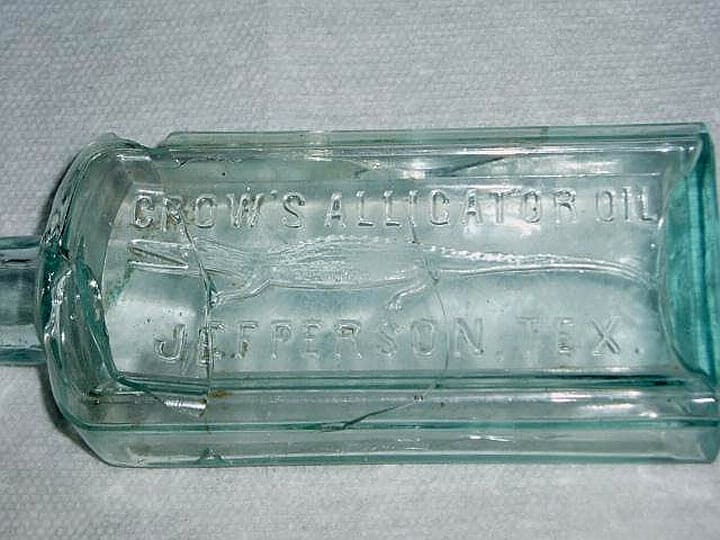 Although Attakapans were adept at use of the bow and arrow, they were unerringly proficient at hurling the fish spear, so much so that the warriors could stab small fish but ten inches long at a distance of twenty paces.”They used a shorter dart and torchlight to spear flounders at night, and a rake made from two poles to loosen oysters from the reefs. Still another Attakapan delicacy was alligator meat, which was procured by spearing the reptiles through the eyes. The carcasses were then cooked upon beds of charcoal and heated oyster shells, and incising entrenchments in the flesh around the backbone collected the alligator oil. The oil was used as fuel for lanps made from conch shells and dried moss. The Attakapans also used alligator oil on their bodies to repel mosquitoes, a practice which caused the tribesmen to emit a particularly offensive odor.

from Chapter 8 – A HISTORY OF JEFFERSON COUNTY (Texas) – The Aboriginal Inhabitants – by W. T. Block

Now here is a bottle that I didn’t know was out there. It was referenced once on Peachridge Glass but I had never seen a picture. Doyle Bailey, an old time Texas bottle collector sent me these pictures (above & below) and the advertisement for Crow’s Alligaror Oil from Jefferson, Texas. Reminds me of the River Swamp Chill and Fever Cure bottle from Augusta, Georgia. Read: River Swamp Chill & Fever Cure with embossed Alligator. Amazing that two sizes of this bottle are referenced in advertising yet only a few example of the size pictured above have been found.

“It was dug in Jefferson, Texas by an old digger, who has since passed away. Story was, he had dug 4 but 2 are gone forever, broken and discarded but he still has one and I have the other.”

“Four of these were dug by the same man in Jefferson, Texas, one was in very bad condition and pieces missing and the other was dropped and broke into a million pieces, he has the only good one, and I have the broken one that came out of the hole like this. So there are only 2 left, his and mine.”

“There is also a “Crow’s Alligator Oil Jefferson Texas” that has an alligator that is even more appealing to my eye. The story goes two were found one was broken, and the resides in a museum. It is for sell, but the price is just not in line with what must of us call reality!” 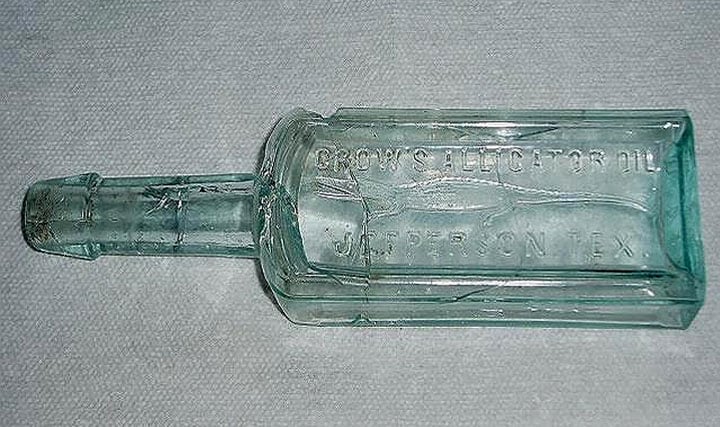 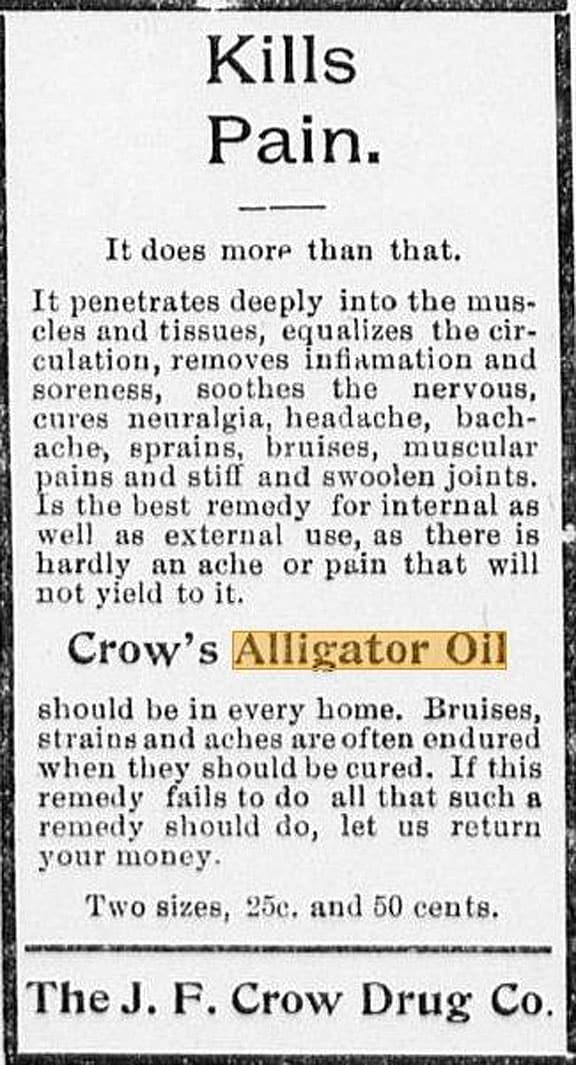 According to Wikipedia, Jefferson is a historic city in Marion County in northeastern Texas, Early records indicate that Jefferson was founded around 1841 on land ceded from the Caddo Indians. 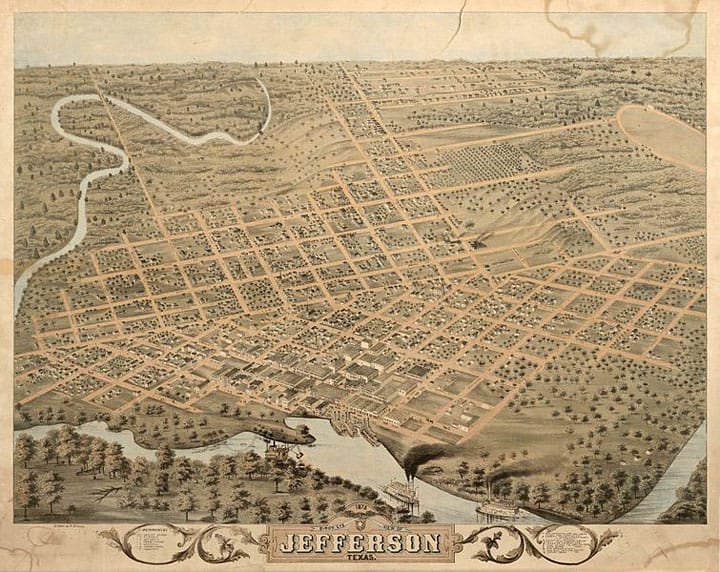 At that time, a log jam more than 100 miles long existed on the Red River north of present Natchitoches, Louisiana. The Indians said that this log jam, known as the Great Red River Raft, had always existed. The Red River Raft (or Great Raft) acted as a dam on the river and raised the level of Caddo Lake and the Red River several feet. This rise of Caddo Lake and the corresponding rise in the Big Cypress Bayou at Jefferson permitted commercial riverboat travel to Jefferson from ports such as St. Louis and New Orleans via the Mississippi and Red Rivers.

Jefferson was one of the most important ports in Texas between 1845 and 1872. The town reached its peak population just a few years after the Civil War and is reported to have exceeded 30,000. During this time, Jefferson was the sixth largest town in Texas.

There were attempts over the years to remove the raft and permit the normal flow of the Red River, but these attempts were unsuccessful until the discovery of nitroglycerin. In 1873, using nitroglycerin, the Army Corps of Engineers was finally able to clear the raft from the Red River. This lowered the level of Caddo Lake and Big Cypress to the extent that riverboat traffic to Jefferson was no longer commercially feasible.

At the peak of river traffic Jefferson had a population of over 7,000. A few years later, it had dropped to a little over 3,000.

One of the legends surrounding Jefferson involved Jay Gould, the railroad magnate. The legend goes that Gould wanted to bring his railroad through Jefferson but the town leaders refused because they had the river traffic. Gould responded by saying that grass would grow in the streets without the railroad. Gould is even given credit for supporting the removal of the Red River Raft and the subsequent decline of Jefferson as a river port. Much of this tale is fiction, but it makes a good tale. Townspeople even obtained Gould’s railcar and it is presently displayed as a tourist attraction in downtown Jefferson. 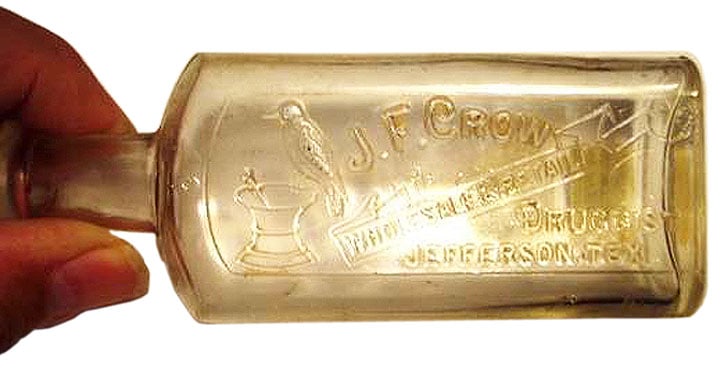 According to The Druggists’ Circular and Chemical Gazette in June 1897, “The J. F. Crow Drug Co., of Jefferson, Texas has been incorporated with the capital stock of $5,000. The incorporators are J. F. Crow, Allen Urquhart and B. F. Rogers. 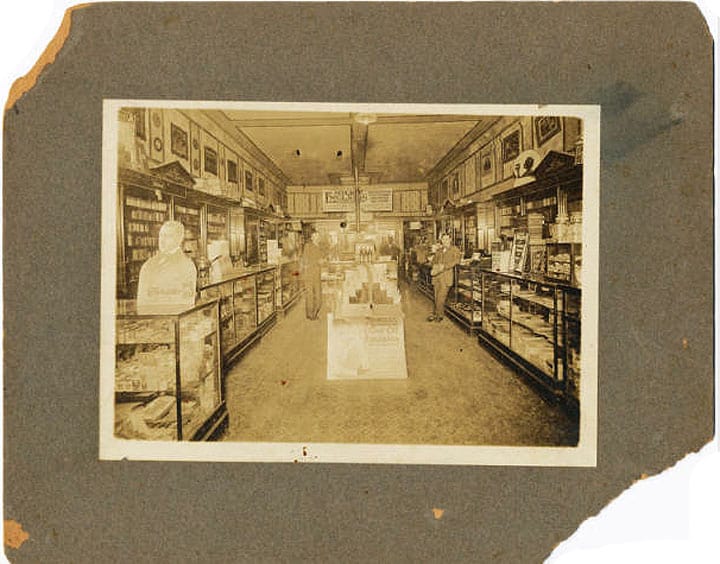 A photograph in 1919 of the interior of Crow Drug Store, which was located in downtown Jefferson, Texas. Owner J.T. Crow is pictured on the left. – Jefferson Carnegie Library 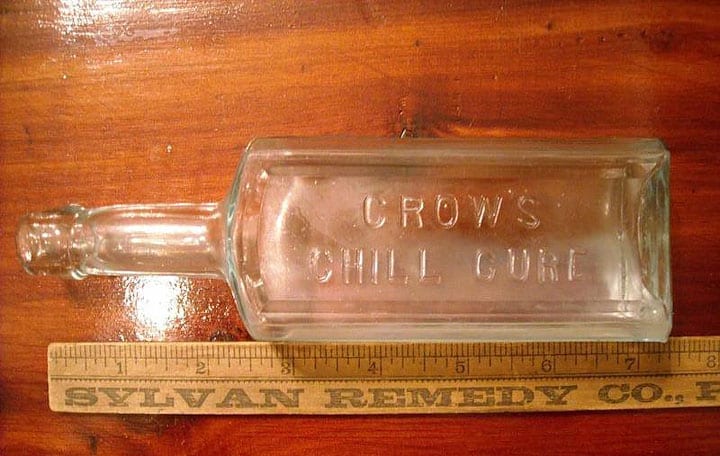 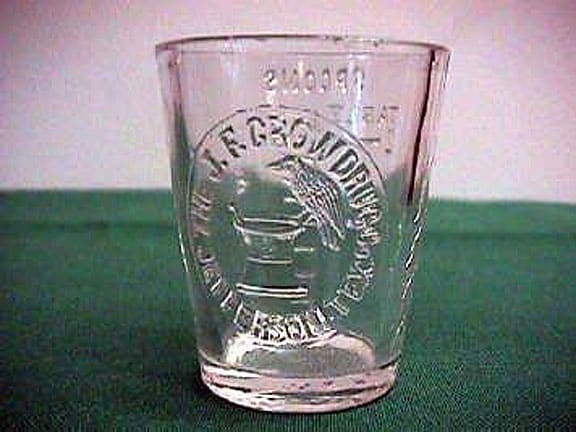 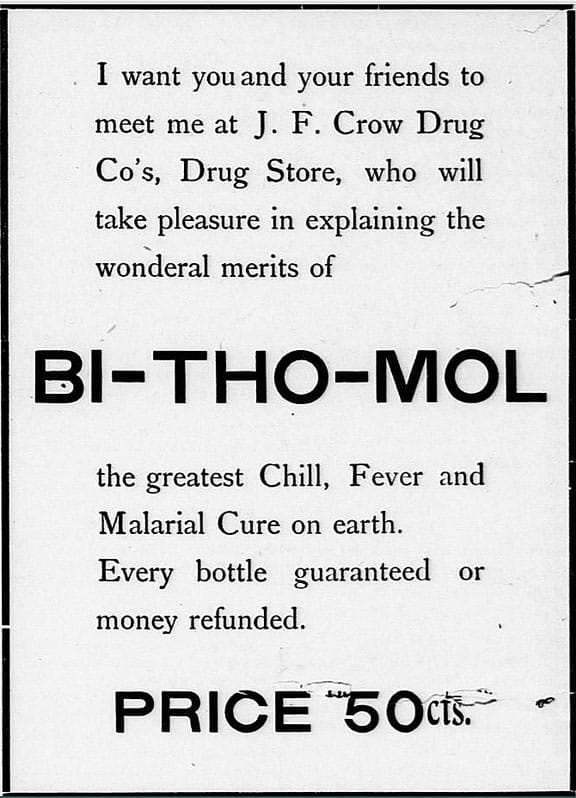 Ferdinand Meyer V is a native of Baltimore, Maryland and has a BFA in Fine Art and Graphic Design from the Kansas City Art Institute and School of Design. Ferdinand is the founding Principal of FMG Design, a nationally recognized design consultation firm. Ferdinand is a passionate collector of American historical glass specializing in bitters bottles, color runs and related classic figural bottles. He is married to Elizabeth Jane Meyer and lives in Houston, Texas with their daughter and three wonderful grandchildren. The Meyers are also very involved in Quarter Horses, antiques and early United States postage stamps. Ferdinand is the past 6-year President of the Federation of Historical Bottle Collectors and is one of the founding members of the FOHBC Virtual Museum.
View all posts by Ferdinand Meyer V →
This entry was posted in Digging and Finding, Druggist & Drugstore, History, Medicines & Cures and tagged Attakapans, Brad Seigler, Caddo Lake, Crow's Alligator Oil, J. F. Crow Drug Company, Jay Gould, jefferson, Red River, texas. Bookmark the permalink.