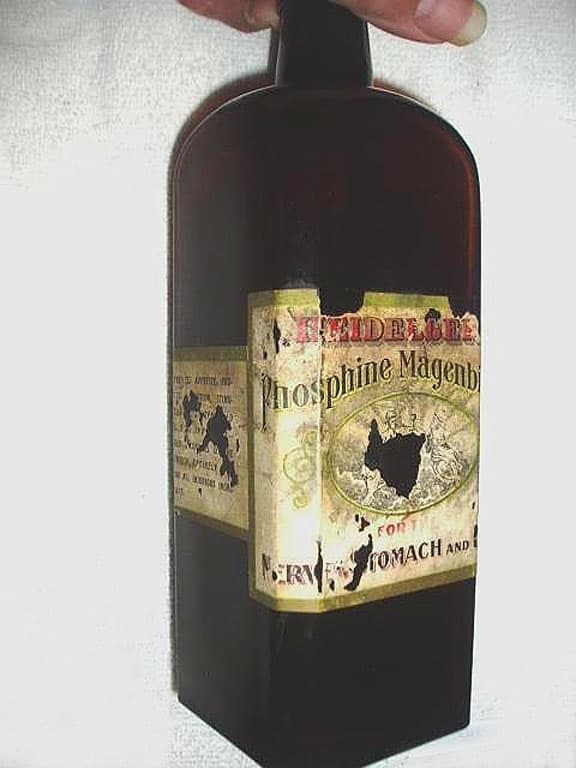 Here is another bitters that long time Texas bottle collector Doyle Bailey turned me on to.

Heidelberg Phosphine Magenbitters was put out by L. Eppstein & Son, Fort Worth, Texas. The amber bottle is 9 x 4 1/2″ with a paper label only. These are the only pictures that were provided and I could not find any others.

The patent for the bitters was filed on 24 June 1905. The product was used for ten years. The Carlyn Ring and W. C. Ham listing in Bitters Bottles is as follows:

The brand mark consists of the word “Heidelberg” associated with the representation of an oval panel with which appear the figures of a man and woman sitting on clouds with the rays of the sun forming a background. Est. 1873. 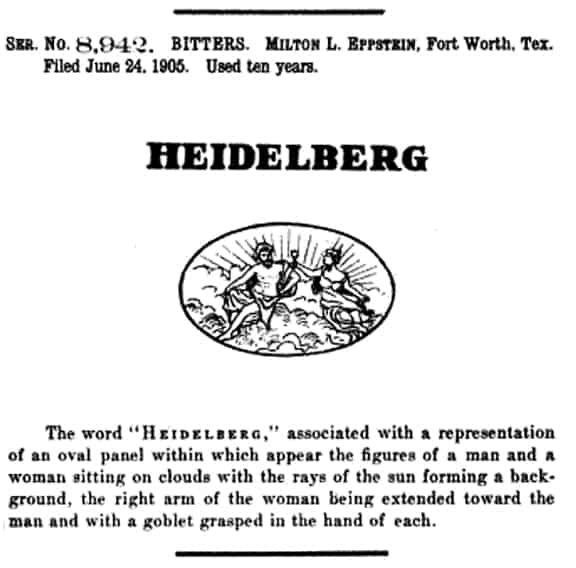 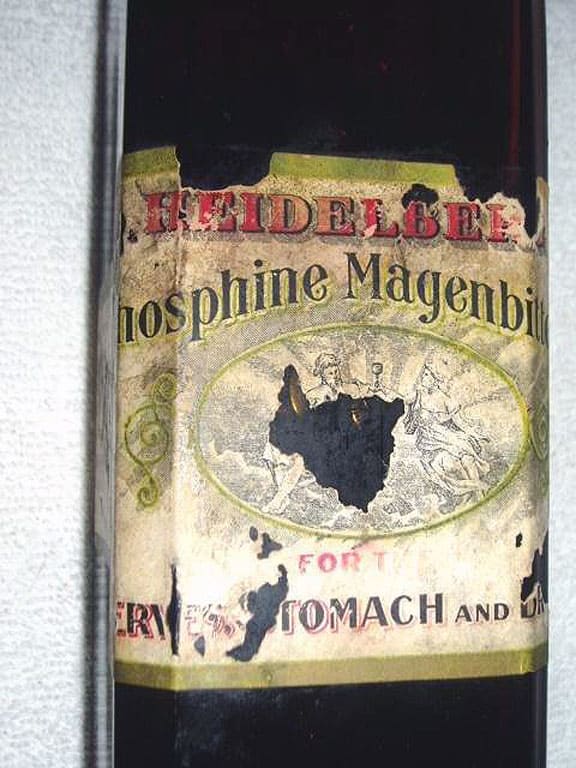 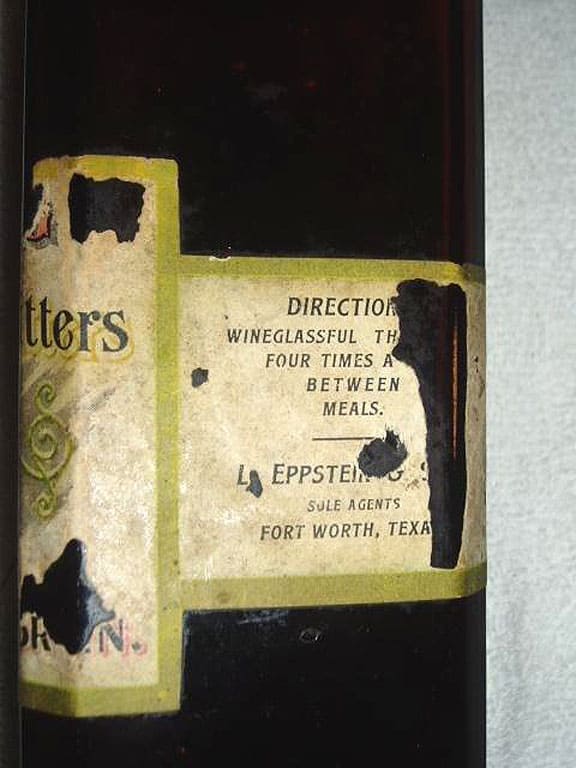 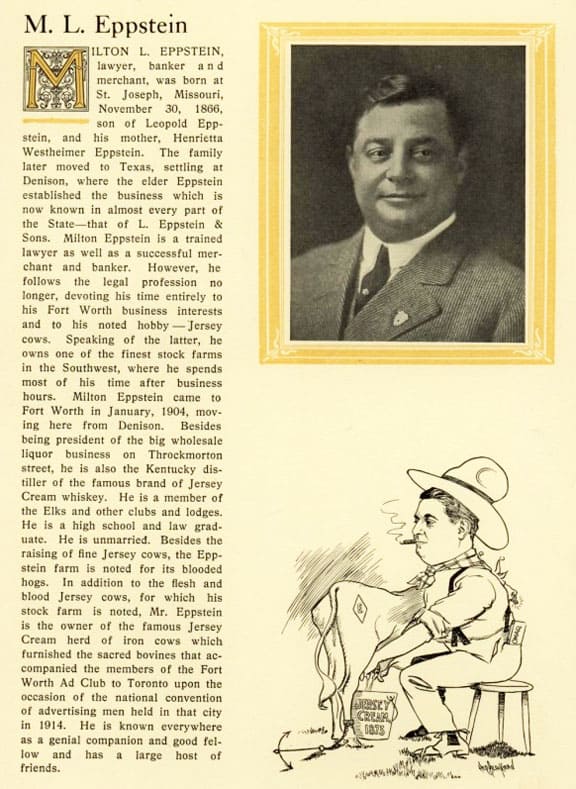 M. L. Eppstein – Newspaper Artists’ Association, Forth Worth.. Makers of Fort Worth, Book, 1914

Milton L. Eppstein, lawyer, banker and merchant, was born at St. Joseph, Missouri, November 30, 1866, son of Leopold Eppstein, and his mother, Henrietta Westheimer Eppstein. The family later moved to Texas, settling at Denison, where the elder Eppstein established the business which is now known in almost every part of the State — that of L. Eppstein & Sons.

Milton Eppstein is a trained lawyer as well as a successful merchant and banker. However, he follows the legal profession no longer, devoting his time entirely to his Fort Worth business interests and to his noted hobby – Jersey cows. Speaking of the latter, he owns one of the finest stock farms in the Southwest, where he spends most of his time after business hours.

Milton Eppstein came to Fort Worth in January, 1904, moving here from Denison. Besides being president of the big wholesale liquor business on Throckmorton Street, he is also the Kentucky distiller of the famous brand of Jersey Cream Whiskey. He is a member of the Elks and other clubs and lodges. He is a high school and law graduate. He is unmarried. 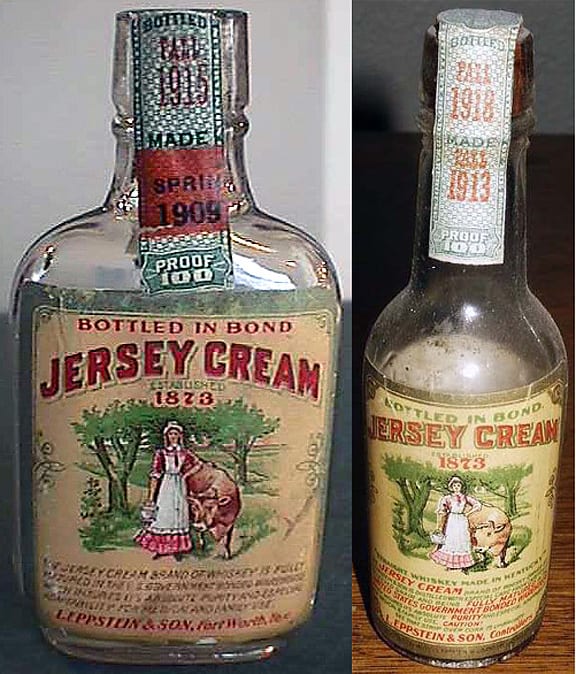 Besides the raising of fine Jersey cows, the Eppstein farm is noted for its blooded hogs. In addition to the flesh and blood Jersey cows, for which his stock farm is noted, Mr. Eppstein is the owner of the famous Jersey Cream herd of iron cows which furnished the sacred bovines that accompanied the member of the Forth Worth Ad Club to Toronto upon the occasion of the national convention of advertising men held in that city in 1914. He is known everywhere as a genial companion and good fellow and has a large host of friends.

The Great Liquor House: Eppstein Bros., at the Kentucky Whiskey Depot, keep a large stock of their celebrated whisky’s always on hand for the trade. Their Paris Bourbon is very choice. Prices to suit the times. Store on Main street.

September 23, 1876: “The Old Reliable. At the old reliable wholesale liquor house of Eppstein Bros. is a complete stock of choice wines of all kinds, brandies, and whiskies. This house still makes a specialty of the old and popular Kentucky whisky, which has had a steadily increasing sale since the opening of the house in the spring of 1873. They also keep a full line of Key West and Havana cigars, as well as the best native brands.” [Source: Denison Daily News, September 23, 1876]

Jersey Cream was distilled in Midway, KY. by the Glenarme Distillery (RD #7, 9th District) and also by R E Wathen (RD #19 of the 5th District of KY?).

Reference Pre-pro.com and other historical documents and directories.

Source: “Makers of Fort Worth” (Fort Worth Newspaper Artists Association, 1914). 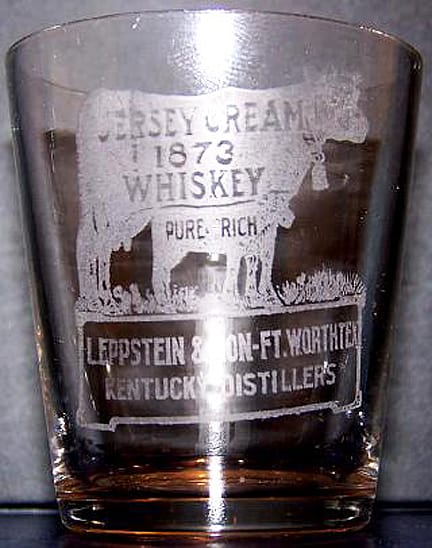 JERSEY CREAM / 1873 / WHISKEY (text is tsp and etched on a picture of a cow) / PURE AND (slanted) RICH (tsp text etched on a frosted calf standing at the side of the cow). / L EPPSTEIN & SON-FT.WORTHTEX / KENTUCKY DISTILLERS (final lines are enclosed within a rectangular frame outline) – Pre-pro.com 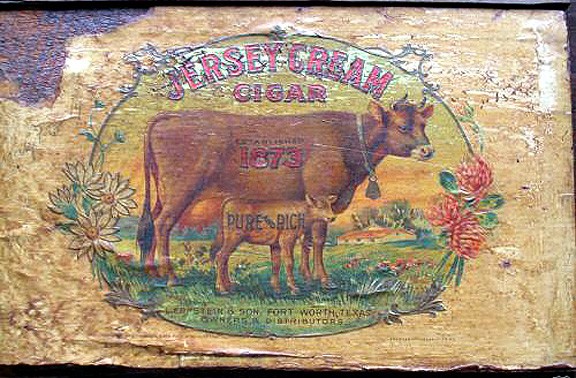 A print from a cigar box advertising “Jersey Cream” Cigars from L Eppstein & Son of Ft. Worth, TX. It features a cow and calf. The text below the cow reads “L. EPPSTEIN & SON. FORT WORTH, TEXAS / OWNERS & DISTRIBUTORS.” – Pre-pro.com

Ferdinand Meyer V is a native of Baltimore, Maryland and has a BFA in Fine Art and Graphic Design from the Kansas City Art Institute and School of Design. Ferdinand is the founding Principal of FMG Design, a nationally recognized design consultation firm. Ferdinand is a passionate collector of American historical glass specializing in bitters bottles, color runs and related classic figural bottles. He is married to Elizabeth Jane Meyer and lives in Houston, Texas with their daughter and three wonderful grandchildren. The Meyers are also very involved in Quarter Horses, antiques and early United States postage stamps. Ferdinand is the past 6-year President of the Federation of Historical Bottle Collectors and is one of the founding members of the FOHBC Virtual Museum.
View all posts by Ferdinand Meyer V →
This entry was posted in Bitters, Druggist & Drugstore, History, Liquor Merchant, Medicines & Cures, Spirits, Whiskey and tagged Augsberg, Bavaria, Denison, Doyle Bailey, Fort Worth, Germany, Heidelberg, Heidelberg Phosphine Magenbitters, Jersey Cows, Jersey Cream, L. Eppstein & Son, Leopold Eppstein, Milton L. Eppstein, texas. Bookmark the permalink.