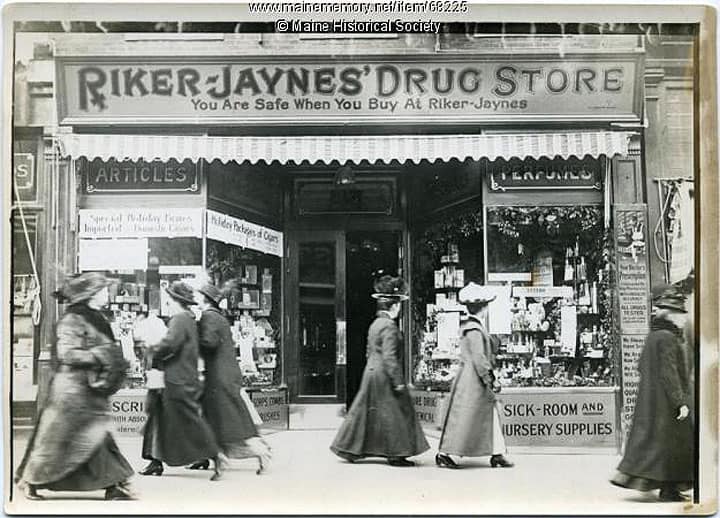 “You Are Safe When You Buy At Riker-Jayne.” 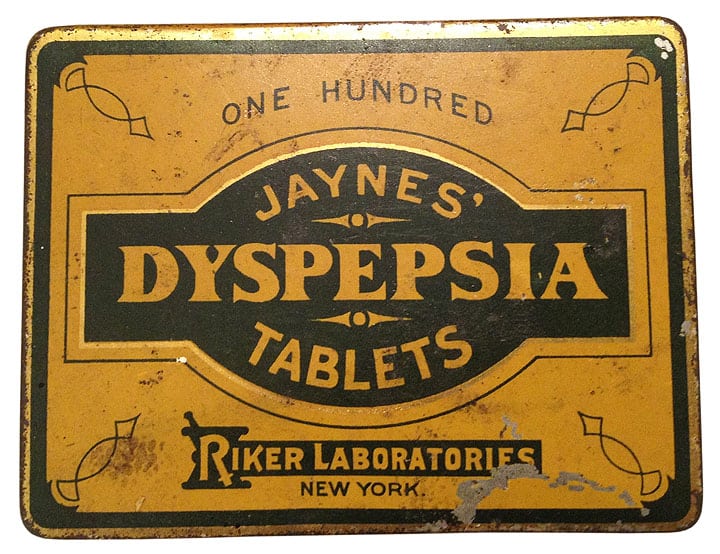 Over on the Peachridge Glass facebook page and in response to the Dr. D. Jayne & Son – The Almanac King post, Lori Burns-Joyce said that she has a small, 2-2 1/2″ bottle that says Riker~Jayne’s Drug Store USA and wondered if it was related?

This set off an Internet search that quickly provided the topmost picture of the Riker – Jaynes’ Drug Store in Portland, Maine in 1913. The tagline under their name on the sign is “You Are Safe When You Buy At Riker-Jayne.” Brian Shultis quickly posted the advertisement further below promoting the 92nd Riker-Jaynes Drug Store in the Lewiston (Maine) Evening Journal, on 01 November 1913. Wow, that’s quite an operation. Now all we need to do is link the “Jayne’s” back to Dr. D. Jayne. Shouldn’t be too hard. Has to be the same name. 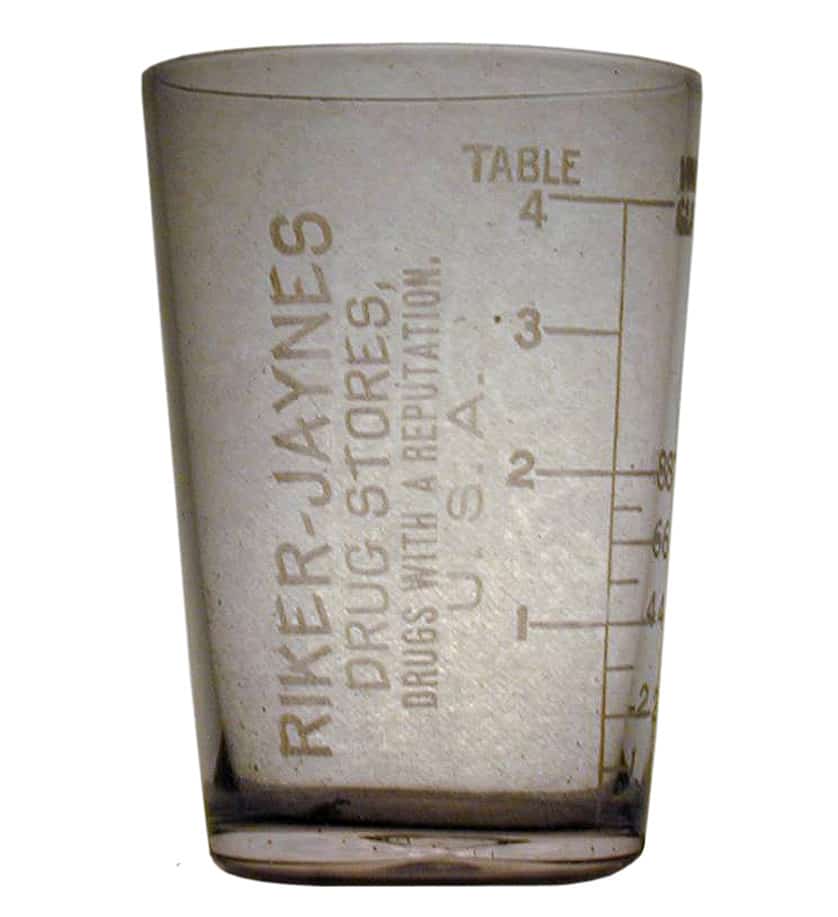 Nowadays it seems that there is a Walgreen’s, Rite-Aid or CVS Pharmacy on every corner. The ‘mom & pop’ pharmacy and sundry shop have for the most part, long vanished and have been replaced by the mega chains. As a child, I remember drug stores and small shops on every corner in Towson, Maryland. Many had jars of candy, baseball cards and all kinds of cool stuff to entertain and tempt you as your mother was picking up a prescription or talking to a clerk. 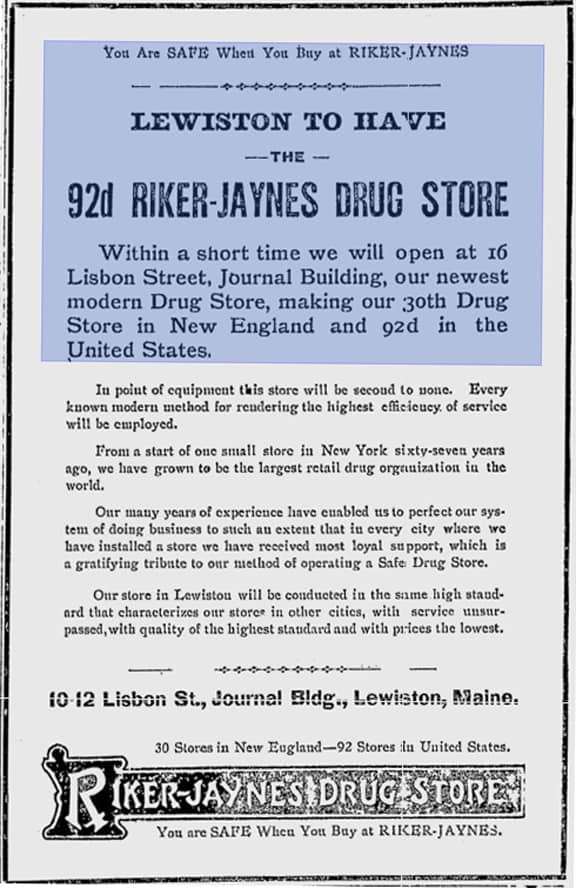 From what I can see, Dr. David Jayne was operating out of Philadelphia in 1836 as he purchased a drug store at No. 20 South Third Street where he engaged in the sale of drugs and in medical practice, laid the foundation of his subsequent great business in the sale of proprietary medicines.

“has come the announcement that a complete merger of the Riker-Hegerman-Jaynes stores, and of the United Cigar Store Company, with its 1,100 stores is about to be accomplished.” 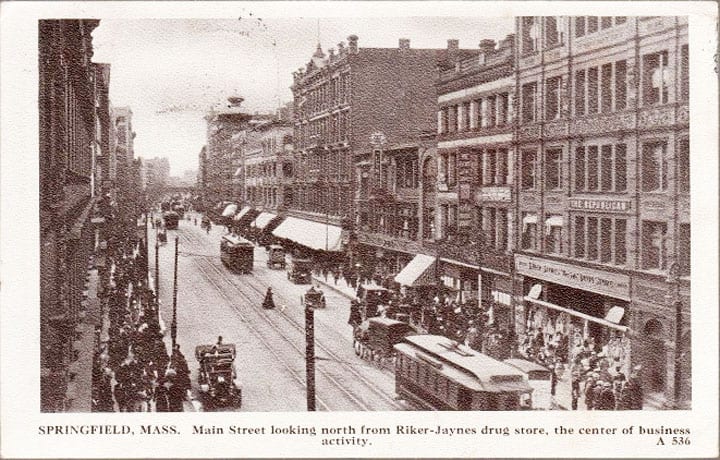 At some point I surmise, Dr. Jayne must have crossed paths, competed with and eventually joined up with William B. Riker in the Pharmacy business. It may have been that Jayne simply realized that he needed a stronger retail outlet to spread the name and sell his growing number of products. Riker was a native New Yorker who entered the drug business in 1846. After serving as a clerk for some years, Riker opened a drug store of his own accord on lower Sixth Avenue. After years of service he retired in favor of his son William H. Riker. Before retiring, he founded the William B. Riker & Son Company. 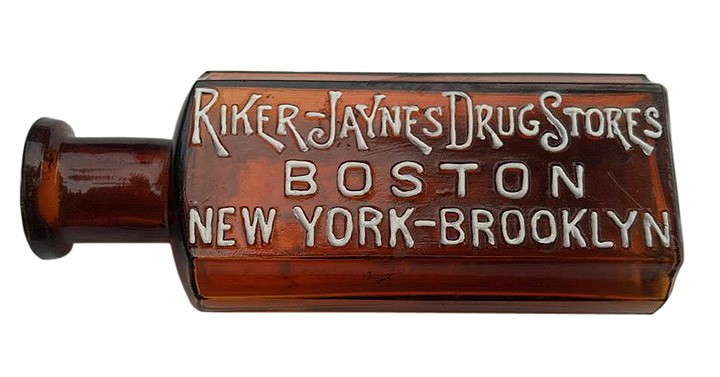 In the 1908 Bulletin of Pharmacy, the business of the Ryker-Jaynes drug stores in Boston was described and illustrated. At that time, there were seven in number. The business was then owned by the William B. Ryker & Son Co. which operated nine stores in New York and Brooklyn, making a total of 16 stores under one management and ownership.

By 1914, it was the Riker-Hegeman Corporation of New York with a drug store chain with 105 stores. It was growing at the rate of more than three stores per month. The average druggist turned over their inventory three or four times per year, while the Riker-Hegeman chain claimed twelve. And they kept growing.

From the American Druggist in 1915, “as as sequel to the recent partial realization of the long cherished plans of George J. Whelan, president of the United Cigar Stores Company, to control a chain of retail drug stores, similar to the cigar store chain which has long been established upon a highly profitable basis, has come the announcement that a complete merger of the Riker-Hegerman-Jaynes stores, and of the United Cigar Store Company, with its 1,100 stores is about to be accomplished. 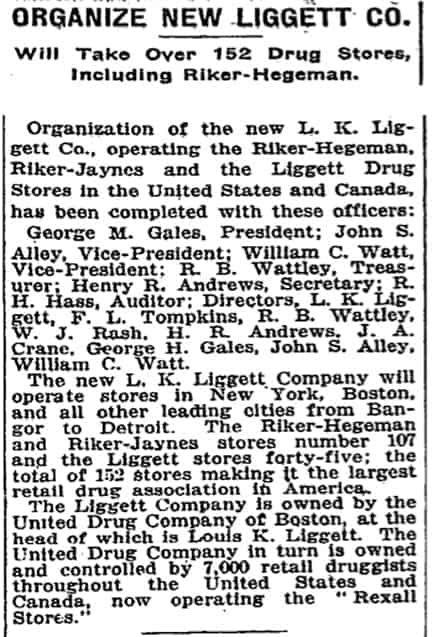 Next came the huge mergers with United Drug Company (Rexall) and L.K. Liggett Company. Eventually, more and more mergers occurred leading us up to the sterile Walgreens, Rite-Aid and CVS Pharmacies dominating our retail corners. I dread going in to these places that always seem to be one holiday or two ahead of the real world.