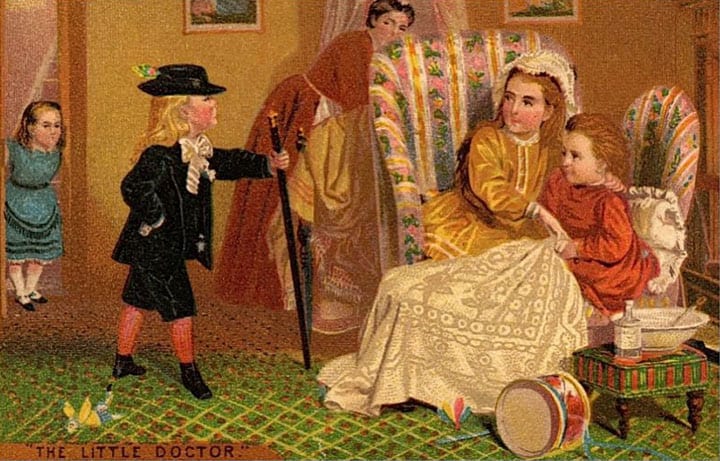 I was spinning around the Internet earlier today and came across three really neat Internal Revenue Proprietary Stamps (pictured below) for Dr. D. Jayne & Son from Philadelphia. Of course I had heard of Dr. Jayne as a bottle collector but I wanted to know a little more. Much has been written on this famous company that was in business for over 100 years. I won’t go deep there but I will reference you to a fine past article by John (Digger) Odell that I enjoyed reading (further below). My interest, as a artist, student of architecture and stamp collector was in some of the ‘cool pieces’ that carry the Jayne name. 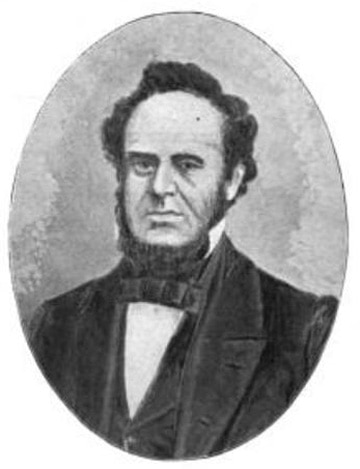 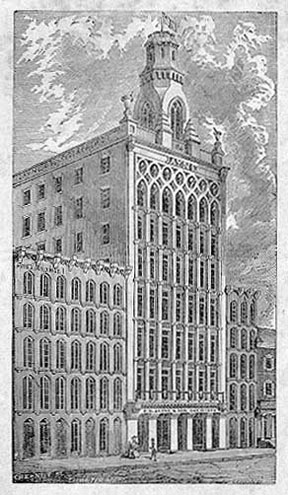 David Jayne (pictured above) was the son of Ebenezer Jayne (died 1826) who was a Baptist minister. His place of birth in 1799 is given variously as Stroudsburg, Bushkill or Middle Smithfield, Pennsylvania, all towns along the Delaware River.

In 1818, Jayne began the study of medicine at the University of Pennsylvania in Philadelphia. After completing his studies he began to practice as a rural family doctor in Salem, New Jersey in 1822. He first started introducing his own medicines around 1830. He eventually moved up the river in the mid 1830s to Philadelphia, where he purchased a drug store on South Third Street.

Jaynes business grew rapidly as Dr. David Jayne’s “Family Medicines” and by the late 1840s he had successfully marketed eight proprietary medicines including Jayne’s Carminative Balsam, American Hair Dye and Jayne’s Hair Tonic. Jayne’s Alterative was then introduced in 1851. In 1855 Dr. Jayne joined with his sons David W. and Eben C. Jayne as well as John K. Walker to form the firm Dr. Jayne & Son. Why he did not put “Sons” in the name is not evident.

In 1843 Jayne produced and distributed one of the first medical almanacs in America. He used the annual almanac as an effective marketing tool to promote the Dr. Jayne brand. Over the next ninety-seven or so years they printed and distributed more than 500 million almanacs with the last one being published in 1940. These almanacs, in the second half of the 1800s and out, were used primarily as a means to push his patent medicines.

By this time Dr. Jayne’s was a large drug company located at 242 Chestnut Street in the heart of Philadelphia. The cover of the Dr. Jayne’s Medical Almanac clearly displayed the large, 10-story building the company constructed between 1848-1850 to house its expanding business. At the time, Dr. Jayne’s building was one of the most conspicuous buildings in Philadelphia. Unsurprisingly, it continued to adorn the cover of Dr. Jayne’s almanac for many decades. (references: An Annotated Catalogue of the Edward C. Atwater Collection of American Popular Medicine and Health Reform: A-Z Supplement, Philadelphia Area Center for History of Science, Hair Raising Stories) 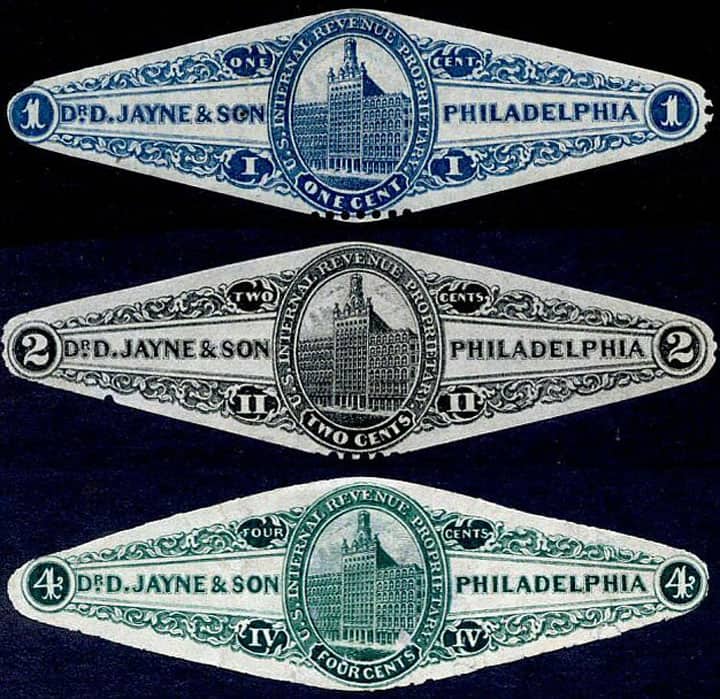 Dr. D. Jayne & Son Private Die Stamps – The one-cent blue, two-cent black and four-cent green private die stamps were first issued in January of 1863. The one-cent was last delivered on February 19, 1883, the two-cent on March 6 and the four-cent on February 7 of that year. Several copies exist printed in orange and red, but it is not certain these were ever put into use. – www.rdhinstl.com 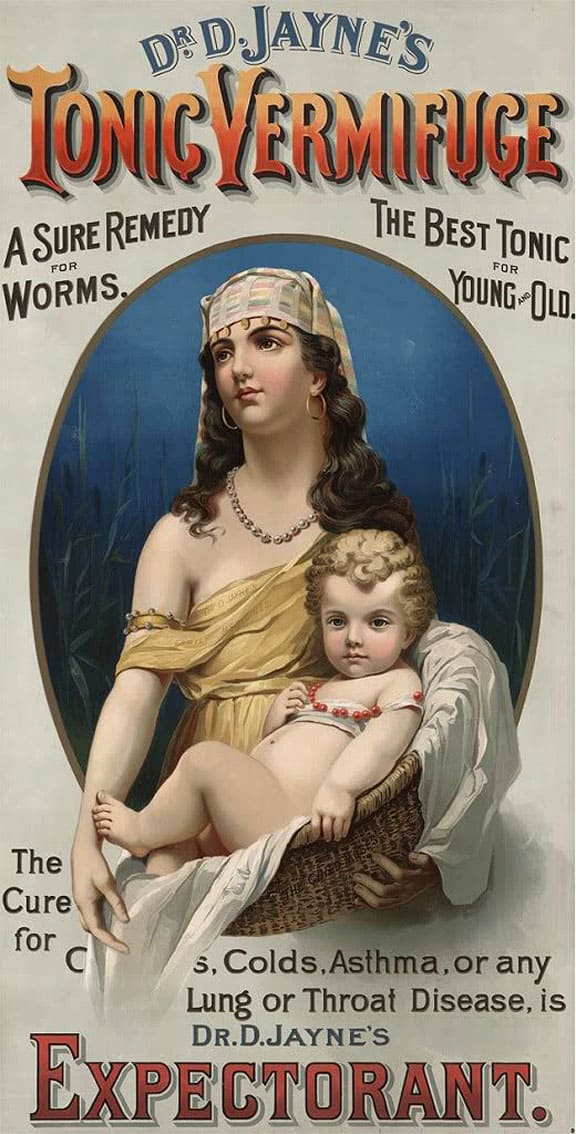 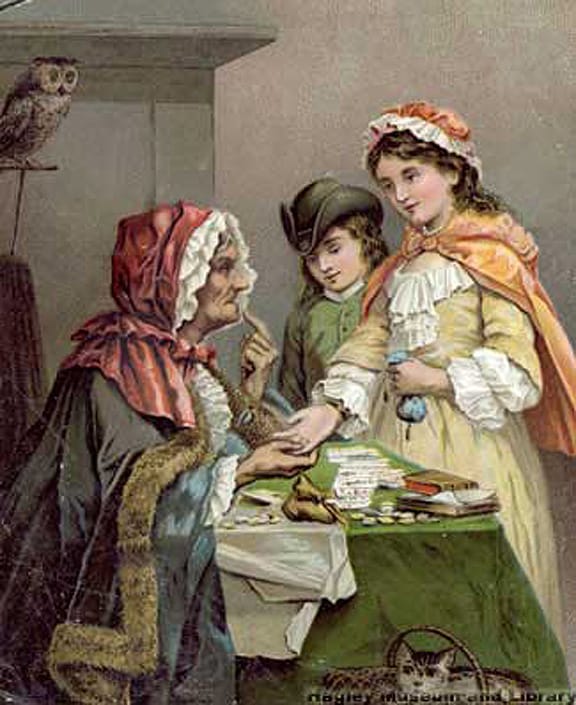 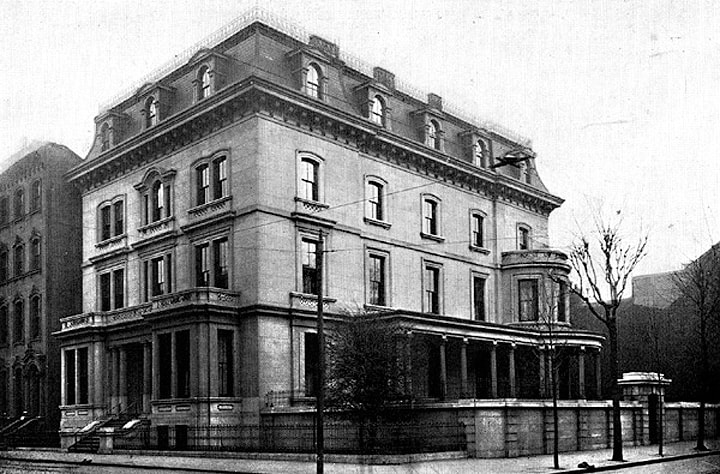 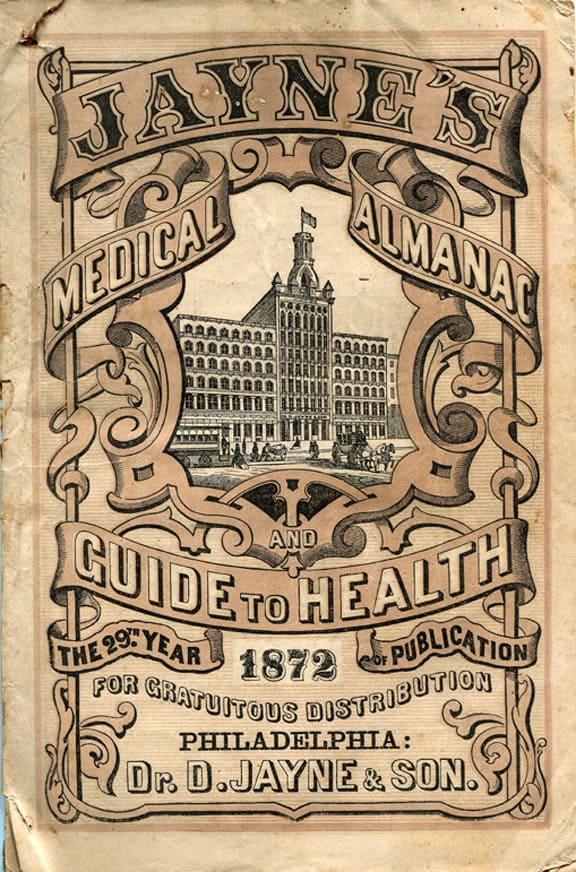 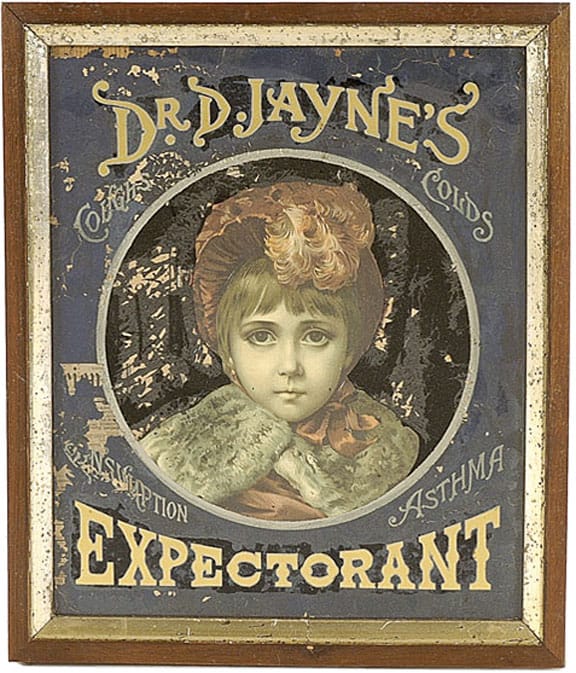 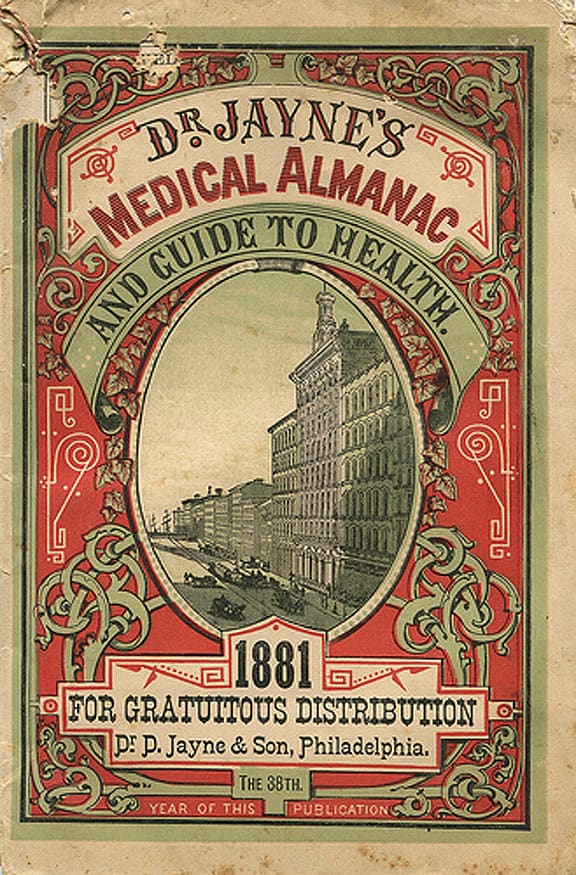 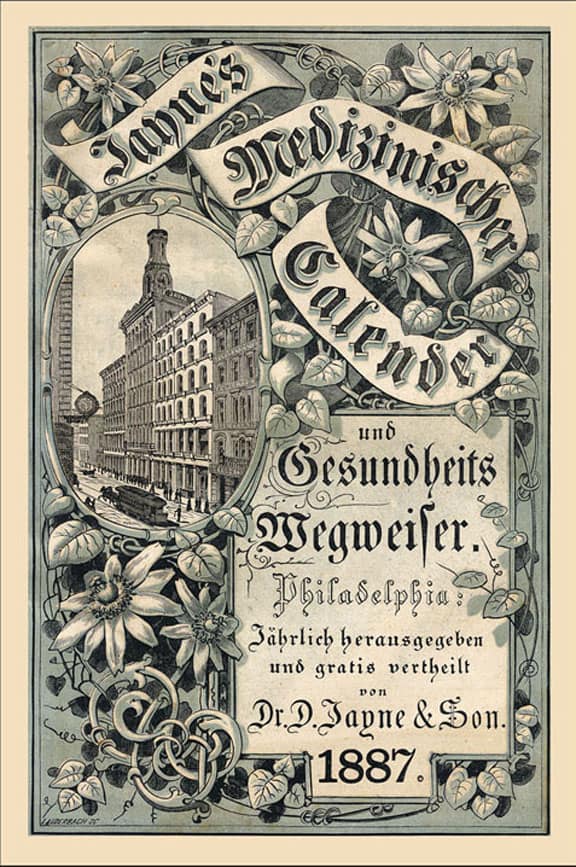 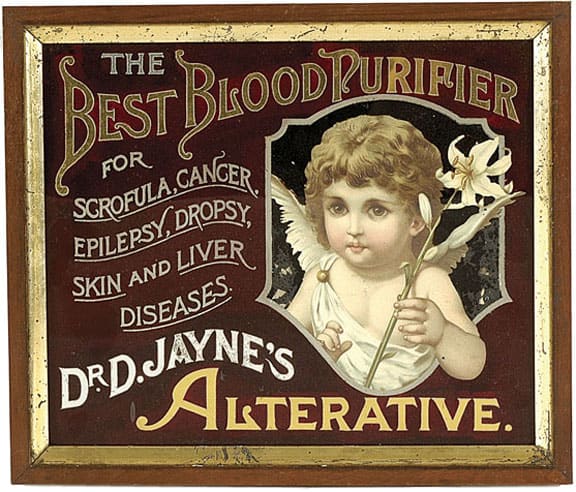 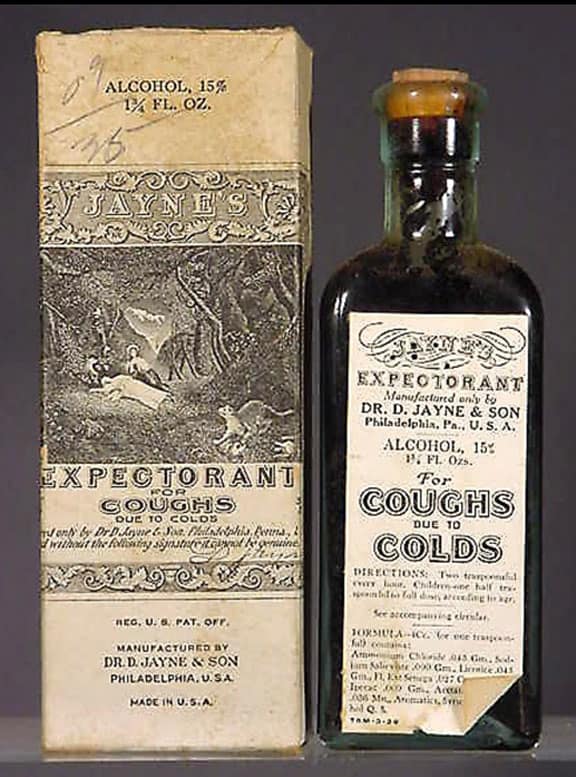 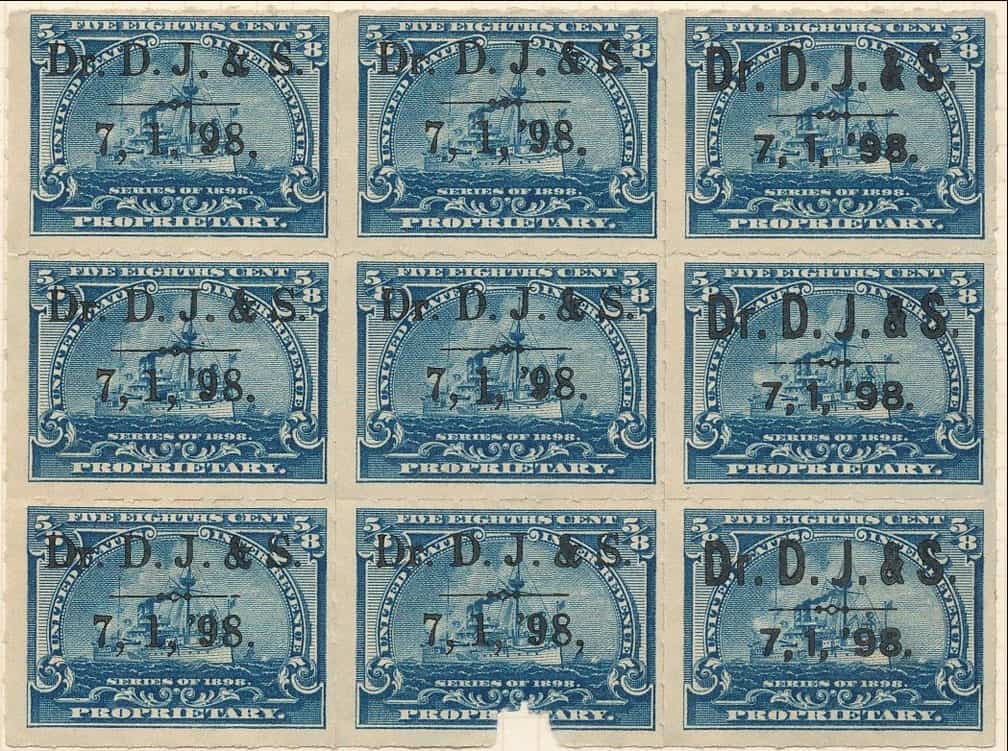 Dr. D. Jayne & Son cancellation on block of nine Proprietary stamps. The six stamps on the left are of a single font different from the three stamps on the right. – 1898 Revenues 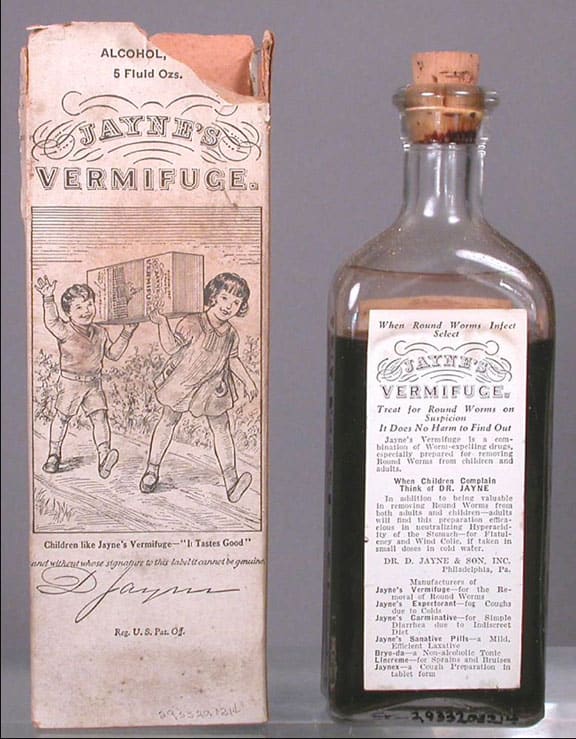 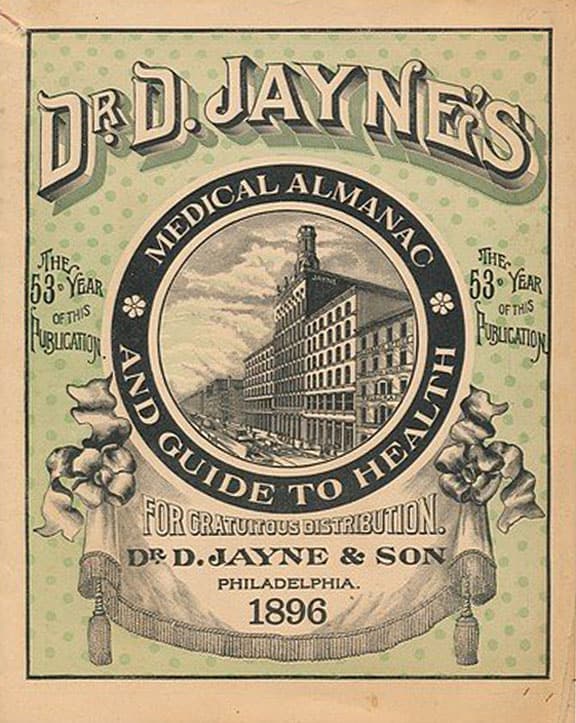 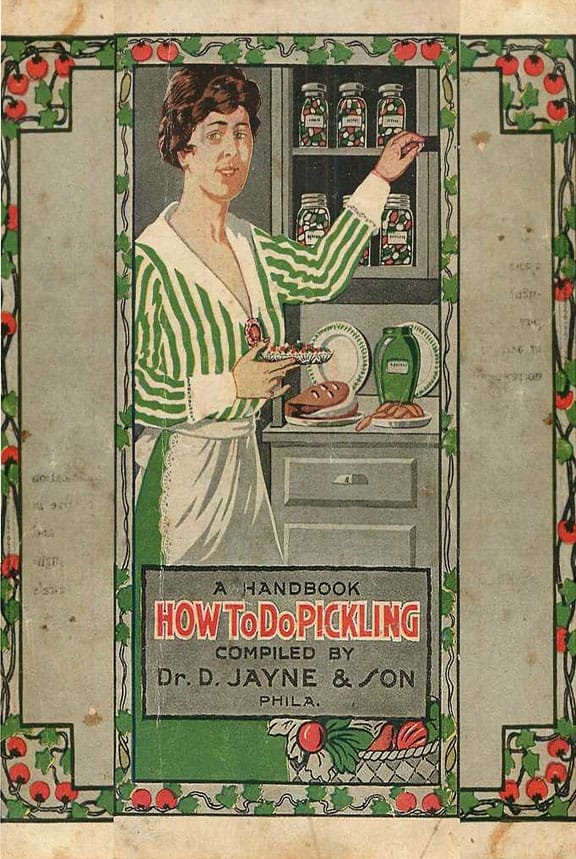 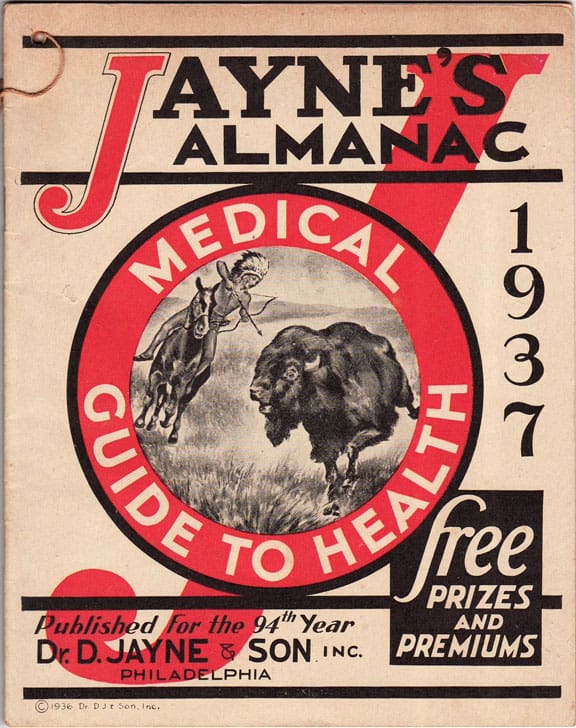 Finally getting away from using their building on the cover. Jaynes Almanac and Medical Guide to Health – 1937 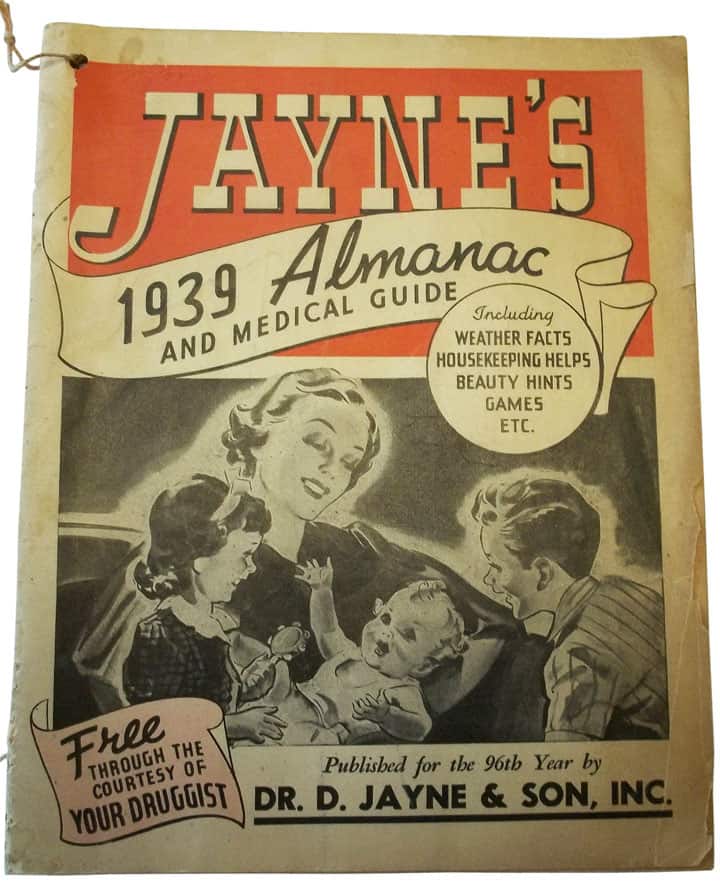 Ferdinand Meyer V is a native of Baltimore, Maryland and has a BFA in Fine Art and Graphic Design from the Kansas City Art Institute and School of Design. Ferdinand is the founding Principal of FMG Design, a nationally recognized design consultation firm. Ferdinand is a passionate collector of American historical glass specializing in bitters bottles, color runs and related classic figural bottles. He is married to Elizabeth Jane Meyer and lives in Houston, Texas with their daughter and three wonderful grandchildren. The Meyers are also very involved in Quarter Horses, antiques and early United States postage stamps. Ferdinand is the past 6-year President of the Federation of Historical Bottle Collectors and is one of the founding members of the FOHBC Virtual Museum.
View all posts by Ferdinand Meyer V →
This entry was posted in Advertising, Druggist & Drugstore, Ephemera, Hair Tonics, History, Medicines & Cures, Publications, Tax Stamps, Tonics and tagged almanac, David Jayne, Dr. D. Jayne & Son, Ebenezer Jayne, Jayne's Expectorant for Coughs due to Colds, Jayne's Vermifuge, Pennsylvania, Philadelphia, Proprietary Stamp. Bookmark the permalink.