Out of millions of early ad cards that we have seen offered for sale, this is the one & only ad card we have ever seen which has a Mason’s fruit jar depicted on it. 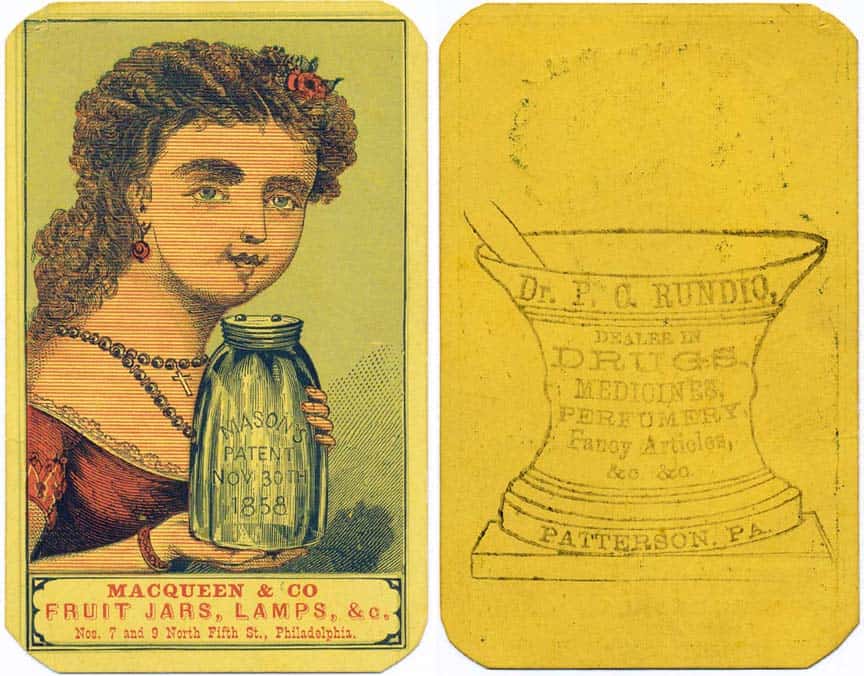 I really like this trade card currently on ebay showing this Rubenesque lady (Read: The Rubenesque Queens) holding a Mason’s Patent Nov. 30th 1858 fruit jar. I have never heard of MacQueen & Co. or Dr. P.C. Rundio. What caught my attention also was the sellers comment “Out of millions of early ad cards that we have seen offered for sale, this is the one & only ad card we have ever seen which has a Mason’s fruit jar depicted on it.” Wow. The listing reads:

Out of millions of early ad cards that we have seen offered for sale this is the one & only ad card we have ever seen which has a Mason’s fruit jar depicted on it. An extremely rare & significant subject to find on an advertising card!!

The card measures 3 31/32 inches long by 2 15/32 inches wide. The corners have in period trim which does not effect the image. The top left corner has a bump & a small tear. Please examine the clear photos that we have provided & purchase based on your own opinion as to the condition. imajgin 100% Positive Feedback

It is odd when I look for the name MacQueen & Company in the Philadelphia directories as I do not readily come across the listing name. I do see a few listings for S. A. MacQueen on 1427 Walnut Street, Watches, Clocks, Jewelry, etc. Obviously the same company. Another listing after the turn of the century says S. A. MacQueen Company – Philadelphia, Pa., Dec 11 1916, Capital $60,000. Manufacture, buy, sell, deal and generally trade in silverware, plated-ware, jewelry, watches, clocks, mahogany, ware, works of ornament and art, paintings and other similar or cognate articles of commerce. Unfortunately these listings are way to late to tie directly back to the trade card. We need to find something in the mid to late 1800s.

It just seems that the one trade card I can find for this company shows a lady holding a Mason’s Fruit Jar. Why wouldn’t she be holding a clock, wearing a watch or eating off a plate? The card clearly says “Fruit Jars”. I just do not see the connection.

Next I searched for Dr. P.C. Rundio from Patterson, Pa. His drug store stamp is on the back of the card. Why is his name on the card? I did find a listing for Dr. Rundio.

The Adams Express Company established an office in Patterson in 1857, with James North as agent. The office was moved to Mifflintown. A post-office was established in Patterson, with James North as postmaster, May 1, 1852; and he held the office five years. Since then the postmasters have been James North, F. J. Mickey, Joseph Pennell, R. E. Parker, Dr. P. C. Rundio, J. B. M. Todd, Samuel Strayer, Samuel Brown, W. W. Copeland, Howard Kirk. (1866)

Here we go. This is an 1866 or so listing. Now we have the right time period. Further research tags him as being born in 1838 and living in Mifflintown, PA in 1860 and practicing as a physician according to the 1860 Federal Census. From the 1870s until 1900 he is listed as living in Williamsport, PA.

It would be interesting to hear from a few of the fruit jar and trade card collectors on this topic.

“I googled hard, and couldn’t find another image of a Victorian Trade Card that pictures a fruit jar. Weird.” 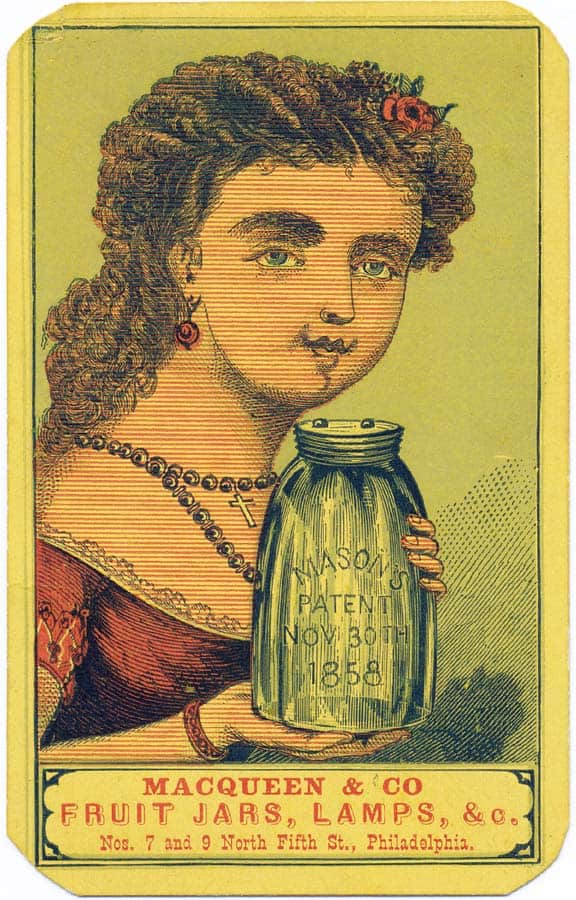 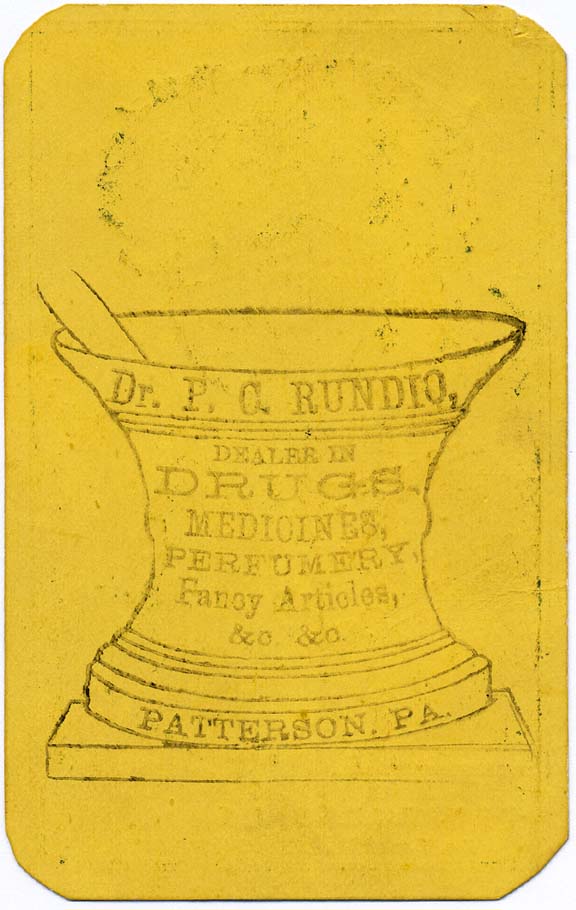 Ferdinand Meyer V is a native of Baltimore, Maryland and has a BFA in Fine Art and Graphic Design from the Kansas City Art Institute and School of Design. Ferdinand is the founding Principal of FMG Design, a nationally recognized design consultation firm. Ferdinand is a passionate collector of American historical glass specializing in bitters bottles, color runs and related classic figural bottles. He is married to Elizabeth Jane Meyer and lives in Houston, Texas with their daughter and three wonderful grandchildren. The Meyers are also very involved in Quarter Horses, antiques and early United States postage stamps. Ferdinand is the past 6-year President of the Federation of Historical Bottle Collectors and is one of the founding members of the FOHBC Virtual Museum.
View all posts by Ferdinand Meyer V →
This entry was posted in Druggist & Drugstore, Fruit Jars, Questions, Trade Cards, Uncategorized and tagged Dr. P.C. Rundio, Fruit Jar, MacQueen & Co., Marianne Dow, Mason's Patent Nov. 30th 1858, Mifflintown, Pennsylvania, Philadelphia, Williamsport. Bookmark the permalink.