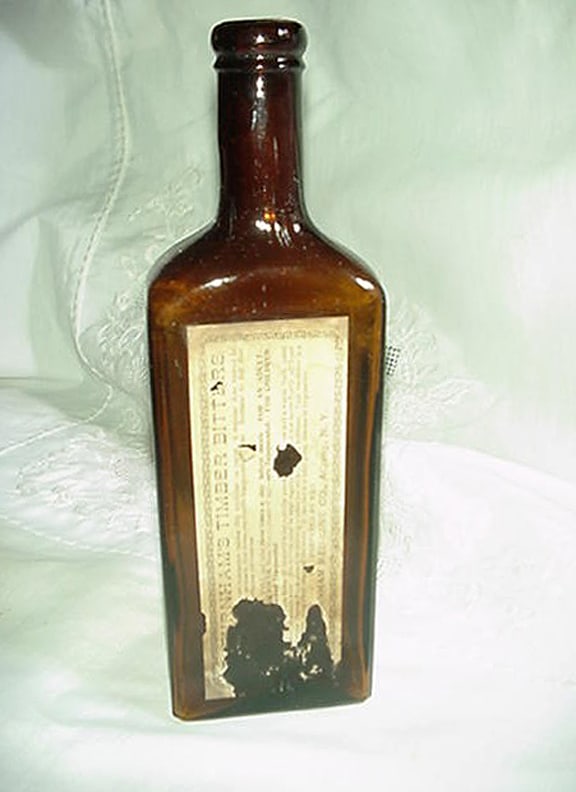 Here is another oddball Bitters that surfaced yesterday when Brian Wolff was doing some online research for M.S. James’ Family Bitters. He came across the labeled Burnham’s Timber Bitters on an antique web site (Lake County Antiques) in New Jersey. Unfortunately the label is in pretty bad shape. A quick look around, provided for quite a few large rectangle advertisements for Timber Bitters in far upstate New York (Watertown, Chateaugay, Altamont etc). Interesting that the Burnham name is absent (or is it). The upstate ads are a real clue as to this products origin. 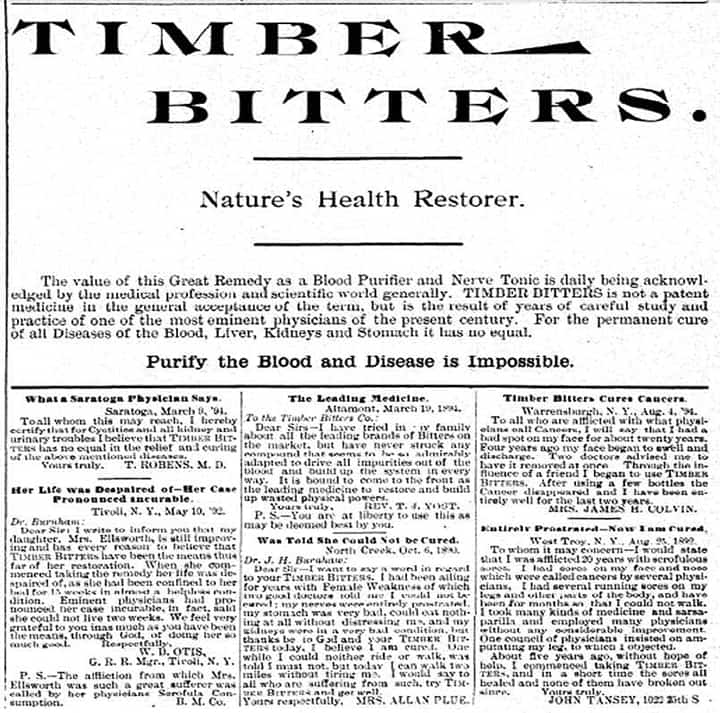 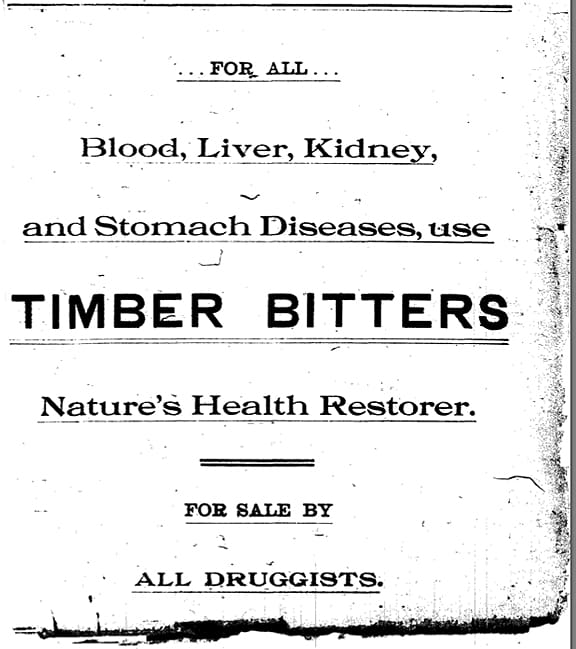 It looks like we have another unlisted Bitters that will require a number from Bill Ham for the next Bitters Bottles Supplement. Should it be a “T” listing for “Timber” or a “B” listing for Burnham’s? That is the question.

There is a picture of the label which I suspect is the front label, and the one pictured on the bottle is probably the rear label.

If you look closely at the label on the bottle, you can barely make out Burnham Medicine Co. (something) N.Y. At first I thought we are probably talking about a major merchant during this time period named Elmer S. Burnham. The obvious problem here is, why would a grocer in New York City be advertising in the much smaller upstate New York newspapers and not locally. 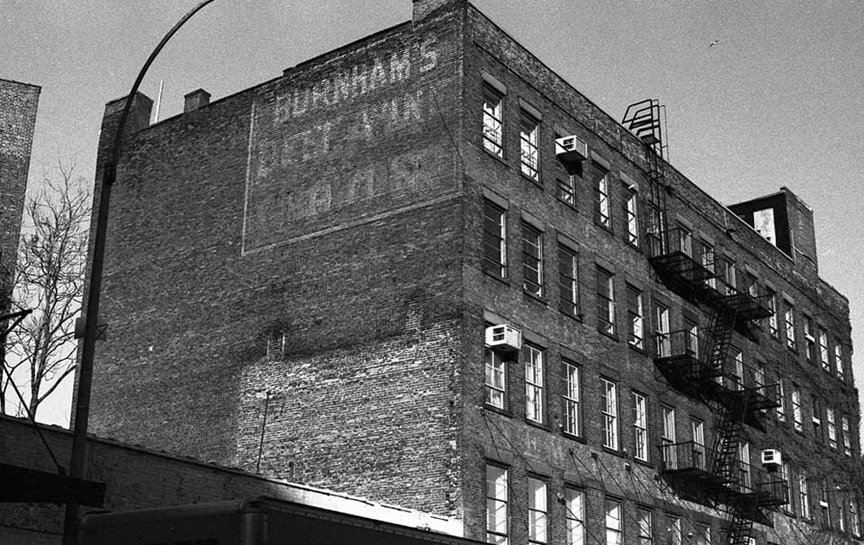 From the New York Times, 6 Jan. 1941, “East Orange, N. J., Jan. 5 – Elmer S. Burnham, founder and retired president of the E. S. Burnham Packing Company of New York, which he established in 1890, died here last night at his residence, 67 Watson Avenue, after a short illness. Born in Deerfield, Mich., 87 years ago, he was a grain broker in Chicago before entering the packing business. A son, S. M. Burnham, lives in Florida.” The subject of this notice was Elmer S. Burnham (1855-1941). 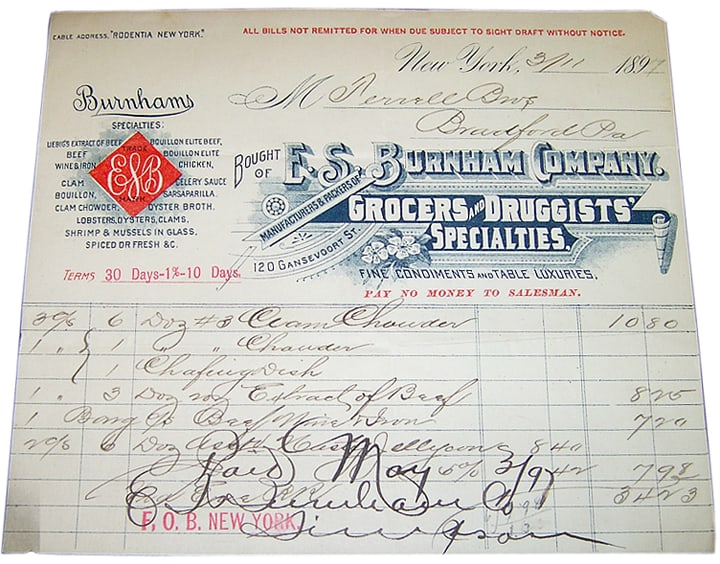 Burnham’s in New York began as E. S. Burnham Co. Manufacturers Grocers’ Specialties at 120 Gansevoort St. around 1894, and moved to 53-61 Gansevoort in 1897. They were located here until 1929. Their products were groceries, produce, and druggist sundries. Apparently the sundries included medicinal tonics and extracts, as well as clam bouillon. 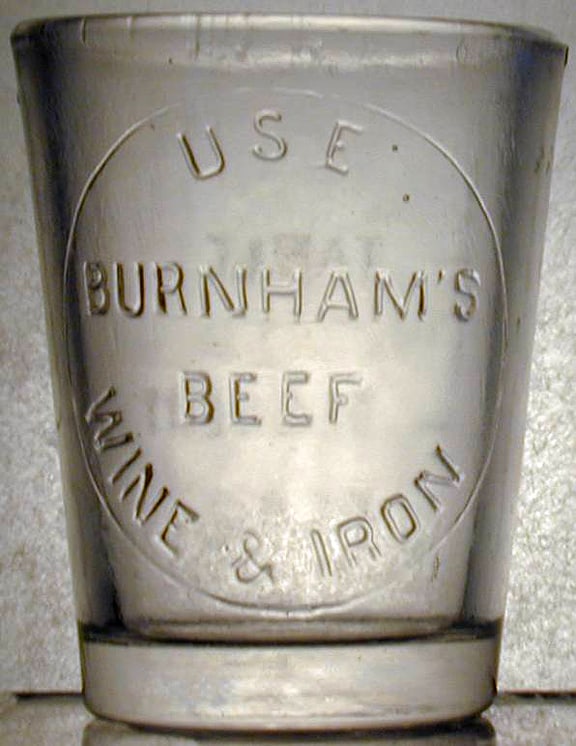 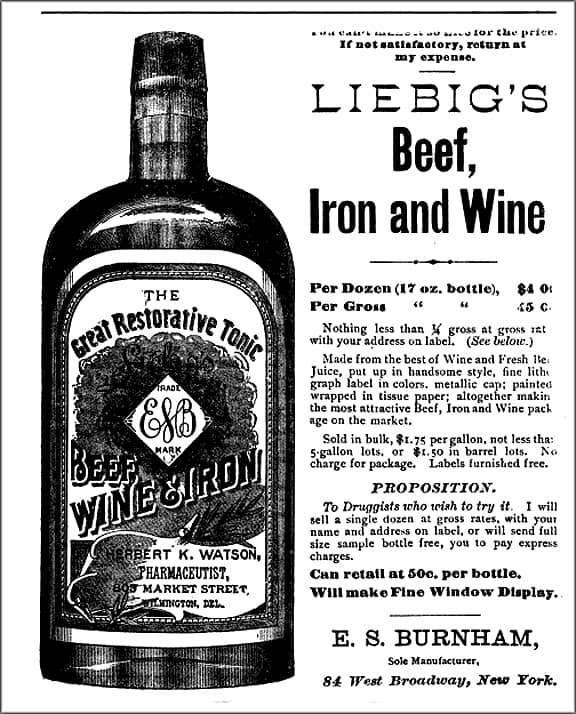 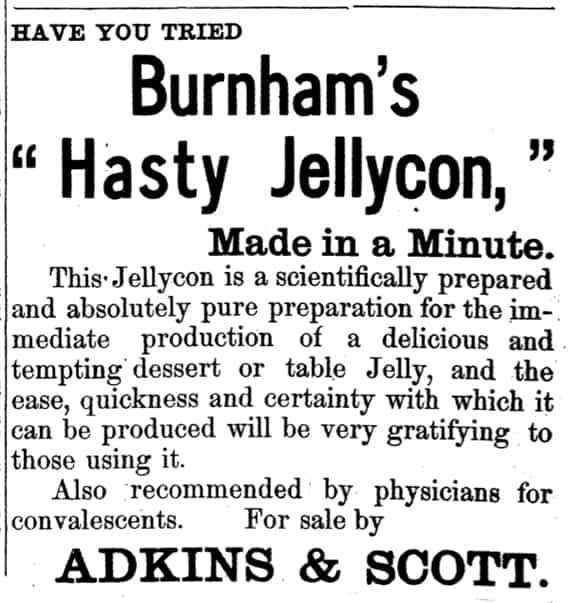 Burnham’s “Hasty Jellycon” advertisement – Ticonderoga Sentinel-1898. This was another Burnham product which was a forerunner to today’s jello, a powdered dessert gelatin called Hasty Jellycon.

Then I thought we might be talking about Charles Burnham as there are a number of listings for a Pharmacist named Charles Burnham in New York City around 1886. I believe he might be the father of the famous NY architect, Daniel Hudson Burnham. His father was listed as a rather unsuccessful Physician.

A neat bottle with a Burnham’s Pharmacy Boston label for CRUDE PETROLEUM. Now why would anybody need this? 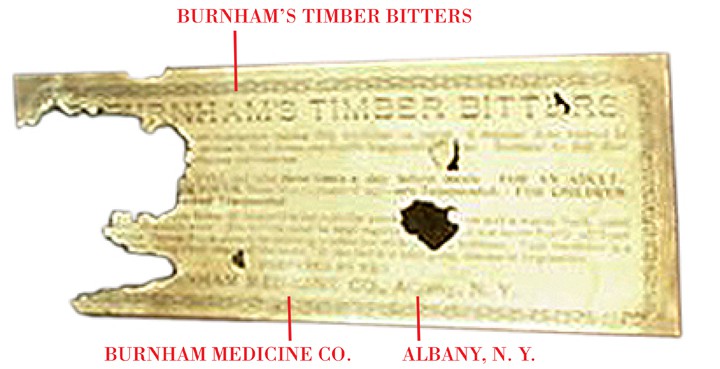 The key here is realizing that this must be an “A” for Albany, New York

Cracking this case involved looking at the torn label more closely and the missing city name in the above picture and realizing this was not New York City but probably Albany, New York on the label. That would explain Timber Bitters being advertised in Watertown, Chateaugay and Altamont which is in the orbit and reach of Albany. When I googled Burnham Medicine Company in Albany, I found the listing below for the Burnham Medicine Co, 710 Broadway in Albany, NY. This is where I am today. Not many directions left. I still can not make a definitive tie to Timber Bitters to Burnham Medicine Company. 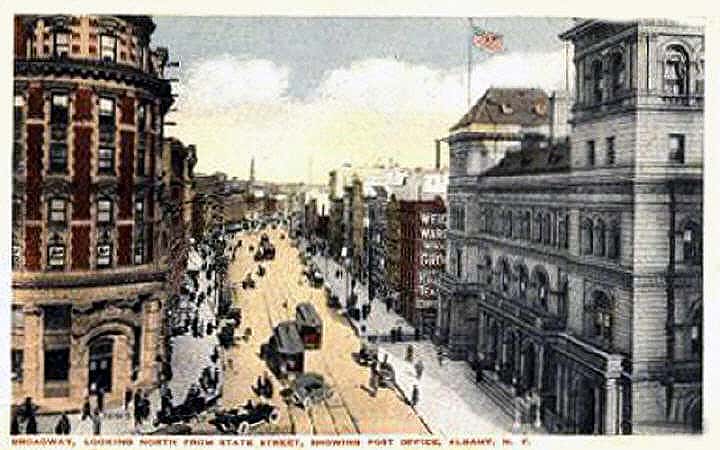 Updated with incoming advertisement provided by Brian Wolff. Looks like we are talking about a Dr. J.H. Burnham.

Advertisement with the “Purify the Blood” header that ties back to the square Timber Bitters ads at the top of the post. Dr. J.H. Burnham and Timber Bitters noted. – The Otsego Farmer, Cooperstown, NY Jan. 3, 1896

Update: Timber Bitters is listed as being made by company #361 in The Pharmaceutical Era, Volume 27 (1902). Company #361 is the Burnham Medicine Company of Albany, New York. They may have been located elsewhere. There is an article about the company’s annual meeting in a 1894 edition of the Warrensburg, New York newspaper, indicating at that time it was located in Fort Edward, and that the company’s president was J. H. Durkee, with Dr. J. H. Burnham listed as “assistant secretary”.

Ferdinand Meyer V is a native of Baltimore, Maryland and has a BFA in Fine Art and Graphic Design from the Kansas City Art Institute and School of Design. Ferdinand is the founding Principal of FMG Design, a nationally recognized design consultation firm. Ferdinand is a passionate collector of American historical glass specializing in bitters bottles, color runs and related classic figural bottles. He is married to Elizabeth Jane Meyer and lives in Houston, Texas with their daughter and three wonderful grandchildren. The Meyers are also very involved in Quarter Horses, antiques and early United States postage stamps. Ferdinand is the past 6-year President of the Federation of Historical Bottle Collectors and is one of the founding members of the FOHBC Virtual Museum.
View all posts by Ferdinand Meyer V →
This entry was posted in Bitters, Depression Glass, Digging and Finding, History and tagged Albany, Charles Burnham, Dr. J.H. Burnham, E.S. Burnham, Elmer S. Burnham, Hasty Jellycon, New York, New York City, Timber Bitters. Bookmark the permalink.