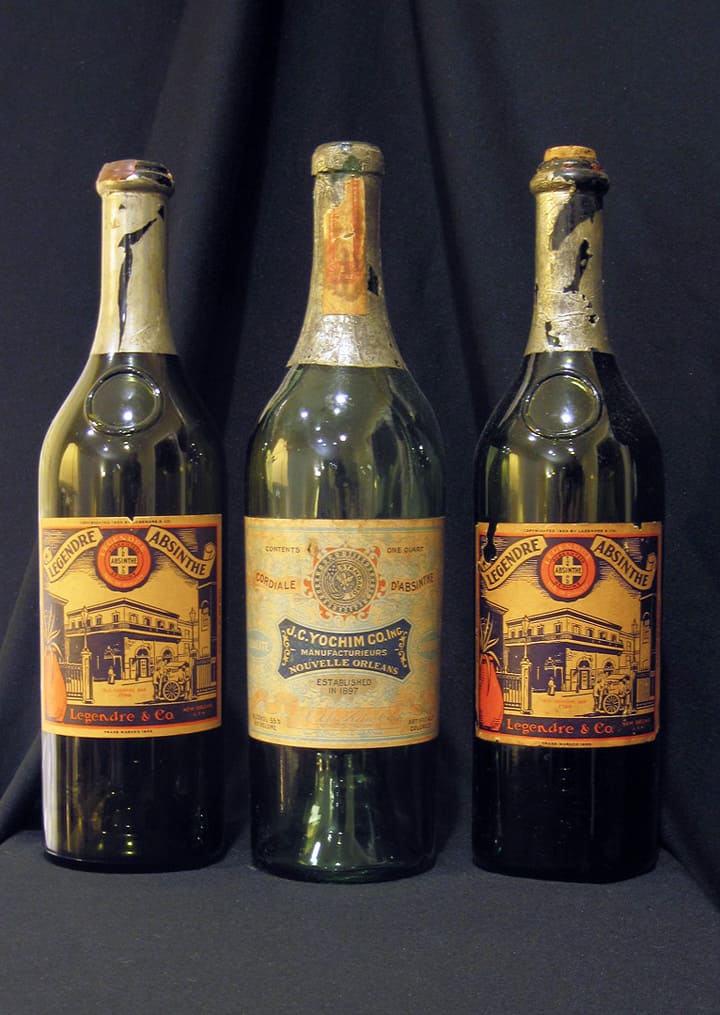 I was curious if you have any other L.E. Jung / L.E Jung & Wulff items?
I’m researching Jung, and Yochim, and Legendre & Co. in New Orleans. (Have history on all three)

I have a few interesting pre-prohibition L.E. Jung liquor and bitters bottles, though my main focus is on Legendre Absinthe and Legendre Herbsaint, and Legendre’s Drugstore.

I though you might like to see a couple of the bottles I have. (I have a few more)

I’m a Houston person myself. 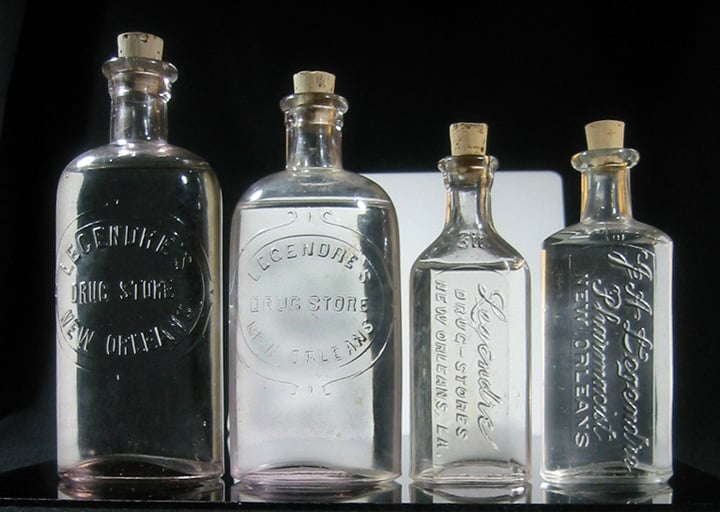 Jay, thanks for the nice email. We are probably crossing paths in certain areas. I found your email and pictures very interesting and wanted to share with the readers. There certainly is a special group of collectors that prize NOLA bottles. I thought I would share a picture of my Yochim Bros Celebrated Stomach Bitters from New Orleans. The label purportedly reads “These bitters are guaranteed to be manufactured from the best herbs obtainable. 1901, New Orleans.”

These bitters are guaranteed to be manufactured from the best herbs obtainable. 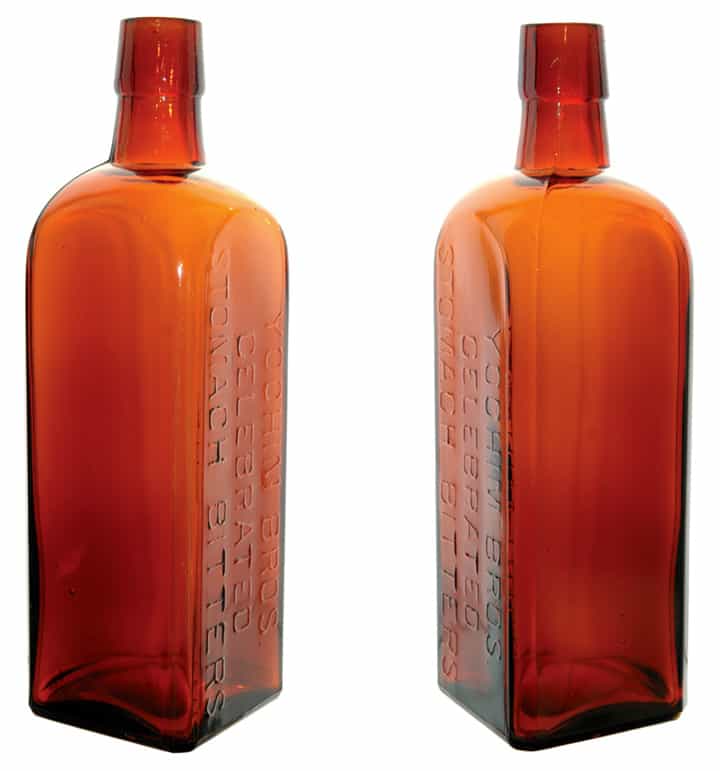 Read more on Peachridge on New Orleans bottles or use the search function for New Orleans at the top of each page. 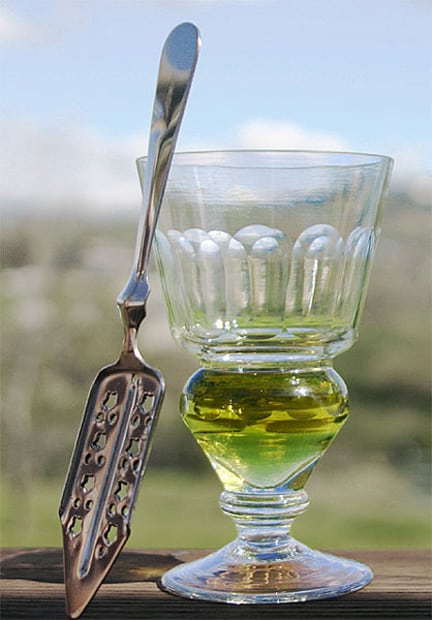 A reservoir glass filled with a naturally coloured verte absinthe, next to an absinthe spoon

Absinthe is historically described as a distilled, highly alcoholic (45–74% ABV / 90-148 proof) beverage. It is an anise-flavoured spirit derived from botanicals, including the flowers and leaves of Artemisia absinthium (a.k.a. “grand wormwood”), together with green anise, sweet fennel, and other medicinal and culinary herbs. Absinthe traditionally has a natural green colour but may also be colourless. It is commonly referred to in historical literature as “la fée verte” (the green fairy). Although it is sometimes mistakenly referred to as a liqueur, absinthe is not traditionally bottled with added sugar, and is therefore classified as a spirit. Absinthe is traditionally bottled at a high level of alcohol by volume, but is normally diluted with water prior to being consumed.

Absinthe originated in the canton of Neuchâtel in Switzerland in the late 18th century. It arose to great popularity as an alcoholic drink in late 19th- and early 20th-century France, particularly among Parisian artists and writers. Owing in part to its association with bohemian culture, the consumption of absinthe was opposed by social conservatives and prohibitionists. Ernest Hemingway, Charles Baudelaire, Paul Verlaine, Arthur Rimbaud, Henri de Toulouse-Lautrec, Amedeo Modigliani, Vincent van Gogh, Oscar Wilde, Aleister Crowley, Erik Satie and Alfred Jarry were all known absinthe drinkers. 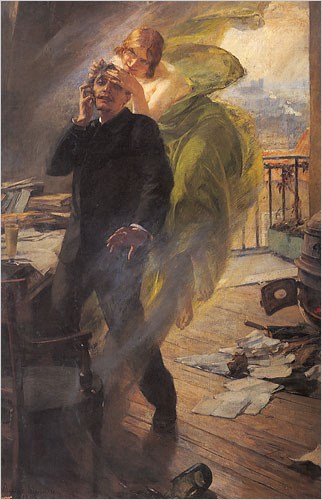 Absinthe has often been portrayed as a dangerously addictive psychoactive drug. The chemical compound thujone, although present in the spirit in only trace amounts, was blamed for its alleged harmful effects. By 1915, absinthe had been banned in the United States and in much of Europe, including France, the Netherlands, Belgium, Switzerland and the Austro-Hungarian Empire. Although absinthe was vilified, it has not been demonstrated to be any more dangerous than ordinary spirits. Any psychoactive properties attributed to absinthe, apart from that of the alcohol, have been much exaggerated. A revival of absinthe began in the 1990s, following the adoption of modern European Union food and beverage laws that removed longstanding barriers to its production and sale. By the early 21st century, nearly 200 brands of absinthe were being produced in a dozen countries, most notably in France, Switzerland, USA, Spain, and the Czech Republic. [Wikipedia]

Ferdinand Meyer V is a native of Baltimore, Maryland and has a BFA in Fine Art and Graphic Design from the Kansas City Art Institute and School of Design. Ferdinand is the founding Principal of FMG Design, a nationally recognized design consultation firm. Ferdinand is a passionate collector of American historical glass specializing in bitters bottles, color runs and related classic figural bottles. He is married to Elizabeth Jane Meyer and lives in Houston, Texas with their daughter and three wonderful grandchildren. The Meyers are also very involved in Quarter Horses, antiques and early United States postage stamps. Ferdinand is the past 6-year President of the Federation of Historical Bottle Collectors and is one of the founding members of the FOHBC Virtual Museum.
View all posts by Ferdinand Meyer V →
This entry was posted in Bitters, Collectors & Collections, Druggist & Drugstore, History, Liquor Merchant, Questions, Spirits and tagged Absinthe, Albert Maignan, anise, bitters, Dr. Hostetter's, green, Green Muse, Herbsaint, Houston, J.C. Yochim, L.E. Jung, Legendre & Co., New Orleans, spirit, wormwood, Wulff, Yochim Brothers. Bookmark the permalink.