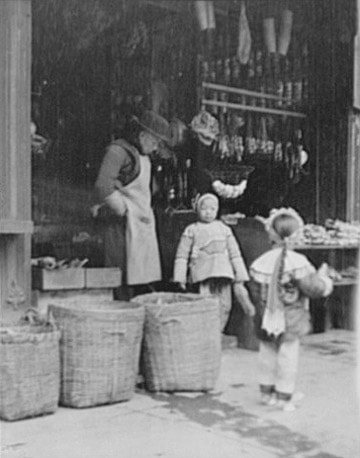 There have been a number of historical photograph galleries this past year on Peachridge Glass such as Colorado Saloons, Ghost Towns, Utah Saloons and Breweries, Drinking Establishments, Apothecary and how we transported the merchandise. If you go to the History Category on the right of each page you will see dozens of similar posts.

We have lost so much of this personality when we have ‘giant-sized’ the shopping experience.

I really enjoy looking at old photographs as they relate to our hobby. The pictures really add character and personality to the pieces of glass and bottles we research and own. Today I was looking at grocery stores researching Liebenthal Brothers in Cleveland and found this great Milk picture. Where else would you find a picture of a Dog Delivering Milk? Look carefully at each picture and see how proud each merchant is in the picture. We have lost so much of this personality when we have ‘giant-sized’ the shopping experience.

It is also really important to know that many wholesale and retail grocers were heavily marketing and selling medicines and bitters products. Many had their names embossed on the bottles and or printed on labels. 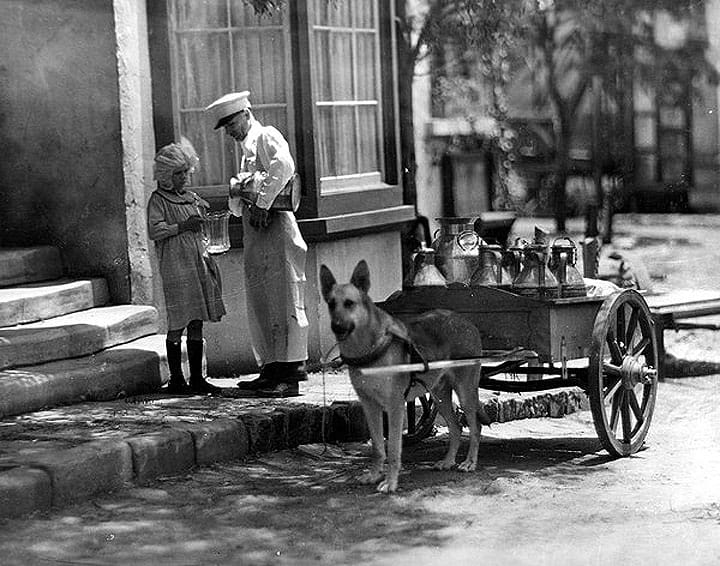 Milk delivery by dog cart, probably around 1910. This was taken at the intersection of Ventura Blvd. and Lankershim Blvd. in San Fernando Valley, California. The milkman is pouring milk into a pitcher.

Grocery stores are descended from trading posts, which sold not only food but clothing, household items, tools, furniture, and other miscellaneous merchandise. These trading posts evolved into larger retail businesses known as general stores. These facilities generally dealt only in “dry” goods such as flour, dry beans, baking soda, and canned foods. Perishable foods were instead obtained from specialty markets: Fresh meat was obtained from a butcher, milk from a local dairy, eggs and vegetables were either produced by families themselves, bartered for with neighbours, or purchased at a farmers’ market or a local green grocer.

Many rural areas still contain general stores that sell goods ranging from cigars to imported napkins. Traditionally, general stores have offered credit to their customers, a system of payment that works on trust rather than modern credit cards. This allowed farm families to buy staples until their harvest could be sold. 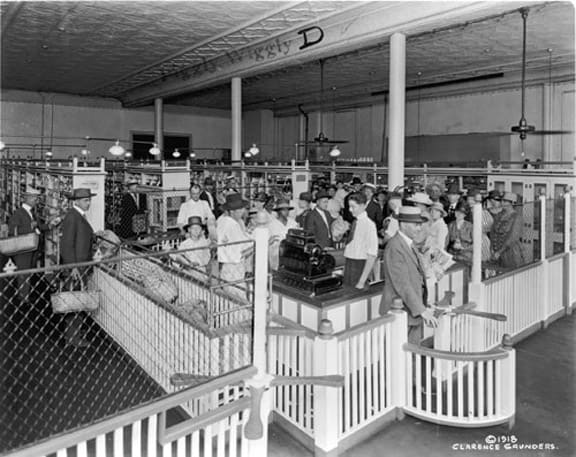 The first self-service grocery store, Piggly Wiggly, was opened in 1916 in Memphis, Tennessee by Clarence Saunders, an inventor and entrepreneur. Prior to this innovation, customers gave orders to clerks to fill. Saunder’s invention allowed a much smaller number of clerks to service the customers, proving successful (according to a 1929 Time magazine) “partly because of its novelty, partly because neat packages and large advertising appropriations have made retail grocery selling almost an automatic procedure.” [Extracted from Wikipedia] 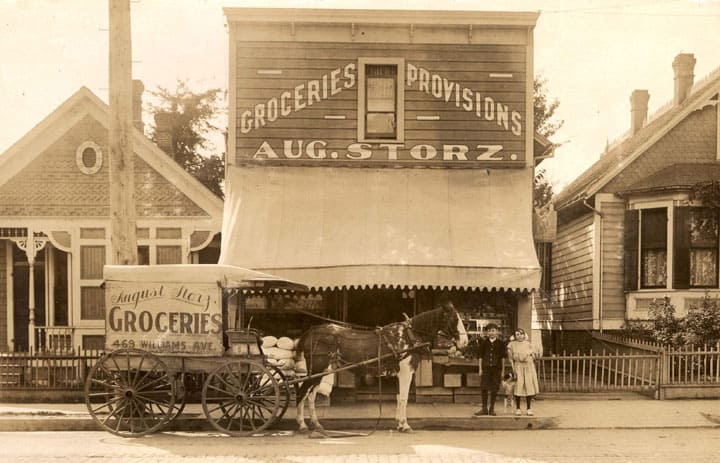 The August Storz grocery store in Portland, Oregon was at 469 N. Williams Avenue in this fine 1910 photograph. Today’s street numbering system puts this at at 2211 N. Williams, at the end of Thompson Street. 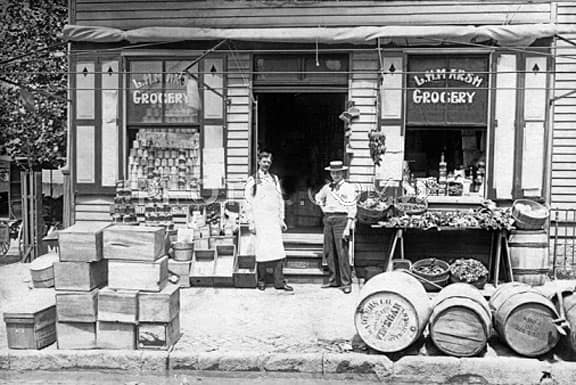 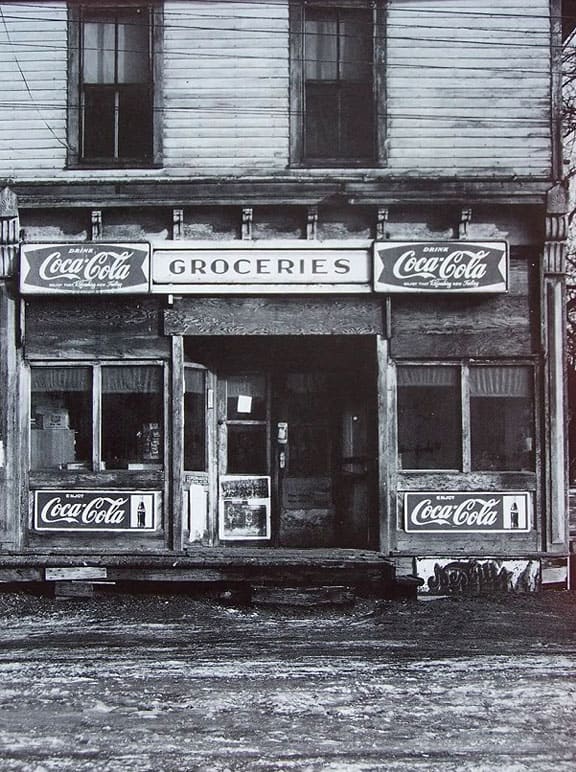 Grocery store with an abundance of Coca-Cola signs 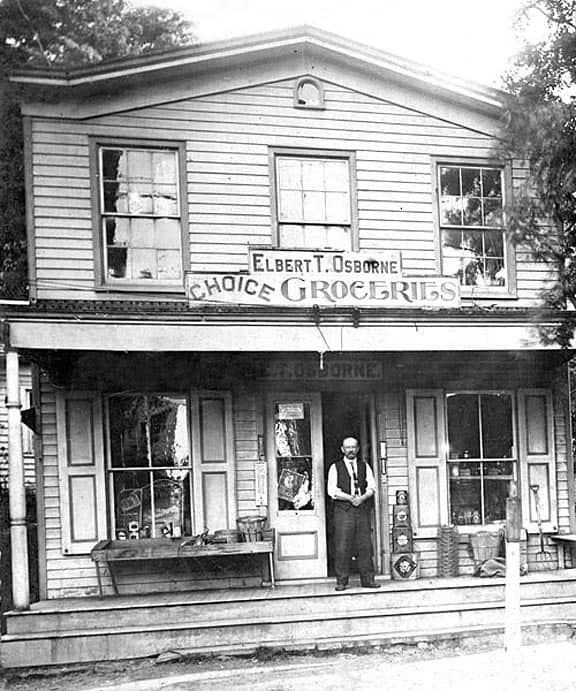 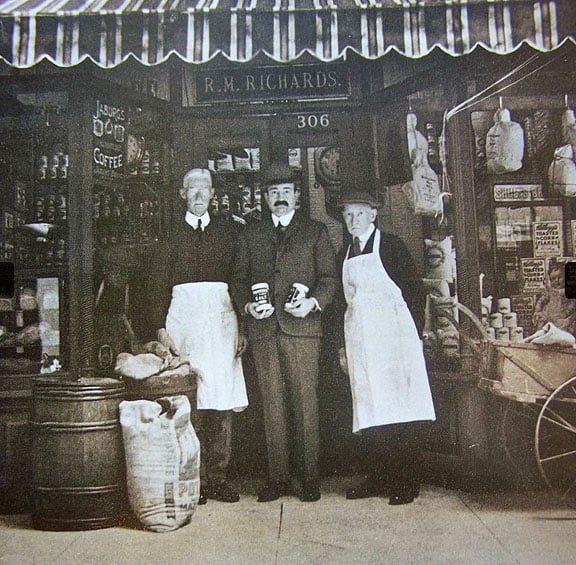 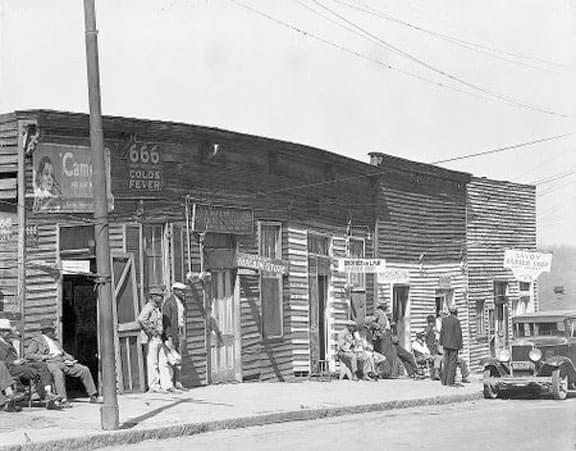 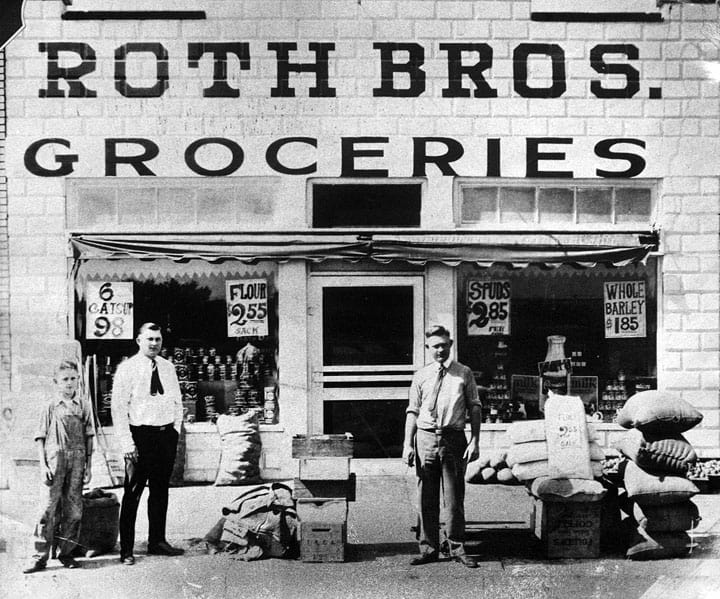 Brothers Fred, second from left, and Henry Roth built their grocery store in 1920 at 723 G St. in Fresno, California. The store was the era’s version of a supermarket 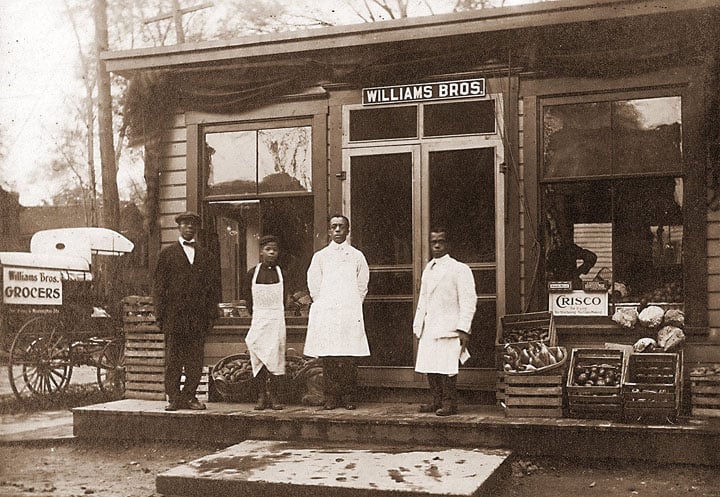 The Williams brothers, Charles, Thomas and George opened the Williams Bros grocery store at Washington and Irving Streets in 1913 in Syracuse, New York. The store stayed opened until 1944. 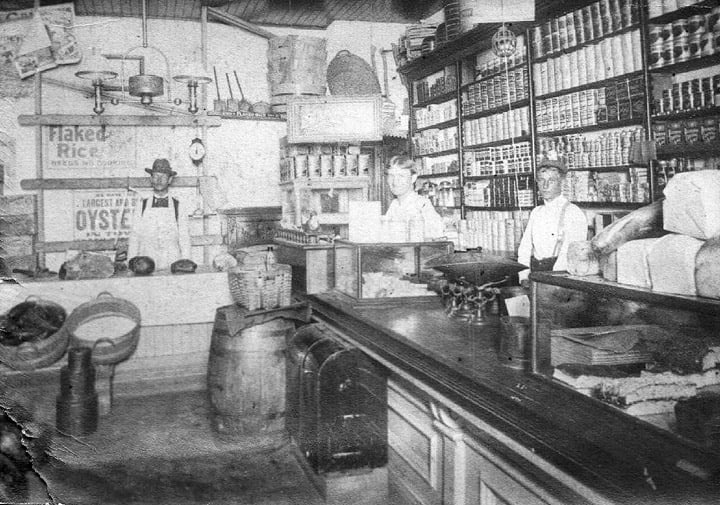 The interior of the Volkert grocery store at 24th and W. Warren, Detroit, Michigan in 1920. The man with the hat by the “oysters” sign is Conrad Volkert. Names of the two “helpers” are not known. 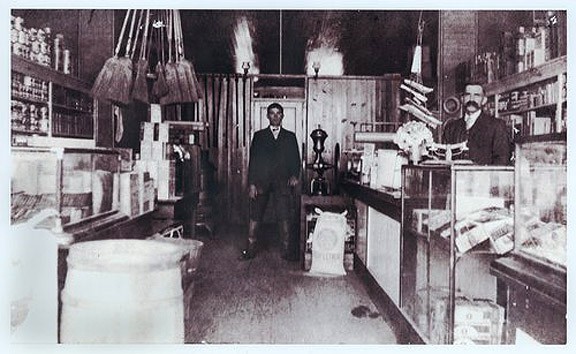 Photograph of the interior of Fisher’s Grocery Store in Kansas. 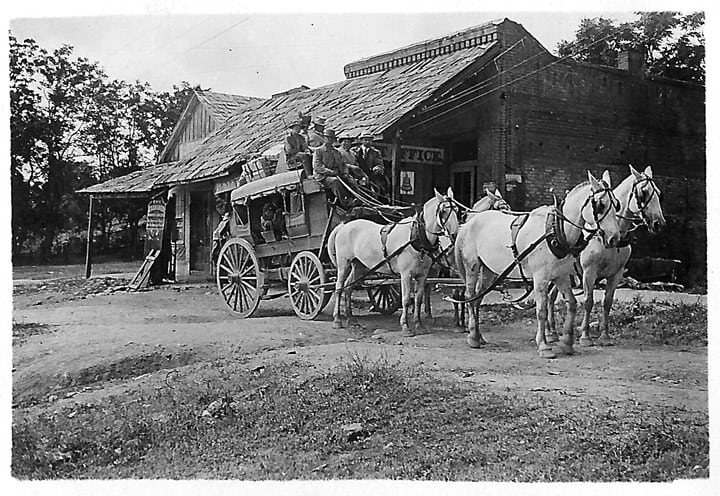 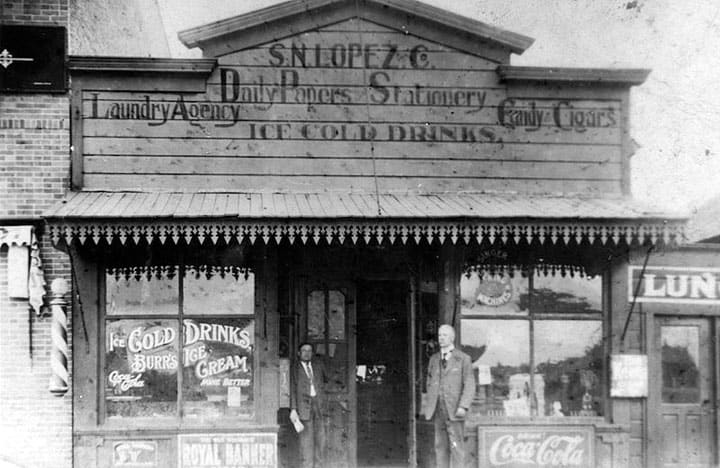 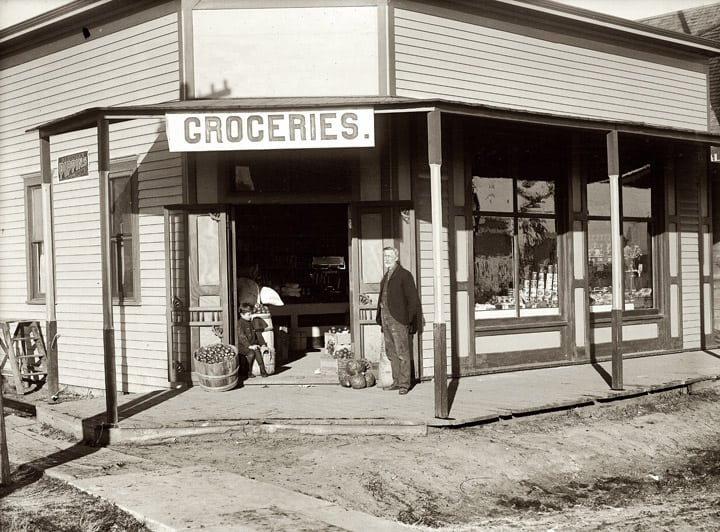 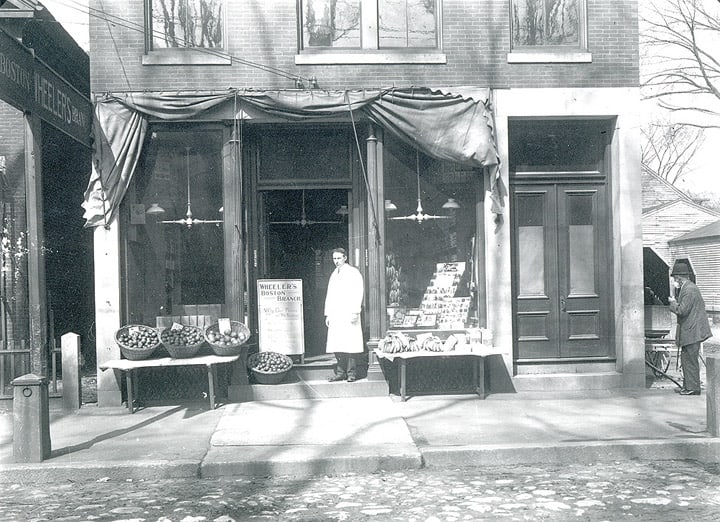 Photograph of Wheeler’s Boston Branch Grocery store at 26 Washington Street in Keene, New Hampshire, with the proprietor. – Keene Public Library and the Historical Society of Cheshire County, circa 1900 – 1920 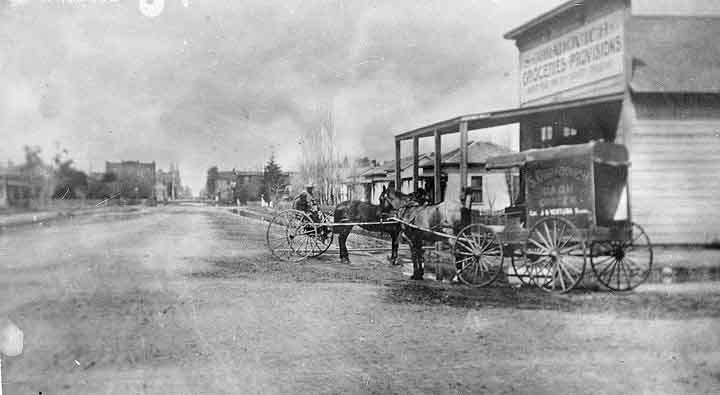 An 1888 photo taken from Ventura Street looks northwest on J Street (now Fulton Street) into the young city of Fresno. The “false front” of Spiro Obradovich’s grocery store, Cash Grocers, mimics the architecture of the era. Obradovich is seen at right, with his wagon in front. 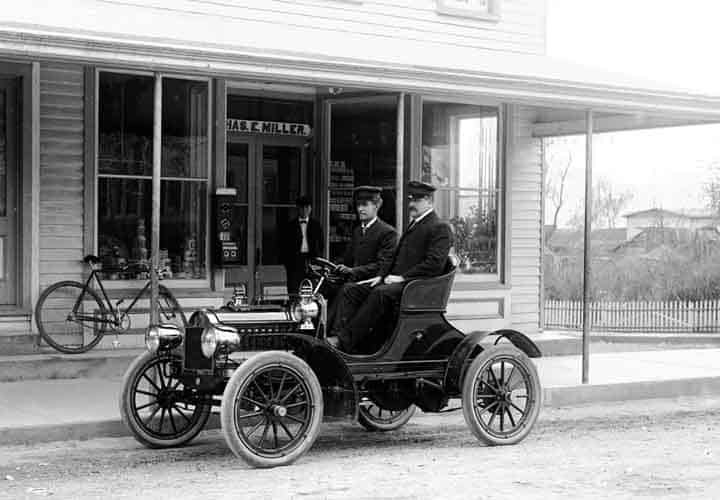 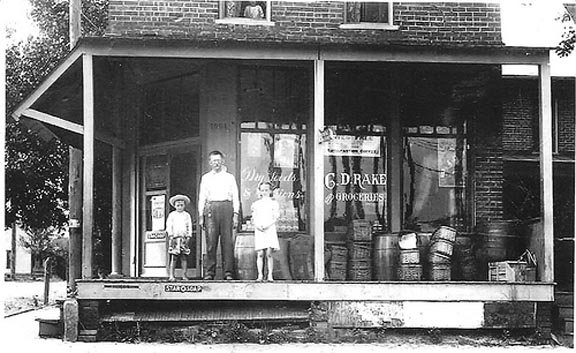 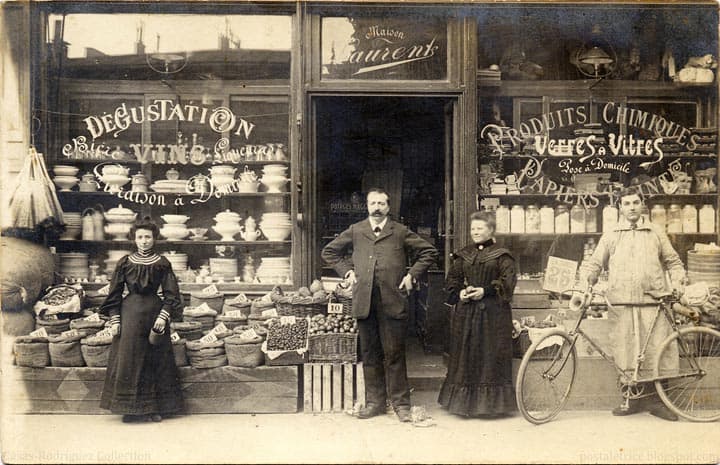 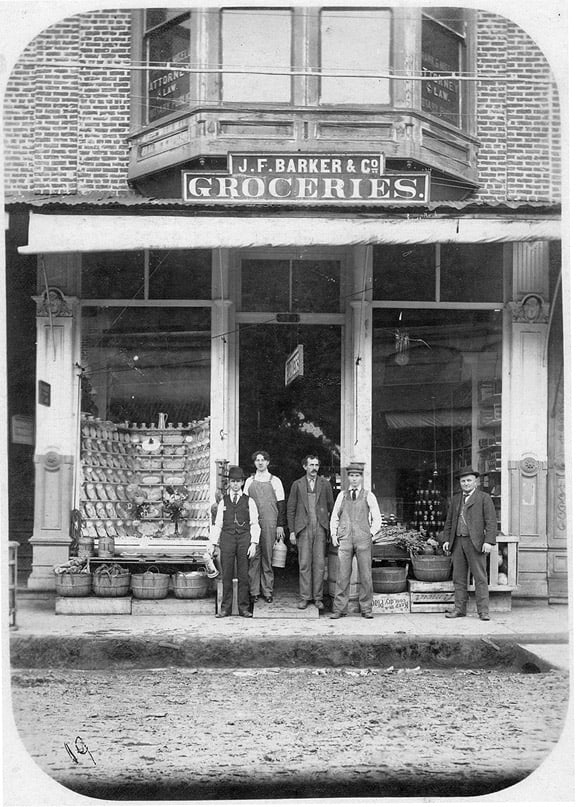 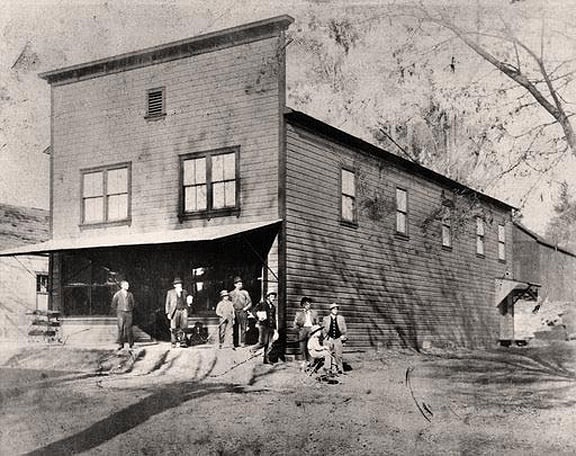 Old Murphy Grocery Store in Yerba Buena, California. Built as the Big Trees Hotel on Big Trees Road in the 1890s, the two-story frame building was moved to its present site in the early 1900s. It was then occupied by Ben and Jim Stephens as a grocery store for many years, and after that by Buster and Rose Riedel’s Murphys Grocery Store until the 1980s.