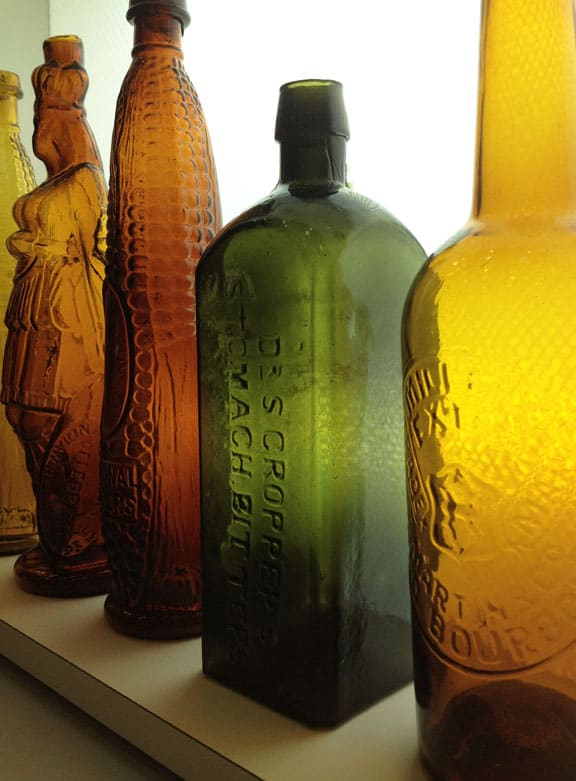 “Example found in a barn in Iowa”

A number a people alerted me to a square, green bitters bottle that they spotted with Jeff Wichmann at the FOHBC Reno Expo in late July. Jeff’s American Bottle Auctions tables were across the big showroom floor, which might have been in Siberia as far as I was concerned. Tough to get away from my zone.

I finally was able to break-away from my table and take a shot or two of this puppy. Bill Ham was all over it and copied me on an email to Jeff (see below). Throughout the show I kept looking for the bottle in the Carlyn Ring and Bill Ham Bitters Bottles and Bitters Bottles Supplement to no avail. Appears to be unlisted. It kept nagging at Bill too, as I think Bill thought this bottle was referenced in his notes somewhere. WOW.

Apparently this bottle will be in Jeff’s next auction (Pictures and information from auction listed below).

When I looked at the bottle in Reno, I thought there was a small embossing tail at he bottlom of the “C” formation area making the first letter a “G”. However, in looking at your picture, it really looks like a “C”. I think you are correct that it is a “C”. The original listing I had drafted had it as a “C”, which was apparently what the diggers believed also. What a fabulous bottle.

The bottle listing would then be (see below):

Thank you for your help with the info on the bottle. Hope your wrist is now mended.

I wish to remain anonymous. I dug this example in St. Louis out of a 1845-1860 era privy. Not pontiled but dates to the early 1860s. Closely resembles an early black glass Hostetter’s. I did a little research and it appears it could be from Cincinnati but that is just a guess. There was a Dr.Charles Cropper listed in 1866. This is the only Cropper I could find listed anywhere that had anything to do with medicine. I have a gut instinct that this bitters is from the Mississippi River valley area, probably St. Louis. Thanks…xxx 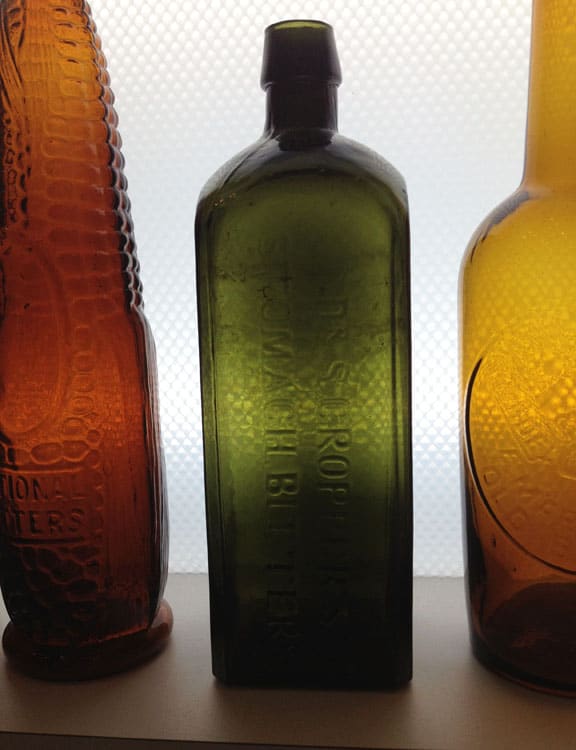 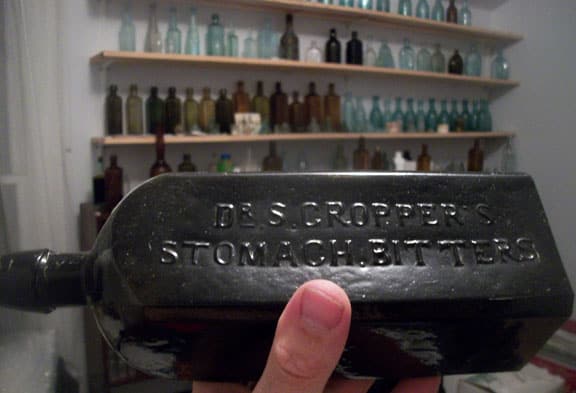 Dr. S. CROPPER’S STOMACH BITTERS. 9 5/8″. Here’s a bottle we picked up at the Reno Expo and are we glad we did. We spoke with bitters expert and author Bill Ham at the show and after examining the bottle concluded that is not only in his original book, but it doesn’t appear in his first supplement nor his soon to be published second supplement, although it will now. The bottle itself is a medium green with some lime thrown in. It’s very crude and although it’s not pontiled we agreed it’s probably a product of the 1860’s. We at first thought the name was Cropper but from the two only possible shard sightings of the bottle, it was reported as Gropper. We spelled it with a G in the catalog but it looks like a “C,” walks like a “C,” and quacks like a “C” so we’ve concluded that without a doubt it’s a “C.”. According to Bill, one shard was found in Peoria, Ill. and another found in St. Lous, MO. What a looker this one is, it has just about everything a collector is looking for; crudity, color and rarity. It is probably no mistake that the bottle resembles an early and obviously at the time a more popular Hostetter’s Bitters. Although it is a little taller. The condition is beautiful with just a minor scratch or typical very light usage wear. It was found in Iowa along with a Lediard’s Bitters according to the consignor. It’s not often we get the opportunity to offer such a beautiful and rare bottle but here it is. There was some interior haze at one level of the bottle and is prety much gone after a light washing with soap and water. Grades a 9.7, here’s one you don’t want to miss. Est. $3,000-6,000. 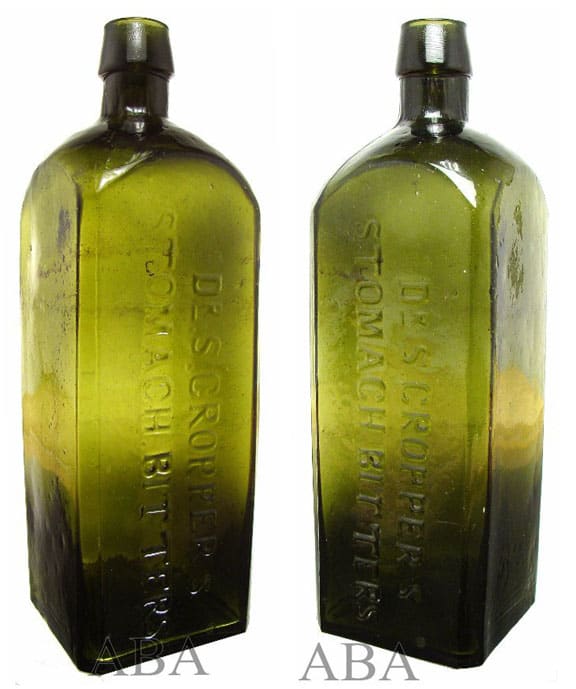 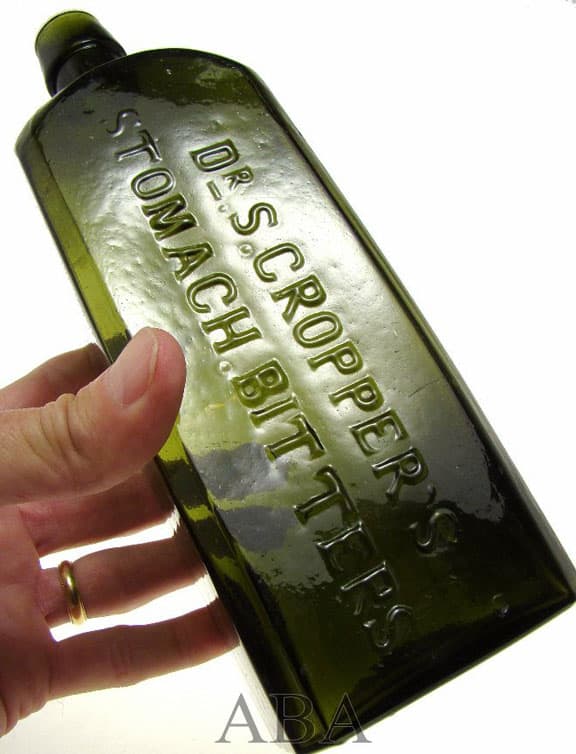 Ferdinand Meyer V is a native of Baltimore, Maryland and has a BFA in Fine Art and Graphic Design from the Kansas City Art Institute and School of Design. Ferdinand is the founding Principal of FMG Design, a nationally recognized design consultation firm. Ferdinand is a passionate collector of American historical glass specializing in bitters bottles, color runs and related classic figural bottles. He is married to Elizabeth Jane Meyer and lives in Houston, Texas with their daughter and three wonderful grandchildren. The Meyers are also very involved in Quarter Horses, antiques and early United States postage stamps. Ferdinand is the past 6-year President of the Federation of Historical Bottle Collectors and is one of the founding members of the FOHBC Virtual Museum.
View all posts by Ferdinand Meyer V →
This entry was posted in Auction News, Bitters, Bottle Shows, Digging and Finding, FOHBC News, Questions and tagged American Bottle Auctions, barn, Bill Ham, bitters, Bottle, Carlyn Ring, Dr. Cropper's, Iowa, Jeff Wichmann, Stomach, unlisted. Bookmark the permalink.