Toppin’ it off with a few Glasshouse Hat Whimsies 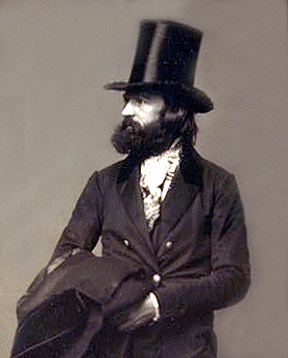 There has been some interesting dialog over at Early American Glass on facebook prompted by a posting by Jeff Noordsy (visit Jeff and Holly Noordsy) of a rather nice Hat Whimsey (see green example that Jeff picked up at the Coventry show below).

I thought that it was high time that I look into this area a little deeper as I have always admired these gracious and sensual pieces of glass. It is also interesting to see how the glass hat whimsey has progressed through different periods of time. Seeing later Hobnail, Carnival, Windmill, Fostoria, Fenton and Murano pieces is really interesting.

The American hat is a fashion icon that may not ever have the prominence and stature it once had with men. Now it might be baseball caps though I do see a fresh fashion move with the generally hip crowd wearing hats but I think this is a momentary fad.

Glass House Whimsies are non-production glass items made by the glass workers on their own time, possibly for their own use and enjoyment, or to demonstrate their ability with glass, or as a special presentation item. 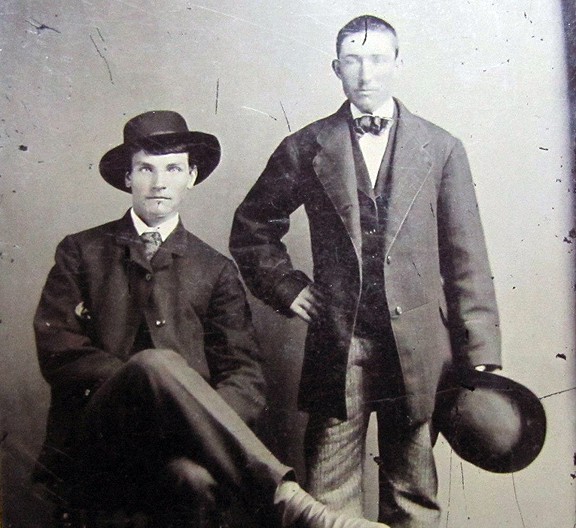 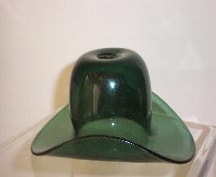 [The Whimsy Club] Glass House Whimsies are non-production glass items made by the glass workers on their own time, possibly for their own use and enjoyment, or to demonstrate their ability with glass, or as a special presentation item.

Glass House Whimsies are often referred to as “End-of-Day” items. This terminology implies that the items have various colors because they were made with the scraps of glass left over at the end of the work day. It also implies that the item was made after the regular work day production was complete. Although this may be partly true, the glass used for making Whimsies was generally not an inferior glass and some items may have been made on the lunch hour. Whimsies were also made at the cut glass factories.

WHAT ARE GLASSHOUSE WHIMSIES? 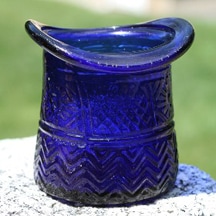 These whimsical items the glass blowers made on their own time included canes, chain, hats, sock darners, doorstop turtles, bellows bottles, bells, witch balls, banks, powder horns, pipes, rolling pins, horns, and many more items. In fact, there are additional items coming to our attention every year. These include witch wands, gavels, screw drivers, pistols, and swords. Some of these whimsies may be made of clear or aqua glass. Others may be of a single color like amber or cobalt blue, while others may have many colors.

The many whimsies of aqua color (canes, witch balls, chain, etc.) were probably products of a window glass or bottle factory. Bottle glass was usually aqua due to the natural iron in the sand, which discolored the glass. Window glass may have been chemically treated to produce a somewhat clearer glass. Seldom was green, amber, cobalt blue or ruby red available to the workers of these bottle and window glass factories. The more colorful whimsey items may have originated in larger glass works which had many pots and possibly several colors available at one time. Glasshouse whimsies are referred to as Friggers in England and as End-of-Day in other areas.

Glass workers did not have time to amuse themselves with their creations during working hours. Pay scales were equated to the volume of the product or numbers of piece work. At some glass houses there were terms like “Turn” which meant you worked a certain length of time, which may have been four hours. During that “Turn” the shop had to produce a “Move” which equaled a certain number of items. The number of items for a “Move” was derived through negotiations between the union and the company. Workers working together enabled a shop to produce a “Move” in a “Turn”, thus preventing any work on personal creations, other than at lunch time or at the “End-of-Day”.

Glass workers had a difficult life, with the heat, the smoky, dusty, air and the pressure to complete a “Move” to make the maximum wage. The opportunity to make a useful item for home or just an attractive item for pleasure was one of the few benefits that had the owner’s consent. Even though the glass workers had unions, they were not able to acquire many benefits because the owners would stop production and close before giving in to union demands. This happened at Sandwich Glass Works in 1888.

A major problem the workers faced when they made a whimsey, was preventing someone else from taking it. The item had to be cooled in the lehr overnight, and whoever was first to get to work the next morning had the opportunity to grab the whimsey if he was so inclined. Some workers just expected their whimsies to disappear and were surprised when it was still there for them to have.

There are some types of whimsies being made today. Are these reproductions or just the present day workers demonstrating their ability with glass? What classifies a glasshouse whimsey as being reproduced? When does the apparent time period of “originals” cease and the time period of “reproductions” begin? All glasshouse whimsies are one-of-a-kind and therefore should be judged on their own individual quality and beauty and not necessarily on their age. This is especially important with glass, because it is very difficult to judge the age of a piece of glass.

Read More: Boys in Glass Houses – Taking on the Mannerisms of Men

A few pictures from a range of sources and time periods. 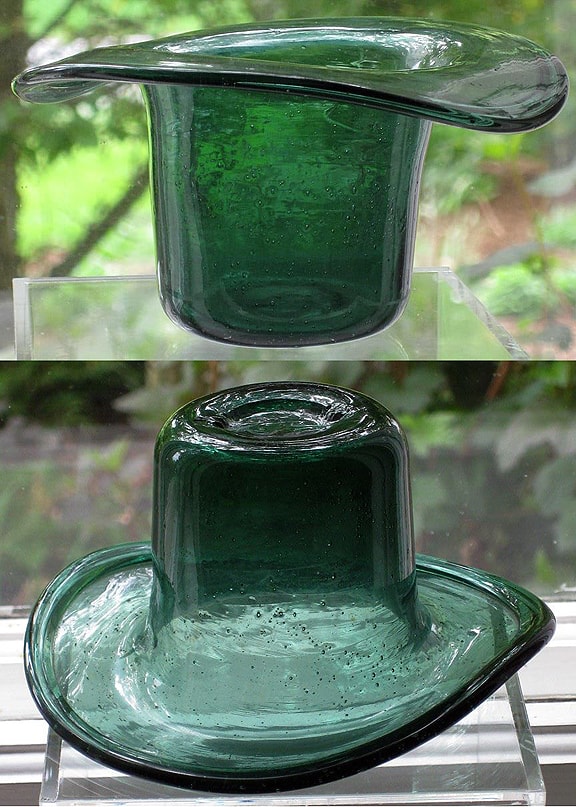 “Picked up this handsome hat at the Coventry Show this past weekend. My strong sense is that it is New York State and likely a Congressville made piece” – Jeff Noordsy (A later post on facebook after receiving a variety of comments: “Am I allowed to change my mind? Spent some time with this today and it’s more delicate than I would think of Congressville. You folks who guessed “Willington” are probably on a better track”) 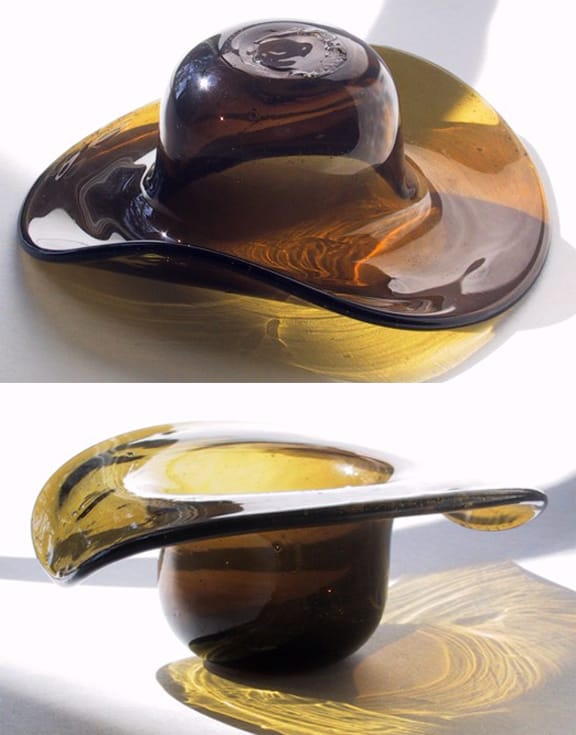 Freeblown Hat Whimsey, golden olive amber, tubular pontil scar, 1 5/8″H x 4 1/8″ across the brim, tooled rim, mint. New England, probably blown at a Stoddard, NH Glass House, C. 1850. Although it is not heavily worn, this freeblown hat is DEFINITELY period and almost assuredly Stoddard or Keene, NH in origin. Hats of this general size, shape and construction are typical of Stoddard’s output, although they are a scarce item and nearly impossible to locate in the current market – Jeff and Holly Noordsy 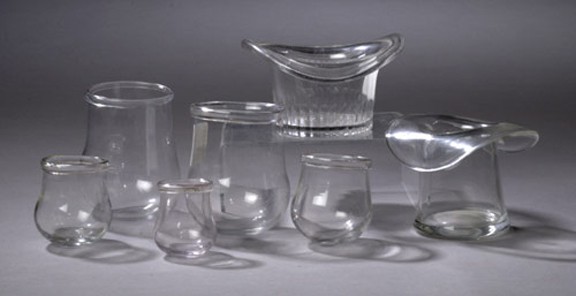 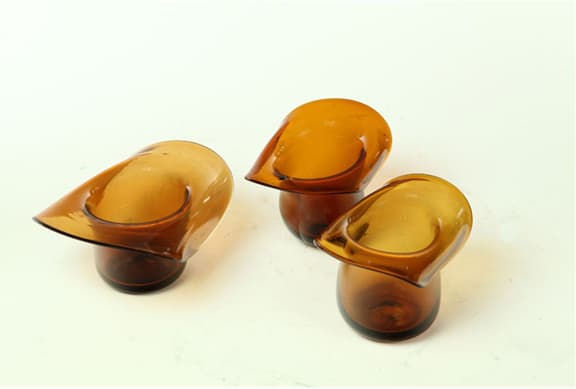 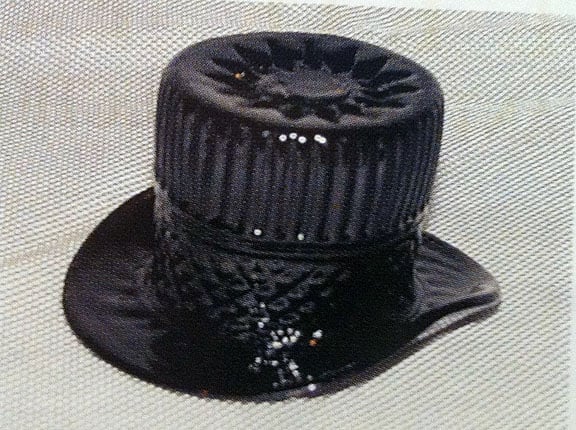 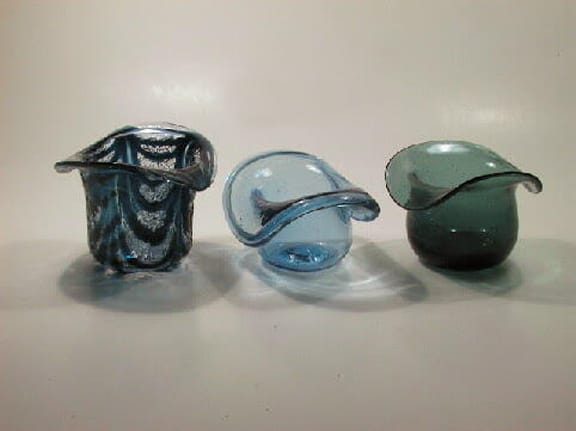 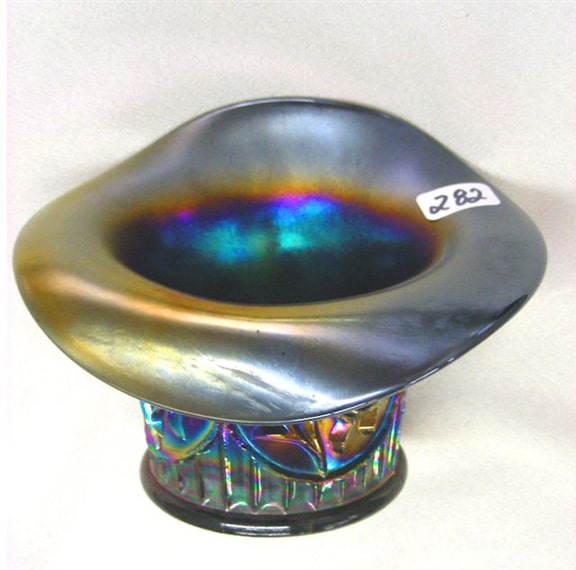 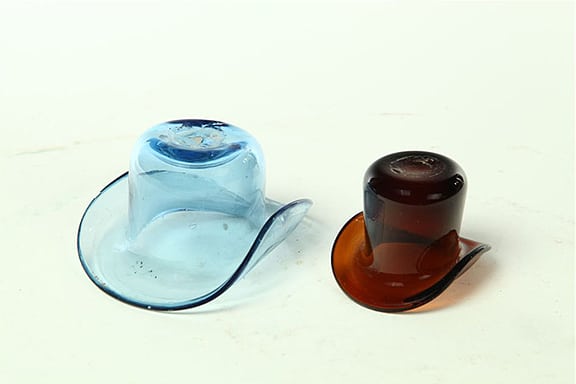 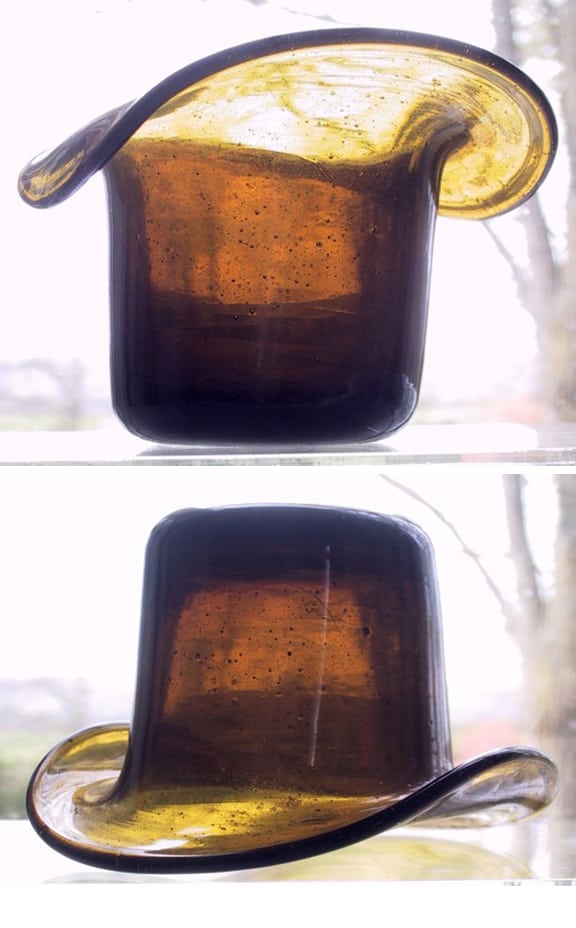 Freeblown Hat Whimsey, golden olive amber, tubular pontil scar, 2 ¼”H and 3 5/8″ at widest point, tooled rim, mint. New England, almost certainly blown at a Stoddard, NH Glass House, 1842-1860, ex. Lyman and Sally Lane, ex. Woody Douglas. This exact hat is pictured as #5 in the top row of plate 2 in the book “A Rare Collection of Keene and Stoddard Glass.” We have owned and treasured this hat for roughly five years, having acquired the piece from Woody Douglas. It remains the best example of a Stoddard hat we have seen. – Jeff and Holly Noordsy 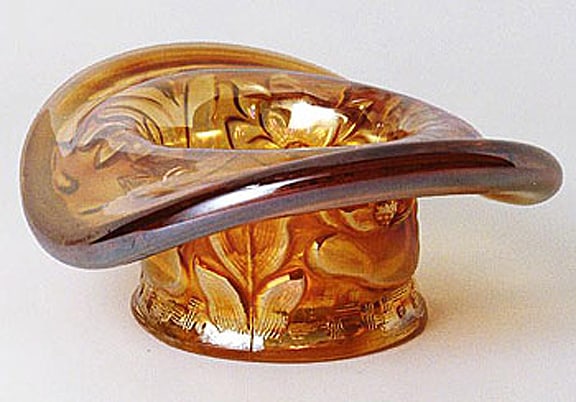 Whimsied from a Fenton Waterlily and Cattails marigold tumbler, this unusually shaped piece is one of just a couple known. – David Doty’s Carnival Glass 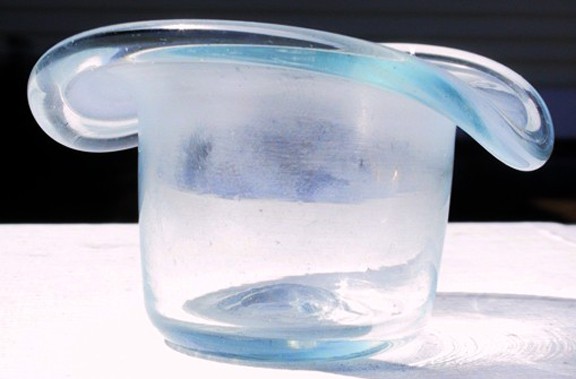 Miniature Hat Whimsey, aquamarine, pontil scar, 1 5/8″H, folded rim, a mint hat with some exterior “bloom” that resulted from the manufacturing process. American, probably blown at a South Jersey Glass House, C. 1850. This truly “miniature” hat is the smallest example I can recall seeing with a neatly folded rim. – Jeff and Holly Noordsy 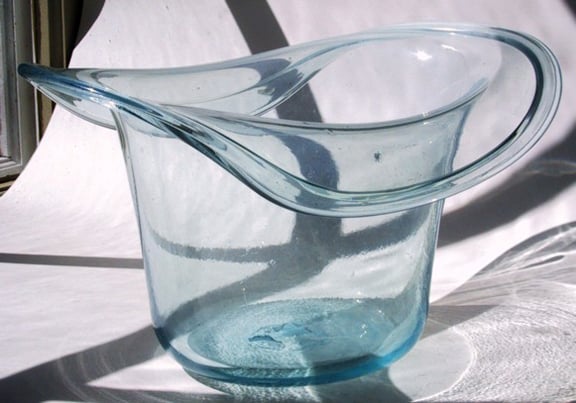 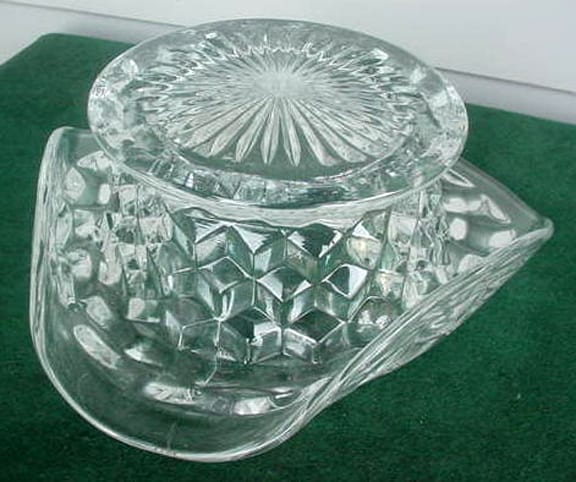 American Fostoria 10″ Whimsey Hat. Due to it’s size, could possibly be a one of a kind piece. Piece was acquired from an estate from the Moundsville, W.Va area, once home of the Fostoria Glass Co. Whimsey was probably made by a former Fostoria employee on his spare time. Not certain what mold this Hat could have been formed out of but I’m guessing either the Sweetpea Vase or one of the Centerpiece’s. Across the top at it’s widest point, Topper (Cowboy) Hat measures 10″ and across underside of the base it measures 6 1/4″. – eBay 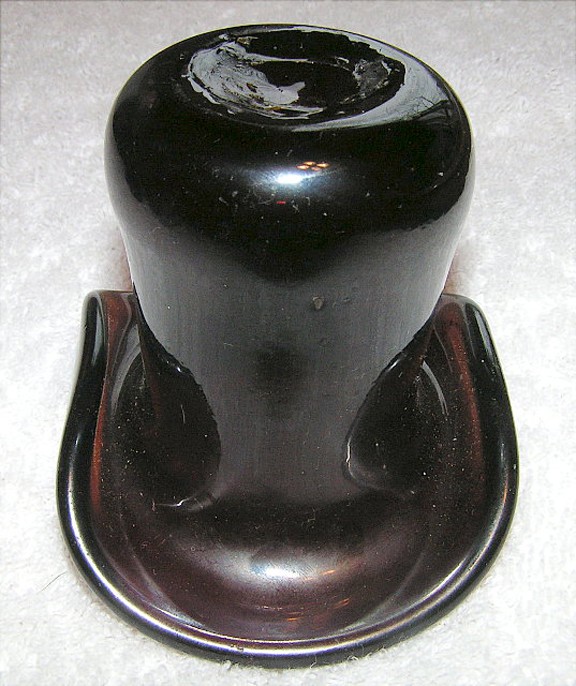 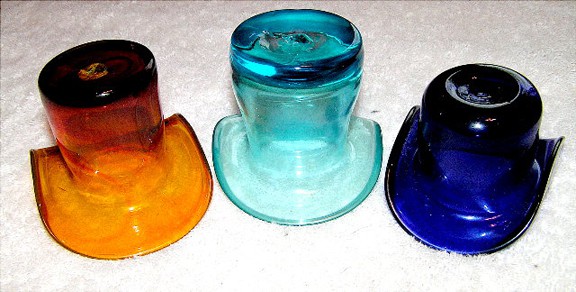 An assortment of free-blown hats. All of them have some age to them but I really can not say where they are from. Old cobalt hats are hard to find – Jim Davies 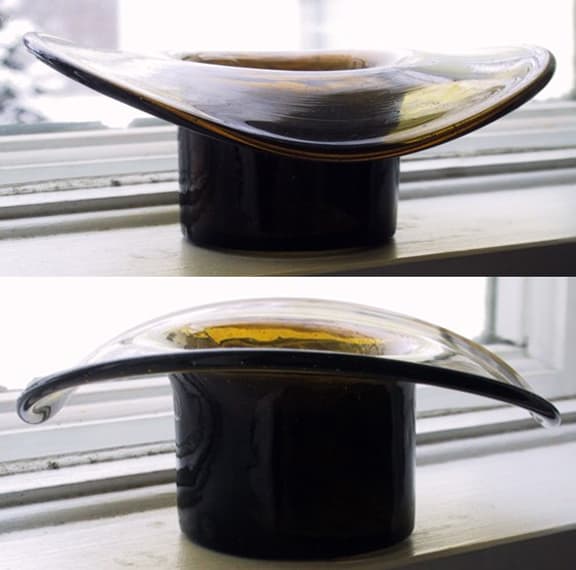 Hat Whimsey, golden olive amber, two-piece mold cylinder with manipulated wide brim, pontil scar, 1 3/8″H x 3 ½” at widest point, mint. New England, probably blown at a Stoddard Glass House, Stoddard, NH, C. 1850. Of the few utility bottle hats we have offered over the years this is unquestionably my favorite. Hats of this type are quite rare and the extra wide brim on this example truly makes it “unique.”. Jeff and Holly Noordsy 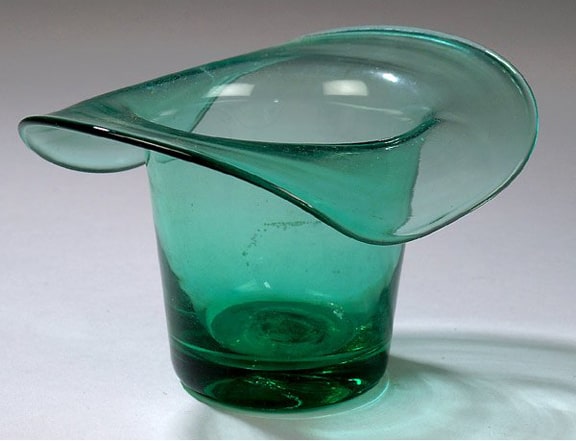 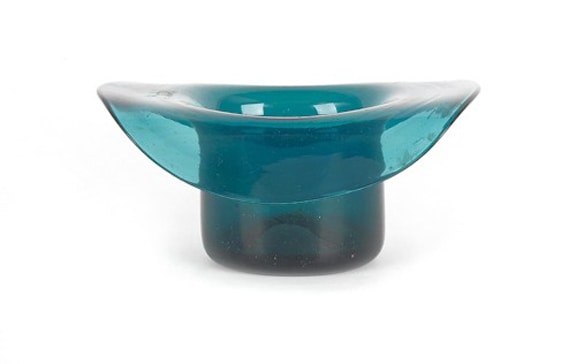 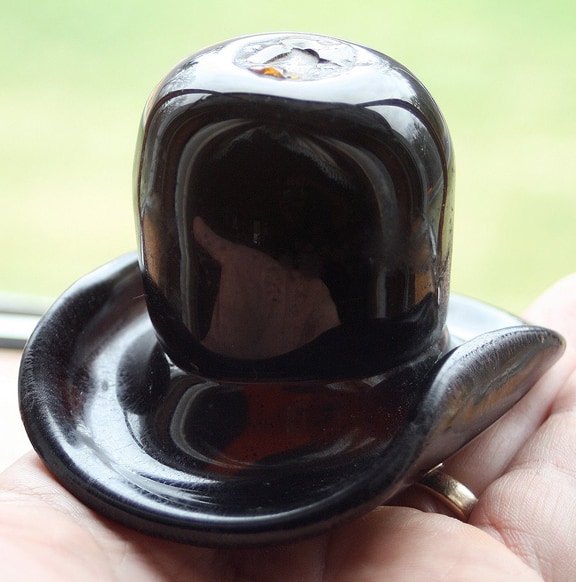 Here is an early bowler’s hat, acquired from an old time collector in CT who acquired it from Gardner. I have since located it in Wilson’s book, fig. 94. One thing that is real neat about it is that it looks like it was German half post, or double-dipped… maybe to give it the bulbous form? – Michael George 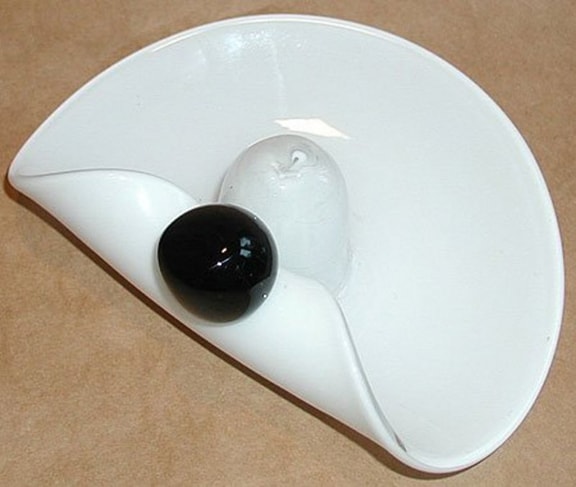 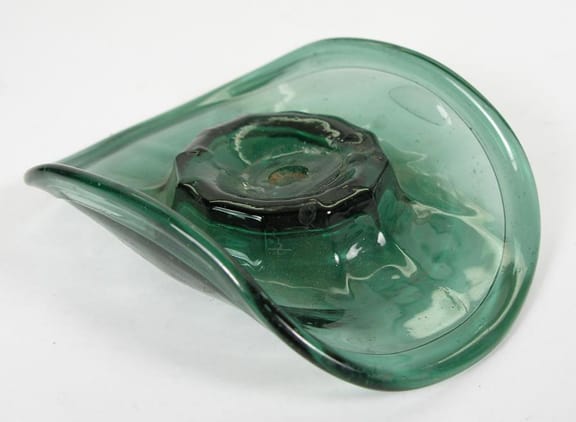 Here is the hat made from the 12 sided bottle. This one belongs to the New Hampshire Historical Society. Great rarity! – Michael George 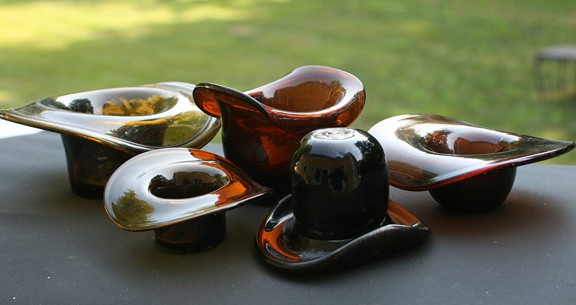 Hats off to ya fellas! – Michael George 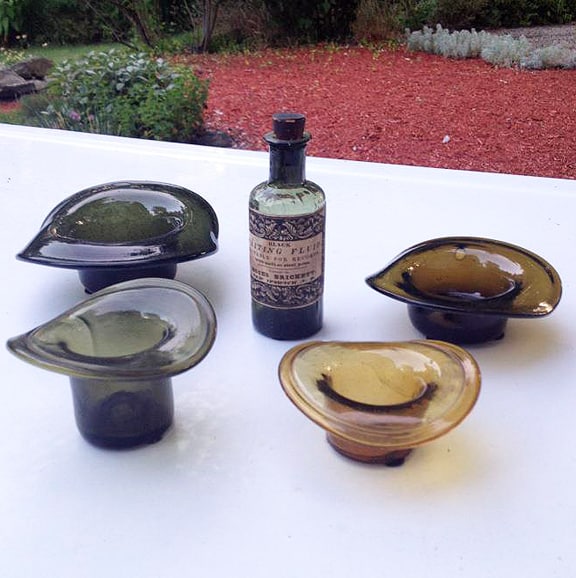 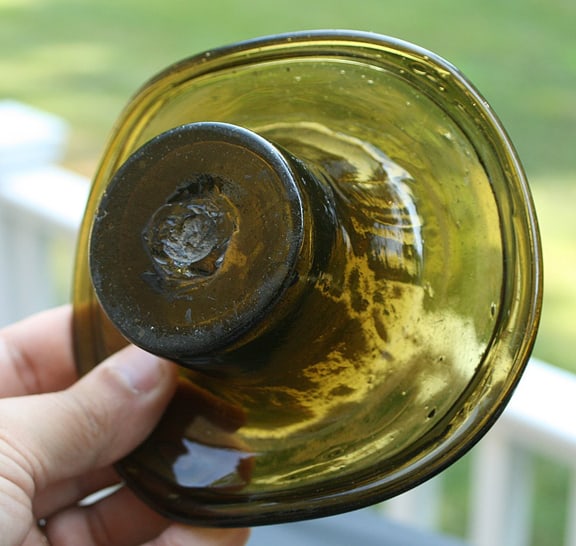