In this post I would like to explore the commonalities between the beautiful coloration and faceting of blue Sapphire gems, the S. S. SMITH JR & CO. figural, rectangular semi-cabin (that probably contained a bitters, whiskey or rye) from Cincinnati, Ohio and Bombay Sapphire Gin (my preferred Gin).

The chamfered bottle design of the S. S. Smith certainly reminds me of the gem we are familiar with and the Bombay Gin bottle. Sapphire is a color that responds well to light and can refract lighter and darker tones that are gorgeous. Who wouldn’t want to pick this bottle off the shelf of a merchant in 1870 or so. I know I can usually spot this color and brand in a field of many behind a bartender now. 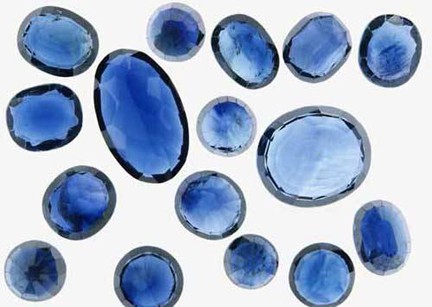 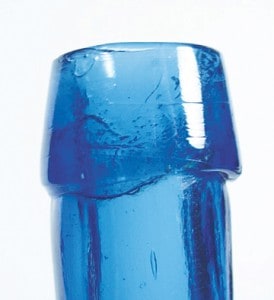 Blue is by far the most popular color for sapphires, but they can be almost any color, including yellow, green, white, colorless, pink, orange, brown, and purple. Padparadscha is the name for a rare orange-pink variety of sapphire and has a higher value than blue sapphires. 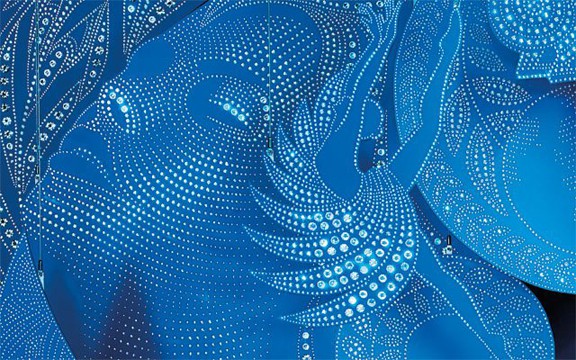 In the Glass Works Auction 94 this past March 2012 (Ides of March Auction) (see picture below) one of these S.S. Smith gems showed up. An example has not made an appearance for years. These are really tough to come by. I purchased my example in 2006 (see pictures below) in a private transaction from an East Coast dealer and auctioneer. I wish I had more information on the bottle such as a label or advertising but alas, I can not find a thing. [Updated with amber information below] Hopefully this post will ferret out some more information from my collector friends. 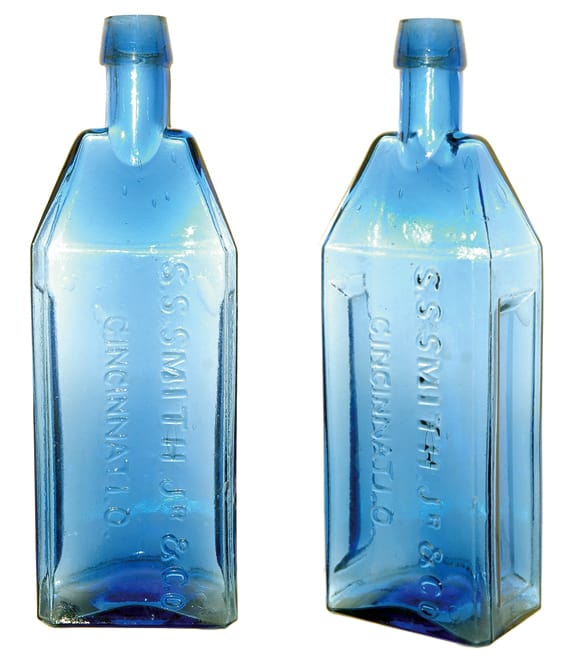 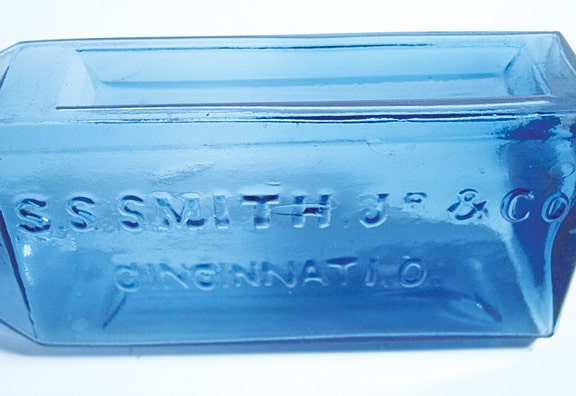 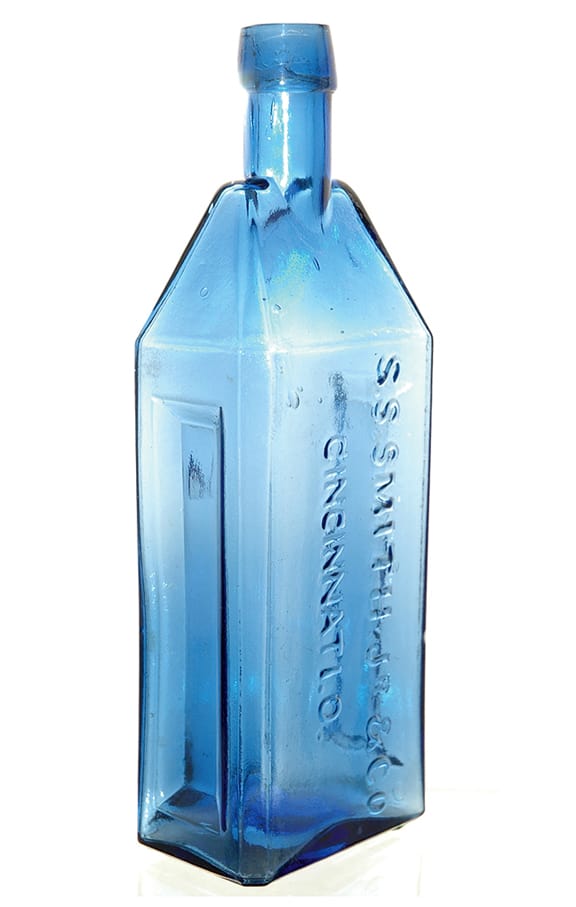 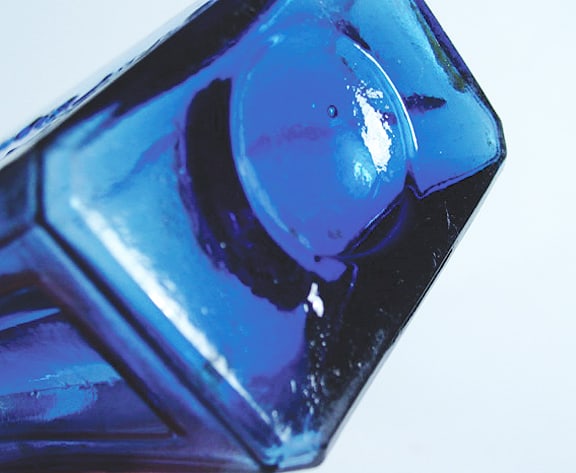 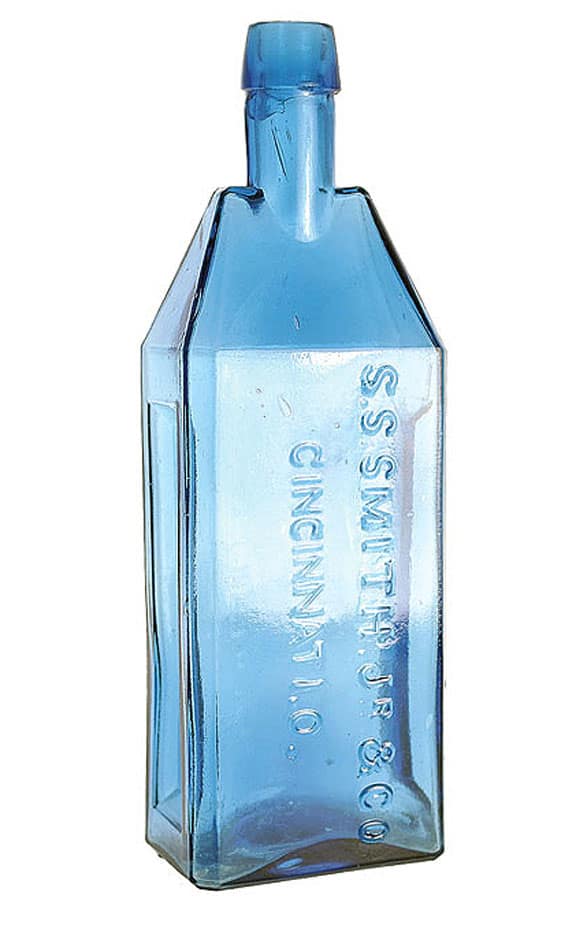 This example sold for $4,312.50 including auction house premium. Most examples have sold historically (I have seen two or three including my own) for around $6,500 meaning someone really got a deal. 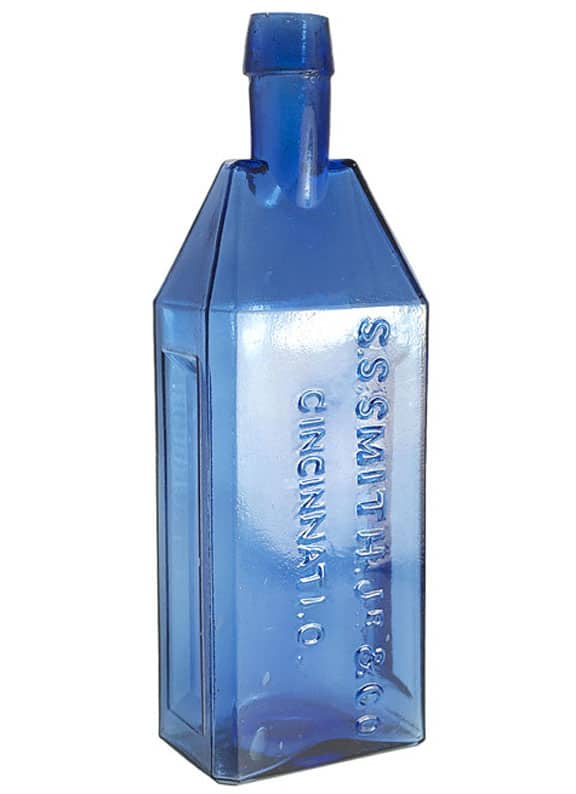 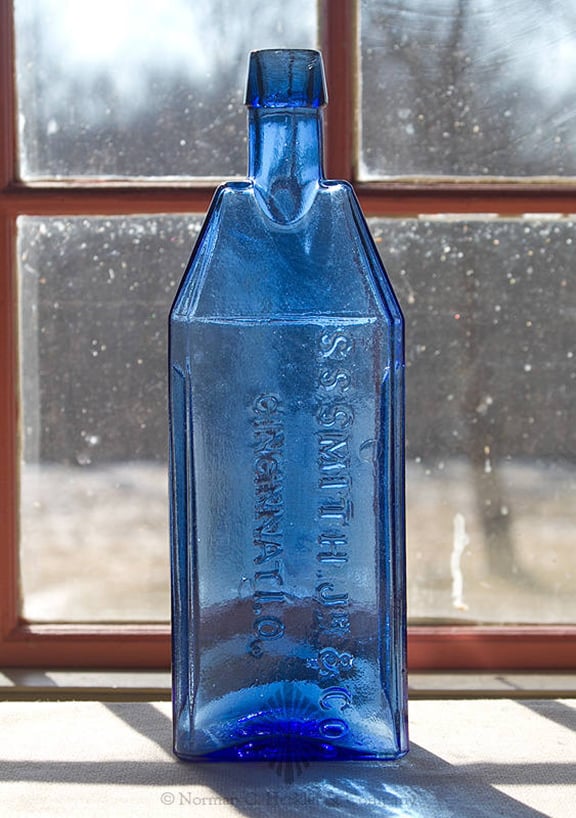 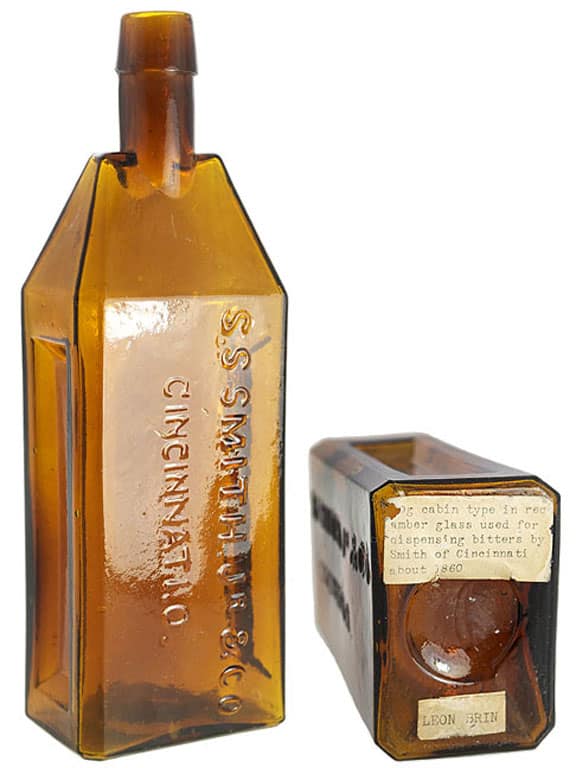 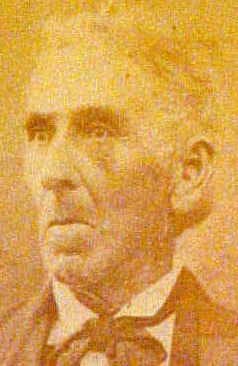 Samuel Sherwood Smith was born on August 30, 1803 in Solon, Cortland County, New York. He was the son of Levi Smith and Hannah Holland and one of 11 boys from the couple. One newspaper article said he was the smallest, but lived the longest. He certainly accomplished a great deal in his life. He was married first to Margery (?) Smith in 1826 and then Elizabeth Andress Smith in 1832. Two of his children, S. S. Smith Jr. and Edwin Forrest Smith would eventually join him in the liquor business.

By 1820, Samuel Smith is found residing in Cincinnati, Ohio. U.S. Federal Census records do not list an occupation each decade until 1860 where he is listed as a merchant. I suspect Smith was a liquor dealer or some type of general merchant many of those years. That same 1860 federal record is missing S.S. Smith, Jr. who would have been 26 years old or so at the time. Edwin F. Smith was 18 years old at the time.

An article in the January 1995 edition of Antique Bottle & Glass Collector magazine. mentions that the Booth family, part of an acting group, visited the Smith family in 1848 on an acting tour. Sol Smith, one of Samuels brothers, was an actor. John Wilkes Booth, then ten years old, was there, as well as the ten year old S.S. Smith Jr.

In 1862, we see the first listing of S.S. Smith & Company comprising of Samuel S. Smith and his son S.S. Smith, Jr. They are selling liquors at 56 West 2nd Street in Cincinnati. By 1869, it is S.S. Smith, Jr. & Company, Liquors located at No. 34 E. 2nd Street. They were dealers in fine bourbon and rye whiskeys. His partners were his sons Samuel and Edwin and Benjamin Ehrmen who had married his daughter Louise. Samuel Smith Sr. had moved on from the business by then and was now the president of a life insurance company.

In 1871, the following newspaper advertisement (below) appears in The Cincinnati Enquirer for S. S. Smith Jr., & Co. (S. S. Smith Jr., Edwin F. Smith and Benj. F. Ehrman) selling Wholesale Liquors at 58 W. Second Street in Cincinnati. Notice the “Proprietors of the Celebrated Morning Call Bitters.” Could this be the product in the bottle? Actually, I do believe this. This semi-cabin bottle shape now also found in amber, is basically the same form as many other bitters. Whiskey, rye and other spirits were typically bottled in round cylinder bottles. The only thing that casts doubt on this idea is another Morning Call Bitters being sold in Cincinnati around the same time period. 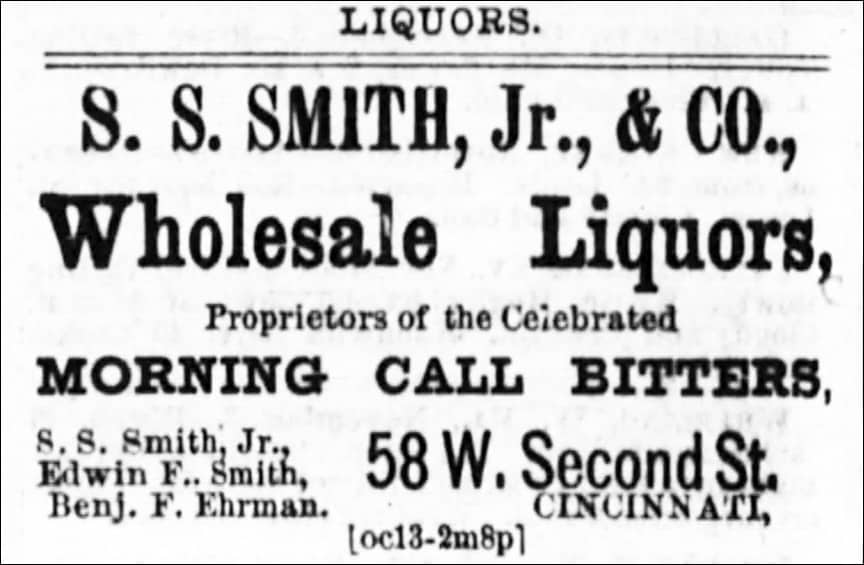 1848: Article in the January 1995 edition of Antique Bottle & Glass Collector magazine. The article mentions that the Booth family, part of an acting group, visited the Smith family in 1848 on an acting tour. John Wilkes Booth, then ten years old, was there, as well as the 10 year old S.S. Smith Jr. – Gary Beatty