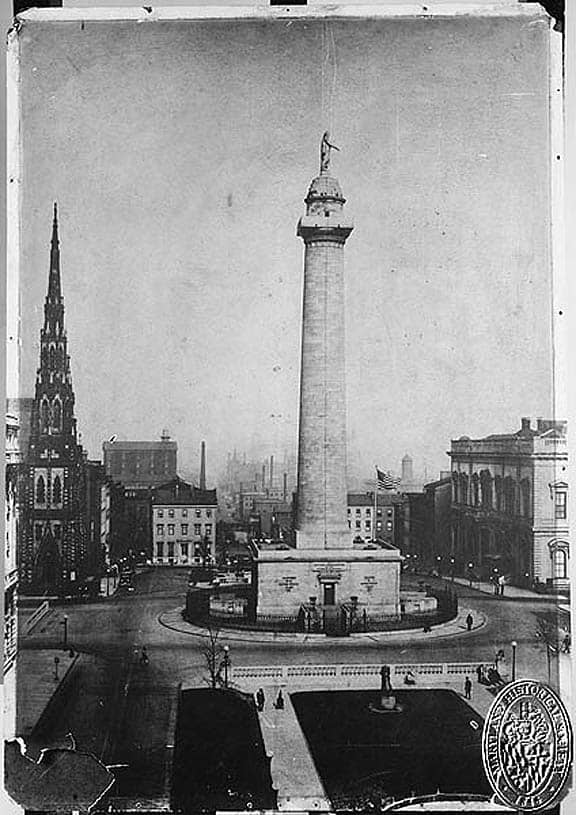 One of the first bottles that really caught my attention when I first started collecting bottles was the Washington Monument Bottle from Baltimore that commemorates George Washington. Being from Baltimore, and being a member of the Baltimore Antique Bottle Club pushed me to their web site Gallery section where I saw pictures of this elusive beauty.

Well,  earlier this week, on Presidents Day, Baltimore collector and digger, Chris Rowell posted a picture of the bottle on facebook. That set me in motion to try to get some more pictures and information. Hopefully one day I will have my own example. Maybe when I am in Baltimore next week for the Baltimore Antique Bottle Show and Sale I can go door knocking and antiquing. High wishes indeed.

Here is the response I received from Chris:

Here are some pictures of my Monument Figural as promised. The bottle is blown of a greyish clear glass and is 9 1/2″ tall. It is embossed BALTIMORE GLASSWORKS / EST’D 1790 / BAKER BROS & Co on one side THE MONUMENTAL CITY / 1880 / SESQUICENTENNIAL on the other. These are quite rare I have only seen 3 examples in clear and one in Amber.

I believe these figural’s were made for the Sesquicentennial celebration in 1880 celebrating the 150th anniversary of the founding of Baltimore in 1730. 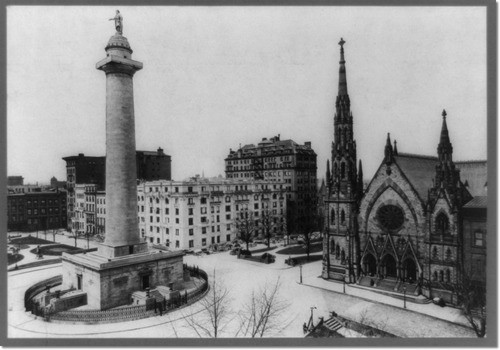 [From Wikipedia] The Washington Monument in the elegant Mount Vernon neighborhood of Baltimore, Maryland was the first architectural monument planned to honor George Washington. In 1815, a statue was designed by Robert Mills, who also designed the Washington Monument in Washington, D.C. Construction began in 1815 and was completed by 1829. The 178 foot doric column holds a ground-floor museum offering information about Washington as well as construction of the monument. Climbing the 228 steps to the top provides an excellent view of the city from the historic neighborhood where it is located. Its neighbors include the Peabody Institute.

The glorification of Washington began long before his death in December 1799, and the dedication of a memorial in his honor seemed certain. A monument honoring Washington in Baltimore was first proposed in 1809, and a committee was formed to commission and fund the monument. In 1811, the first of six lotteries, authorized by the Maryland General Assembly, was held, eventually raising enough funds to construct a Washington monument in Baltimore. Mills’s design was chosen in an architectural competition in 1815, and the cornerstone laid on July 4 of that year. 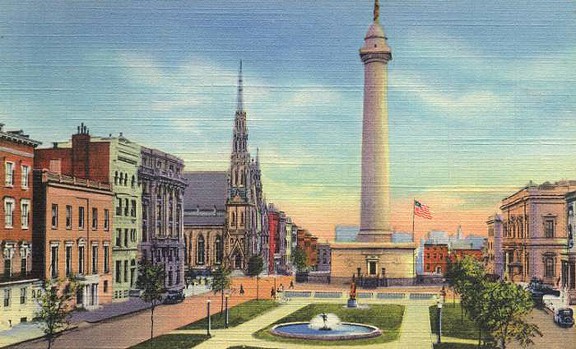 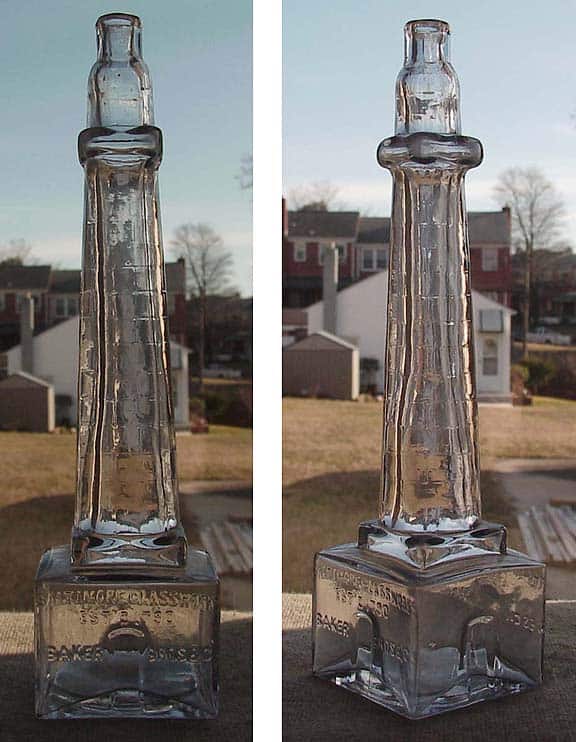 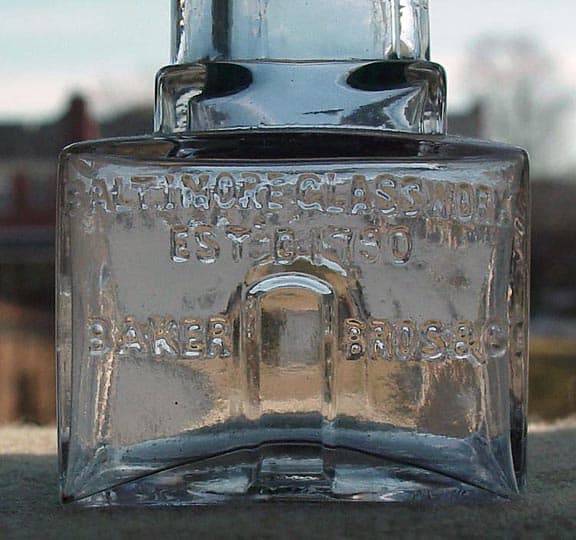 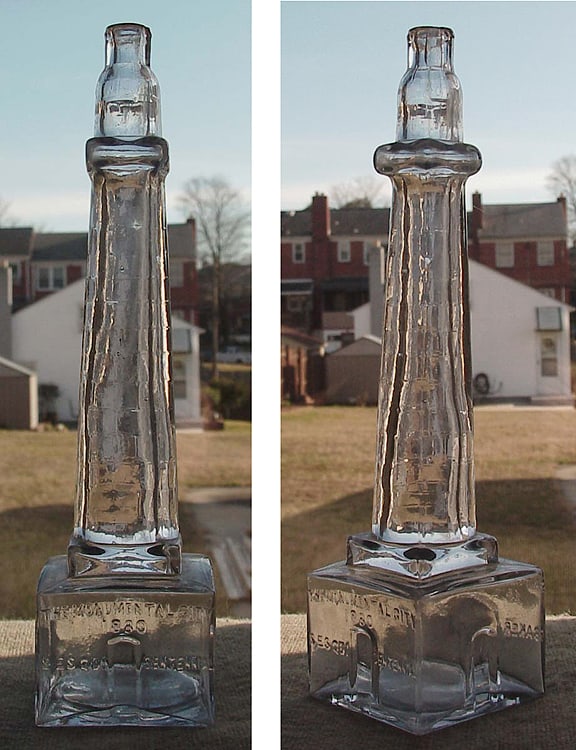 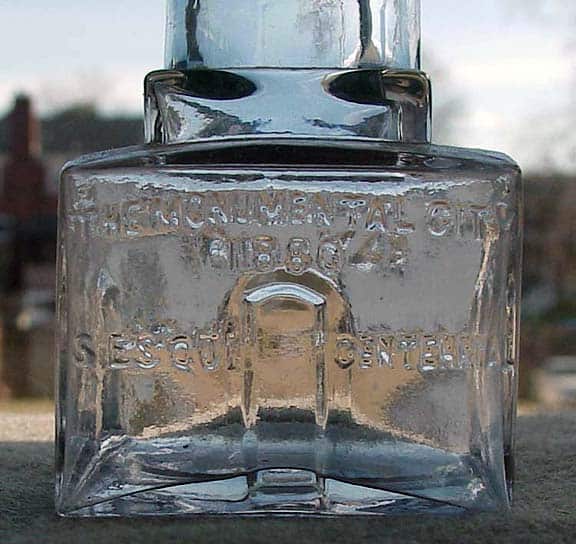 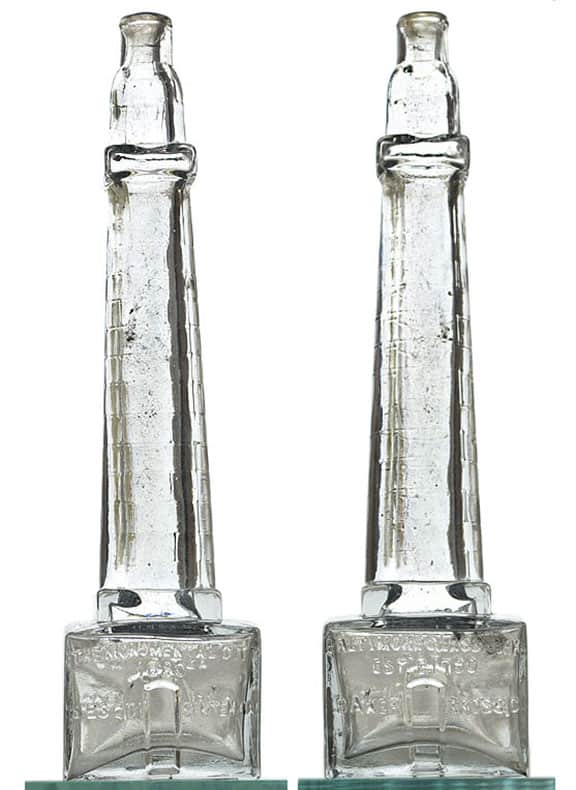 Ferdinand Meyer V is a native of Baltimore, Maryland and has a BFA in Fine Art and Graphic Design from the Kansas City Art Institute and School of Design. Ferdinand is the founding Principal of FMG Design, a nationally recognized design consultation firm. Ferdinand is a passionate collector of American historical glass specializing in bitters bottles, color runs and related classic figural bottles. He is married to Elizabeth Jane Meyer and lives in Houston, Texas with their daughter and three wonderful grandchildren. The Meyers are also very involved in Quarter Horses, antiques and early United States postage stamps. Ferdinand is the past 6-year President of the Federation of Historical Bottle Collectors and is one of the founding members of the FOHBC Virtual Museum.
View all posts by Ferdinand Meyer V →
This entry was posted in Figural Bottles, Glass Companies & Works, History and tagged Baker Brothers, Baltimore, Baltimore Glassworks, Chris Rowell, Figural, George Washington, maryland, monument, Robert Mills, Sesquicentennial, Washington. Bookmark the permalink.