Really great to see again that Bitters squares are getting top recognition. I just fell over when I saw this GREAT picture of a Dr. Hauseman’s German Bitters. Killer. 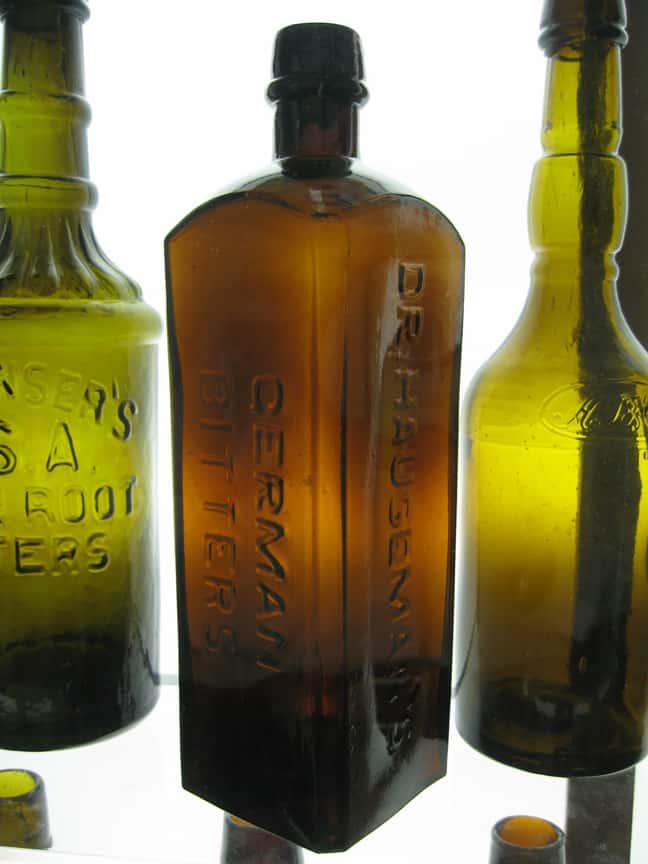 Here is a western square which is a bit of a mystery to me. The Dr. Hauseman’s German Bitters was blown in a re-worked “small” Rosenbaum’s Bitters mold and the slugged out areas are easily visible. The small Rosenbaum’s are late 1860’s, and most reference material considers this a late 1870’s or 1880’s bottle. It just seems hard to imagine that the old Rosenbaum’s molds were just laying around for 10 years, and the effort to re tool the mold was necessary to create the Hauseman’s. It would seem that this bitters could be earlier than originally thought…possibly 1870-72. Has anyone found any advertising for this bottle? They are pretty rare, with maybe 3 squares known, and possibly one or two of the flask version. Overall this has to be one of the rarest of all western bitters, and a great piece of San Francisco history.

Ferdinand Meyer V is a native of Baltimore, Maryland and has a BFA in Fine Art and Graphic Design from the Kansas City Art Institute and School of Design. Ferdinand is the founding Principal of FMG Design, a nationally recognized design consultation firm. Ferdinand is a passionate collector of American historical glass specializing in bitters bottles, color runs and related classic figural bottles. He is married to Elizabeth Jane Meyer and lives in Houston, Texas with their daughter and three wonderful grandchildren. The Meyers are also very involved in Quarter Horses, antiques and early United States postage stamps. Ferdinand is the past 6-year President of the Federation of Historical Bottle Collectors and is one of the founding members of the FOHBC Virtual Museum.
View all posts by Ferdinand Meyer V →
This entry was posted in Bitters, Collectors & Collections and tagged bitters, Dale Mlasko, Dr Hausemans, German Bitters, Miller's Extra. Bookmark the permalink.