Khoosh Bitters – The Great Tonic of the Age 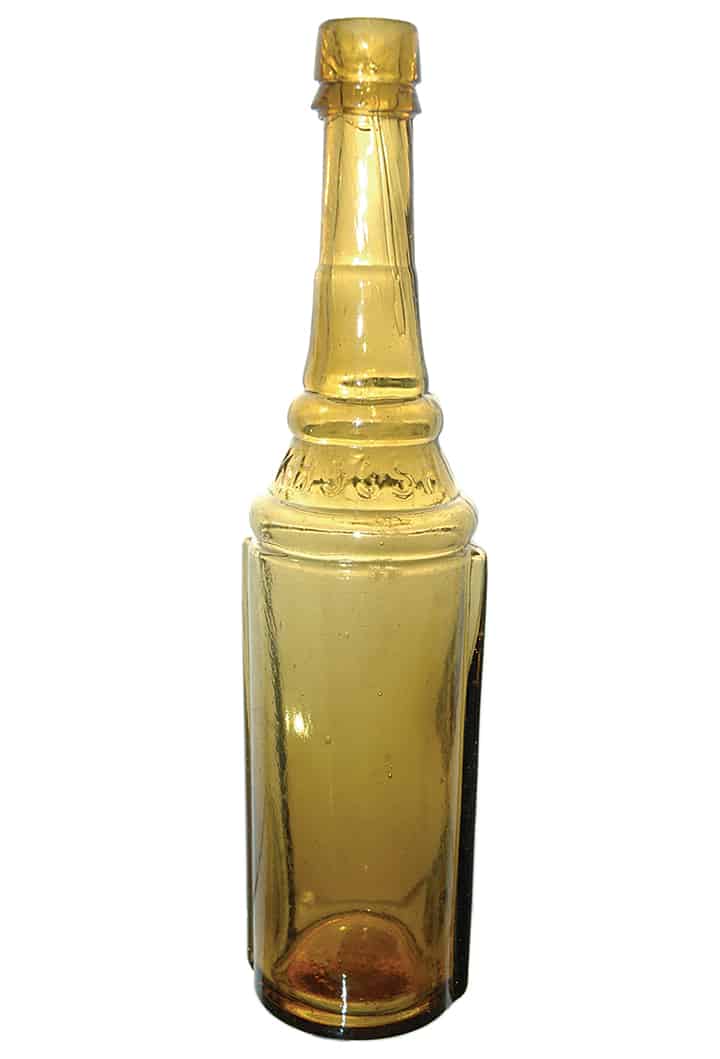 The Great Tonic of the Age – The King of Bitters

Not much attention is paid to Khoosh Bitters here in the United States as it is an English brand. I certainly understand collecting bottles from your own country, or region, or state or city, or town, as many bottle collectors do. I’m a bit of an ‘all-over-the-place’ collector, meaning that if I see or really like a bottle that has story and visuals to boot, I’m on it, and it is represented on my shelf in most cases. That is my Khoosh Bitters example at the top of the post in a topaz coloration. Great looking bottle though it is an odd size compared to most American bitters. 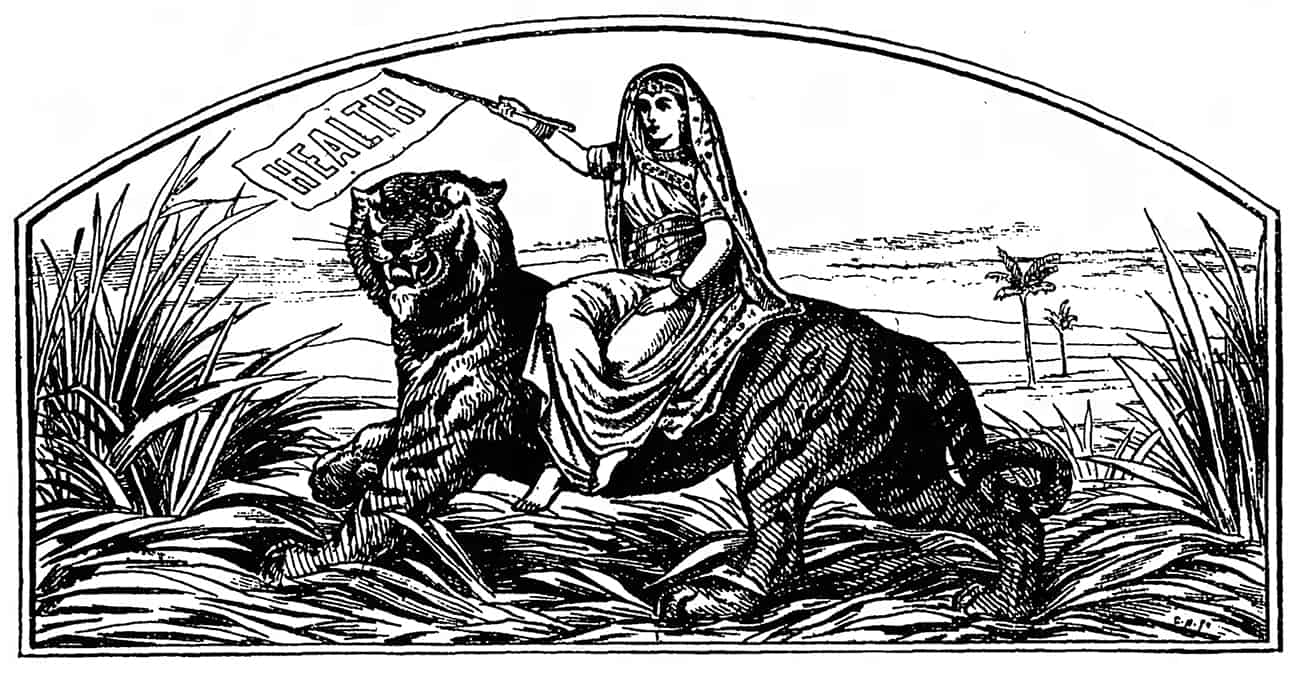 Product advertising states that Khoosh Bitters was held in great repute in India, both by natives and Europeans alike and that it had been used in the Indian empire from time immemorial. Apparently the name “Khoosh” is Indian with no English translation.

The label for Khoosh Tonic Bitters was trademarked in 1881 by Henry Davis & Co. in Liverpool, England. The trade mark shows a young Indian lady sitting on a tiger in an exotic locale. The woman is in control and in allegiance with the wild beast as she waves a banner with “Health” emblazoned on it.

The following year, in 1882, we see Khoosh Bitters advertised in London newspapers as ‘The Great Tonic of the Age’ and ‘The King of Bitters’. The bitters were being sold wholesale by the Khoosh Tonic Bitters Company, Limited at 12 Goree-piazzas in Liverpool and 24 King William Street in London. There is also a second product in that we now have a Khoosh Tonic Bitters and a Khoosh Bitters mentioned separately in the same advertisement. At the retail level you could buy a bottle for 4 pounds and get a sample bottle for 1/-.

The Khoosh Tonic Bitters Company published this 20-page Khoosh Bitters Tonic booklet in 1882. Click to read. The front and back covers are shown below along with two opening pages. I suppose the tiger represents the bad as Indian hunters on elephants are loading, aiming and shooting their rifles. So, buy and take Khoosh Tonic Bitters to kill that beast within you whether it be indigestion, liver disease, jaundice, heartburn, dyspepsia or the myriad of other afflictions this bitters was reported to cure. Or you could take it as an appetizer by adding a little in your tea, coffee, cocoa, or milk; and “unless taken in excess does not interfere with the colour, flavour or bouquet of the most delicate wines or liquors.” It was also strongly recommended to be taken in a wineglass of water half-an-hour before breakfast. The proprietors had all bases covered. 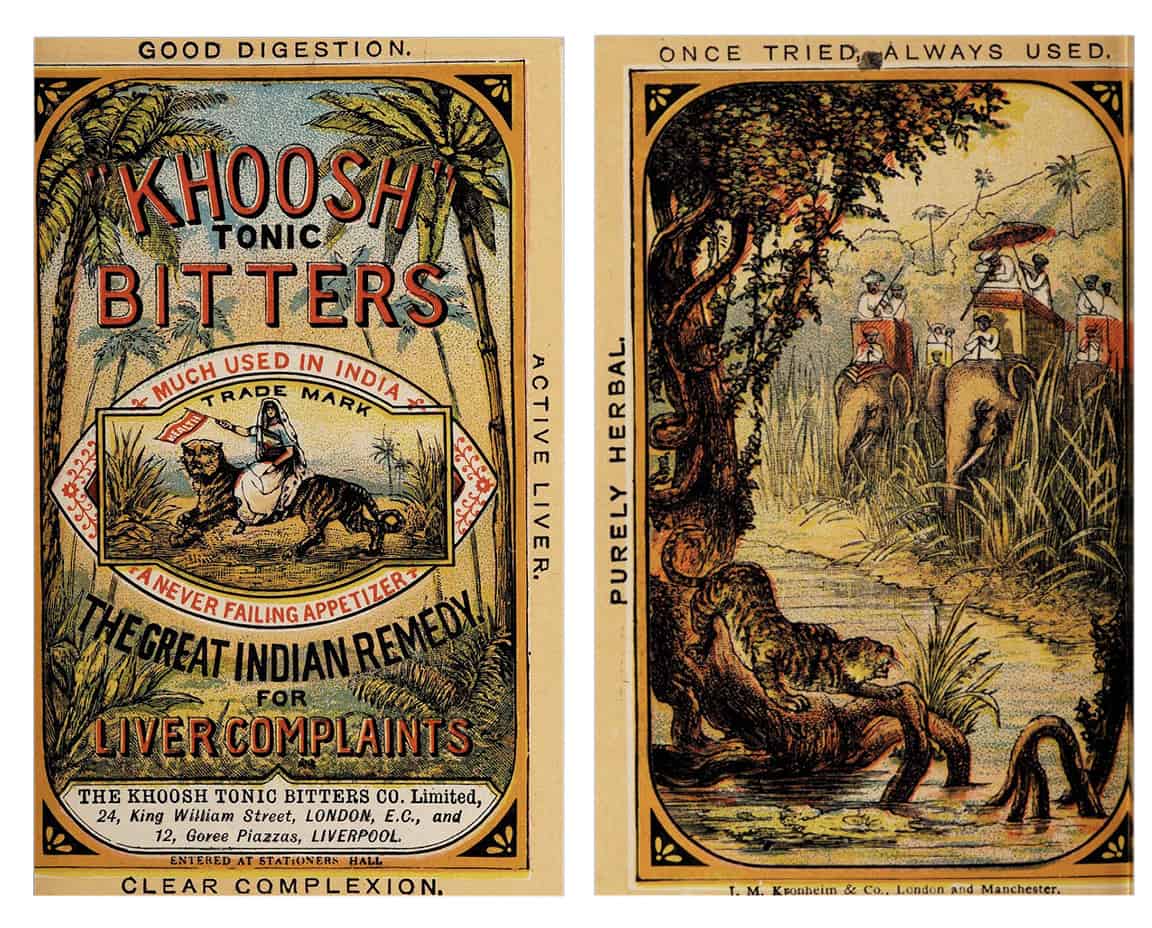 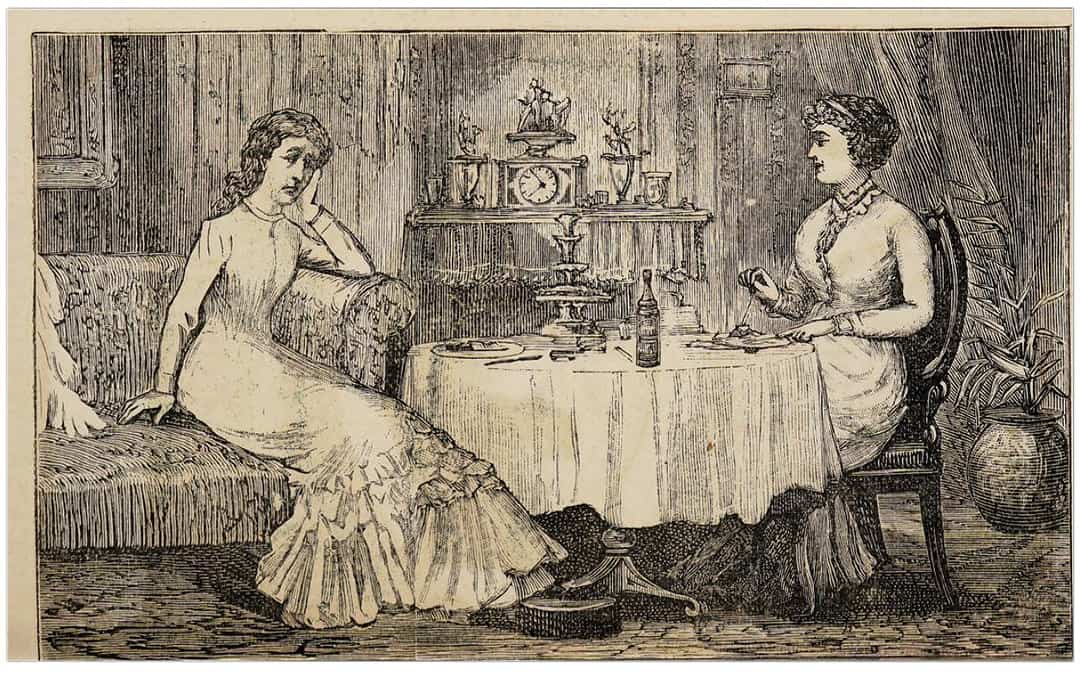 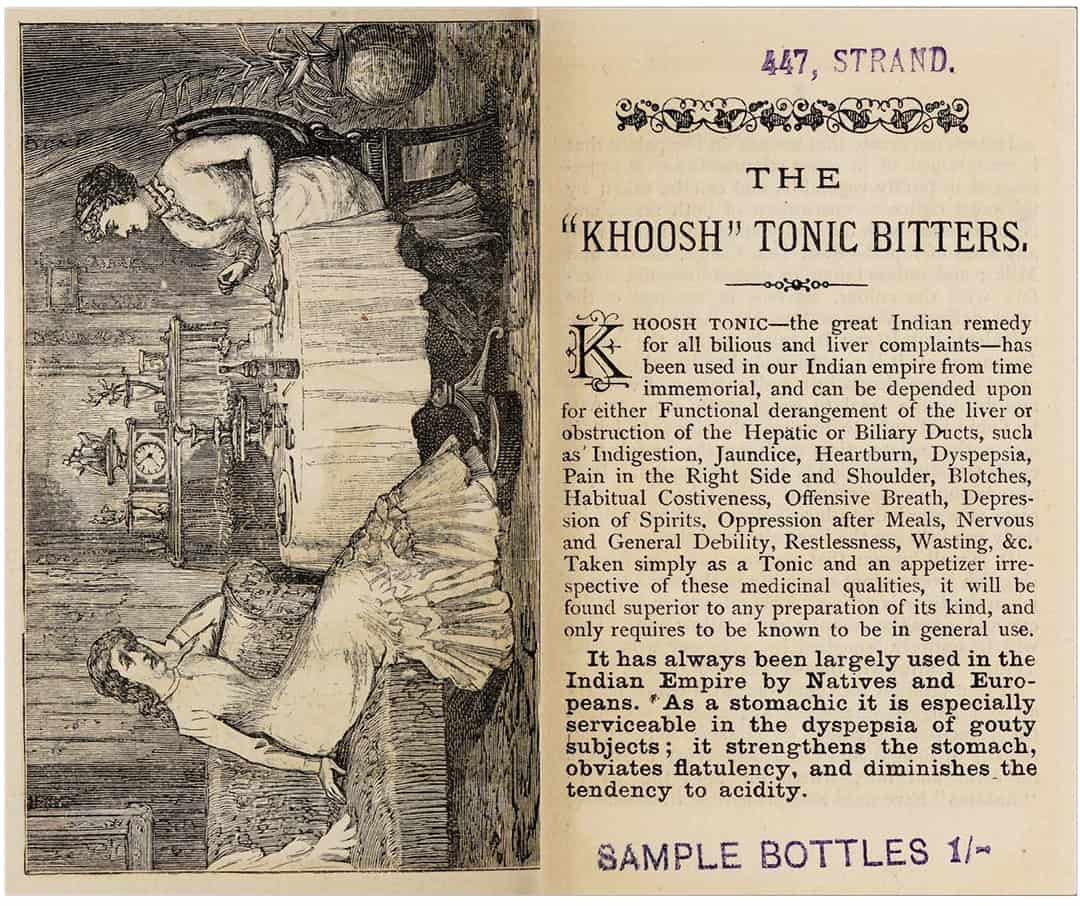 This was a women’s product with a method to deliver alcohol under the guise of medicine, like most bitters. “Nothing tries or irritates a man’s temper more than a sluggish liver”, so give him some Khoosh Tonic Bitters!

Here below is the text from an advertisement disguised as a medical article within The Monthly Magazine of Pharmacy, Chemistry, Medicine in 1883.

Khoosh Tonic Bitters are being sold largely all over the Kingdom, They are bitters of the most excellent and harmless character, and prior to being introduced here have been held in great repute in India, both by natives and Europeans. The name “Khoosh” is Indian, but the English meaning of the word we do not know. The trade mark, we might also say, is Indian, in as much as it consists of a tiger and young Indian lady. The young lady seems quite at home on the tiger’s back, and is waving a flag which bears the word “Health” upon it. Khoosh bitters is a good stomachic, a first rate appetiser, and of agreeable flavour. The proprietors recommend this preparation for a variety of complaints.

The circular accompanying the sample we have received says: “It does not create that nausea on the palate that is complained of in other stimulants to the appetite; it is purely vegetable, and can be taken by the most delicate constitutions of both sexes, and is suitable for both old and young, and mixes with any kind of liquid – even tea, coffee, cocoa, and milk; and unless taken in excess does not interfere with the colour, flavour or bouquet of the most delicate wines or liquors. A few drops are sufficient, but it can be taken to suit the palate. During meals it is recommended to be taken—say about a dozen drops in a half tumbler of water—and during the meal to occasionally sip. It will be found not only to increase the appetite but it cleans the palate, thus enabling the partaker to enjoy the different viands being consumed. It is also strongly recommended to be taken in a wineglass of water half-an-hour before breakfast. By its daily use it keeps the liver always active.

It is a familiar fact, and one with which nearly all old Anglo Indians are acquainted, viz., that the principal ingredient of Khoosh is the great remedy in Bengal and the North-West Provinces for liver and bile, where for ages the native “hakims” have used and prescribed it, esteeming it of high medicinal virtue for clearing the brain and lightening the liver. The ignorance of most people on this subject in this country is immense, yet by the means of Khoosh, during the hot season in India, civilians, ladies, and all people leading sedentary lives keep themselves in health, and without this tonic life would be almost unbearable.

The Khoosh Tonic is equally efficacious in this country for weak stomachs, impaired digestion, and most disorders of the liver. It acts like magic, and not only brings back the appetite, but restores the long-lost complexion, and by acting directly on the liver, creates the bloom of health. Nothing tries or irritates a man’s temper more than a sluggish liver. Hitherto we have had recourse to either a blue or a podophylon pill, which are drastic remedies. Their effects soon pass off”, and when often used produce a bad condition of the liver. It will never be otherwise, however, until the sufferer will try the Khoosh Tonic, which gives almost immediate relief, and will prevent his requiring either of the above remedies.”

This preparation is elegantly got up; it retails at 4s., on which there is a good profit to the trade. Chemists desirous of pushing this article can have circulars and printed matter on application to the wholesale houses or to the Company, at their offices, 24, King William Street, London.

The next full-page “The Famous Eastern Bitter” advertisement is from The British Foreign and Colonial Journal. It ran for most of 1890. The advertisement notes that a Gold Medal (Highest Award) was given to Khoosh Bitters at the Liverpool International Exposition in 1886. The address for the Khoosh Tonic Bitters office in London has changed. 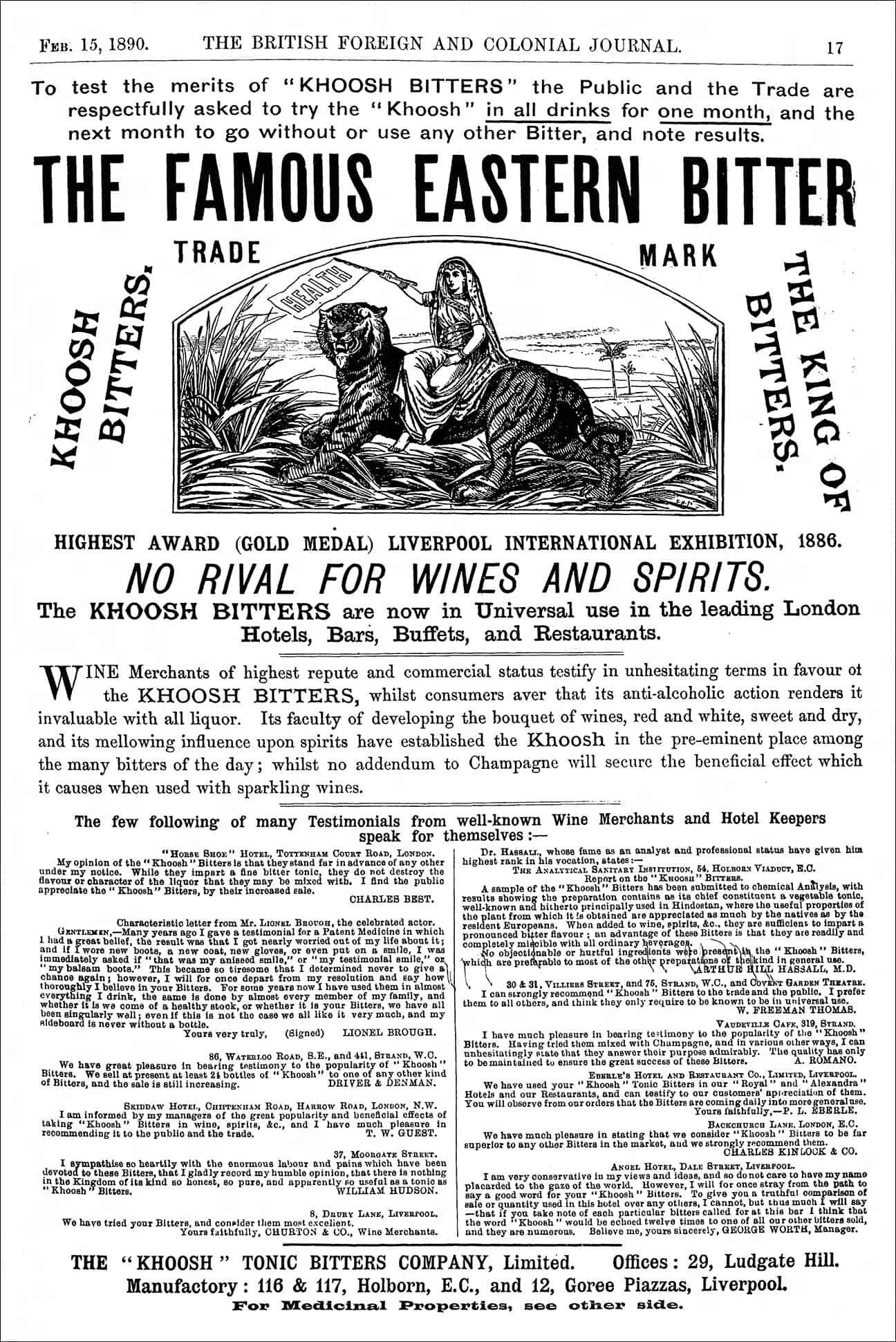 The example at the top of this post is the earlier example with KHOOSH BITTERS embossed on the shoulder. Later 20th century bottles had a bas-relief glass circle with ‘KHOOSH’ on the art-deco ringed shoulder.

This next advertisement below shows that Smith, Doolittle & Smith were selling Khoosh Bitters in Boston in 1883. 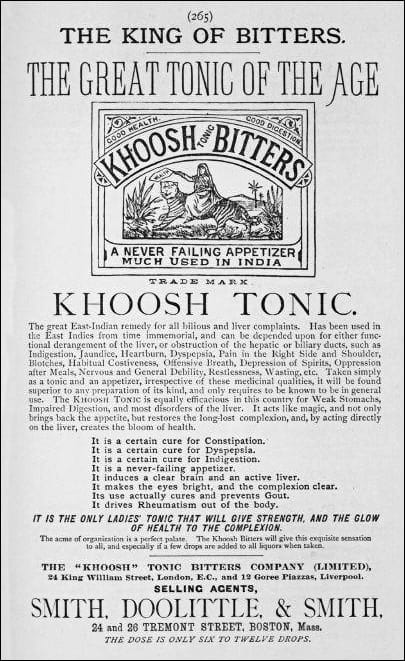 Khoosh Bitters would hit a snag in the late 1890s. In 1900, The Khoosh Tonic Bitters Company would be under a court order that forced the insolvent company into compulsory liquidation. Later brands would mimic the product as you can see from the circa 1917 bottle below that is also base embossed. If you look at the label closely, it says, “Established Over 100 Years.” That is a bit of a stretch. 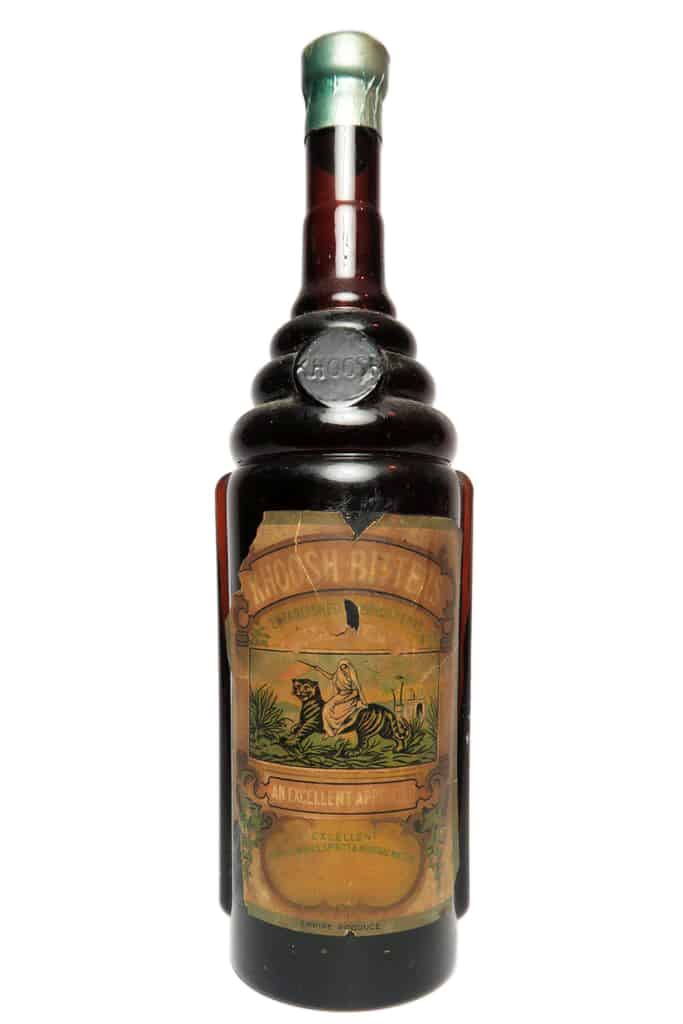 Further below, a pair of 1917 Khoosh Bitters newspaper advertisements showing Khoosh Bitters as an appetizer and that a “Khoosh Wallah” delivers the bitters with his strange and magical powers. 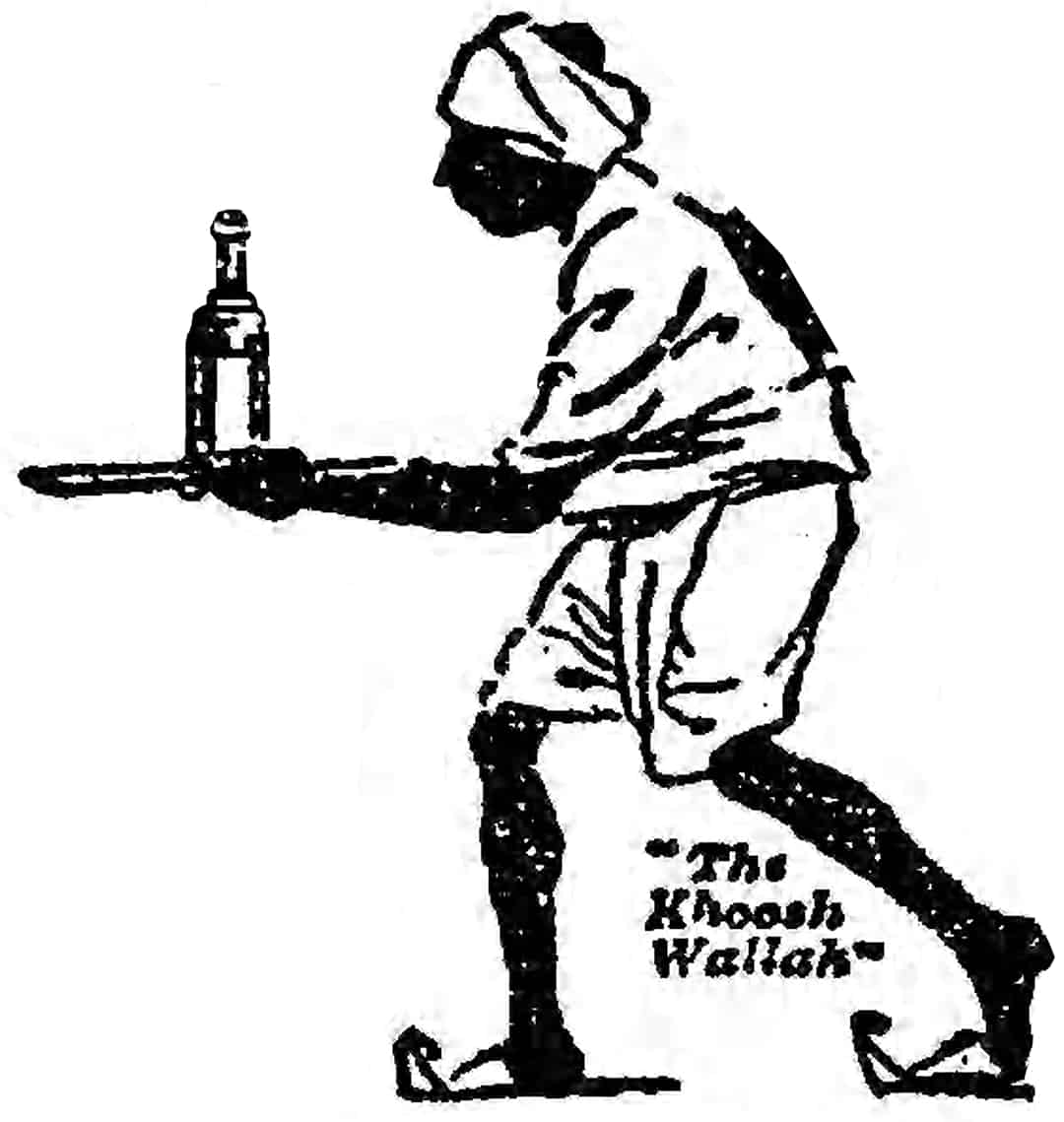 The Khoosh Bitters Proprietary Ltd. in London is now the company associated with the product. This would be the last year for common advertising though you can find excess inventory being sold in later years. 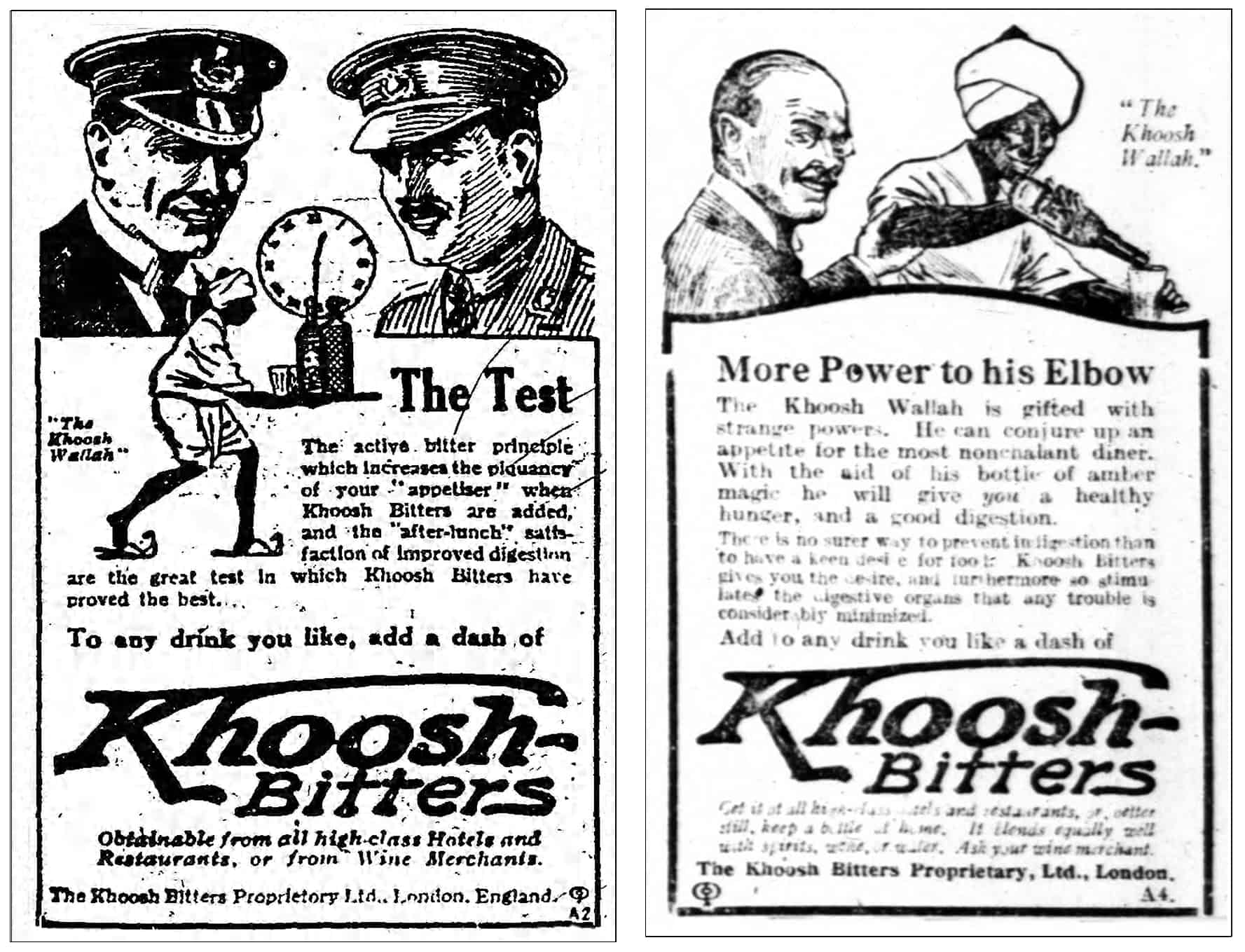 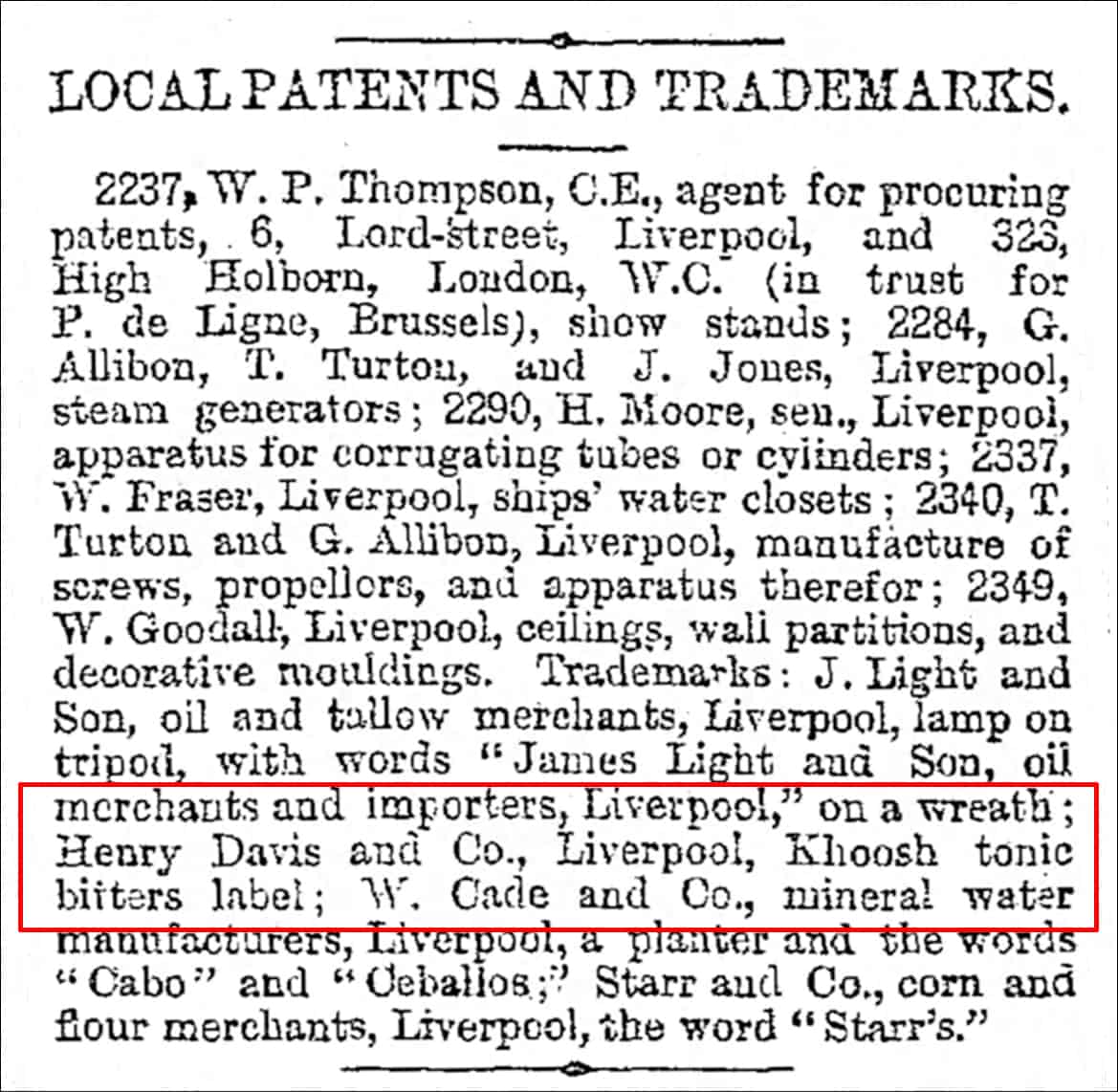 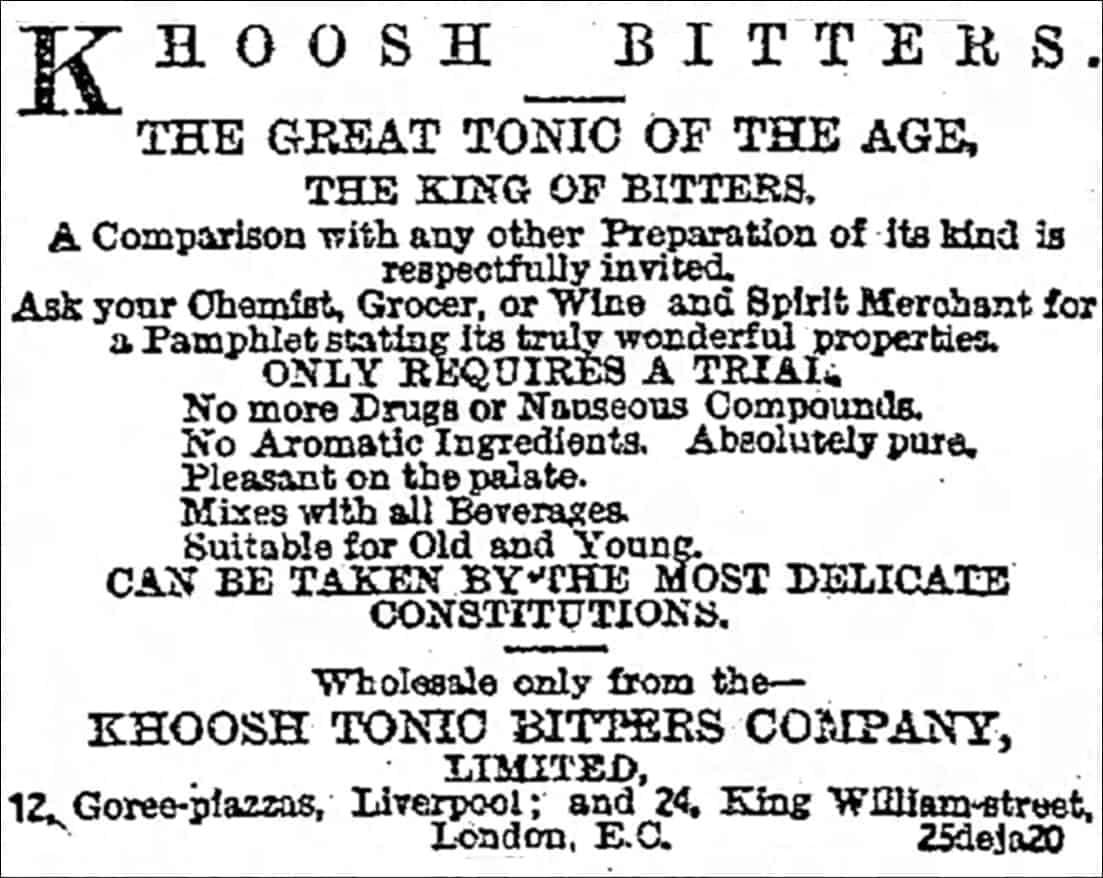 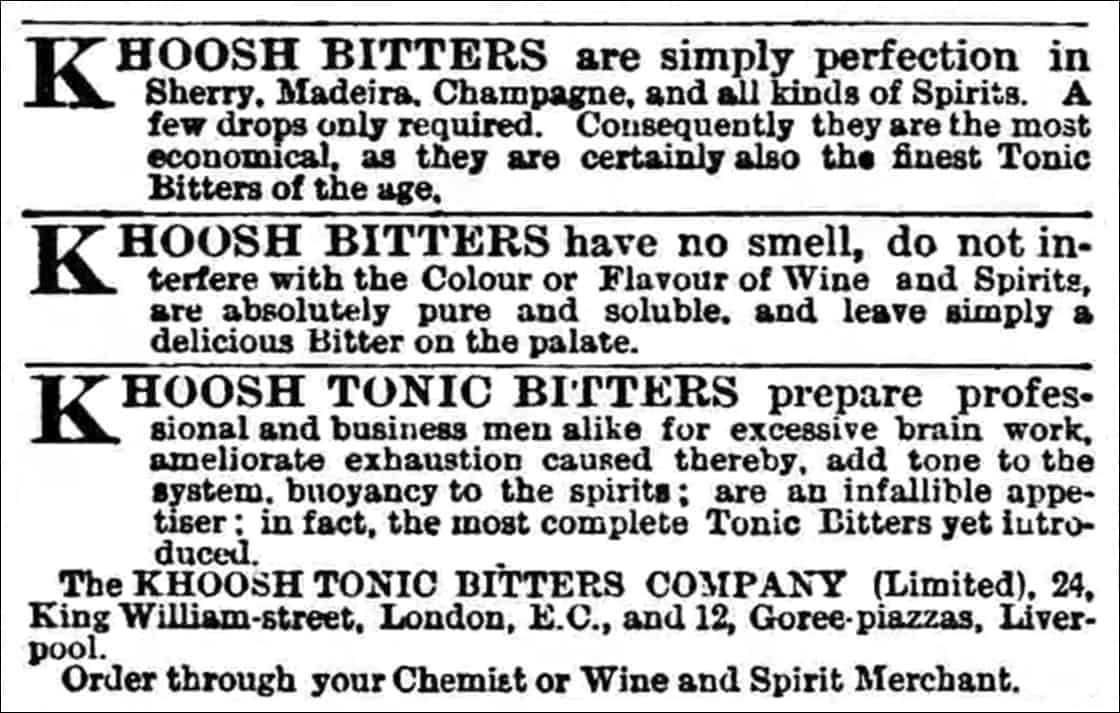 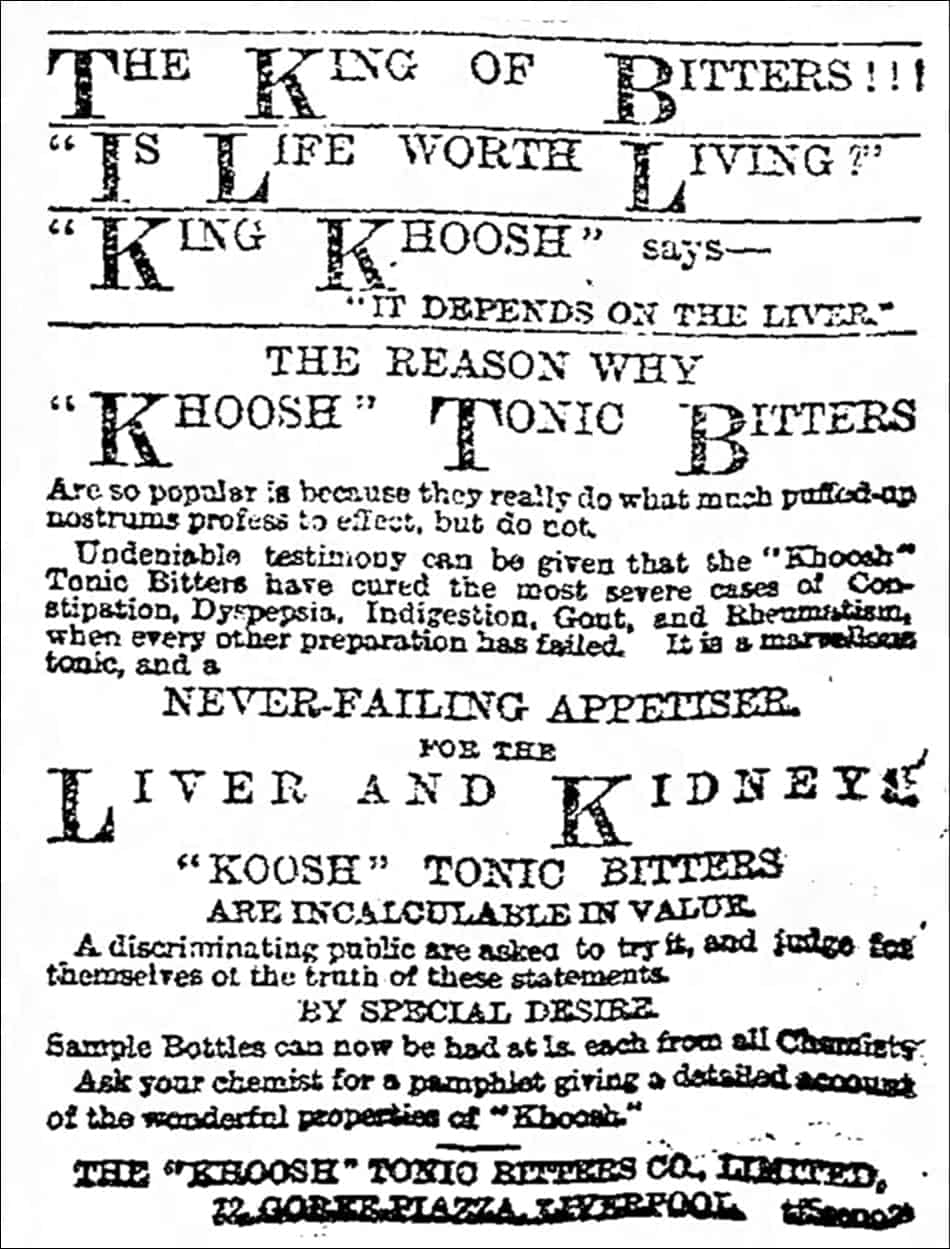 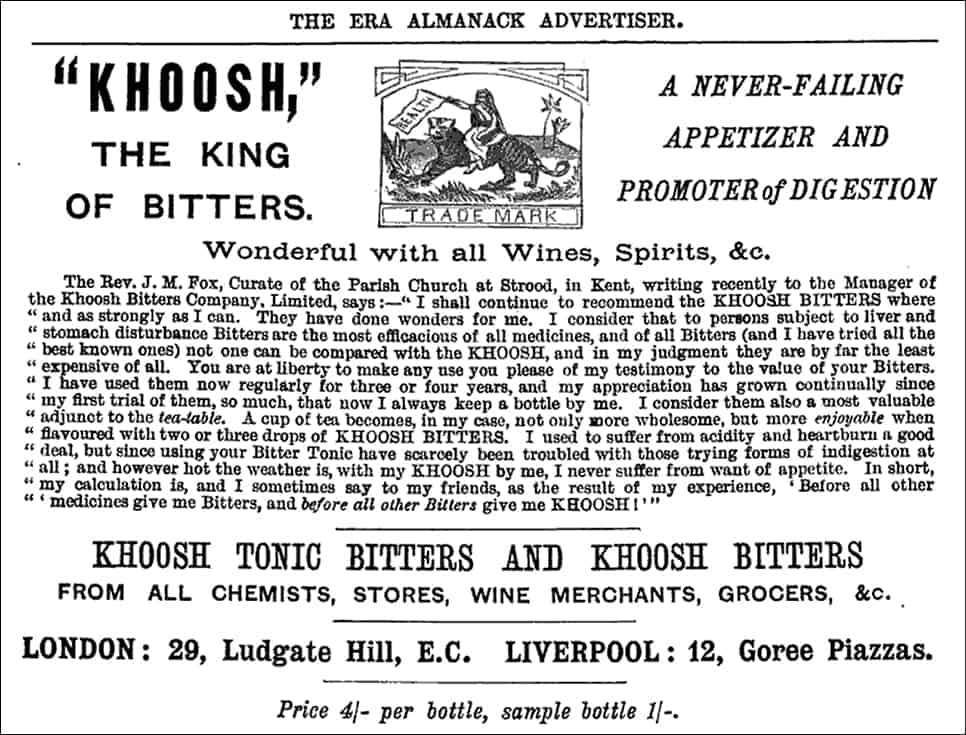 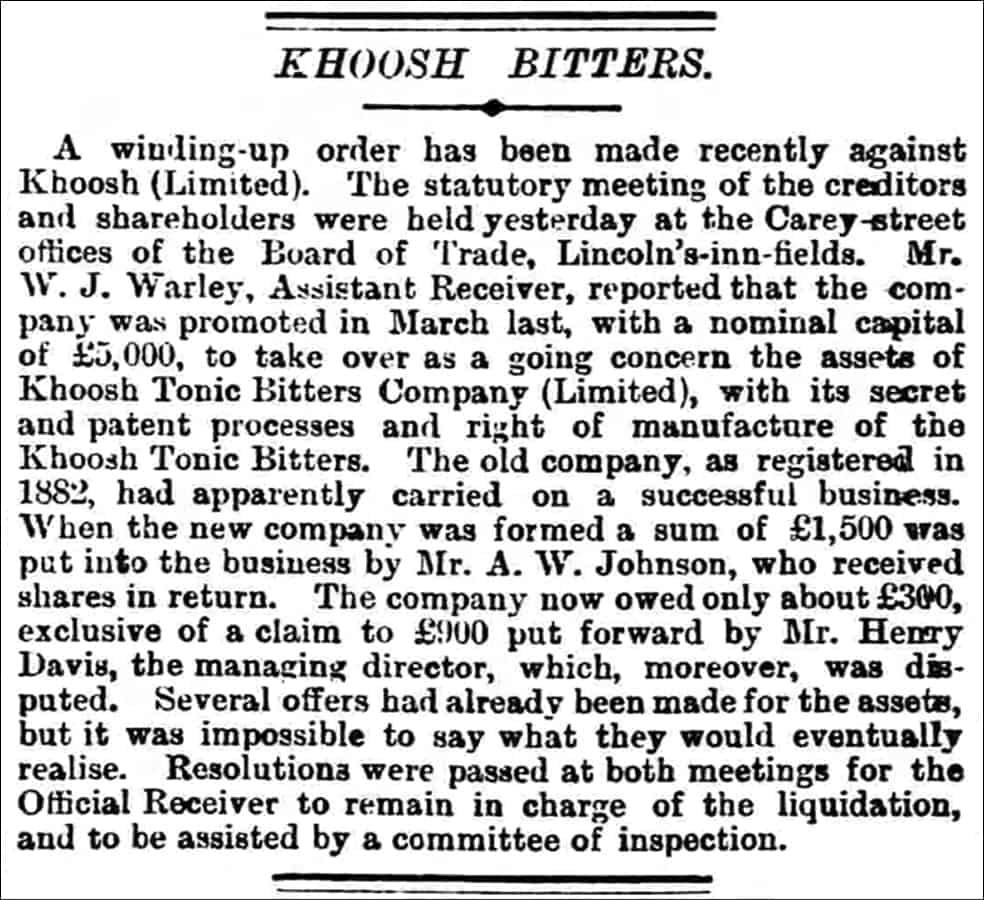 1917: Newspaper advertisement (below) The Test – Khoosh Bitters being sold as an Appetizer – The Observer , Sunday, November 11, 1917 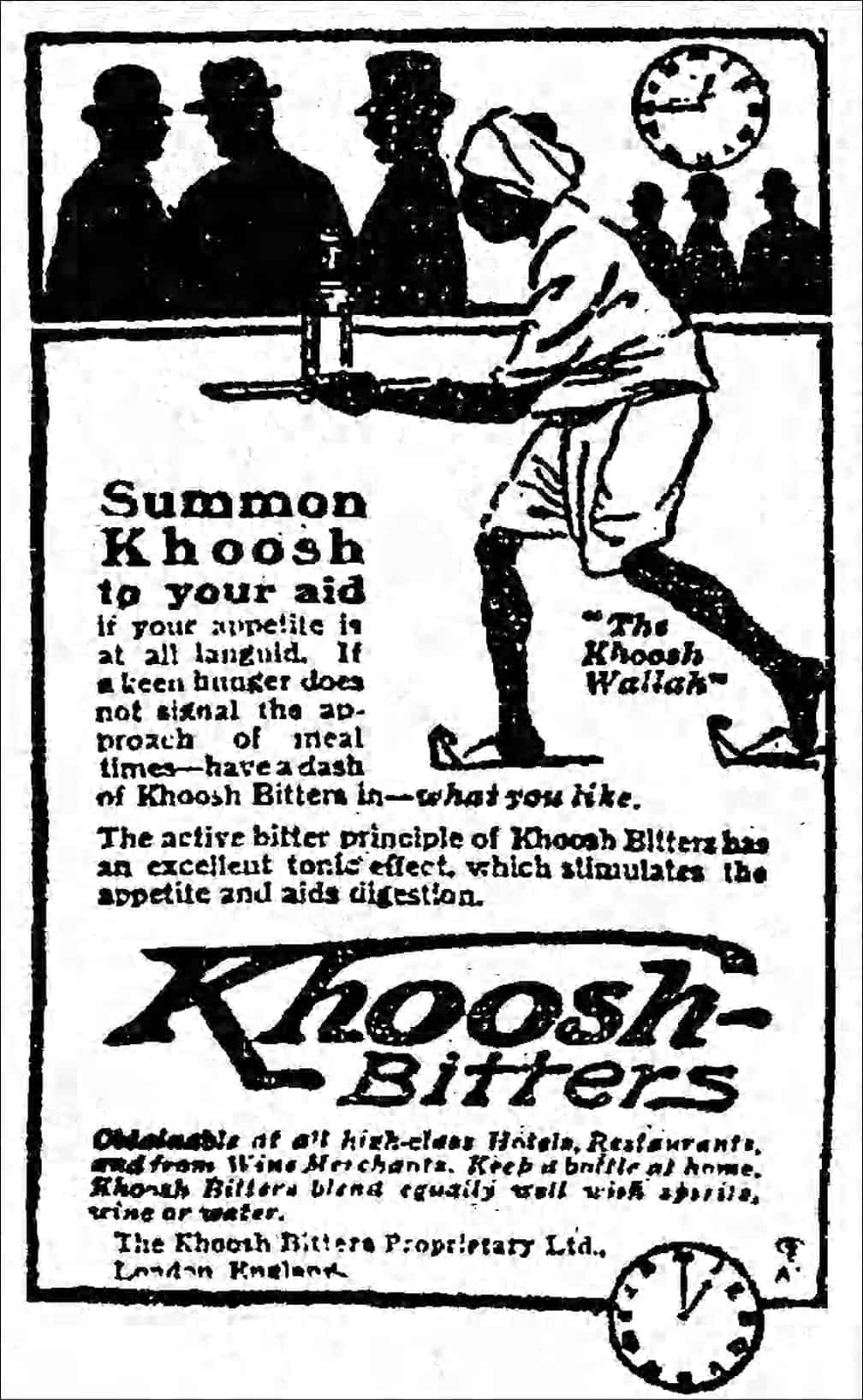 1937: Newspaper advertisement (below) Khoosh Bitters being sold at The Central Salerooms – The Guardian, Saturday, November 6, 1937 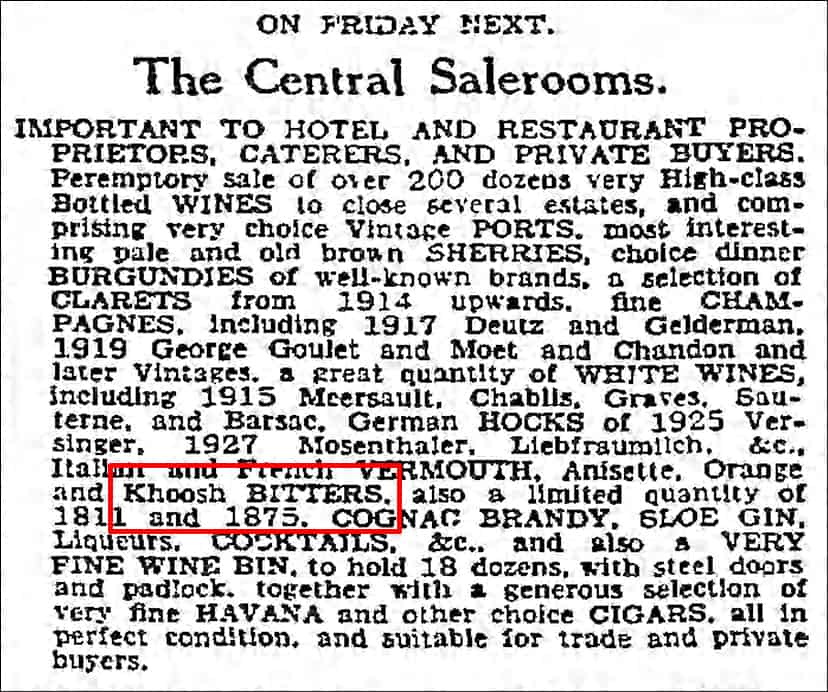 Ferdinand Meyer V is a native of Baltimore, Maryland and has a BFA in Fine Art and Graphic Design from the Kansas City Art Institute and School of Design. Ferdinand is the founding Principal of FMG Design, a nationally recognized design consultation firm. Ferdinand is a passionate collector of American historical glass specializing in bitters bottles, color runs and related classic figural bottles. He is married to Elizabeth Jane Meyer and lives in Houston, Texas with their daughter and three wonderful grandchildren. The Meyers are also very involved in Quarter Horses, antiques and early United States postage stamps. Ferdinand is the past 6-year President of the Federation of Historical Bottle Collectors and is one of the founding members of the FOHBC Virtual Museum.
View all posts by Ferdinand Meyer V →
This entry was posted in Advertising, Bitters, History, Medicines & Cures, Tonics and tagged bitters, England, health, Henry Davis & Co., Indian, Khoosh, king, Liverpool, London, tiger, Tonic, trademark, Wallah. Bookmark the permalink.