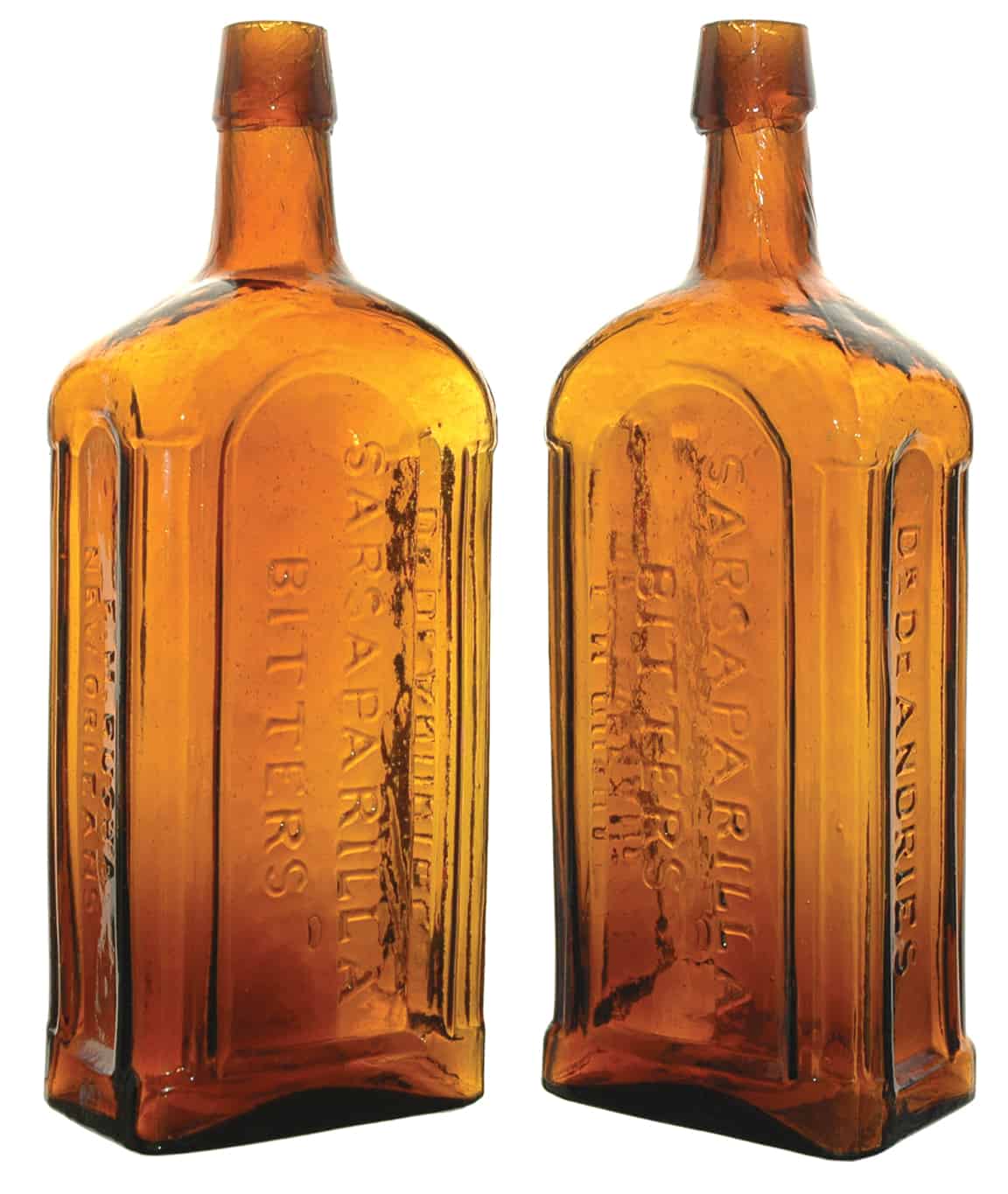 I recently updated the post for the extremely rare Dr. Hyde’s Southern Stomach Bitters put out by Dr. Edward Caleb Hyde in New Orleans around 1868. The Dr. De Andries Pure Sarsaparilla Bitters was made during the same time period by E. M. Rusha who operated within walking distance of Edward Hyde off of Tchoupitoulas Street in New Orleans. Both of their bottles are very similar with the shape, column bevel and shoulder detail. You can see a comparison below. Maybe they were friends but they were certainly competitors with their bitters. Most likely, Hyde aped Rusha with his bitters. 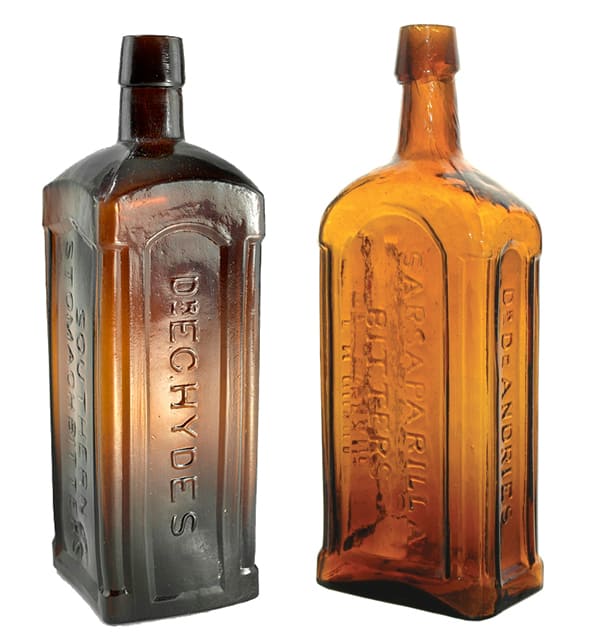 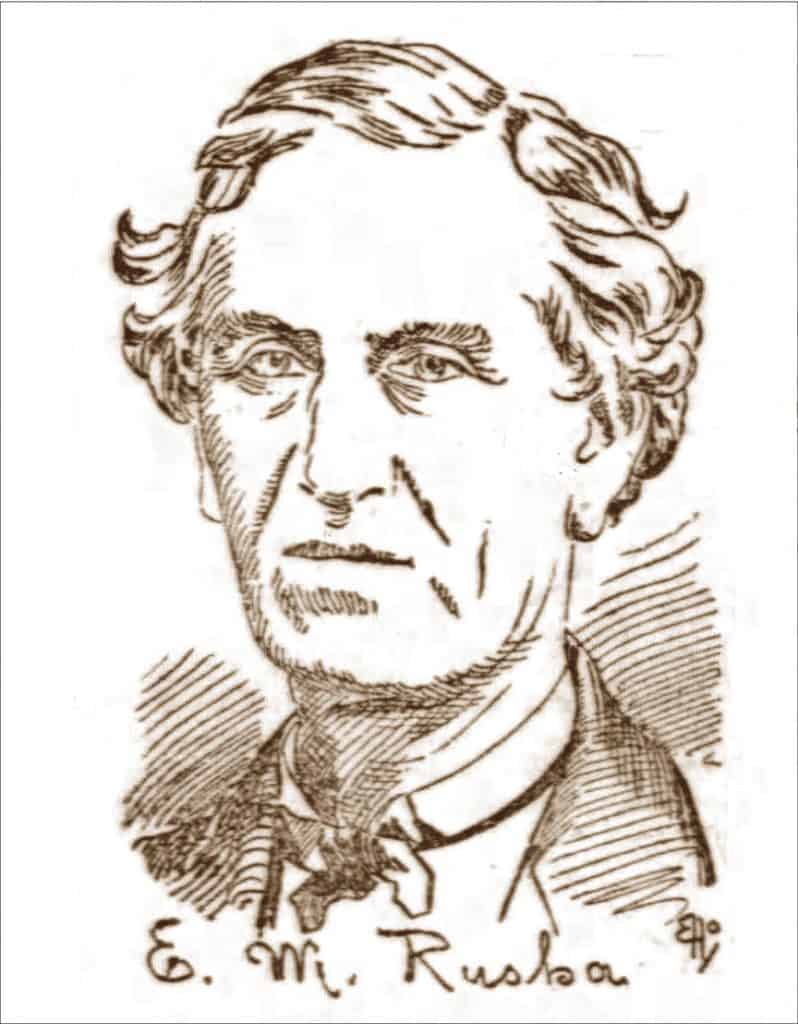 Edwin Morris Rusha was born in Philadelphia, Pennsylvania on July 6, 1811. Rusha left his parents at the young age of fourteen and came to New Orleans, Louisiana. Considered well-educated, Rusha first found employment as a painter for a short spell. He apparently was optimistic and successful in his early endeavors as he sent for his mother when he was twenty years old. His father had died shortly after his departure from Philadelphia. Rusha was close to his mother and she lived with him until she died many years later. 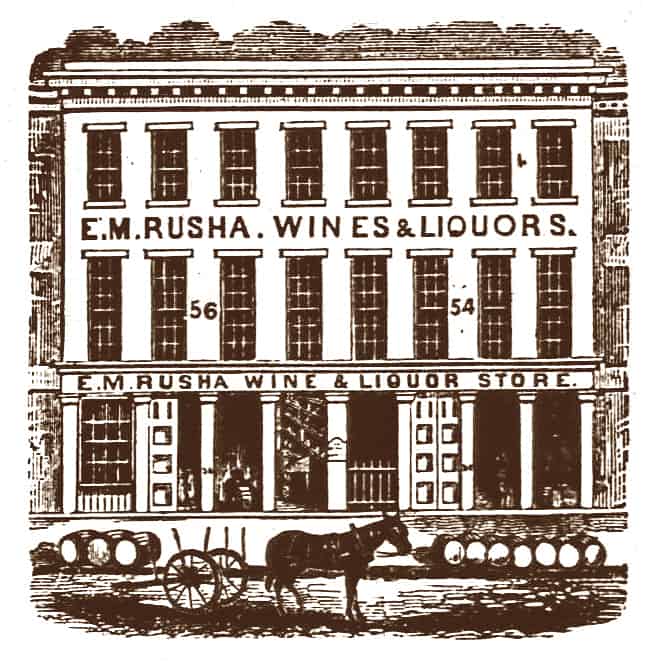 When he was twenty-two years old, Edwin M. Rusha went into the wholesale liquor business on Girod Street near Tchoupitoulas. He would remain on this street for half a century selling wines and liquor. He was well-known, popular and had continued success with his various pursuits which included land sales, real estate and being a cotton factor and general commission agent. It was not uncommon to see a newspaper notice saying 50 or 100 barrels of whiskey was headed his way down the Mississippi on a steamer. Great advance advertising if you liked Kentucky whiskey.

On March 9, 1837, Rusha married Mary Ann Sherman and they remained together for fifty-three years until she died in 1890. They would have fourteen children. Some would help with clerking at the liquor store. Quite a nest and a trustful work force.

For Sale: An old Negro Woman, a good Cook and Washer, to a good master will be sold at a bargain. Apply to E. M. Rusha, 24 Girod Street

Rusha once posted a newspaper ‘For Sale’ advertisement in 1850 where he was selling “An old Negro Woman, a good Cook and Washer, to a good master will be sold at a bargain.” I don’t have an illustration but I can certainly concur up an image in my mind. Sad, but true. I guess he was a generous man as another newspaper notice thanked him for sending the editors of The New Orleans Piscayune a basket of delicious peaches that were raised in his nursery in Livingston Parish, Louisiana.

Yet another newspaper notice states that his young son “had the flesh crushed off the bone of one of his hips last evening, by being caught between the cars on the Carrolton Railroad, whilst attempting, boy-like, to help himself to an outside ride.” You see these train-hopping notes in newspapers all the time, even nowadays. The New Orleans and Carrollton Railroad was one of six short-line rail systems built to connect the city of New Orleans with surrounding neighborhoods, in this case, four-and-a-half miles to the resort village of Carrollton. It was one of the first public transit trolley systems built in the urban United States. All of these referenced newspaper clippings can be read in full in the timeline at the end of this post.

In 1854, Rusha was firmly established as an Importer of Foreign Wines and Liquors and a Dealer in Domestic Spirits. He sold a wide range of products such as a general assortment of French brandies, wines, fruits in liquor, assorted cordials, bitters, essence, peppermint, curacao etc. By 1860, he was running full-page ads within the annual New Orleans City Directory. The U.S. Federal Census that year noted that he had real estate value of $50,000 and a personal estate value of $20,000. 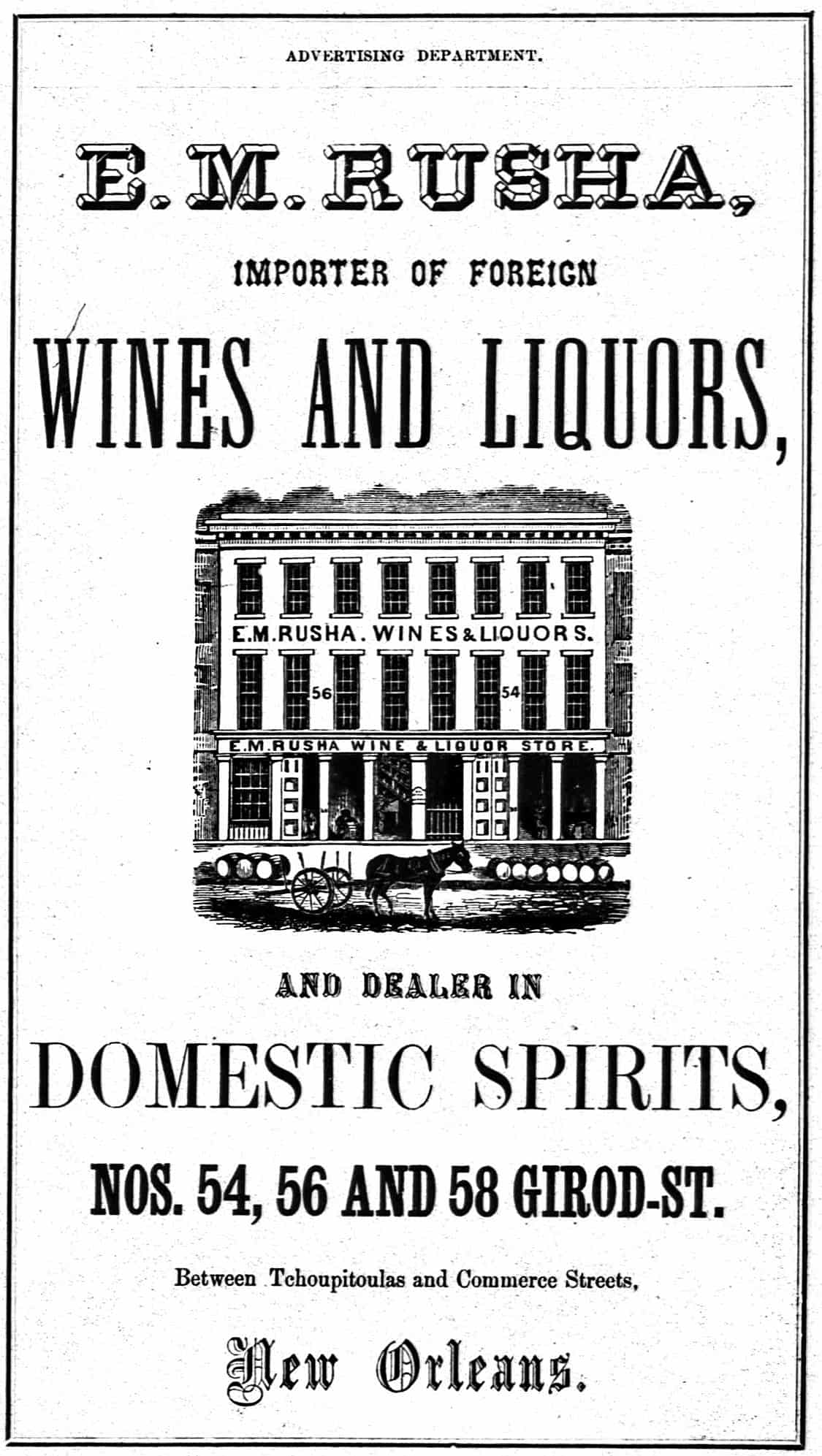 By 1863, we see Rusha’s first advertisement for his Dr. De Andries Pure Sarsaparilla Bitters. The 1867 advertisement and illustration below looks like some pretty happy fellows partaking in his bitters. By the way, I really do not think that there was a Dr. De Andries. This was probably a made-up name to give his brand legitimacy. Rusha could not call himself a ‘Doctor’ as Edward Hyde did with his Dr. Hyde’s Southern Stomach Bitters. You could get away with a lot more stuff back then. You know, drink this medicine that was full of alcohol that was sold at a liquor establishment so you could tell your wife that you weren’t at the saloon. 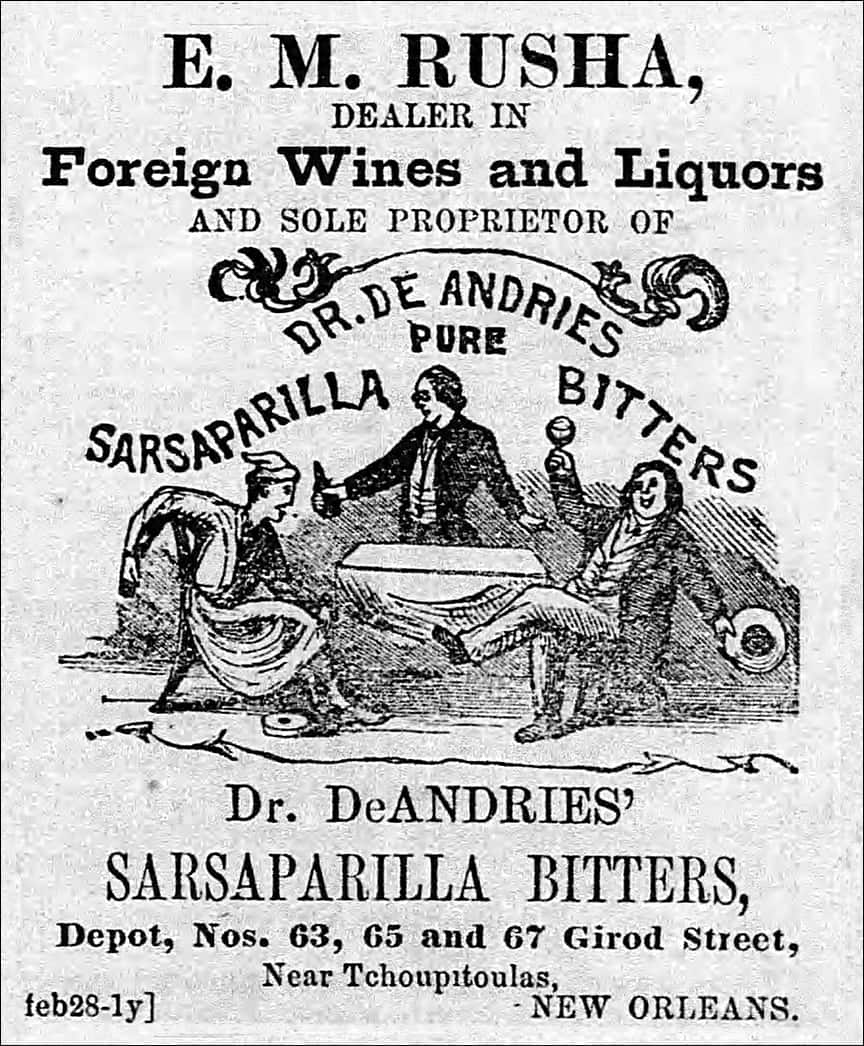 Also in 1867, Rusha takes a full-page city directory ad that is similar to the ad further above but now states that he is the Proprietor of Dr. De Andries Pure Sarsaparilla Bitters. As noted previously, he actually began selling it in 1863. He says that it is sold by grocers and druggists throughout the United States and that his bitters “are the best Preventative of Health ever introduced into this Country. As a general drink they are exhilarating; they give tone to the stomach, being free from all impurities.” He also says that his bitters are “Guaranteed to be Purely Vegetable” which might make you think there was no alcohol in it. You can bet dollars to doughnuts that his bitters was fully spiked. Another ad infers that Gen. Grant was recommending Dr. De Andries Pure Sarsaparilla Bitters for Cholera. 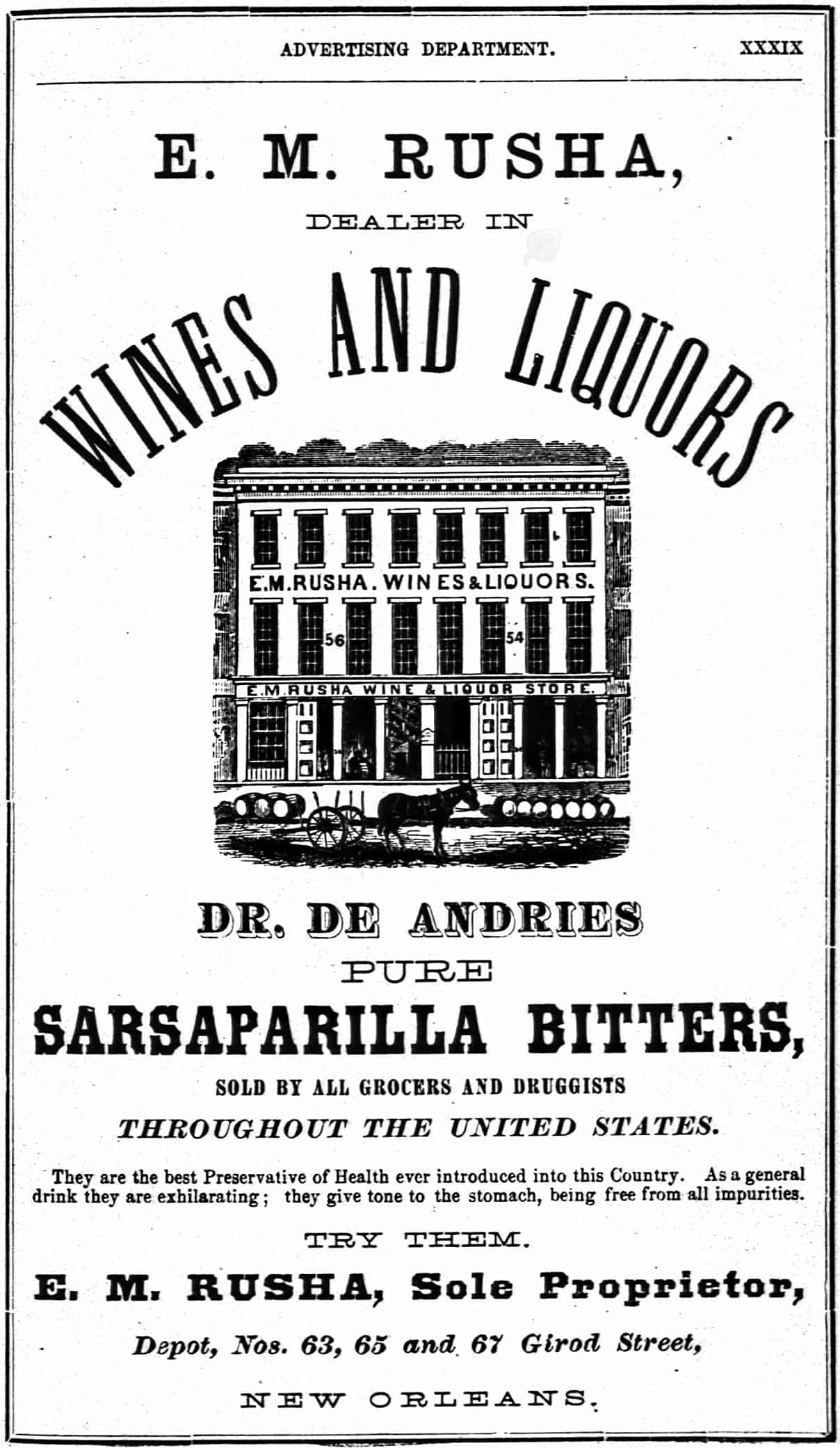 During all these years, Rusha was very high up in the leadership of the Independent Order of Odd Fellows in New Orleans. The I.O.O.F. was (and is) a non-political and non-sectarian international secret society and fraternal order of Odd Fellowship. It was founded in 1819 by Thomas Wildey in Baltimore, Maryland though its origins were much earlier in England. 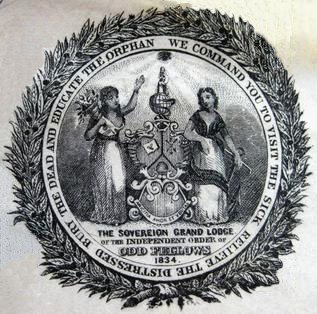 Rusha left the I.O.O.F. in 1891, renouncing the secret society and joined the Catholic Church. He was in prayer with Rev. Father Cavanaugh of St. Stephen’s Church when he suffered his third stroke and died on August 24, 1893 at the age of 82. Quite a man, quite a life and quite a bitters. 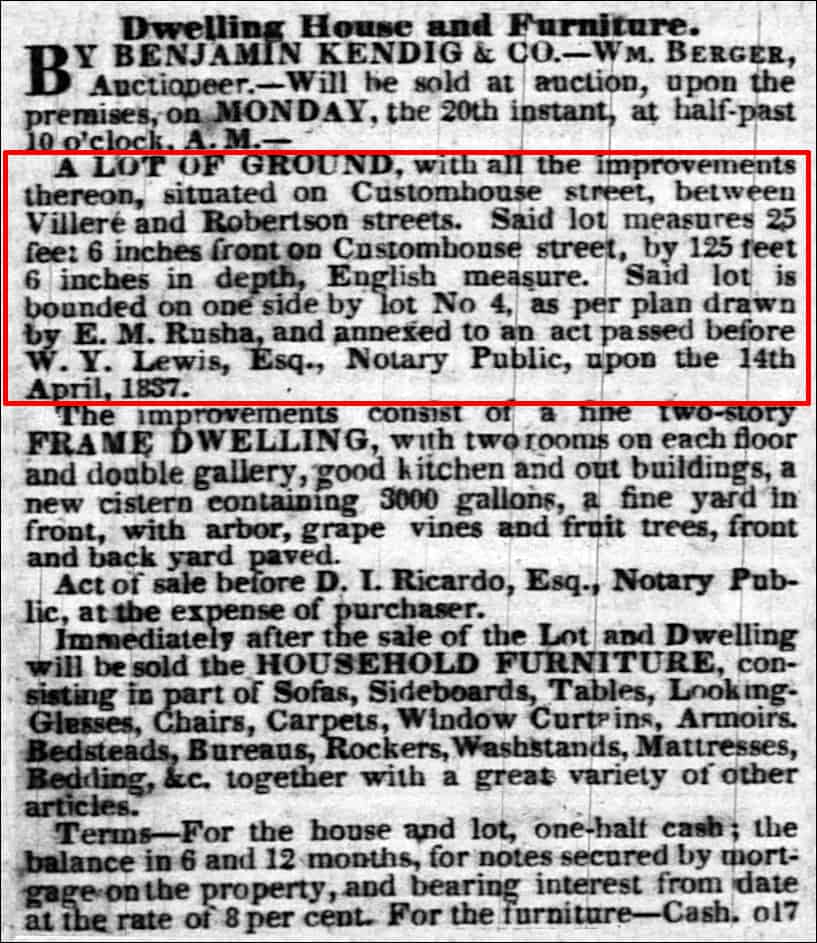 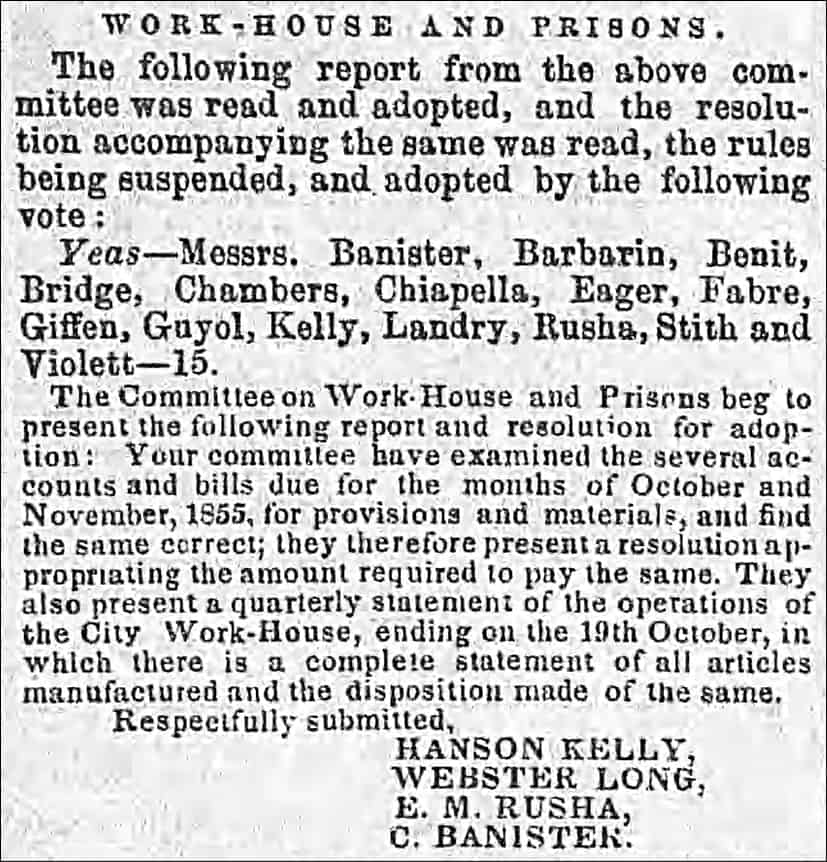 1857: Newspaper notice (below) E.M. Rusha sends the editors of the New Orleans Piscayune a basket of delicious peaches, raised in the nursery of E.M. Rusha of Livingston Parish, Louisiana – Nashville Union and American, Saturday, July 11, 1857

1861: Newspaper notice (below) Accident to a Boy: Son of E.M. Rusha injured hitching a ride on a moving train – The New Orleans, Crescent, Thursday, February 7, 1861 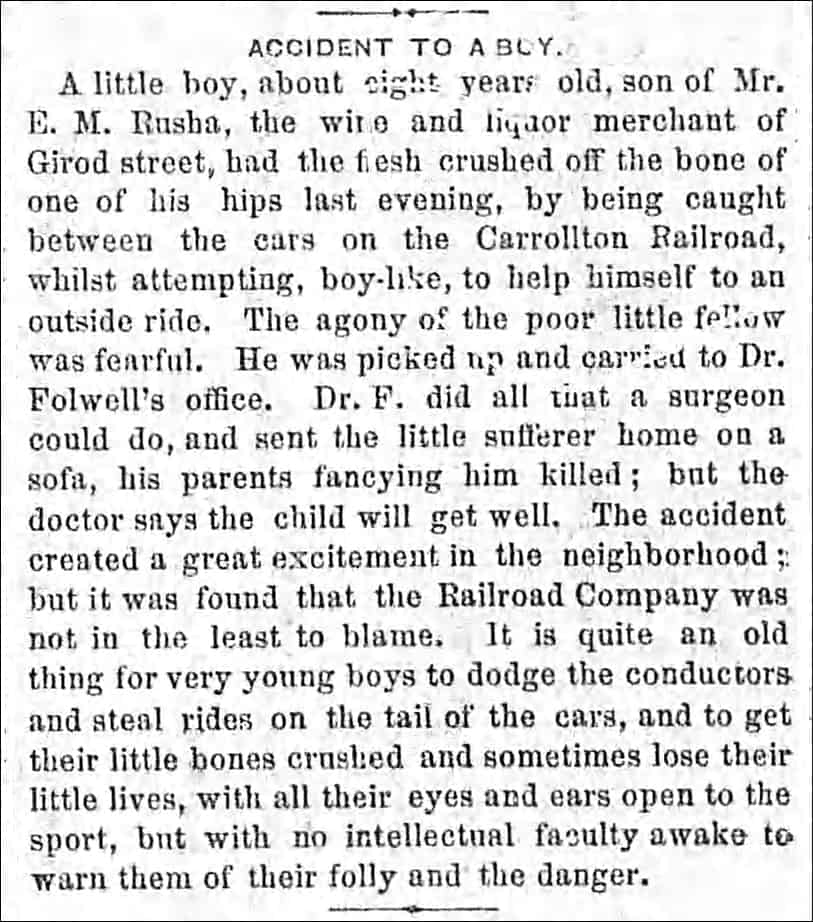 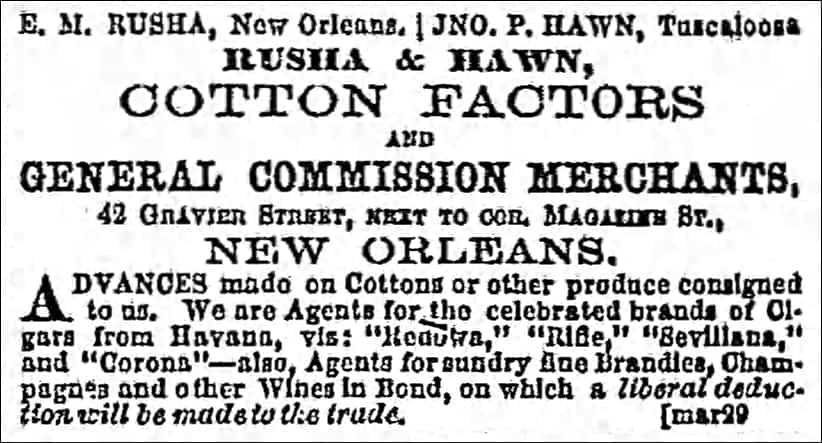 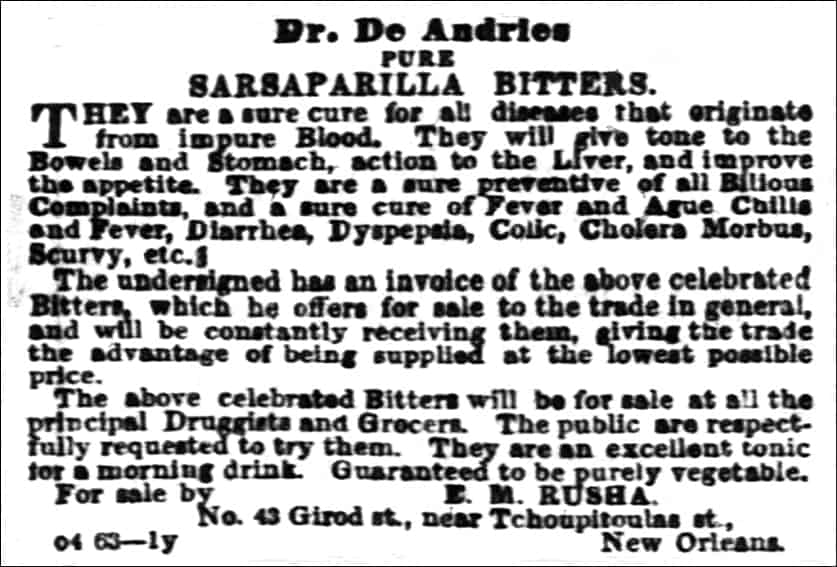 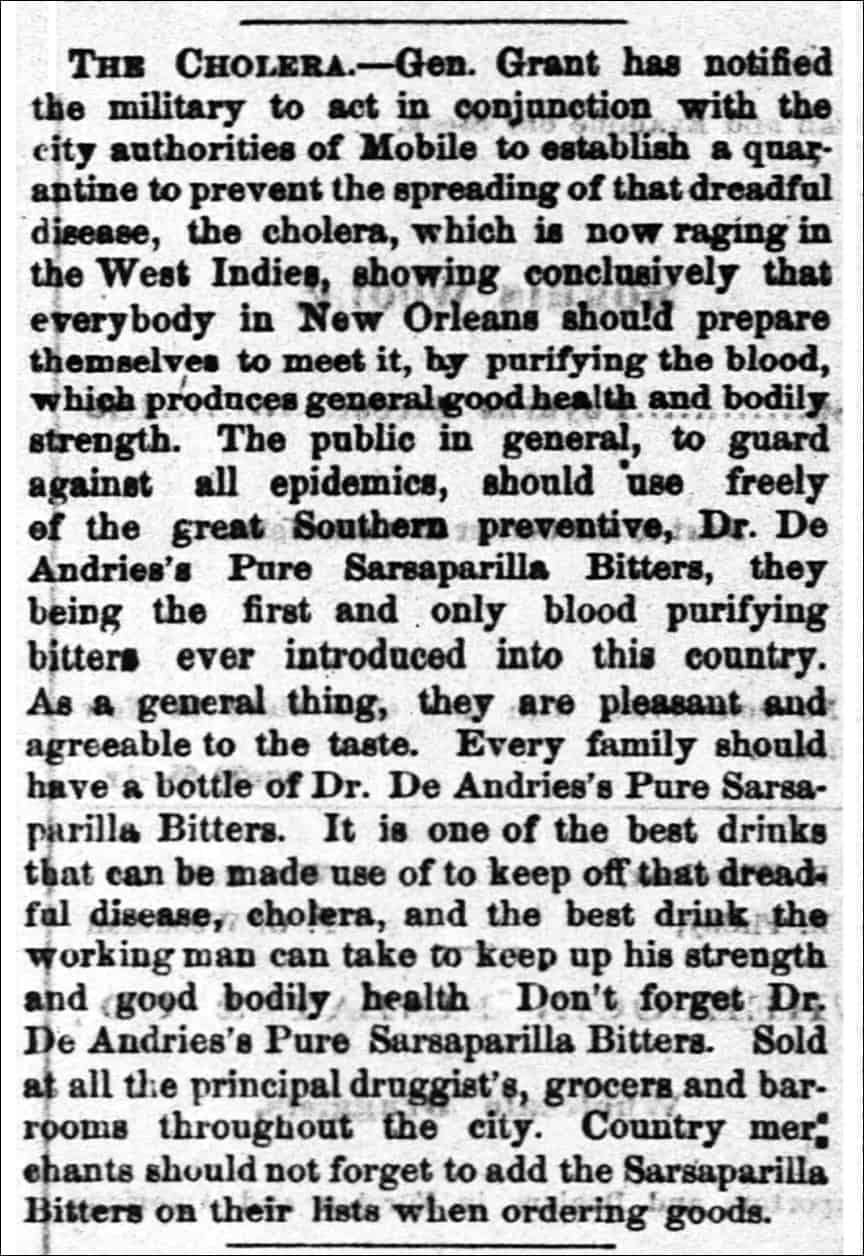 1867:  Full-Page City Directory advertisement (above in post) E.M. Rusha, Dealer in Wines and Liquors, Dr. De Andries Pure Sarsaparilla Bitters, Sold by Grocers and Druggists Throughout the United States, They are the best Preventative of Health ever introduced into this Country. As a general drink they are exhilarating; they give tone to the stomach, being free from all impurities. Try them. E. M. Rusha, Sole Proprietor, Depot, Nos. 63, 65 and 67 Girod Street, New Orleans – New Orleans, Louisiana, City Directory, 1867 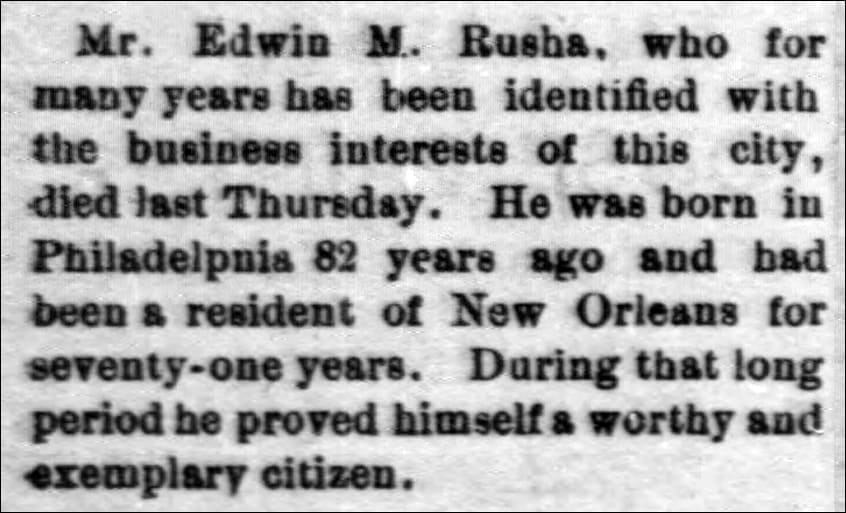