I recently received an email and 1866 newspaper clipping from Mark Wiseman about an unlisted Adler’s Celebrated Anti-Cholera Bitters which led me to do a search for “Adler” information. This led me to another unlisted bitters advertisement for Kohn & Adler’s Bitters from Rock Island, Illinois (see top of post). There is no relation though, as the ad is from 1889. Here we are talking about Solomon and his two sons, Edward and Monroe Kohn and Joseph H. Adler.

Solomon Kohn was born in Austria in 1826 and received his U.S. citizenship in 1866. Adler was born in Bohemia (Dolní Pochlovice, Czech Republic) around 1832. I suspect the families knew each other well and they both came to America together. Margaretha Adler, daughter of Moses Adler and Elisabeth Adler would later marry Salomon Kohn, so there is a pretty solid link. 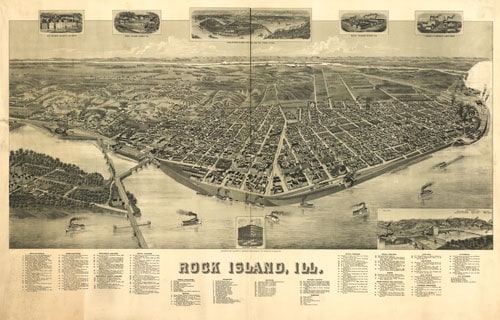 This bird’s-eye view print of Rock Island, Illinois was drawn by Henry Wellge and published by American Publishing Co. in 1889. Rock Island was an industrious town along the Mississippi River. The lumber industry was thriving and railroad interests were growing. Furnishings and supplies for the railroads were manufactured in Rock Island as well as agricultural implements. Most railroad enthusiasts are certainly familiar with the Chicago and Rock Island Railroad.

One listing on the bottom of the print notes Kohn & Adler, Wholesale Liquor Dealers, 122 to 128 16th Street. They were one of the anchor businesses in the city. The illustration below is circa 1865 when Kohn & Adler were just getting started. Maybe that is Solomon and Joseph in the row boat. 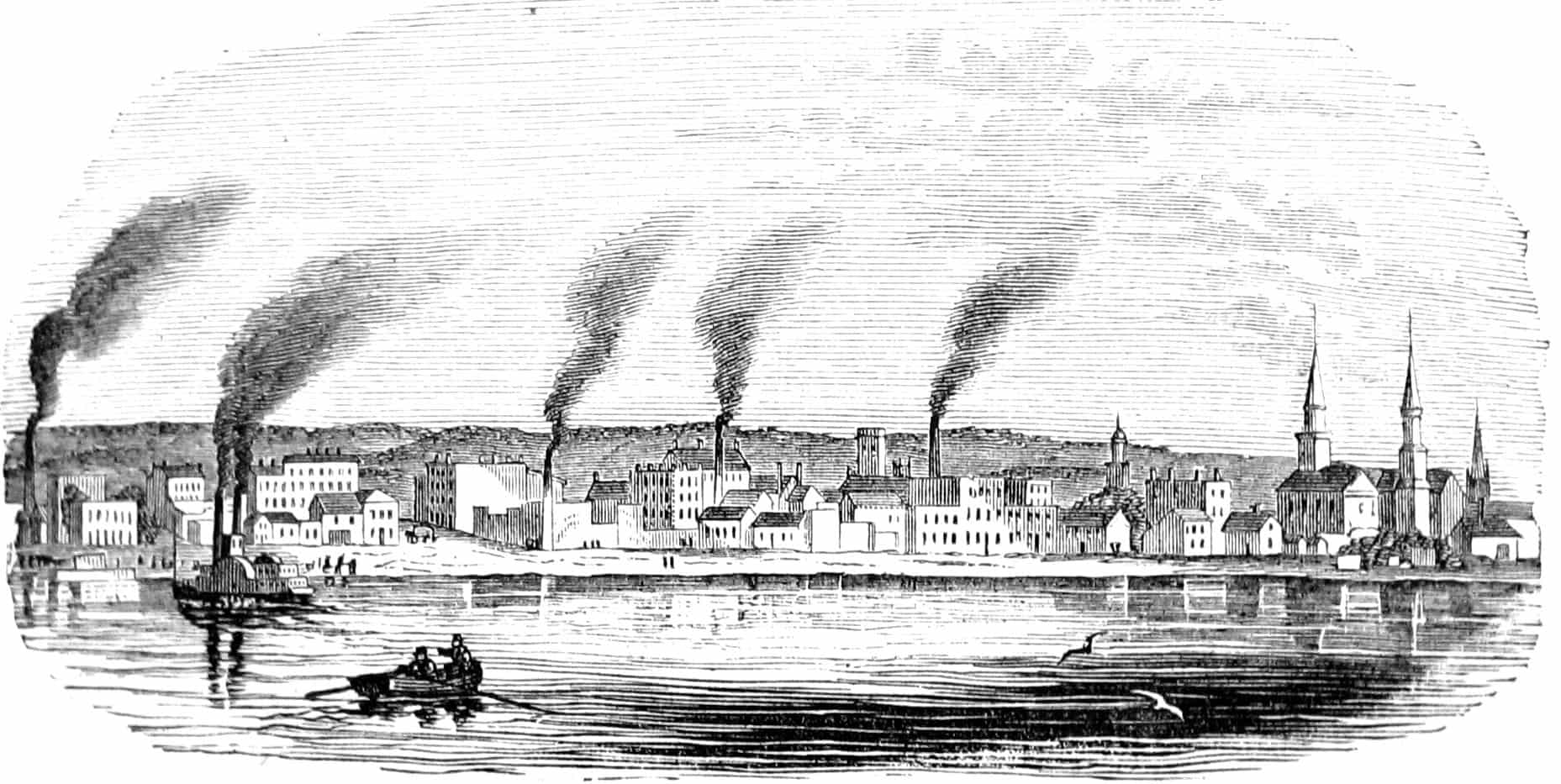 We first find Solomon Kohn listed as a storekeeper in Milwaukee, Wisconsin in 1860 when he was 34 years old. He was probably a merchant long before that. Joseph Adler was a liquor dealer during this same time period though records are scarce for both of them in the early to mid 1860s. War years.

The liquor business of Kohn & Adler was established in Rock Island in 1868 though there was some type of business relationship as early as 1863 when Kohn & Adler were supplying the army for the Confederate States of America. The receipt below shows the sale of paper and ink. 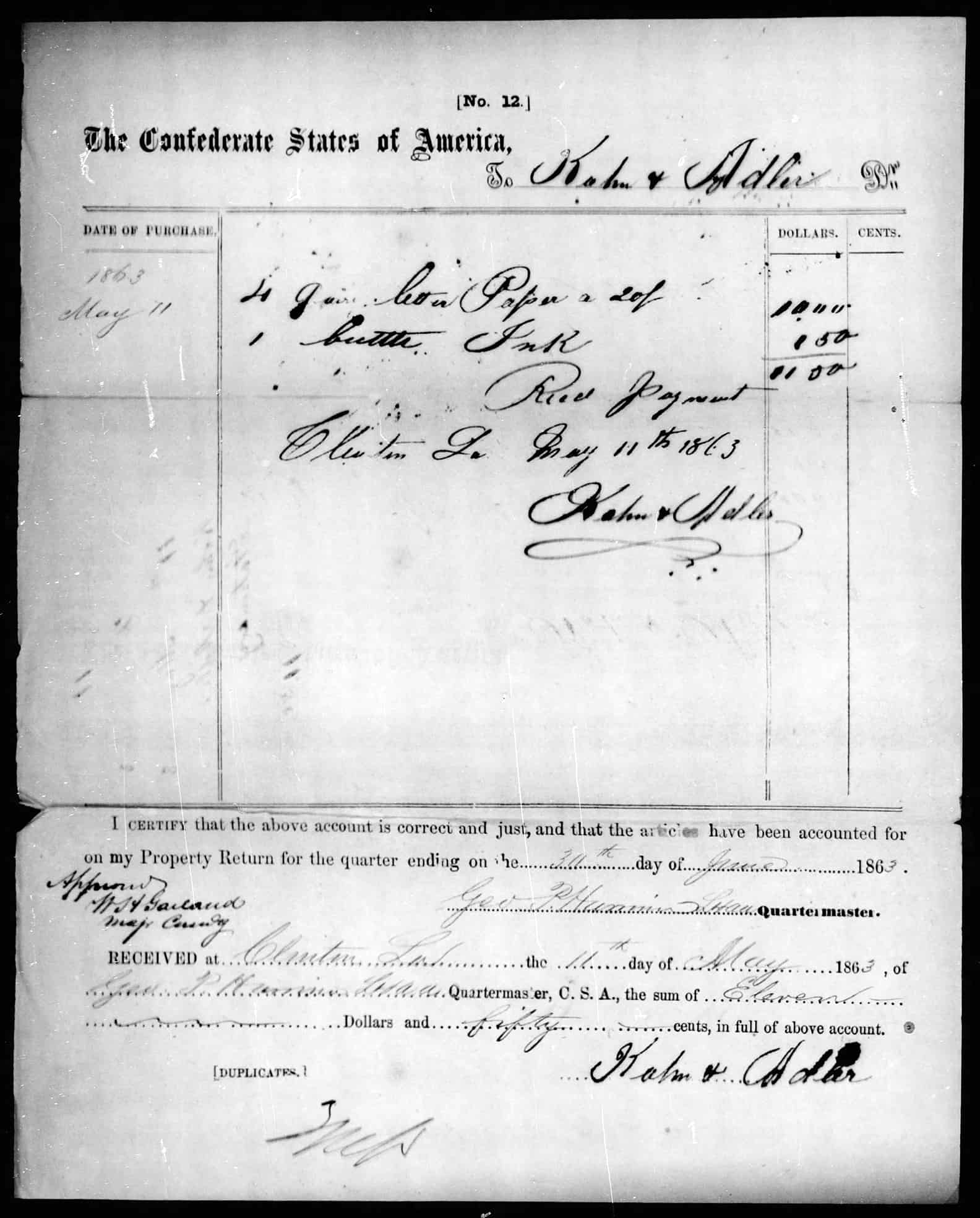 In 1871, a newspaper notice states that “Kohn & Adler have fitted up their store in style, and have this day received a new sign.” I guess the 1868 date was a soft opening. Their address was noted as “opposite Harper House” which was a prominent hotel on 2nd Avenue and 19th  Street built in 1871. 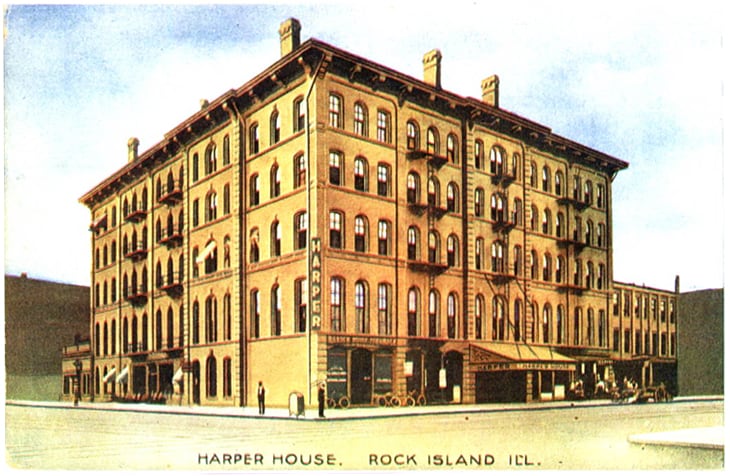 Kohn & Adler thrived throughout the 1870s and 1880s and they served the midwest region of United States. Solomon Kohn would die on November 25, 1874 after a long illness and his son Edward would take his place in the business. By this time they were dealing in all types of spirits and alcohol including whiskies, brandies, gin, rum, wines ands cordials. The full-page directory advertisement below is from the 1868 Holland’s Rock Island City Directory. 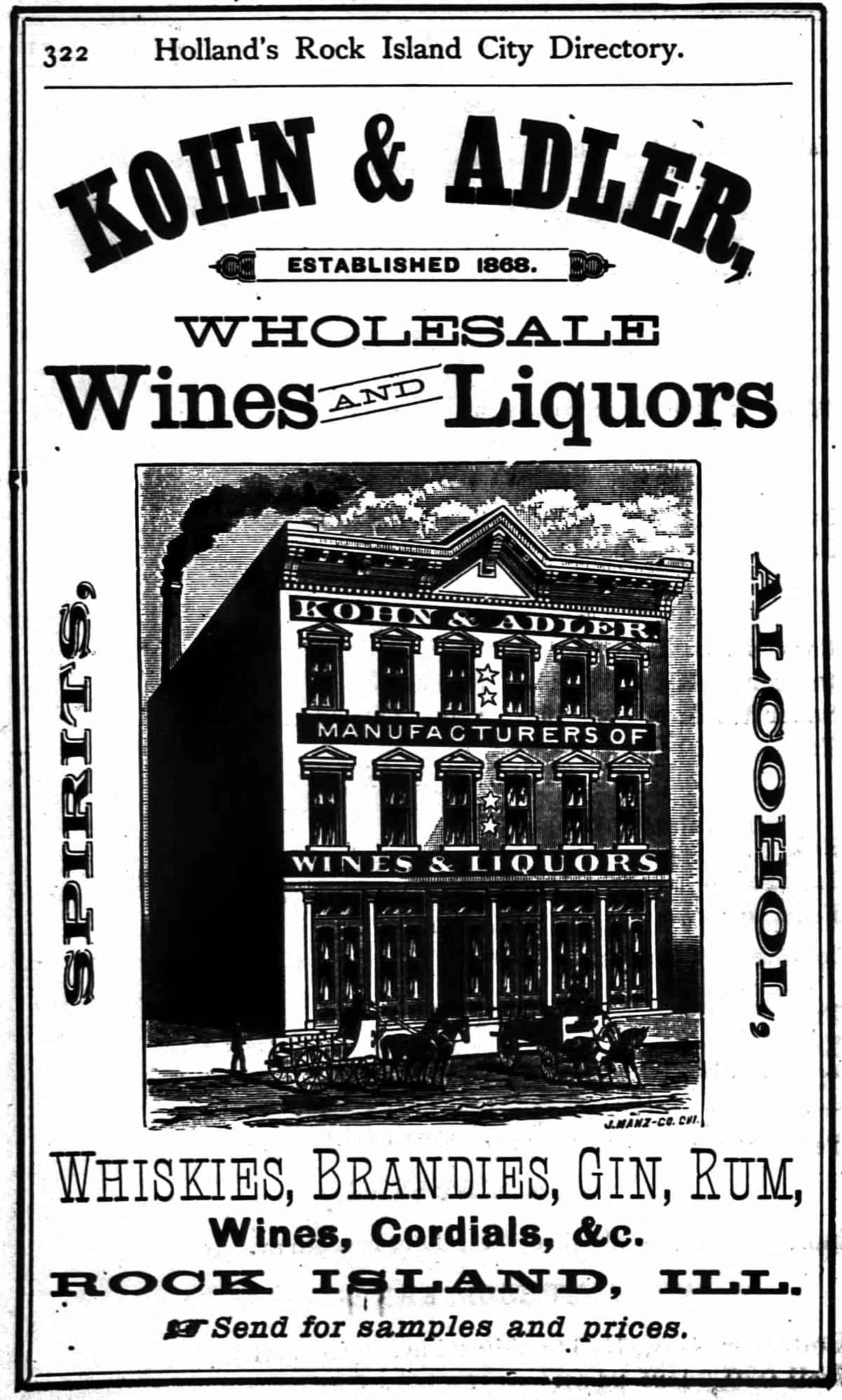 In 1888, some type of odd legal action occurred between Kohn & Adler and M. Levy & Son, a competitor in Rock Island. Seems like you had two companies competing for mail which of course contained liquor order information and payments.

In 1889, they advertised their Kohn & Adler’s Bitters as a medicine “To Cure Spring Fever.” You could buy it for $1.50 a gallon. This sounds like a stoneware jug. I am not aware of any examples of bottles or jugs. Kohn & Adler were then located on the “Post Office Block” on Second Avenue & 16th Street. 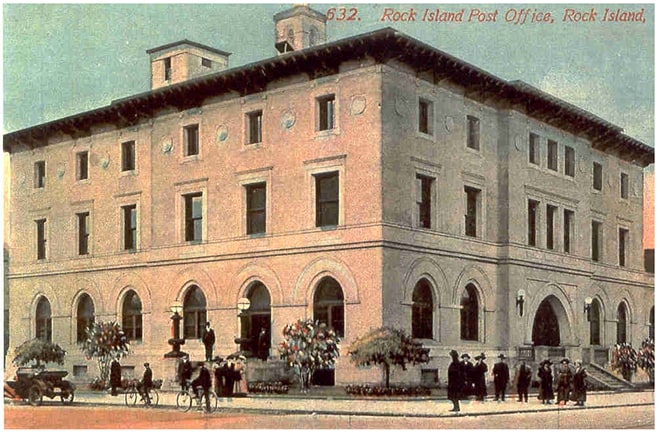 Later in 1889 the partnership would dissolve by mutual consent, Joseph H. Adler was retiring, and Monroe Kohn would continue the business under the old name of Kohn & Adler until 1894, when the business would shut down. 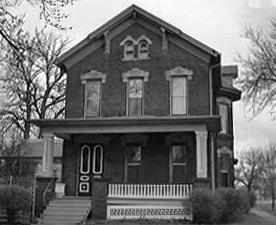 Architectural Style: Italianate, Construction Date: ca. 1878-80. Ornate Brick Italianate
This front gable Italianate structure is constructed of brick. Rarely are Rock Island’s 19th century homes constructed of brick, and then they are usually of this Italianate style. The Kohn-Bradford house features brackets, stone hoods above the windows and a cut stone foundation. The front porch is an early alteration, probably around 1906. There is a one-story addition on the rear that was added around 1900 for a doctor’s office. This office mimicked the main house with two over two windows, brick arches and virtually identical brick.

Succession of Owners: Margaret Kohn, a widow, and her sons Edward, Lewis, Max and Monroe, first occupied this home. The Kohn family operated Kohn & Adler, one of the largest distributors of fine wine and liquor in the Upper Midwest. 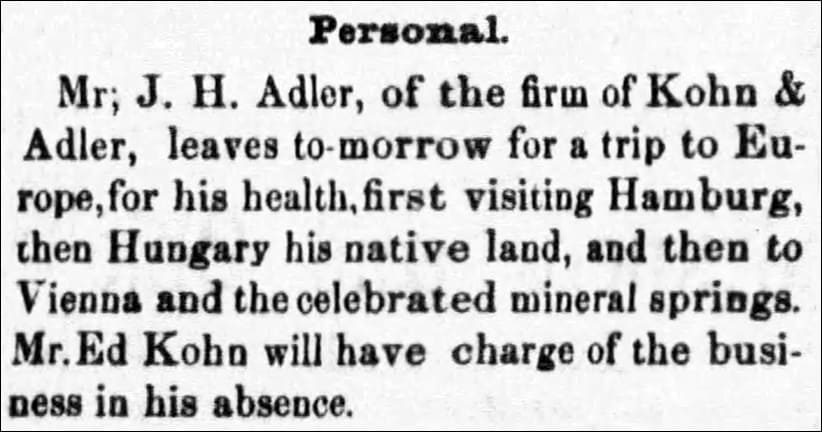 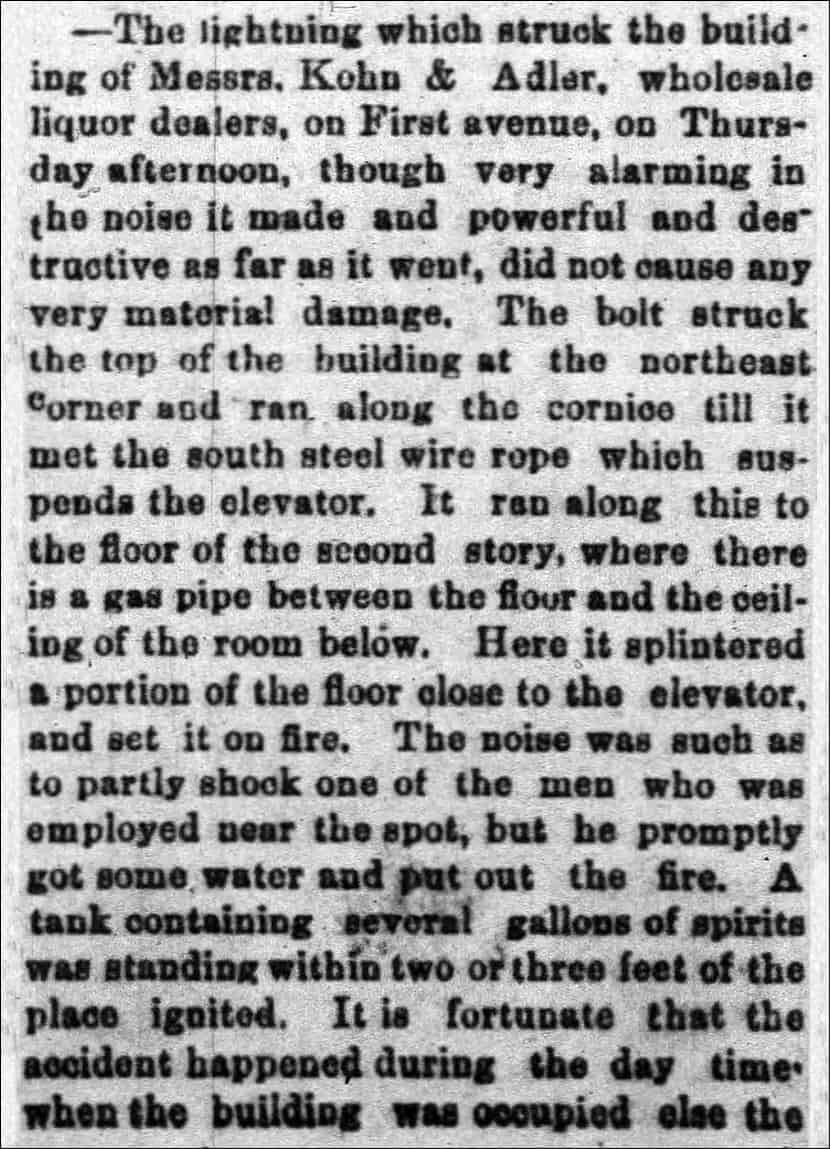 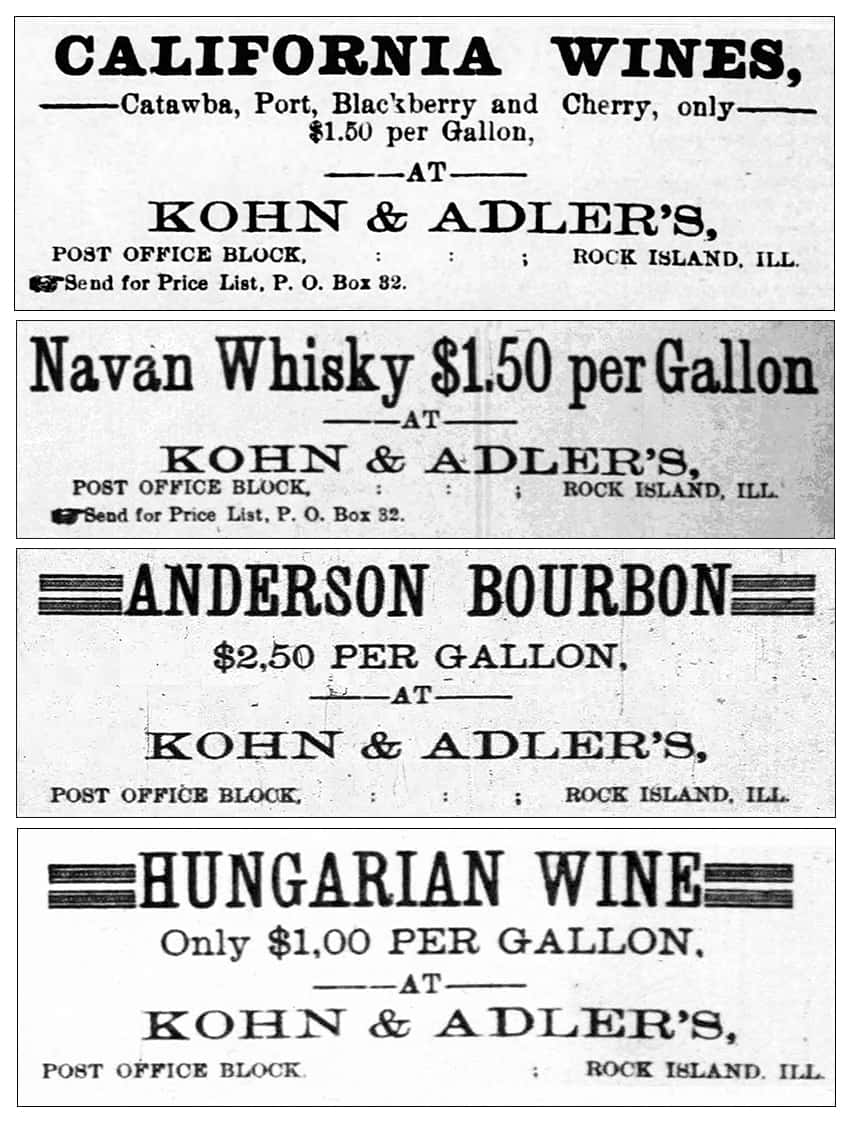 1889: Newspaper notice (below): The firm of Kohn and Adler has been dissolved by mutual consent, J.H. Adler retiring, and Monro Kohn continuing the business under the old name of Kohn & Adler – The Moline Review, Dispatch, Friday, July 5, 1889 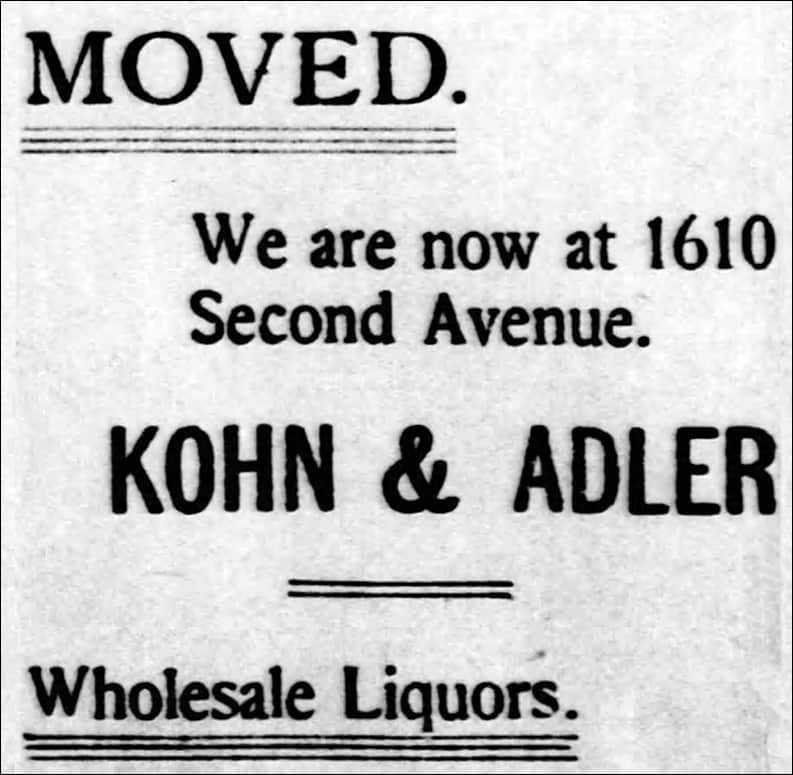