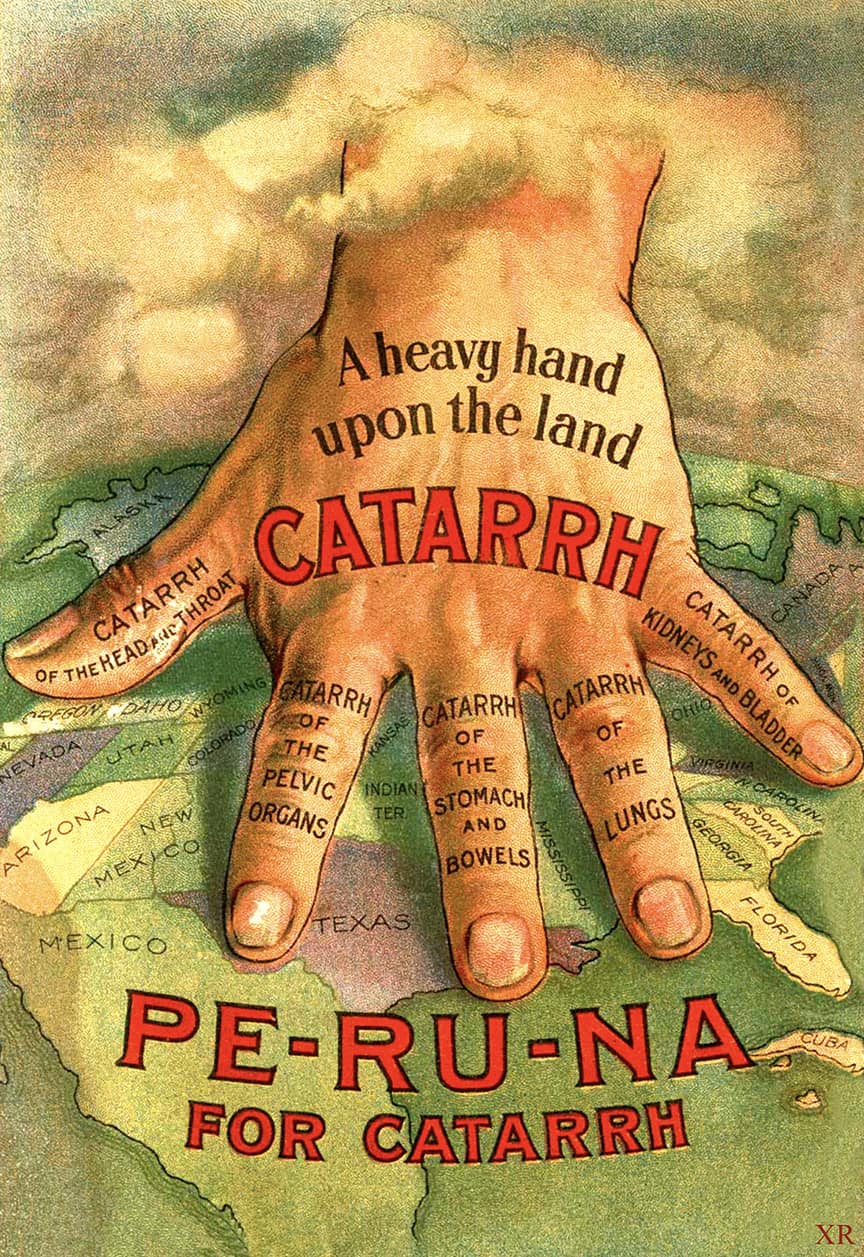 Yesterday, I put together a post on TO-NI-TA which reminded me of PE-RU-NA. Early 1900 fraudulent medicines with similar graphics treatment in their names, similar bottles, and the same time period.

The top graphics in this post were found in the Library of Congress records and the bottle picture was submitted by Steve Ketcham. Next, I found this real interesting piece below in Collier’s Weekly from October 28, 1905 by Samuel Hopkins Adams. ⁠Peruna was put out by Dr. S. B. Hartman of Mishler’s Herb Bitters fame. 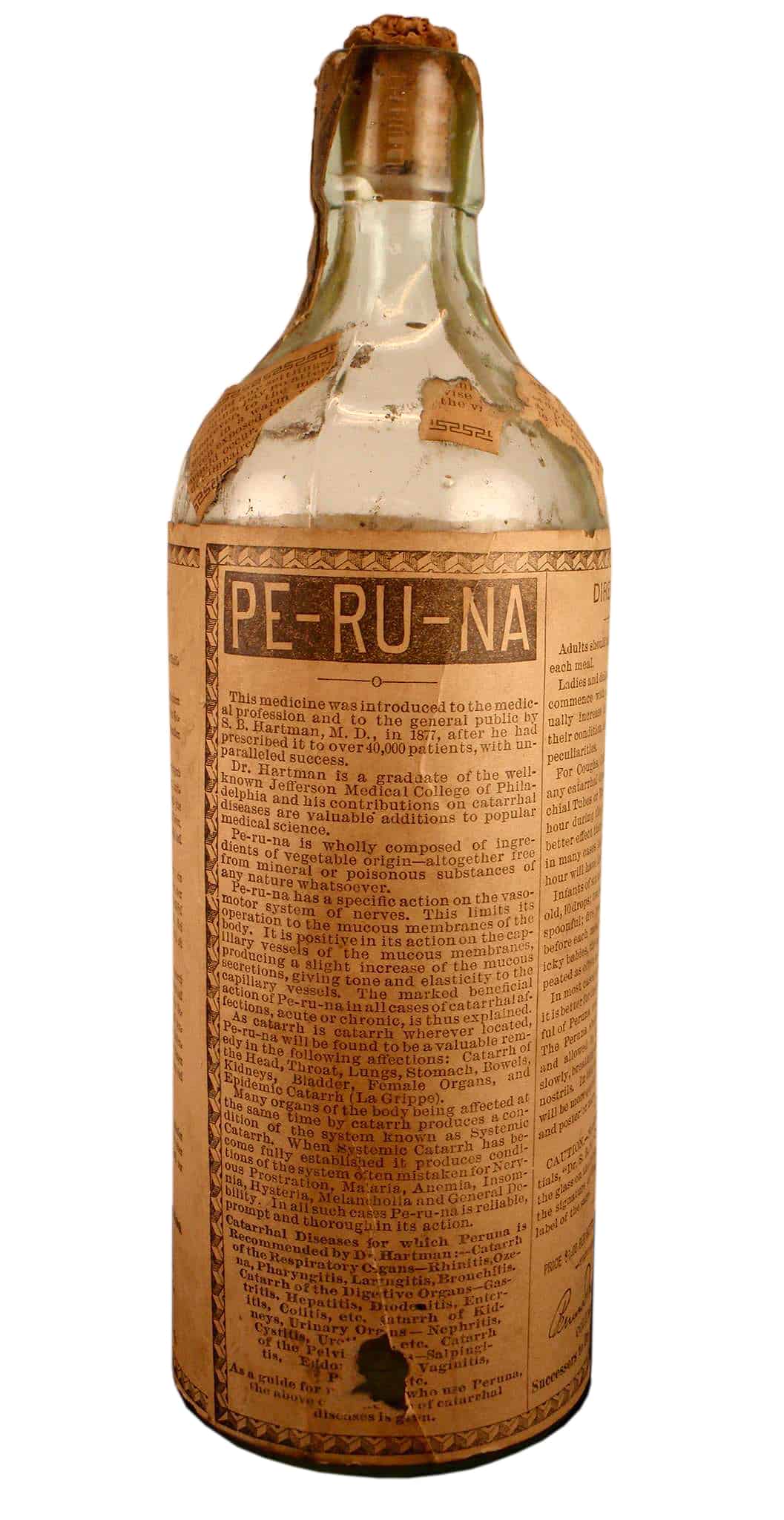 THE GREAT AMERICAN FRAUD: Articles on the Nostrum Evil and Quacks  (1907)

II. – PERUNA AND THE BRACERS

⁠A distinguished public health official and medical writer once made this jocular suggestion to me:

⁠”Let us buy in large quantities the cheapest Italian vermouth, poor gin and bitters. We will mix them in the proportion of three of vermouth to two of gin, with a dash of bitters, dilute and bottle them by the short quart, label them ‘Smith’s Reviver and Blood Purifier; dose, one wineglassful before each meal’; advertise them to cure erysipelas, bunions, dyspepsia, heat rash, fever and agne, and consumption; and to prevent loss of hair, smallpox, old age, sunstroke and near-sightedness, and make our everlasting fortunes selling them to the temperance trade.”

⁠”That sounds to me very much like a cocktail,” said I.

⁠”So it is,” he replied. “But it’s just as much a medicine as Peruna, and not as bad a drink.”

⁠Peruna, or, as its owner, Dr. S. B. Hartman [editor note: Mishler’s Herb Bitters fame], of Columbus, Ohio (once a physician in good standing), prefers to write it, Pe-ru-na, is at present the most prominent proprietary nostrum in the country. It has taken the place once held by Green’s Nervura and by Paine’s Celery Compound, and for the same reason which made them popular. The name of that reason is alcohol*. Peruna is a stimulant pure and simple, and it is the more dangerous in that it sails under the false colors of a benign purpose.

⁠According to an authoritative statement given out in private circulation a few years ago by its proprietors, Peruna is a compound of seven drugs with cologne spirits. The formula, they assure me, has not been materially changed. None of the seven drugs is of any great potency. Their total is less than one-half of 1 per cent of the product. Medicinally they are too inconsiderable, in this proportion, to produce any effect. There remains to Peruna only water and cologne spirits, roughly in the proportion of three to one. Cologne spirits is the commercial term of alcohol.

What Peruna is Made of.

⁠Any one wishing to make Peruna for home consumption may do so by mixing half a pint of cologne spirits, 190 proof, with a pint and a half of water, adding thereto a little cubebs for flavor and a little burned sugar for color. Manufactured in bulk, so a former Peruna agent estimates, its cost, including bottle and wrapper, is between fifteen and eighteen cents a bottle. Its price is $1.00. Because of this handsome margin of profit, and by way of making hay in the stolen sunshine of Peruna advertising, many imitations have sprung up to harrass the proprietors of the alcohol-and-water product. Pe-ru-vi-na, P-ru-na, Purina, Anurep (an obvious inversion); these, bottled and labeled to resemble Peruna, are self-confessed imitations. From what the Peruna people tell me, I gather that they are dangerous and damnable frauds, and that they cure nothing.

Similarly, malaria, one may guess, is catarrh of the mosquito that bit you. Other disease not specifically placed in the catarrhal class, but yielding to Peruna (in the book), are colic, mumps, convulsions, neuralgia, women’s complaints and rheumatism. Yet “Peruna is not a cure-all,” virtuously disclaims Dr. Hartman, and grasps at a golden opportunity by advertising his nostrum as a preventative against yellow fever! That alcohol and water, with a little coloring matter and one-half of 1 per cent. of mild drugs, will cure all or any of the ills listed above is too ridiculous to need refutation. Nor does Dr. Hartman himself personally make the claim for his product. He stated to me specifically and repeatedly that no drug or combination of drugs, with the possible exception of quinin for malaria, will cure disease. His claim is that the belief of the patient in Peruna, fostered as it is by the printed testimony, and aided by the “gentle stimulation,” produces good results. It is well established that in certain classes of disease the opposite is true. A considerable proportion of tuberculosis cases show a history of the Peruna type of medicine taken in the early stages, with the result of diminishing the patient’s resistant power, and much of the typhoid in the middle west is complicated by the victim’s “keeping up” on the stimulus long after he should have been under a doctor’s care. But it is not as a fraud on the sick alone that Peruna is baneful, but as the maker of drunkards also.

⁠”It can be used any length of time without acquiring a drug habit,” declares the Peruna book, and therein, I regret to say, lies specifically and directly. The lie is ingeniously back up by Dr. Hartman’s argument that “nobody could get drunk on the prescribed doses of Peruna.”

⁠Perhaps this is true, though I note three wineglassfuls in forty-five minutes as a prescription, which might temporarily alter a prohibitionist’s outlook on life. But what makes Peruna profitable to the maker and a curse to the community at large is the fact that the minimum dose first ceases to satisfy, then the moderate dose, and finally the maximum dose; and the unsuspecting patron, who began with it as a medicine, goes on to use it as a beverage, and finally to be enslaved by it as a habit. A well-known authority on drug addictions writes me:

⁠”A number of physicians have called my attention to the use of Peruna, both preceding and following alcohol and drug addictions. Lydia Pinkham’s Compound is another dangerous drug used largely by drinkers; Pain’s Celery Compound also. I have in the last two years met four cases of persons who drank Peruna in large quantities to intoxication. This was given to them originally as a tonic. They were treated under my care as simple alcoholics.”

The Government Forbids the Sale of Peruna to Indians

⁠Expert opinion on the non-medical side is represented in the government order to the Indian Department, reproduced on the following page, the kernel of which is this:

⁠”In connection with this investigation, please give particular attention

⁠*Dr. Ashbel P. Grinnell of New York City, who has made a statistical study of patent medicines, asserts as a provable fact that more alcohol is consumed in this country in patent medicines than is dispensed in a legal way by licensed liquor venders, barring the sale of ales and beer. 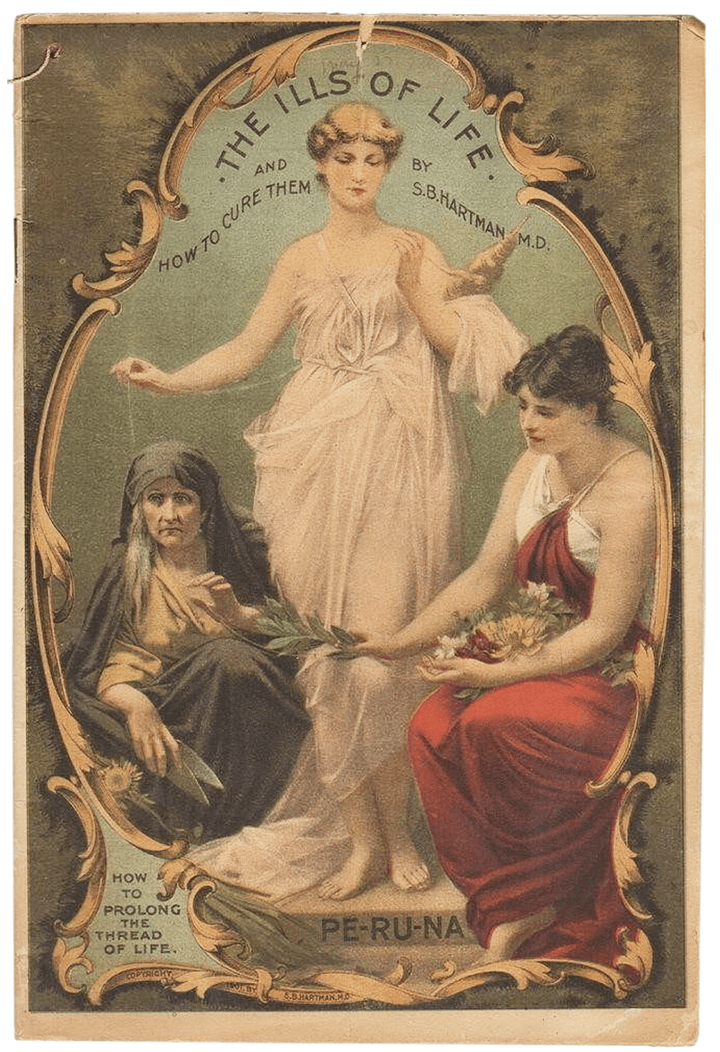 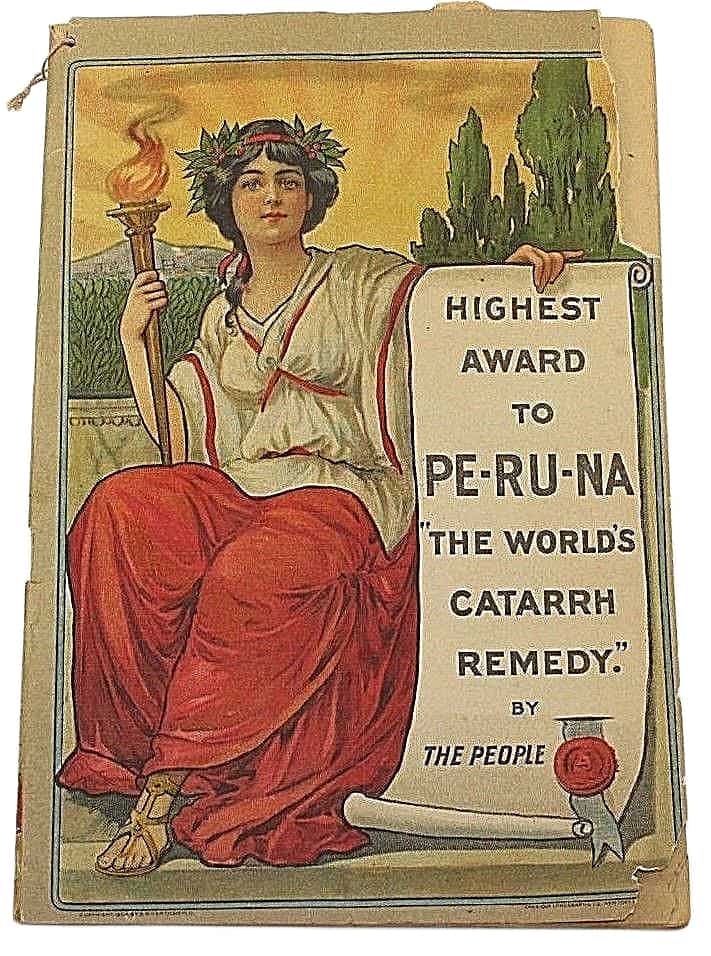 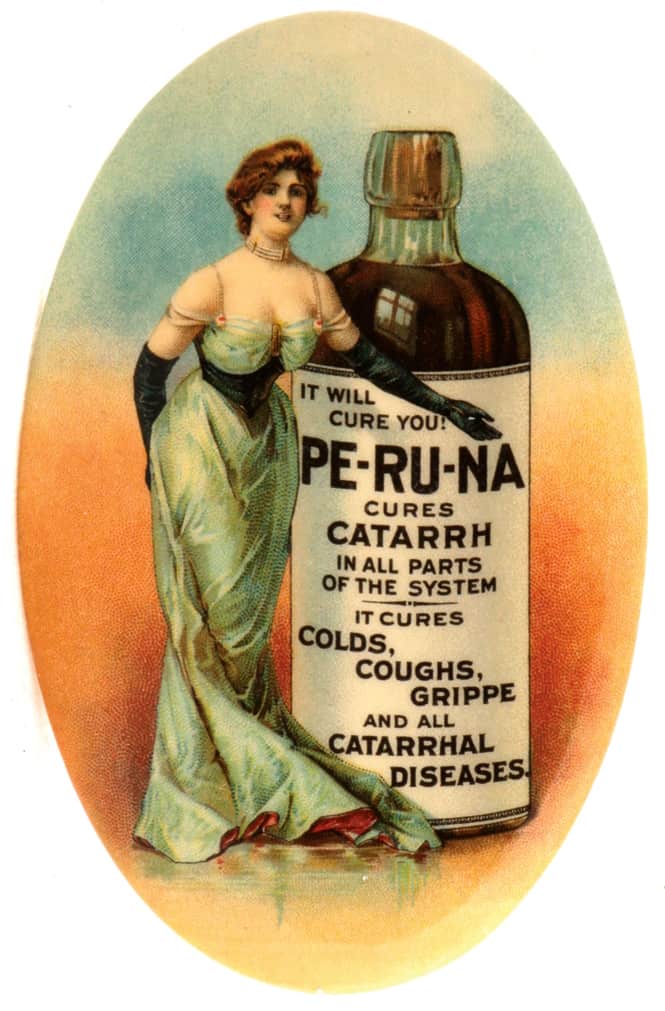 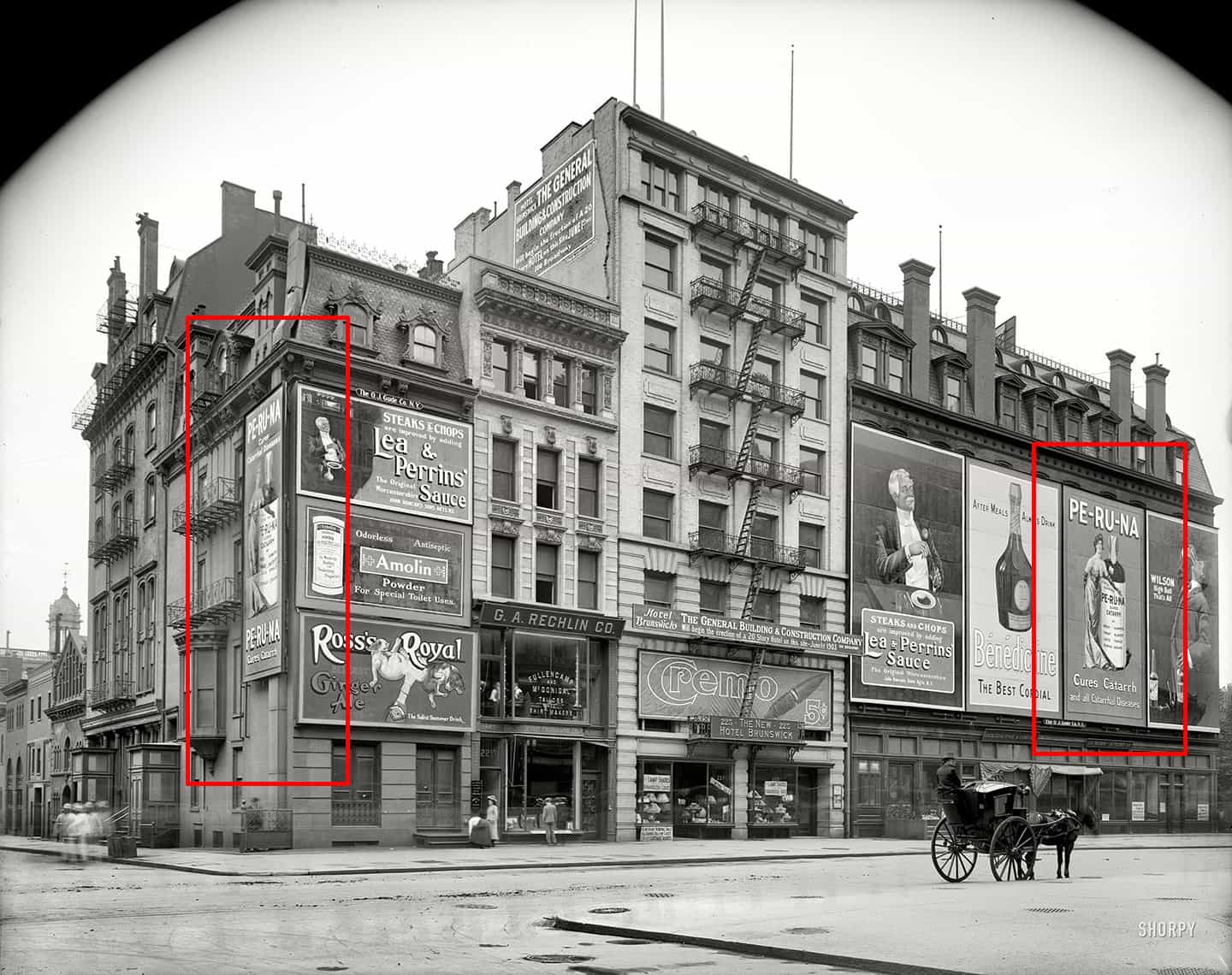 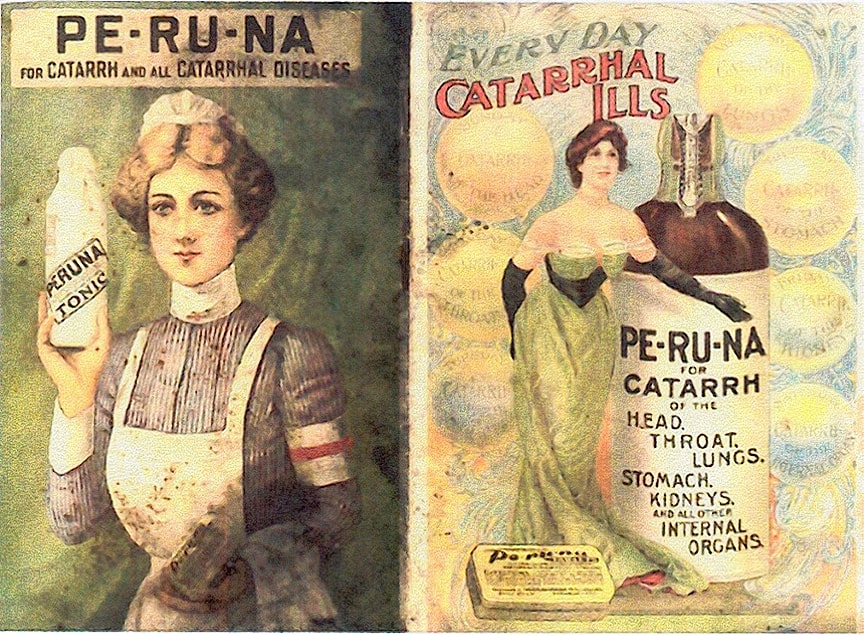 Ferdinand Meyer V is a native of Baltimore, Maryland and has a BFA in Fine Art and Graphic Design from the Kansas City Art Institute and School of Design. Ferdinand is the founding Principal of FMG Design, a nationally recognized design consultation firm. Ferdinand is a passionate collector of American historical glass specializing in bitters bottles, color runs and related classic figural bottles. He is married to Elizabeth Jane Meyer and lives in Houston, Texas with their daughter and three wonderful grandchildren. The Meyers are also very involved in Quarter Horses, antiques and early United States postage stamps. Ferdinand is the past 6-year President of the Federation of Historical Bottle Collectors and is one of the founding members of the FOHBC Virtual Museum.
View all posts by Ferdinand Meyer V →
This entry was posted in Advertising, Article Publications, Bitters, History, Medicines & Cures, Publications, Scams & Frauds and tagged bitters, Catarrh, Collier's Weekly, columbus, Dr. Ashbel P. Grinnell, Dr. S. B. Hartman, Fraud, Mishler, Nostrum, ohio, PE-RU-NA, Peruna, quack, Samuel Hopkins Adams. Bookmark the permalink.