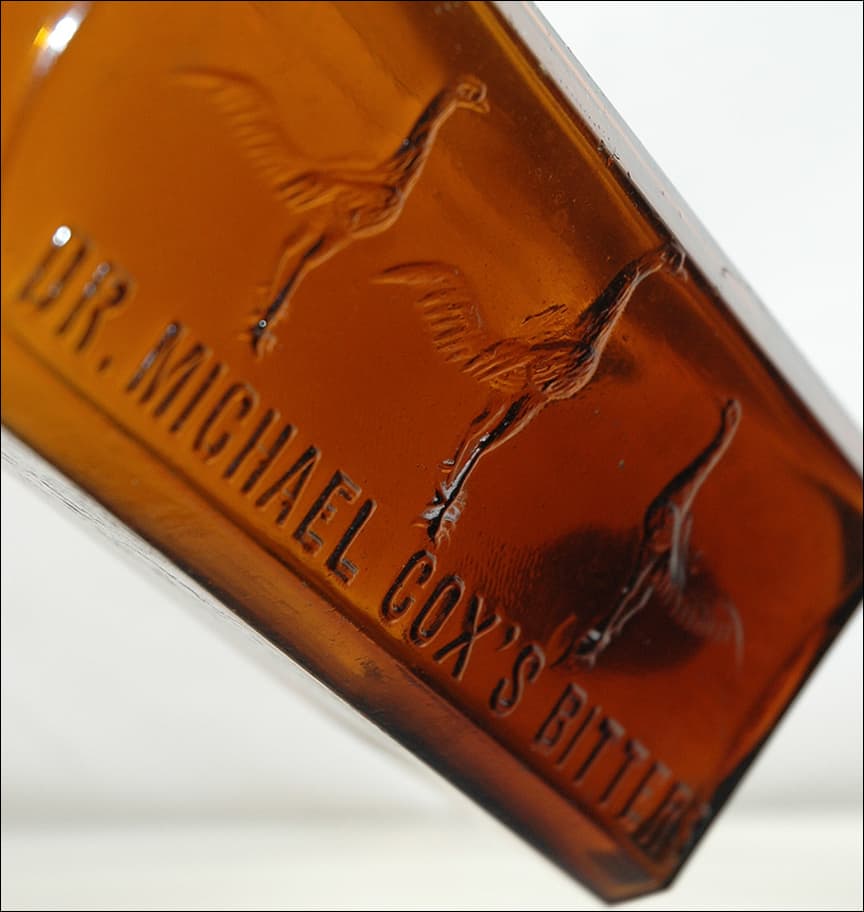 I’d forgotten about my Dr. Michael Cox’s Bitters with the three embossed cocks until somebody posted a picture of an example on PRG Facebook the other day. What a cool bottle. I always thought it was from New Orleans around 1885 but it is really from Pittsburgh, Pennsylvania and a really late, tooled lip bottle. So late, the proprietor Herman Obernauer could have people place orders for his bitters by phone!

According to Bitters Bottles, the label reads, “Dr. Michael Cox’s Brand Stomach Bitters, H. Obernauer, Pittsburgh” and pictures three fighting cocks. Need to find a labeled example. I suppose the cocks are a graphics representation of the name Cox. Don’t know who Dr. Cox was of if he really existed. 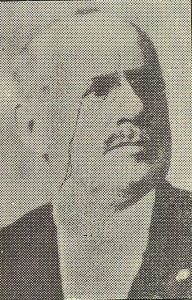 Hermann Obernauer was born in Württemberg, in southern Germany in 1856 and spent his late teens and early twenties traveling throughout Europe as a salesman. He came to America in 1880 and settled in Pittsburgh. 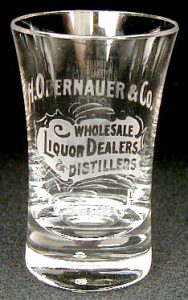 You can also see a neat picture taken in May 1911 of his liquor establishment at the corner of Fifth and Stevenson below. He adorned the sides of the building with painted whiskey bottle graphics for Berthana Medicated Wine, Belle of Pittsburg Whiskey and H.O. Brown Gin, the latter two being patented products from the distillery he operated. If you look closely, you can see his stacked bottles on display in his storefront windows.

In May of 1902, we see the first advertisements for Dr. Michael Cox’s Bitters as a cure for stomach and kidney problems. The same ads appear in 1903 with a telephone 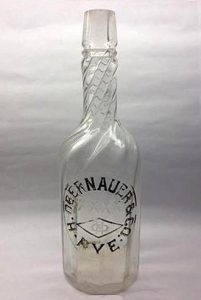 number. H. Obernauer & Co. were listed as Sole Agents and said the bitters were available at all druggists and saloons. This surprises me a little bit as I thought the product was on the street in the late 1800s. Usually when you have a signature brand, you advertise the first opportunity you get. Obernauer sold his business in 1915 – several years before the enactment of Prohibition – and spent the rest of his career in real estate.

Hermann Obernauer was a member of the Rodef Shalom Congregation 66 years and founder often Beneficial Society of Pittsburgh and Allegheny County. He was also a member of Pittsburgh Lodge No. 11 of the Elks, William Tell Lodge No. 44 of the Odd Fellows, the B’nai B’rith and the fraternal, civic and welfare societies. Oberhauer would die on the evening of 09 Febuary 1947 after a brief illness. He was 91. 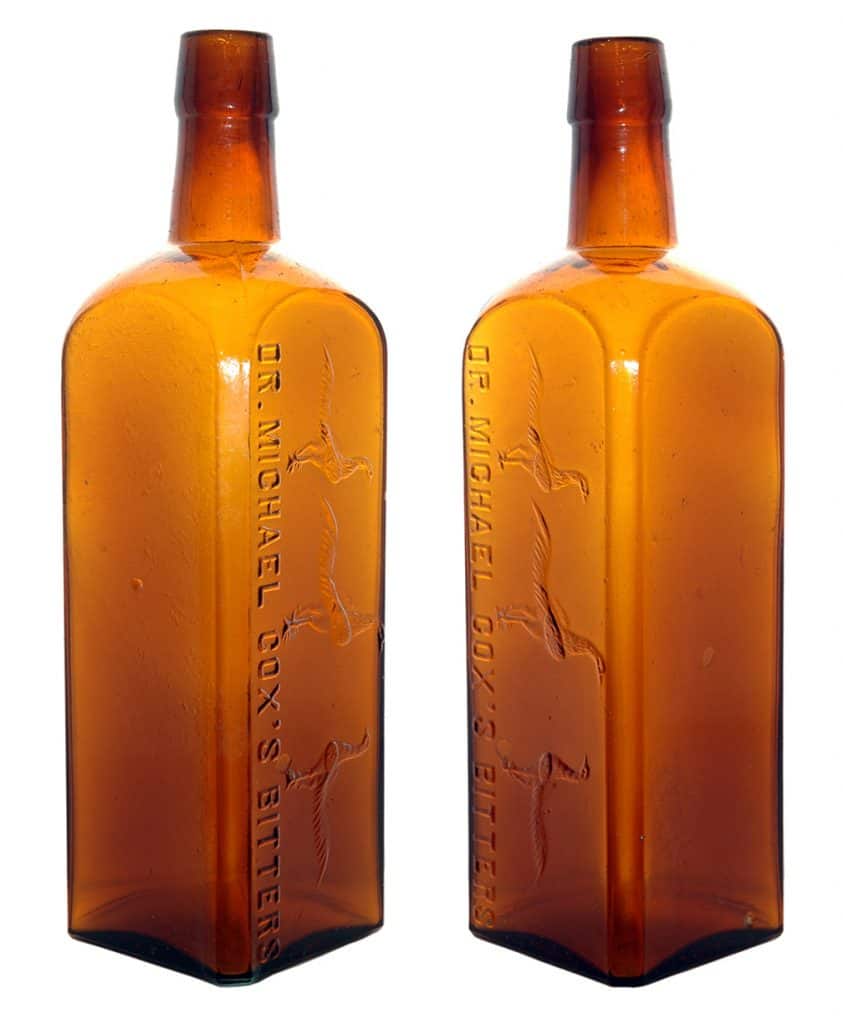 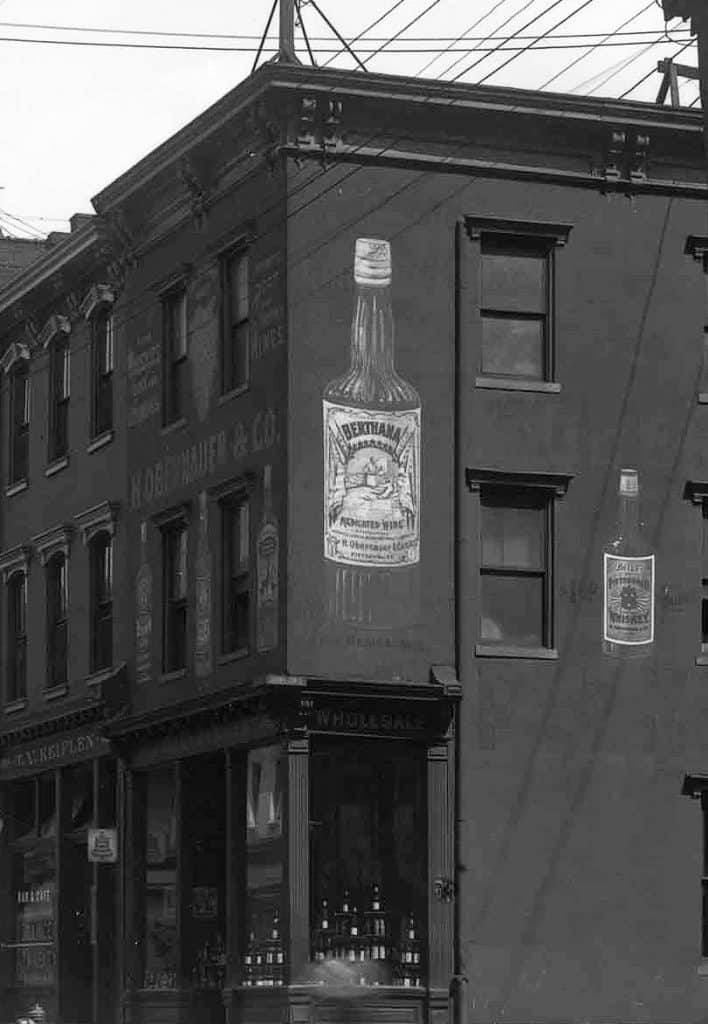 1856: Hermann Obernauer was born in Württemberg, in southern Germany in 1856.

1876: Herman Obernauer was discharged from military duty in his native Germany on 22 July 1876. – The Obernauer Family – Rauh Jewish Archives 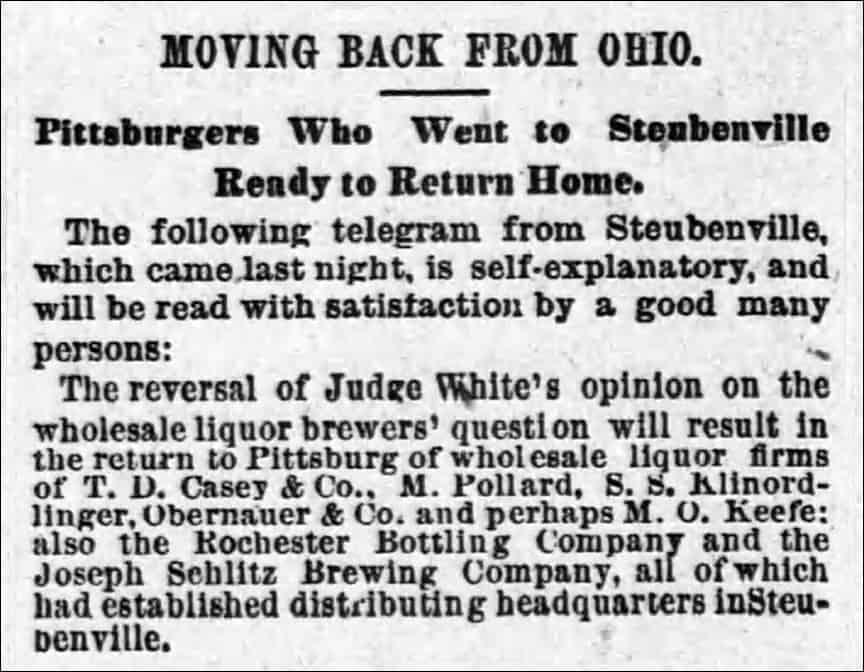 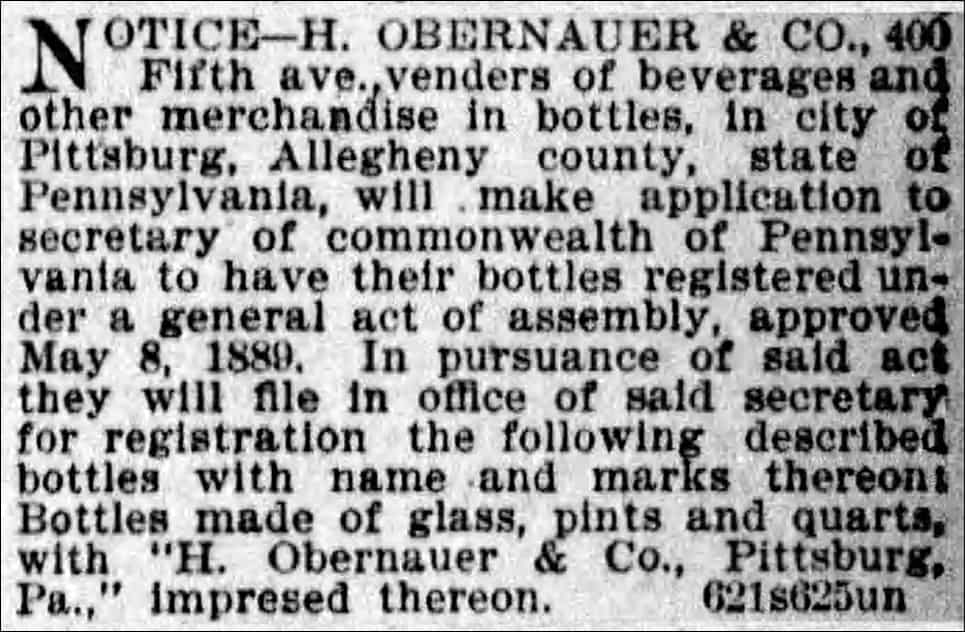 1895: Personal Notice H. Obernauer to give away free bottle of wine or liquor – The Pittsburgh Press, Sunday, June 30 1895 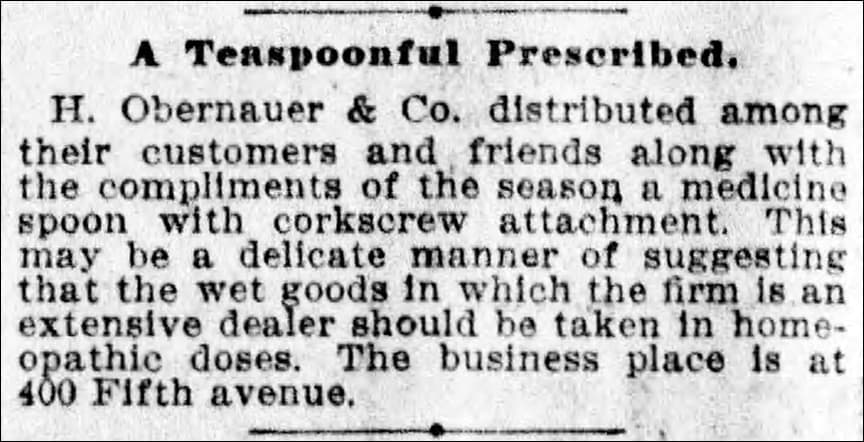 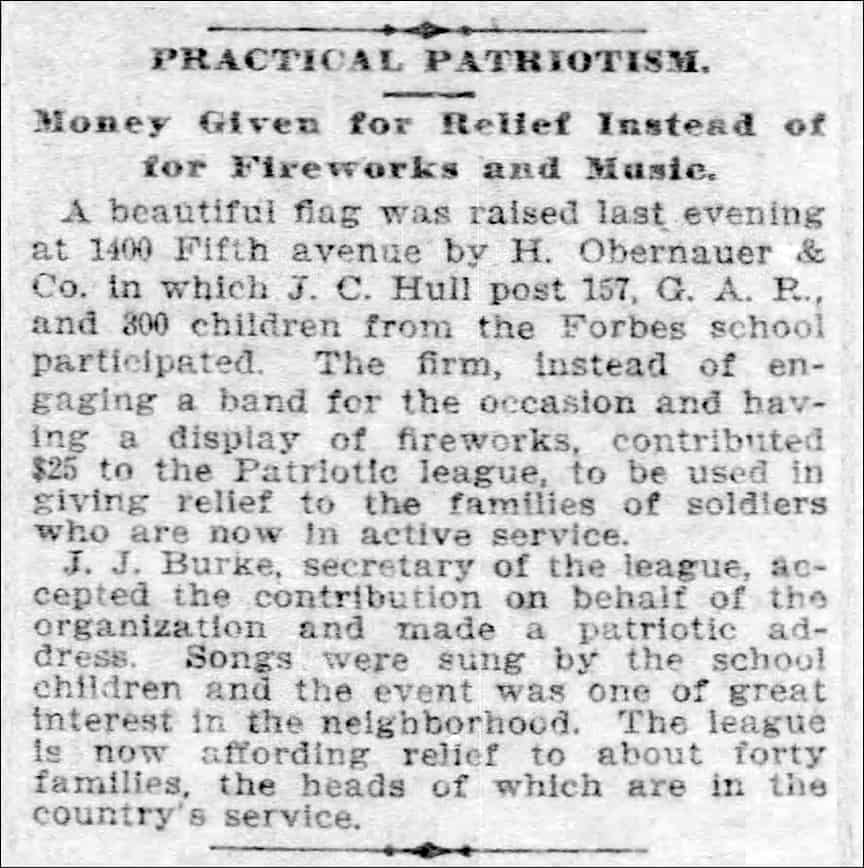 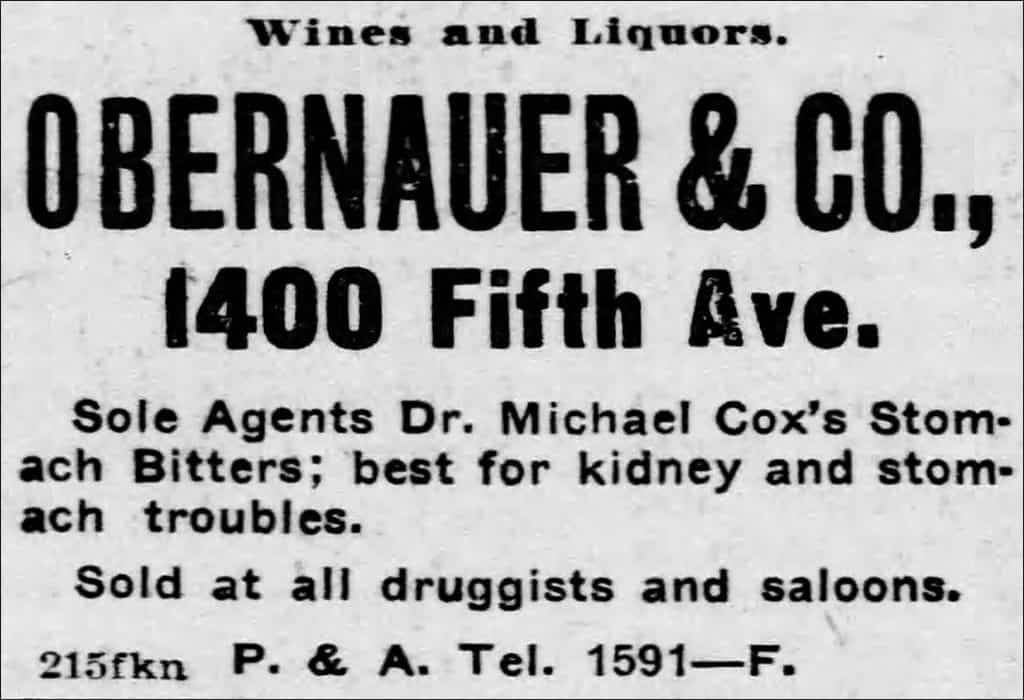 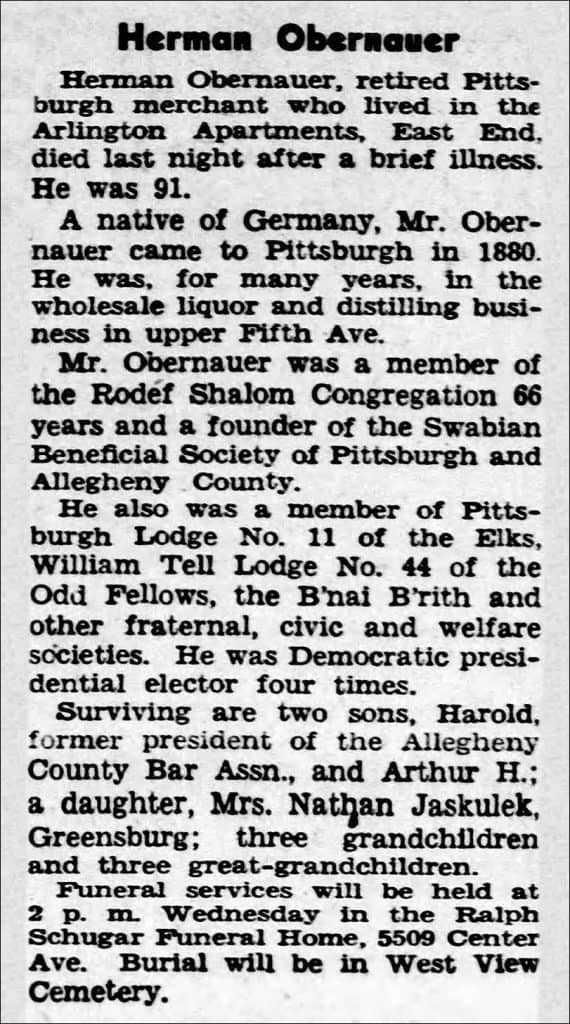 Ferdinand Meyer V is a native of Baltimore, Maryland and has a BFA in Fine Art and Graphic Design from the Kansas City Art Institute and School of Design. Ferdinand is the founding Principal of FMG Design, a nationally recognized design consultation firm. Ferdinand is a passionate collector of American historical glass specializing in bitters bottles, color runs and related classic figural bottles. He is married to Elizabeth Jane Meyer and lives in Houston, Texas with their daughter and three wonderful grandchildren. The Meyers are also very involved in Quarter Horses, antiques and early United States postage stamps. Ferdinand is the past 6-year President of the Federation of Historical Bottle Collectors and is one of the founding members of the FOHBC Virtual Museum.
View all posts by Ferdinand Meyer V →
This entry was posted in Advertising, Bitters, History, liquor, Liquor Merchant, Medicines & Cures, Spirits and tagged bitters, cox, Germany, Herman, Hermann, liquor, michael, Obernauer, Pennsylvania, Pittsburgh, Stomach, Whiskey, wholesale, Wine. Bookmark the permalink.