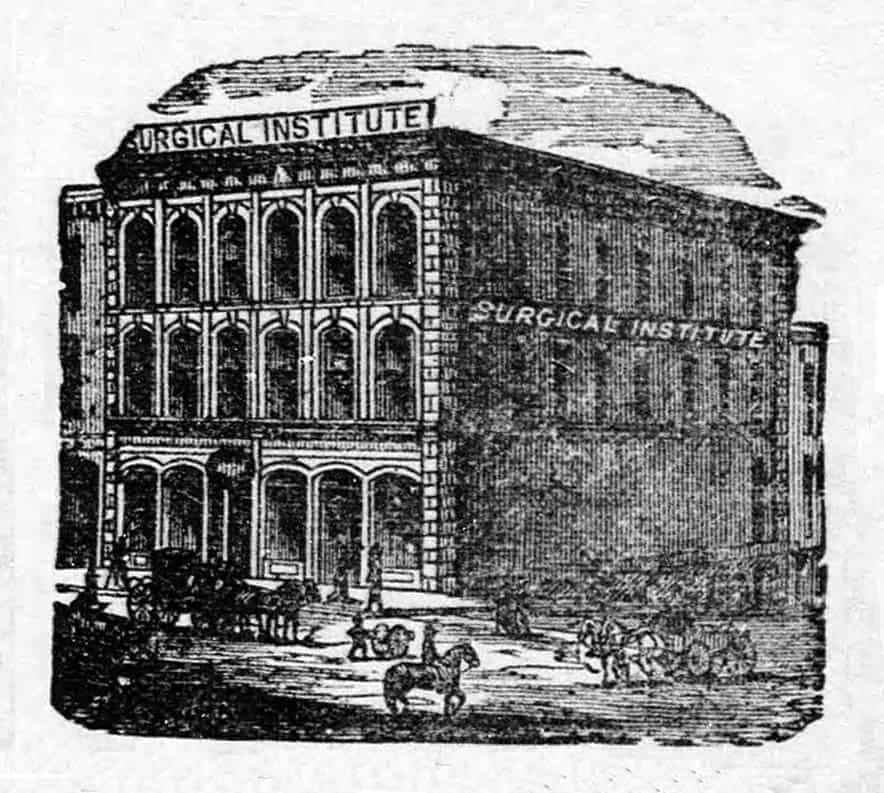 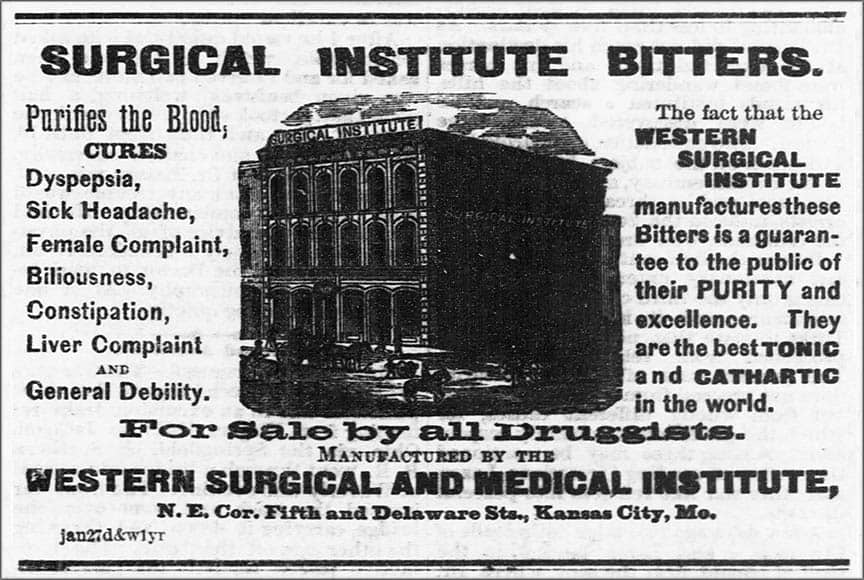 Here is reference to an unlisted bitters called the Surgical Institute Bitters. Yesterday, when I found this advertisement shown above, I immediately thought we might be talking about the same fellows who put out the famous “Kansas City Indian Queen Bitters”. I was right. Only two examples of this figural queen bottle are known. An example is pictured below.

You see in 1873, Dr. D’Estaing Dickerson and Dr. John Stark founded the Western Surgical Institute in Kansas City, under the incorporate laws of the State of Missouri.  This enterprise proved a financial as well as professional success with patients coming from New Mexico, Texas, Colorado, Indian Territory, Nebraska, and adjacent States. They claimed in advertising to being the only institution west of the Mississippi that provided steam-propelled movement cure, that being the most modern treatment for the cure of paralytics. They claimed to perform difficult surgical operations daily. In some references the business is called the Kansas City Surgical Institute.

I would suspect that the Surgical Institute Bitters was the same as Indian Herb Bitters or related in some way. Probably a generic, less expensive version for patients sat the institute. The guys formed the Indian Herb Bitters Company as a commercial venture to sell the queens.

Drs. John Stark and D. E. Dickerson of the Western Surgical Institute of Kansas City. Dr. Stark was born in Coatbridge, Scotland, December 20, 1841. He graduated from the Royal College of Glasgow, Scotland, and came to the United States in 1863, stopping in New York, when he was commissioned assistant surgeon in the United States Army. Served four years, and for three years of that time had charge of the United States Army Hospital, at Fort Mohave, Arizona. In 1867 he returned to Europe, and while in Glasgow, Scotland, received the appointment of surgeon for the Anchor Line of Trans-Atlantic Mail Steamships. In 1868 he came to Kansas City, when, in 1873, he associated himself with D. E. Dickerson, M. D., when they founded the Western Surgical Institute, under the incorporate laws of the State of Missouri. This enterprise has proved a financial as well as professional success, patients coming from New Mexico, Texas, Colorado, Indian Territory, Nebraska, and adjacent States, it being the only institution west of the Mississippi that is provided with steam-propelled movement cure, that being the most modern treatment for the cure of paralytics. Difficult surgical operations are performed daily.

Dr. Dickerson is a native of New York. He was born in Watertown, May 19, 1835, and received his literary education by attending the Jefferson County Academy, and graduated as M. D. from the New York Medical University at Albany, in 1857. He first practiced in his native town. In 1861 he was appointed, by Governor Morgan, surgeon of the Sing Sing Prison Hospital on the Hudson, holding that position only a short time, when the same Governor commissioned him surgeon of the 33d Regiment New York Volunteers. He served in that and other regiments until the close of the war in 1865, and coming to Kansas City in the fall of that year, he soon built up a lucrative practice. Here he has served as city physician on the staffs of Mayors Harris, Long, and McGee. 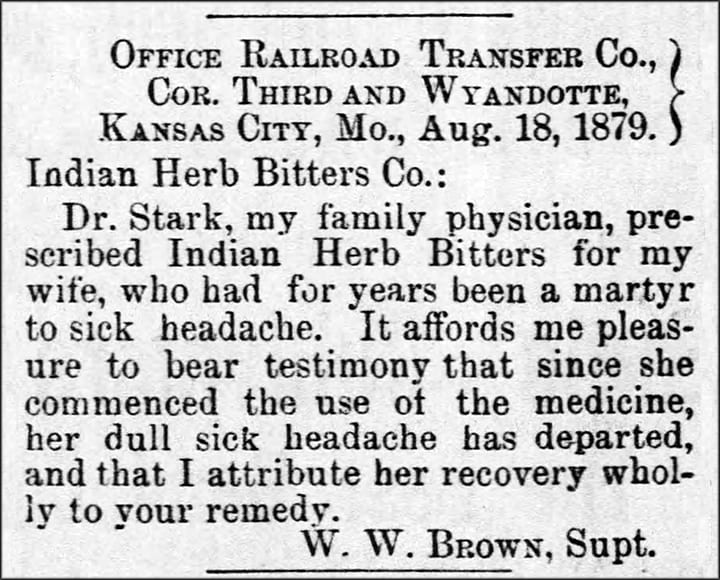 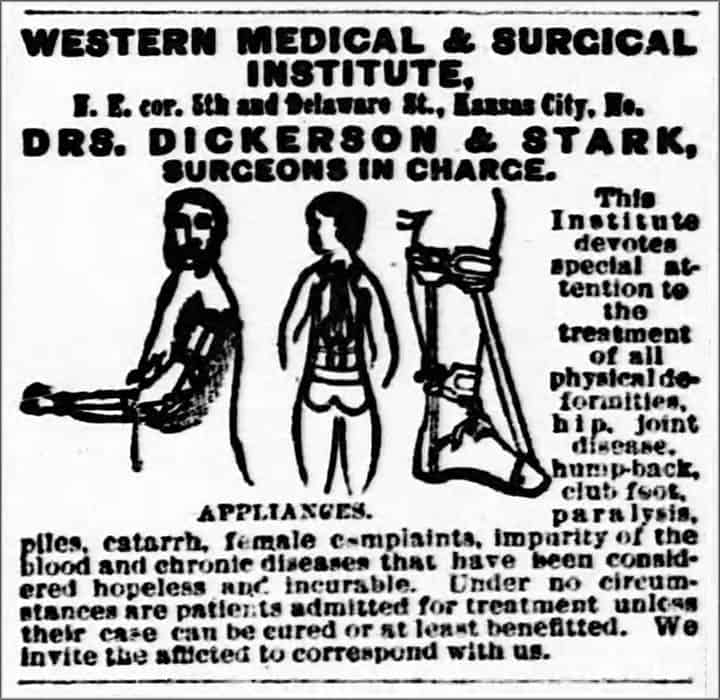 Ferdinand Meyer V is a native of Baltimore, Maryland and has a BFA in Fine Art and Graphic Design from the Kansas City Art Institute and School of Design. Ferdinand is the founding Principal of FMG Design, a nationally recognized design consultation firm. Ferdinand is a passionate collector of American historical glass specializing in bitters bottles, color runs and related classic figural bottles. He is married to Elizabeth Jane Meyer and lives in Houston, Texas with their daughter and three wonderful grandchildren. The Meyers are also very involved in Quarter Horses, antiques and early United States postage stamps. Ferdinand is the past 6-year President of the Federation of Historical Bottle Collectors and is one of the founding members of the FOHBC Virtual Museum.
View all posts by Ferdinand Meyer V →
This entry was posted in Advertising, Bitters, Figural Bottles, History, Medicines & Cures and tagged bitters, Dickerson, Figural, Herb, Indian, Institute, Kansas City, Missouri, Queen, Scotland, Stark, Surgical, Western. Bookmark the permalink.