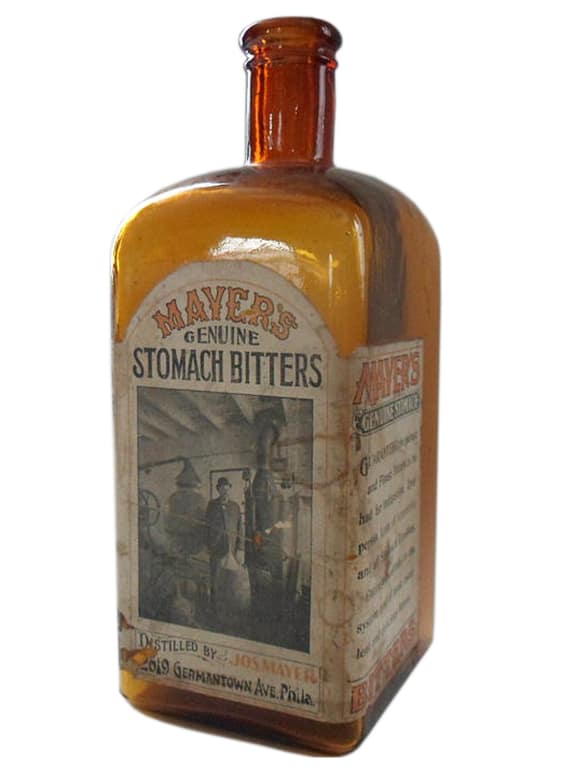 Here is an unlisted and labeled Mayer’s Genuine Stomach Bitters that Frank Wicker recently added to his collection. Thank you Frank for sending in the pictures. A late bitters with a pretty cool label. It does not seem to be listed in Bitters Bottles and will need to be picked up in Bitters Bottles Supplement 2. 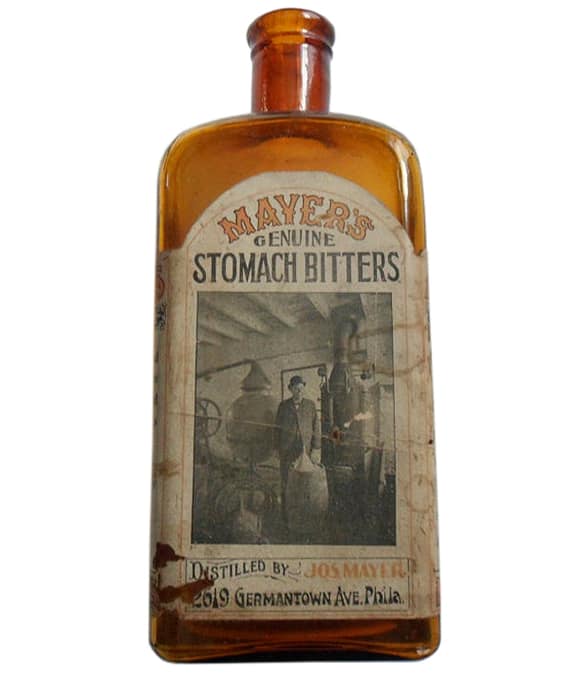 I was able to add this unlisted, label only bitters to the collection. It is not listed in the Ring & Ham Bitters Bottles or Bitters Bottles Supplement books. The label is a picture of a distillery. There is also a wicker covered demijohn in the picture. The label reads “Mayer’s Genuine Stomach Bitters.” This bottle is from the Joseph Mayer Distillery, 2619 Germantown Avenue in Philadelphia, Pennsylvania from 1890 to 1907 according to Prepro.com. 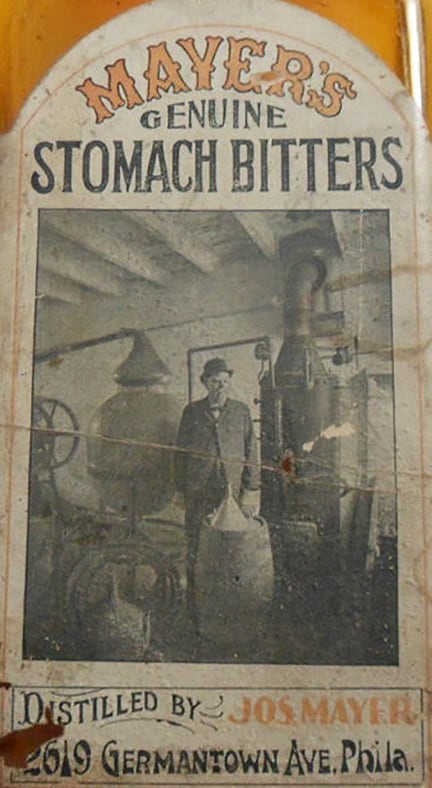 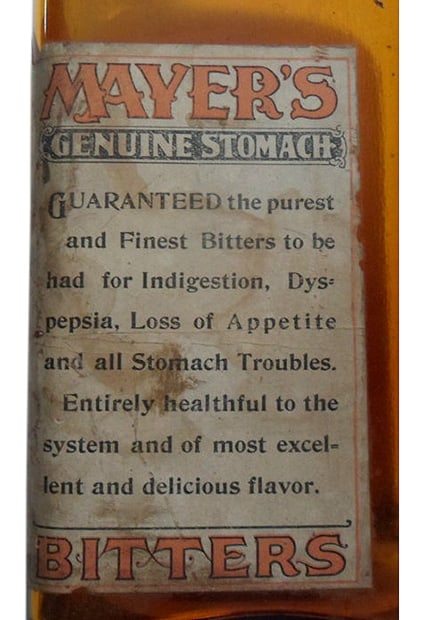 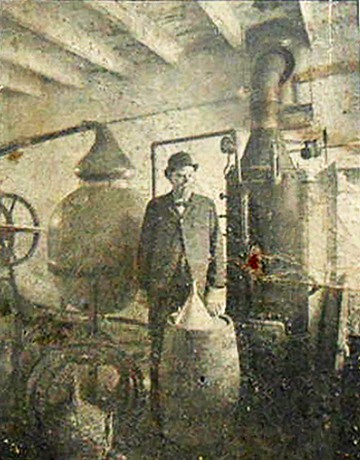 As you can see, “Distilled by Jos Mayer” is noted on the label with an address “2619 Germantown Avenue” in “Philadelphia, Pennsylvania”. An obvious German name not unlike my last name “Meyer”. Living on Germantown Avenue is another clue he is German.

From here, by looking at a 1900 US Federal Census, we can confirm his full name as Joseph S. Mayer from Germany who was born in 1835. He immigrated to America in 1867 and married a Stephana somebody in 1870. Both his father and mother were from Germany. It looks like he set up shop in Philadelphia and making his Mayer’s Stomach Bitters was the crowning achievement of his career as his death certificate in 1920 states that he was a manufacturer of stomach bitters and a bottler. You have to admit, there are not too many bitters labels that have a photograph of the proprietor that show him making his bitters. I bet it was some yummy stuff. 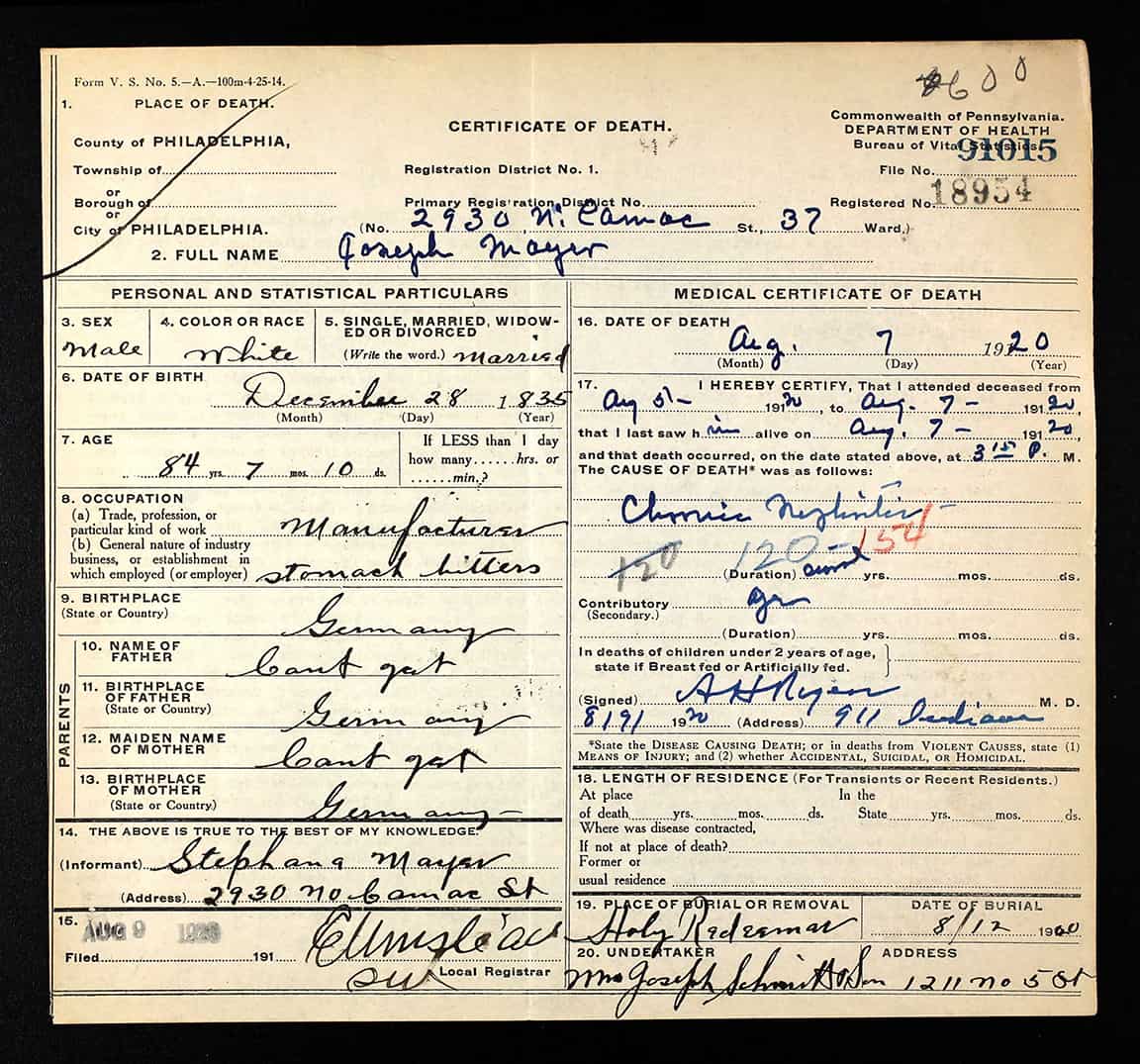 Ferdinand Meyer V is a native of Baltimore, Maryland and has a BFA in Fine Art and Graphic Design from the Kansas City Art Institute and School of Design. Ferdinand is the founding Principal of FMG Design, a nationally recognized design consultation firm. Ferdinand is a passionate collector of American historical glass specializing in bitters bottles, color runs and related classic figural bottles. He is married to Elizabeth Jane Meyer and lives in Houston, Texas with their daughter and three wonderful grandchildren. The Meyers are also very involved in Quarter Horses, antiques and early United States postage stamps. Ferdinand is the past 6-year President of the Federation of Historical Bottle Collectors and is one of the founding members of the FOHBC Virtual Museum.
View all posts by Ferdinand Meyer V →
This entry was posted in Bitters, History, Medicines & Cures and tagged bitters, Distiller, distilling, Frank Wicker, Joseph Mayer, Pennsylvania, Philadelphia, Stomach, unisted. Bookmark the permalink.