Here is a nice connection with whiskey and bitters bottles submitted by FOHBC Treasurer, Gary Beatty. I worked on the pictures a little bit to work with the post. The caption for the stained glass window above, “[Fig: 8] Stained glass OLD CASTLE WHISKEY sign from F. Chevalier & Co. (San Francisco, California 1885-1915)” – Ken Schwartz collection. 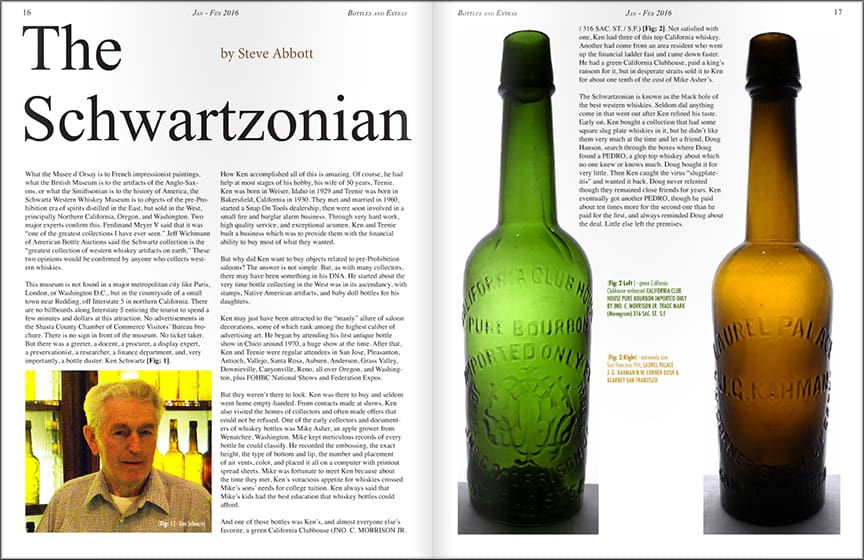 Ferd, here are a few photographs of the “CELEBRATED CROWN BITTERS.” In the January-February issue of BOTTLES and EXTRAS there was a great article on Ken Schwartz Whiskey collection. Below the stained glass sign for “Old Castle Whiskey” was the name of the company, F. Chevalier & CO. I have a rare bitters I purchased from a Port Angeles Washington dealer a couple of years ago. It is the “CELEBRATED CROWN BITTERS, F. CHEVALIER & CO. SOLE AGENTS. Bill Ham has it in his Bitters Bottles Supplement as C93 and listed as rare? I believe it is extremely rare. I have only seen one other? It is in a red amber, like the western Lash’s Bitters (see below). Sorry I could not get better pictures. You will have to look close to see Celebrated Crown Bitters and F. Chevalier Sole Agent embossings.

Become a FOHBC member and get BOTTLES and EXTRAS 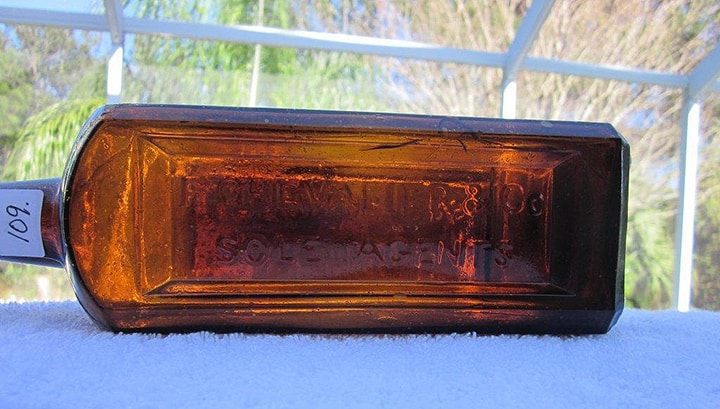 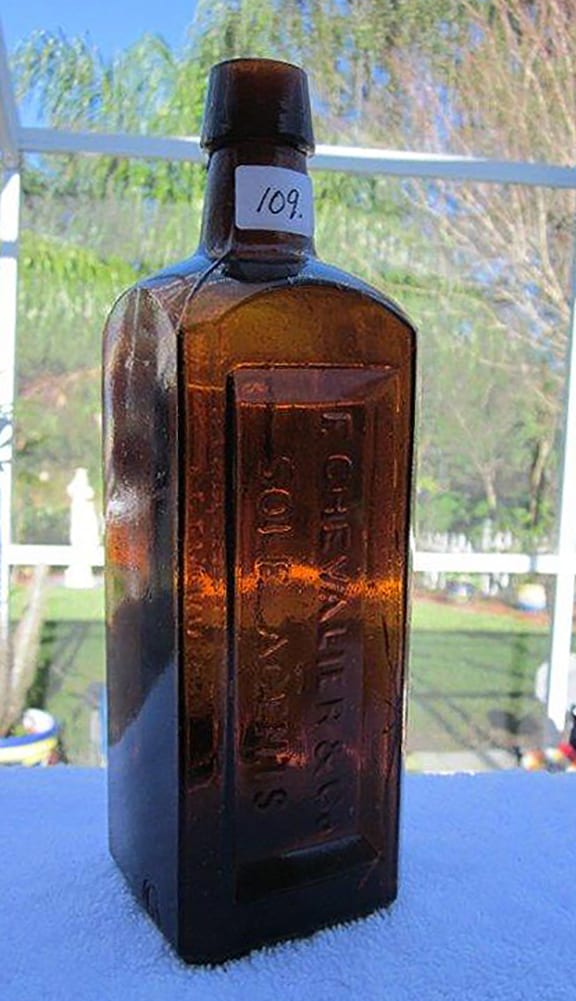 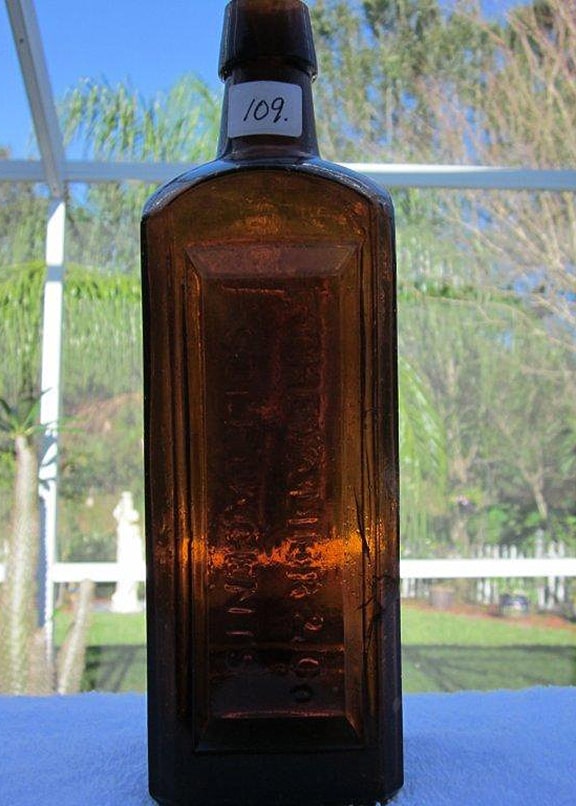 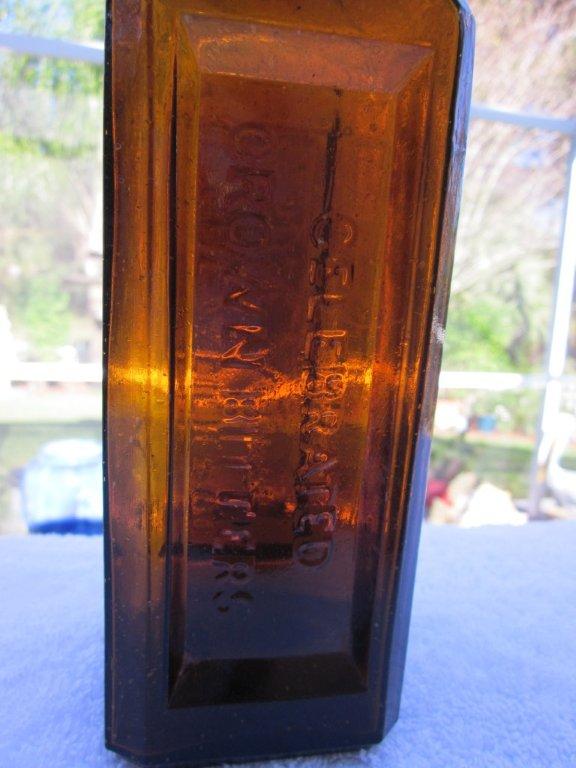 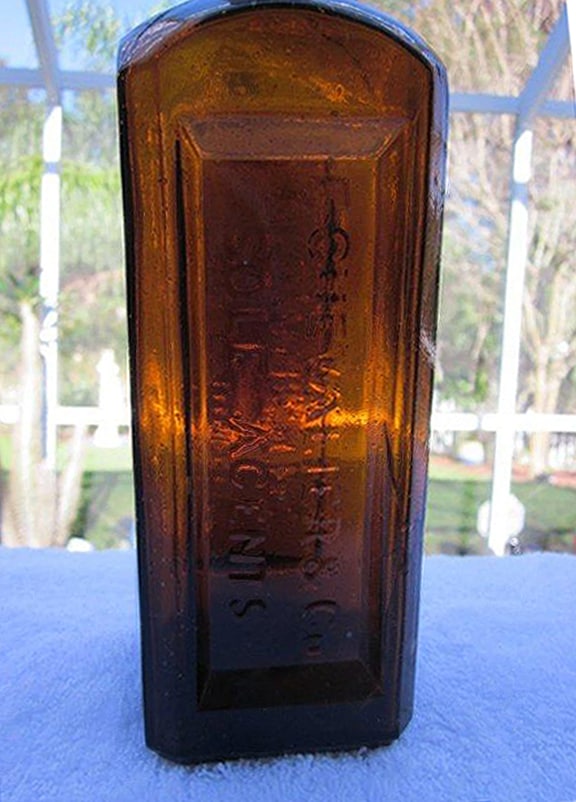 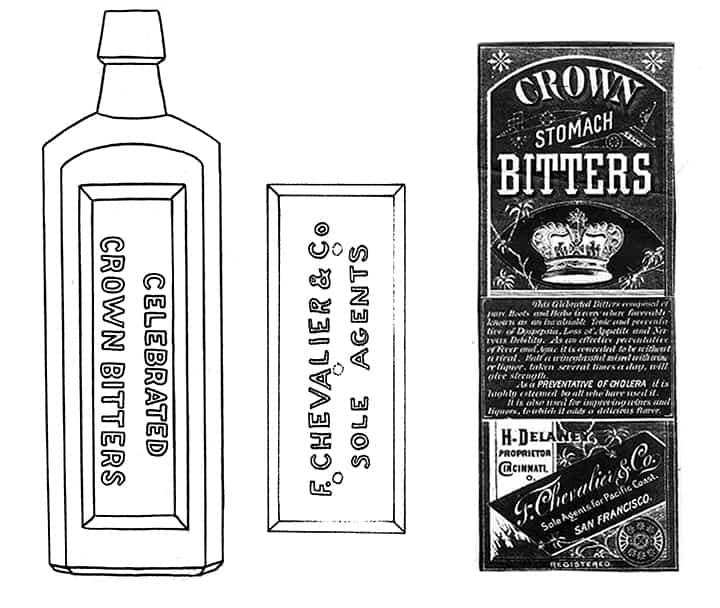 History of the New California – Its Resources and People, Volume II

The F. Chevalier Company, of San Francisco, which is now one of the most complete wholesale liquor houses in the west, is likewise one of the oldest firms of the kind on the Pacific coast, and it has a history of as long-coninued and successful existence as can be instanced by almost any commercial enterprise in California.

The firm of F. Chevalier and Co. was founded in Placerville, California, by the late Fortune Chevalier, in the year 1857. The business was shortly afterward moved to Sacramento and there carried on till 1870, when the increasing importance of the house and its expanding operations necessitated its removal to San Francisco. In 1872 their celebrated Castle whiskies were protected by a trade-mark deposited in the United States patent office at Washington, and since then re-registered and filed for record, and from that date the firm, by progressive methods and honorable dealings, has steadily widened its scope of usefulness and added to its resources.

The firm now occupies the centrally located and spacious quarters at Nos. 9, 11, 13 and 15 Beale street, San Francisco, and has traveling representatives covering the entire Pacific coast, besides resident agents at various centers throughout the eastern states. Much attention has also been devoted by this progressive house to the manufacture of a full line of cordials, liquors, cremes, syrups, essences, fruit juices and other delicacies in demand in the up-to-date saloon and cafe of the period, so that, although primarily whiskey merchants, the F. Chevalier Co. have also succeeded in making their establishment a complete liquor house, where every liquor liable to be required by the dealer may be found in stock, representatibe of the finest types and at rates equal to those of even any house making a specialty of such articles.

The company also owns the picturesquely situated Chateau Chevalier vineyards, near St. Helena in the foothills of Napa county, California, and which are planted out with the best varieties of vines, from which are produced the Chateau Chevalier wines, well known and appreciated locally as well as in the eastern states. 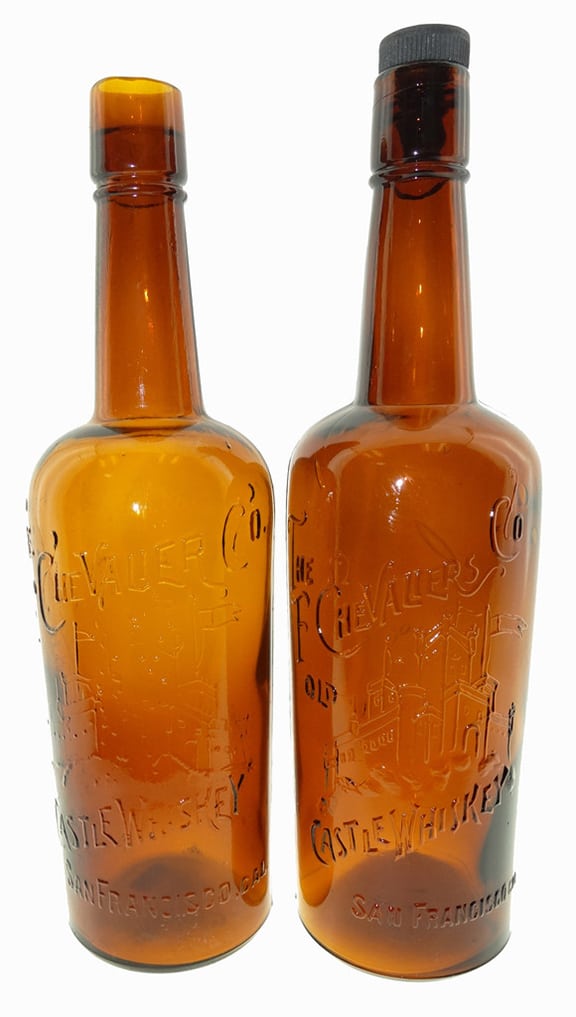 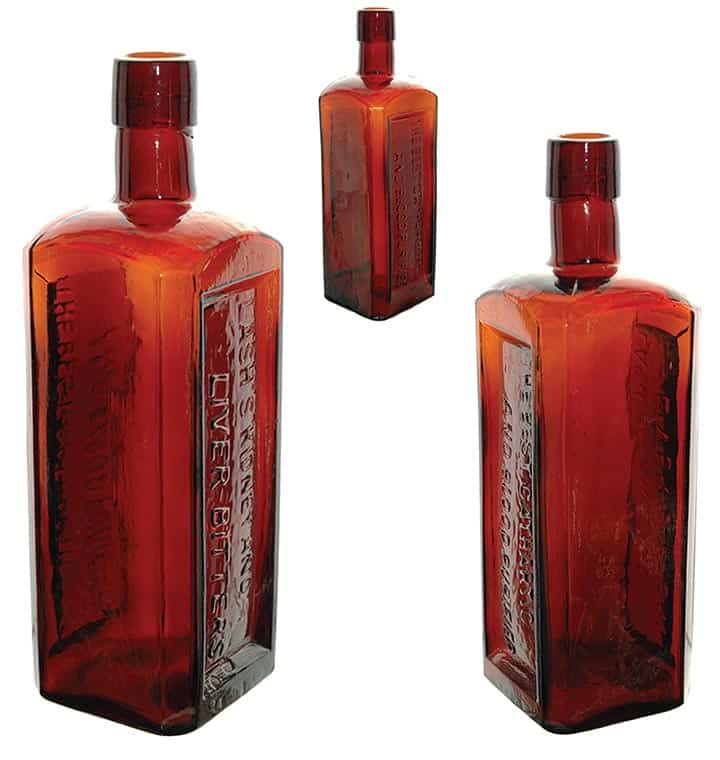 Ferdinand Meyer V is a native of Baltimore, Maryland and has a BFA in Fine Art and Graphic Design from the Kansas City Art Institute and School of Design. Ferdinand is the founding Principal of FMG Design, a nationally recognized design consultation firm. Ferdinand is a passionate collector of American historical glass specializing in bitters bottles, color runs and related classic figural bottles. He is married to Elizabeth Jane Meyer and lives in Houston, Texas with their daughter and three wonderful grandchildren. The Meyers are also very involved in Quarter Horses, antiques and early United States postage stamps. Ferdinand is the past 6-year President of the Federation of Historical Bottle Collectors and is one of the founding members of the FOHBC Virtual Museum.
View all posts by Ferdinand Meyer V →
This entry was posted in Article Publications, Bitters, Bottles and Extras, liquor, Questions, Stained Glass, Whiskey and tagged amber, bitters, Bottles and Extras, castle, Chevalier, Fortune, Gary Beatty, Glass, liquor, Meyer, Old, Placerville, rare, sacramento, San Francisco, Schwartz, stained, Western, Whiskey, window. Bookmark the permalink.