Here is an incoming email from super-sleuth, James Viguerie, as he finds yet another unlisted bitters reference, that being for the Wild Cherry and Iron Bitters prepared by J. M. Abeles, druggist, corner 3rd & Cherokee Streets in Leavenworth, Kansas. The label comes from a St. Louis Label Works press proof sheet. Pretty cool eh?

I came across a label for a bitters that was in a sample book for the St. Louis Label Works. A druggist named Jos. M. Abeles existed at the address shown on the label, so I think it was an actual product. Also, note on the full sheet that there are several Texas medicines. 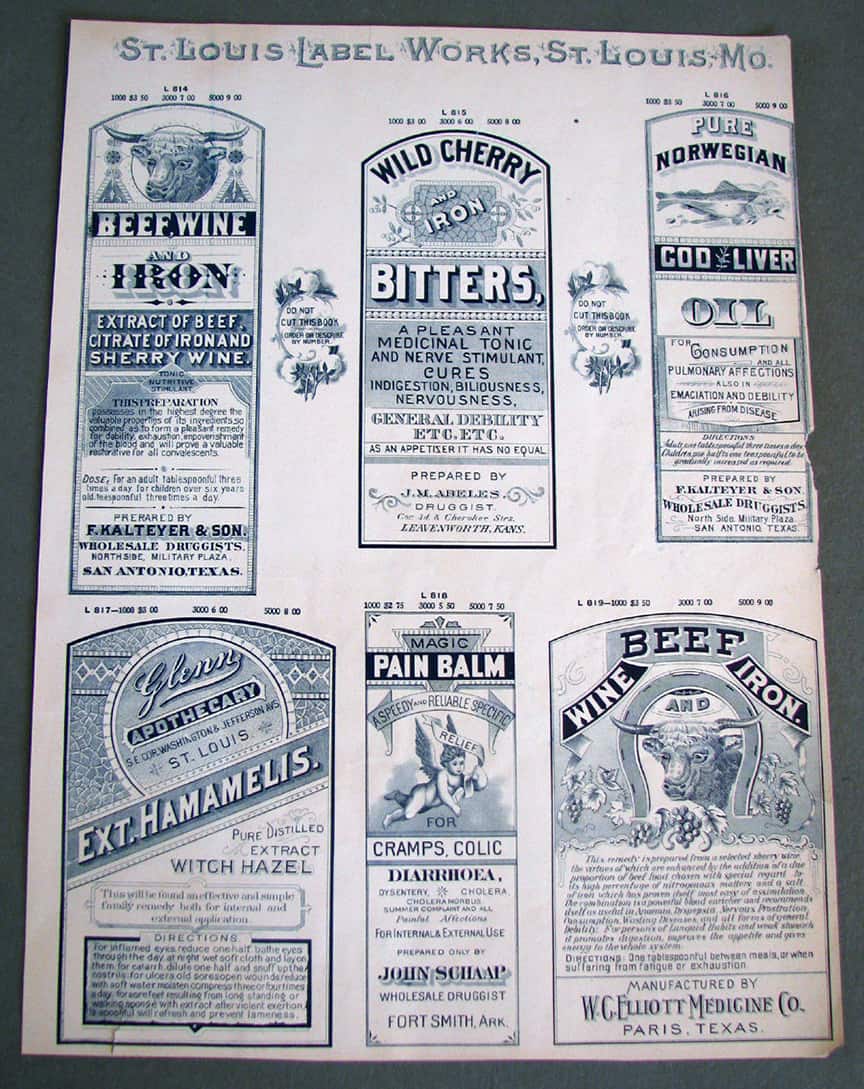 Joseph M. Abeles was a life-long druggist who ran an established drug store in Leavenworth, Kansas at the corner or 3rd and Cherokee Streets in what was called the Abeles Building. This substantial brick structure, the first in Leavenworth of its kind, was built in 1860 and was first occupied by Simon Abeles. Simon was Joseph’s father who was an exporter and trader in the west, making shipments as far as Santa Fe, New Mexico, trading with overland freighters and Indians. The building was remodeled in 1870 and was the first home of the German bank which was one of Leavenworths most prosperous banks. The bank president was Simon Abeles. Joseph M. Abeles would take it over for his drug store after the bank merged with another bank and relocated around 1890. He eventually would do a substantial renovation of the building and his drug store in 1916.

As far as advertising for the Wild Cherry and Iron Bitters, I can find none, nor can I find a bottle at this writing. One would have to think that this was a limited run, labeled bitters. 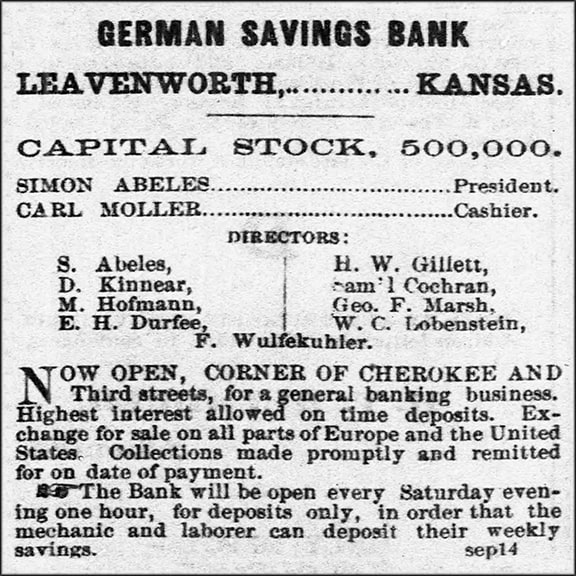 1872: More grandiose was the 1872 Simon Abeles House, which formerly stood on South Fourth Street and featured a three-story tower capped by a mansard roof. – National Register of Historic Places

1873: Broadsheet (see below) advertising a “Grand Gift Concert! Will be given at the City of Leavenworth, Kansas, On Wednesday, the 31st Day of December, 1873, For the Purpose of Erecting a Juvenile Reform School” 2p. 25″x9-1/2″, signed in type at bottom “SIMON ABELES, Leavenworth, Kansas” with testimonial from “Leading Citizens” who state “Mr. Simon Abeles, the proprietor of the ‘Gift Concert’ for the benefit of a ‘Juvenile Reform School,’ near the City of Leavenworth, is one of our most reliable and trustworthy citizens, and we cheerfully recommend him to the confidence of the public.” with the “FIRST GRAND PRIZE” being worth $100,000 and “Consisting of the superb palatial residence of SIMON ABELES, Esq., unsurpassed as a private dwelling in the United States, being only a few blocks from the Court House, surrounded by magnificent grounds, orchards, gardens, and vineyards.” Followed by a nice biography of Abeles’ business ventures in Leavenworth. Small loss at fold, else VG. – Raynors 2008 Auction

Broadsheet advertising a “Grand Gift Concert! Will be given at the City of Leavenworth, Kansas, On Wednesday, the 31st Day of December, 1873, For the Purpose of Erecting a Juvenile Reform School” – Raynors 2008 Auction

1890: Illinois College of Pharmacy. There was assembled, July 24, at the Grand Opera House, a large audience to witness the graduating exercises of the summer course of this college. An interesting selection of music punctuated the changes in the program. The address of the occasion was delivered by Rev. Dr. F. M. Bristol, of Trinity Methodist Church. The list of graduates is as follows – Joseph M. Abeles, Leavenworth, Kan. ; Gustave H. Adamick, La Salle, Ill. ; Nicholas B. Bartz, Lemont, Ill.; Nelson M. Black, Valley City, N. D… – Pharmaceutical Record, Volume 10 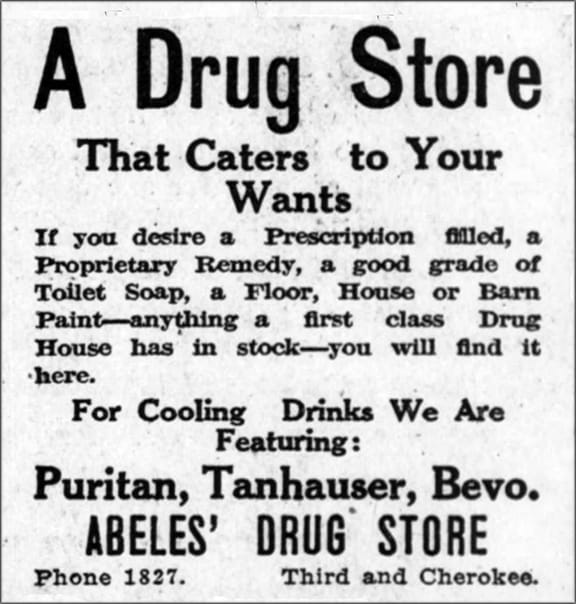 2009: The Farewell to Abeles Field event will include a reading of a short history of the athletic stadium and recognition of winning teams and various leaders of the past. A video featuring photographs of the field from 1926 to 2009 will be screened. – The Leavenworth Times

Ferdinand Meyer V is a native of Baltimore, Maryland and has a BFA in Fine Art and Graphic Design from the Kansas City Art Institute and School of Design. Ferdinand is the founding Principal of FMG Design, a nationally recognized design consultation firm. Ferdinand is a passionate collector of American historical glass specializing in bitters bottles, color runs and related classic figural bottles. He is married to Elizabeth Jane Meyer and lives in Houston, Texas with their daughter and three wonderful grandchildren. The Meyers are also very involved in Quarter Horses, antiques and early United States postage stamps. Ferdinand is the past 6-year President of the Federation of Historical Bottle Collectors and is one of the founding members of the FOHBC Virtual Museum.
View all posts by Ferdinand Meyer V →
This entry was posted in Advertising, Bitters, Druggist & Drugstore, History, Medicines & Cures, Tonics and tagged bitters, Druggist & Drugstore, iron, James Viguerie, Joseph Abeles, Kansas, label, Leavenworth, Medicine, printer, sheet, Simon Abeles, St. Louis, Tonic, unlisted, Wild Cherry. Bookmark the permalink.