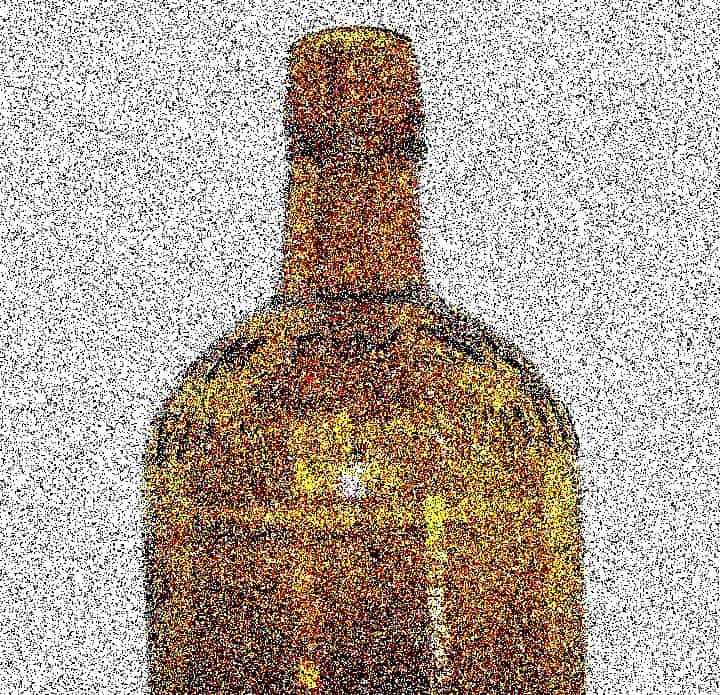 A tale of two unlisted bitters

James also provided a tantalizing link with a clue for the Tolson & Young Tonic Bitters below.

[From an online Rootsweb posting]

Both of these bottles [NOT SHOWN HERE]–nine inches high—contained medicines formulated by the M. P. Young & Co. The embossing, on their shoulders, have “M. P. Y. & Co.,” above and “Vermilionville La” below.

The M. P. Young & Co., a drugstore, manufactured, bottled, and advertised two medicines in the early 1870s. One was a bitters, a concoction once popular throughout the USA. This medication seems to have sold well because of its high alcoholic content. One of the most popular brands of bitters, was Hostetter’s Stomach Bitters. Bottles embossed with this name have been discovered on Civil War battlefields. In my collection I have several of these bitters bottles that I’ve unearthed in the Acadiana area. I found one of these bottles with a partial label, in an attic. Dosing instructions stated that adults were to take a wineglassful three times a day, before meals. Imagine that quantity being prescribed today! This Vermilionville drugstore also bottled “Vegetable Tonic Bitters.”

At least one Abbeville drugstore manufactured its own bitters. Tolson & Young, owned by Dr. F. R. Tolson and N. C. Young, manufactured their Tolson & Young Tonic Bitters, according to one of their invoices dated initially in 1881. This drugstore was on the corner of Washington and Pere Megret Streets, on church property where now stands a large oak tree, across from Piazza Office Supply.

The M. P. Young Co. was owned by Monroe Porter Young and William Clegg. Their drugstore was on the corner of Vermilion and Washington Streets in Vermilionville from 1870 until 1883 when the partnership was dissolved. Before ending their partnership, Young and Clegg had opened drugstores in Opelousas and in Rayne. This business seems to have been one of Acadiana’s first chain stores. Clegg was mayor of Vermilionville from 1879 to 1881. Young was mayor from 1881 until 1884. The name of the town was changed to Lafayette, in 1884. M. P. Young died in 1887.

The other preparation that this company manufactured, bottled, and advertised was their “Elixir of Calisaya Bark with Pyrophosphate of Iron.” Try to say that name quickly! It is highly probable that these bottles contained these medicines. The lighter colored bottle seems to have been an error in production. The other M. P. Y. & Co. bottles, four in all, that I’ve seen, were all dark.

The story continues when we consider the provenance of these two bottles in more recent times. The darker, amber bottle is mine. The other bottle belongs to Courtney Frioux. Mine was found underneath a house in Lafayette in the early 1970s. I bought it for $80. Today its worth is estimated to be between $350 and $400. The other bottle has a more interesting story. It involved its near destruction by a man who had no interest in this piece of history, and its rescue by a man and a woman who appreciated its historical value.

According to Joe Bolen, he and his wife Marge had gone to a lot across from the Lafayette Public Library. They had noticed that there was a floor remaining of a house that had long been dismantled. Being bottle collectors, the Bolens thought that there was a good chance of finding a few antique bottles. Unfortunately, the Bolens went on the day that this floor was being taken apart. Joe noticed that the foreman looked to be an insensitive person. Joe’s assessment turned out to be correct. This man warned the Bolens to stay off the lot. As the sidewalk was next to the remains of the house, Joe noticed a bottle that was next to the sidewalk and behind one of the brick piers that supported the floor. Moving quickly, he reached down and plucked out the bottle and stuffed it inside his coat. Joe tried to explain that any bottles on the lot were probably of historical significance. At this point, the foreman disdainfully and defiantly barked out orders to destroy all bottles on the property. A worker with a crowbar began the senseless destruction of all bottles in sight. Then, the foreman demanded to know what Joe had put inside his coat. By this time the Bolens, sickened by what they had witnessed, began walking away. The foreman began threatening to sue the Bolens for trespassing, for theft, etc.

The Bolens and the honey amber M. P. Y. & Co. bottle escaped unharmed. A few years ago, before the Bolens moved to Arkansas, Marge sold that unusually-colored M. P. Y. & Co. bottle to Courtney Frioux for $500. Also before they moved, Marge gave me a small medicine bottle with much of the label still on it. It is the only bottle that I know of that has Vermilionville on its label.

After some searching, I did find reference to an unlisted Tolson’s Tonic Bitters. It originated in 1880 or so and was made by Frederick R. Tolson in Abbeville, Louisiana which is a small city in and the parish seat of Vermilion Parish, 150 miles west of New Orleans and 60 miles southwest of Baton Rouge. It is now southwest Lafayette, Louisiana. The Tolson’s Tonic Bitters remained on shelves for about a year or two when Tolson was a partner with Tolson and Young (N. C. Young). Maybe it was also called Tolson & Youngs Tonic Bitters too. I really need to see that billhead noted above. It was sold as a cure for Malaria and Yellow Fever and cost 75 cents a bottle. They dissolved their partnership in early 1884 and went separate ways. N. C. Young would remain in Abbeville as a druggist and in 1885 was selling Creole Female Tonic. Bet it was the same soup.

Interesting enough, there is a cylindrical bottle embossed, “M. P. Y. & Co. / Vermilionville, La.”. I wonder if this bottle was the carrier of a potential labeled bitters for Tolson or was it for the Vegetable Tonic Bitters?…or something else? 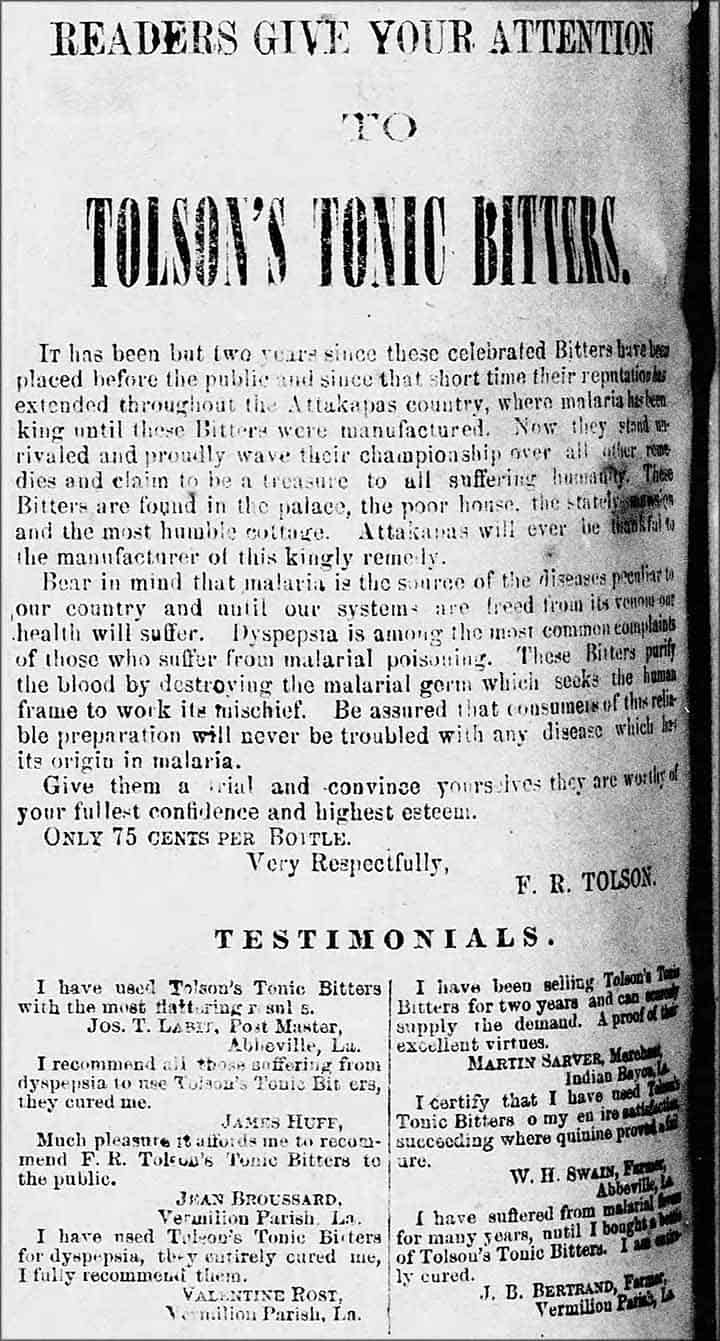 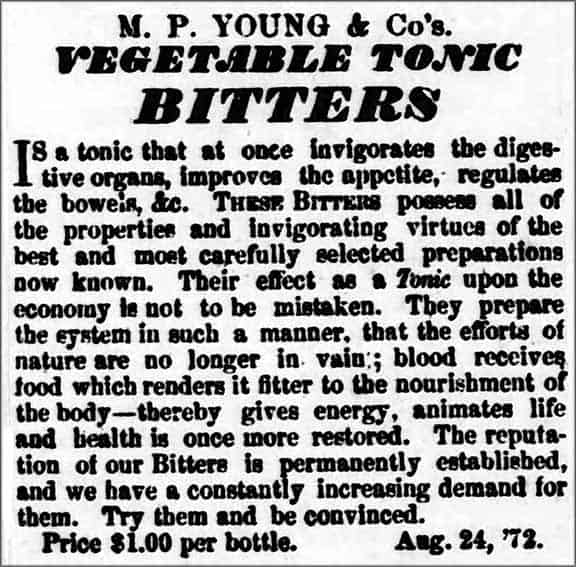 I tracked down Courtney Frioux and he replied, “Hey Ferd, Yes, I have a bottle, embossed on the shoulder, “M. P. Y. & Co. / Vermilionville, La.”  Today the town is know as Lafayette, La. Changed its name after 1884. The initials stand for Monroe Porter Young who was a druggist in Vermilionville at that time. I have always assumed that this bottle was a bitters. How did you find out about this bottle, and that I owned one?  Did Young produce a Tolson’s Tonic Bitters?” 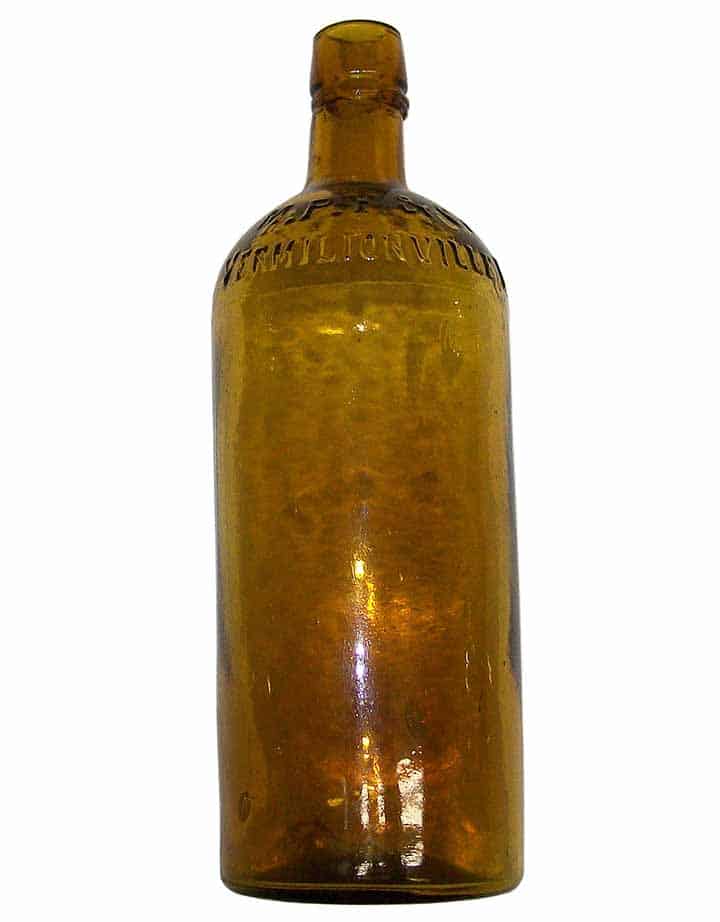 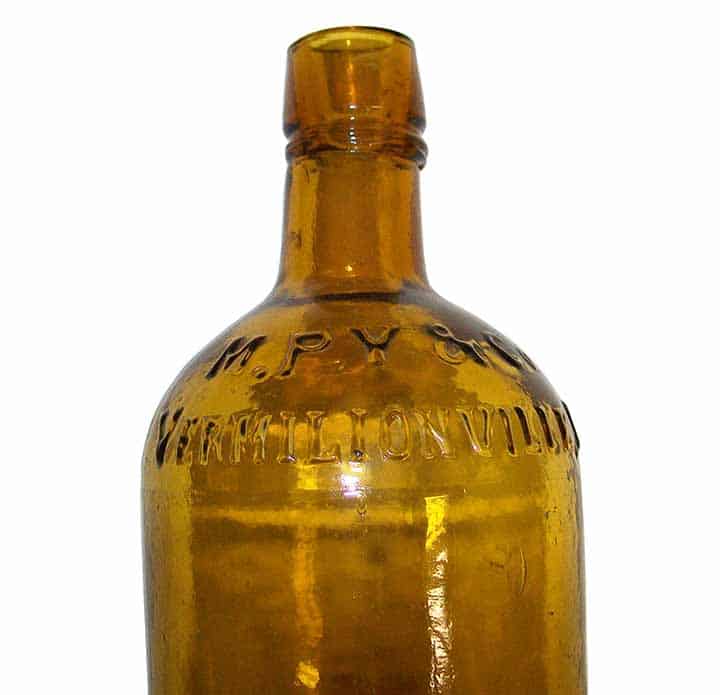 FRANCIS D. YOUNG, M.D., RAYNE.– Dr. Francis D. Young was born in Vermilion parish, Louisiana, March 1, 1835. He is the son of Notley and Frazelie (De Villiere) Young. His father was a native of Washington, D.C. He was engaged in farming in Maryland until 1811, when he removed to Louisiana, and located in St. Landry, then Vermilion parish, where he became an extensive sugar planter. In 1851 he removed to Springfield, Kentucky, where he died about the close of the war. The mother of our subject was a native of Louisiana of French extraction, her ancestors having been of the French nobility, who fled from their native country. She died when Francis D. was a child.

The subject of this sketch is the fifth of a family of seven children. He received his literary education at St. Joseph College, Perry County, Ohio. Soon after leaving college he commenced the study of medicine with Dr. Montgomery, of Springfield, Kentucky. In 1854-55 he was a student at the College of Physicians and Surgeons, New York. In 1855-56 he attended the medical department of the University of Louisiana, from which he graduated in the latter year. He practised [sic] his profession in Lafayette for one year,
when he removed to Abbeville, Vermilion parish, and practised until 1887, at which time he came to this place. Dr. Young is a representative man of his profession, and his ability as a physician is attested in the large practice which he has at this place. The Doctor was married in 1858 to Miss Jemima Campbell native of Vermilion parish, Louisiana. Mrs. Young died December 25, 1860, having become the mother of a son–Notley C.–who is engaged in the drug business at Abbeville. October, 1862, Dr. Young married Miss Mary M. Guegon, of Vermilion parish. To this union have been born ten children, six sons and
four daughters. Mrs. Young died in 1886. The Doctor and family are Catholics. Dr. Young has an exceptional family, three sons physicians, and a son-in-law, Drs. F. F. Young, B. I. Young, W. G. Young and C. I. Edwards, all of whom have made bright marks in their profession. – Southwest Louisiana Biographical and Historical, Biographical Section, p. 275. Edited by William Henry Perrin. Published in 1891, by The Gulf Publishing Company.

N. C. Young, druggist, was born in Vermilion parish, Louisiana, January, 1860. He is the son of Dr. F. D. Young, whose sketch appears in the Acadia biographies. Mr. Young received his education in the schools of Vermilion parish, and at the age of seventeen years entered a drug store in Abbeville as clerk. In 1880, in partnership with F. R. Tolson, he opened a drug store in Abbeville and the business was conducted jointly until 1883, when Mr. Young purchased the interest of his partner and has since that time conducted an independent business. Mr. Young is a thorough business man and is public spirited. He was for two years treasurer of Vermilion parish, and is now president of the parish school board. He was married, in 1881, to Miss Pipillia Abadie, of Abbeville. They are the parents of four children, three sons and a daughter. Mr. Young and wife are members of the Catholic church. – Southwest Louisiana and Biographical and Historical by William Henry Perrin published in 1891; page 308

Note: Dr. F. D. Young and Marie Mathilde, née Guégnon. According to one source, Frank had nine siblings and a half brother, N.C. Young, a pharmacist. Read: Dr. F. F. Young and the Fenwick Sanitarium/Palms Hospital

The M. P. Young Company was owned by Monroe Porter Young and William Clegg and was formed in 1870 after one partner, F.C. Latiolais dropped off. They put out the Vegetable Tonic Bitters in 1872 and 1873. Their drugstore was on the corner of Vermilion and Washington Streets in Vermilionville, Louisiana until 1883 when the partnership was dissolved. 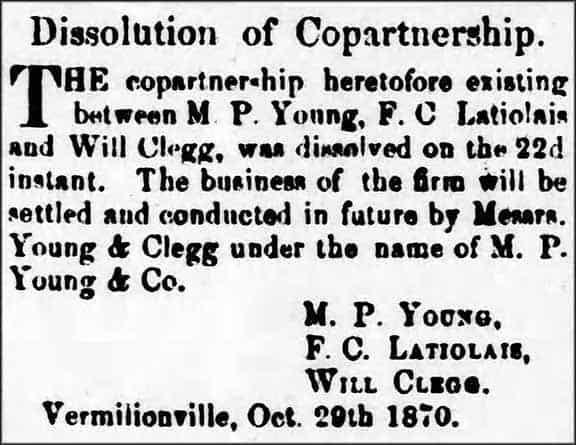 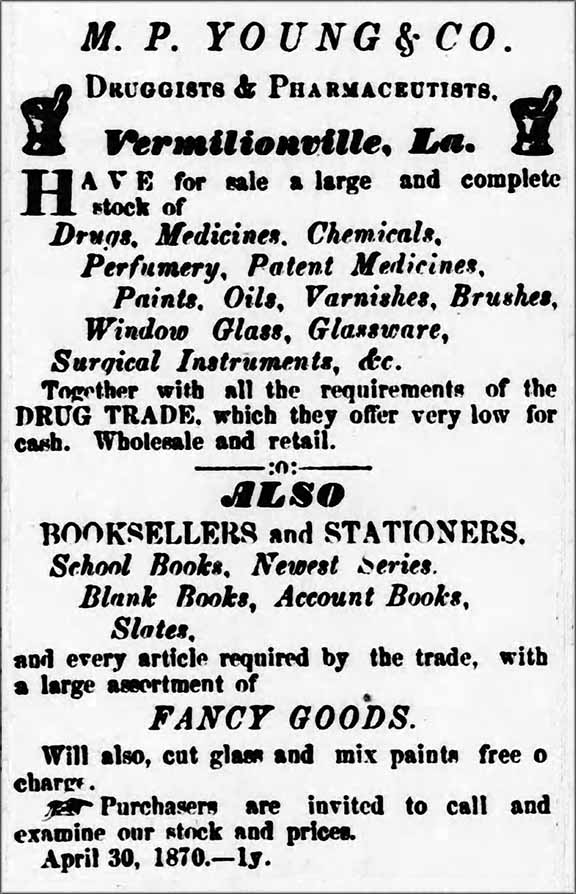 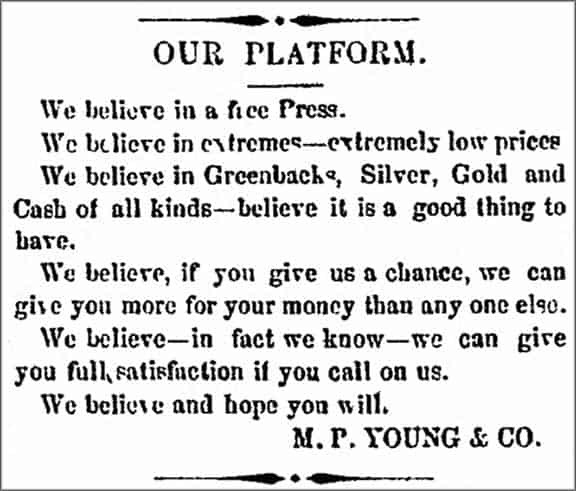 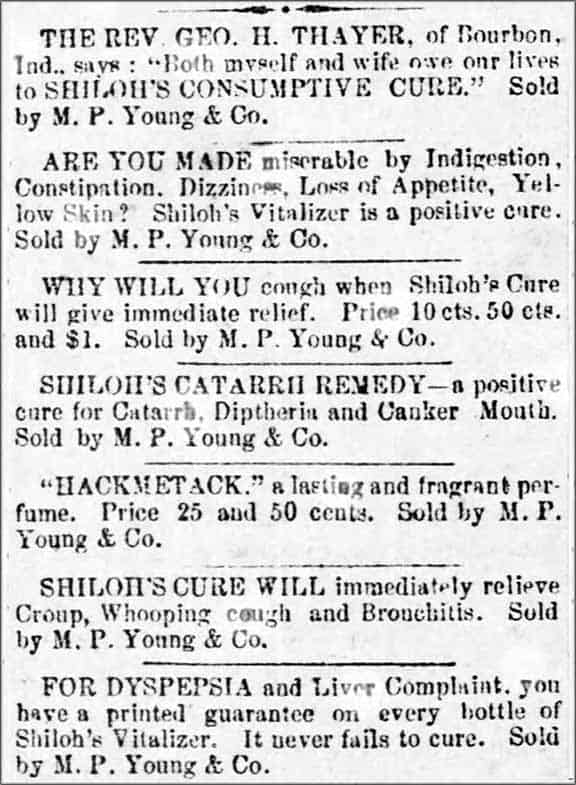 Frederick R. Tolson was born in Mississippi around 1852. He married Martha Norris Young on 19 December 1877 in Abbeville, Louisiana. Young must have been the sister or of N. C. Young, an eventual business partner of Tolson. In 1880 he marketed and sold his Tolson’s Tonic Bitters for about 2 or 3 years 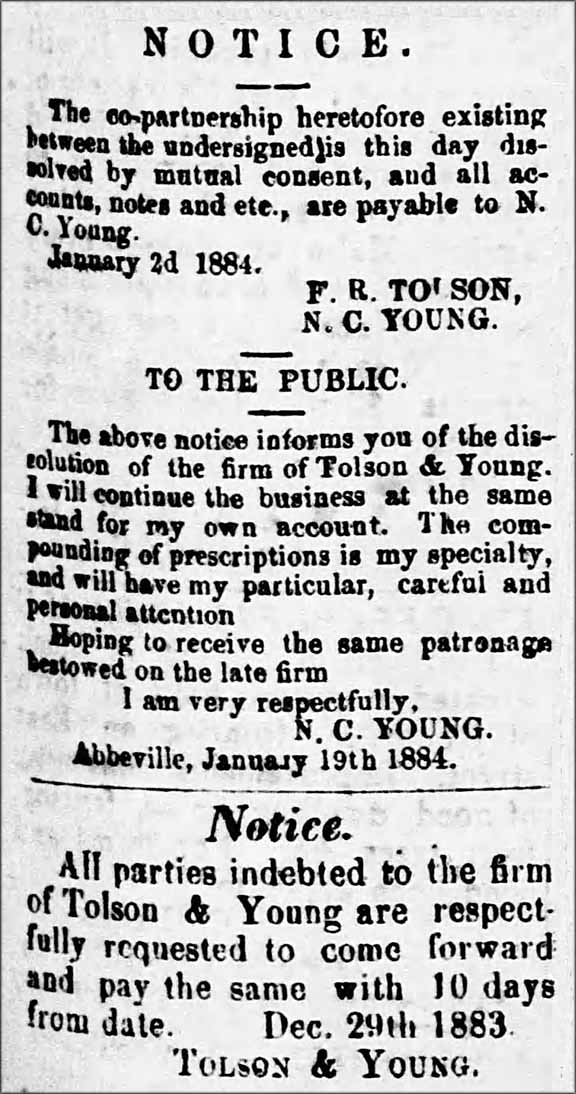 Notice: Co-partnership between F.R. Tolson and N.C. Young dissolved. – The Meridional, Saturday, May 3, 1884 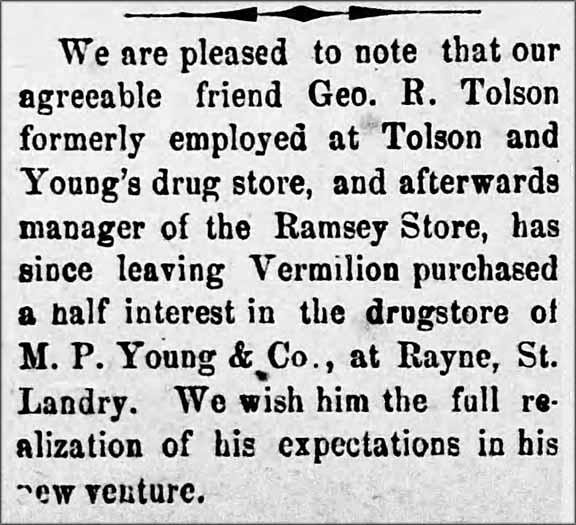 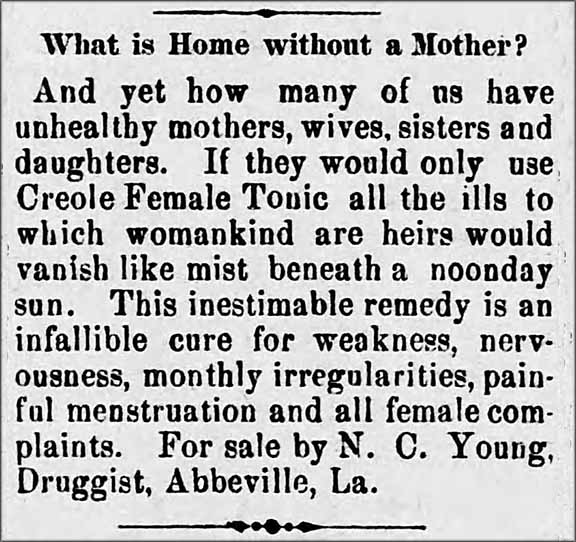 Ferdinand Meyer V is a native of Baltimore, Maryland and has a BFA in Fine Art and Graphic Design from the Kansas City Art Institute and School of Design. Ferdinand is the founding Principal of FMG Design, a nationally recognized design consultation firm. Ferdinand is a passionate collector of American historical glass specializing in bitters bottles, color runs and related classic figural bottles. He is married to Elizabeth Jane Meyer and lives in Houston, Texas with their daughter and three wonderful grandchildren. The Meyers are also very involved in Quarter Horses, antiques and early United States postage stamps. Ferdinand is the past 6-year President of the Federation of Historical Bottle Collectors and is one of the founding members of the FOHBC Virtual Museum.
View all posts by Ferdinand Meyer V →
This entry was posted in Advertising, Bitters, Druggist & Drugstore, History, Medicines & Cures, Questions, Tonics and tagged Abbeville, bitters, Courtney Frioux, Creole, Frederick, James Viguerie, Lafayette, Louisiana, M. P. Young & Co., Monroe Porter Young, N. C. Young, Tolson, Tonic, Vegetable, Vermilion, William Clegg, young. Bookmark the permalink.