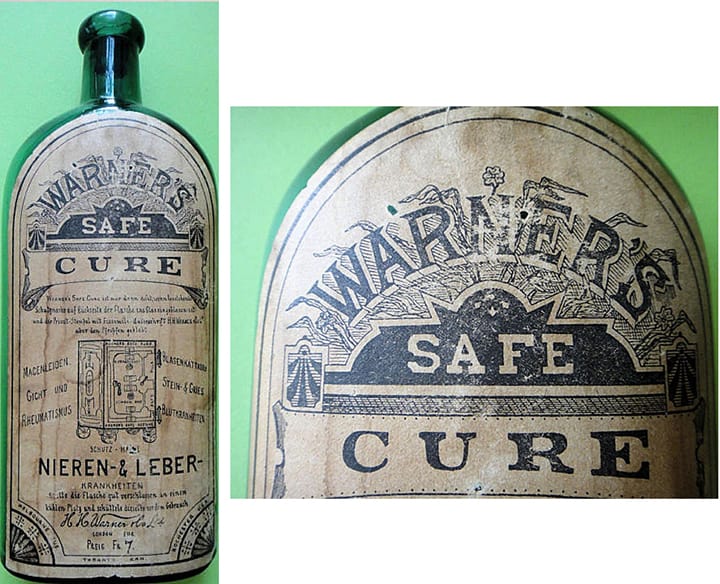 A series of e-mails from noted collector and researcher Michael Seeliger from Brooklyn, Wisconsin. The person he references is not a member of the FOHBC. After review, I am red flagging.

[E-mail #1] I have been e-mailing a person (Richard Curry in Cincinnati, Ohio) who has answered an advertisement I had in either of the (bottle) magazines. He answered in a generic e-mail asking if I was still looking for unusual items. When I said I was interested in Warner’s with labels etc. he came back with an e-mail that he had one that was unique because of the pristine label. He sent pictures of a green Frankfurt SC. Nice bottle but no label. Then when I asked, he produced a beautiful labeled picture. He wanted $900 for it. I thought about it and said it was too rich for my blood I was thinking more in the $550 range but it was nice and thanks, “can I use the picture for my new book?” He said no, only if I bought the bottle which he was now willing to sell for $550, because he needed cash. To make a long story short, he wanted a MoneyGram and would not tell me where he was located. I said Bill Mitchell and I are were going to Lexington and then to Richmond, Virginia on our way to Florida next week and we could stop by and pick it up.

Now I have seen more than one Warner’s in my life and I thought I had seen the label before on the Warner’s Safe Cure Blog site. I went on and low and behold, surprise, surprise, all 4 of the pictures he sent me were on the blog site. The bottle was sold to Dan Cowman on eBay for $2,275 three years ago (the stain on label was the dead give away). Unless Dan sold this extremely nice bottle cheap or it has been stolen, this is obviously a scam being done on collectors from ads in the AB&GC or the Federation magazine. I don’t advertise elsewhere. I did not go through with the scam and plan on asking him to send the bottle first which I know he will not or cannot do. If he does then it may be stolen. I need to check with Dan’s wife about the possible sale of that bottle by Dan earlier. How can we get the word out? I will provide details if necessary.

[E-mail #2 from MS] This is how the emails went after the offer. Kind of suspicious.

Address is confirmed for shipping. The $550 shipped to Brooklyn Wisconsin is deal..Below is the information you need.

Once payment is completed, you can email the below information to enable me receive and confirm payment.

I’ll email a UPS tracking number once payment is received and confirmed.

[E-mail #3 from MS] Here are the pictures he forwarded of the bottle he had for sale. (See top of post)

[Steve Jackson – Warner’s Safe Cure Blog] Mike and I spoke about this over the weekend. The seller clearly lifted photos of this bottle from my Warner’s Safe Cure Blog and sent them to Mike. I believe I got the photos from the original seller in Hungary and the bottle was purchased by Dan Cowman. If a deal looks too good to be true, it probably is. Caveat emptor for sure.

Ferdinand Meyer V is a native of Baltimore, Maryland and has a BFA in Fine Art and Graphic Design from the Kansas City Art Institute and School of Design. Ferdinand is the founding Principal of FMG Design, a nationally recognized design consultation firm. Ferdinand is a passionate collector of American historical glass specializing in bitters bottles, color runs and related classic figural bottles. He is married to Elizabeth Jane Meyer and lives in Houston, Texas with their daughter and three wonderful grandchildren. The Meyers are also very involved in Quarter Horses, antiques and early United States postage stamps. Ferdinand is the past 6-year President of the Federation of Historical Bottle Collectors and is one of the founding members of the FOHBC Virtual Museum.
View all posts by Ferdinand Meyer V →
This entry was posted in Advice, Collectors & Collections, Medicines & Cures, News, Scams & Frauds and tagged Cure, Curry, Frankfurt, Jackson, label, michael, safe, Scam, Seeliger, Warner. Bookmark the permalink.