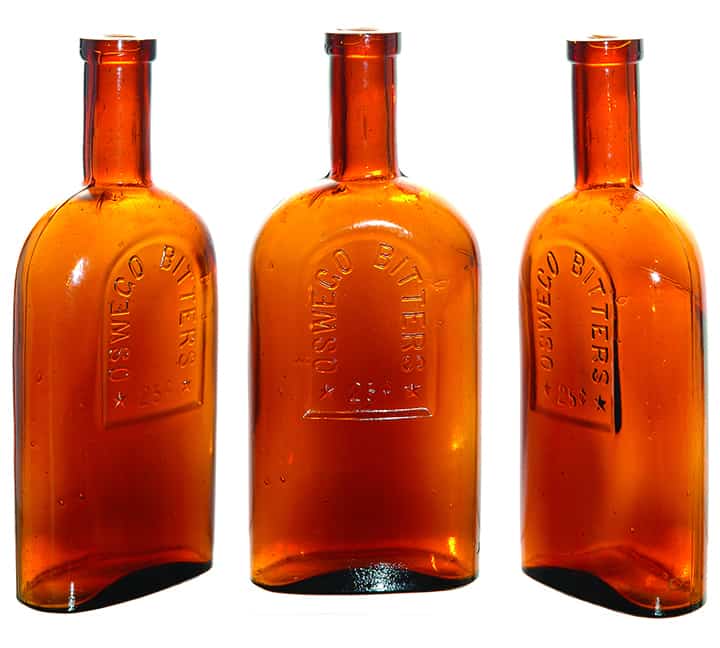 The top Oswego Bitters image is from my collection. Three views. If you look carefully you can see 25 cents (cent symbol) embossed on the front. The amber, oval, flask is 7″ tall. It has a tooled lip. The Carlyn Ring and W.C. Ham listing in Bitters Bottles is as follows: 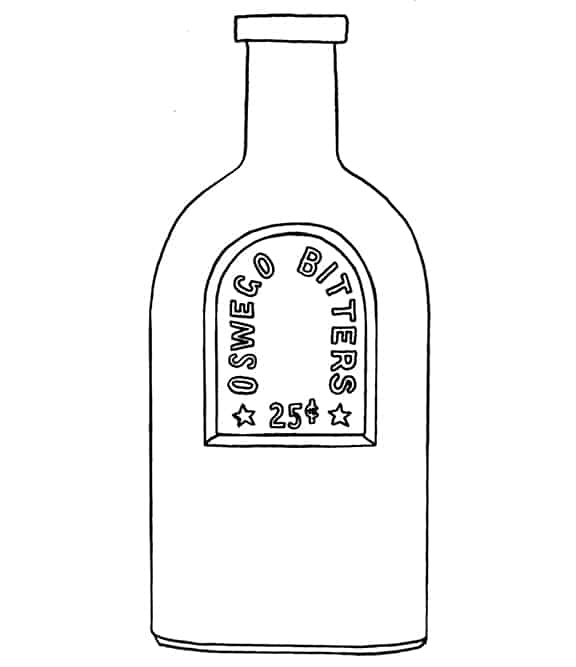 Recently Bill Ham was contacted by John Golley with a new, unrecorded example of a larger Oswego Bitters coming in at 9 3/4″ tall with the “OSWEGO BITTERS” backwards! It also has an applied mouth. Obviously an earlier example. The new listing by Bill Ham within the forthcoming Bitters Bottles Supplement 2: 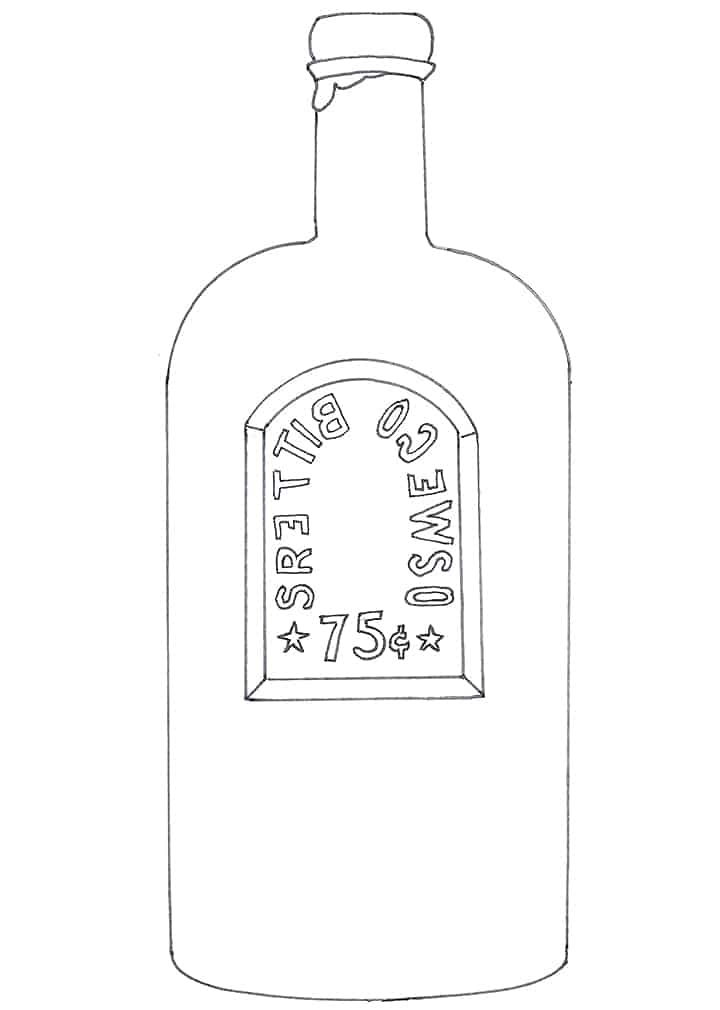 Here are two images below that I cleaned up in Photoshop (took out the background) that John sent to Bill. 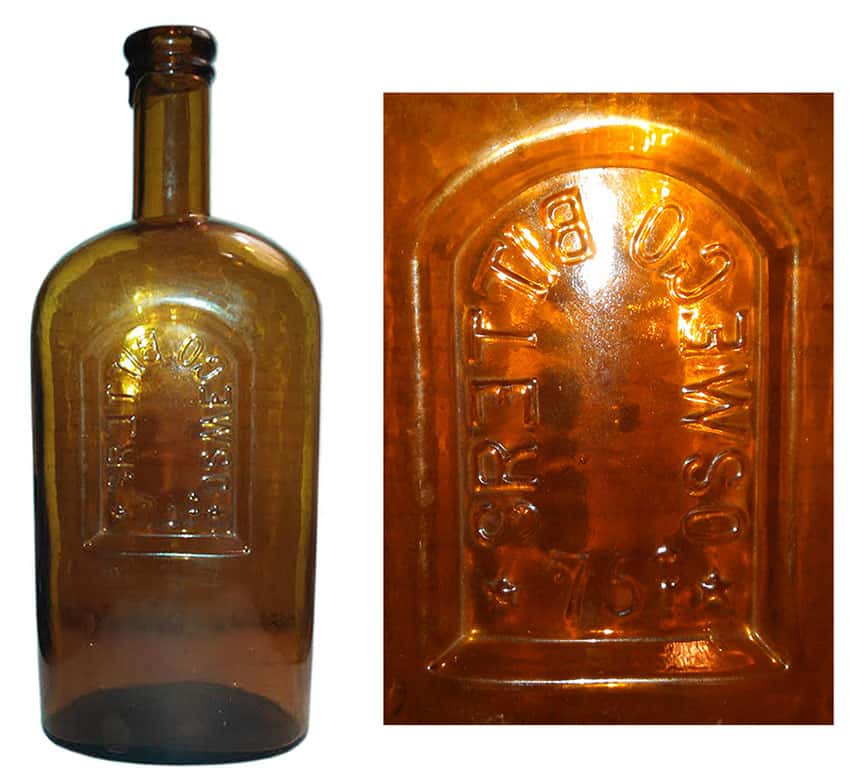 I have been carrying around this wonderful picture from Glass Works Auctions of a labeled Oswego Bitters from Oswego, New York. 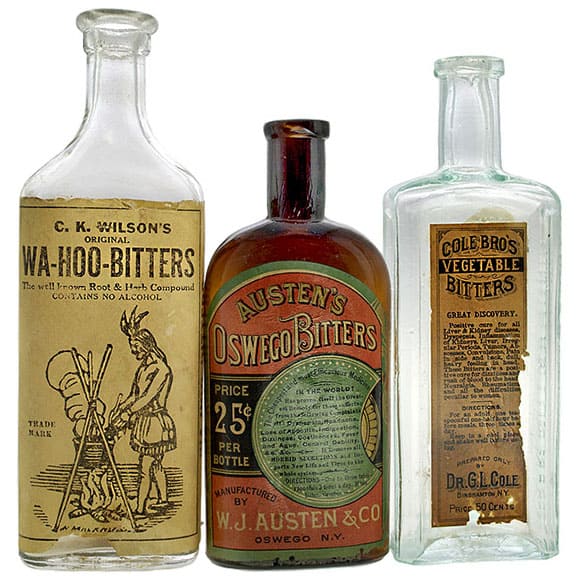 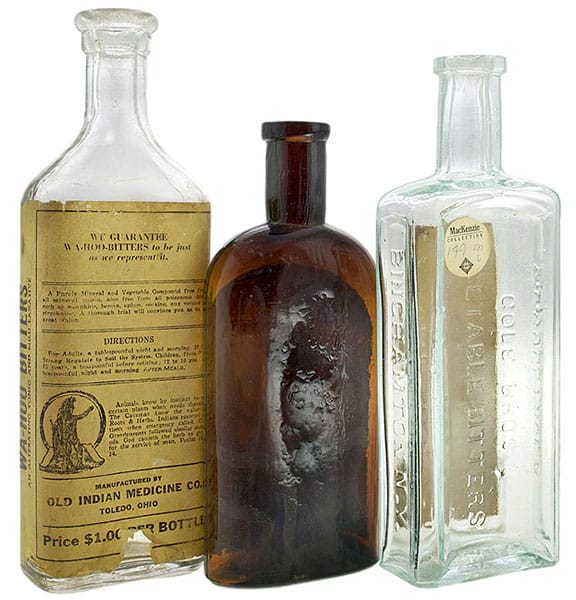 It is interesting, when you Google “Oswego Bitters” you pull up information about a cemetery and ghosts. The product name most likely is a double entendre. Here is an example:

Oswego Bitters: This former burial ground has been interning the dead here since the 1700s, when Oswego Bitter was settled northwest of the village of Camillus. The area’s name probably refers to herbs farmers from Oswego County harvested there in the 1800s, which came to be known as Oswego bitter or Oswego tea.  The cemetery’s surrounded by the Fletcher farm. The homestead is across the Bennett Corners Road. One of the neighbors reported a light in the cemetery and watch it for about 20 minutes. The light sort of moved around slowly, and then it dissipated.  This glow had a roundish, oval shape and maybe was 2 feet along and about the same off the ground. It moved back and forth, but up close, didn’t seem to light anything around it.   One resident has reported seeing the light four times over several years. – Syracuse Hauntings 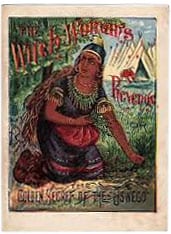 Here is a poor image (all I could find) of a sixteen-page booklet produced to market Austen’s Oswego Bitters in 1882. It contains a short story entitled, “The Witch-Woman’s Revenge; or, the Golden Secret of the Oswego.” It is about Winona, a beautiful Indian girl, who is forbidden by her mother (the “witch-woman”) to marry the son of the man who killed her father. These bitters guys used all kinds of angles to sell their product. Indians were a common theme.

Ferdinand Meyer V is a native of Baltimore, Maryland and has a BFA in Fine Art and Graphic Design from the Kansas City Art Institute and School of Design. Ferdinand is the founding Principal of FMG Design, a nationally recognized design consultation firm. Ferdinand is a passionate collector of American historical glass specializing in bitters bottles, color runs and related classic figural bottles. He is married to Elizabeth Jane Meyer and lives in Houston, Texas with their daughter and three wonderful grandchildren. The Meyers are also very involved in Quarter Horses, antiques and early United States postage stamps. Ferdinand is the past 6-year President of the Federation of Historical Bottle Collectors and is one of the founding members of the FOHBC Virtual Museum.
View all posts by Ferdinand Meyer V →
This entry was posted in Bitters, Errors, Medicines & Cures, News and tagged Austen, bitters, error, Ghost, girl, Golley, Ham, Indian, Medicine, Meyer, New York, Oswego, reverse, Winona, witch, woman. Bookmark the permalink.