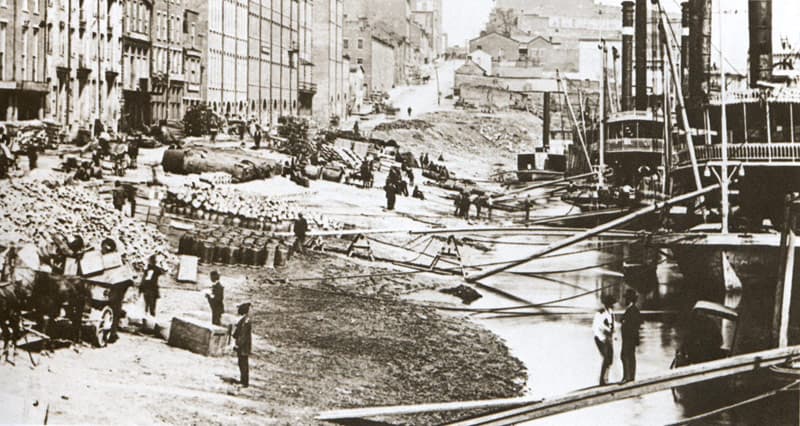 The Nashville Wharf, photographed shortly after the American Civil War

Yesterday I put up a post on C. G. Pendleton’s Tonic, The World-Renowned Stomach Bitters from Bridgeport Connecticut. The bottle dates from 1866 to 1867. There seems to be some confusion on the internet saying that this bottle is related to the Pendleton’s Pineapple Bitters from Nashville, Tennessee, which is probably from the same time period. The Bridgeport bottle was put out by Charles Gay Pendleton while the Nashville bottle was put out by John T. Pendleton. So what goes here for these Civil War era bottles? 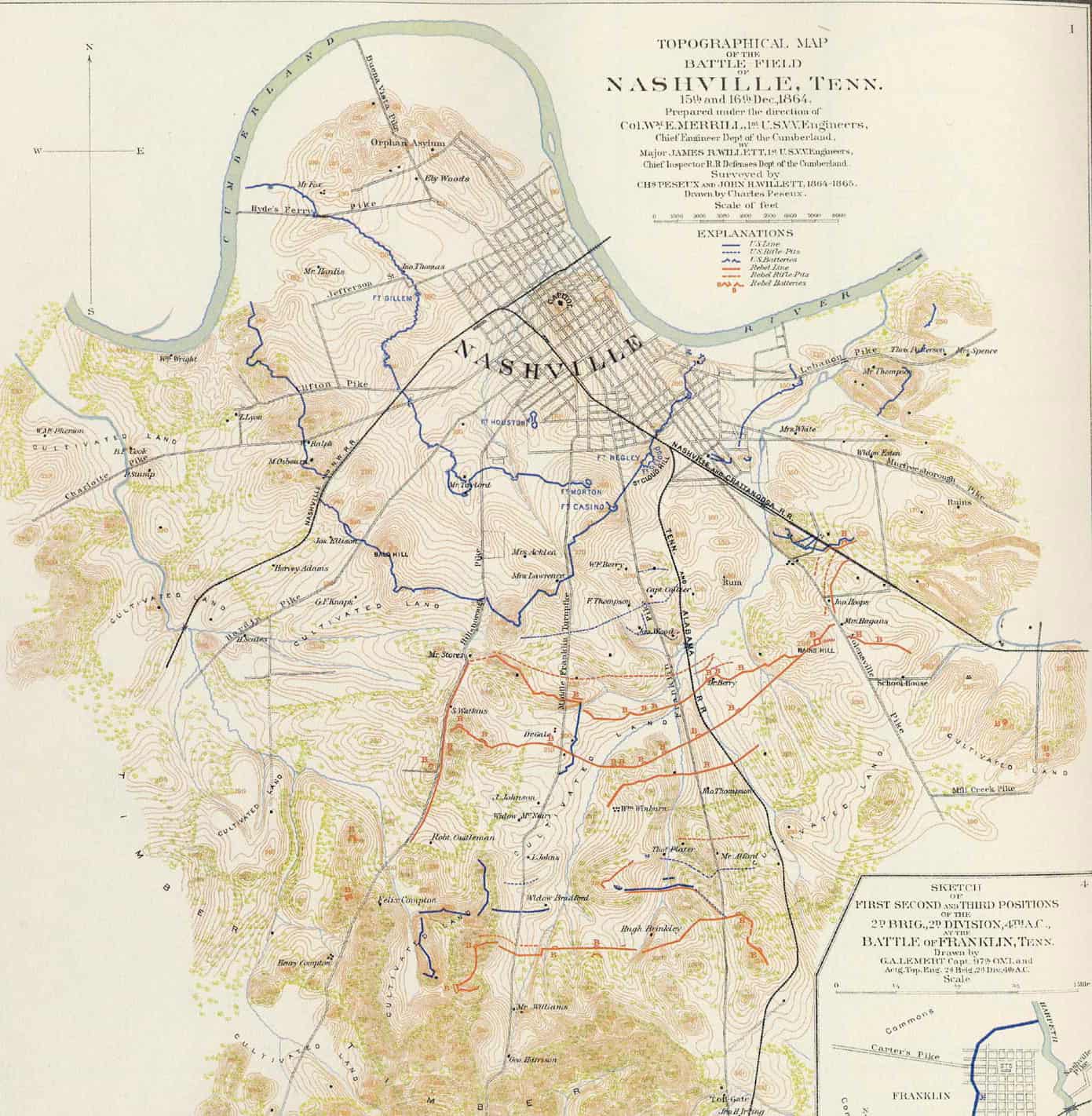 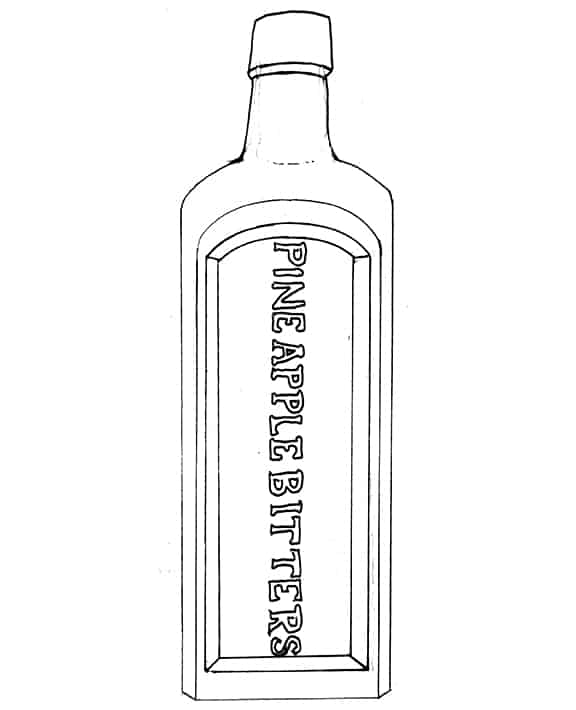 John Thompson Pendleton was born on 19 June 1815 in Christian, Kentucky. His parents were John Pendleton (1780-1838), and Frances Jackson Thompson (1784-1863). The father was from Spotsylvania, Virginia and the mother from Hanover, Virginia.

The story here really starts with the Ewin, Brown & Co. and then the Ewin Brothers (W.D. Ewin, John H. Ewin and William H. Ewin) who were wholesale and retail druggists in Nashville, Tennessee. You can see an 1851 Ewin, Brown & Co. and 1853 Ewin Brothers advertisement below. In 1858, John T. Pendleton partnered with John H. Ewin and they started Ewin, Pendleton & Company. They were wholesale druggists located on the Public Square in Nashville, Tennessee. 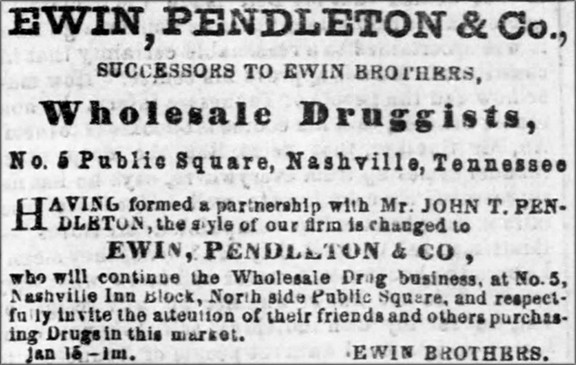 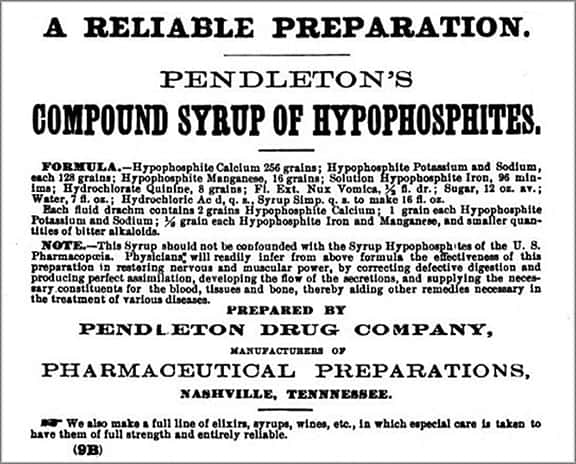 The L&W that is embossed on the bottle of the Pendleton’s Pineapple Bitters stands for Lorenz and Wightman in Pittsburgh, Pennsylvania (1862-1874). These guys were major bottle producers and their mark is known on a very large variety of bitters and medicine bottles and fruit jars.

Drugs and Chemicals in Nashville

Nashville and Her Trade for 1870: A Work Containing Information Valuable … By Charles Edwin Röbert

As a Wholesale Drug and Chemical Market, Nashville, it is said, is fully equal to any importing market in the West, both in the amount of its business, as well as its advantages, while the abundance of capital employed in its conduct, enables our dealers, at all seasons, to be well supplied with the amplest and most varied stocks to be met with in the Southwest, and which they are fully prepared to, and we believe do, undersell any competing market that is not extensively engaged in the manufacture of standard articles. As a class of merchants, they enjoy the most enviable reputation for liberality, fairness and reliability, while extended experience has not only been a good schoolmaster to them in the way of teaching them to select none but goods of the purest, freshest and most exact natures, but has given them decided knowledge of the wants and demands of the Southern trade. That they are uniformly conscientious in their figures, a steady and influential trade,—wedded to these, their idols, fully attests, and that they sell as low as can be sold from manufacturers’ first prices, is undeniable. Their stocks, as before stated, are always ample and well assorted, and embrace almost innumerable articles included under the general heads of Drugs, Chemicals, Medicines, Paints, Oils, Dye Stuffs, Perfumery, Fancy Articles, etc., etc., many of which are as familiar in the mouths of the “initiated” as household words.

They also deal largely in Window-Glass of all sizes and qualities) and a number of them carry on, in connection with their general business, the manufacture of various standard articles, such as “Bitters”, Perfumes, Soaps, etc., etc., all of which have an extensive sale, and are well-known by merchants trading with Nashville. They are also Importers of and Jobbers in various Pharmaceutical Implements and Surgeons’ Instruments, together with a legion of useful and highly necessary articles that are found in all first-class houses of their character.

These enterprising, extensive and responsible houses, five in number, to whom it gives us pleasure to refer to as representing the Wholesale Drug interests of Nashville, are as follows: Messrs. Berry, Demoville & Co., 5 and 6 Public Square; Ewin, Pendleton & Co., 58 Public Square; Kinkade, Handly & Co., 63 and 64 Public Square; E. P. Jenkins, 39 North Market; and Litterer & Cabler, corner Broad and Market streets. The sales of this trade last year amounted to fully nine hundred thousand dollars—at an underestimate. The limits of this branch of business penetrates into nearly every State in the South, and with its thirty-three and a third per cent increase over sales prior to the war, gives most fair and flattering promise of a wide future extension.

Nashville and Her Trade for 1870: A Work Containing Information Valuable … By Charles Edwin Röbert

The branch of business in our city coming under the above caption, is one that has come into notice within the last few years, and has grown to such formidable proportions that we give it prominence in a separate and special chapter. Our manufacturers and dealers in this line have admirably succeeded in introducing their health-giving preparations into all portions of the South; and persons who formerly purchased none but liquids, whose constituents, to say the least, were dubious, are using almost exclusively those manufactured in Nashville. Numerous advertising devices have been resorted to by them to bring their “Bitters” to the attention of the public, some of which are so novel and attractive as to challenge notice, be the observer never so dull and short-sighted. In truth, our “Bitter” men may be called the “Helmbolds of Nashville.” As we take it, this evidence of enterprise in advertising is pretty good evidence of the same admirable characteristic in the mode of conducting their business, and in this we fully believe Nashville Manufacturers are eclipsed by but few if any.

Jenkins’ Stomach Bitters. – Some two years ago Mr. R. P. Jenkins, Wholesale Druggist, No. 39 North Market street, introduced a preparation which he styled “Jenkins’ Stomach Bitters.” He claimed for them superior qualities as an antidote for all miasmatical disorders, dyspepsia and diseases of the stomach. So soon as they became fairly known in the country adjacent to Nashville, they grew rapidly in favor, and indeed attained such celebrity that he was induced to take out letters patent for their manufacture, and to-day they are extensively used in the South and Southwest. The Laboratory for the manufacture of “Jenkins’ Bitters” is established in connection with Jenkins’ “Wholesale Drug House, and in this department alone employment is given to a number of hands who are engaged in the various offices of decocting, bottleing, labeling and packing, so that at all times full supplies are ready for the market. Mr. Jenkins also makes and sells other specialties known as “Jenkins’ Buchu,” “Vandoin’s Fever and Ague Cure,” “Jenkins’ Vegetable Pills, etc., etc.

Berry & Demoville’s Orange Stomach Bitters. – The Wholesale Drug firm of Berry, Demoville & Co., Nos. 5 and 6 Public Square, are also engaged in the manufacture of a line of specialties that are rapidly coming into favor wherever they are known and used. Their “Fine Aromatic Orange Stomach Bitters,” although No. 39 North Market Street, opposite Union but recently introduced, yet, by their delightful aroma and agreeable flavor, are destined to have a successful and popular run. During 1869, as their books show, they sold upwards of 7,500 dozen of their Bitters. In this connection, we would take occasion to remark that this firm also manufactures quite a number of other Pharmaceutical preparations, which are made under their own personal supervision, a fact which stamps their reliability at once, and which, as they advertise, are not “patent nostrums,” but whose component parts are known to many leading physicians both in the city and country, most of whom have evinced their appreciation of their merits by prescribing them in their daily practice. The most prominent of these preparations are Demoville’s anti-Chill and Fever Pills, Demoville’s Compound of Prickly Ash, Demoville’s Jaundice and anti-Dyspeptic Tonic, Demoville’s Vegetable Cough Mixture, Demoville’s Compound Chloroform Liniment, Demoville’s Compound Dysentery Cordial, and Demoville’s All Healing Ointment.

Cotton’s Southern Star Stomach Bitters. – There is still another brand of “Bitters” manufactured in Nashville and but recently offered to the public. “We refer to the “Southern Star Stomach Bitters” manufactured by M. C. Cotton, 292 South Cherry street, a Chemist of well-known ability. The manufacturer, in his explanatory circular, says that “these Bitters are purely medicinal and arc presented to the public as a remedy prepared especially for the miasmatic diseases of the South,” and that their reputation as a medicine is stamped in the fact that no social license is required to manufacture and sell them. Already they present signs of much success, and are highly recommended by all who have used them. 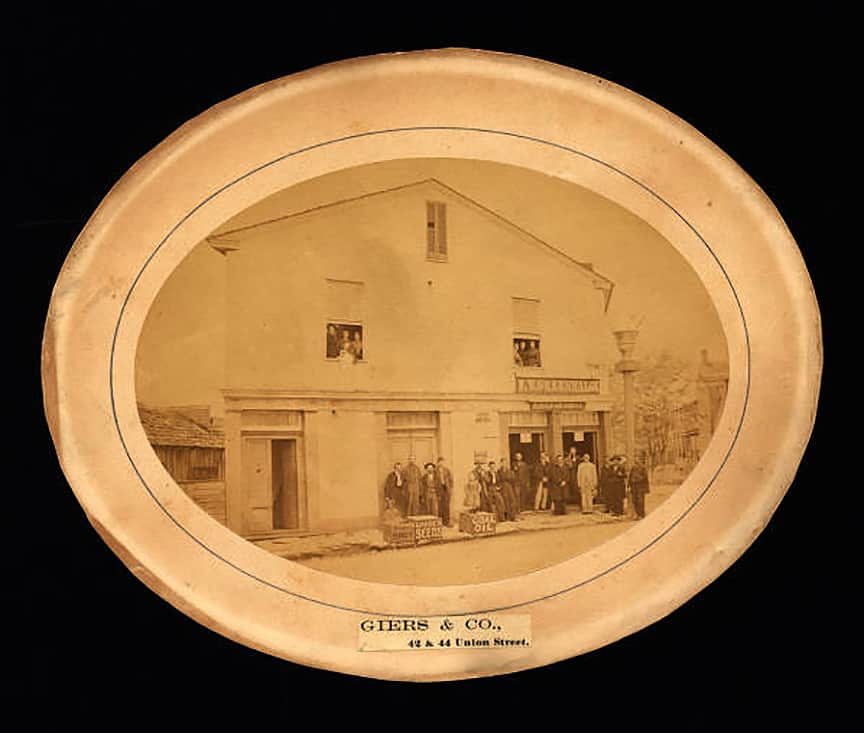 A photograph of the F.W. Greenhalge Apothecary at 7 Lafayette Street in Nashville, Tennessee. Taken in 1872, this photograph shows men and some children standing outside the storefront of the retail druggist. Nashville Public Library Digital Collections

Ferdinand Meyer V is a native of Baltimore, Maryland and has a BFA in Fine Art and Graphic Design from the Kansas City Art Institute and School of Design. Ferdinand is the founding Principal of FMG Design, a nationally recognized design consultation firm. Ferdinand is a passionate collector of American historical glass specializing in bitters bottles, color runs and related classic figural bottles. He is married to Elizabeth Jane Meyer and lives in Houston, Texas with their daughter and three wonderful grandchildren. The Meyers are also very involved in Quarter Horses, antiques and early United States postage stamps. Ferdinand is the past 6-year President of the Federation of Historical Bottle Collectors and is one of the founding members of the FOHBC Virtual Museum.
View all posts by Ferdinand Meyer V →
This entry was posted in Bitters, Druggist & Drugstore, History, Medicines & Cures, Questions and tagged bitters, brown, Druggists, Drugstore, Ewin, Kentucky, Nashville, Pendleton, Pineapple, Tennessee, Virginia, wholesale. Bookmark the permalink.