Is their a relationship between Grape Bitters by C.R. Smith & Company in Chicago? 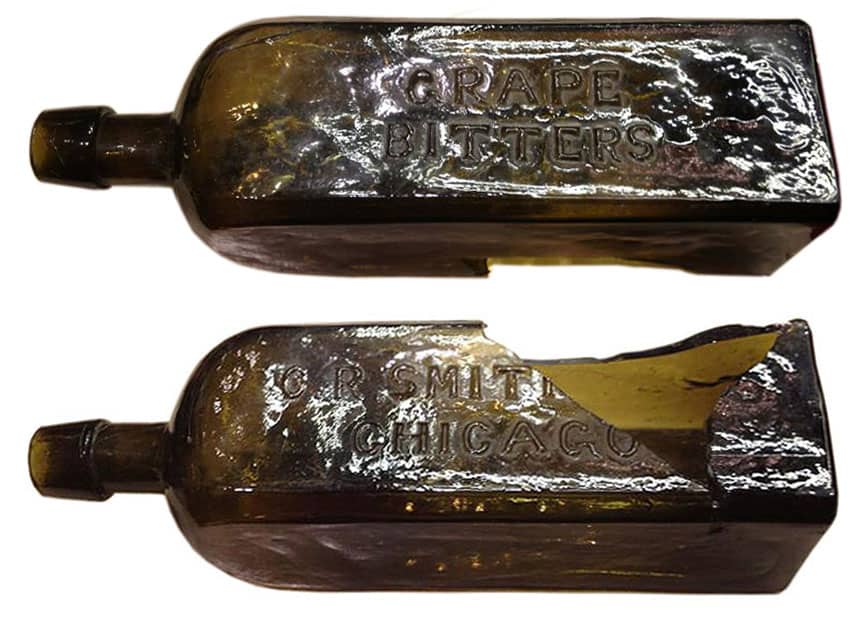 Is there a relationship between Grape Bitters by C .R. Smith & Company in Chicago and Dr. A.H. Smith’s Old Style Bitters from St. Louis?

Sorry for the long title. I though I recognized this bottle as it reminded me of another “Smith” bitters in my collection. Mark Nelson posted the above Grape Bitters pictures, which have been clipped in Photoshop, on the Peachridge Glass Facebook page. He added with the pictures, “a fellow friend/digger brought this bottle over to show me at the Milwaukee Bottle Show last month. A real cryer, but what a beautiful color. Now the search for a complete example is underway!”

I asked him more about the embossing and he replied, “I believe C.R. Smith Chicago” and the other side is “Grape Bitters”!

First of all, we need to figure out who C.R. Smith is? In Bitters Bottles by Ring and Ham,  Grape Bitters has “C.R. Smith & Co.” embossed on the bottle. I wonder if this is a simple bottle-making error and if the “C” could be a “G”? I say this because I can not find any information on this C. R. Smith in Chicago. The Carlyn Ring and W.C. Ham listing in Bitters Bottles is as follows: 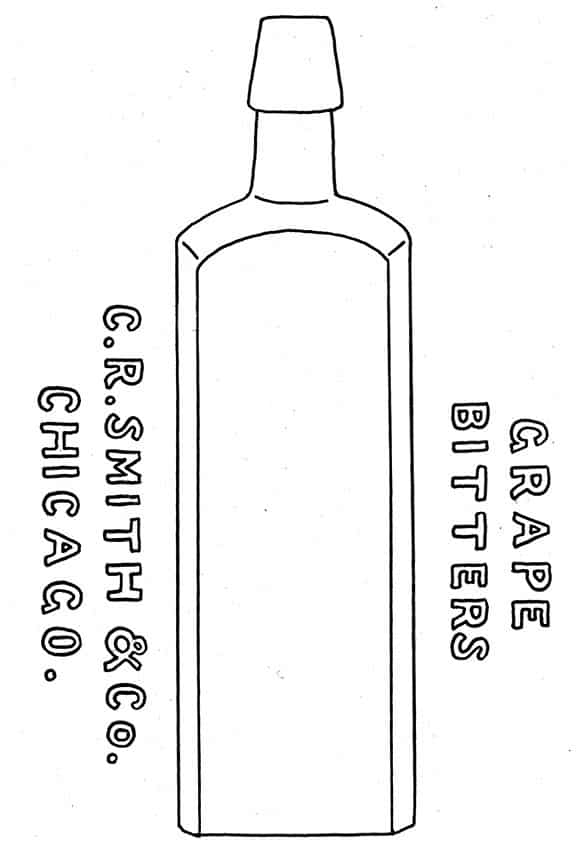 What is odd is the notation above in Bitters Bottles of a trademark dated June, 1881, by Chas. W. Robinson of Detroit, Michigan. There was a Charles W. Robinsoin in Detroit around that time but he worked for the Detroit Seed Company. There is also a second notation for a Trademark dated July, 1881 by John F. Haberstro in Buffalo, N.Y. I need to track down Eric McGuire on these trademark questions.

What I do find is very interesting.

Alex B. Morean initially established the drug business in 1836. He was succeeded by a drug concern named White & Ware. For a few years the firm continued until Mr. White dropped out. G. W. Ware, then became the sole proprietor and was succeeded in 1882 by G. R. Smith & Company. Their 2-story building was 22 feet wide, by 60 feet in depth and was erected in 1865 at the cost of $6,000. They typically carried stock that was valued at $8,000.

Gregory R. Smith was the son of A. H. Smith and Amanda (Robinson) Smith. His father was from New Jersey and his mother was from Virginia. He was born in Kane, Greene County, Illinois on July 1, 1857. He was educated in the schools of Carrollton and subsequently learned the drug business from his father and older brothers. In 1882 he came to Jerseyville and succeeded G. W. Ware in the drug business, the firm now being G. R. Smith & Company. His brother Edward Smith, was his partner. They also had a drug store in Carrollton. He was described as an enterprising business man and popular druggist. His assistants were Will S. Pittman and Ralph Vandenburg.

Mr. Smith was honored with a number of positions of responsibility during his residence in Jerseyville. He was a member of the Society of Knights of Pythias and was elected city Treasurer on the democratic ticket in 1887-88. He was also president of the Jersey County Gun Club, treasurer of the Citizens Association and secretary and treasurer of the city Fire Department. Gregory Smith died at his home in December, 1910 in Jerseyville.

Whether Gregory R. Smith put out the Grape Bitters, I think we have now identified his father, A. H. Smith with more substance as the proprietor of A. H. Smith’s Celebrated Old Style Bitters. I have actually written about this before. Read: Dr. A.H. Smiths Old Style Bitters – O.S. 2781

The Carlyn Ring and W.C. Ham listings in Bitters Bottles for the Smith’s Celebrated Old Style Bitters is as follows: 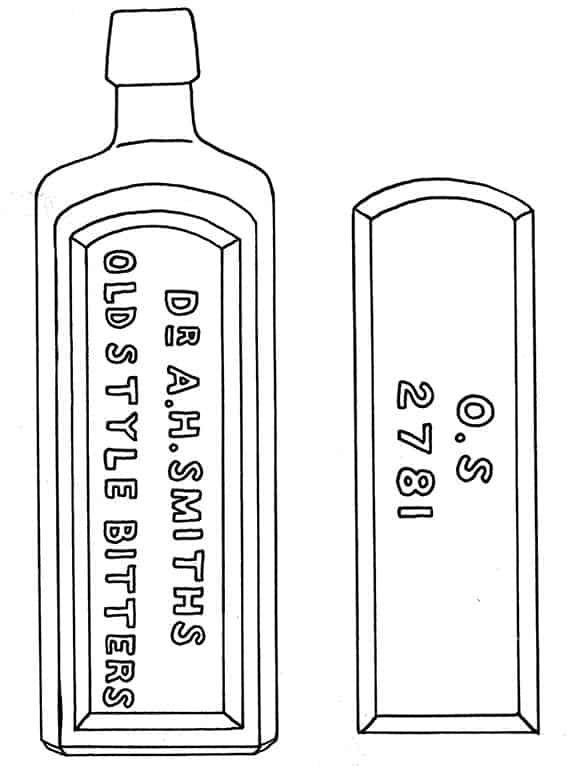 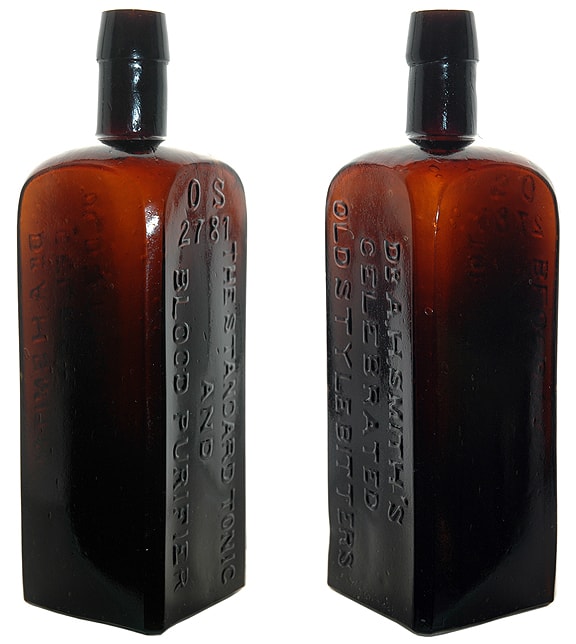 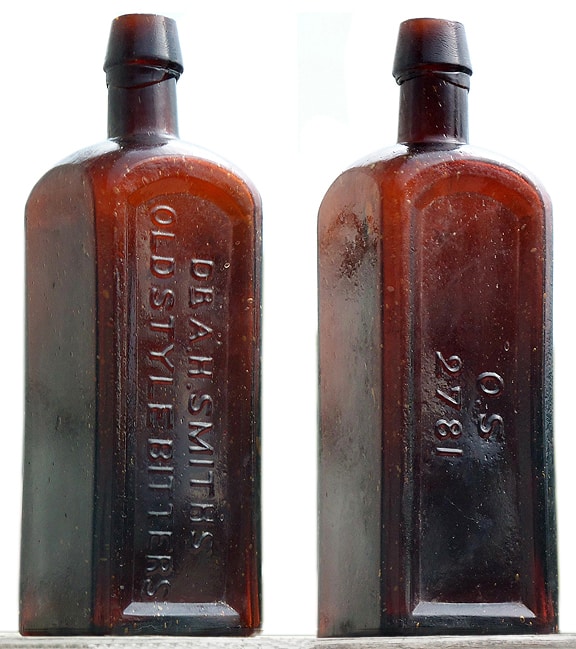 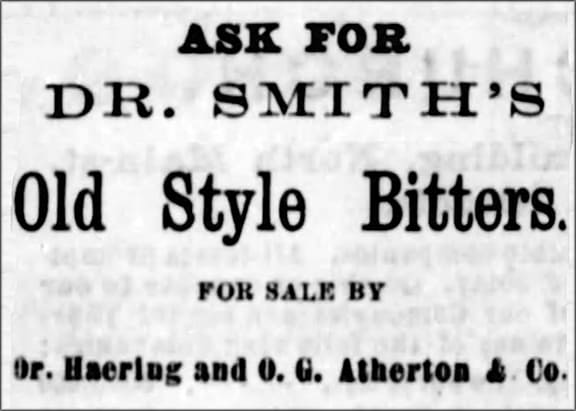 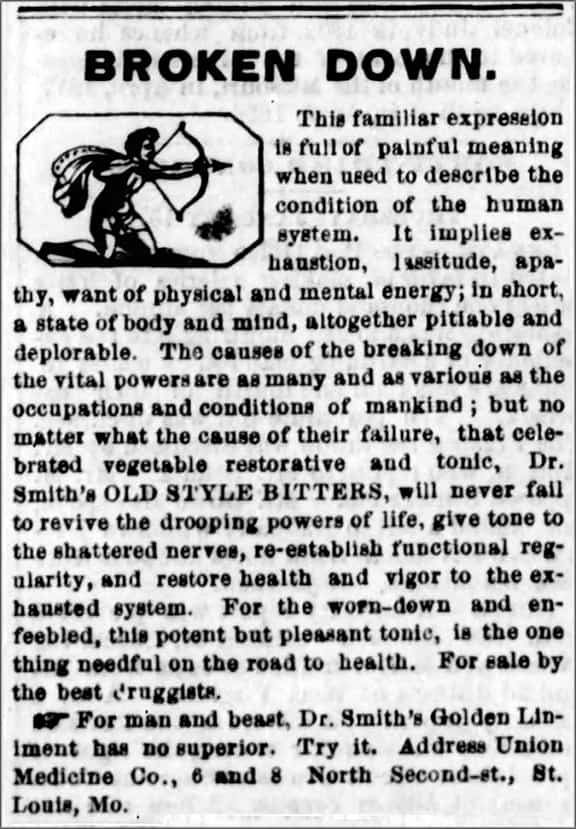 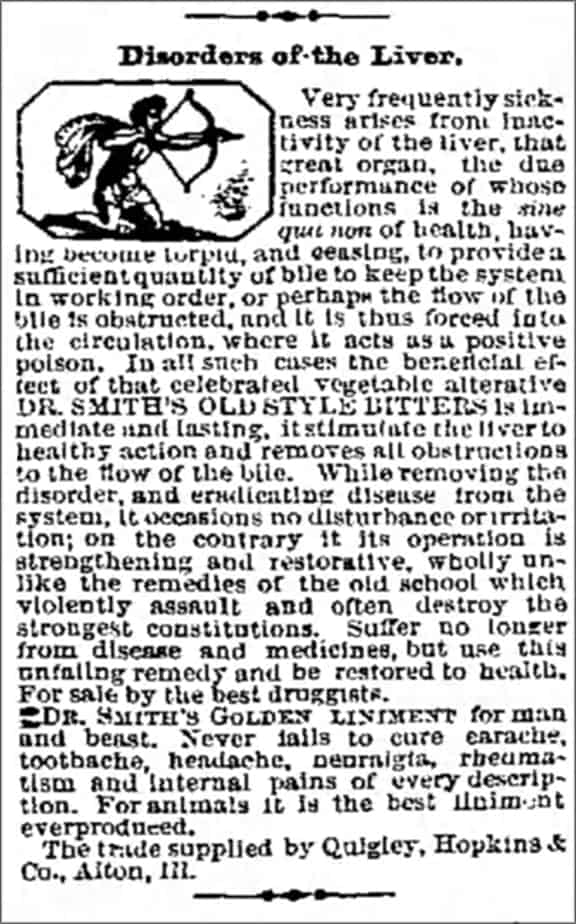 SMITH, C. S. dry goods merchant, Kane, Ill. The above named gentleman was born in Greene in 1846; oldest son of Dr. A. H. Smith, the well-known physician and druggist of Carrollton; he passed his early years in Carrollton, where he received a liberal education; for a short time he became employed as a clerk; during the Autumn of 1870, locating at New Kane, where he entered into a co-partnership business with John Greene. Both members were men of enterprise and sagacity, and their business soon became a large and growing one; the new firm sold goods for a period of two years in a large brick building owned by A. Felter; owing to increasing business, and desiring a better location, they decided to erect their present building, by far the best store house in the town, where a business is transacted that will compare favorably with any similar establishment in Kane. In September 1875, Mr. Smith was united in marriage to Miss Jennie Hobson, a daughter of Robert Hobson. One child born of this, Florence.

I will focus more on C. R. Smith from Chicago. There is probably a stone I have not turned.

1882: In 1867 Mr. Ware erected a commodious store building and conducted the business alone until about 1882, when he sold out his business to G. R. Smith & Co., the present south State street druggists. – JERSEYVILLE, ILLINOIS

1910: Gregory R. Smith, for thirty years a druggist of Jerseyville, Illinois, died at his home, December, 1910. He was fifty-four years of age. Mr. Smith had held many public offices and was Alderman for several terms. – Meyer Brothers Druggist, Volume 32, 1911 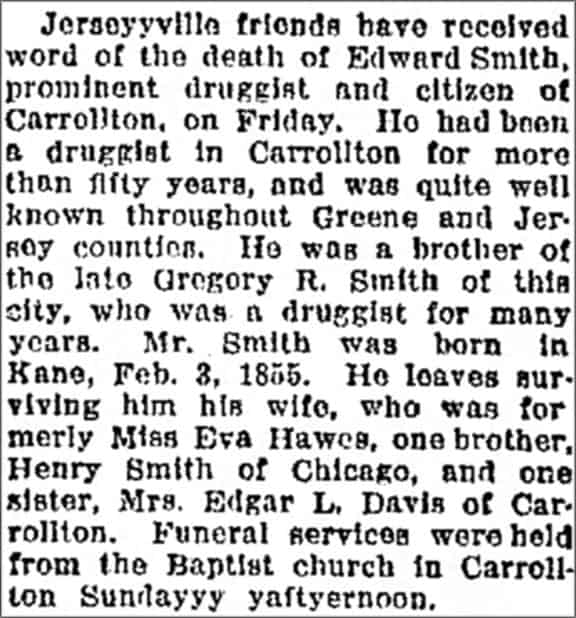 Ferdinand Meyer V is a native of Baltimore, Maryland and has a BFA in Fine Art and Graphic Design from the Kansas City Art Institute and School of Design. Ferdinand is the founding Principal of FMG Design, a nationally recognized design consultation firm. Ferdinand is a passionate collector of American historical glass specializing in bitters bottles, color runs and related classic figural bottles. He is married to Elizabeth Jane Meyer and lives in Houston, Texas with their daughter and three wonderful grandchildren. The Meyers are also very involved in Quarter Horses, antiques and early United States postage stamps. Ferdinand is the past 6-year President of the Federation of Historical Bottle Collectors and is one of the founding members of the FOHBC Virtual Museum.
View all posts by Ferdinand Meyer V →
This entry was posted in Bitters, Collectors & Collections, Digging and Finding, Druggist & Drugstore, History, Medicines & Cures, Questions and tagged bitters, Celebrated, chicago, drug, Druggist & Drugstore, Grape, Gregory, Henson, illinois, Jersey, Jerseyville, Meyer, Missouri, Nelson, Old, Smith's, St. Louis, style, Union. Bookmark the permalink.