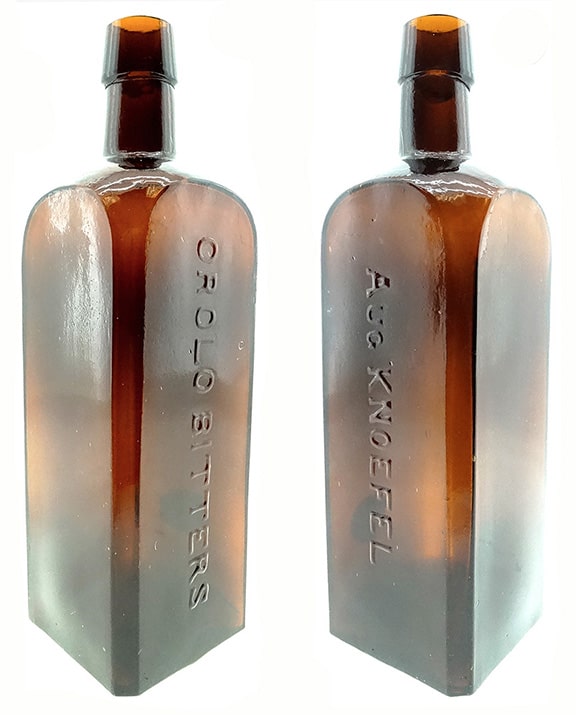 Hard drinking and fast women are said to be causes.

I did not win some bottles yesterday but it was not for “Hard drinking and fast women” which affected one of our characters in todays story. Jeff Wichmann over at the new Sales Page at American Bottle Auctions posted another grouping of fine bottles at noon Pacific time yesterday. The posting was so anticipated that his web site crashed. Oh well. It is refreshing to see these exciting bottles in this format (read what I really thought). You win some and you lose some for various reasons. Visit American Bottle Auctions Store 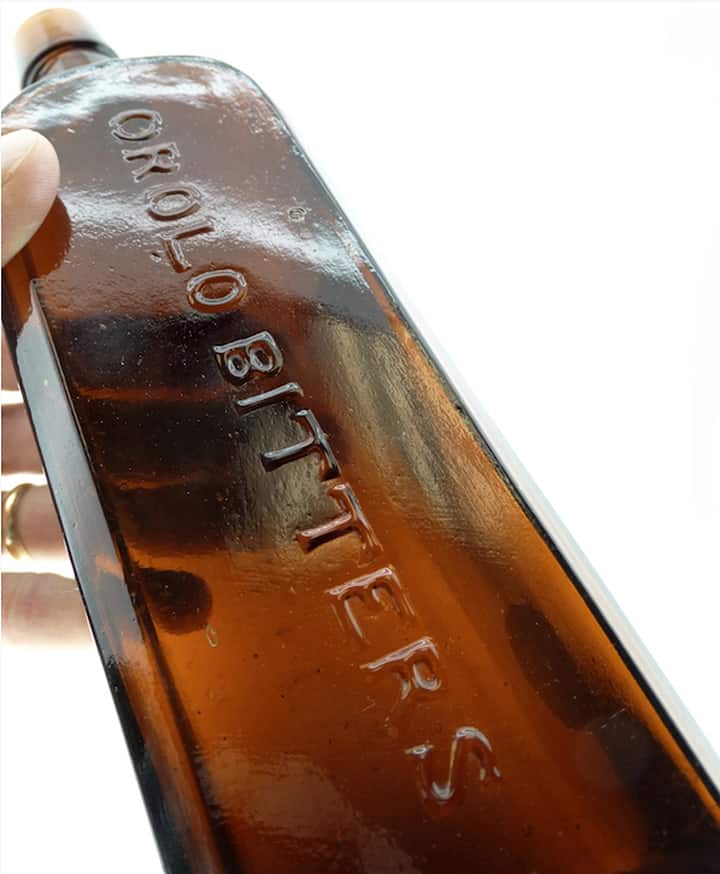 OROLO BITTERS/Aug KNOEFEL W.McC & co. on base 9”. (O-89) This is an amber fifth we do not see a lot of. We believe there have been about four change hands in the last many years. This example came from the MacKenzie Collection sold by Norman Heckler. While at the time it was probably looked at with no special interest, these extremely rare amber fifths are coming into their own and rightfully so. Condition is about perfect and the base appears quite old. Probably an early 80’s, bottle, light but pretty solid crudity with a crudely applied top. Grades 9.7. – American Bottle Auctions Sale Page 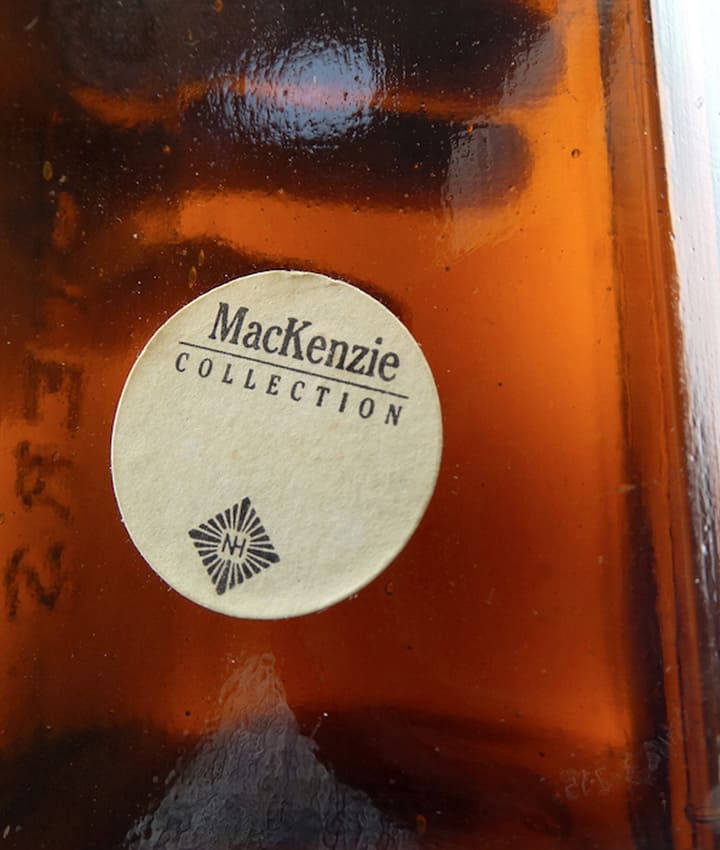 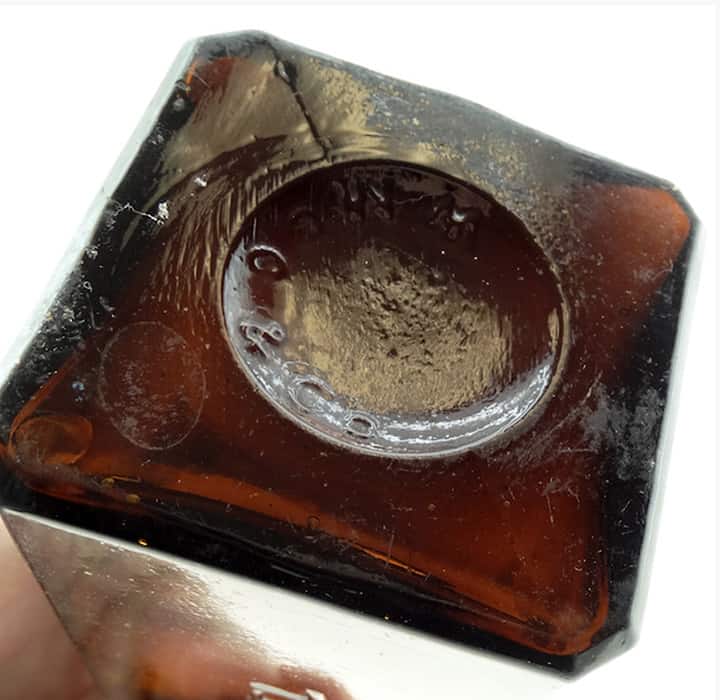 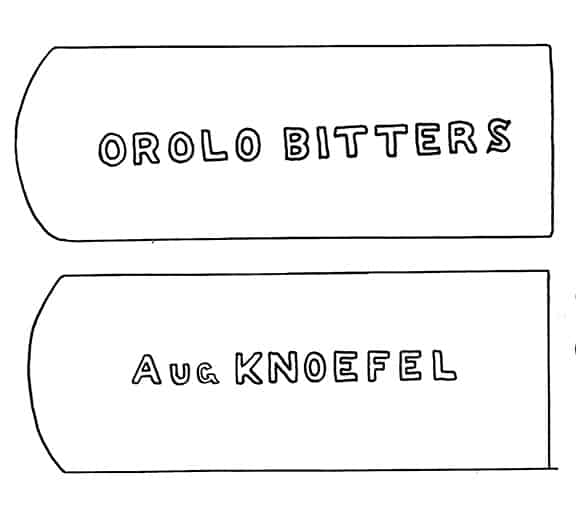 Dr. August Knoefel, also known as Otto, was one of New Albany, Indiana’s most worthy, prominent and wealthy German citizens. New Albany, somewhat of a bedroom community now, is across the Ohio River opposite Louisville. He was married to Dorothea Wilhelmine Knoefel and had seven children; four sons, Robert B., Charles D., Bruno Ernst and Carl F. Knoefel, and three daughters, Emma Caroline, Florence, and Minnie D. Knoefel. Two of his sons would follow him in the druggist business while another would become a doctor.

August Knoefel was born in Niedergrauschiortz, Saxony, Germany, in 1824. When he was a young man, he began the study of drugs and received a pharmaceutical education. At the age of 24 years, right after his marriage, he left Germany with his wife for America, landing at New York in 1848. He came to America with the Honorable Carl Schurz, and others who took part in the German revolution of 1848. From there he went directly to Pittsburgh, where he secured a position in a drug store. From Pittsburgh he came to Louisville, where he served several years as assistant druggist and surgeon in a city hospital. 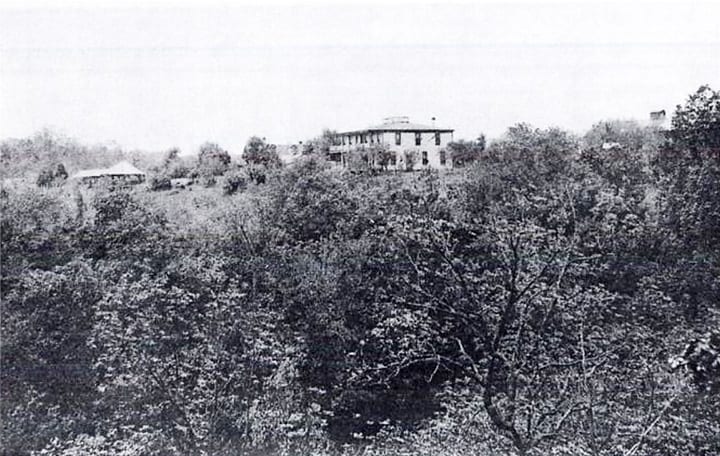 In 1849, Charles Knoefel built a hotel and summer residence in Orolo Heights (present day Grandview) Indiana. It was reported that Knoefel harbored runaway slaves as they headed out of the valley. He also employed blacks at his hotel. Knoefel had his first drug store about this time in the front part of Wesley Chapel Methodist Church, or “The Old Ship of Zion” as it was called. It was located at the corner of First and Market Streets.

In 1858, Knoefel opened a drug store on West Market street in New Albany, where up to the time of his death, he remained. During this period, Civil War records show August Knoefel enlisting in June 1863. He ended up occupying this pharmacy for nearly 38 years. Dr. Knoefel died on December 7th, 1894, at his summer residence in Orolo Heights, after an illness of two weeks, of pneumonia. Several months before his death he sustained a paralytic stroke.

“he was the manufacturer of the well known and popular remedy, Knoefel’s orolo bitters.”

The Orolo Bitters was named after August Knoefel’s summer residence and was made at the William McCully & Company Glassworks in Pittsburgh between 1870 and 1880. The bitters product was so successful it was mentioned in his obituary…“he was the manufacturer of the well known and popular remedy, Knoefel’s orolo bitters.”

Charles D. Knoefel and Ernst Bruno Knoefel would join August Knoefel in his drug store business. Charles D. Knoefel attended the public schools of New Albany, after leaving which he pursued a course at the College of Pharmacy, at Louisville, Kentucky. Returning to New Albany he became associated with his father in the drug business, and remained with the until 1885, at which time he established a pharmacy of his own. It was Robert B. Knoefel who ran afoul and absconded with some money (read story further below). 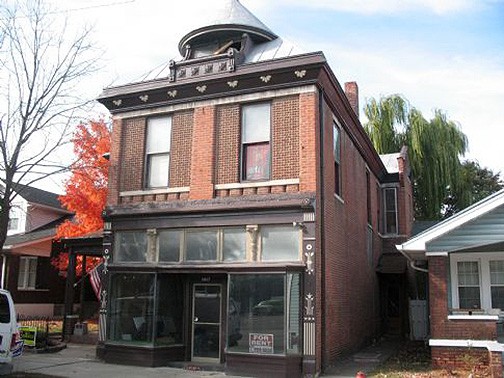 The building above was constructed in 1892 at a cost of $3500, replacing an earlier structure on the site. It was home and residence of Ernst Bruno and Caroline Knoefel. The building is believed to have been designed by noted New Albany architect Milton C. Pritchett, who resided in Silver Hills and had offices in Louisville and in Beford, Indiana. Druggist Bruno Knoefel began working in the business as a clerk at his father’s store. By 1888, he had his own drug store, located at 1421 East Spring Street. Bruno was a charter member of the Indiana Pharmaceutical Association and held license number one. He also served two terms as president of the association. After moving to this location, he remained in business until the early 1920s, when Eugene Endris took over the establishment.

1881: Dr. Aug. Knoefel was yesterday presented with an elegant cane by his picnic friends in appreciation of the happy hours spent by them at his rural residence at Orolo Heights, north of the city. – The New Albany Ledger-Standard, May 16, 1861 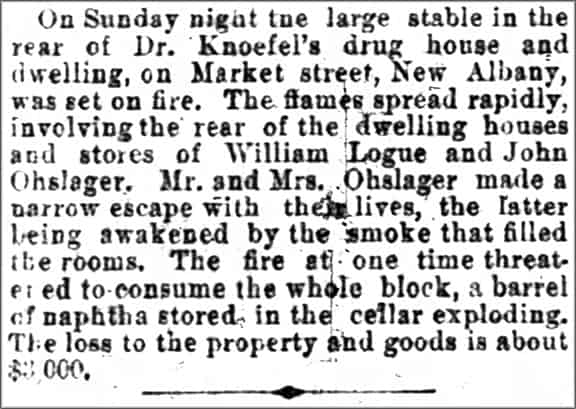 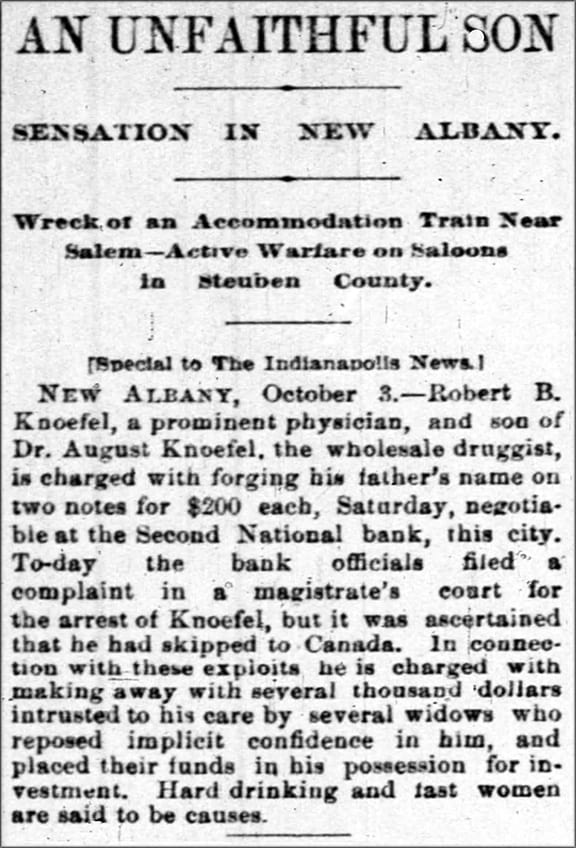 1894: Death of August Knoefel (see below) – NEW ALBANY. Dec. 7. Special. August Knaefel, aged seventy years, died last night. He was a well-known and highly respected citizen and for over forty years he was engaed in the drug business and “was the manufacturer of the well known and popular remedy, Knoefel’s orolo bitters. – The Indiana State Sentinel, December 12, 1894

Ferdinand Meyer V is a native of Baltimore, Maryland and has a BFA in Fine Art and Graphic Design from the Kansas City Art Institute and School of Design. Ferdinand is the founding Principal of FMG Design, a nationally recognized design consultation firm. Ferdinand is a passionate collector of American historical glass specializing in bitters bottles, color runs and related classic figural bottles. He is married to Elizabeth Jane Meyer and lives in Houston, Texas with their daughter and three wonderful grandchildren. The Meyers are also very involved in Quarter Horses, antiques and early United States postage stamps. Ferdinand is the past 6-year President of the Federation of Historical Bottle Collectors and is one of the founding members of the FOHBC Virtual Museum.
View all posts by Ferdinand Meyer V →
This entry was posted in Bitters, Druggist & Drugstore, History, Remedy and tagged August, Bruno, Charles, drug, Druggist & Drugstore, Ernst, Germany, indiana, Knoefel, Louisville, MacKenzie, New Albany, Orolo, pharmacy, Robert, Saxony, slaves, Wichmann. Bookmark the permalink.