So who is Dr. Buzzell? 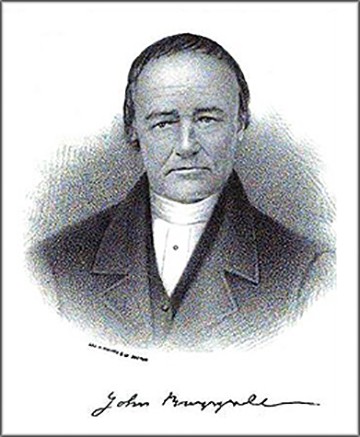 So who is Dr. Buzzell?

So who is Dr. Buzzell? At first when I found a Dr. Buzzell’s bitters advertisement (below) while working on the Globe Tonic Bitters (Portland, Maine) post, I thought we might have an unlisted bitters. That is not so. Dr. John D. Buzzell’s Vegetable Bilious Bitters was advertised in 1844 and 1845 in Maine and later we have a patent in 1895. What is going on here? Why the big time gap? Why does the Ring & Ham B 279 reference in Bitters Bottles reference a N. Wood, Portland, Maine bottle that is also referenced as W. 147.1? Are you confused? Me too. And who is the guy with the drooping eye at the top of the post?

The Carlyn Ring and W.C. Ham listing in Bitters Bottles for the Dr. Buzzell’s Vegetable Bilious Bitters is as follows. Notice the N. Wood Portland Maine bottle illustration used for the brand. 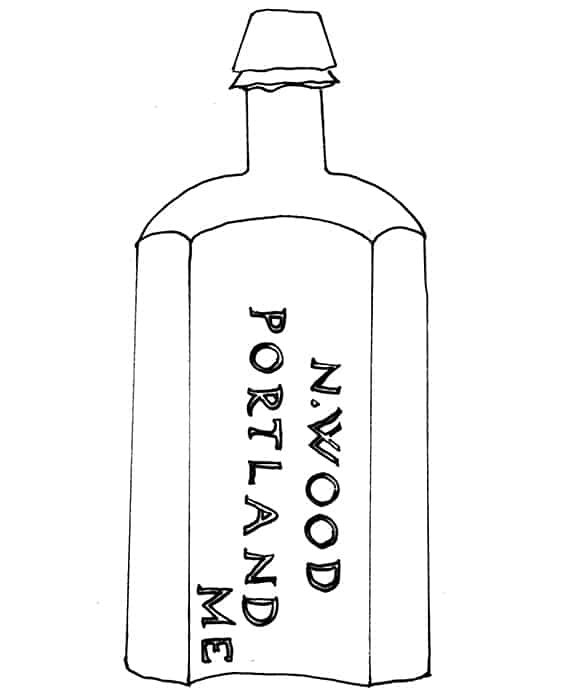 These bitters are a sure cure for loss of appetite, foulness of the stomach, costiveness, dizziness, headache, jaundice, asthma, dropsy, rheumatism, indigestion, dyspepsia, faintness and sinking at the stomach, eruptions on the face and neck and as a purifier of the blood, they stand unequaled 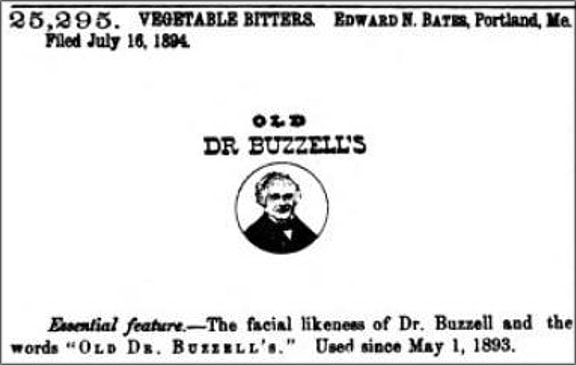 The key here is understanding that James M. Buzzell (born about 1812) was the son of Reverend John Buzzell (1767-1863). John D. Buzzell’s Family Medicines is referenced on the tall advertisement above from 1844. James came from a family of doctors, he being one of three brothers (Luke, Alvah and James Buzzell) to enter the medical profession. James started his medical career in 1836 and was an eclectic physician and surgeon. The Eclectic movement, was a 19th-century botanical branch of American medicine that operated from 1825 through 1939. The Eclectics spent more than 114 years studying North American medicinal plants for use in botanical remedies along with other substances and physical therapy practices. James Buzzell was also the proprietor of Buzzell’s Vegetable Tonic Bitters. He must have picked up the recipe from his father, John before Reverend Buzzell found his calling as a man of God. He was also the proprietor of several other tonic medicines, a Vegetable Blood Cordial, a remedy for dyspepsia and as noted, the Tonic Bitters. You could obtain these yourself from Dr. Buzzell, at his office at the corner Pearl aud Federal Streets., where during office hours he was seeing patients.

The Buzzell family would have known Nathan Wood (1812-1877) in Portland, Maine as Wood was an agent for their medicine. James Buzzell and Nathanial Wood were also both born in 1812 in the same area. His name is not at the bottom of the 1844 advertisement above. Probably a year or two, too early. Nathan Wood began as a dealer in Botanic medicines in Portland in 1844 or so and remained in business as Nathan Wood & Son until 1913. Soon after starting the business, he had bottles embossed with his name and they contained a variety of prescriptions with only a label to identify the brand. As you can see from my example below, the bottle contained N. Woods Improved Vegetable Bitters. To demonstrate this, you can see on the 1875 receipt below, an order for 3 1/4 dozen Buzzell’s Bitters for $13. So N. Wood was obviously in a business relationship with James M. Buzzell, albeit down the road time-wise.

A Lible Suit Avoided! The Libeller Exposed….. The Truth Triumphant! Tell Your Neighbors that Nathaniel Wood … Atwood’s Jaudice Bitters Caution. No One Has a Right to Manufacture Atwood’s Genuine Physical Jaundice Bitters … Except Nathan Wood, Portland, Me.

And the guy with the drooping eye at the top of the post? He is Reverend John Buzzell where this all started. He certainly doesn’t have the “Einstein” look used for the trademark for Old Dr. Buzzell’s Vegetable Bitters. If you look close enough, it could be a similar illustration.

Prominent among the Physicians and Surgeons of this city, stands James M. Buzzell, M.D. His name and reputation are well-known to most people in Portland, for he has been a successful practitioner for more than half a century, having begun his career in 1836. Dr. Buzzell is a native of Parsonsfield, Me., and is the son of Rev. John Buzzell, and comes of a family of Doctors, he being one of three brothers to enter the medical profession. Dr. James M. Buzzell was graduated at Dartmouth College, after which time he spent a number of years teaching. He has occupied the position of Professor or teacher in five different Colleges. His career as physician and surgeon has been one of long-standing and wide experience, aud he has been successful in operations and cures, which from their delicate nature, men of less experience and confidence, have been fearful of trying. That dreadful disease, Cancer, has always been called incurable, and for its advanced stages, no remedy has yet been found. Dr. Buzzell, however, has remedies which for superficial Cancer, are surer than the knife, and for this alone he deserves the thanks of suffering humanity. His remedies for other serious diseases, notably tumors and scrofulous troubles, as well as others of various natures, have proved most efficacious. Dr. Buzzell is the proprietor of several excellent tonic medicines, a Vegetable Blood Cordial, a remedy for dyspepsia and Tonic Bitters. These can be obtained from Dr. Buzzell himself, at his office, corner Pearl aud Federal Sts., where during office hours he is always ready to see patients.

The Carlyn Ring and W.C. Ham listing in Bitters Bottles for the N. Wood Vegetable Bitters is as follows: 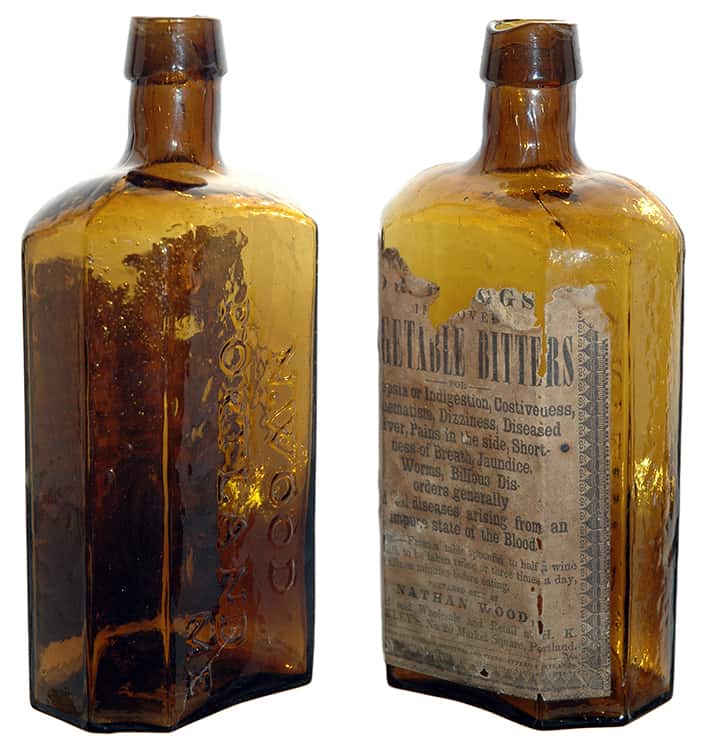 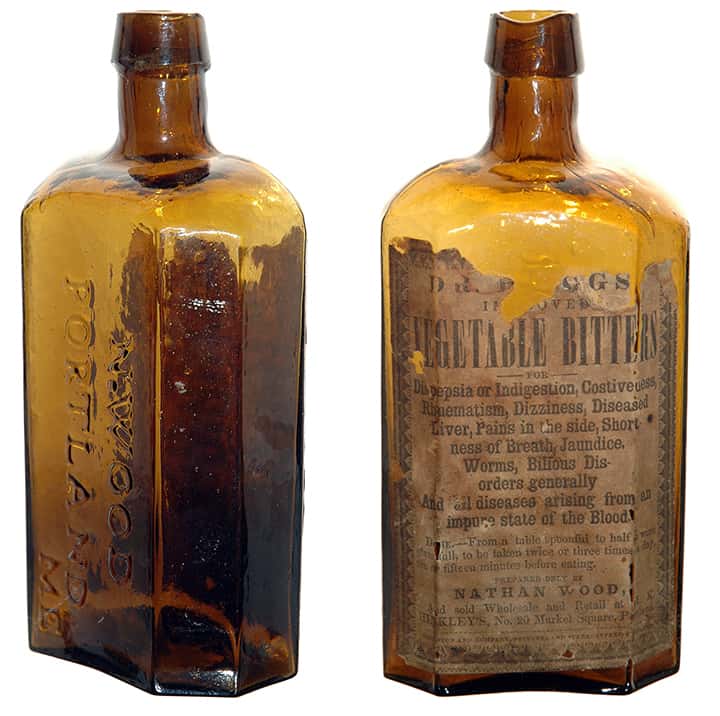 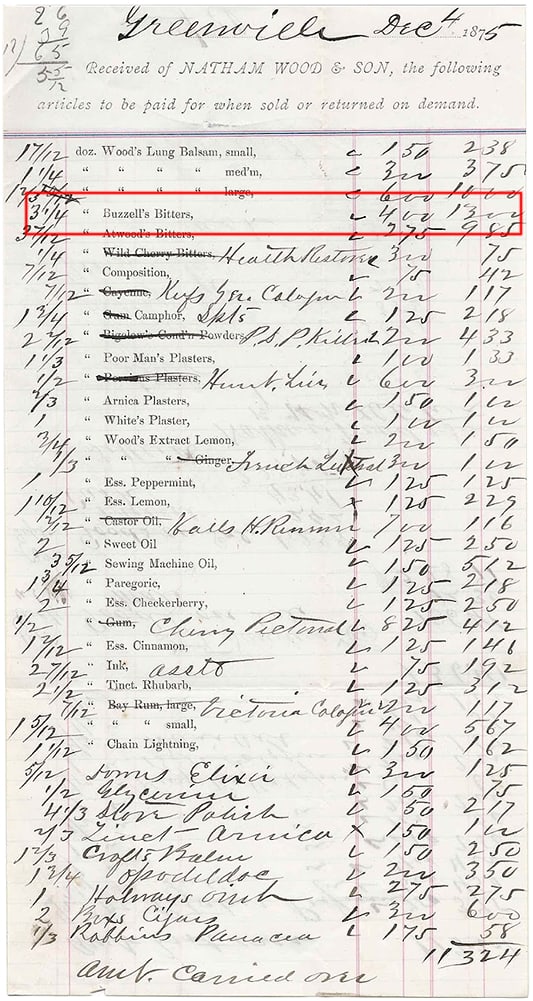 Ferdinand Meyer V is a native of Baltimore, Maryland and has a BFA in Fine Art and Graphic Design from the Kansas City Art Institute and School of Design. Ferdinand is the founding Principal of FMG Design, a nationally recognized design consultation firm. Ferdinand is a passionate collector of American historical glass specializing in bitters bottles, color runs and related classic figural bottles. He is married to Elizabeth Jane Meyer and lives in Houston, Texas with their daughter and three wonderful grandchildren. The Meyers are also very involved in Quarter Horses, antiques and early United States postage stamps. Ferdinand is the past 6-year President of the Federation of Historical Bottle Collectors and is one of the founding members of the FOHBC Virtual Museum.
View all posts by Ferdinand Meyer V →
This entry was posted in Advertising, Bitters, Druggist & Drugstore, History, Medicines & Cures, Questions, Tonics and tagged Bilious, bitters, Botanic, Buzzell, Doctor, Eclectic, family, James, John, Maine, Medicine, Nathan, Portland, Reverend, Vegetable, wood. Bookmark the permalink.