You know, I like bitters bottles. Collecting them, tracking them, researching, buying, selling, trading, winning, recording, photographing, writing, blogging etc. Kinda hooked. It has gotten to the point that it fills my life and consumes my time. When I am not thinking or doing something involving bitters, I get that “caged-in feel”. Like a bird in a cage, or one of my many dogs needing a run, I get restless. Imagine my surprise to be released from this caged-in feeling when I received this e-mail and related bottle pictures from Tim Henson in Missouri:

“I picked up this very rare Kagy’s Superior Stomach Bitters that is from Ottawa, Illinois. A pretty tough dude. A friend of mine was talking to Ken Farnsworth who put out the Illinois book (Bottled in Illinois: Embossed Bottles and Bottled Products of Early Illinois Merchants from Chicago to Cairo, 1840-1880 by Kenneth B. Farnsworth and John A. Walthall) and he told him that he only knew of one other himself. You just never know what might show up…..” 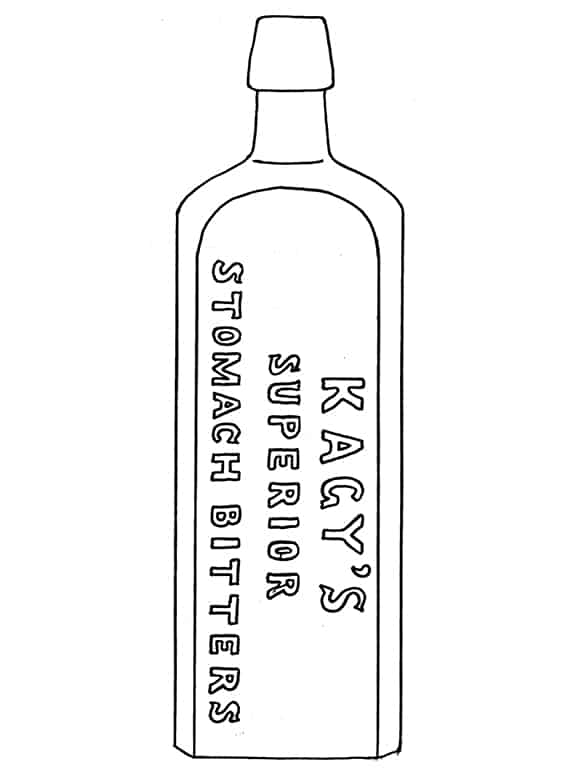 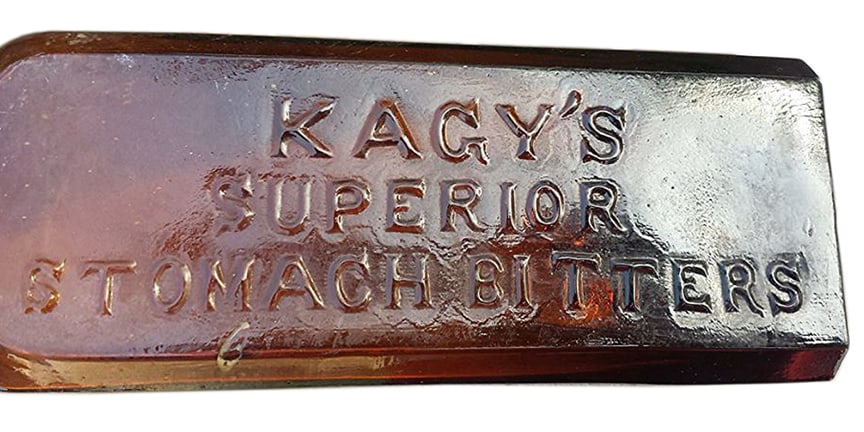 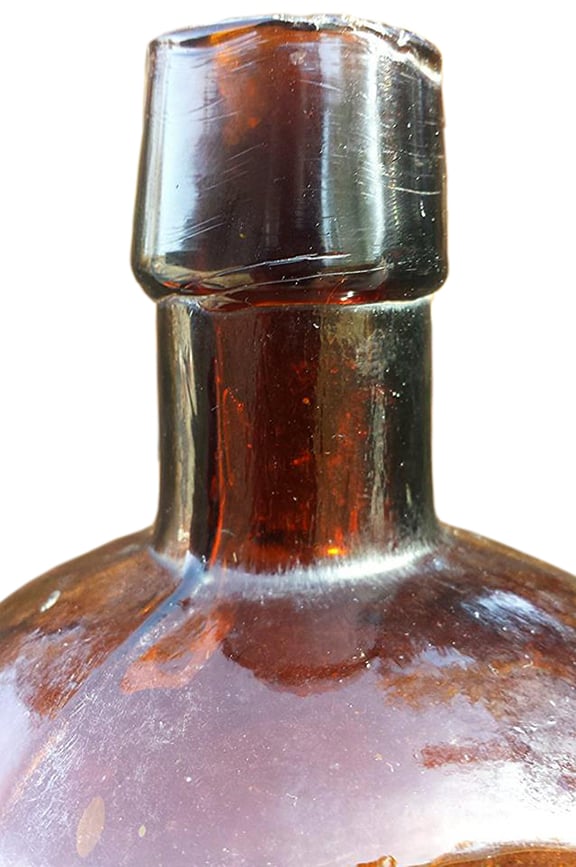 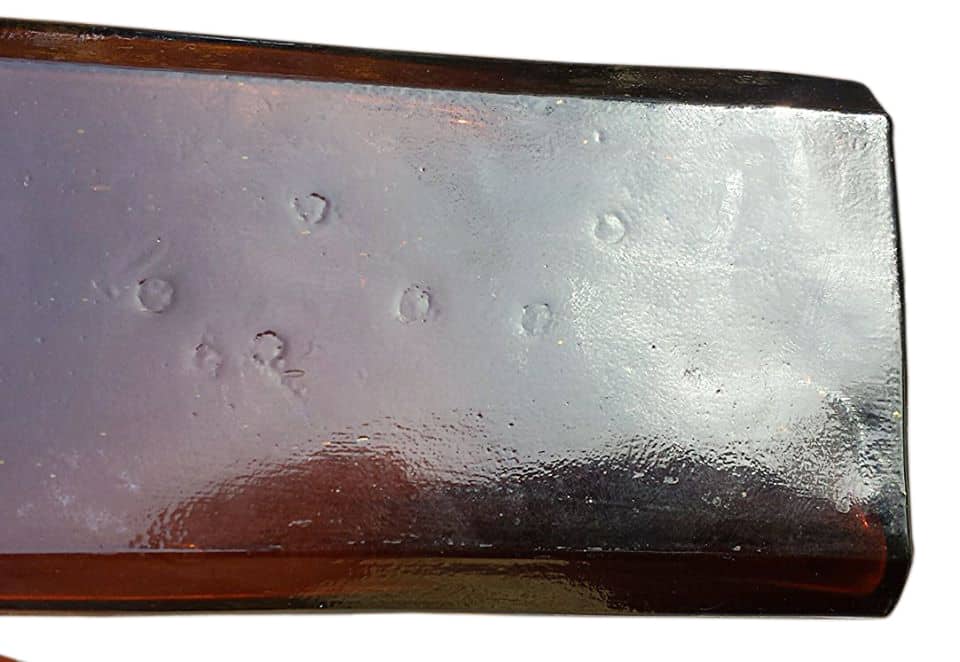 The newspaper advertisement below, from the The Ottawa Free Trader, on 9 December 1871, lays it out for the K. S. S. B. – Kagy’s Superior Stomach Bitters. The notice says the product was put out by A. A. Kagy, Sole Manufacturer, Ottawa, Illinois.

This would be Aaron Albert Kagy. Kagy’s Superior Stomach Bitters was a short-run bitters product that had its roots from a great Swiss family that came to America and settled in the Shenndoah Valley in Virginia. To understand this family, you must read a Kagy passage from The Pioneer Period and Pioneer People of Fairfield County, Ohio by C.M.L. Wiseman.

THE KAGY’S OF FAIRFIELD COUNTY

The Shenndoah Valley, of Virginia, was settled largely by Pennsylvania people, both English and German speaking people. They emigrated from Berks, Lancaster and York Counties, Pennsylvania. There were Mennonites, Dunkers and Primitive Baptists among-them. From the year 1806 to 1840, in almost every year many families came from that valley to Fairfield County. Samuel and Reverend John Wiseman, Abraham Winters, the Millers, Murphys, Ashbrooks, Beerys, Freeds and hundreds of other families all came from that splendid valley.

Of the many families referred to, none were larger or more highly respected than the Kagys. They were a hardy race, descended from hardy Swiss ancestors. But few of this large family now reside in Fairfield, for as the children grew to years of maturity, they married and either moved north to Seneca and Hancock Counties or to Marion, Cumberland and Effingham Counties, Illinois. This family produced many men of considerable prominence and ability, farmers, lawyers, doctors, ministers, teachers and merchants.

Honorable John Seitz, of Seneca County, was the son of Lewis Seitz, whose wife was a Kagy.

Rudolph Kagy, a native of Switzerland, came first to Pennsylvania. From there he moved to the valley of Virginia, and lie was the founder of the family that came to the county in 1833 and settled in Rushcreek.

Aaron Kagy was born April 2, 1826. He married Eliza Mauk, of Walnut township; they now reside at McCool Junction, Nebraska. For five years, beginning in 1850, Aaron Kagy was the largest and busiest stock buyer in Ohio; he drove his cattle in lots of 100 to Baltimore, Maryland. He failed in 1854 and involved many of his friends. His father and father-in-law endorsed for him and their farms were sold to pay his debts.

Mary Kagy, the oldest daughter, was born May 11, 1828. She married Jacob M. Walters and with him moved to the West; she now lives, a widow, in Webster City, Iowa.

John M. Kagy was born April 8, 1834; he married Mary P. Beckwith. He has lived in many parts of the West and now resides at Boseman, Montana.

Rebecca Kagy was born March 4, 1836. Her first husband was Benjamin Walters, brother of Jacob M., husband of Mary. Her second husband is Moab P. Trumbo, to whom she was married February 26, 1856. They reside on a fine farm near Ottawa, Illinois. The three daughters of Lewis B. Kagy are good women and exceptionally good looking. They were belles of Walnut township.

Aaron Albert Kagy was born on April 2, 1826 in Fairfield County, Ohio. As noted earlier, Kagy was the largest and busiest stock buyer in Ohio and he drove his cattle in lots of 100 to Baltimore. He failed in business in 1854 and had to be rescued by family members to pay his debts.

“he drove his cattle in lots of 100 to Baltimore, Maryland”

At 34 years old, Aaron A. Kagy resurfaces as a grocer in Mason, Effingham County, Illinois. The grocery business would play a big part in the Kagy family. In 1866, he is listed as a retail liquor dealer in a U.S. IRS Tax Assessment List. The business is called Walters & Kagy and they sold wholesale liquor in Ottawa, Illinois. His partner was his brother-in-law, Jacob M. Walters whose wife was his sister, Mary Kagy. The Bottled in Illinois book says that John M. Kagy was a partner with Jacob M. Walters. This may be true. I can not conform. In any event, both Kagy’s and Walters next have some misfortune in 1867 as they lose their grocery store and rectifying establishment to fire (see clipping below). Fortunately, the building was wholly covered by insurance.

This is where it gets cloudy for a moment. In 1869-1870, Kagy & Trumbo is listed as grocers in Ottawa, Illinois with J.M. Kagy. This is according to Bottled in Illinois.

Ottawa, which is a bit southwest of Chicago, was the site of the first of the Lincoln-Douglas debates of 1858. During the Ottawa debate Stephen A. Douglas, leader of the Democratic Party, openly accused Abraham Lincoln of forming a secret bipartisan group of Congressmen to bring about the abolition of slavery.

In 1870, Aaron A. Kagy, age 44, lists “no business” and lives in Ottawa, La Salle, Illinois according to the United States Federal Census. John M. Kagy is listed as a farmer in the same census. Rebecca Kagy, Aaron’s and John’s youngest sister married Benjamin Walters, brother of Jacob M. Walters, who, as stated above was the husband of Mary. Her second husband is Moab P. Trumbo. So they are all or related to the grocery business in some respect or another.

Then comes the advertisement at the top of the post from 1871 for Kagy’s Superior Stomach Bitters. We must assume that this is Aaron’s baby. He was the older brother and his name is on the advertisement. It was probably sold in the Kagy grocery store. Aaron Cagy died in 1909. 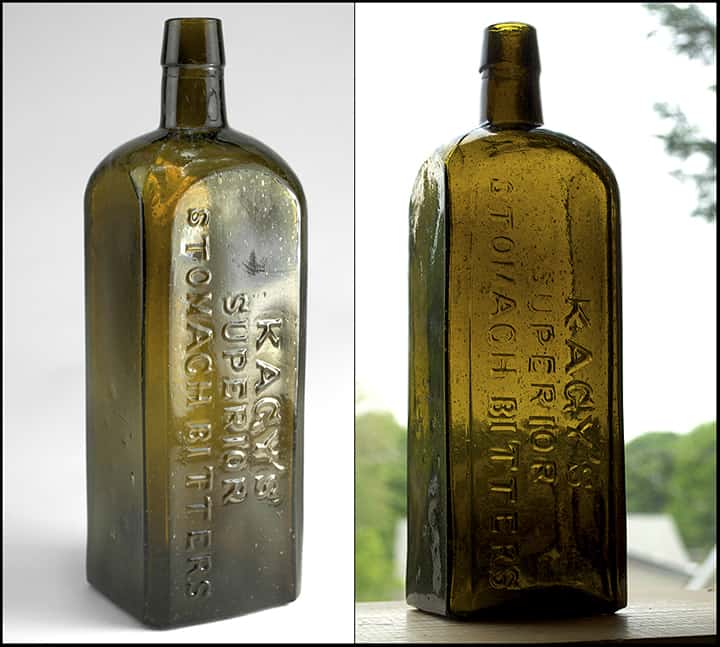 Ferdinand Meyer V is a native of Baltimore, Maryland and has a BFA in Fine Art and Graphic Design from the Kansas City Art Institute and School of Design. Ferdinand is the founding Principal of FMG Design, a nationally recognized design consultation firm. Ferdinand is a passionate collector of American historical glass specializing in bitters bottles, color runs and related classic figural bottles. He is married to Elizabeth Jane Meyer and lives in Houston, Texas with their daughter and three wonderful grandchildren. The Meyers are also very involved in Quarter Horses, antiques and early United States postage stamps. Ferdinand is the past 6-year President of the Federation of Historical Bottle Collectors and is one of the founding members of the FOHBC Virtual Museum.
View all posts by Ferdinand Meyer V →
This entry was posted in Advertising, Bitters, History, Liquor Merchant, Medicines & Cures and tagged Aaron, Albert, bitters, Fairfield, Grocery, Hensen, illinois, John, Kagy, Ottawa, Rudolph, Stomach, Superior, Tim, Trumbo, Walters. Bookmark the permalink.