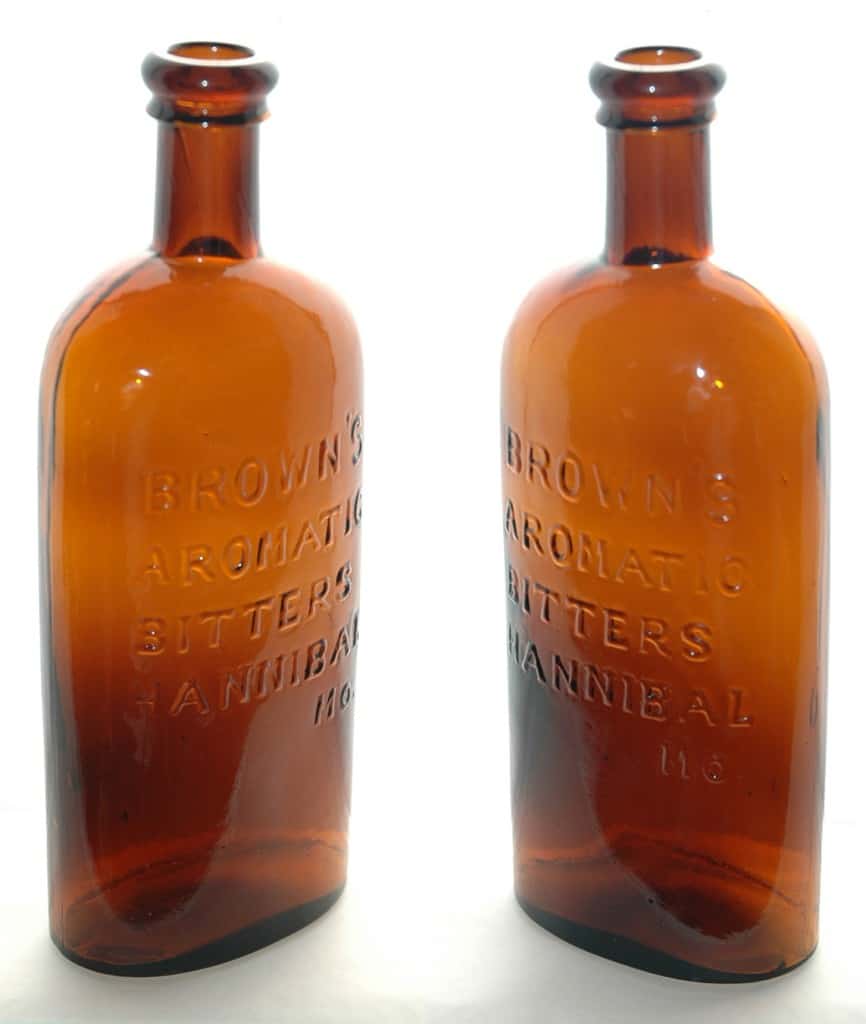 [This post was inspired by Tim Henson from Missouri] 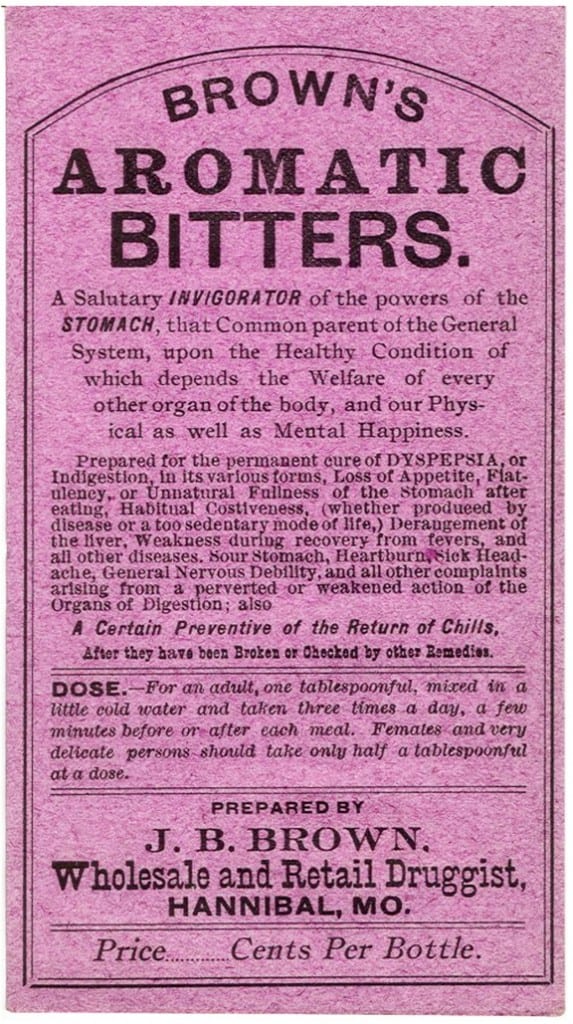 A very suspicious label card I purchased off of eBay for .99 cents a few years ago for Brown’s Aromatic Bitters.

Jim Hagenbuch with Glass Works Auctions sure knows how to tug at the heart-strings (and pull at the purse strings) as when he auctioned off the extremely rare, Brown’s Aromatic Bitters from Hannibal, Missouri in Auction #87 back in October 2009. He wrote under the bottle description, “From the Mississippi River town of Hannibal, Missouri, birthplace of Samuel Langhorne Clemens, better known to most people as Mark Twain.” Now that is pretty cool, a bottle from Hannibal, Missouri. I wonder if Brown knew Clemens? 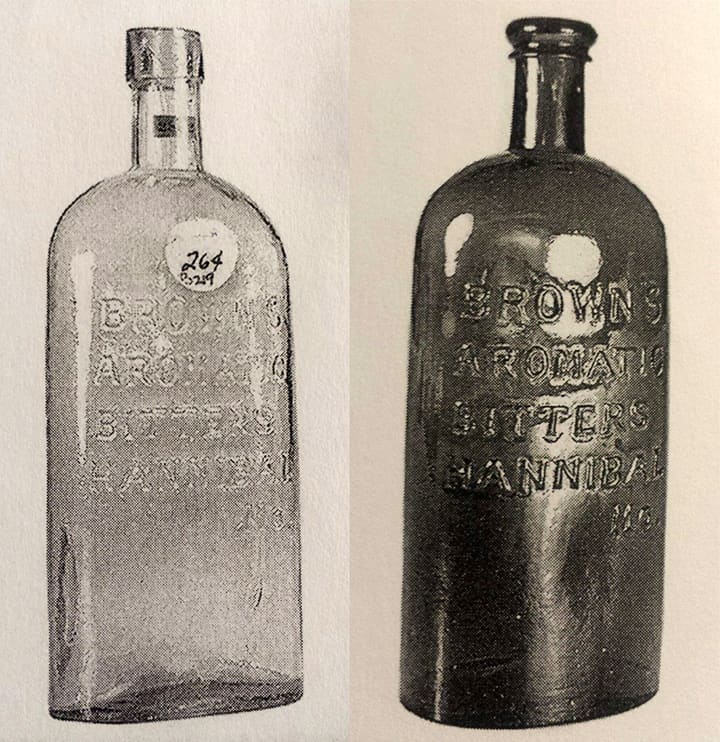 Well, I did end up winning the bottle, as Jim’s methods seem to work. The bottle is extremely rare and unlisted in amber. It is 8 3/4″tall, has a smooth base and has an applied double collar mouth. Apparently in 2002, Glass Works Auctions sold an aqua example for $900. You can see my catalog page below with the example. I make an 8 1/2″ x 11″ page for all of my bottles. Digitally stored, printed and inserted in large 3-ring binders. 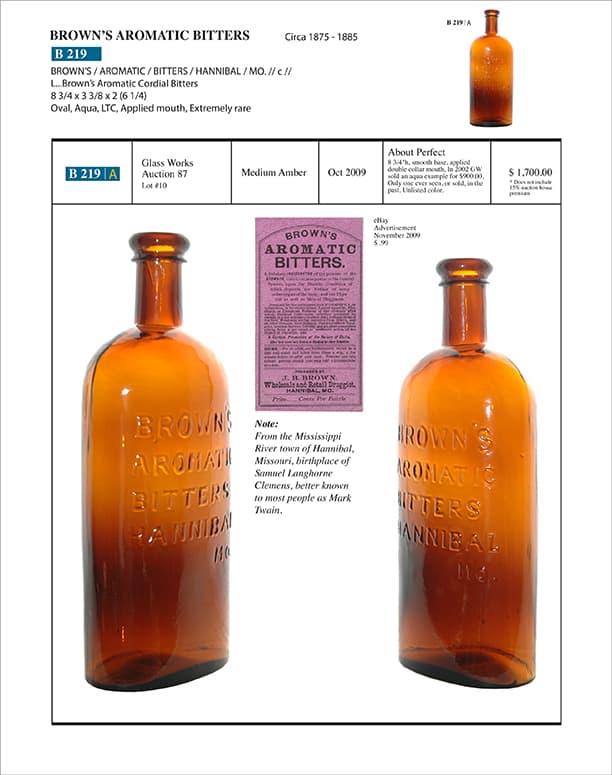 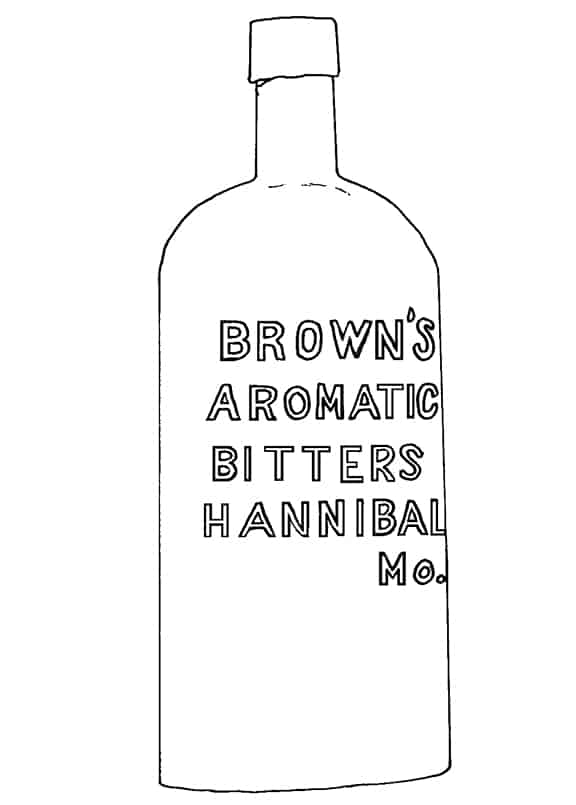 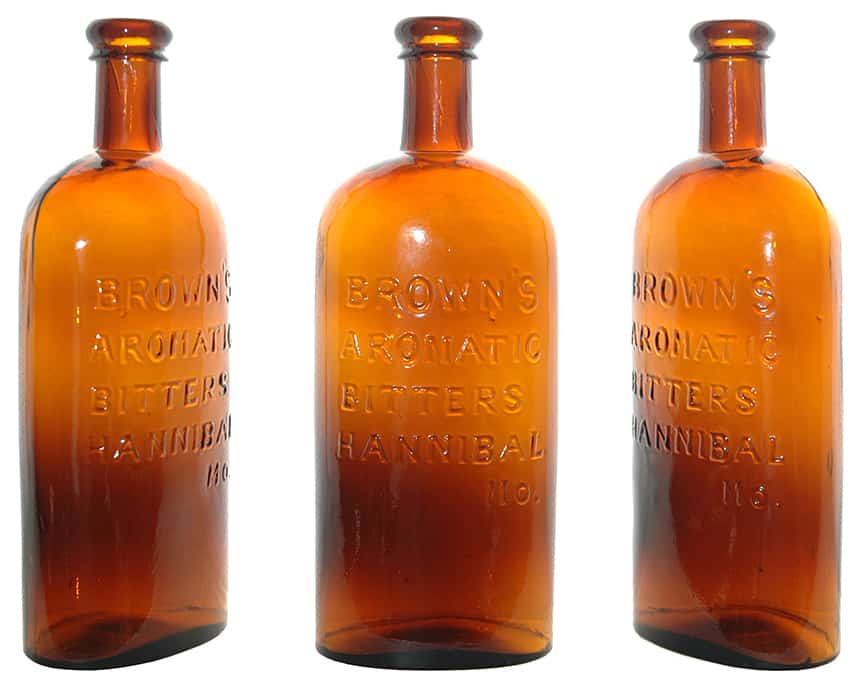 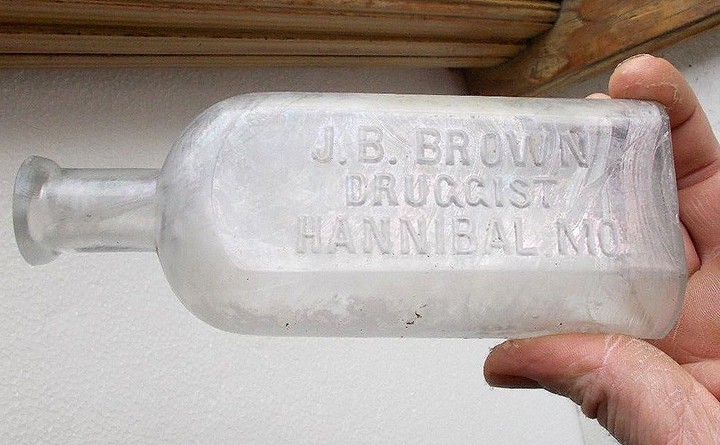 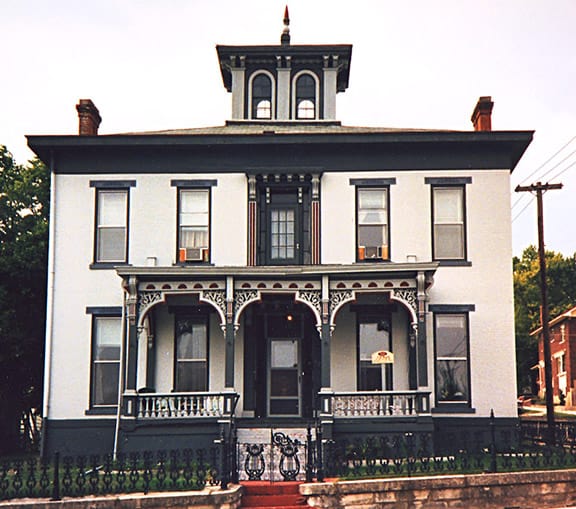 This classic Italianate villa with cupola is the J.B. Brown house, built in 1870. He built 121 South Fifth Street just before the Civil War and 321 North Fourth Street about ten years later. 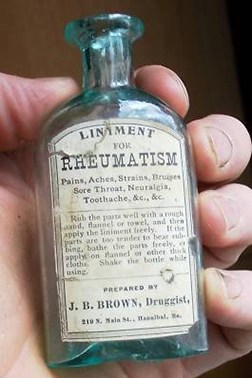 Pontiled and labeled Liniment for Rheumatism by J.B. Brown, Druggist

James Burket Brown was a successful druggist and home builder in Hannibal, Missouri. He life story reads like a Horatio Alger story, you know, “rags to riches” as he was born from a farmer named William Woody Brown (father James Brown and wife Elizabeth Hubbard Brown) who came to Missouri in 1832 from Kanawha County, Virginia. They arrived at the Port of Scipio in Marion County, Missouri, on 6 April 1832 on the Herald, a steamboat, which plied regularly between the south and Galena, Illinois. He brought four sons, James Burket Brown, John Henry Brown, Marion Francis Brown and William Lawrence Brown. They purchased land in Ralls County south of Hannibal and they constructed a home and other buildings of logs. It was here that William Woody Brown died in 1845, along with his parents. The seeds of the other browns were firmly planted. 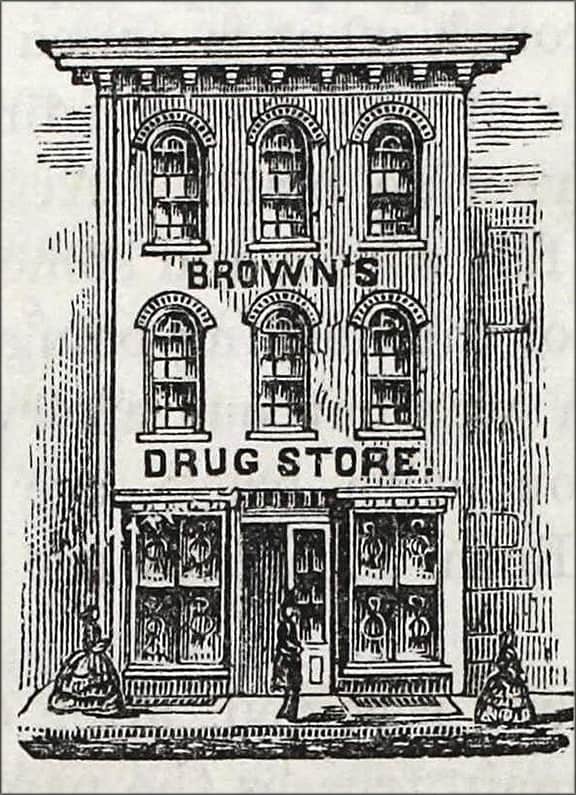 James worked from a very young age until he and two of his brothers, Marion Brown (who would become a physician in Hannibal) and William L. Brown, decided to go to California during the Gold Rush. They each came home with about $1,000 and they were flush to start new lives in Hannibal. James invested his income by buying out an old drug firm and successfully developed it so that he was able to build his own store and building in 1848 on North Main Street. They were wholesale and retail druggists and dealers in drugs, medicines and chemicals along with perfumery, window glass, glassware and many other fancy items of the day. They were also advertising pure wines and liquors for medicinal purposes. I like that, for medicinal purposes. That way they could sell the Brown’s Aromatic Bitters.

James also served as mayor from 1882 to 1885 and again in 1888 and founded a family that was prominent for several generations.

The Brown family took a strong stand for the Confederacy during the war between the states. The family, fearing acts of plunder by marauding troops, hid articles of value in a small cave which had been created by removal of stone for building purposes. A Confederate flag was made from silk petticoats by Sarah Brown Carstarphen, her mother, Frances Hubbard Brown, and the wives of Dr. Marion F. (Eleanor Virginia Carter) and William L. Brown. In defiance of Union soldiers who were occupying Hannibal, Dr. Marion Brown (Sarah Brown Carstarphen’s brother) displayed this flag on a wire which was extended from his office on North Main Street next to the J.B. Brown drug store. Dr. Brown persisted in saluting it whenever he passed it, in spite of the warnings of his friends. He did not fear being shot for this act, as he was the only doctor left in the vicinity. Finally, realizing that the flag would be confiscated as were other Confederate flags in the town, it was hidden. It was found in 1925 by the owners of the old J. B. Brown home at Fifth and Church Streets. It had been wrapped in paper, and a ball of twine had been wound around it. Bessie Brown placed this historic flag on display in the Mark Twain Museum on Hill Street. 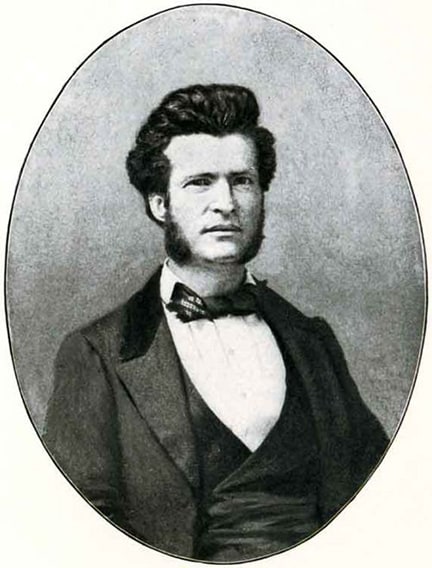 It was reported that James Burket Brown, went to school with Samuel Clemens in the old log house in what is now “the park” in Hannibal.

J.B. Brown retired after sixty years of service in the drug business and turned his business over to his son, Albert S. Brown. He was, for fifty years, in the same building without any change of firm. He died in 1915. 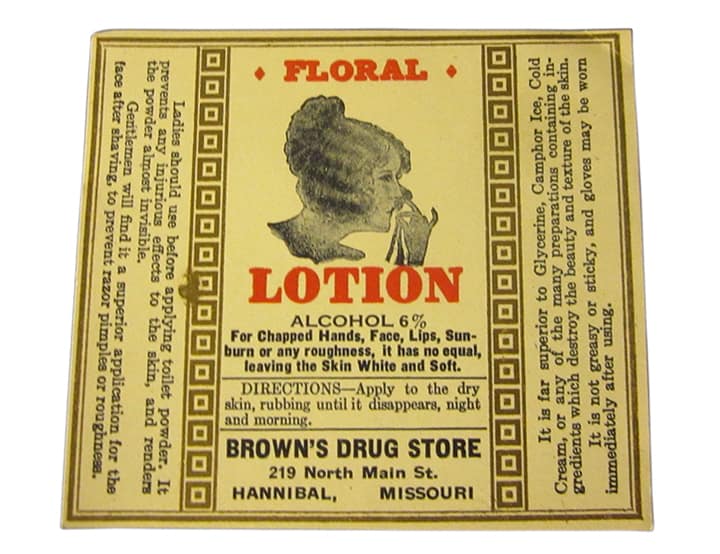 Floral Lotion label. Probably 1910 or so. 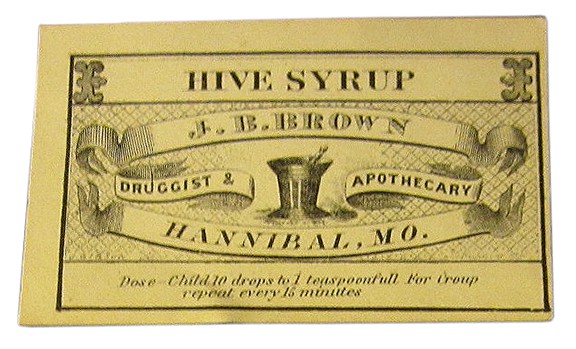 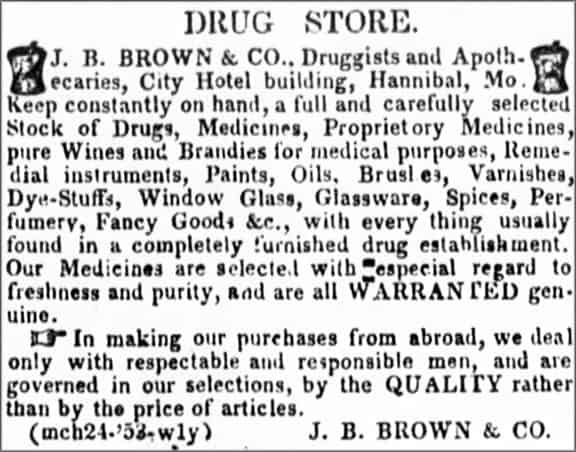 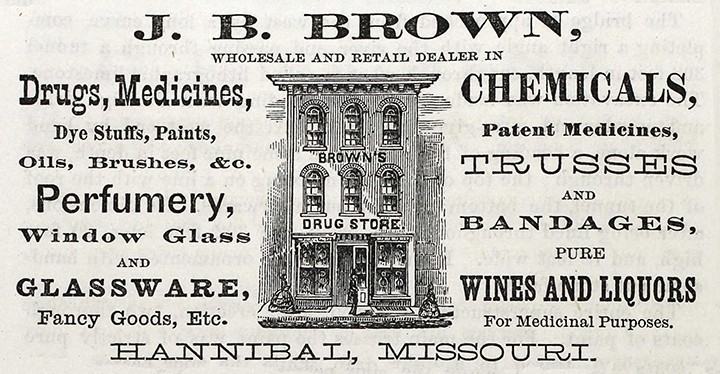 J. B. Brown advertisement – History of Hannibal and City Directory 1871-72

1907: Veteran pharmacist, J.B. BROWN retires, Hannibal, Missouri, now eight years of age, after sixty years of service in the drug business, has retired from active work and turned his business over to his son, Albert S. Brown. He was for fifty years in the same building without any change of firm. – Meyer Brothers Druggist, C.F.G. Meyer, 1907

Ferdinand Meyer V is a native of Baltimore, Maryland and has a BFA in Fine Art and Graphic Design from the Kansas City Art Institute and School of Design. Ferdinand is the founding Principal of FMG Design, a nationally recognized design consultation firm. Ferdinand is a passionate collector of American historical glass specializing in bitters bottles, color runs and related classic figural bottles. He is married to Elizabeth Jane Meyer and lives in Houston, Texas with their daughter and three wonderful grandchildren. The Meyers are also very involved in Quarter Horses, antiques and early United States postage stamps. Ferdinand is the past 6-year President of the Federation of Historical Bottle Collectors and is one of the founding members of the FOHBC Virtual Museum.
View all posts by Ferdinand Meyer V →
This entry was posted in Apothecary, Auction News, Bitters, Holiday, Medicines & Cures and tagged Aromatic, bitters, Brown's, Burket, Clemens, Druggist & Drugstore, drugs, Hannibal, Henson, J.B. Brown, James, Langhorne, Mark, Medicines, Missouri, retail, Samuel, Tim, Twain, wholesale. Bookmark the permalink.